The Canadian International Auto Show, scheduled for the middle of the February, was 1600km removed from my home in Nova Scotia. The perfect trip, then, with which to refute a few stereotypes.

There are more than a few cars today which suffer from unfair stereotypes. Mazda’s fantastic MX-5 is unfairly maligned by some as just a “cute little car”. The Audi TT, in RS form, will easily keep pace with a Corvette Stingray but is seen by many as a car for those who’d rather lark about at the beach instead of carve corners at the racetrack.

And then there’s the Prius.

Toyota’s hybrid hatchback is currently in its fourth iteration, celebrating its 20th anniversary of its debut in Japan. Setting the bar for hybrid fuel economy, it didn’t take long for the Prius image to get inextricably linked with one of smugness, as it often seemed that Prius owners pontificated to whomever would listen about their contributions to efficient driving and saving the planet. Once celebrities started buying them – Harrison Ford, Cameron Diaz, Jennifer Aniston, and Leonardo DiCaprio have all owned a Prius at some point – the stereotype was set.

Or is it? Back in November, I set out with a plan to prove that hybrid vehicles are useful in situations beyond navigating the downtown core of large cities and handling the morning commute. It is true that hybrids like the Prius do get better fuel economy in low-speed conditions than on the highway, as their battery packs allow for some electric-only driving at low speeds, but surely they can also acquit themselves on the highway in the middle of a snowy February, right?

The Canadian International Auto Show, scheduled for the middle of February, was 1600km removed from my home in Nova Scotia. The perfect trip, then, with which to refute a few stereotypes. 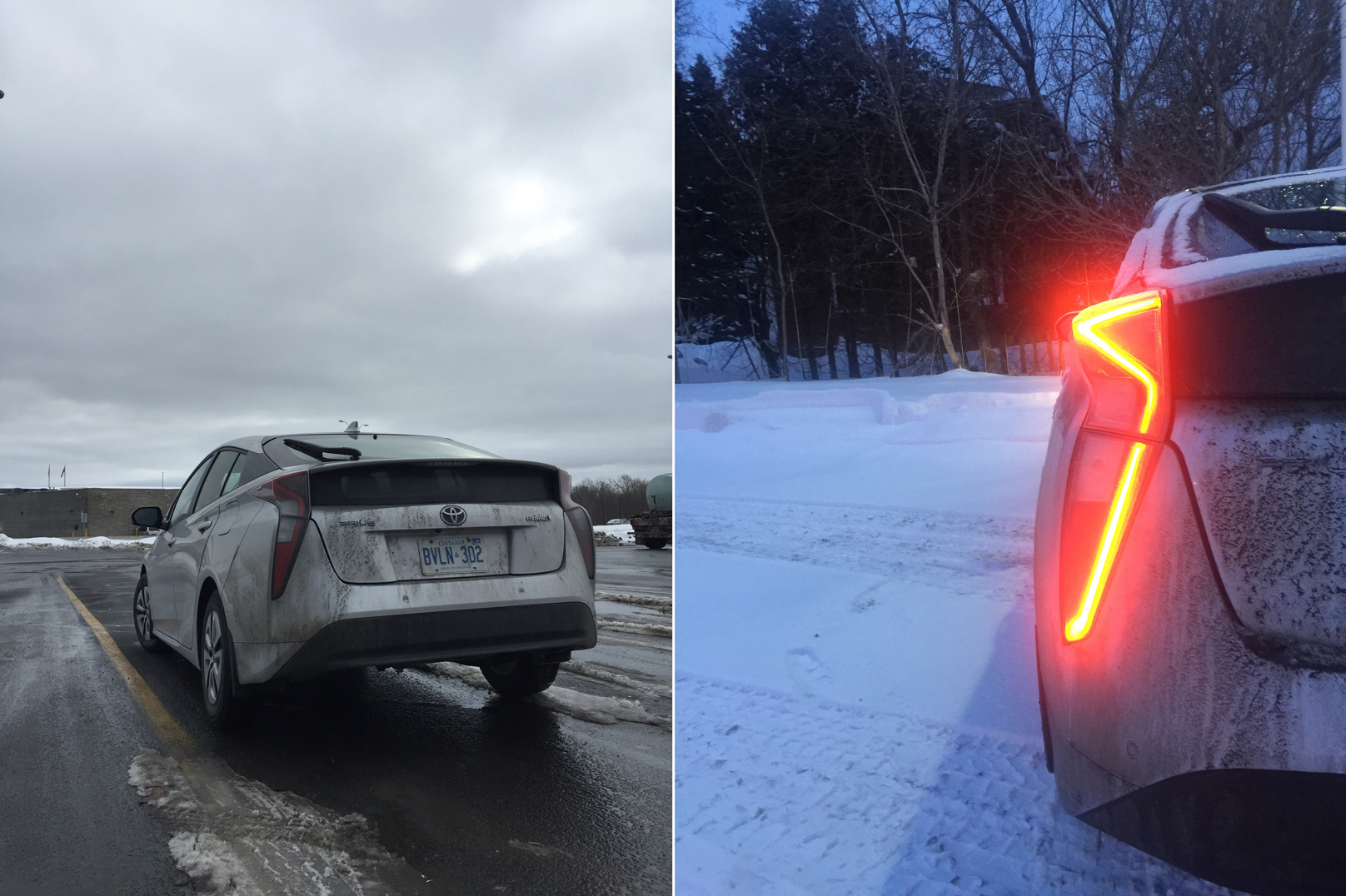 If it was snowy conditions we sought in which to test the Prius, then the weather forecaster did not disappoint. The day before I was scheduled to leave, Old Man Winter saw fit to dump nearly 70cm of the white stuff from the sky, most of it landing squarely in my driveway. Clearing a path to the road for my planned 7:00am departure was pointless; high winds refilled my shovelling efforts almost instantly.

Fast forward to the next morning, with the weather clearing up and snow plow operators doing their best to clear the roads, I hit the highway precisely three hours behind schedule. Shod with Yokohama IceGuard winter tires, the front-drive Prius clawed its way over a snow-packed Trans Canada Highway.

Stereotype #1, then, the assertion that a hybrid is only fit for in-city driving: Busted. 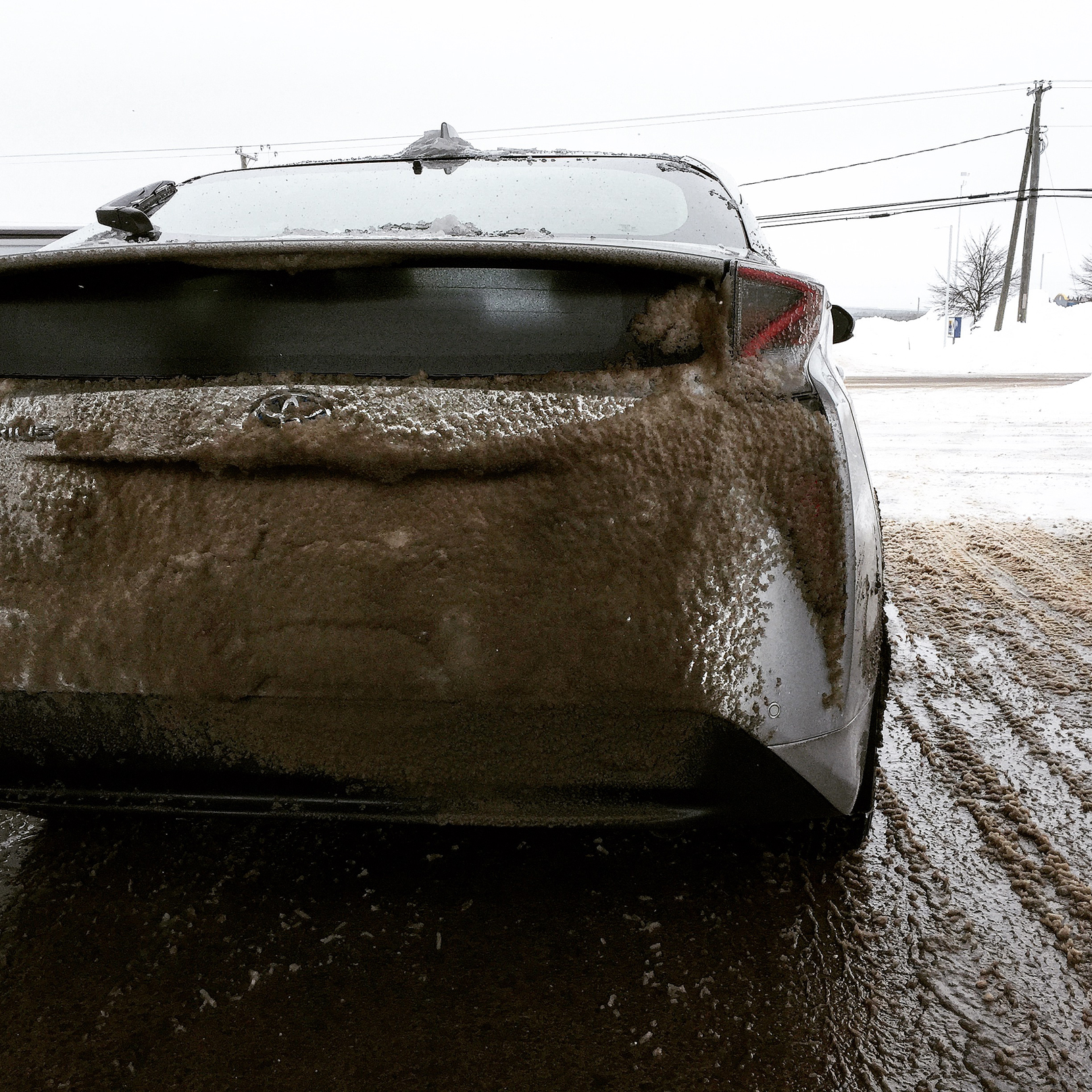 Natural Resources Canada, the government body tasked with measuring the fuel economy of new cars on sale in Canada, ranked the 2017 Prius as the country’s most efficient mid-size car for model year 2017 at a scant 4.5L/100km in mixed highway and city driving. Its 1.8-litre, four-cylinder gasoline engine makes 95hp and runs on regular fuel while working in concert with the hybrid system to create a peak combined power output of 121hp. Toyota calls it Hybrid Synergy Drive.

As one would expect in a vehicle whose raison d’etre is one of economy and green motoring, The Prius conserves energy even when it’s slowing down. The regenerative brake system switches the motor into a generator to recover the wheels’ kinetic energy as electrical power, storing it in the hybrid battery.

For 2017, the Prius’ Hybrid Synergy Drive combines the output of its gasoline engine and two motor/generators, shuttling power to its front wheels through an electronically controlled continuously variable transmission (CVT). Shift-by-wire technology, which uses electric signals to transmit shift operations, is controlled by an odd dash-mounted shifter which sprouts from beneath the climate controls like an errant blue dandelion.

Spread out before the driver is a buffet of digital information, with the dashboard mounted centrally rather than the traditional spot right ahead of the steering wheel. This creates some interesting ergonomics, not the least of which are an array of warning lights which are actually closer to the passenger than the driver. A large touchscreen in the centre stack, controlling audio and nav functions, will be familiar to any 2017 Corolla driver. 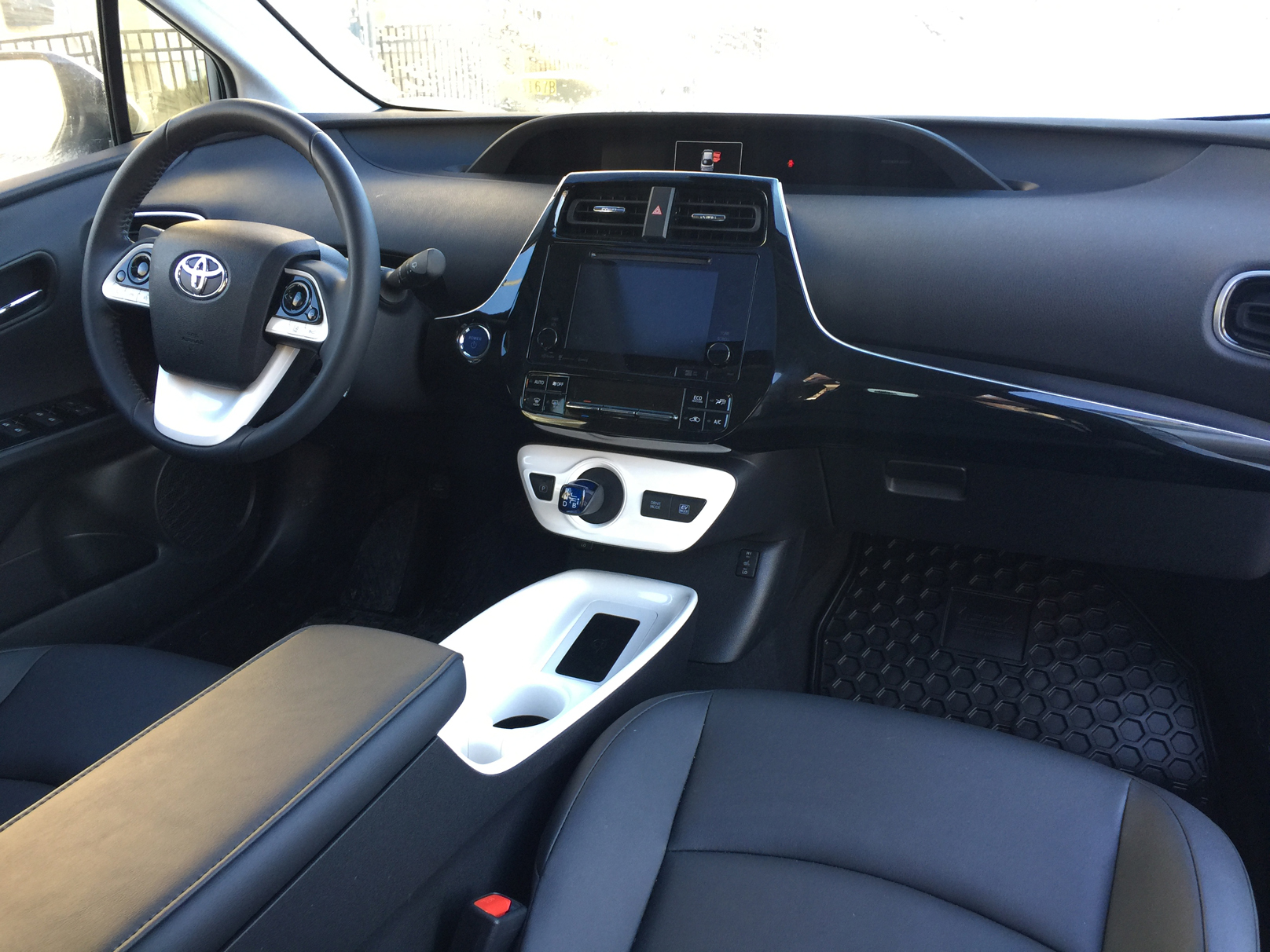 The wind-cheating exterior shape of the Prius is, like sushi or old cheese, definitely an acquired taste. Its convoluted assemblage of sharp angles and flat surfaces assure drivers they won’t lose it in the parking lot. I will commend Toyota for allowing the wind tunnel to dictate their styling choices, then working some creative styling cues into the car. The soaring, lightsabre taillights drew plenty of stares and the vehicle’s 0.24 coefficient of drag (Cd) is among the lowest of current production passenger cars.

The Prius’ large hatchback is comprised mostly of glass, angling down from the roof at a rakish angle only to drop off more quickly than a lying politician’s approval rating. At first blush, the rear wiper doesn’t seem to clear much real estate but in reality it had no problem keeping up with the constant assault of slush and road grime.

Passing through Montreal, whose drivers displayed a terrifying mix of apathy and aggression, the Prius did a good job of powering itself through traffic, albeit with a few firmer-than-normal prods of the gas pedal. When pushed, the continuously variable transmission kept the engine firmly in its upper rev range. At a less frantic pace, the Prius was a quiet and comfortable road companion with the cruise control set to the speed limit.

This dispels Stereotype #2, which holds that hybrids require sacrifice. At no point in the trip did I feel I was giving up anything in terms of comfort or convenience when compared to a similarly sized non-hybrid car. After twelve hours behind the wheel, I pulled into a truckstop just outside of Montreal intending to take a small nap. I awoke not thirty minutes but two hours later, with a loud grinding sound shattering my metal piñata of a world, followed by the blast of an air horn that caused me to rocket upright and temporarily turn my body into the shape of a frozen L.

Turns out it started snowing heavily during my slumber and a well-intentioned snow plow operator was trying to clear the parking lot. I’m certain I awoke not looking healthy enough to be dead but the fact I could easily catch a few winks in the front seat of an eco-friendly hatchback bodes well for the long term comfort of the Prius. 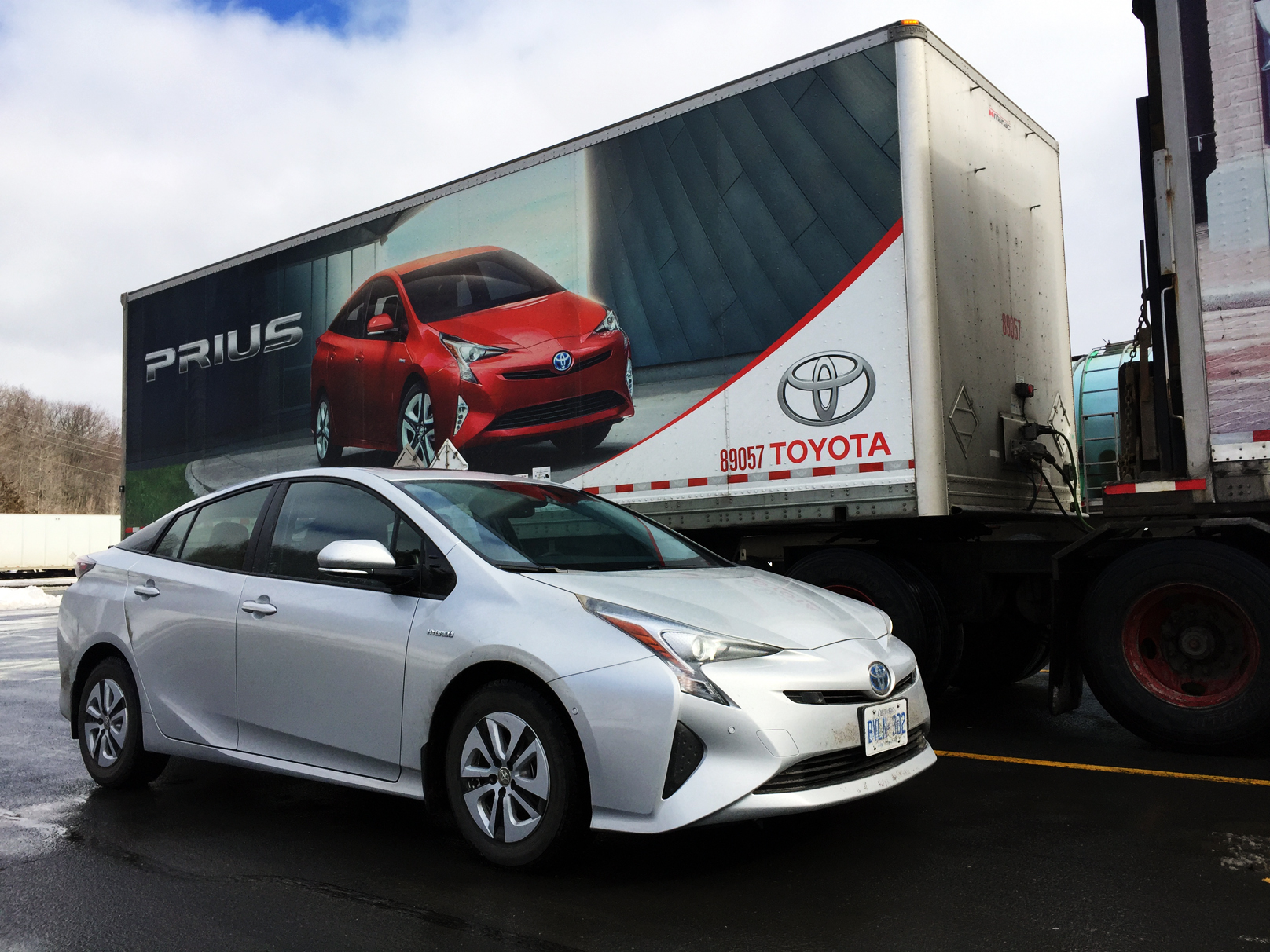 Our tester was a mid-range Technology trim level with an optional $2675 Advanced Package, delivering niceties such as rain sensing wipers, Softex (read: leather) seats, and a nifty heads-up display. The HUD was quite useful, offering a multitude of different displays and allowing drivers to view economy readouts and current road speed. Clear and animated navigation info would usurp the planet-saving admonishments when necessary.

A technological oddity in the Prius was its emergency brake. The old fashioned foot pump e-brake, rather than a modern electric unit, seemed extremely out of place in such a futuristic car, not unlike finding Jean-Luc Picard tending to a wood stove on the bridge of the Enterprise.

In Technology and Touring trims, the Prius features modern Lithium-ion batteries rather than older Nickel-Metal Hydride batteries found in the base model. Folks pondering a Prius purchase should seriously consider popping for one of those two higher trims, as a Li-ion battery is lighter and handles wild temperature swings better than its Ni-MH cousin. It also negates the argument that building a Prius involves the messy matter of mining nickel out of the earth’s crust.

By noon on the second day, 1655km and twenty-four hours after setting out from the snowy environs of Nova Scotia, I was guiding the Prius into a parking spot in a Toronto underground garage. Reflecting on the journey, I was astonished by the stereotypes it busted and the confidence with which it handled itself in atrociously snowy conditions. 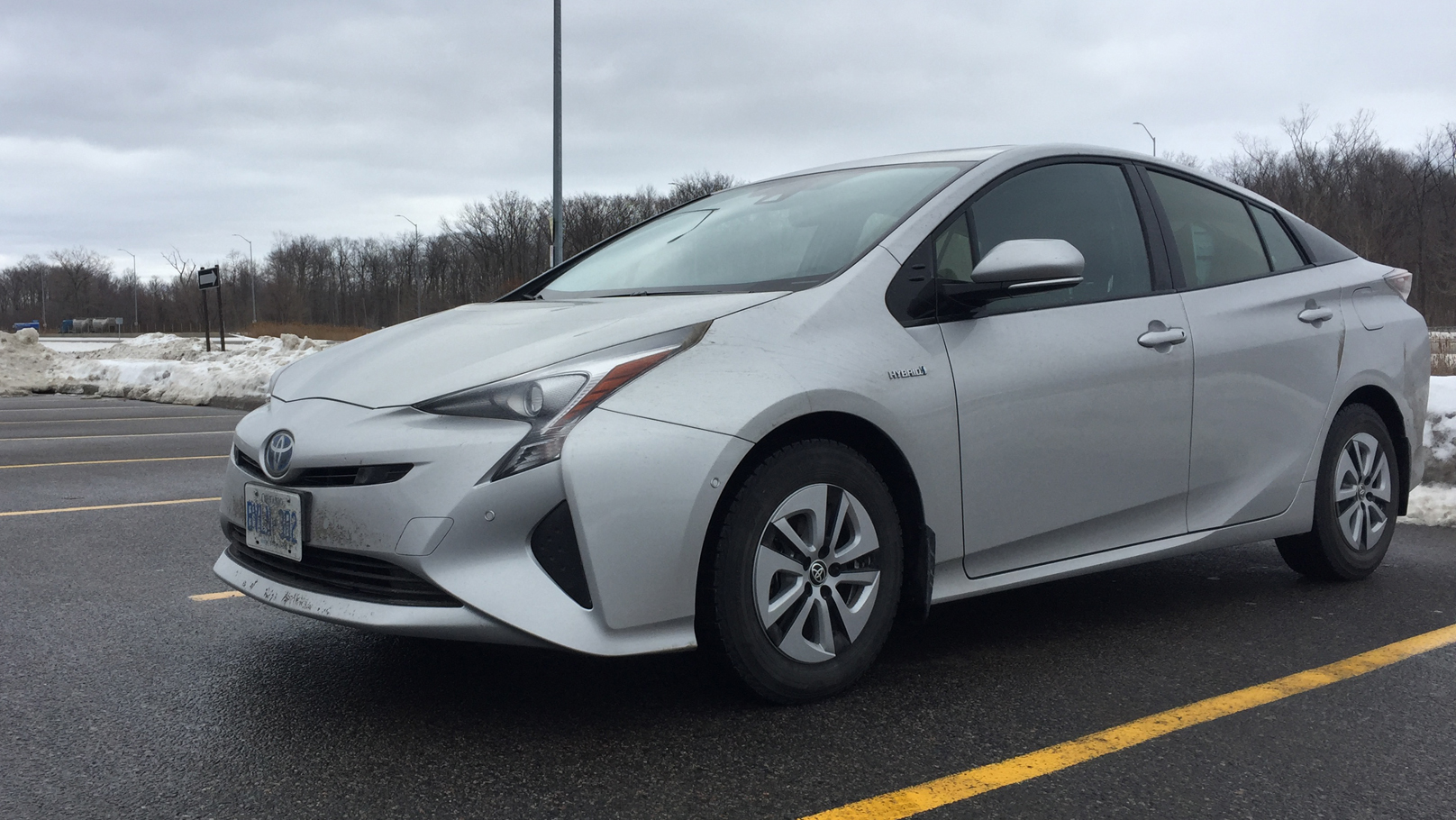 Some back-of-napkin math revealed an astounding fuel-economy average of 4.8L/100km, consuming 79L of regular fuel which dented my debit card to the tune of $84.51. That figure is, near as makes no difference, a remarkable 50mpg. I employed no hypermiling techniques and made liberal use of the defroster and heated seats. A few years ago I did this trip in a FIAT 500 Turbo, achieving an efficiency of 7.2L/100km. While comfortable, there was little chance I could’ve napped in the FIAT.

One other thing I learned on my drive: dudes in jacked-up brodozer trucks hate getting passed by a Prius. I guess some vehicle stereotypes are easier to peg than others.

FCV PLUS – A mobile Power Plant