Lined up and ready to go out on the fabled Indianapolis Motor Speedway, 2018 Dodge Challenger Hellcat Widebody model is recognized by fender flares and special 20 X 11-inch alloy wheels.

INDIANAPOLIS, IN: You’d think a set of wheel well flares wouldn’t make all that much performance difference, but they do on the 2018 Dodge Challenger SRT Hellcat Widebody.

This was in response to buyers who said they wanted more grip. 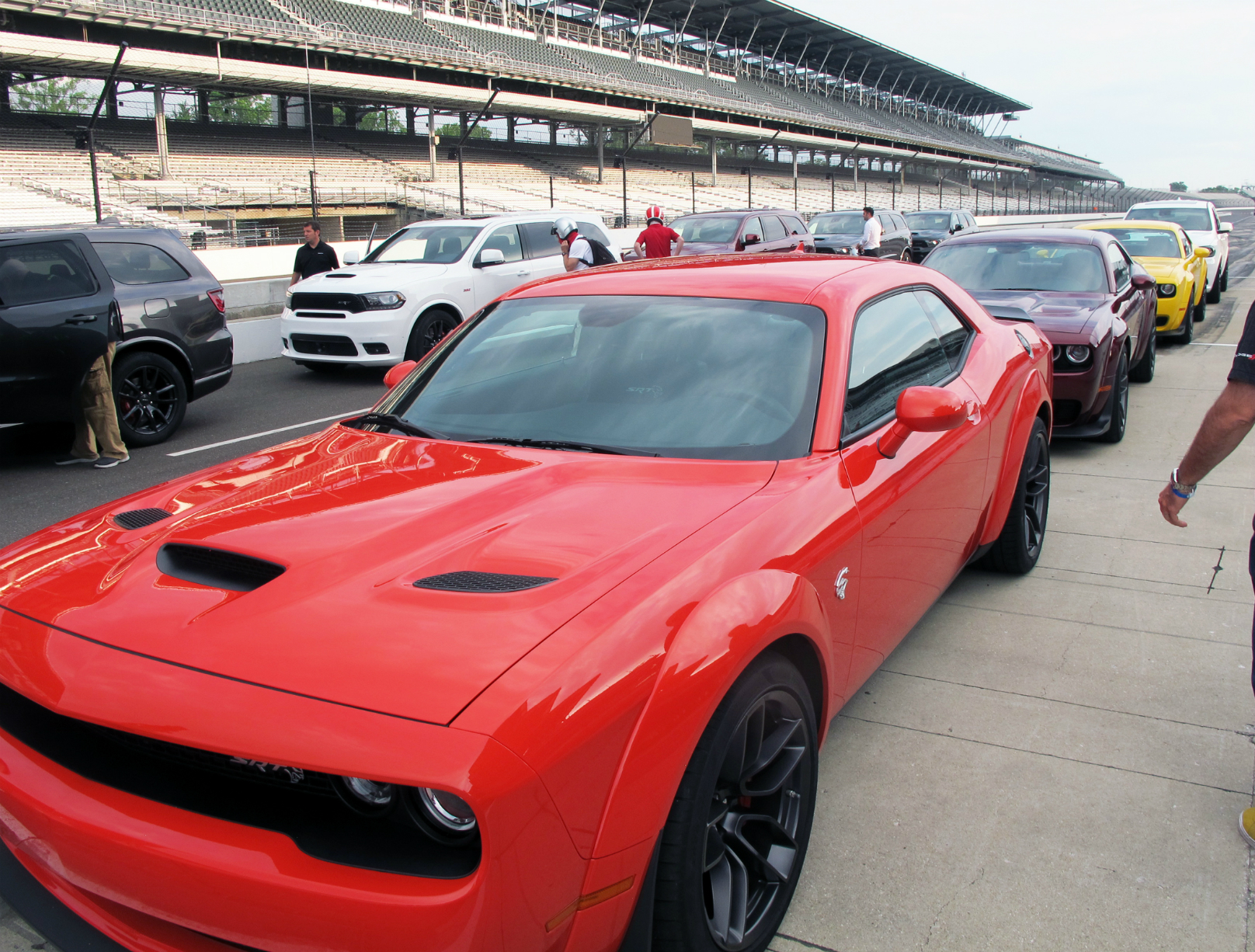 And that’s just the beginning.

These modes allow performance to be set up from transmission shift speeds, steering, traction and suspension compliance. 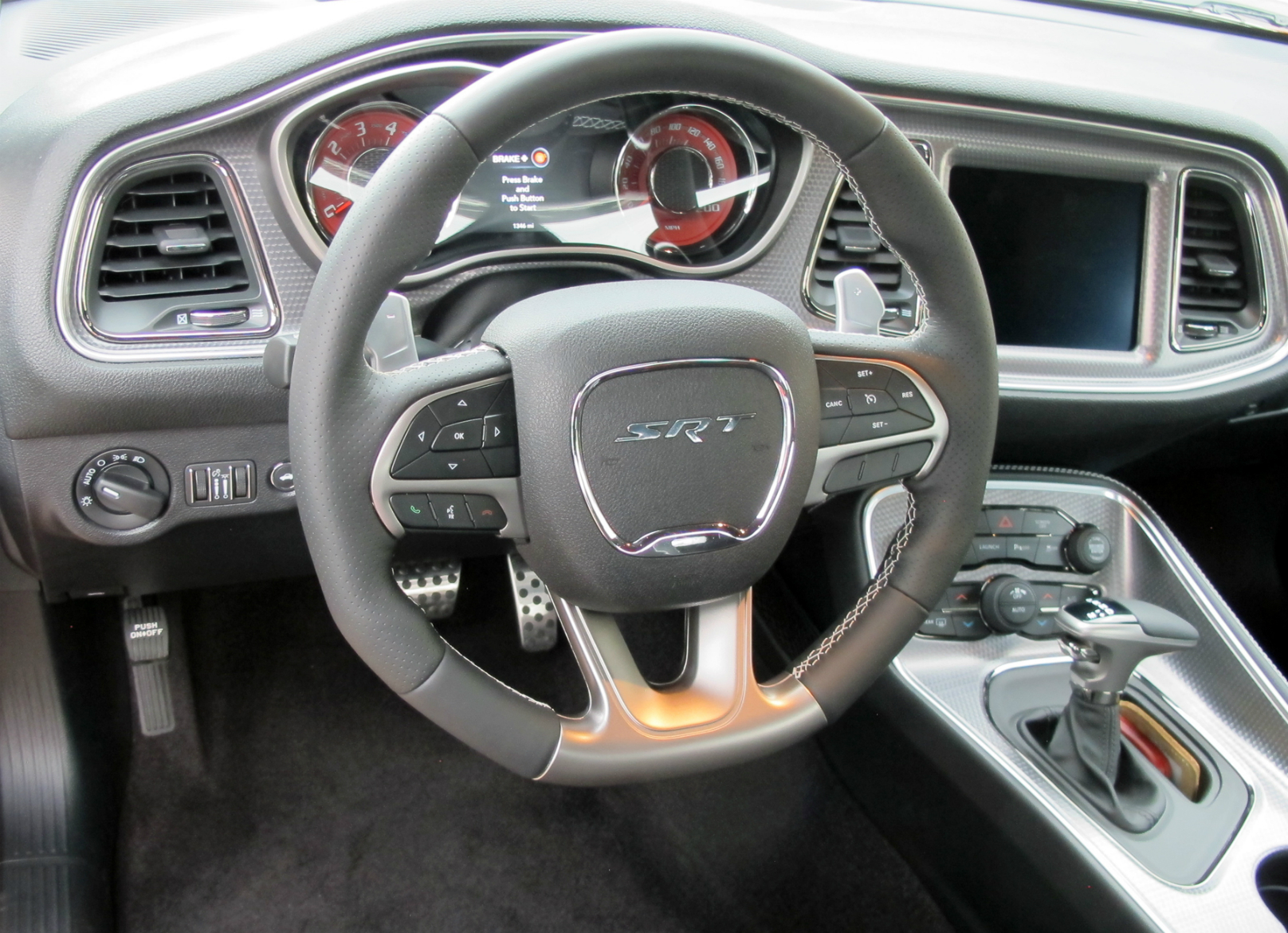 Aiding this are the “Air-Catcher” headlamps that funnel air directly to the engine through an opening in the centre of the parking lights.

At the front is fitted the same fully functional splitter from the 840 hp Dodge Challenger Demon, while at the rear, it retains the standard Hellcat spoiler.

The engine with its 650 lb/ft of torque is mated to either a six-speed heavy-duty Tremec manual or eight-speed TorqueFlite automatic transmission.

Open the hood and there’s that Hemi with a silvery supercharger housing sitting top of the engine block. And when it fires up, there’s a hollow “oomph” sound as the first gases exit the pipes at the rear and it settles down into a basso burble that lets the world know there is massive power under the hood.

The blower takes in up to 30,000 litres of air per minute using two air/coolant heat exchangers built into the supercharger housing that keeps heat under 60 C (140 F) even after hours of track time.

Because this is so effective, Dodge does not have to lower power due to cooling issues, even when the ambient temperature is as high as 38 C (100 F).

The 2018 Widebody was previewed to the media along with the 2018 Dodge Durango SRT at the fabled Indianapolis Motor Speedway, where there was a track set up with an infield course that exited onto the main straightaway. 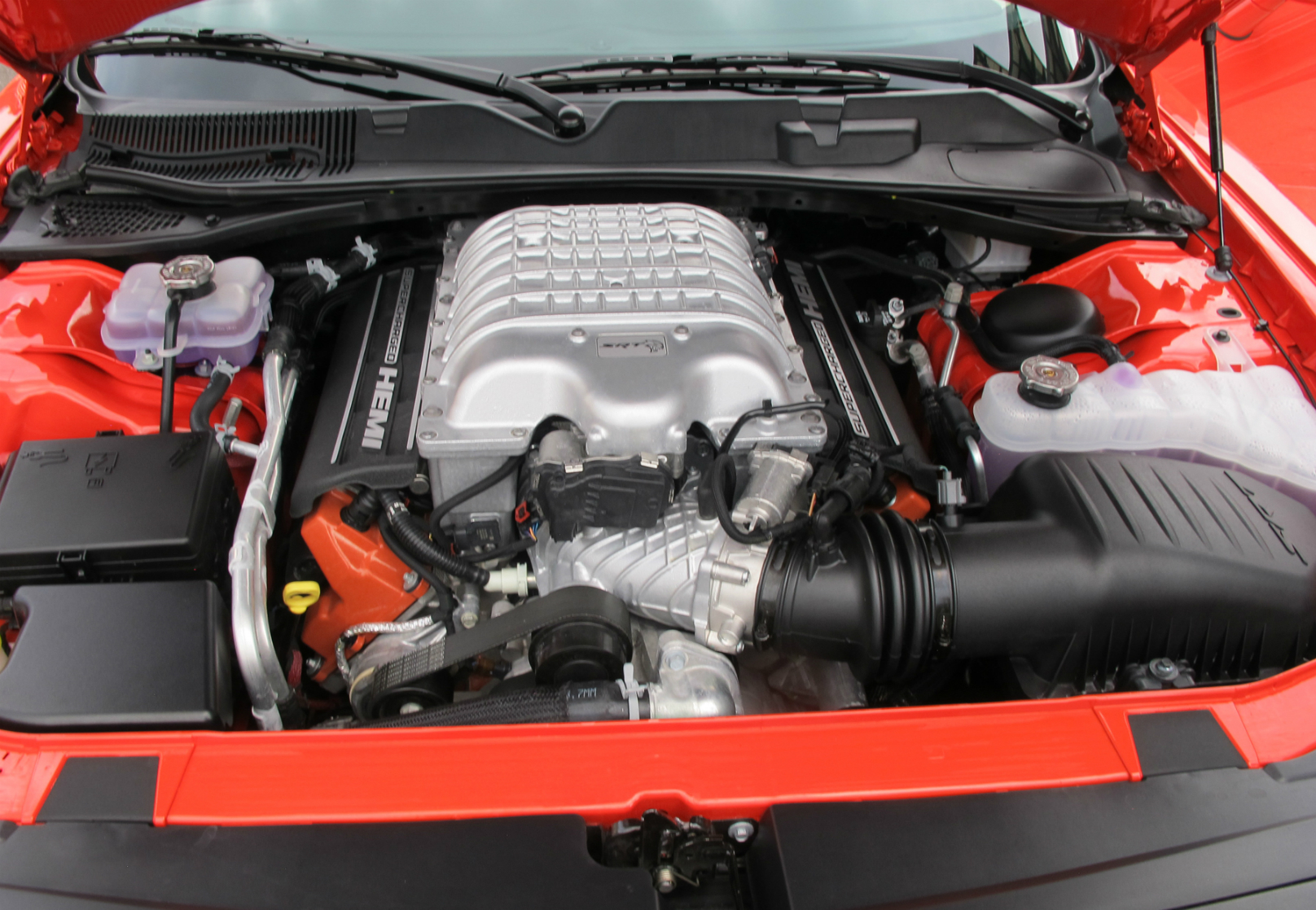 After some exploratory laps with the instructor onboard, you built up speed and familiarity with the layout before being let out there on your own.

Like the Durango SRT and Dodge Demon, it is possible to enter a wide range of performance and individual settings under “Track”.

You have to see the Widebody rocketing down Indy’s main straight at about 150 mph before hitting the brakes, down shifting with the paddles with great trailing explosions from the automatic throttle “blipping” to believe it.

But from that speed, the next challenge was to get down to about 60 mph and cut through a tight corner into the infield. 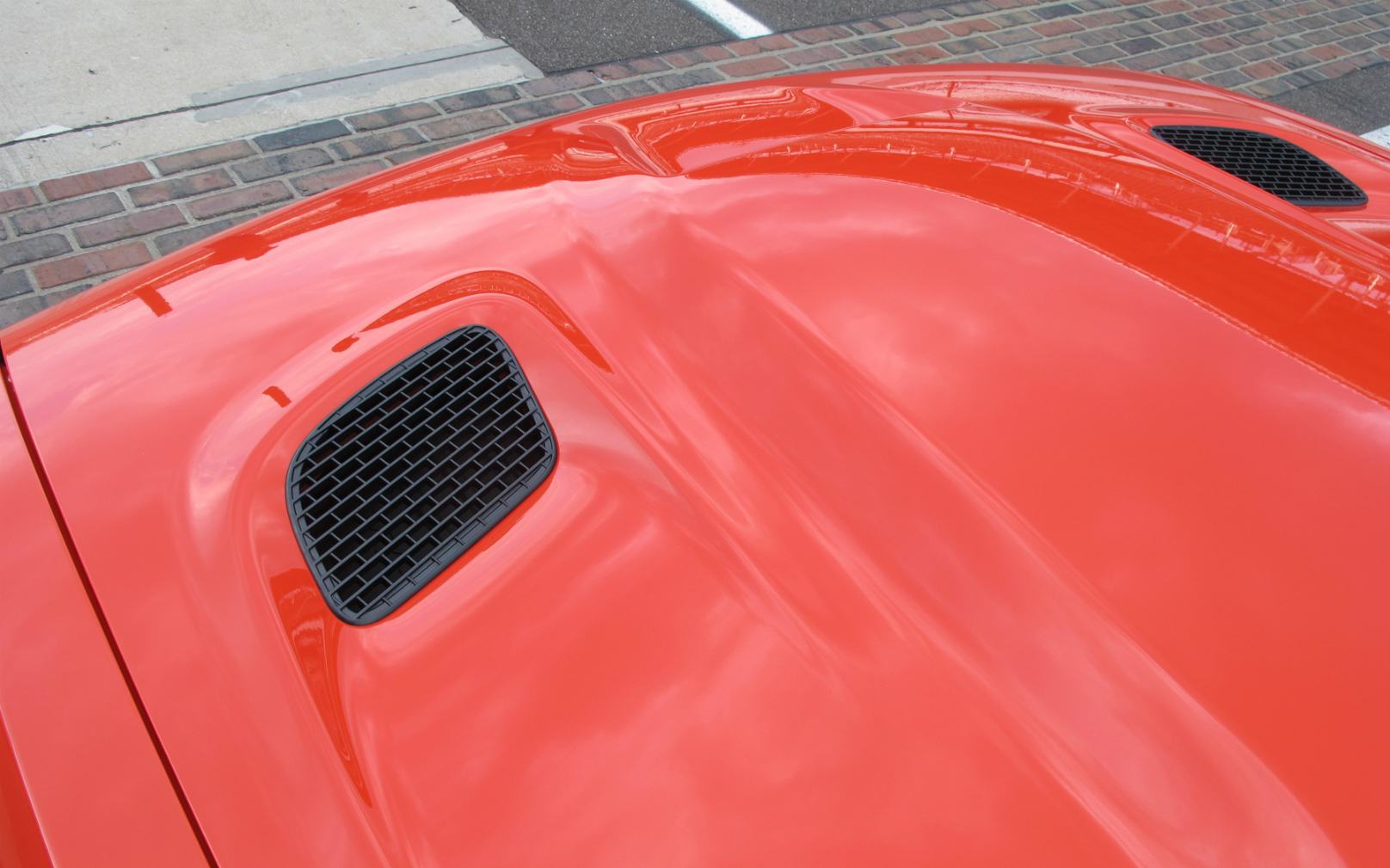 All this massive slowing is accomplished by standard Brembo two-piece, 15.4-inch vented rotors with six-piston calipers.

The cabin is tight with body hugging sports seats. The first thing you notice is the speedo, which will read up to 340 km/h on Canadian models with matching tach on the left with really big numbers that you can take in at a glance.

Next, the heated, flat bottom SRT steering wheel, plus the SRT Laguna leather sports seats with embossed Hellcat logo ad to the panache.

The many SRT “Performance Pages” for the various setups, are found in the 8.4-inch centre stack Uconnect navigation/infotainment system.

There are other contenders such as the Shelby Mustang GT350 and Camaro ZL1 out there, but for pure, unadulterated power to the pavement, nothing quite equals the 2018 Dodge Challenger SRT Hellcat Widebody. 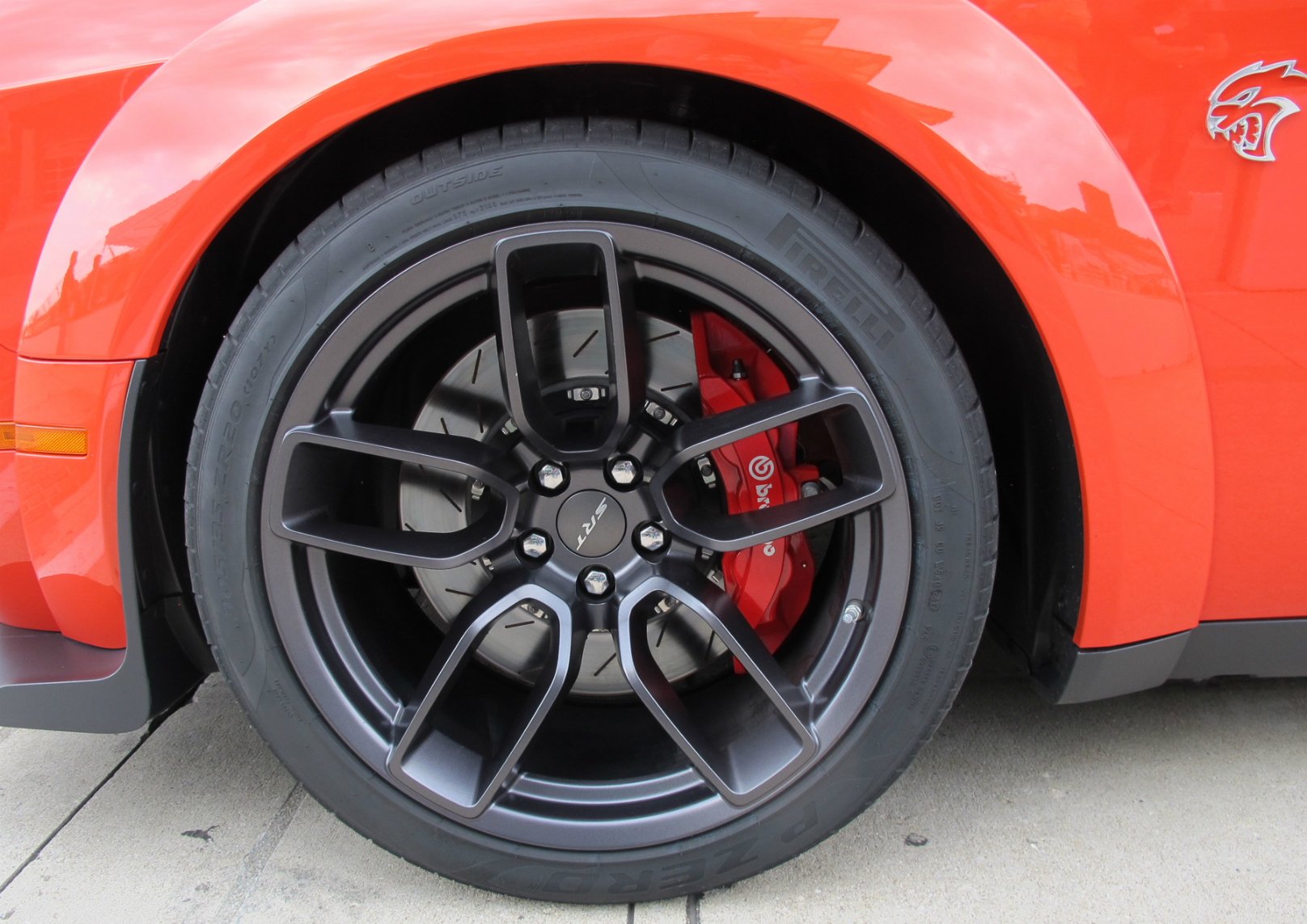 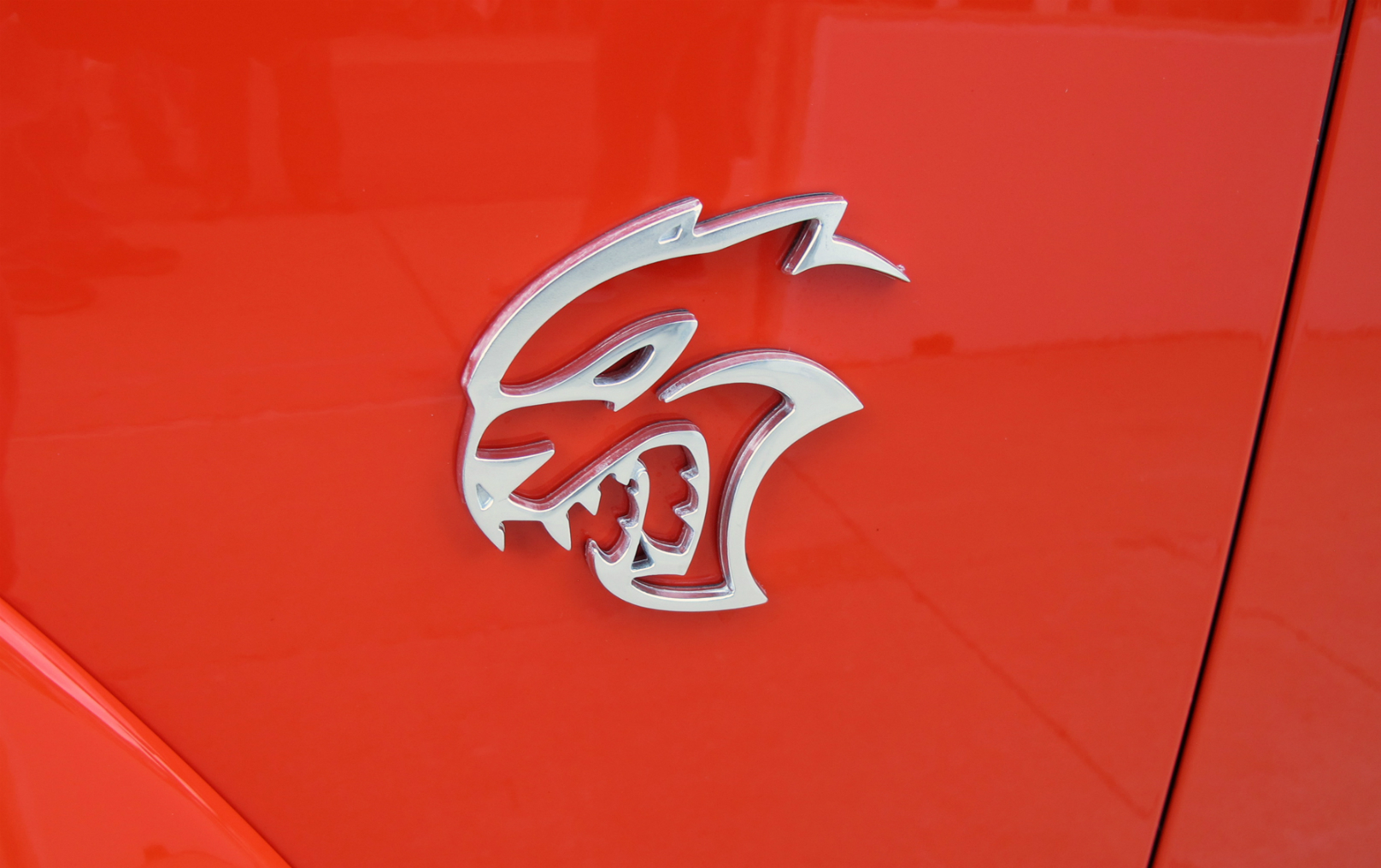