With its long hood, short front and rear overhangs, and rearward-sloping roofline, the 2016 Infiniti QX50 looks more like a coupe than a family hauler.

Infiniti’s smallest utility vehicle has never been big on utility.

This isn’t a knock against the Infiniti QX50, formerly known as the EX and then renamed in 2014. It’s an observation that this contender in the red-hot compact CUV/SUV segment is more than just a grocery getter.

Indeed, if cargo carrying tops your list of “must haves,” go mid-size. There are plenty of options near the QX50’s starting price of $37,900.

Or to stay within the luxury space, choose a compact like Acura RDX or BMW X1 that can easily schlep more boxes and bags.

These have a more traditional – more space-friendly – SUV shape, which contrasts with the curves, low roofline and swoopy silhouette of the QX50. 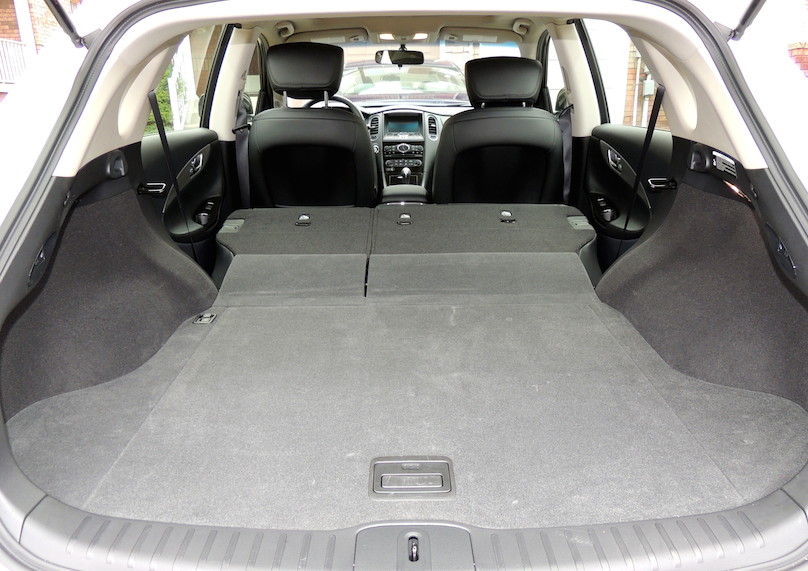 In this vehicle, Infiniti has created an offering that is more car-like than many of its rivals, other than perhaps the Mercedes GLA, which has even less cargo space.

The QX50 has sporty proportions, with its long hood, short front and rear overhangs, and rearward-sloping roofline that ends in a steeply-raked rear hatch.

For 2016, it gets a revised front bumper, fascia and double-arch grille (putting it more in line with its siblings), along with new LED daytime running lights and LED fog lights.

Perhaps Infiniti’s greatest strength has been its interiors.

All have fit, finish and materials that rival anything in their segments, and the company’s second least expensive vehicle is no exception.

My base tester, which included none of the upgrade packages (Premium $4,400, Navigation $3,000, Technology $2,500), still came with a long list of standard content: leather seating with heating up front and eight-way power adjust for the driver (four-way for passenger); dual-zone climate control; six-speaker audio with seven-inch infotainment display; rearview monitor; pushbutton start; auto headlights;  aluminum roof rails and rear spoiler. Power moonroof has been added to the list. 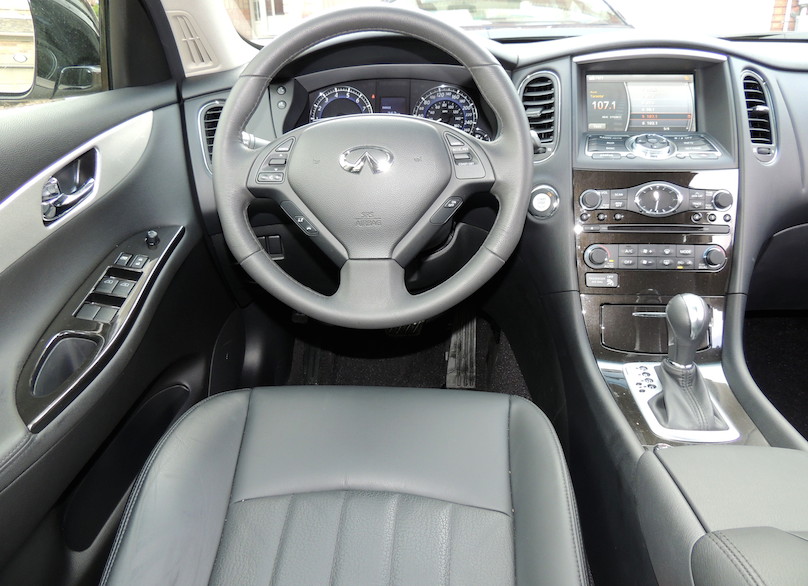 Heating and cooling are managed by knobs and buttons on centre stack, as is the audio system, which also gets analog controls. This includes pushbutton presets that make changing stations so much easier than finding your way through menus and submenus on a touchscreen.

Also standard is a remote release in the 527-litre cargo hold to drop the second-row 60/40 seats. You can get a power-up function with the Premium package, which also includes 19-inch alloys (replacing the standard 18-inch), Bose 11-speaker premium audio, front/rear sonar, seat memory, adaptive headlights and more.

All models are powered by a naturally-aspirated 3.7-litre V6 that produces 325 hp and 267 lb/ft of torque, besting much of the competition. 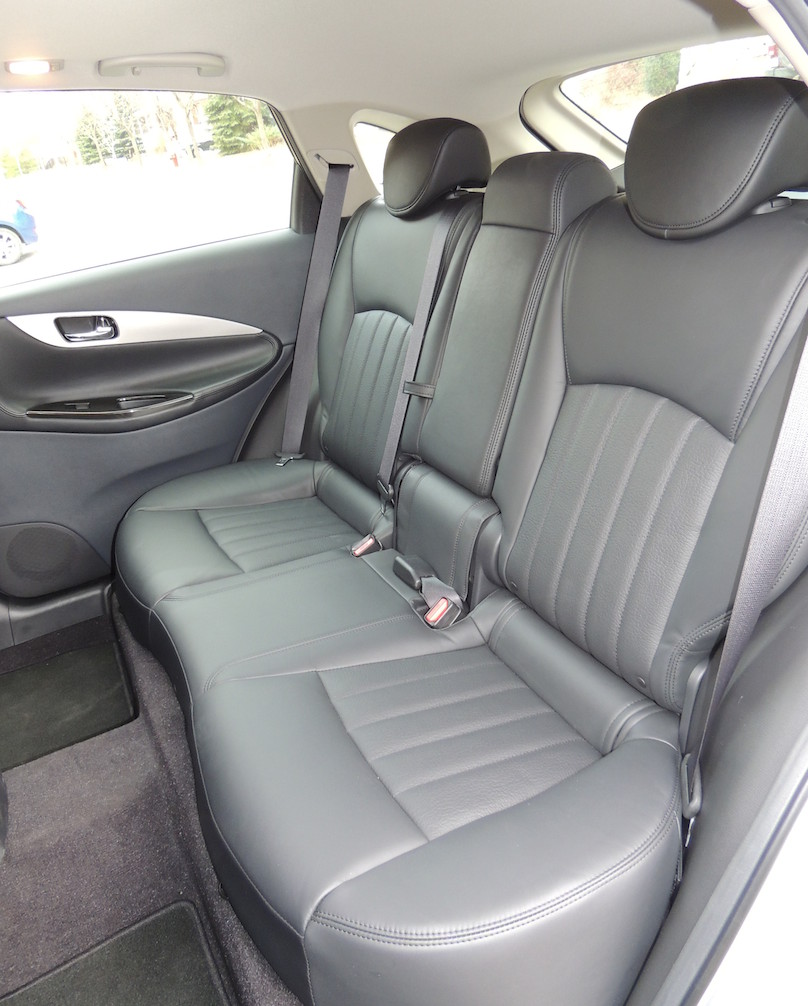 Infiniti’s rivals, particularly from Europe, have swapped their sixes for turbo fours. Even Lexus has done the same, with Acura RDX one of the few still offering a V6: at 279 hp and 252 lb/ft.

The QX’s power is routed through a smooth seven-speed automatic with downshift rev matching.

If you want to choose your own gears, manual mode is accomplished through the shift lever – there are no paddles.

I seldom used this feature, as the transmission’s adaptive shift control worked well enough on its own. Step hard on the pedal, and the QX50 jumps briskly off the line, delivering strong, linear acceleration on demand.

And it comes with a nice, throaty exhaust note thanks to a tuned system with equal length exhaust manifolds and reduced muffler back pressure for better breathing.

Infiniti’s intelligent all-wheel-drive is rear biased, for a more performance-oriented experience on dry pavement. Especially on twisty roads where this vehicle feels at home.

There’s still more to its nimble driving dynamics. Compact size plays a role, as does its relatively long wheelbase and short overhangs. 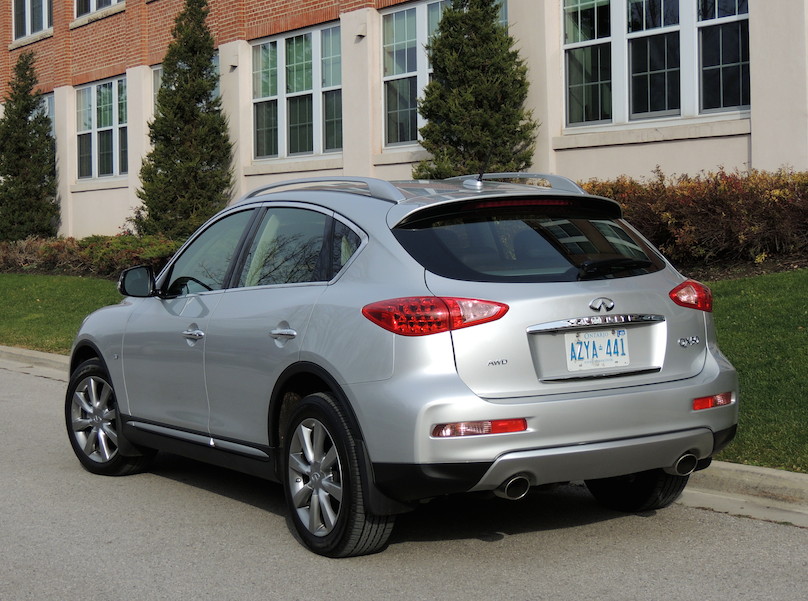 In an industry with more segments than ever before, and blurred lines between them, Infiniti has resisted the urge to make the QX50 all things to all people.

There’s no pretense of outstanding practicality – although it can hold its own. And no boasting of exceptional fuel economy.

If, on the other hand, you want something that drives more like a sports sedan, but with a little more space, a higher driving position and the security of all-wheel-drive, the QX50 is worth a closer look.