If you’re looking for a modern, powerful, comfortable and user-friendly GT then I would heartily recommend the DB11.

I recently got the opportunity to get behind the wheel of Aston Martin’s latest creation the DB11. Since this car debuted at the Geneva Motor show in 2016, I have been struggling to come to grips with the styling. I had certain design expectations after seeing the stand-alone Aston Martin DB10, featured in the James Bond movie “Spectre”, that were not realized in the DB11.

Driving and interacting with the DB11 gave me a chance to reevaluate my position on it. Nothing beats hands on experience to shape your perspective. 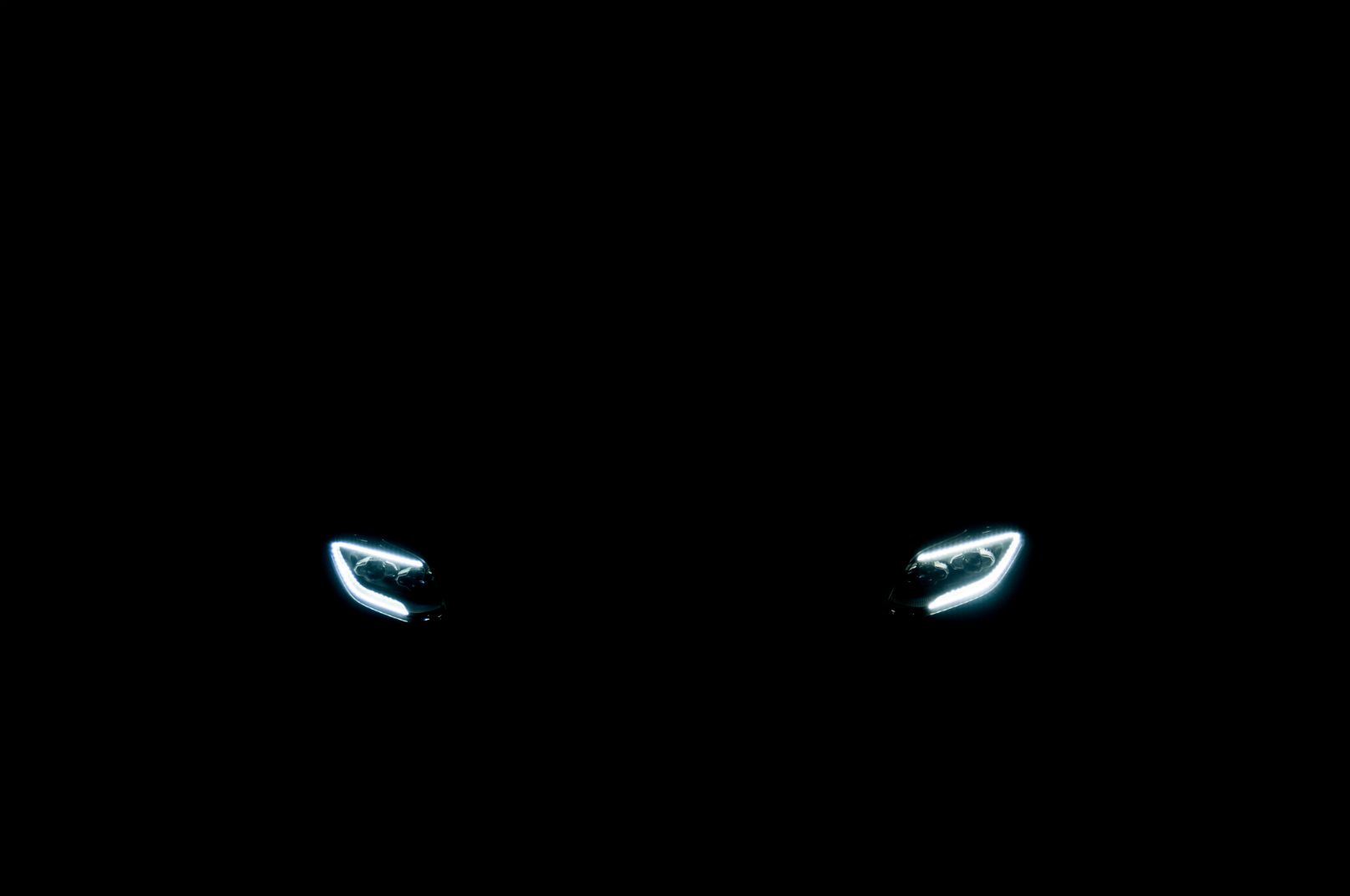 The DB11 is a replacement for the elegant but long serving DB9.  It is the first Aston Martin to benefit from the 5% stake Daimler Benz has recently invested in them. The most noticeable feature of Mercedes origin in the cabin is the infotainment controller. Future Astons will benefit from Mercedes AMG engines, but for now the DB11 has an all new Aston Martin engine and for the first time—twin- turbochargers. The DB11 features a 5.2L twin turbo charged V12 that is mated to a rear mounted 8 speed ZF automatic gearbox and delivers six hundred hp which is good for  top speed of 322km/h.

The DB11 has moved the game forward for Aston Martin incorporating electric power steering, torque vectoring by braking and 3 stage adaptive dampers. Coupled to this wizardry is an adaptive powertrain with normal, sport and sport plus modes. Included in the package is a new satellite navigation system, a 360-degree camera and the de rigueur Bang & Olufsen audio system whose speakers rise Promethean like out of the dashboard when you start the car. 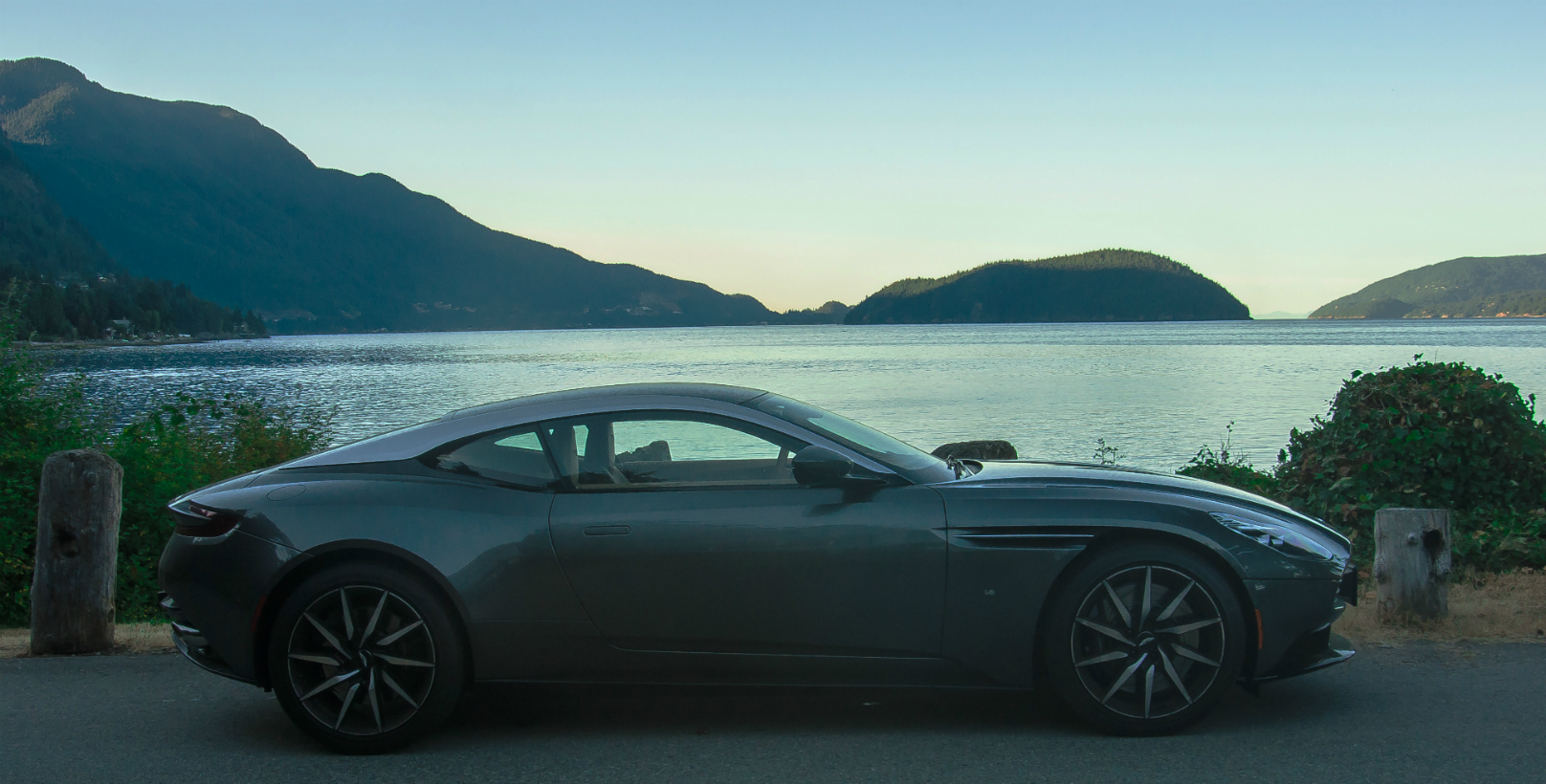 The crystal key used on the Vanquish and DBS has sadly been replaced by a cheap plastic fob. I miss the theatrical element of inserting the crystal key into the ignition.

I picked up the DB11 at 4:45am in the morning then drove to pick up my friend Steve, who was my photographer for the day. So naturally having 600 bhp at my disposal and empty early morning streets, I put the powertrain in sport plus mode, and mashed the throttle. I was immediately rewarded with a delicious sonic rumble from the V12 and was thrust down the road.  I might have been having a little too much fun as I arrived early to pick up Steve, mindful of his neighbors I turned the powertrain back to normal mode.

Steve who is over 6 feet tall commented immediately on the roominess of the interior and the comfort of the leather seats, with their multi positional comfort settings, and declared he could ride in this car all day. 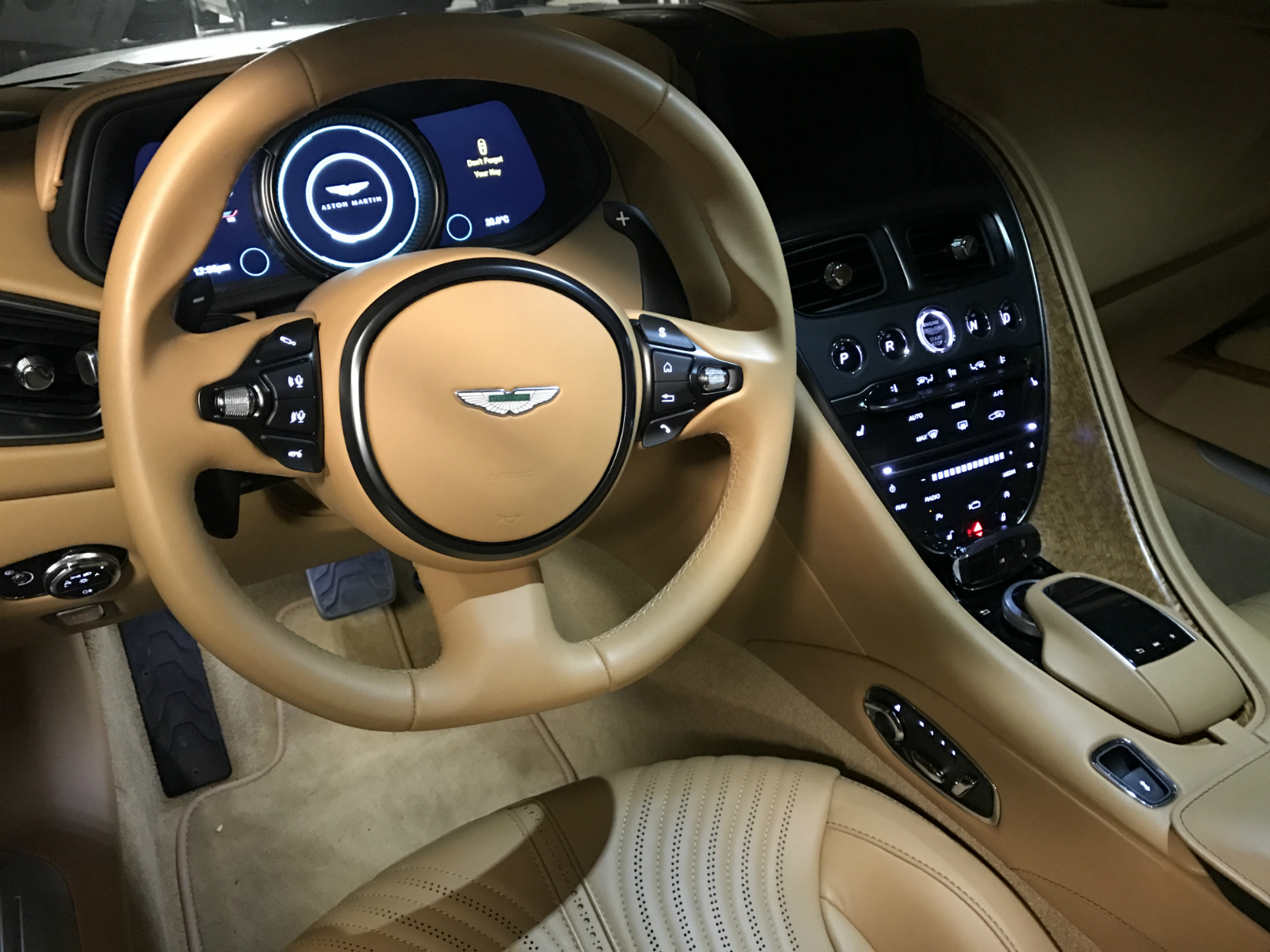 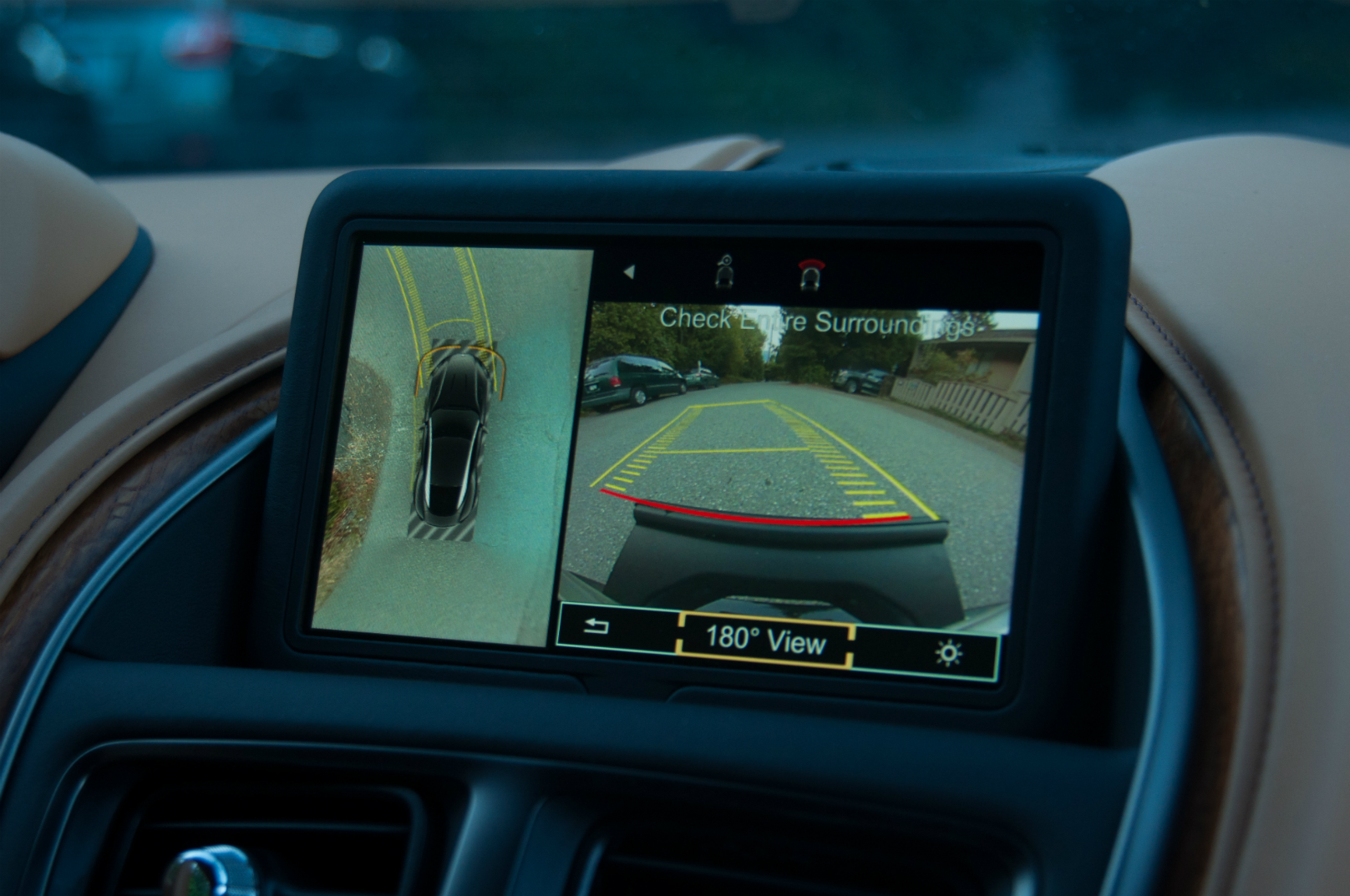 Our first destination was Ambleside Park in West Vancouver. I choose this location to capture images of the DB11 with the rising sun and an iconic Vancouver landmark, Lions Gate Bridge. My heavy right foot brought us to our destination once again earlier than anticipated, which left the DB11 to bathe in stygian darkness.  As the early morning light slowly appeared it gave me an opportunity to study the styling of the DB11.  I still was not getting it, whereas Steve said it was beautiful and that I’d lost my mind. Beauty is indeed in the eye of the beholder. 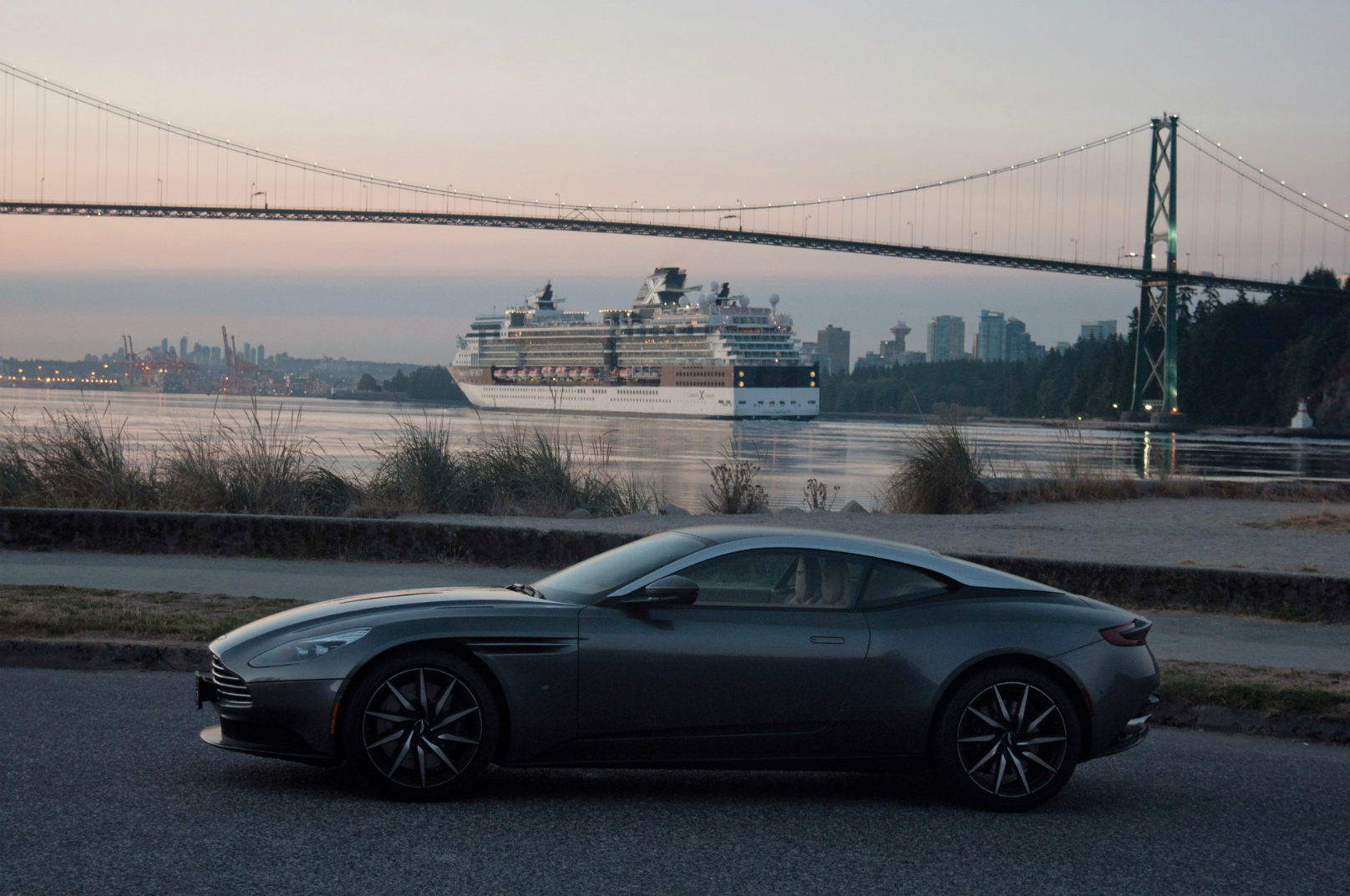 Cyprus road winds its way up to the ski resort at the top of the mountain. In summer it pays to be early to beat the hordes of Tour de France enthusiasts who use it as a training exercise. My own training exercise was to try out the various powertrain modes using the paddle shifters, behind the steering wheel. The paddles are a good size, easy to reach and require minimal pressure to engage them.

The DB11 is not a supercar. It has an automatic clutch not a dual clutch like the Ferrari 488 so that instant response is not quite there, nor if I am honest does it need to be. Leave the DB11 in automatic and the ZF gearbox will do its thing. This car is a fast and comfortable Grand Tourer, so no need to muck things up by pretending you’re in a supercar.  The electric power steering felt predicable and I was easily able to place the car on the road. The 600bhp compensates for the 1900kg weight of the DB11. As with many modern exotics triple digit speeds come effortlessly necessitating the driver to pay strict attention to the digital speed readout in the center display. 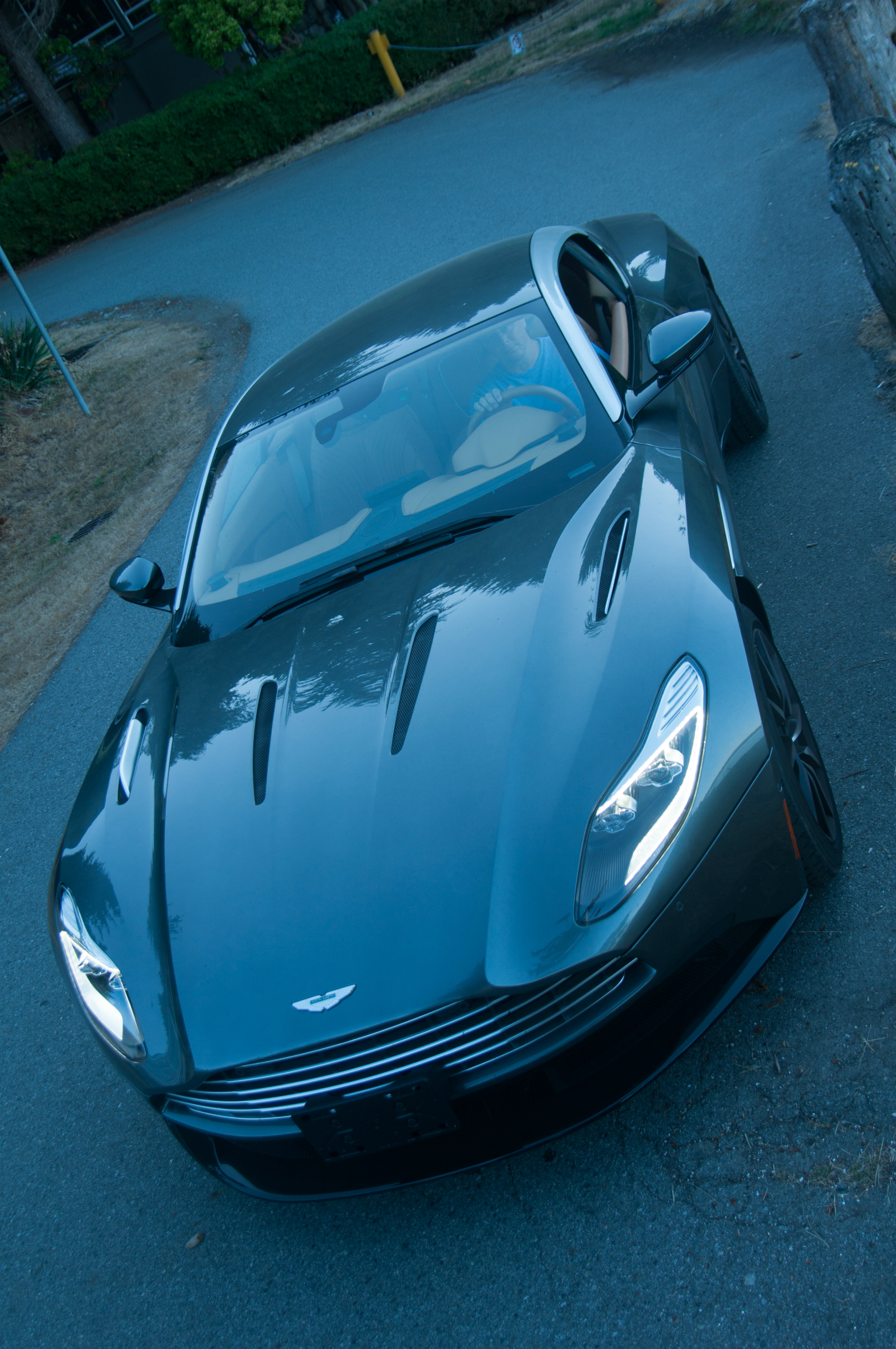 Before we started some highway driving I made one last stop to get some beauty shots and it was here I had my DB11 epiphany.  The car was parked on an empty residential road that looked out onto Bowen Island and Horseshoe Bay. Steve had wandered down to the beach so I hopped up on a wooden stump to get an overhead perspective of the car and suddenly I understood the styling of the DB11, I could see styling cues taken from the million-pound limited edition One-77.  Now I could fully appreciate the design language of the DB11. 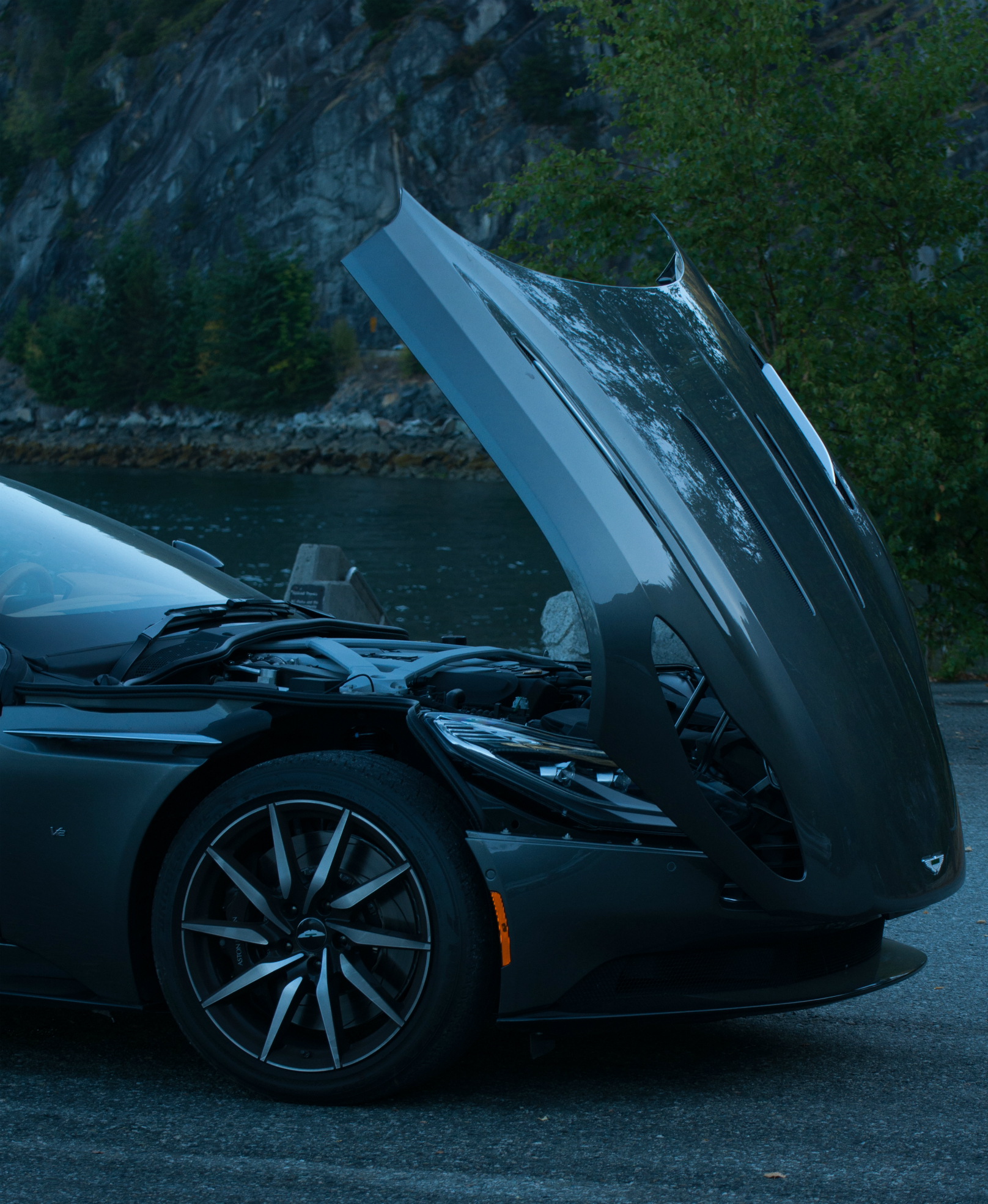 It was time to drive the Sea to Sky highway, arguably one of the most scenic roads in the world. Sadly, I failed to fully prepare for the mass of cars that would be joining us. Labor Day long weekend means a snaking traffic jam which made it the perfect cruising test, one which the DB11 soaked up with ease. 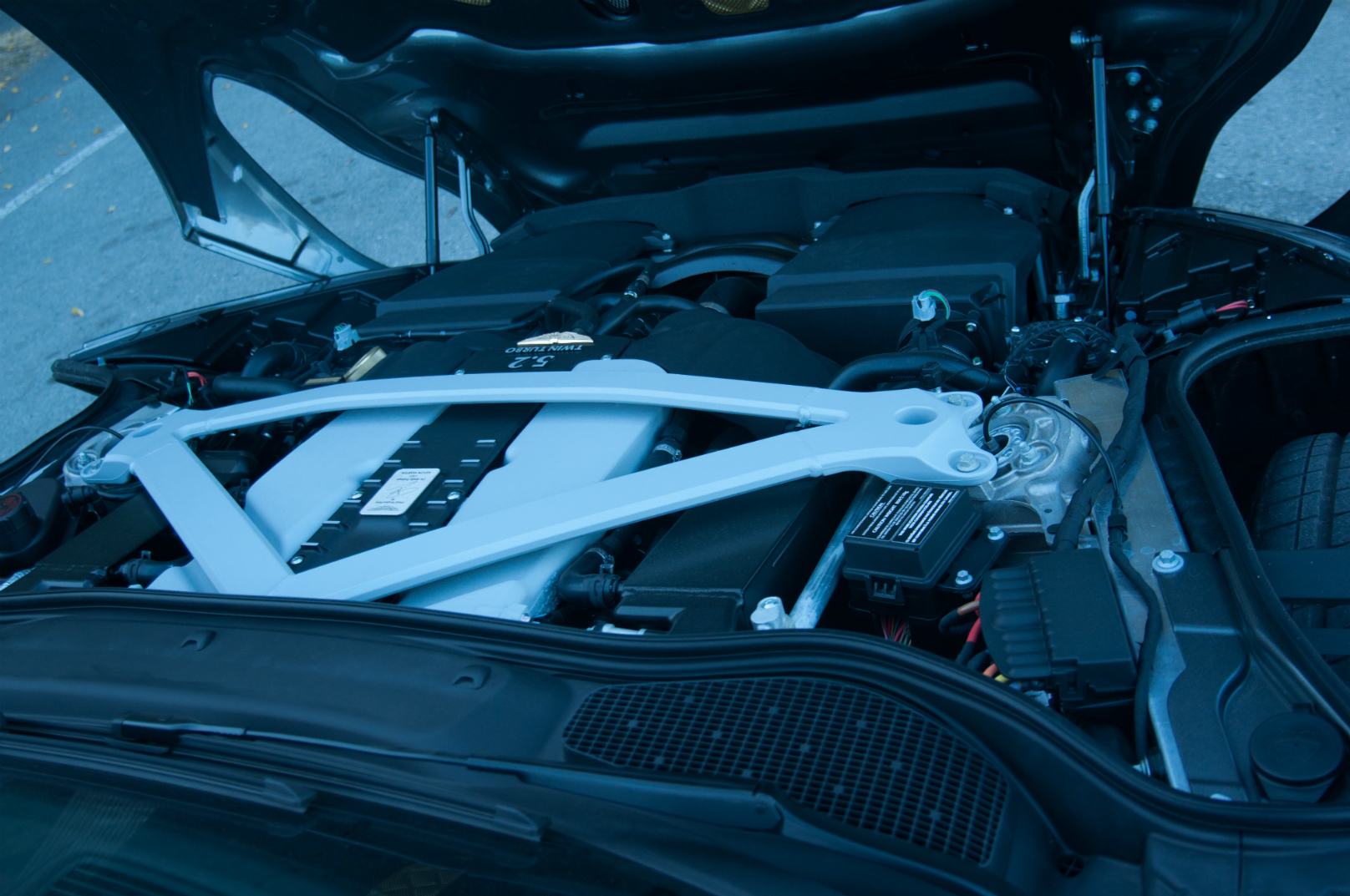 The cruise did reveal how noisy the cabin was, which was rather surprising, however with the Bang & Olufsen system turned up the issue was easily mitigated.  The exquisite interior does have a few weak points, most visibly the cheap plastic toggle button used for adjusting the mirrors.

The DB11 is sold as 2 + 2 but I wouldn’t cram adults into those back seats unless you don’t like them. I tried this once in a Vanquish for a short 10 minute ride and I would not recommend it again.

The DB11 I was driving was the launch edition so it featured a few eccentricities, namely a jewelry package. Opening up the bonnet reveals the magnificent 5.2L V12 engine complete with a final inspection badge bearing the name and signature of Aston Martin CEO Dr. Andy Palmer. The single piece aluminum strut tower brace is an art piece by itself. The jewelry package includes gold leaf trim on the engine padding, gold trim on the Aston logo and a gold tipped washer fluid filler cap—and all of this can be yours for just $254,195 Canadian.

If you’re looking for a modern, powerful, comfortable and user-friendly GT then I would heartily recommend the DB11. Leave it in auto but use sport and sport plus modes to enjoy the sonic burbling of its mighty V12 engine.

Do yourself a favor and occasionally open the single piece aluminum engine cover to admire the sculpted strut tower brace. I understand and appreciate the DB11 better now, however it’s still not a beautiful car for me. 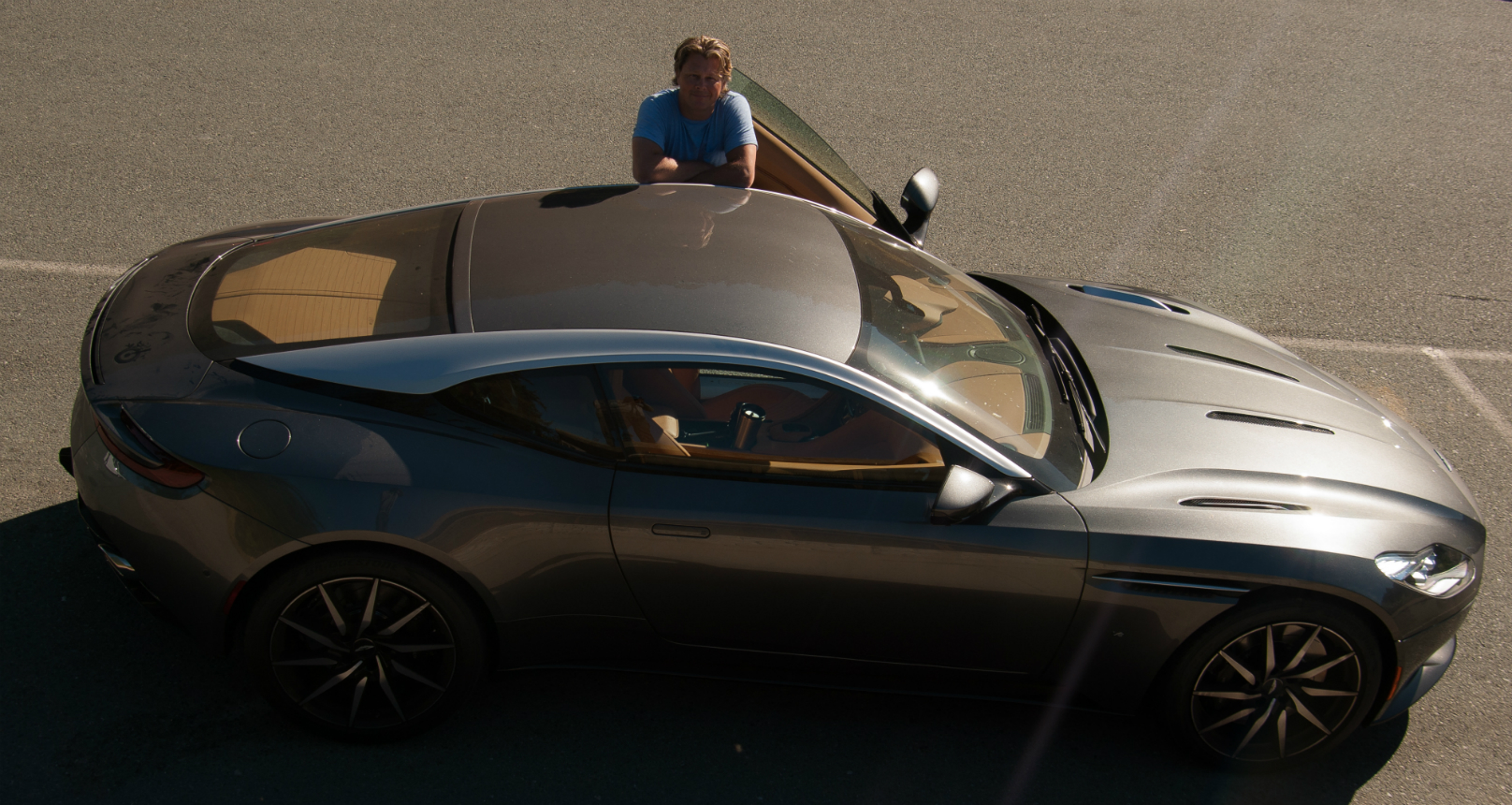 Is the Ferrari FF practical enough to drive everyday?