A product of another time, the A160 is disarmingly cute, artful and inoffensive. You won’t find an angry line anywhere on it.

The year 1998 saw a U.S. president deny having a tryst with a White House intern, two Stanford students incorporate an Internet search engine with the unlikely name of Google, and German activists demand six weeks of paid vacation for unemployed workers.

It was also the year Mercedes-Benz rolled out a new model that represented a cheeky deviation from its usual luxury fare. The minuscule A-Class “city car” became the automaker’s entry-level product slotted below the rear-drive C-Class sedan everywhere except in North America – likely out of concern that the wee hatchback might tarnish the hallowed brand.

They needn’t have worried. Mercedes’ first front-drive car had benefited from an enormous amount of forethought, including packaging all of the oily bits under its tiny front hood and thrusting the wheels into the far corners of its chassis, a concept Alec Issigonis had perfected 40 years earlier in his brilliant Mini.

More significantly, the impossibly small A-Class upheld Mercedes’ exemplary reputation for stout construction and passenger safety in a subcompact segment that has not always been viewed as a safe way to travel. Its unique front-impact system allowed the engine and transmission to submarine beneath the raised “sandwich” floor rather than compromise the passenger cell in a major collision.

Still, early sales of the A-Class suffered a setback when the car failed Sweden’s “elk test,” which probes a vehicle’s emergency handling capability. The little car flipped over in the maneuver, which could result in serious injury to occupants. Mercedes recalled every A-Class and retrofitted each one with electronic stability control, a revised suspension and meatier tires.

After making electronic stability control standard (prompting other automakers to do the same), Mercedes had a winner on its hands: 1.1 million A-Class hatchbacks were sold by the time first-generation production ended in 2004. 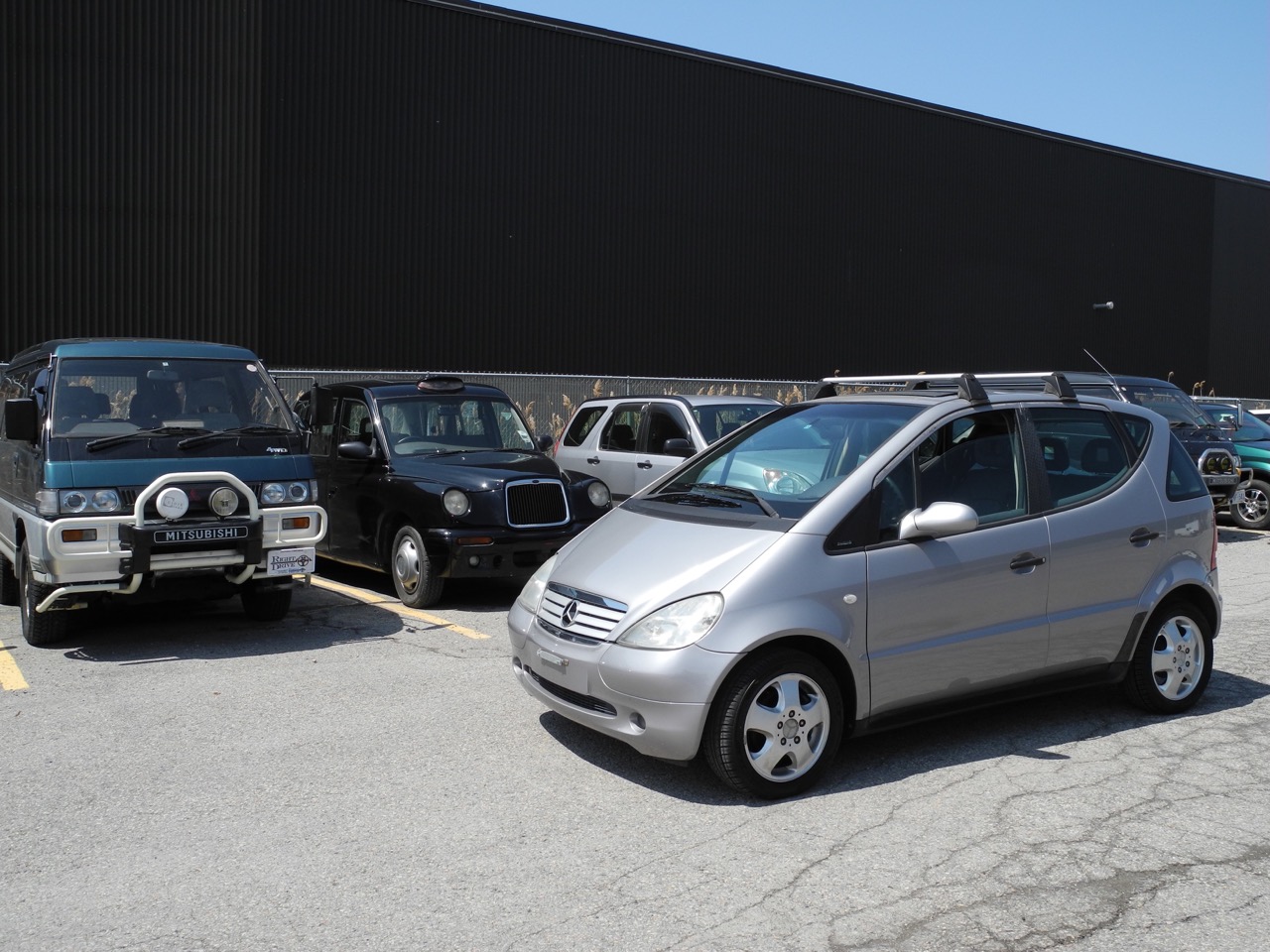 With news that Mercedes-Benz is bringing the fourth-generation A-Class to its Canadian showrooms this year – a very different car since it morphed into a larger, more opulent model that could compete with BMW’s 1 Series and Audi’s A3 cars – we thought we’d take an original 1998 A-Class A160 for a spin to see what this car’s legacy is all about.

Surprisingly, we found two examples of the first A-Class at Right Drive Inc., a unique importer and retailer of used vehicles sourced from the Japanese domestic market (JDM), located in Pickering, just east of Toronto.

CEO Michael Kent – a former Speed Channel producer and drift racer – cultivated a used-car niche by taking advantage of a loophole in Canadian trade rules that allows 15-year and older vehicles to be freely imported. By sourcing its second-hand vehicles from Japan, buyers can access pristine older vehicles that rarely disappoint.

Vehicles are subject to mandatory inspections, called shaken, every two years in Japan to ensure they’re maintained to spec. Thanks to shaken – and the fact the average Japanese motorist drives only 9,000 km annually – 15-year-old JDM vehicles often arrive in remarkable condition.

Right Drive makes most of its sales supplying right-hand-drive vehicles to Canada Post’s rural and suburban mail carriers, who prefer driving Japanese-market Honda CR-Vs with the steering wheel on the “wrong side” so that they can reach roadside mailboxes easily.

Fans of Japanese sports models, such as Nissan’s legendary Skyline GT-R and Mitsubishi’s Lancer Evo, can order these classics through Kent’s import business. In addition, tiny Suzuki and Honda dump trucks are coveted by landscapers and farmers who have small jobs to do on a budget. 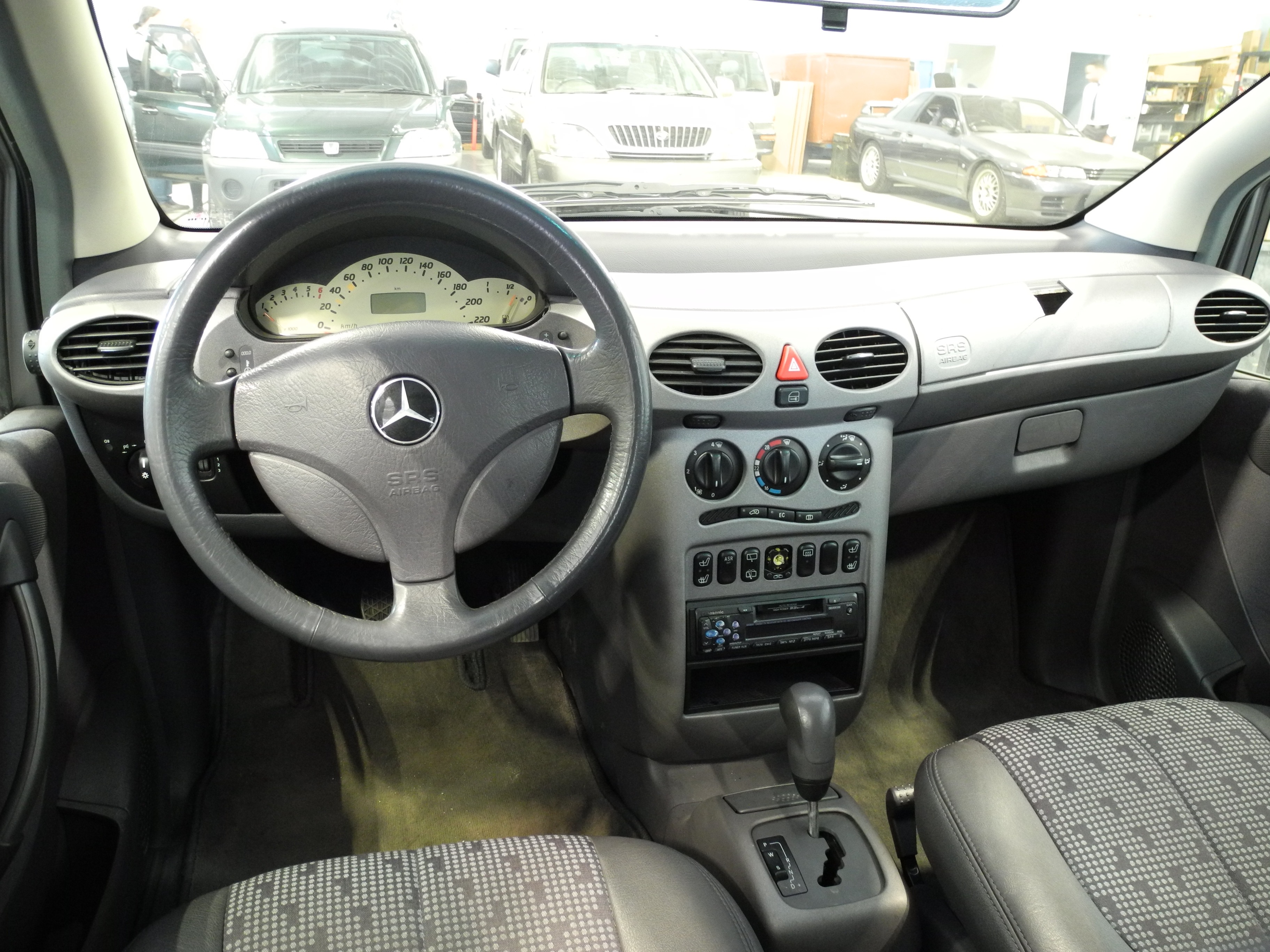 So how did Right Drive end up with two Mercedes A-Class hatchbacks from Japan, neither of which is right-hand drive?

“Japan imports a lot of European models and many of them are not right-hand drive,” says sales rep Darko Kasalovic. “We took a gamble on this city car. Frankly, I’m a little surprised there isn’t more demand for it in Canada.”

Well, for one thing, the silver A160 I took for a drive is small. How small? The owner’s manual is engraved on the head of a pin (er, sorry). This five-door hatchback is just one metre longer than the elfin Smart Fortwo, with about the same footprint as BMW’s reinvented 2002 Mini.

Walk around the A160 and you get a good sense of its tidy proportions. The hood duplicates the rake of the big windshield, giving the car a wedgy look that still looks contemporary. There’s no chrome beyond the trademark grille and the lines are refreshingly crisp and spare.

It can seat four people in reasonable comfort or five in a pinch thanks to the car’s tall-boy profile, which allows the seats to be raised off the floor – which itself is well off the ground to accommodate the unique safety-cell construction. The floor is minivan flat, which helps.

The A-Class is distinctly un-Benz-like with its semi-circle instruments, wave-like dashboard, cheerfully patterned upholstery and “mouse fur” door panels. Its designers were clearly having some fun; in all likelihood the A-Class was their practice vehicle before being assigned to the new Smart brand. 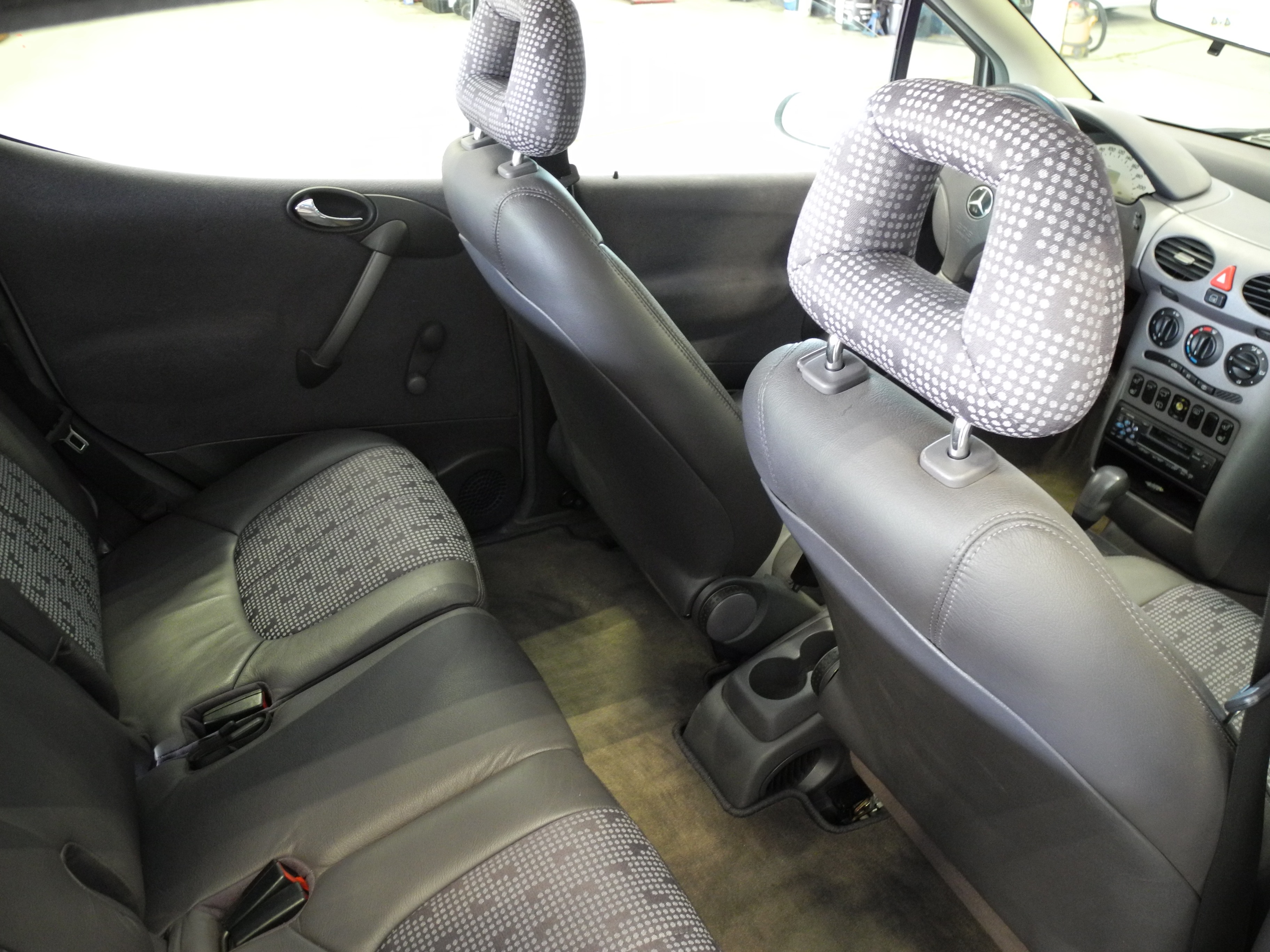 You might equate “fun” with “budget,” since our A160 Avantegarde had none of the upscale furnishings that Mercedes-Benz is known for in North America. The hard plastics and stiff seats have more in common with the automaker’s commercial vans than any Benz sedan. And while I’m not one for posh surroundings, would it have killed Mercedes to put an armrest between the front seats?

In reality, the A-Class is a practical commuter car that’s designed for city living. All the seats, except the driver’s, can be unlatched and removed entirely to convert the hatchback into a microscopic van. There’s even a full-size spare tire under the car’s decent-sized cargo hold.

The A160 is propelled by a 1.6L four-cylinder gasoline engine that puts out 102 horsepower and 111 lb-ft of torque – decent numbers back in 1998. The engine is reasonably smooth, though it gets a little coarse as the engine approaches the redline. The five-speed automatic transmission (there’s a five-speed stick and semi-automatic available, too) shifts early to prevent that from happening, and top gear sees the engine turning 2500 rpm at 100 km/h.

Acceleration can be characterized as leisurely. It won’t embarrass you between red lights, but your favourite expressway on-ramp had better be a long one, especially if you have passengers. There’s nothing intrinsically sporty about the A160 – and this is the one with the big motor.

The ride is very compliant on smooth roads, but potholes and expansion joints invite suspension crashes that are unduly harsh. Hard to say if that’s just a symptom of aging struts or if the suspension wasn’t quite sorted out in 1998, or a combination of both.

The ride was accompanied by the creaking of 20-year-old plastic trim bits rubbing together, as well as a great deal of wind noise that’s attributable to the car’s removable roof racks, as well as a faulty louvred sunroof. A missing clip could not keep the leading edge flush with the roof, resulting in annoying air leakage.

Fuel economy is said to be stellar – a fact I could not corroborate in the few hours I had it – though it appeared that the car’s fuel indicator moved up slightly rather than down upon my return. Either the gauge has grown cranky with age or Mercedes figured out a way to distill fuel while driving.

Right Drive is selling this silver hatchback for $7995, which isn’t outrageous for an old Mercedes with just 49,000 km on the clock. It’s been sold conditionally, presumably waiting for a few parts (there’s a cracked airbag cover) to restore the A160 to its former glory.

Overall, this 1998 A-Class is an interesting piece of automotive nostalgia that shares only its nameplate with the incoming Benz hatchback and sedan. You have to have a sense of humour driving it, because nobody else on the road is going to take you seriously.

A product of another time, the A160 is disarmingly cute, artful and inoffensive. You won’t find an angry line anywhere on it. Sometime between 1998 and today, we seem to have lost our appreciation for play. 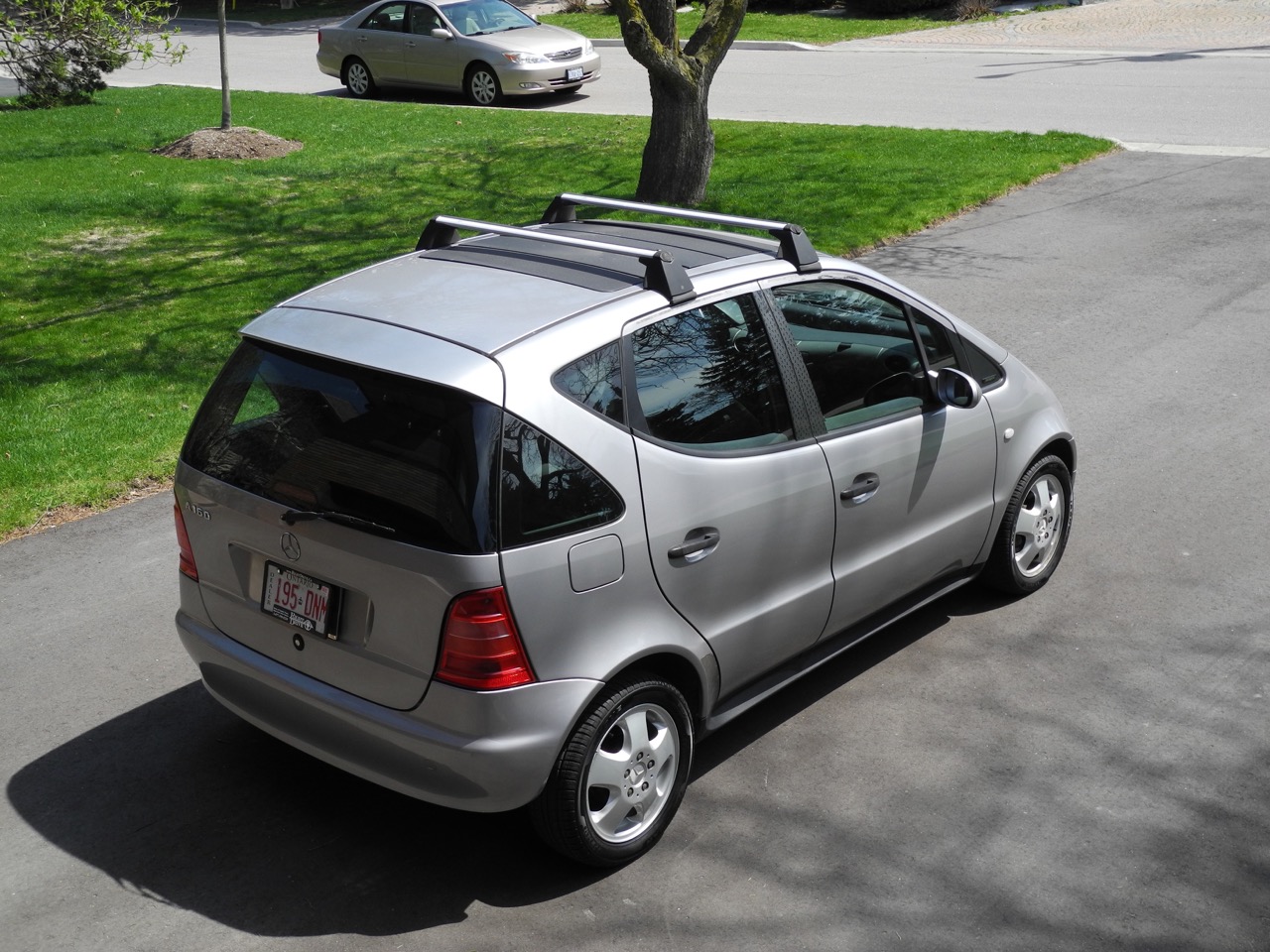 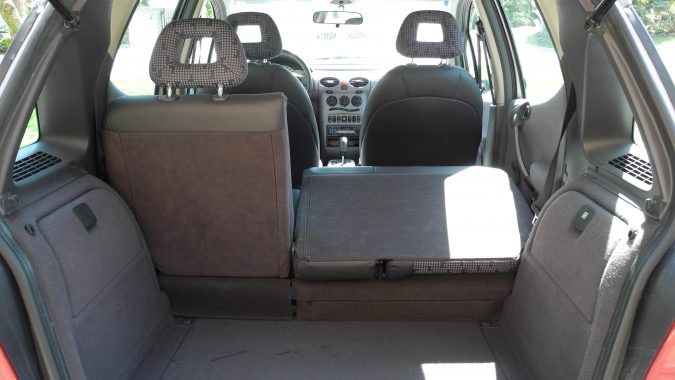 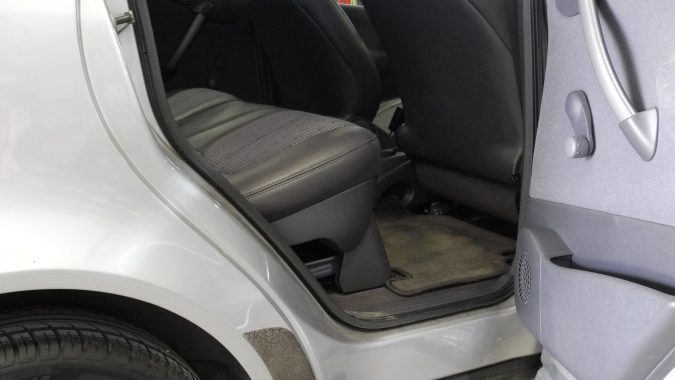 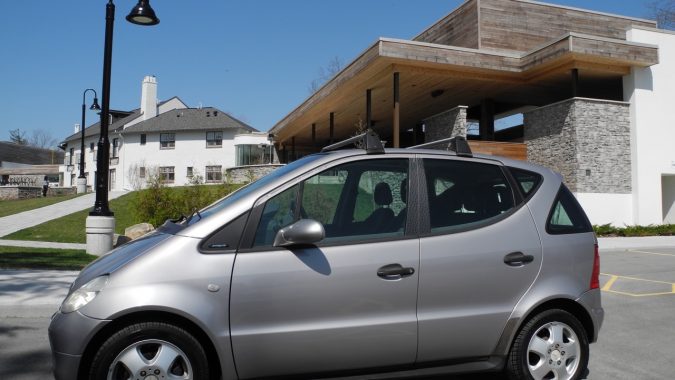 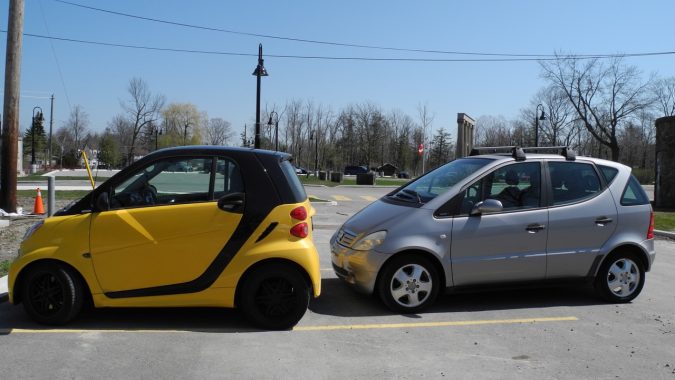 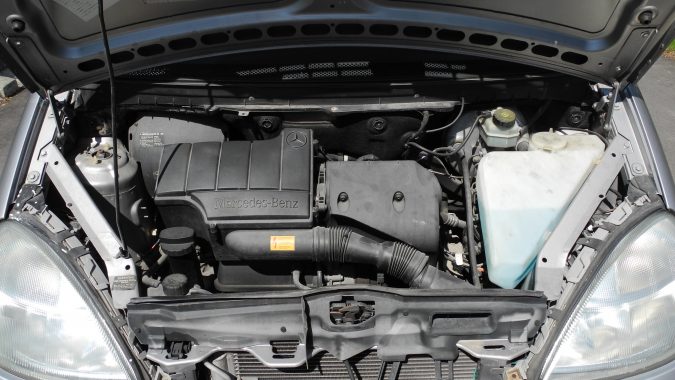