Class and confidence in off-road capabilities

BARCELONA, SPAIN—A few days before I flew over to Spain to drive the 2020 Land Rover Discovery Sport, a guy stopped by my house for a chat.

“Do you ever see much of the countries you visit?’ he asked.

“These trips are mostly the same — fly in on Day 1, drive the car on Day 2, fly out on Day 3. You see some of a country, but you’re testing a car, so you’re not really paying attention. You don’t have time to explore, like you would on a vacation.”

That was before I came here. I got to explore, all right. Not the way I’d have planned it, though.

We were met at the airport by a shuttle — there were about a dozen of us — and the itinerary said we would be at our hotel in 35 minutes. More than two hours later, after getting way off the track (How far off the track? Far enough to see a family of wild pigs run across the road), we got to our lodgings.

I was sorry we hadn’t been driving the Land Rover during our odyssey, because we could have used it. The roads in rural Spain are wide enough for one car, maybe two — but definitely not wide enough for a shuttle bus going one way and a car parked on the side of the road facing the other. The driver would honk the horn, which would first bring out the dogs, then the children and then finally the father, who would grudgingly move the family car.

A lot of the roads didn’t have guardrails and the drop was substantial. Some of them featured hairpin turns the bus was unable to negotiate. Oh, give me a Land Rover, I thought. The next day, I got one.

The P290 Mild Hybrid Electric Vehicle (MEHV) is also four-wheel drive and features a 2.0-litre, four-cylinder, gasoline-powered, turbocharged engine plus mild hybrid delivering 286 horsepower and 295 lb.-ft. of torque. The R-Dynamic SE goes for $54,350, while the top-of-the-line R-Dynamic HSE will set you back $58,700.

A plug-in hybrid is coming; meantime, the mild hybrid is here to help with efficiency of the four-cylinder. The 48V lithium-ion battery (8kW/h) sits under the second-row seats, where it stores kinetic energy for use when the car accelerates. The engine shuts off at speeds below 17 km/h to help reduce emissions and fuel consumption. It’s like a regular stop/start, but it doesn’t have to wait for the car to stop to kick in. 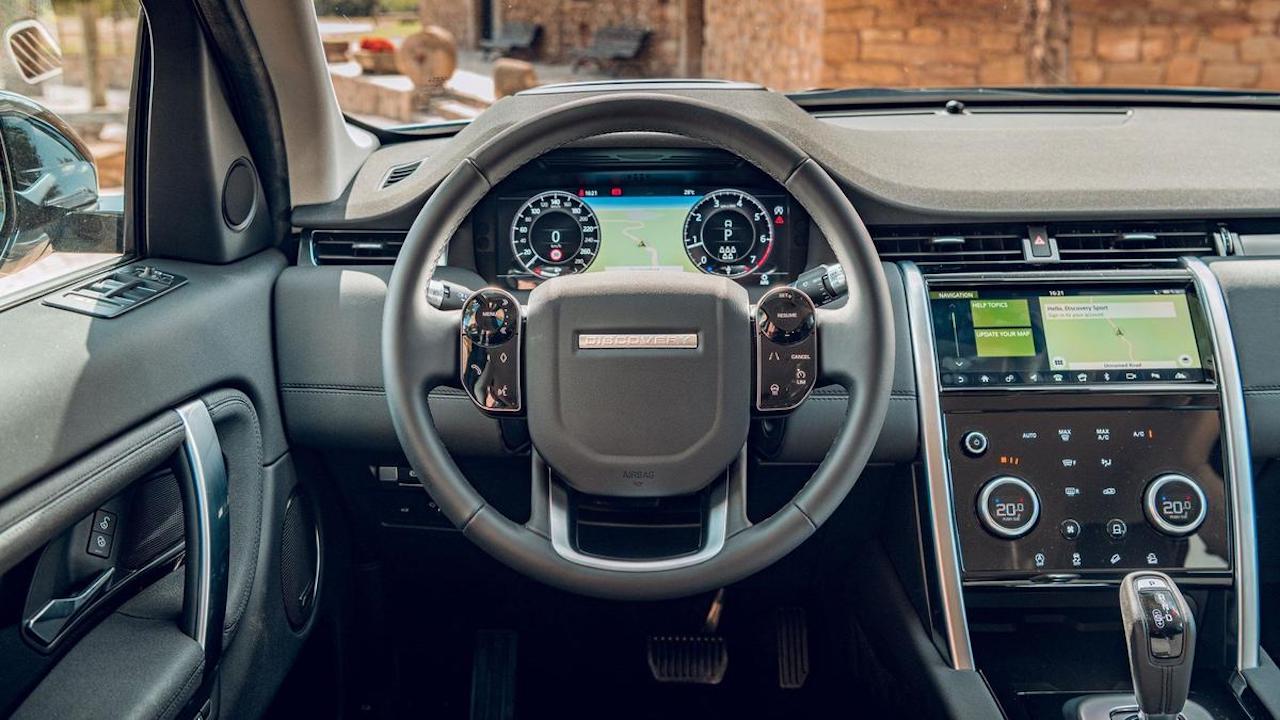 All the cars for Canada, incidentally, come with a nine-speed automatic transmission and 20-inch wheels (you can get 21-inch wheels as an option). This vehicle can go from zero to 100 km/h in about seven seconds, which is not exactly fast, but the Land Rover is not something you are going to take to the drag strip anyway (although top speed is 207 km/h). Unlike most other automobiles, the Discovery Sport is built to do not one thing but two: look good and drive well on the Gardiner and be capable of traversing old lumber roads in northern Ontario when you drive up there in the fall to go moose hunting.

The car has seven seats — they can be configured 24 different ways — but the two in the third row are either for children or small adults. Bigger adults might have problems. So, if you really, really need seven seats, I suggest that you purchase a bigger Land Rover. This “Disco” Sport model is better with seating for five (the second row has lots of room and is quite comfortable); with those two seats at the back flat, cargo space, which starts out at 591 litres, is enlarged to 1,575 litres.

Seven drive modes help you navigate just about anything you will encounter in this car, from dry pavement to mud on those logging roads I mentioned earlier. It’s the off-road where this car shines, and we put the Discovery Sport through its paces during an off-road session that saw us, at one point, going just about straight downhill. I activated the Terrain Response System, took my foot off the brake and enjoyed the ride. It was that simple.

On our drive, the car performed well. Steering was precise — when we were out on paved highways — and the ride was comfortable even when we were crawling over rocks.

The exterior has been spiffed up a little, although there’s no doubt it’s a Land Rover. The nose seems more stout and the LED headlights and tail lights and the outboard inlets give the Discovery its sporty look.

The interior has been redone, and it’s a comfortable and classy space in which to spend time in the car. Unlike previous editions, there is next to no plastic in the car, and all of the interior materials have been upgraded as part of the redesign. The front seats have been improved and there are two screens — a 12-inch digital instrument display and an infotainment touchscreen that’s 10 inches wide. Just about everything is done by touch; most dials have been removed, although a dial lets you select drive modes. And there is better ventilation.

A couple of space-age driver aids are new for 2020 (on top of the now-usual driver aids), and I’m not fussy about either of them. Several times I’ve made reference to taking some time to learn this new gadgetry before you take a car out on the road. Unfortunately, when you are testing cars on a short leash like we are, you sometimes have to feel your way. I suppose if I had time to get used to this new stuff, it would be fine. But right out of the box, it’s disconcerting.

For instance, a monitor in the interior rear-view mirror offers an unobstructed rear view (the camera is in the car’s frame at the back). I drove a few kilometres and had to switch to a “normal” rear-view mirror because I was afraid of a crash. I’d glance at it and it looked like an illustration. It’s something that you can probably get used to, but it looked artificial to me and I couldn’t continue with it.

The other thing is something called Clearsight Ground View, which shows what’s underneath the vehicle as it moves. A camera shows the ground ahead and you can see clearly how close to the edge of the road you are or whether that big stone in the road ahead is safe to pass over. Again, it takes some getting used-to, but I think that one could be a benefit.

Last, although I don’t go to the beach much anymore, I have grandchildren now and will undoubtedly have to take them, meaning I have to take my keys with me down to the water — although it’s only happened once or twice in my life, I worry about losing them.

Well, Land Rover has a solution. The Activity Key is a key fob you wear on your wrist. So you can go swimming, or jogging or golfing, and you don’t have to worry about losing your key and locking yourself out of your car. It can’t happen.

Now, every time I review a new car and a company executive comes along for the ride, I always challenge them to name one thing, maybe two, that sets the car we’re driving apart from the others. My victim — er, guest — this time was Martin Buffery, chief interior designer for Land Rover.

“So,” I said, “what is the one best thing about this Discovery Sport?”

“I’d say it comes down to class,” he said. “I think you’ve got a car that’s a lot more adaptable, a lot more flexible, to just about everything else on the road. You’ve got more seats and more tech in terms of driver assistance. If you want to feel confident doing something in this car, if you want to explore its real capabilities off-road, it’s got a lot more things to help you out than other cars will have.”

“And confidence,” he continued. “Ultimately, the reason you will want to drive this car is because of how much confidence it gives you. I think confidence is something you can’t buy. Go out on a snowy day in another manufacturer’s car, and you get yourself into trouble and you’re fighting the car all the time. It cannot deal with those conditions.

“We have a car that starts with those conditions. That’s how we start. And it performs, and that’s what gives you the confidence.”