The 2017 Honda Civic Sport Touring Hatchback is a stylish looking car that can handle almost anything a family can throw at it.

Honda has the ability to produce a car that is practical and fun to drive.

And nowhere is that more evident than in the 2017 Honda Civic Sport Touring, my tester during a recent week where the sun actually shone more than it rained.

The Civic has been a best-selling car for Honda for 18 years and the Hatchback just adds to the flexibility.

The Sport Touring is the top trim level available in the hatchback. My colleague Jim Kenzie reviewed the LX trim recently and found it to offer everything a compact CUV does but without the higher sticker price. 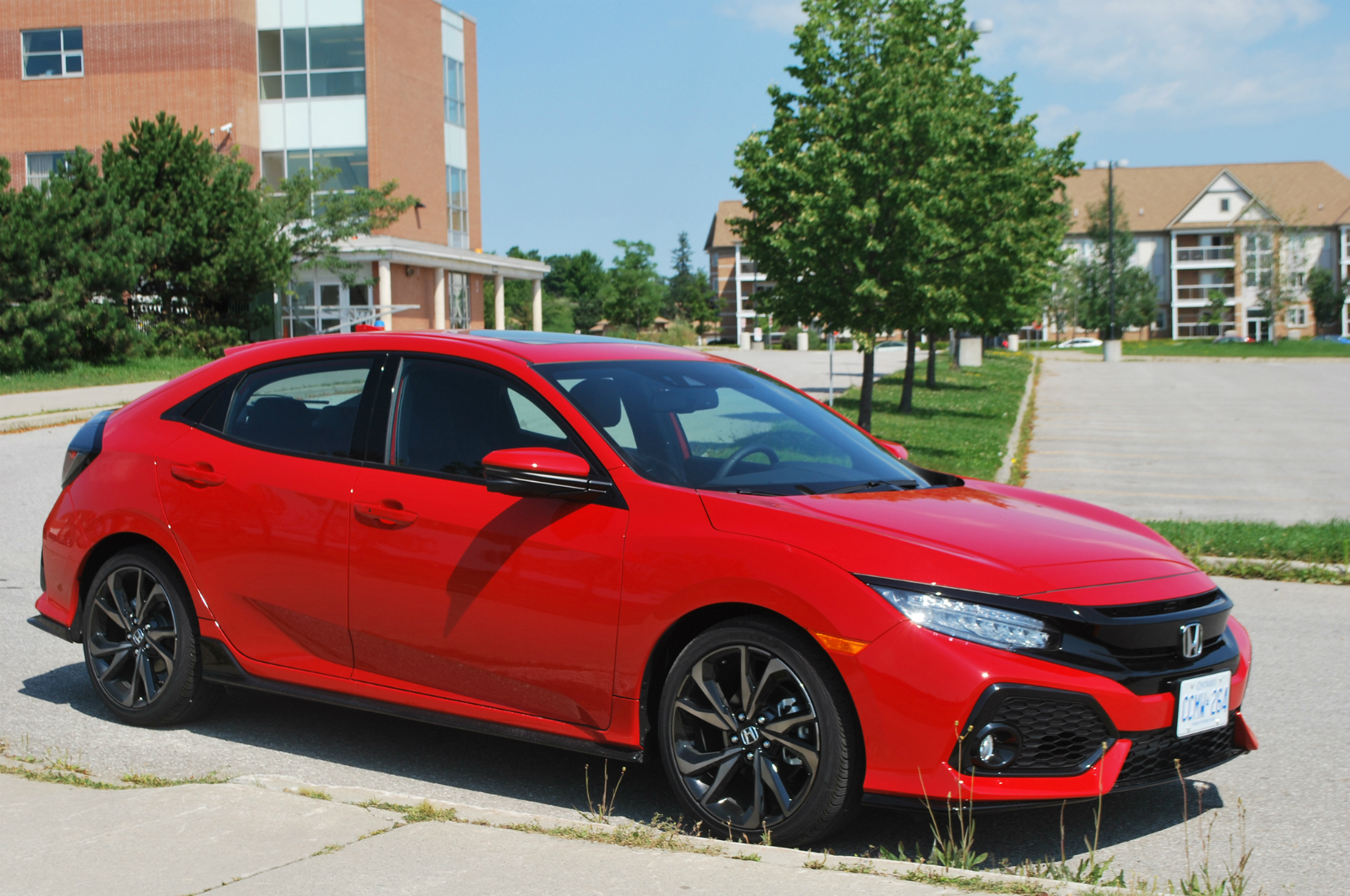 Think of the Sport Touring as an LX on steroids.

All Civic hatchbacks are powered by a 1.5-litre, 16-valve, direct injection, DOHC, turbo charged four-cylinder engine. The Sport Touring produces 180 hp at 5,500 rpms. My tester for the week had the continuously variable transmission but the hatchback also comes with a six-speed manual transmission that would make the hatch a bit more fun to drive. Torque on the CVT is 162 lb/ft. compared to 177 lb/ft with the manual six-speed.

The turbo helps the Touring get up to speed fast and gives you a great jolt when you put your foot on the accelerator whether moving from a stop position or looking for an extra kick while on the highway.

Don’t worry about the four-cylinder engine keeping up with traffic or giving you the confidence to pass on the highway. 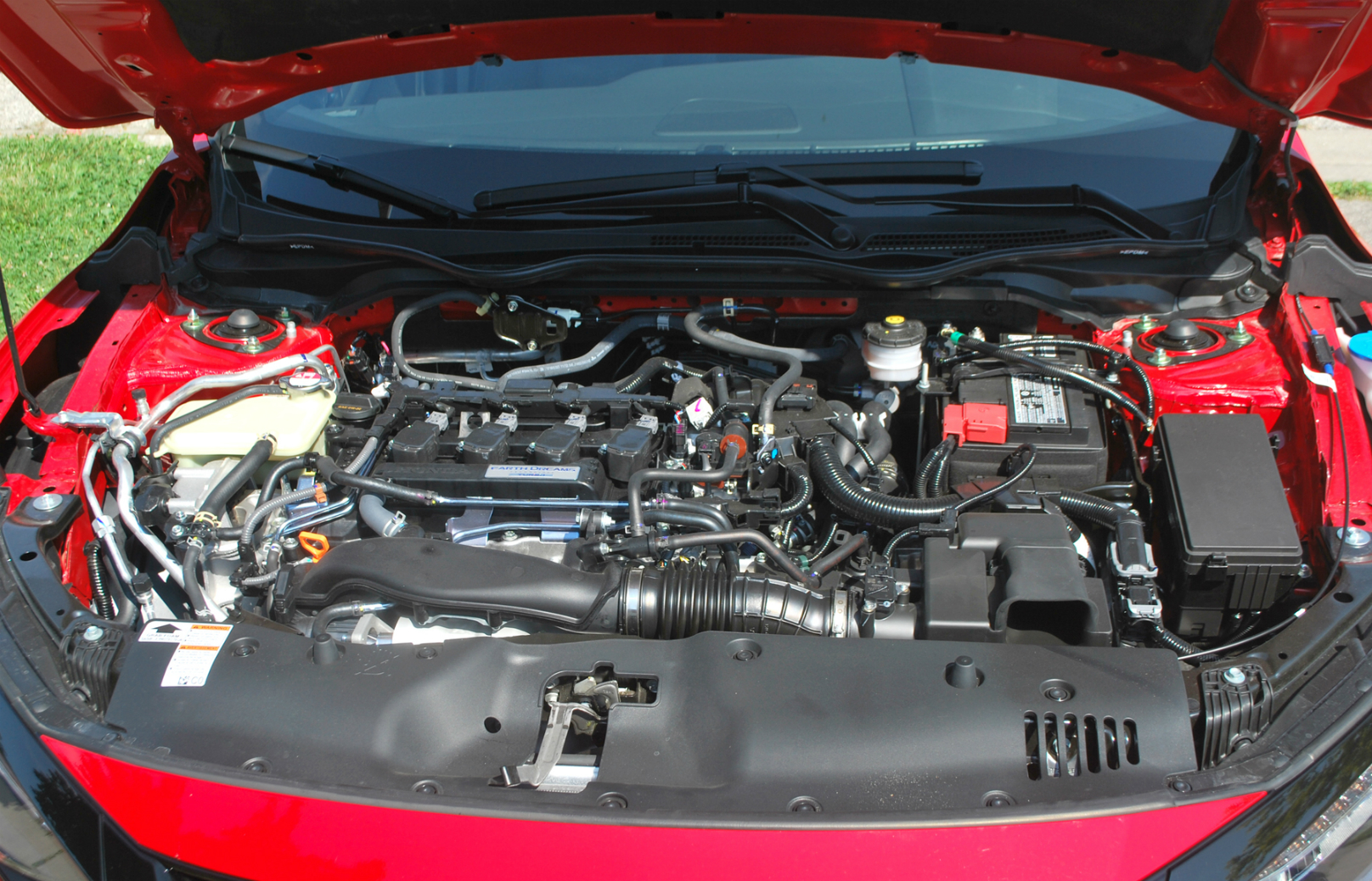 I never had that feeling once and it didn’t take long for my first smile to appear as I headed down the Don Valley on my way home from Honda with the sun beaming and room to see what the turbo-charged Touring could do.

The econ mode also gives you a nice feeling that you won’t be pulling into a gas station every other day even though premium gas is recommended for the Sport Touring.

And on Monday morning it didn’t take long for my co-workers to start noticing the car, especially in the Rallye Red colour.

Like all Hondas, the interior is smartly laid out with everything you need within your grasp.

The seven-inch centre monitor is easy to use and it took just seconds to sync my iPhone to the system. With Apple Car Play that allowed me to tap into many of my Apps including my music but with Sirius XM radio I didn’t really need the music on my phone much that week.

Both the LX and Touring Civic hatchback offer a 180-watt audio system with eight speakers but the Sport Touring ramps the sound to 542-watts with 12 speakers. More and more, car stereos are sounding better than anything you could build in your own home.

The Sport Touring has a lot to offer in the area of comfort including a 12-volt power outlet, rear seat heater ducts, textured aluminum pedals (which really stand out in the Sport Touring), power door locks and a remote starter, though only on the CVT. The Sport Touring also has wireless charging for your phone but I never found the need to use it. 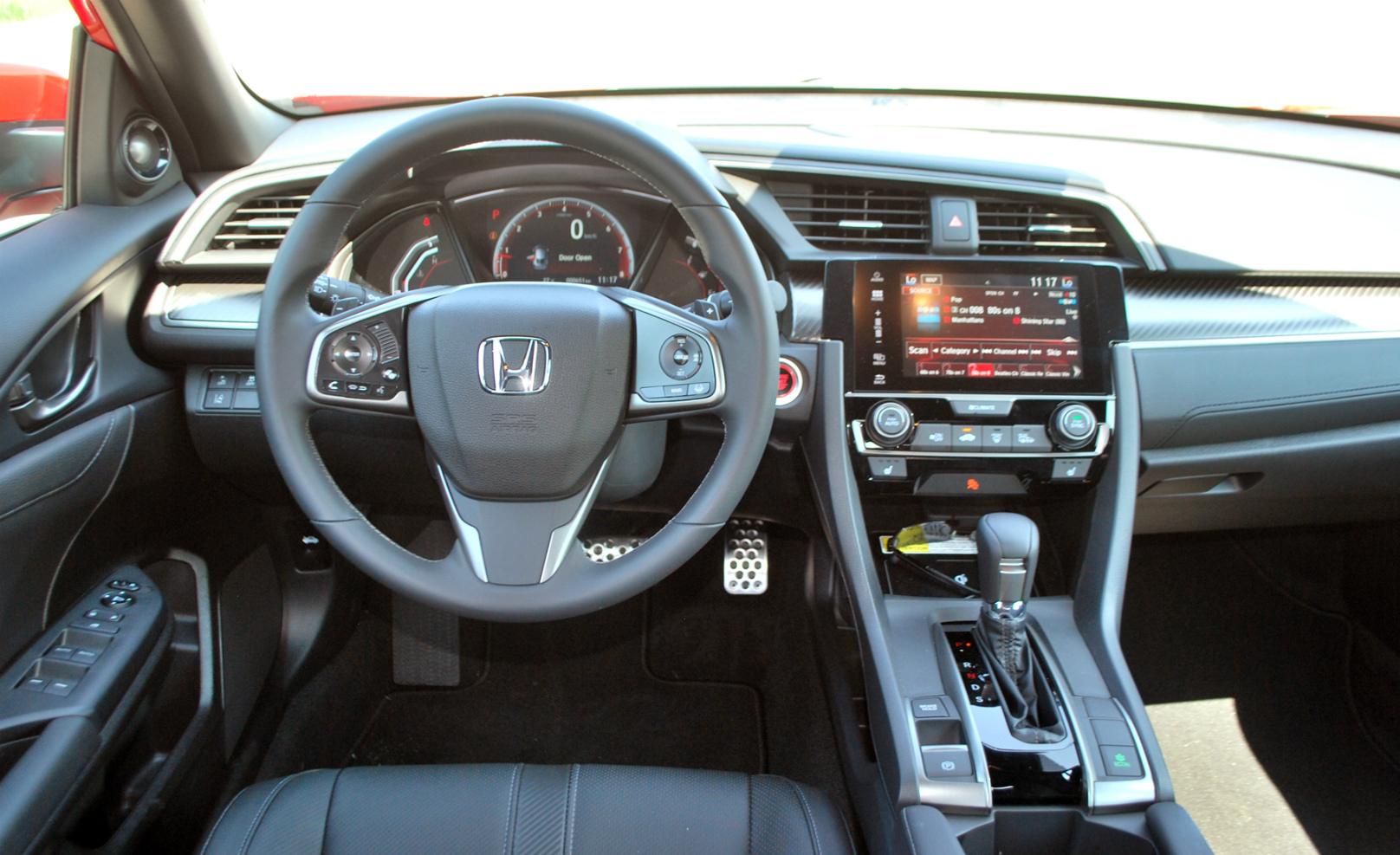 On the safety side, the Touring has a long list of standard features with the rear-view camera, vehicle stability assist, forward collision warning, adaptive cruise control with the CVT, four-wheel antilock braking and lane departure warning.

All Civic hatchbacks all have a plethora of airbags adding to the safety of the vehicle.

The week before the Touring I had a Ridgeline and during my numerous trips to the gas station I came to like the capless fueling system. All Civic hatchbacks have the same feature and I wish more car companies would move to it. 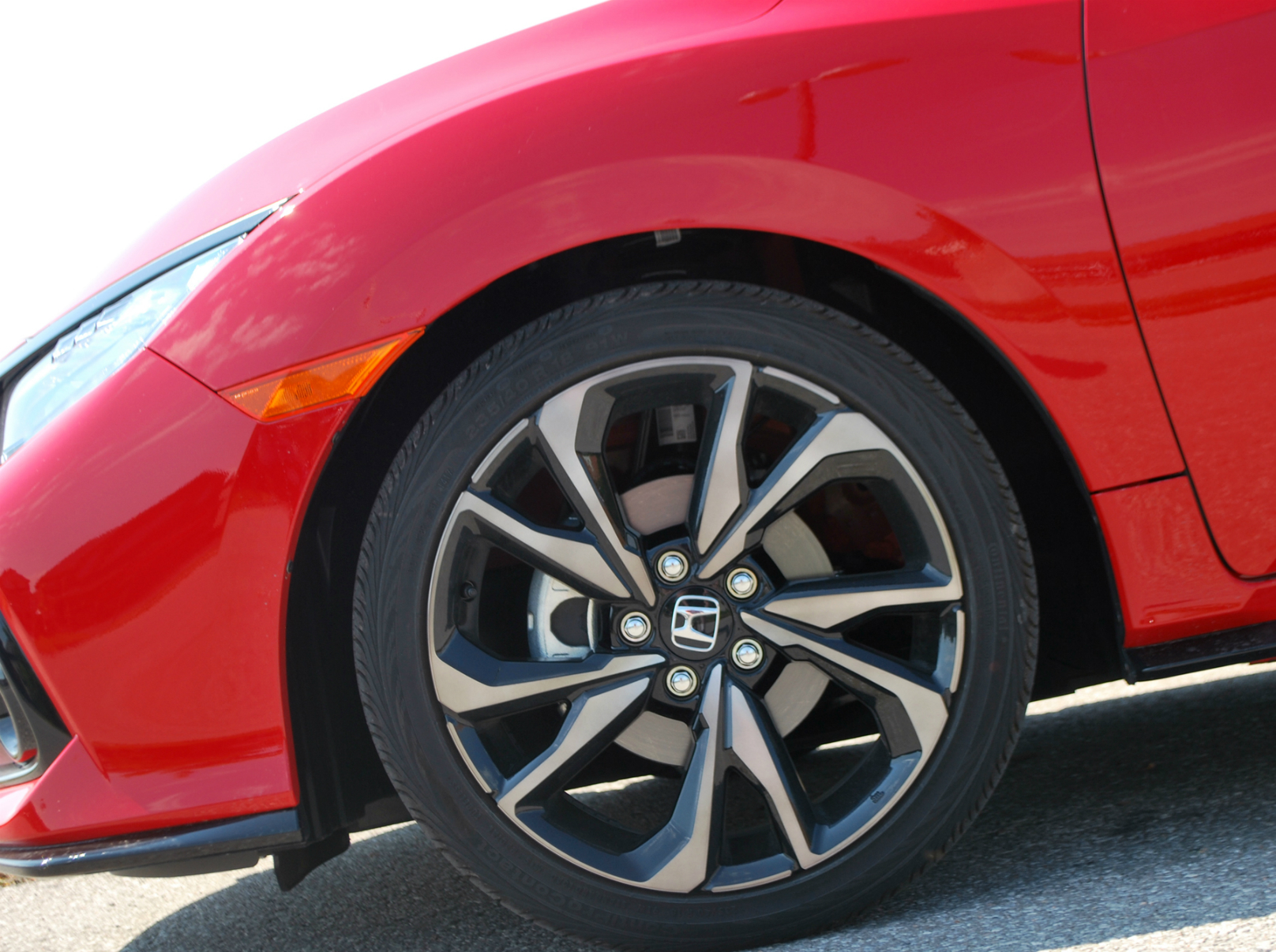 I’ve never done it but I have some friends who have left a gas cap at the station and often, which your engine light comes on, the first recommendation is to get a new gas cap to see if that puts the light out.

The Touring’s styling definitely stands out.

It is a great-looking car and, because it is also practical, it is something families should consider before moving up to a larger CUV or SUV. 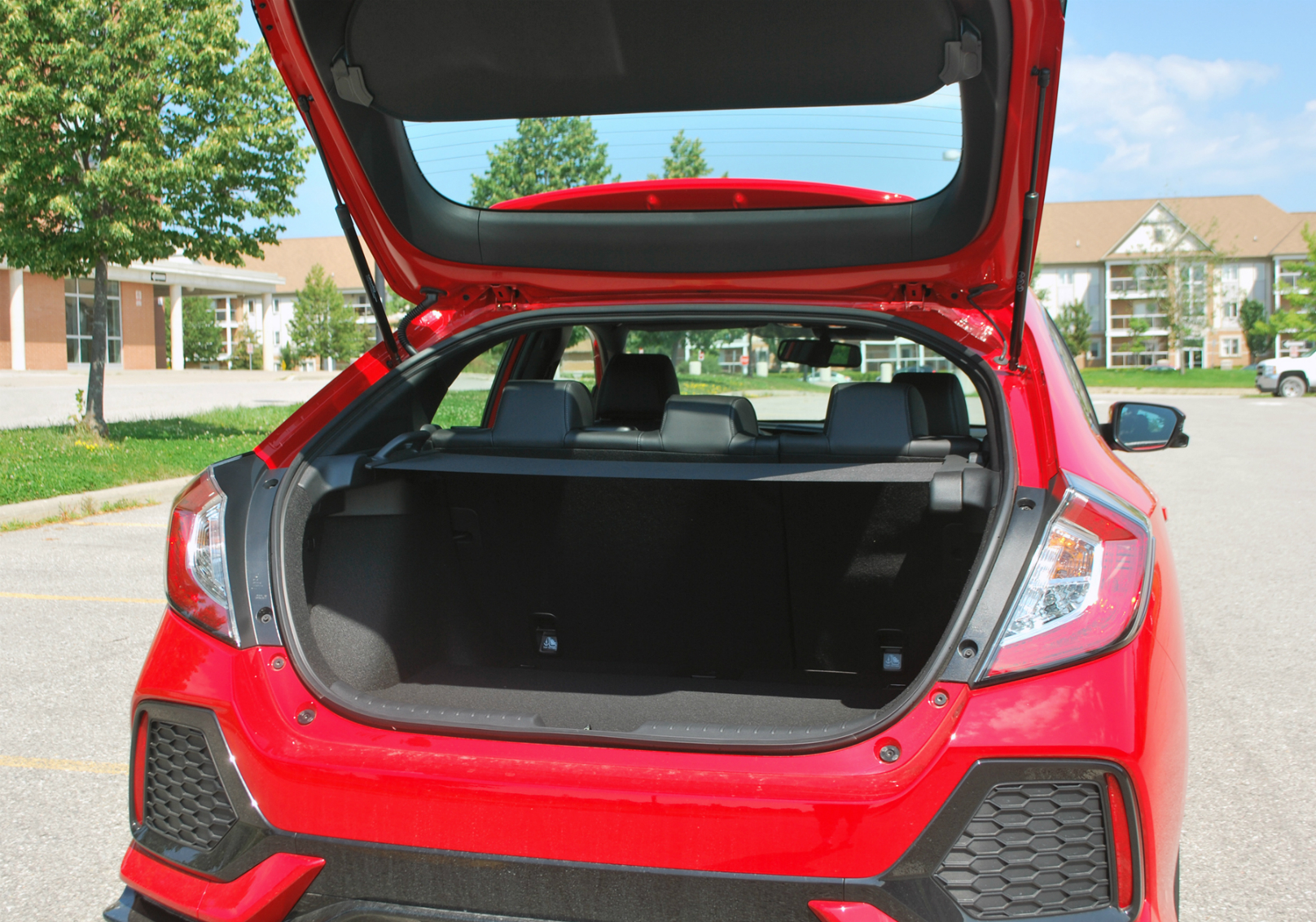