The only minivan that’s also a hybrid is a quiet, luxurious and handsome vehicle.

SANTA MONICA, CALIF.-The Chrysler Pacifica Hybrid not only might be the best all-round hybrid you can buy; it might also help resurrect the minivan segment.

That’s pretty much the ending price, too, because the option list is pretty short.

And of course, less whatever bribes your specific provincial government may be offering.

The gasoline-powered Pacifica’s combination of style, space, performance, luxurious, well-appointed interior and practicality got the minivan-resurgence mission started when it was launched last year.

The segment is nowhere near what it once was. Still, it remains the seventh-largest out of 15-odd segments the industry tracks, accounting for some 90,000 vehicles a year in Canada.

Chrysler — sorry, FCA, standing for Fiat Chrysler Automobiles — dominates the segment as it always has, with about a 70 per cent share.

The new plug-in hybrid version aims to expand that reach. 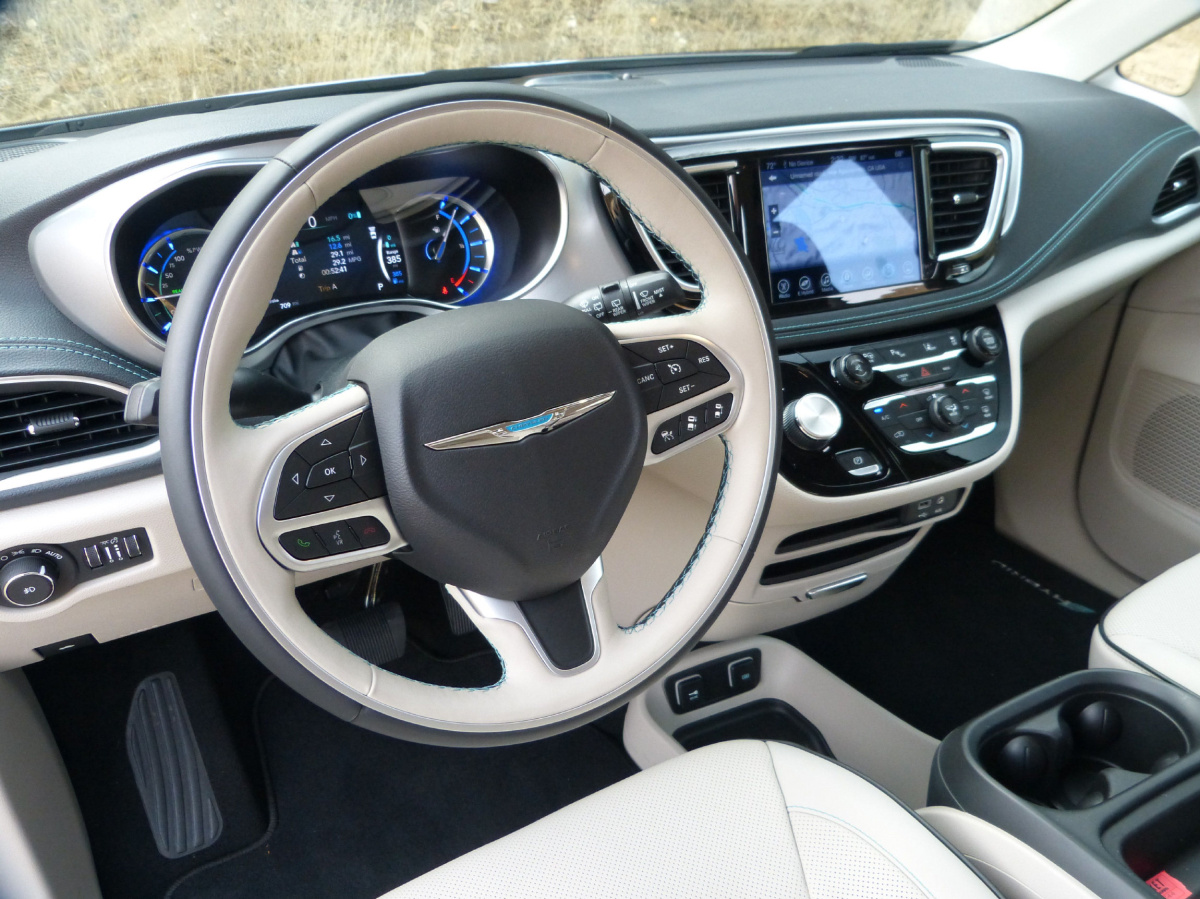 This is Chrysler’s first hybrid, if you don’t count the massive Aspen SUV from the late-oughts of which they sold dozens and dozens.

Given Chrysler’s nearly entire lack of hybrid experience, this is a remarkably well-worked out effort, with only one major problem, and that isn’t even the company’s fault. More on that later.

The hybrid gets a few exterior and interior styling tweaks — you’d almost have to be a trainspotter to notice them, but there’s a different grille texture, a couple of badges and interior trim bits in a teal blue colour (blue is becoming the new green), a unique-to-the-hybrid ‘silver teal’ paint colour, and a set of unique wheels.

Two interior features had to be sacrificed to the electricity gods. The huge lithium-ion battery goes under the middle row of seats, good for centre of gravity, handling and safety. But you lose the stow-‘n’-go folding seats in that second row, which are replaced with dual captain’s chairs.

One upside — these are significantly more comfortable than the foldable seats. And these are removable, provided you can heft their 30-kilogram weight. Stow-‘n’-go, poor grammar and all, remains in the third row.

Also, the wiring for the hybrid drive system steals space that would otherwise go to the vacuum cleaner, one of the regular Pacifica’s surprise-and-delight features.

Otherwise, Chrysler calling this a ‘no-compromise’ hybrid is a reasonable claim. 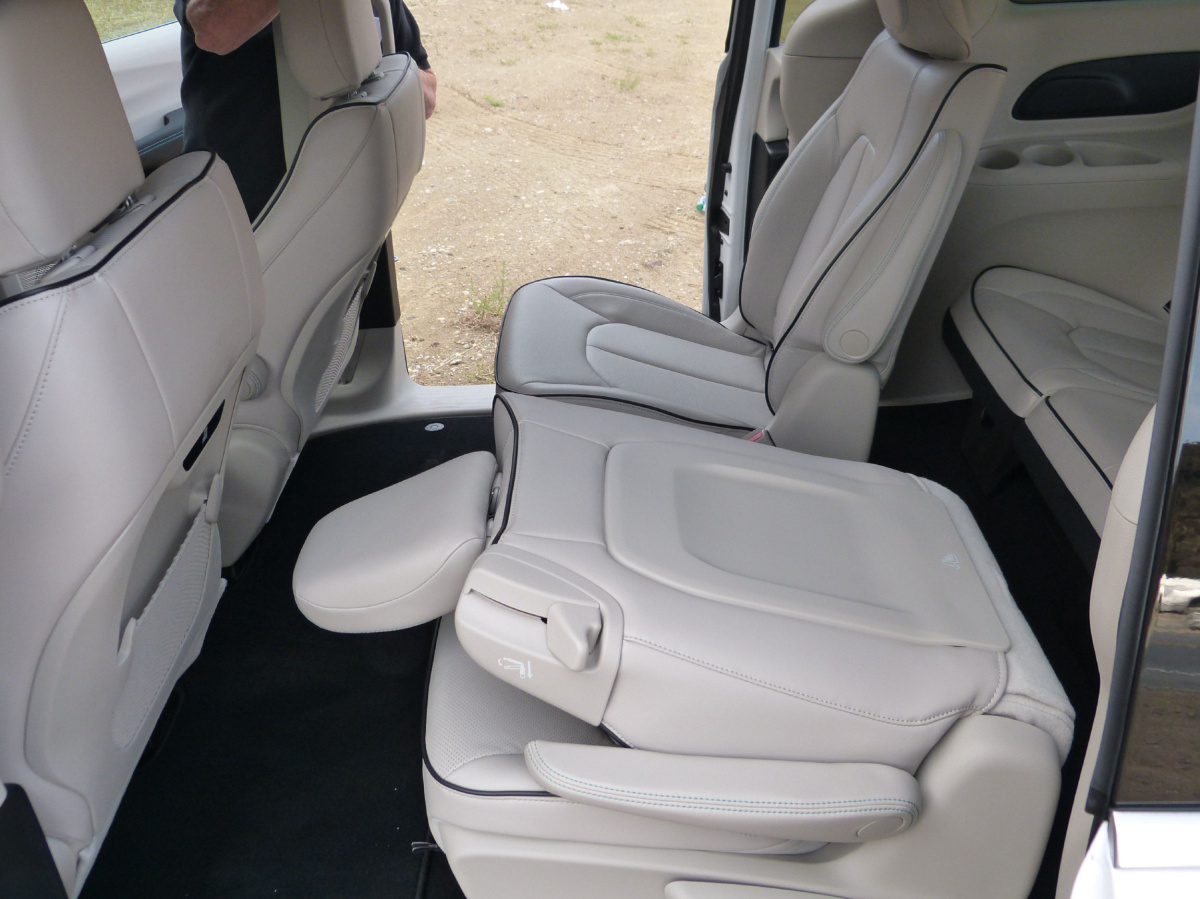 The excellent 3.6-litre Pentastar V6 gasoline engine is, like most hybrids, converted to the so-called Atkinson cycle, which keeps the intake valves open into the power stroke. The reduced pumping loss saves fuel but reduces output, which is more than compensated for by the electric drive components.

The transmission consists of a planetary gearset operated upon by the gasoline engine and/or the two electric motors to achieve the degree of acceleration and speed demanded by the accelerator pedal.

To recharge for around 50 kilometres of electric-only range, the Pacifica takes about 14 hours with normal Level 1 household current, or as little as two hours with the Level 2 240-volt system.

Interesting, though, that Chrysler does not mention in the model name that this is a plug-in hybrid.

Says Matt McAlear, senior manager of Chrysler brand marketing in the U.S., “Our research shows that when people hear the term ‘plug-in,’ it conjures up ‘range anxiety,’ as if you have to plug it in to make it work.”

Chrysler feels the minivan customer might be new to the concept, probably won’t be your typical ‘early-adopter,’ and they don’t want to scare her or him away.

Continues McAlear, “With the Pacifica Hybrid, you can drive it like a regular vehicle, because the gasoline engine is always there for you,” as, quite frankly, it is in every plug-in hybrid.

So Chrysler is calling the Windsor-built vehicle the only seven-passenger vehicle with a range of up to 850 km. 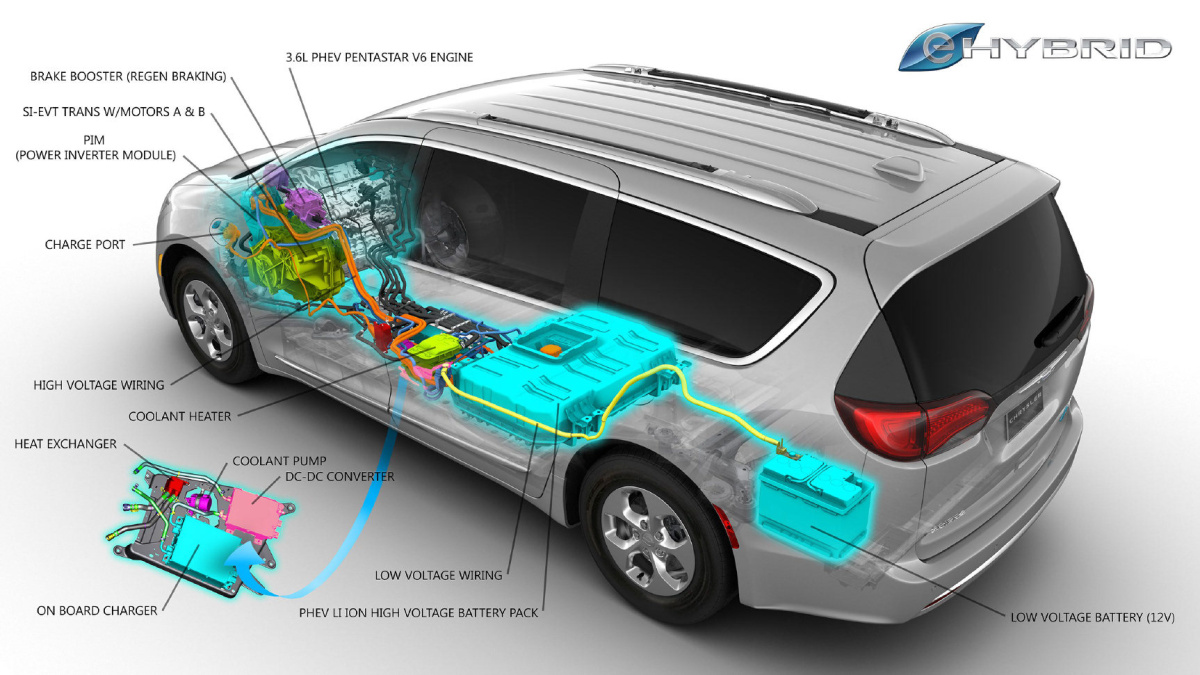 Like all hybrids, when the electric range is used up, the battery is not fully depleted. Batteries last much longer if they don’t fully charge or recharge but remain somewhere in the 20-80 per cent range.

Thus, even if the ‘pure’ electric drive range is gone, there still are some electrons left if needed for acceleration.

And when the gasoline engine kicks, it is virtually unnoticeable except for a bit of exhaust noise.

Unlike most hybrids, however, there is no switch for the driver to choose fully electric operation if battery charge is available. That fuel/battery split decision is left entirely up to the car itself. Greenies and hard-core electric car fans might prefer the choice, but for the ‘average Jane and Joe’ to whom this car is aimed, this is probably the right decision.

There are screens within the standard touchscreen control unit to keep you abreast of how you are doing, and to coach you on how to drive more efficiently.

Hybrids make engineering sense because their essence is to capture otherwise-lost kinetic energy and use it to help power the car. (As long as gasoline is generally the cheapest fluid you can buy in a gas station, hybrids don’t make economic sense, but that’s a separate discussion.)

The energy is captured via regeneration when the car is coasting and/or being braked, the motor turning into a generator and recharging the battery as you drive.

In the Pacifica hybrid, initial travel of the brake pedal dials in the electrical regen braking. Below about 12 km/h, the friction brakes take over.

The trick is getting the two braking systems to work in a smooth, integrated fashion with an imperceptible ‘hand-off’ between systems. I have to say Pacifica does this better than any hybrid I’ve driven.

In our drive in the Malibu hills, the car performed very well, with good launch and mid-range acceleration, even up those hills.

The Hybrid model is some 278 kg heavier than the nonhybrid, mostly due to the electrical gubbins (some is due to a higher equipment specification).

The suspension has been beefed up to handle the extra weight, which maintains the Pacifica’s surprisingly good road manners. You probably won’t be taking it out to track days, but the big vehicle rides and handles way better than it needs to in order to fulfil its duties.

At a mid-drive coffee stop, we found ourselves about as high (elevation-wise) as you can get around here, which had exhausted the electric drive range.

There was an unofficial competition on the run back down to the coast to see who could get the biggest percentage of battery recharge with the regen braking. 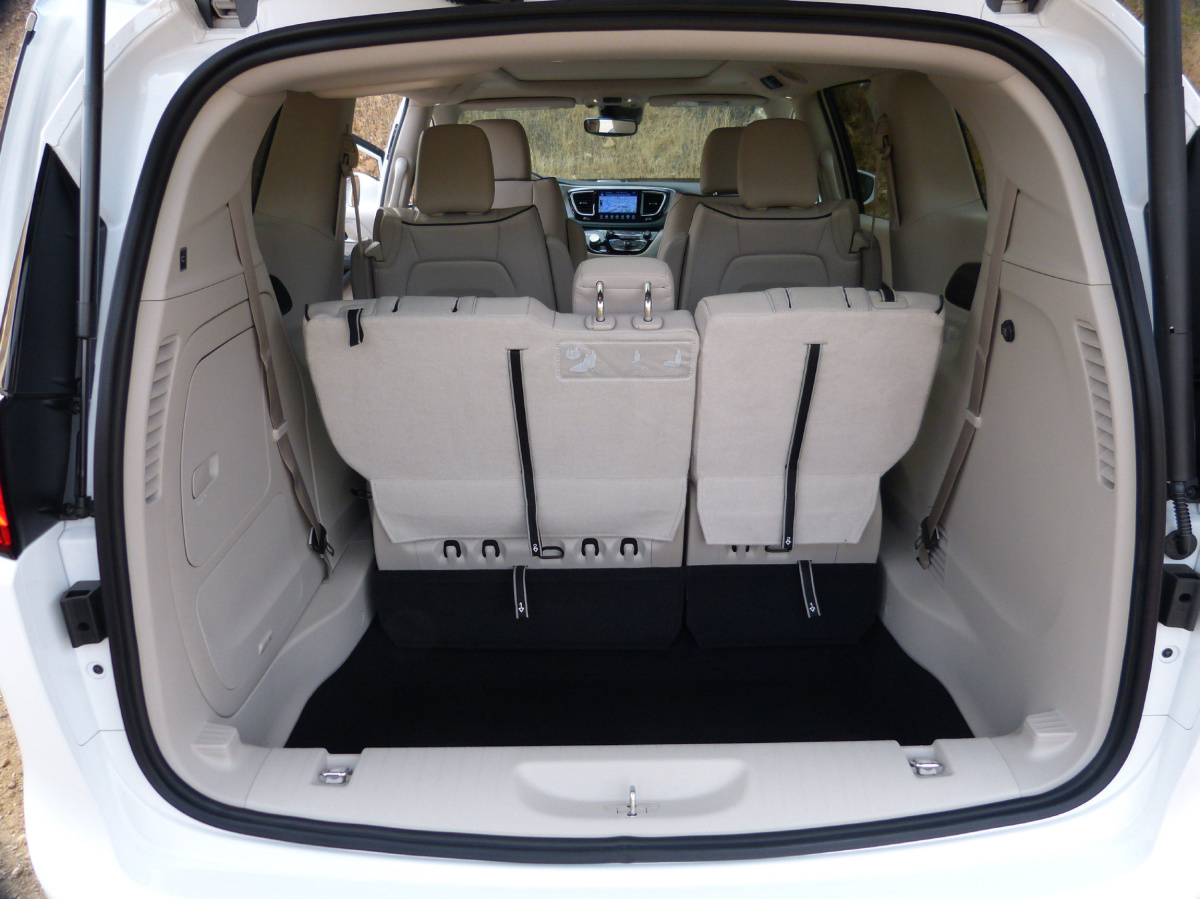 What approach would work best? Just coasting in gear? Lightly applying the brake pedal to engage regen but which would, of course, kill momentum?

We didn’t have time to compare the options back-to-back, but I did manage to regain 18 per cent, which was more than most of my colleagues.

But during the run downhill, we got passed — smoked, even — by a car going about 145 km/h. It was a Toyota Prius hybrid, which, for some reason, I found terribly funny.

Now, that major problem that’s not Chrysler’s fault? It’s those government bribes. I recently covered this in some detail so will only repeat that I don’t understand why there isn’t rioting in the streets over this egregious waste of your and my tax dollars. If you can live with stealing money out of my and your neighbour’s pockets, the Pacifica hybrid is a pretty interesting choice for a family vehicle.

I’ve never understood why minivans have such an uncool rep. Why is being smart never considered cool?

You can carry your own family, probably some of your or their friends, and/or loads of cargo, in a quiet, luxurious, handsome vehicle, for almost as far as I can go in my Diesel station wagons. 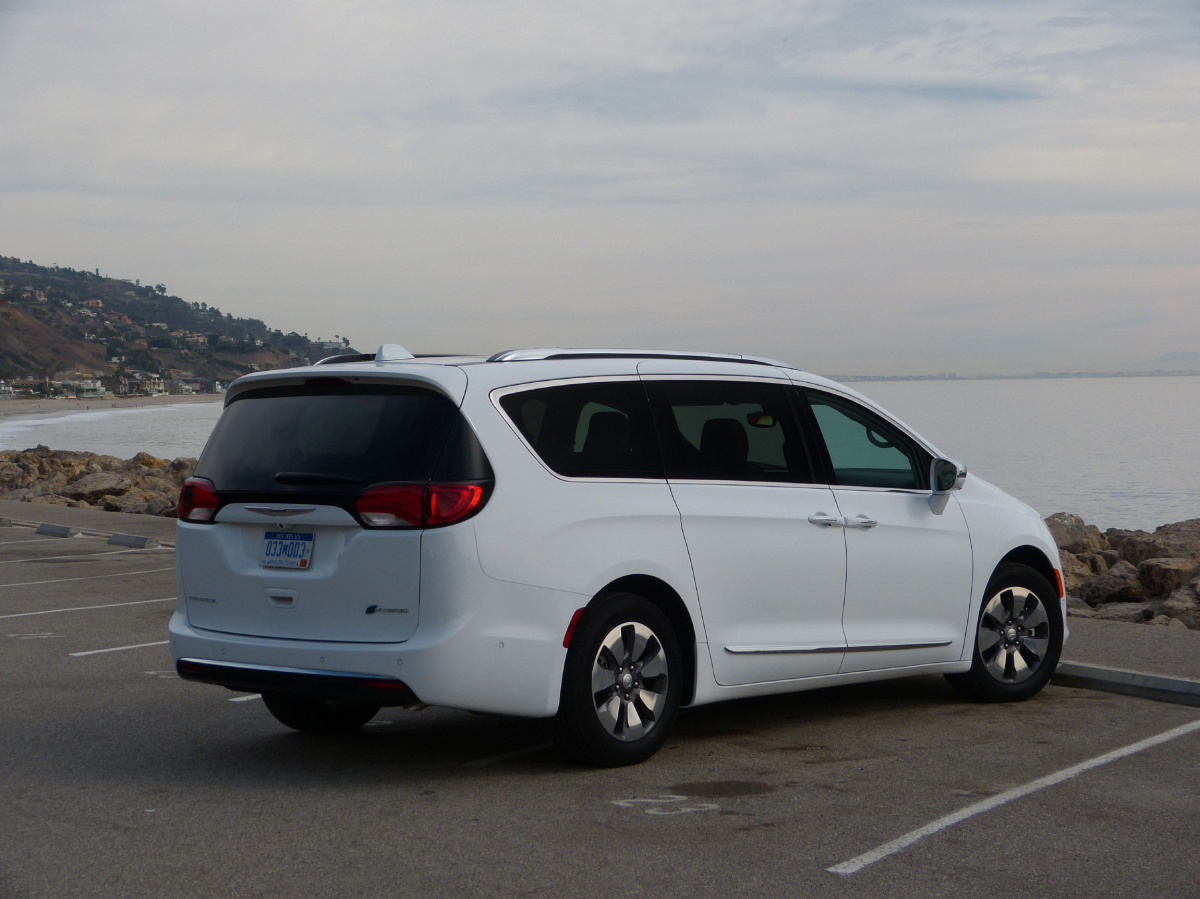