The 2016 Spark isn’t the sharpest cheap car out there, but it packs a lot of tech for ten grand.

Back when I first started driving, my car doors unlocked with a key, the mirrors had manual adjustment, and “air conditioning” was when I spun the handle to crank down the window.

And here I am again, doing all of that in the latest version of Chevrolet’s little Spark.

For a short while, the redesigned 2016 Spark was Canada’s least-expensive car, its base trim chiming in at $9,995. That undercut the Nissan Micra, which was introduced at $9,998, but Nissan has since lopped ten bucks off it to regain the cheapest car crown.

Now you can go much fancier in the Spark, of course, with trim lines that go up to $18,195, where you’ll get such goodies as a sunroof, parking sensors, push-button start, “leatherette” seats, lane departure warning, and forward collision alert. But even the base model has more features than I would have expected, including a few that aren’t in the Micra. 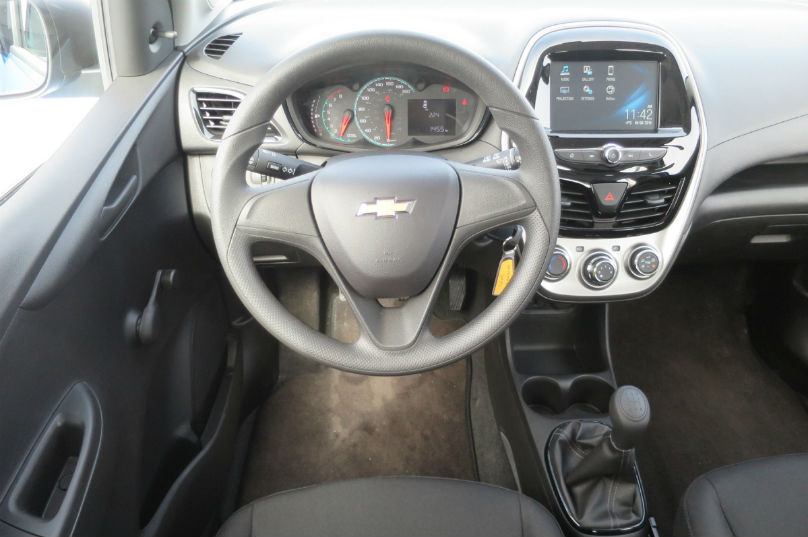 All Spark models use a 1.4-litre four cylinder engine that makes 98 horsepower. That’s not much on paper, but it’s actually quite peppy in this light little car, especially with my tester’s five-speed manual transmission. Hill start assist, which holds the brakes for a few seconds while you’re swapping your foot between the brake and the clutch, is standard equipment and a great aid for those who are relatively new to a stick shift. And it’s also a great feature for when you’re on really steep hills, even for those with experience.

The steering response and handling aren’t as sharp as in the Micra, and the Spark’s turning circle is very wide for something this small. But the clutch and shifter have a much-pricier feel to them. While a sixth gear would be appreciated on the highway, where the engine works hard to maintain higher speeds, having only five is part of keeping the price down. 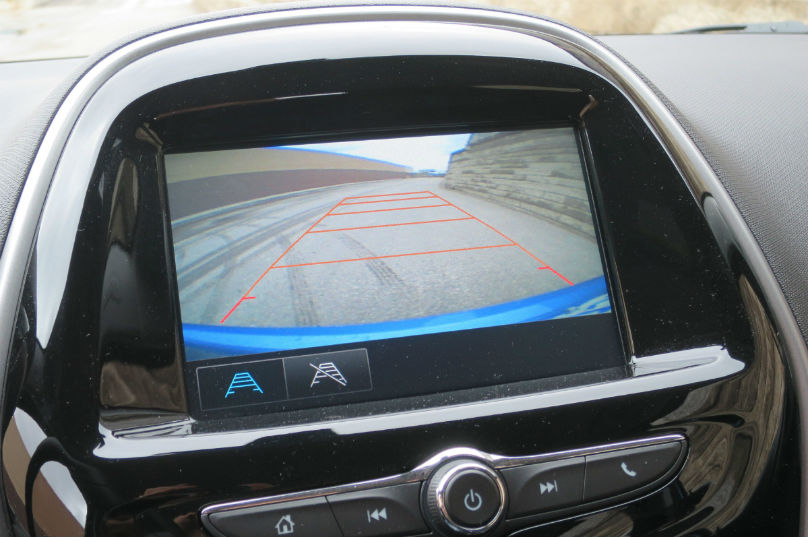 The available automatic is a continuously variable transmission (CVT), and here’s where you have to start playing with the numbers. Should you want to add air conditioning to the base LS trim level, you also have to take the CVT, which brings your Spark to $13,895. Air conditioning is included on the next two trim lines, the 1LT where you can get a stick shift or a CVT, and on the 2LT, which is CVT-only. If you want a Spark with a manual transmission and A/C, the cheapest version of that is $14,195. Over at Nissan, the least-expensive Micra with that combination is $13,848.

Built in Korea, as was the Chevrolet Aveo that it replaced, the Spark now gets some design improvements, including smaller headlight panels and better-integrated tail lights. But the base model’s liftgate can only be opened by inserting the key, so if someone just needs to throw something in the back, you have to shut the car off and hand over the key unless you also carry the spare one. 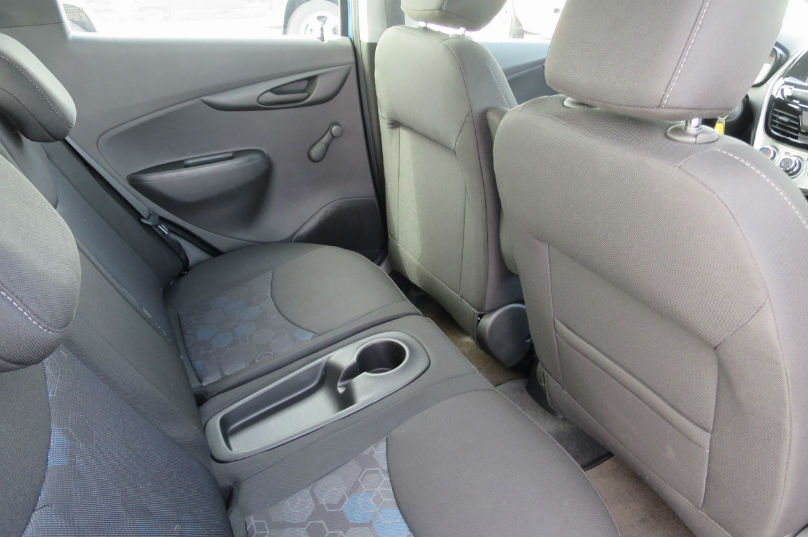 The Micra’s hatch has a much more user-friendly exterior latch. It also seats five to the Spark’s four, although those three in the Micra’s rear seat better be very good friends. Folding the rear seat in either one requires a couple of steps, rather than one-lever operation. But the base Spark also has ten airbags to the Micra’s six, and includes a seven-inch touchscreen with phone app integration, USB port, driver’s-seat armrest and automatic headlamps that the Micra doesn’t. It also has better published fuel economy and a longer powertrain warranty. 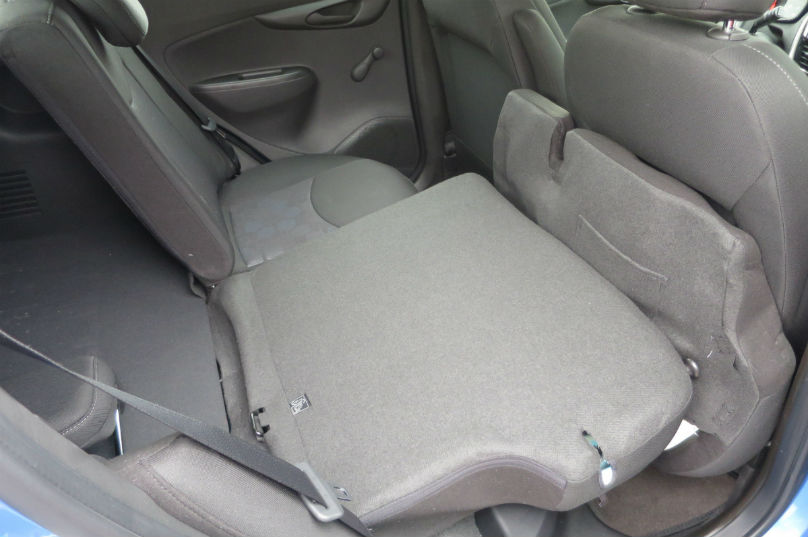 For ten grand each, the Micra drives better, while the Spark gives you more for the money. Both can be a comparably-priced alternative to a used car, but with potentially easier financing and a factory warranty. Of course, most buyers will probably look at that “no A/C” thing and go home with a pricier trim line. But for those of us who don’t mind crank-down windows and a bit of summer stickiness, the base Spark is a pretty good deal. 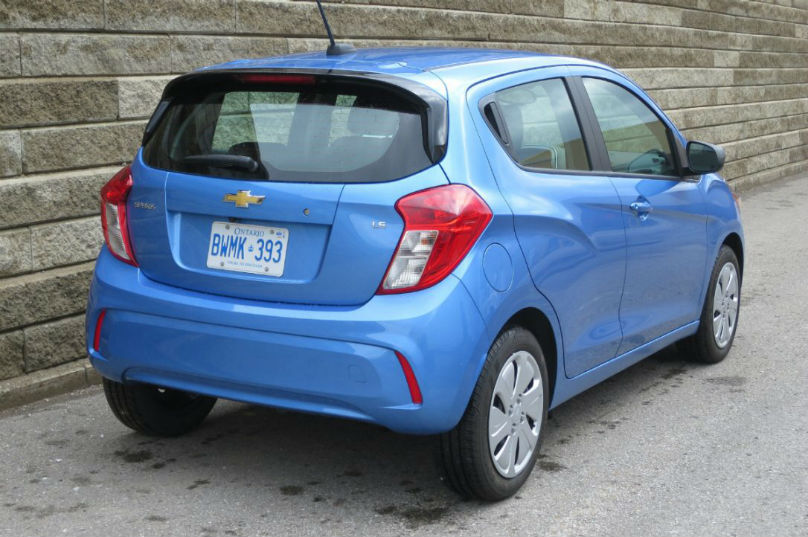 ACCESSIBILITY: Easy to get in and out, but rear seats require three steps to fold

LOOKS: Updated styling looks much better than before

INTERIOR: Centre screen and controls look like they belong on a pricier car

PERFORMANCE: Not the sharpest handling car, but gets you where you’re going

WHAT YOU’LL LIKE ABOUT THIS CAR: A brand-new vehicle at a used-car price

WHAT YOU WON’T LIKE ABOUT THIS CAR: Really wide turning circle