The Bolt EV has certainly taken the affordable electric vehicle market to a new level, the range and technical innovation is way ahead of its competitors

PALO ALTO, CA: It’s always been a big no-no mixing electricity and water, but when you are in a soaking wet Silicone Valley to test out Chevrolet’s fully electric 2017 Bolt EV, you don’t have a choice but the end result is far better than expected.

Chevrolet has classified the Bolt as a crossover, but my first impressions were more of a large hatch.

It isn’t until you get into the vehicle do you actually appreciate what Chevy have done with the internal space that makes it truly utilitarian.

By neatly hiding the lithium-ion battery pack under the floorboards, makes the cabin airy and spacious with great all around visibility.

By slimming down the front seats the designers have managed to add generous legroom for rear-seat passengers. Headroom hasn’t been compromised in either the front or rear with ample space for passengers in excess of six feet tall.

Where Chevrolet has gone above and beyond is designing a drive train that will allow the Bolt EV to drive for up to 382 km on a single charge, but doesn’t compromise handling in the least. 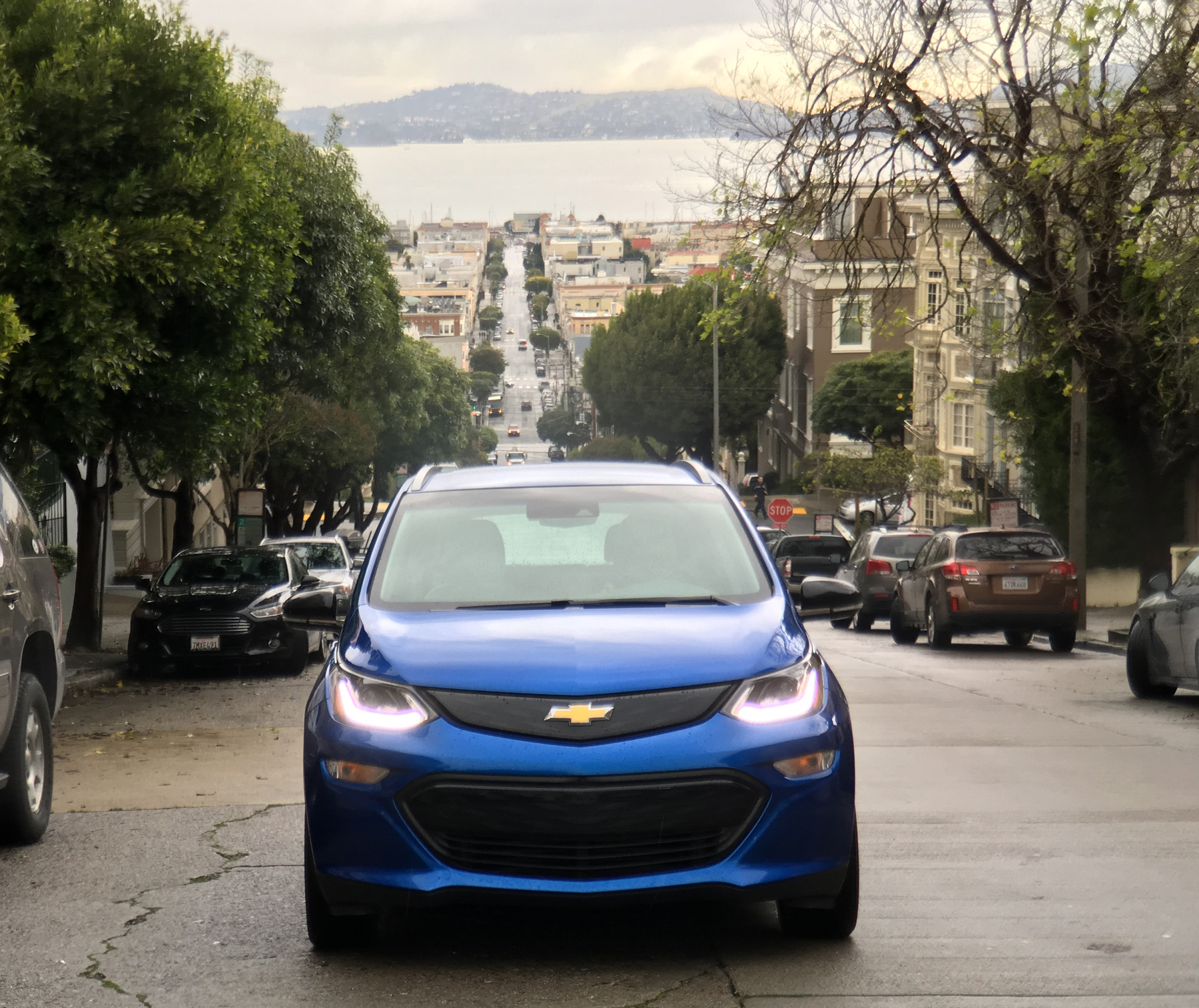 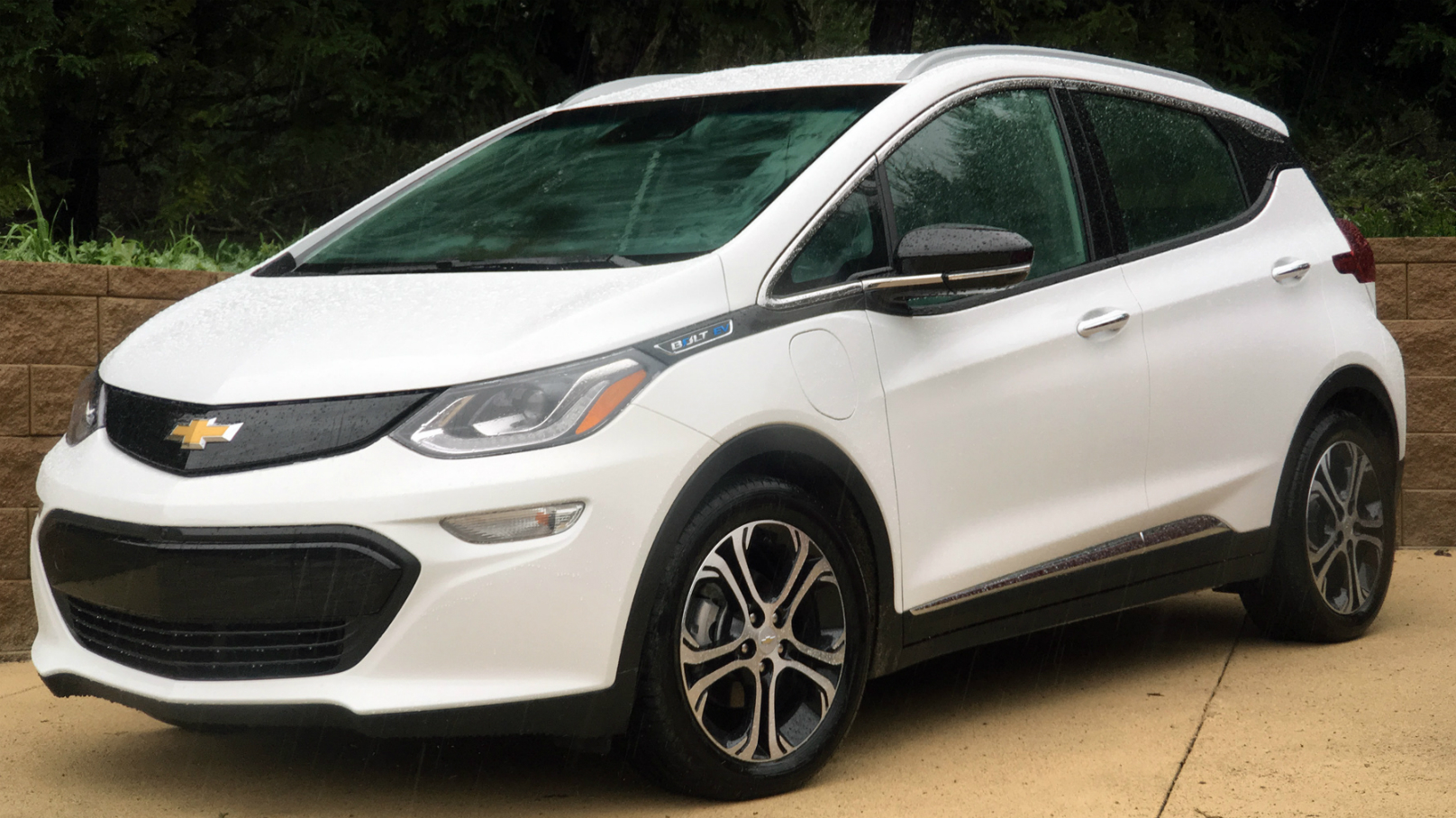 Bolt EV’s Drive system uses a single, high capacity electric motor that gets its power from a 60 kWh lithium-ion battery pack that is capable producing up to 266 lb/ft of torque and 200 hp.

In the past when driving fully electric vehicles I’ve had to adjust my driving techniques to accommodate the nuances of the car and try to avoid range anxiety.

This time was a little different, the Chevrolet design and engineering team actively encouraged me to drive the Bolt EV as if I was in a gasoline driven car. With this in mind I headed out into the hills in and around the San Francisco area. 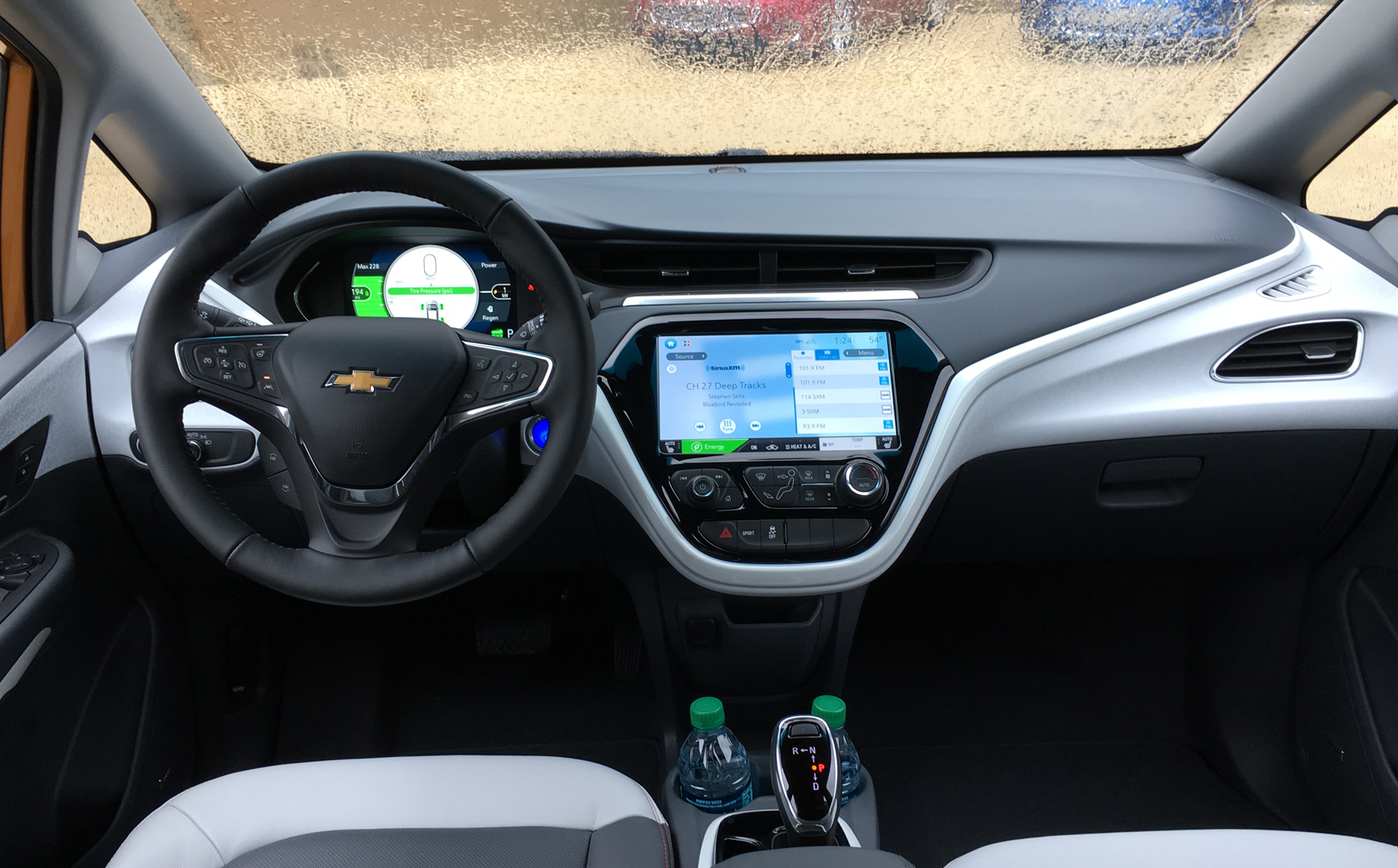 The Bolt EV’s acceleration was instant, smooth and very noticeably quiet. The twisty uphill sections demonstrated the smoothness of the shift-by wire system as well as the precise steering.

Bolt EV had a trick up its sleeve when it came to regenerating power. By putting the shifter into low-mode – and by use of a paddle situated on the steering wheel – you can enter what Chevrolet calls “one-pedal driving” in effect it eliminates the use of the brake pedal.

You accelerate as normal but as soon as you ease up on the accelerator, the car will decelerate, without the use of the brakes, reclaiming the energy being generated to recharge the battery. 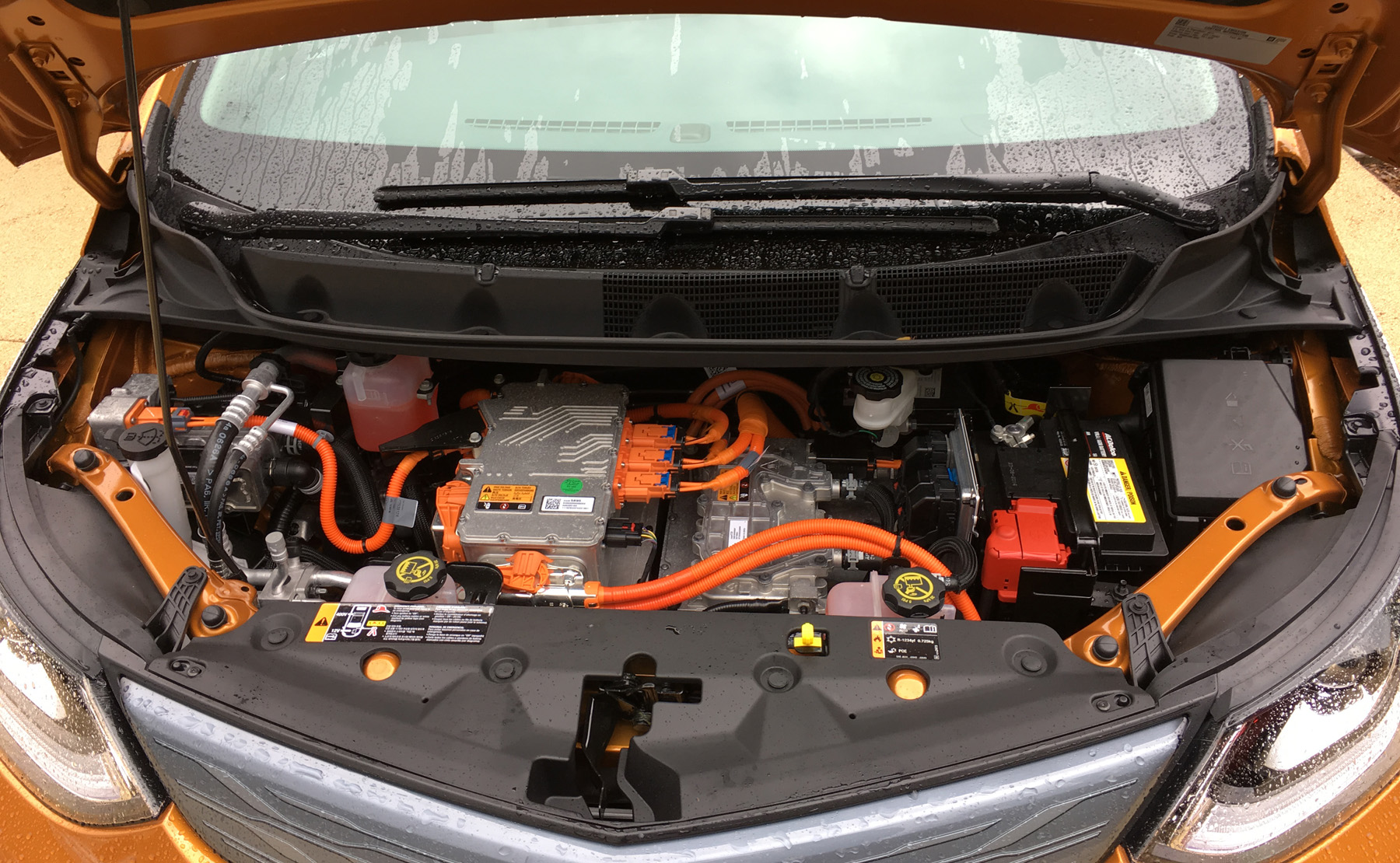 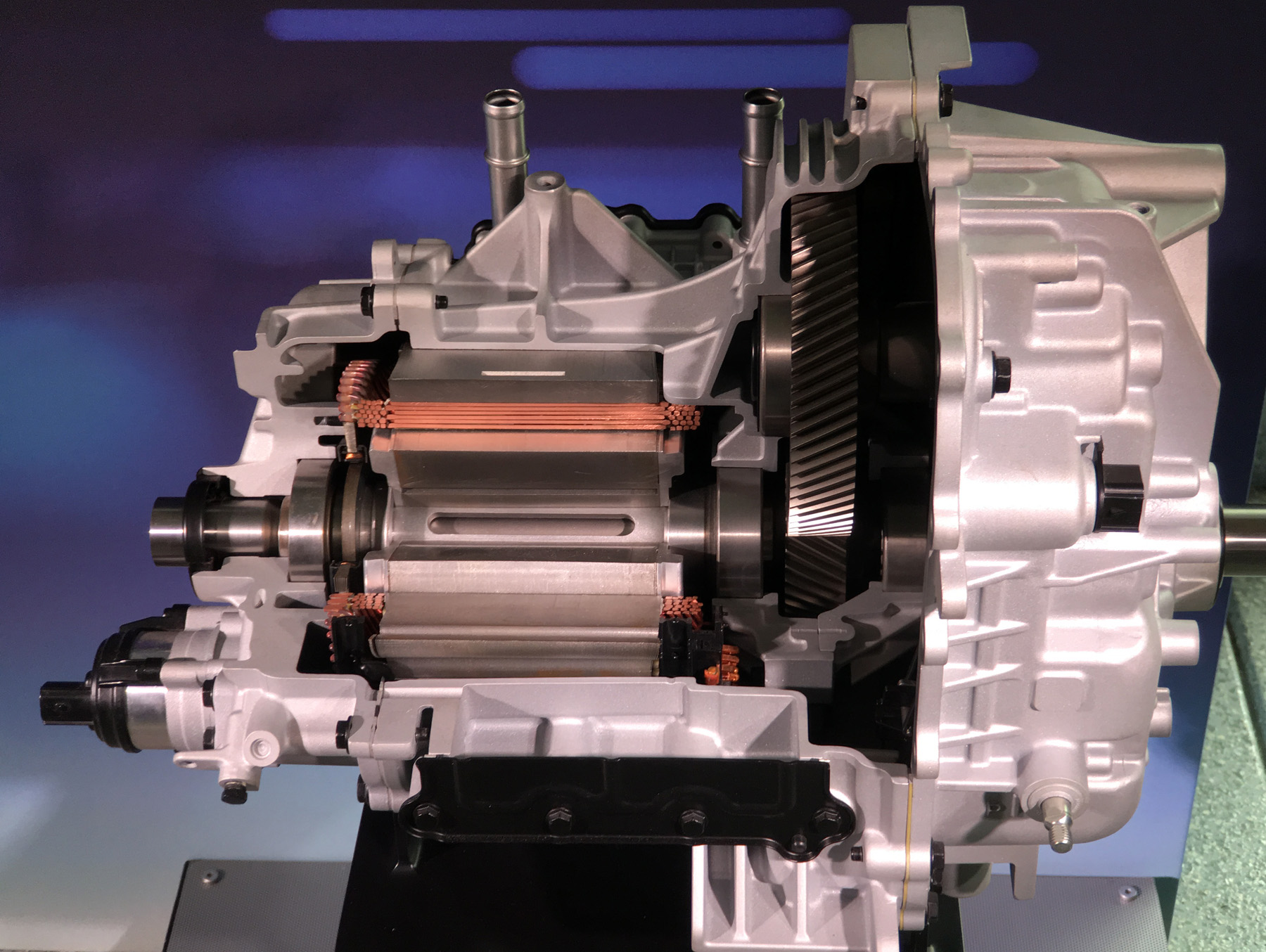 This can be further assisted by use of the steering wheel mounted paddle shifter to decelerate more aggressively; it takes a short learning curve to be able to balance the deceleration using the paddle, but once mastered it totally eliminates the use of the brake pedal all together.

Another clever function that has been introduced in the Bolt EV is the “no creep” function. When approaching a stop sign or traffic light you decelerate by lifting off the pedal and the vehicle will come to a complete stop – and stay there until the accelerator pedal is depressed again.

This was a very handy feature especially when driving up and down the hills in San Francisco.

During the drive portion I pushed the car and drove it, as advised, like a gasoline engine car and I must admit that I only found myself looking at the remaining range a couple of times.

I drove about 200 km in open country as well as in heavy downtown traffic and by the end of the drive I had just used half of the charge.

The Bolt EV has certainly taken the affordable electric vehicle market to a new level.

The weather didn’t play along either. It was torrential rain for most of the drive so I had the rear defroster, windshield wipers and the heater on constantly which didn’t seem to impact the range at all.

The Bolt EV has certainly taken the affordable electric vehicle market to a new level.

The range and technical innovation is way ahead of its competitors and has now proven that an electric vehicle has the functionality and utility of its internal combustion engine predecessors.

The price does seem a little excessive for a vehicle of this size, but with provincial incentives and especially fuel savings, quickly evens the playing field. 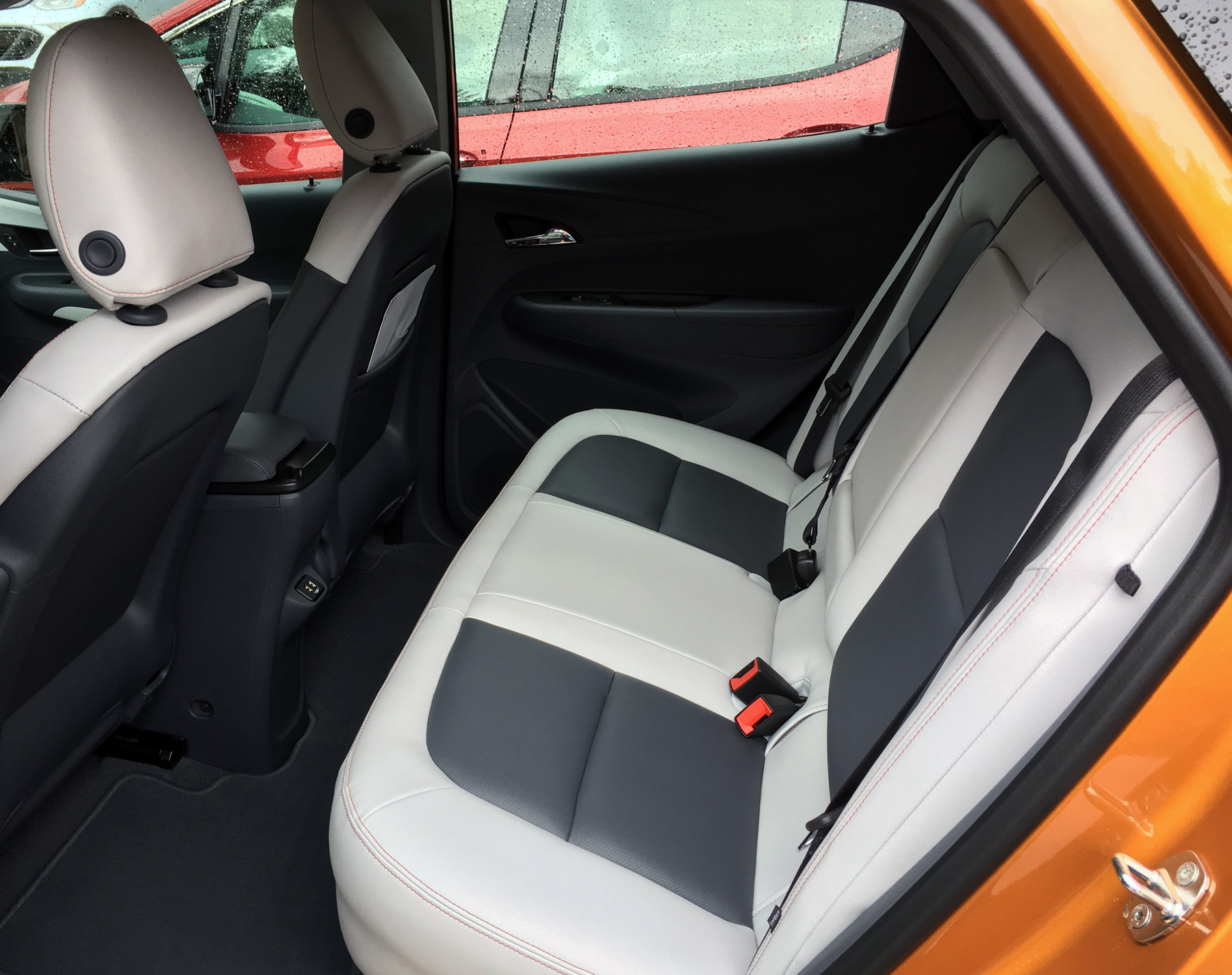 PRICE: Starting at: $42,795 (without provincial incentive)