Of course I drove it with the top down!

Canadians love convertibles probably because our inclement weather will always be a factor so we want as much fun in the sun as we can get.

Ergo, the middle of January was not going to stop me or this week’s tester, the 2016 MINI Cooper Convertible.

With the sun out and temperature showing on the instrument cluster as +5 Celsius, I dropped the power top, rolled up the windows, turned up the heat and roared off up the highway heading north.

Strangely, the apparition of the Cooper and me did not result in other drivers craning their necks to look. Rather they just rolled by with nary a glance.

Painted in Caribbean Aqua Metallic with optional 17-inch Cosmos Spoke Silver alloy wheels, the MINI Cooper had an irrepressible jaunty look about it. 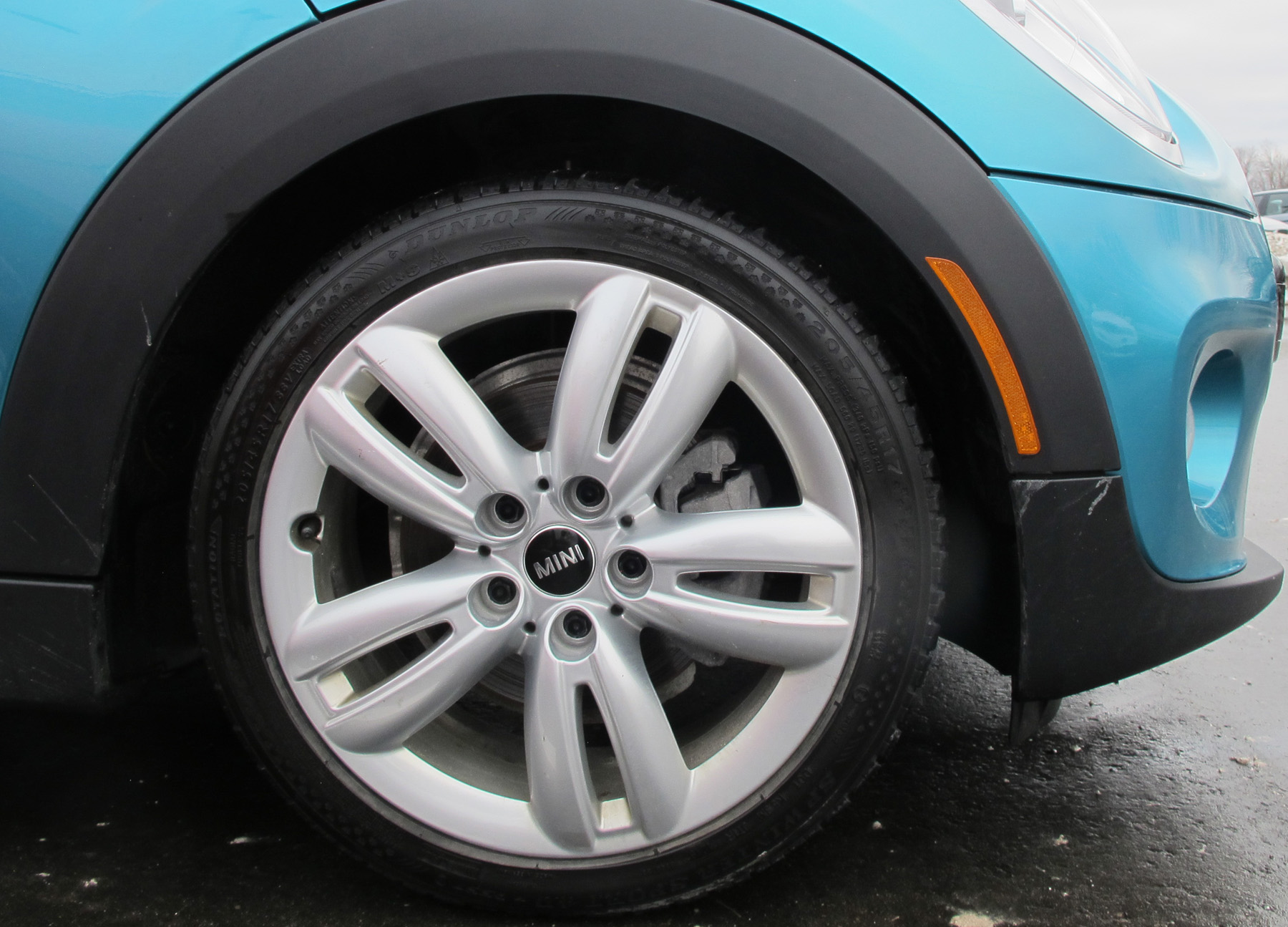 The thing about the MINI, any MINI for that matter, is it looks like a load of fun – and it is.

With its cheeky styling and playful features such as the whole design and execution of the instrument panel and gauge placement, the MINI screams “let’s go”.

Besides the dinner plate-sized central display, you notice toggle switches just about everywhere. Besides the iconic shape, toggles are a signature design cue going back to the very first Mini. The brand name changed to “MINI” from “Mini” when BMW took over the ailing British Leyland just before the start of this century.

The original Mini was created as a super cheap small car, with price being all-important in the 1960s when England was just starting to emerge out of the economic after- effects of World War Two.

So the Mini was built with whatever was lying around or came to hand, such as the surplus to requirements toggle switches used in combat aircraft.

Today, the MINI may be the only car in the world you start the engine with a toggle instead of a key or button. 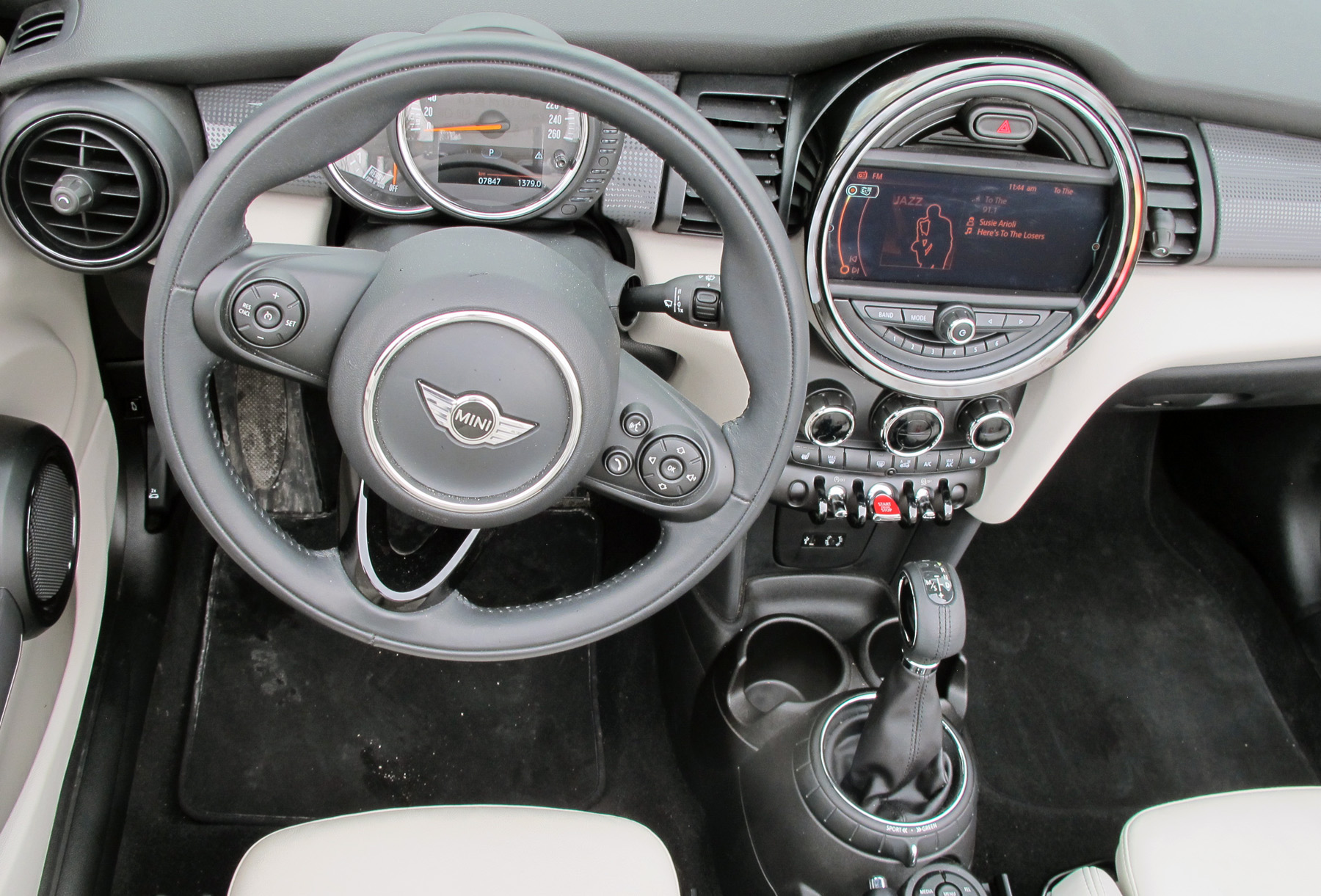 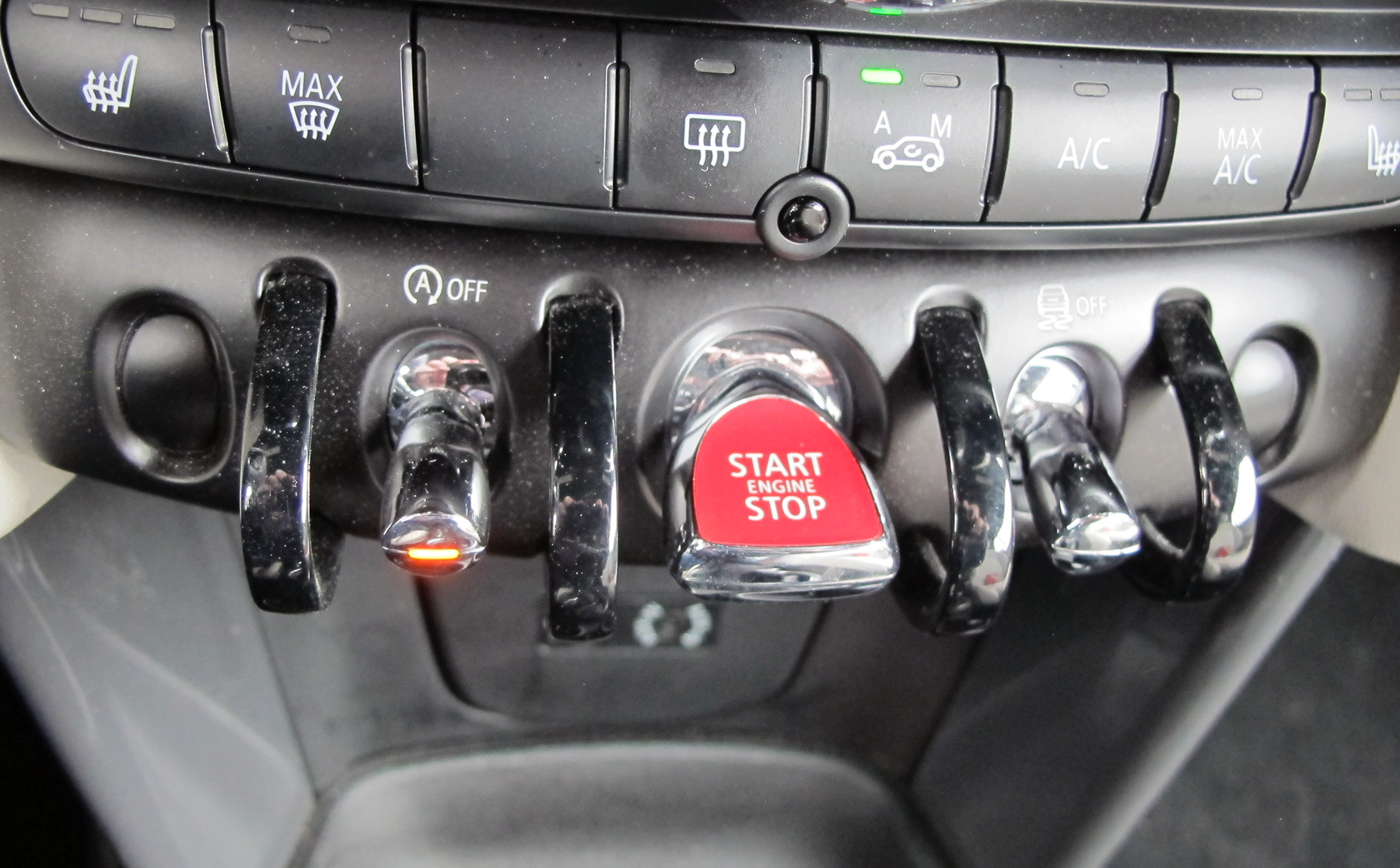 Of course the brand has grown the little economy car into a big thing with six basic models in 17 variations, if you don’t count the John Cooper Works specialty performance sub models.

There are three convertibles available — the Cooper and Cooper S and the John Cooper Works model based on on the Cooper S. They are differentiated by engines employing BMW Twin Power technology, which is BMW-speak for direct injection and twin turbos. 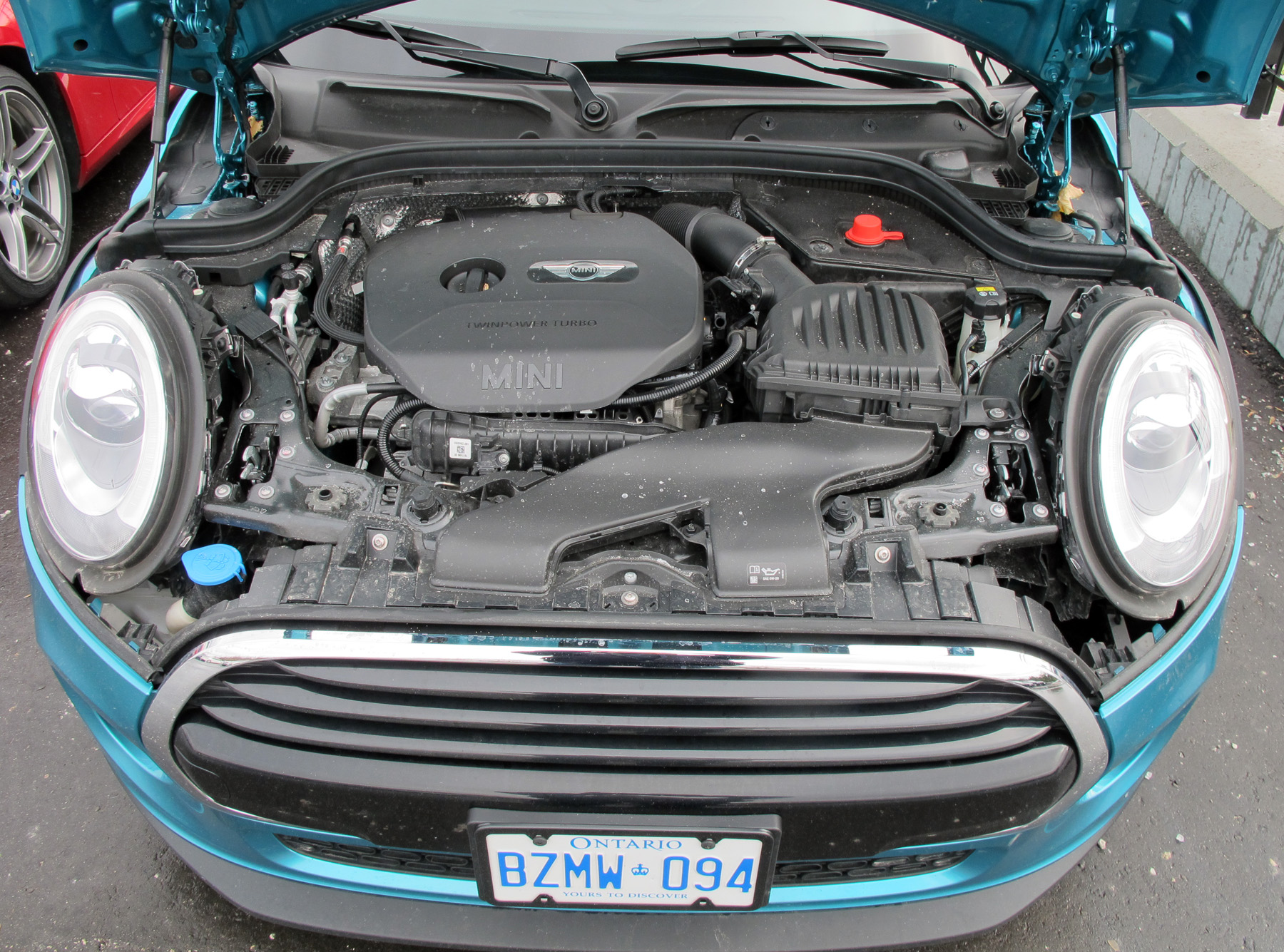 If you order the automatic, there is a toggle on the rear of the shifter bezel with three settings – Green, Mid and Sport, which change drivetrain response.

The power top is a very complicated system that goes up and down at a touch of a toggle placed along the top of the windshield, which does the job in about 15 seconds.

The only drawback is the large cloth section, between what we think of as the B- and C-pillar, completely blocks rearward vision. And if the rear/heated glass window is covered in grime, backing up is best done with the top down where a rearview camera would do the trick.

The weight of the convertible top mechanism does impede the “go-kart” like handling to a minor extent, but this is not the kind of MINI you throw around. 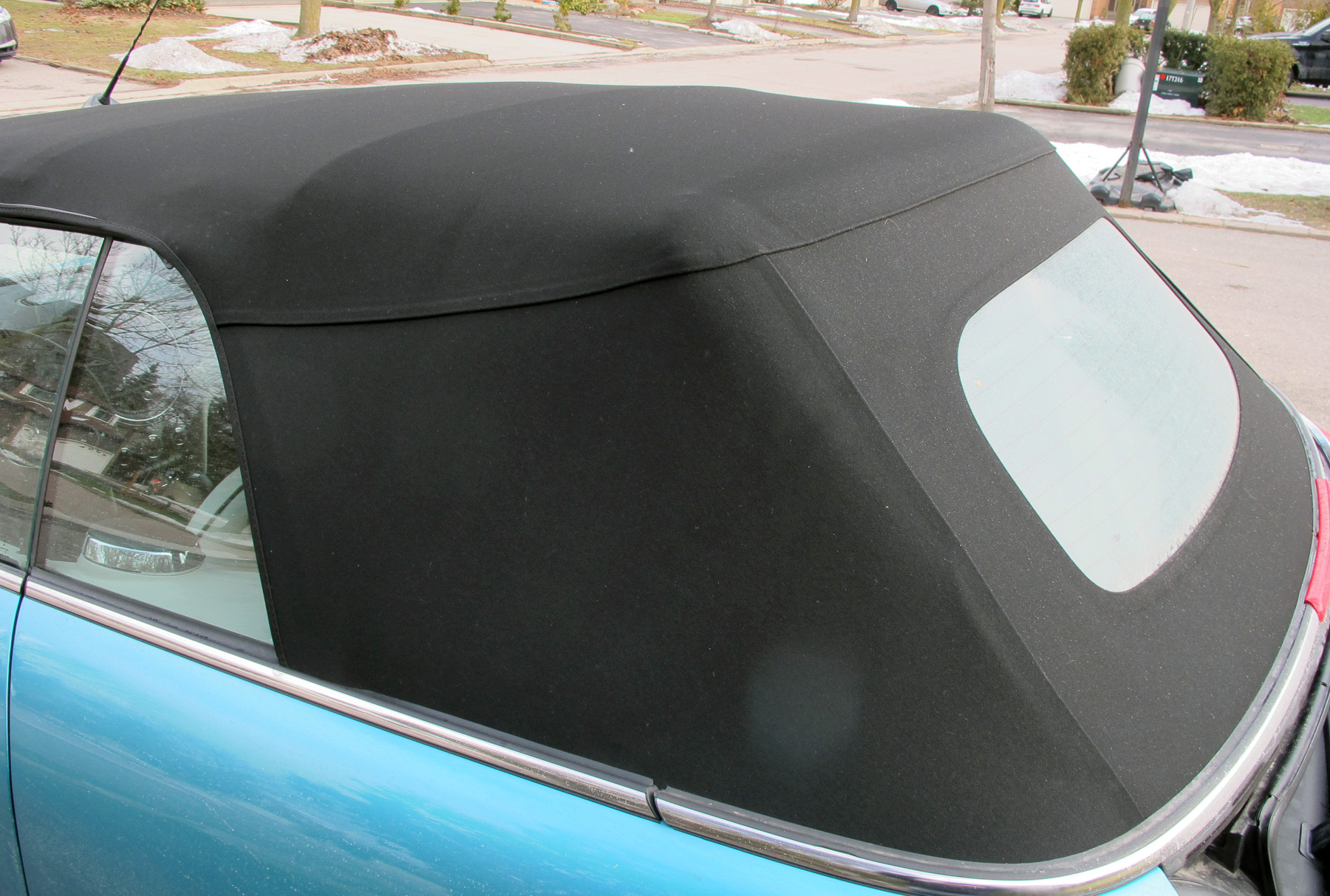 Still, the wide wheelbase for the length of the car and very short overhangs front and rear let you know where each wheel is and how finely you can cut the corners.

In a straight line, it feels solidly placed, thanks to the width of the front and rear tracks which work well with the MacPherson strut front and multilink rear suspensions.

Where the Mini Cooper shines is the fun factor one gets from driving it.

It’s one of those cars where any excuse — such as going for the groceries or picking up the dry cleaning — is reason enough to go out for a spin.

Get out and buy the MINI Cooper Convertible while you still can before the autonomous machines and lawmakers take it away.

MINI Cooper Convertible 2016 at a glance