You only get one road through life and I can’t imagine a better way to travel it than in the Cayman GT4.

Always one of the best road-going sportscars on the road, the Cayman GT4 joins the expanding Porsche GT family.

These cars eschew luxury and refinement for elevated levels of ride, performance and handling being described by Porsche “to promote hard-core two-door sportscars of the future”.

These GT family cars are developed by Porsche’s motorsports department, and in the case of the Cayman GT4, it derives its go-power from parts use on the mighty 911 GT3.

In many ways, the Cayman GT4 reconnects to Porsches of the late 1980s and 1990s in the immediacy of the way the car reacts to the slightest inputs. 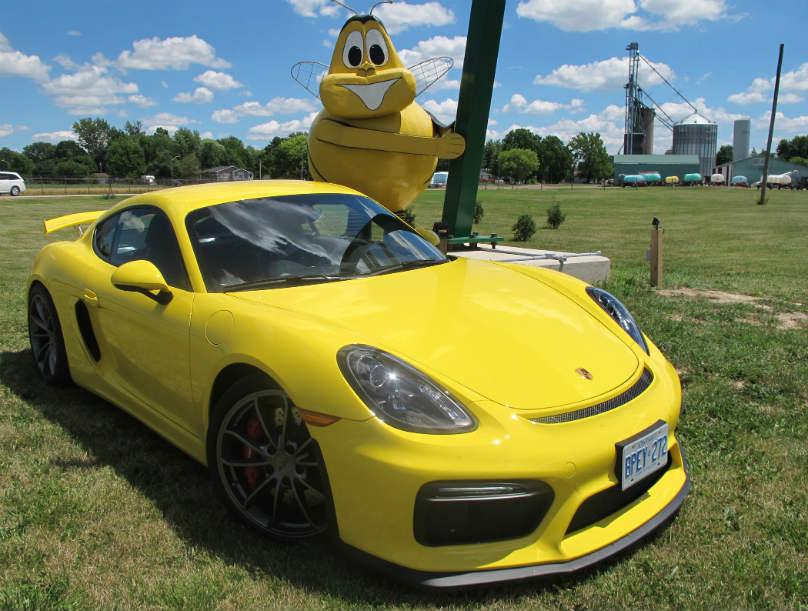 The GT4 is powered by a 3.8-litre, DOHC direct injection “boxer” six-cylinder based on the engine in the current 911 with a six-speed manual transmission driving the rear wheels.

There is a mechanical locking rear differential that includes the Porsche Torque Vectoring (PTV) system while the power steering is electric with variable steering ratio. 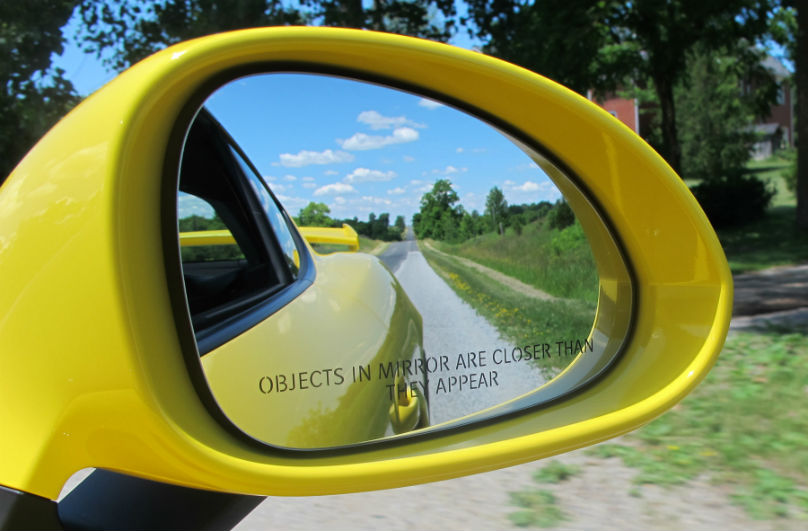 Crank the steering wheel to the left or right and the GT4 reacts by placing itself exactly where you want it to be.

Punch the throttle and you get the same thing – response now.

This is heighted by the “Sport” button on the centre console that opens everything up for added acceleration. 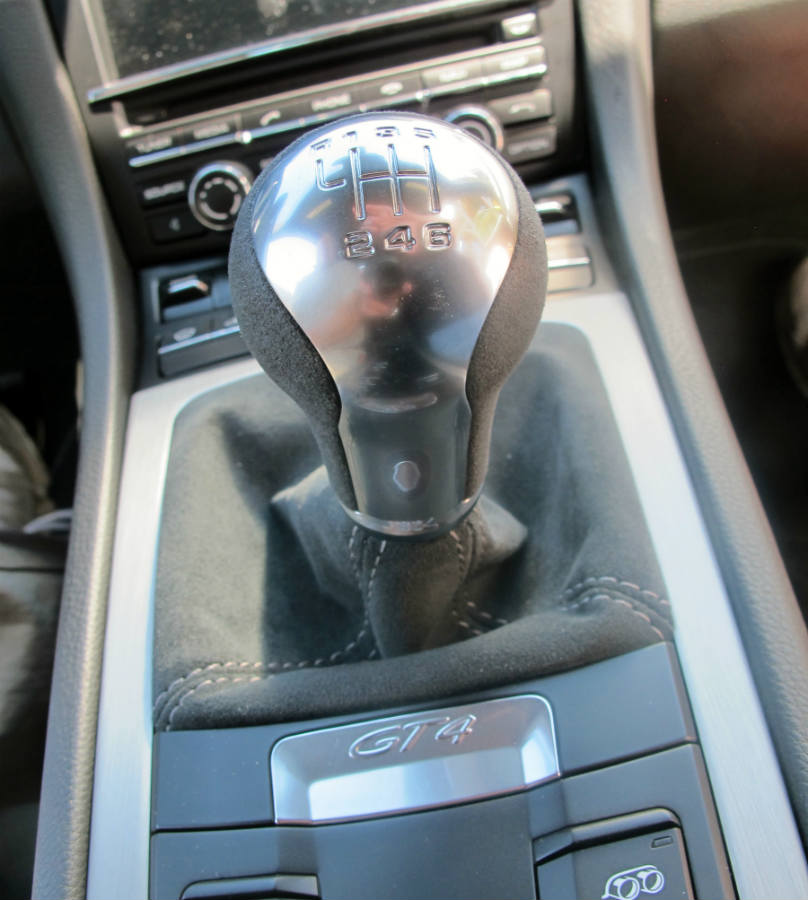 The GT4 is all about as little weight as possible. If it does not add to the performance or driver operation, it is not included.

For example there are no interior door handles, just leather straps you pull. The doors and hood and rear deck are aluminum.

Similarly there is no air suspension or all-wheel-drive like some of the more potent 911s, such as the Turbo S also reviewed on these pages.

If you’re looking for an automatic transmission – forget it. Autoboxes add mass.

The brakes are steel with 380 mm cross-drilled rotors at both ends with bright red monobloc calipers, six pistons front and four pistons rear. 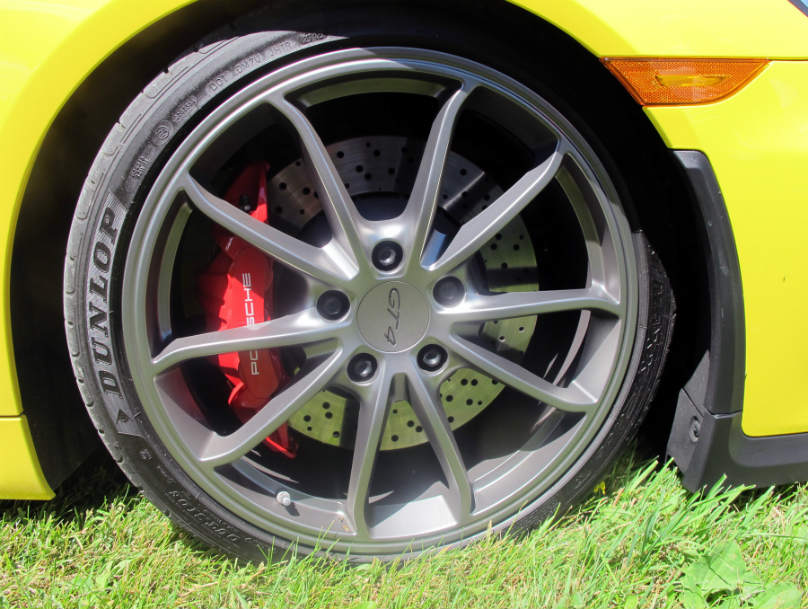 The cockpit is quite simple with large central analog gauge for the revs and a digital window at the bottom for speed.

To the left and right are smaller gauges for read outs and fuel, tire pressures, etc.

The new leather wrapped GT4 steering wheel is devoid of buttons or toggles – they increase weight. There is a stalk on the lower right for cruise control, but that’s about it.

The seats are deep with high bolsters, but for an extra $5,400 you get the optional full bucket seats made of carbon fibre with a thin veneer of leather and side bolsters as high was the top of your thigh.

There is no power adjust, just a pull handle to slide the seats on simple runners. Again, it’s about the weight.

These are not simple seats to get into, especially for the full figured such as myself.

But once in, you are truly in and you feel part of the machine, not just an operator.

The ignition key is on the left following Porsche design tradition that goes all the way back to the 1950s when drivers at LeMans ran and jumped into their cars to start the race.

With the key on the left, the driver could start the car with his right hand on the shifter and roar off just the half second before his competitors. 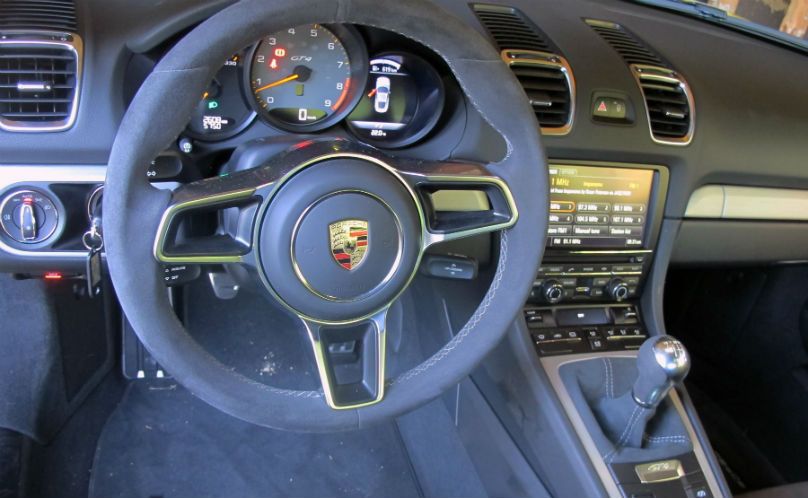 With my wife also shoehorned into the GT4, we set off for the weekend to see my lifelong best friend.

Packing in the GT4 is strategic in that there is a 150-litre bin at the front and 184 litres behind the seats on a shelf over the engine, complete for tiedowns, so the luggage/bags don’t shift.

With an unladen weight of 1,340 kg and 385 hp, the GT4 with its mid-engine layout begs to be driven with verve.

Being a holiday weekend, I did just the opposite on the main highway, knowing the brilliant yellow paint and huge, raised rear spoiler were an OPP magnet – so why go looking for trouble? 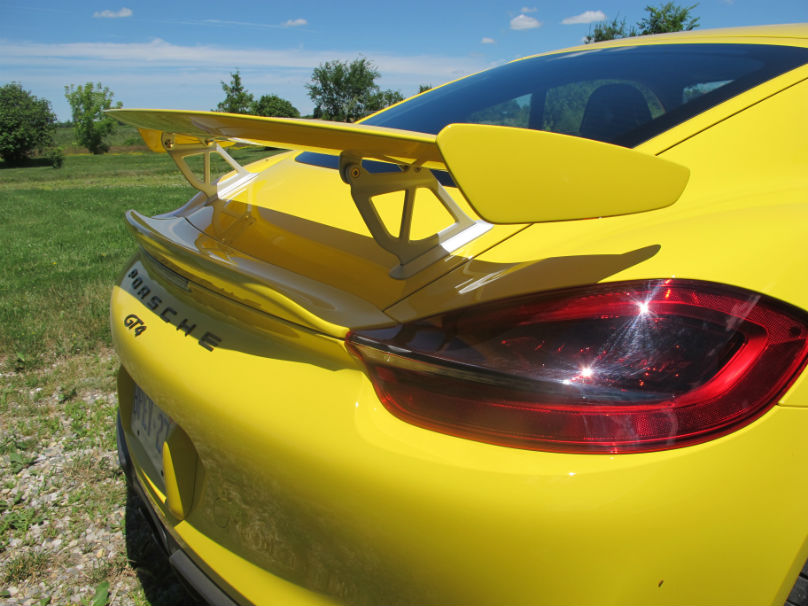 But it did attract attention. Both times I stopped for gas people came over to take an admiring look and ask questions.

Finally on a very long and laser straight stretch of road I know somewhere south and west of London, I let the GT4 stretch its legs, albeit briefly.

The “feel” coming through the steering wheel, the grip of the tires and that wonderful, sonorous sound of air being gulped in by the two side air ducts is something that can’t be described, but must be experienced. 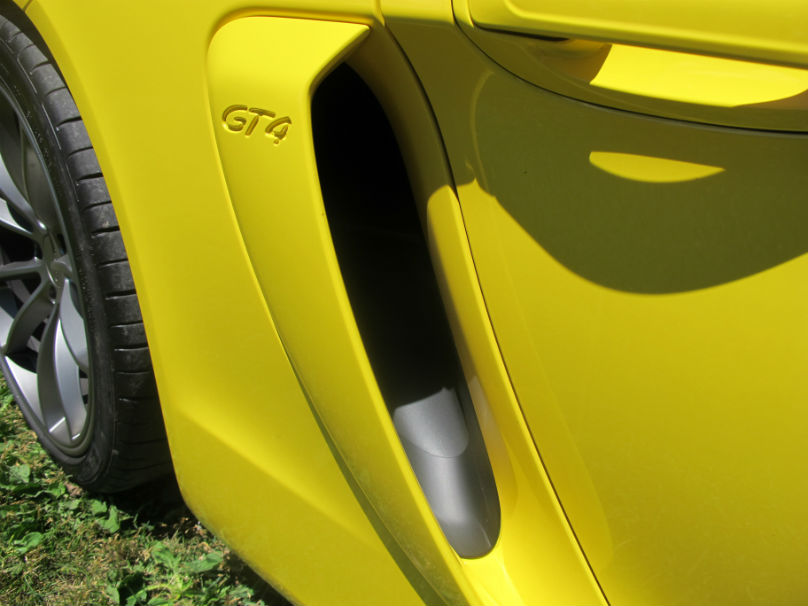 Once you drive something like the 2016 Porsche Cayman GT4 you wonder why anyone would seriously contemplate an autonomous car.

You only get one road through life and I can’t imagine a better way to travel it than in the Cayman GT4. 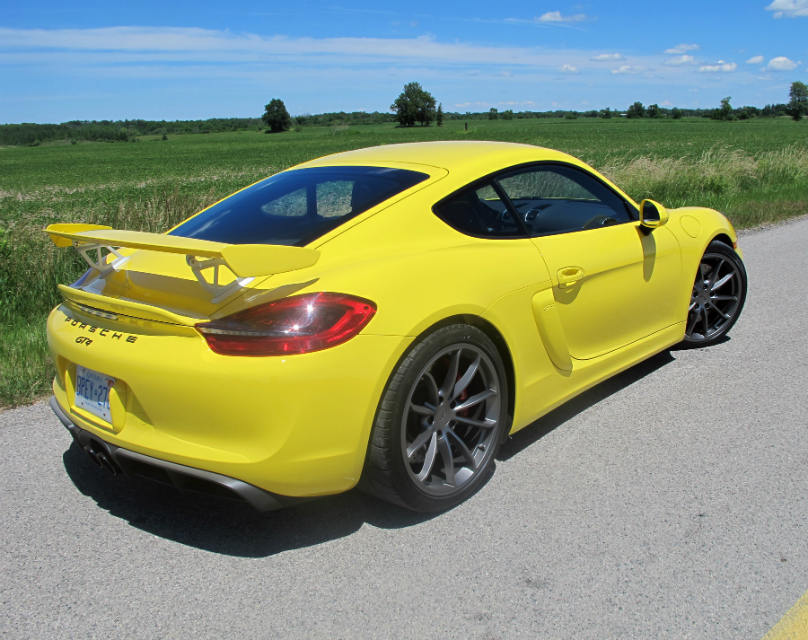