Camry Hybrid shows Change can be a Good Thing

The 2018 Camry Hybrid will have you smiling from ear to ear when you travel in style and think about the money you are saving at the gas pump.

That was the question I had to ask myself following a week behind the wheel of the 2018 Toyota Camry Hybrid LE.

In January 2018, I attended the North America International Auto Show in Detroit where the company introduced the new version of its best selling Camry to a standing-room only crowd.

“It’s the best mid-size sedan we’ve yet produced – one that will deliver everything Canadians have come to expect from Camry, and a whole lot more,” said Cyril Dimitris, vice-president, Toyota Canada Inc.

So to make changes takes guts but as the saying goes, the only constant is change and Toyota realized some of its competitors were catching up to it so a change was needed.

My tester for the week was the Camry Hybrid LE. The Hybrid comes in three models, the LE, SE and XLE.

The XLE comes with a lot more bells and whistles in the area of the entertainment system, seats and comfort but the LE was well equipped and didn’t scrimp where it counted, under the hood.

On the electrical storage side, the LE features a lithium-ion battery (259-volt) while the SE and XLE get a nickel-metal hydride battery (245-volt).

My week in the Camry helped me understand why some drivers like to drive a Hybrid, especially when you add up the gas savings. I usually spend about $50 a week in gas but with the Camry, I filled the tank at a cost of $25 before I returned it to head office in Scarborough.

Even after a week in the Hybrid I still wasn’t use to pushing the start button and hearing nothing. Not a sound. The electric motor is very, very quiet. When the engine does come in it is very seamless and when you push your foot on the accelerator and hear the throaty roar of the exhaust, you know the electric motor is taking a break. With 208 horsepower and 163 lb/ft of torque the Camry is more than capable of keeping up with traffic wherever you are.

The Camry has a continuously variable transmission that makes going through the eight gears as smooth as butter. The LE is the only version that doesn’t have paddle shifters, but I don’t think those are ever necessary on a car. Let the car do the work and if you want to shift gears, buy a standard.

The interior of the Camry is well laid out and comfortable with plenty of room in the back row for three adults. The LE hybrid comes with a seven-inch display screen, while the SE and XLE get an eight-inch screen. While the entertainment system does everything it is supposed to, it is a shame Toyota does not let Apple Car Play or Android Auto connect to the system.

The Camry has an Entune Audio system that features a suite of apps from weather to traffic but I never once used it. I am too comfortable with my iPhone and didn’t want to take the time to use the Entune system. Maybe if I was to buy a Camry I would but my preference would be to connect my iPhone and use the apps I am comfortable with such as Google maps.

As I mentioned before, the LE comes with a long list of standard features including Toyota’s Safety Sense which includes a pre-collision system, pedestrian detection and lane departure alert (which I now automatically turn off because I find it too sensitive on most vehicles.)

Other standard features are: eight-way power seats; tire pressure monitoring system; sport, eco and normal drive mode; a key remind warning (a must have with a push-button start); hill assist control and rack and pinion steering.

“Sexy or really sexy,” was the way Akio Toyoda, president of Toyota, described the Camry when he introduced in Detroit last January.

I don’t think a family sedan can be “really sexy” but the 2018 Camry Hybrid will have you smiling from ear to ear when you travel in style and think about the money you are saving at the gas pump. 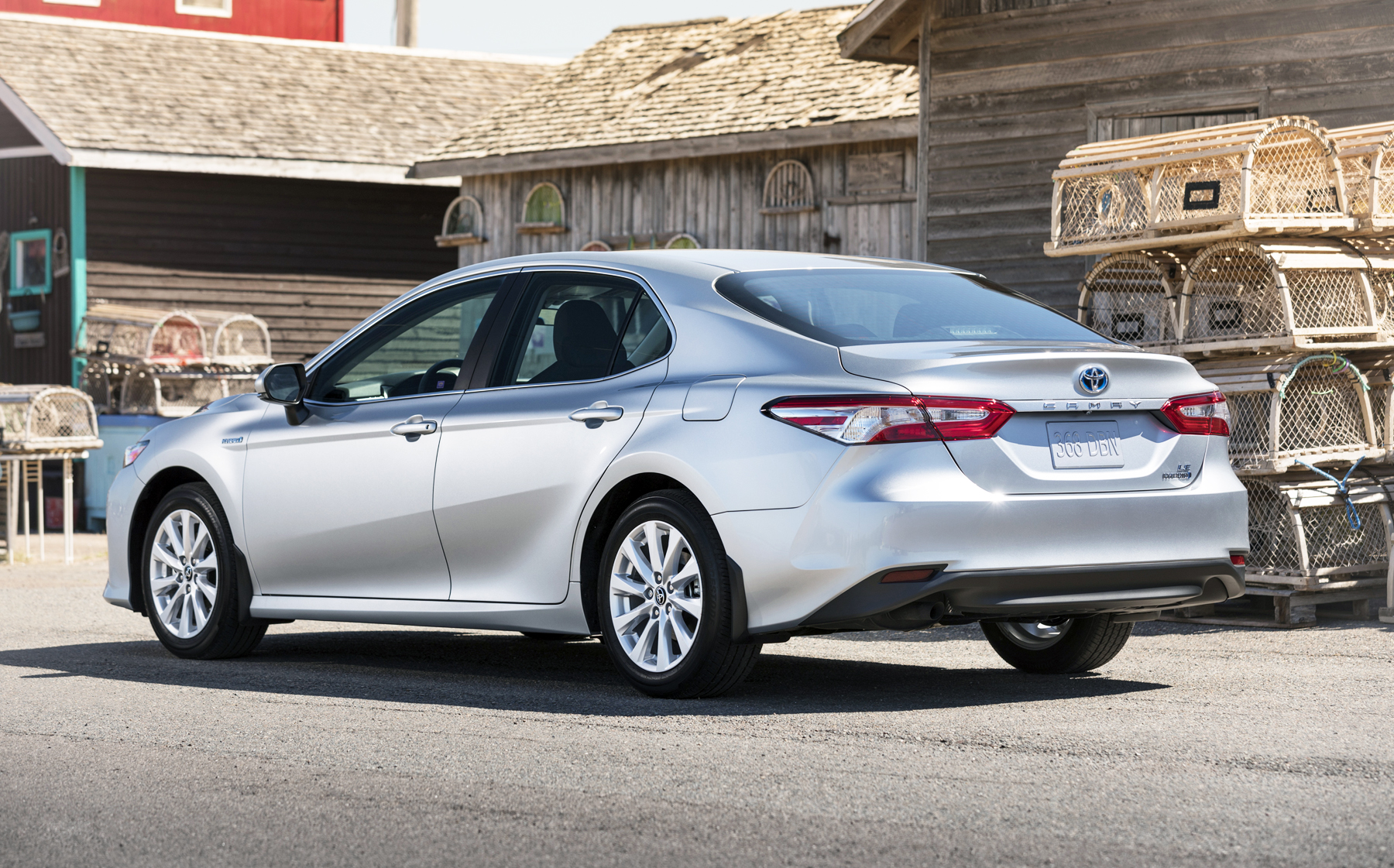