This nimble crossover provides good cargo space and reasonable packaging but is just too small for North American tastes.

North Americans can be excused for knowing just about Nano when it comes to India’s car industry.

The Tata Nano – the world’s cheapest new car at $2,500 in 2008 – was infamous for its miserly features: no power steering, one windshield wiper, a two-cylinder engine and three lug nuts per wheel. The only way to reach the trunk was from the back seat. Engineers later grudgingly devised a hatchback that raised the sticker price.

Despite worldwide media acclaim, buyers discovered the 37-horsepower car wasn’t much better than the scooters many Indian families rely on to get around. Used Japanese hatchbacks proved vastly more desirable, and Nano production ended with a whimper in 2018.

Despite the setback, India has a robust automobile industry that began in 1942 with Hindustan Motors and grew to be the sixth largest on the planet. Steep import tariffs encouraged global automakers to build assembly plants in the world’s second-most populous nation. Ford was one of them, opening engine and assembly plants in Chennai almost two decades ago. 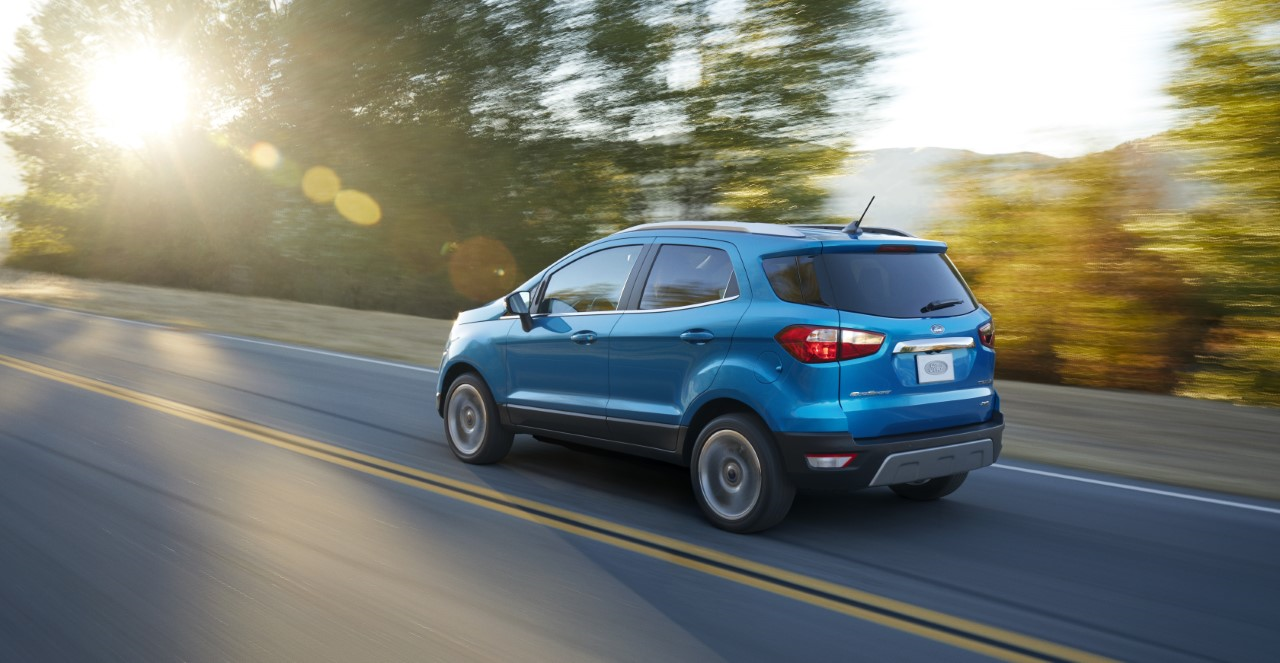 Ford recently announced it is pulling out of India after years of poor sales and operations that hemorrhaged money. Among the products affected is the Ford EcoSport, one of only two India-sourced automobiles Canadians could buy (the Jeep-like Mahindra Roxor is the other).

Let’s kick the tires on the subcompact EcoSport as a used buy.

Unlike the Nano, the EcoSport was not engineered in India, but in Brazil. The first generation EcoSport was released in 2003 and utilized the front-drive platform of the Fiesta hatchback. The second-gen crossover is based on the newer Fiesta (which was sold in North America until recently) with production commencing in Chennai in 2012.

Tiny cars beget tiny crossovers, and the EcoSport is no exception. It’s almost 43 centimetres shorter than a Ford Escape and 18 cm littler than a Mazda CX-3. The MacPherson-strut front suspension and twist-beam rear setup deliver a compliant, if overly soft, ride. 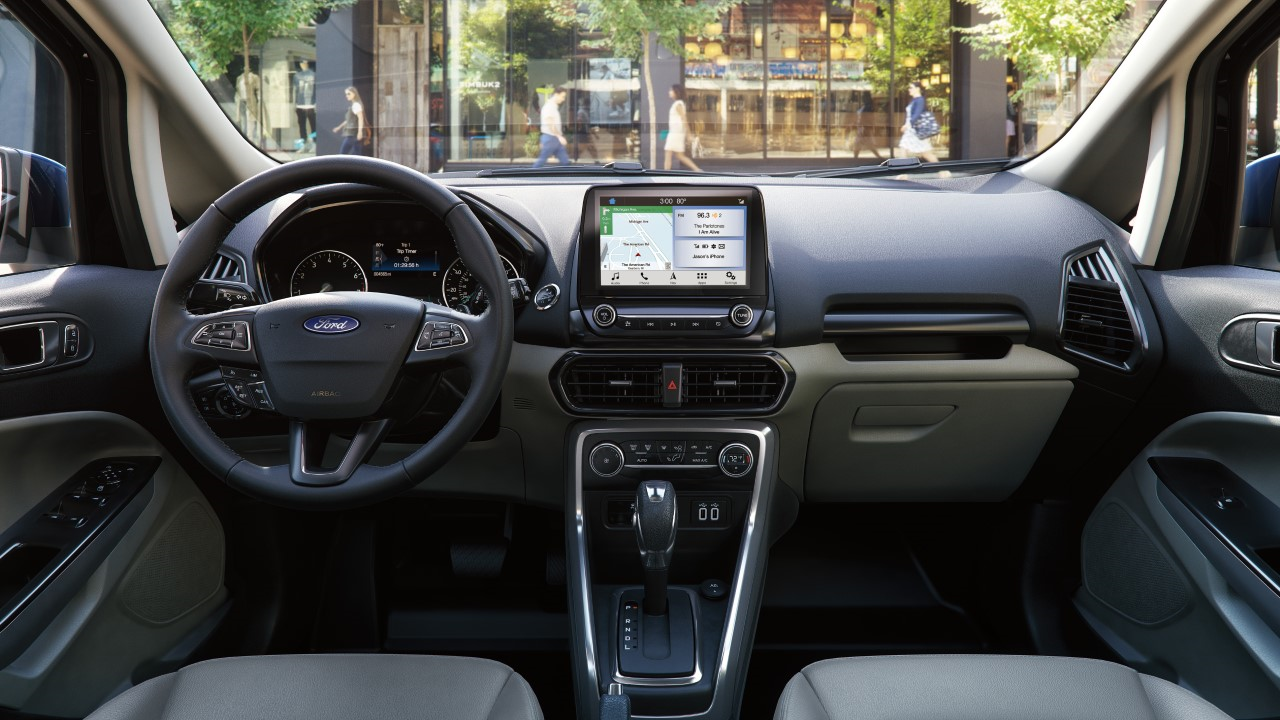 Inside the cabin the driver and passengers sit tall, but the forward view is compromised by the hood, which rises to meet the wide A-pillars, creating blind spots. Unfortunately, there’s a paucity of high-tech safety gear on board – a standard rearview camera and optional blind-spot monitor are the only driver aids you’ll find.

Visibility to the rear isn’t great, but the blind-spot monitoring and rear cross-traffic alert helps. Back seat space is tight, though the split-folding bench is high off the floor, making it habitable for two adults (there are three seatbelts, but the centre position is just cruel).

There’s three levels of infotainment, with the top two supporting Ford’s user-friendly Sync 3 system. The entry-level model has a 4.2-inch display that includes Bluetooth connectivity and two USB ports. Higher trims have larger touchscreens and more features, including an 8-inch display with navigation that comes bundled with a 4G LTE hotspot and a 110-volt outlet. 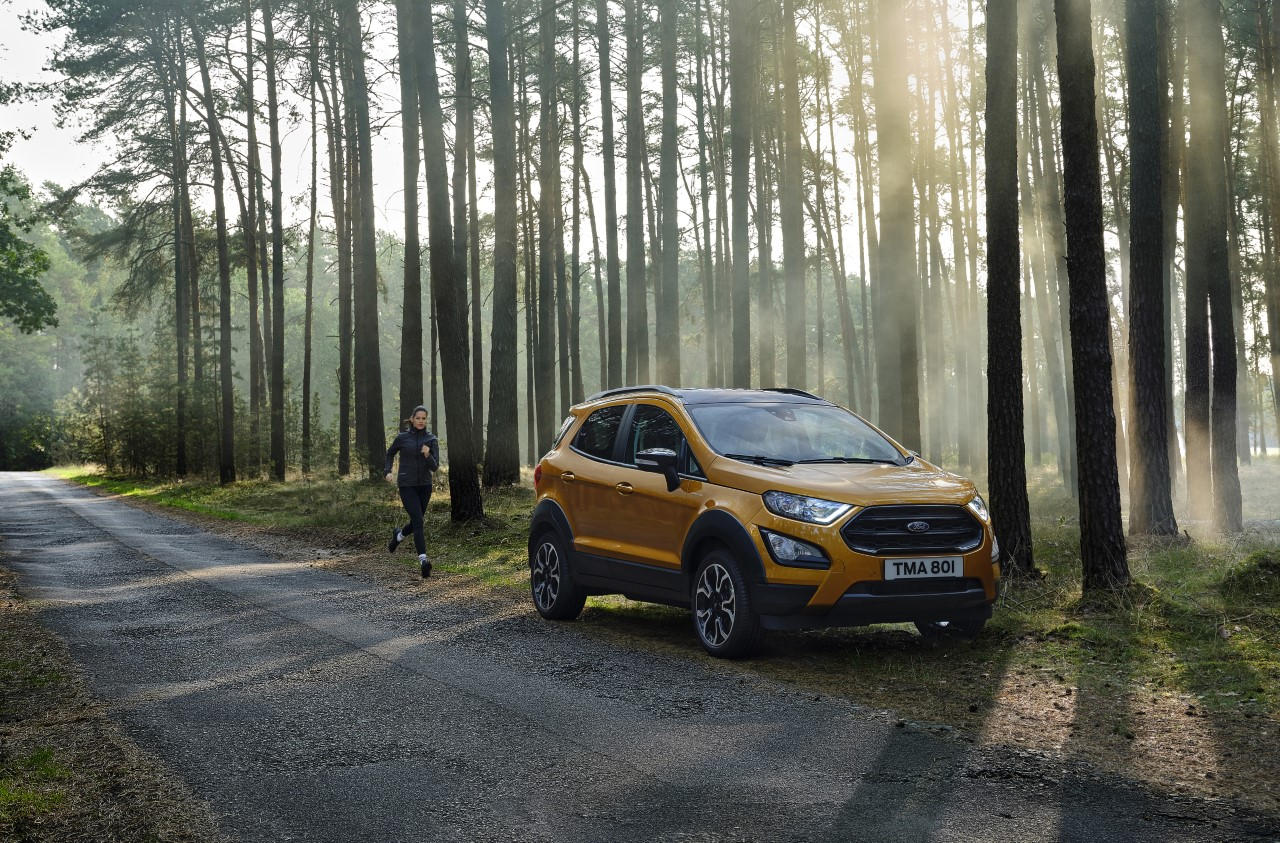 Despite its Lilliputian size, the EcoSport offers decent luggage space and a bunch of interior storage cubbies. Part of the reason it has good cargo capacity is the fact that there’s no spare tire. Other markets get an exterior door-mounted tire, but North Americans get a can of tire sealant.

The non-existent door-mounted spare helps explain why the EcoSport has a hinged rear gate rather than a hatchback you lift up. “If you live in a condensed city where parallel parking is inevitable, the trunk door might be an issue as it opens sideways,” points out an owner in a post.

The EcoSport is propelled by two distinct engines. Standard is an iron-block 1.0-litre three-cylinder turbocharged engine sourced from Ford of Germany that makes 123 horsepower and 125 lb-ft of torque. The wee engine only powers the front wheels, working through a conventional six-speed automatic transmission. Interestingly, the three-banger’s inherent vibrations are countered by an unbalanced flywheel, which generates less friction than balance shafts.

The upgrade is an all-aluminum 2.0-litre four-cylinder engine, sans turbo, that churns out 166 hp and 149 lb-ft of torque. It works through the same autobox, but this engine can be had with optional all-wheel drive. Surprisingly, the four cylinder can tow up to 907 kg (2,000 lb), and even the three-cylinder version can pull up to 635 kg (1,400 lb). In crash testing the EcoSport earned a four-star rating from the National Highway Traffic Safety Administration.

The second-generation EcoSport has been around for most of a decade and Ford has done a reasonable job of keeping it up to date. Knowing that it appeals to younger buyers, its infotainment features are revised regularly – the 4G LTE Wi-Fi hotspot and 8-inch touchscreen became standard in 2019 – and the crossover got a light cosmetic refresh for 2021.

Too bad the drive hasn’t improved one iota since its launch in 2013. Regardless of the powertrain, the EcoSport is the polar opposite of sporty. Acceleration is sleepy at best: the three-cylinder requires 10.4 seconds to attain 97 km/h and the four-banger will do it in 9.8 seconds – performances that remain squarely in econobox territory. 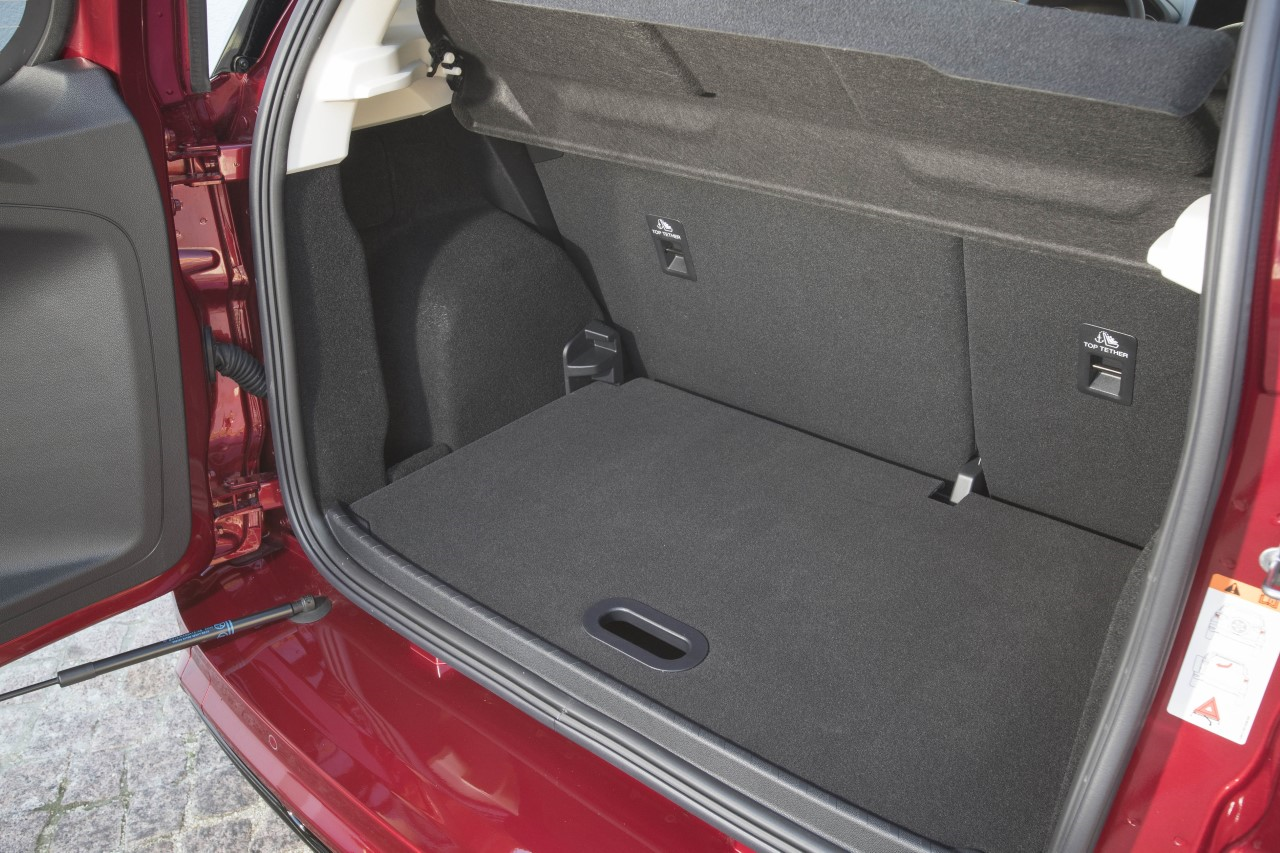 The stubby wheelbase makes for fairly sharp handling, but the ride quality is choppy, jostling passengers on all but the smoothest roads. Steering feel is poor, as if the steering wheel is connected to the front tires by an elastic band. Body roll isn’t as bad as its top-heavy look would suggest, but the economy-tuned tires reach their limit pretty early so drivers have to be mindful.

Perhaps the biggest disappointment is the fact that the pint-sized EcoSport’s three-cylinder engine is uncharacteristically thirsty. The four-cylinder actually saves more gas. Blame the crossover’s porky curb weight, an astounding 3,360 pounds in the all-wheel-drive configuration. Car and Driver points out that Ford’s F-150 truck equipped with a 3.0-litre turbodiesel V6 gets better highway mileage than the microscopic EcoSport. Count on mileage averaging in the high 20s combined, or around 10 litres per 100 km. It’s nothing to brag about.

The most disconcerting feedback provided by owners is issues with the engine oil pump in the 1.0-L three-cylinder turbo engine. It’s a component many car owners take for granted, yet in the EcoSport it can be a sore point.

“While driving 90 km/h, the engine oil pressure light illuminated with a knocking sound coming from the engine. The vehicle was towed to the local dealer who diagnosed that the engine had failed due to a lack of oil pressure,” recounted an owner of a 2018 model. A significant number of 2018 EcoSports have exhibited oil starvation.

A few owners have noted issues with the six-speed automatic transmission, including poor shifting and jerky action, although at least one driver expressed relief that Ford resisted the temptation to put in its notoriously unreliable dual-clutch automatic tranny that soured the relationship for so many Focus and Fiesta owners.

Other reported weaknesses include grinding brakes, occasional hiccups with the infotainment and navigation displays, and some random electrical faults. There’s widespread condemnation of the engine start-stop system that’s designed to save gas at red lights, though Ford mercifully provided a switch to defeat the feature.

Taken together, the EcoSport represents a weak effort by an automaker that’s staked a major claim in the SUV segment. Ford’s subcompact crossover is just too small for most North Americans and, ironically, it can’t deliver on its economy pledge because its engines are too weak and thirsty. There are vastly better mini crossover utes for the money, including the aforementioned Mazda CX-3 and the Honda HR-V.