The Ridgeline is a distinguished member of the small – but growing – midsize truck segment.

Like broccoli and exercise, you probably don’t want a Honda Ridgeline, but it’s likely you may need it.

Not content to copy the Detroit Three by building another body-on-frame pickup truck, Honda set out to design a vehicle for people who need a family cruiser for commuting and school-shuttle duties, plus cargo capacity for weekend runs to Home Depot and the cottage. So, like, for most of us.

Honda’s pickup took the form of a midsize, five-passenger, four-door crew cab with a five-foot cargo bed out back – its sole configuration. Borrowing the Pilot’s SUV unibody platform, engineers reworked it with 93 per cent of the parts being new to ensure the Ridgeline had some genuine truck capabilities, including towing a 5,000-lb trailer.

Its debut in 2005 got a mixed reaction: truck magazines called it an oddity and not a “real” truck – the base model spun its front tires, not the rears – while others branded it the Swiss Army knife of trucks, bringing innovation to a very conservative truck market. 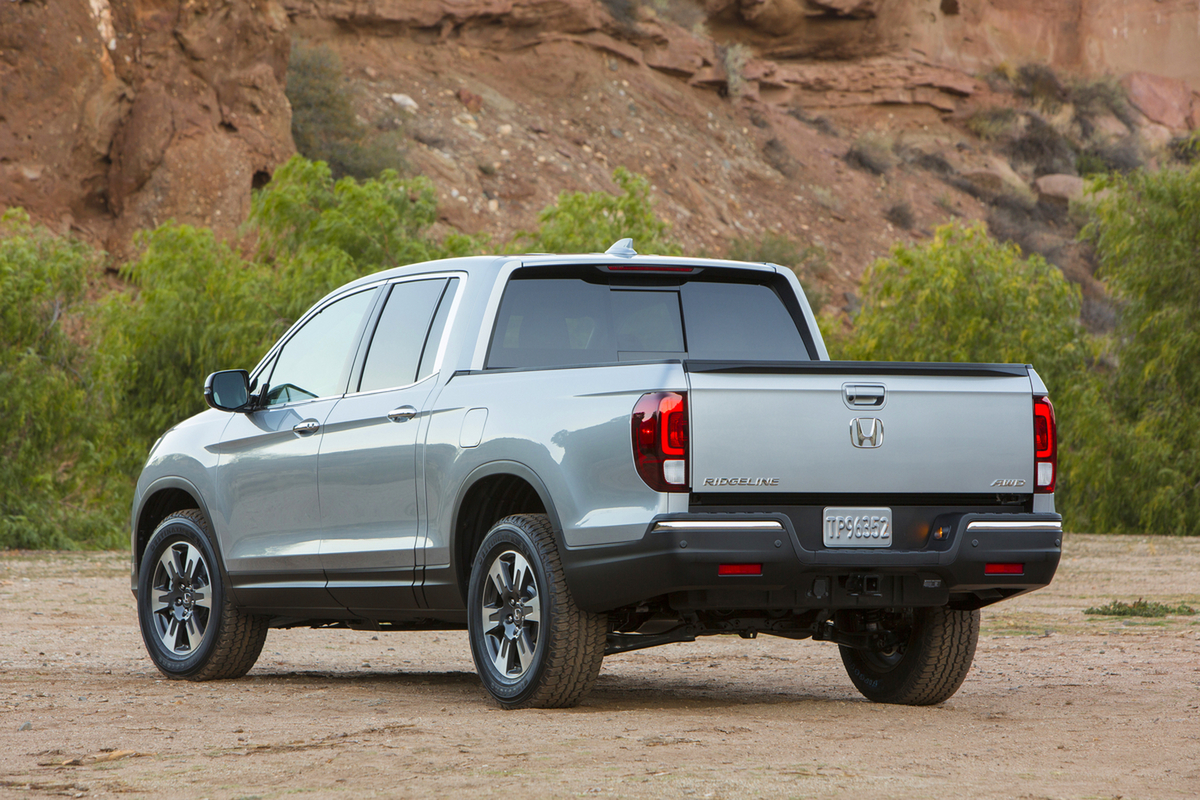 After nine years of modest sales, engineers returned to the drawing board to envision the second generation of its un-truck. It uses Honda’s new global light truck platform, which underpins the latest Pilot (and, uh, the Odyssey minivan), but with a longer wheelbase and more robust components to endure serious hauling and towing duties.

Just as importantly, it looks more like a regular truck. The rear bed is bigger and stylists added a fake seam that visually separates the bed from the rest of the Ridgeline while keeping the unibody intact. Also intact is the unique tailgate that folds down or swings 80 degrees to the left to allow access to a storage well under the bed’s composite floor.

Occupants are treated to a handsome, spacious cabin reminiscent of the Pilot, with the same dashboard layout and deluxe amenities like a 5-inch display (an 8-inch touchscreen is available) with Bluetooth connectivity and a seven-speaker stereo, while a tri-zone automatic climate control is standard on higher trims.

Step-in is at an ideal height, the front bucket seats are generous and sightlines are excellent all around. Rear bench seating is set at a comfortable angle, although legroom is pinched a little. As before, the bench flips up to yield a broad, flat floor for carrying bigger items, like bicycles. But there’s a hiccup.

“The second-row doors do not open fully. So strange that they market being able to put a bike, snowboard, etc. on the floor, yet you can’t even fit it through the door!” one Ridgeline owner griped online. There is a clever hack, though: owners have been buying the front-door stops, which are longer, and installing them on the rear doors. Problem solved. 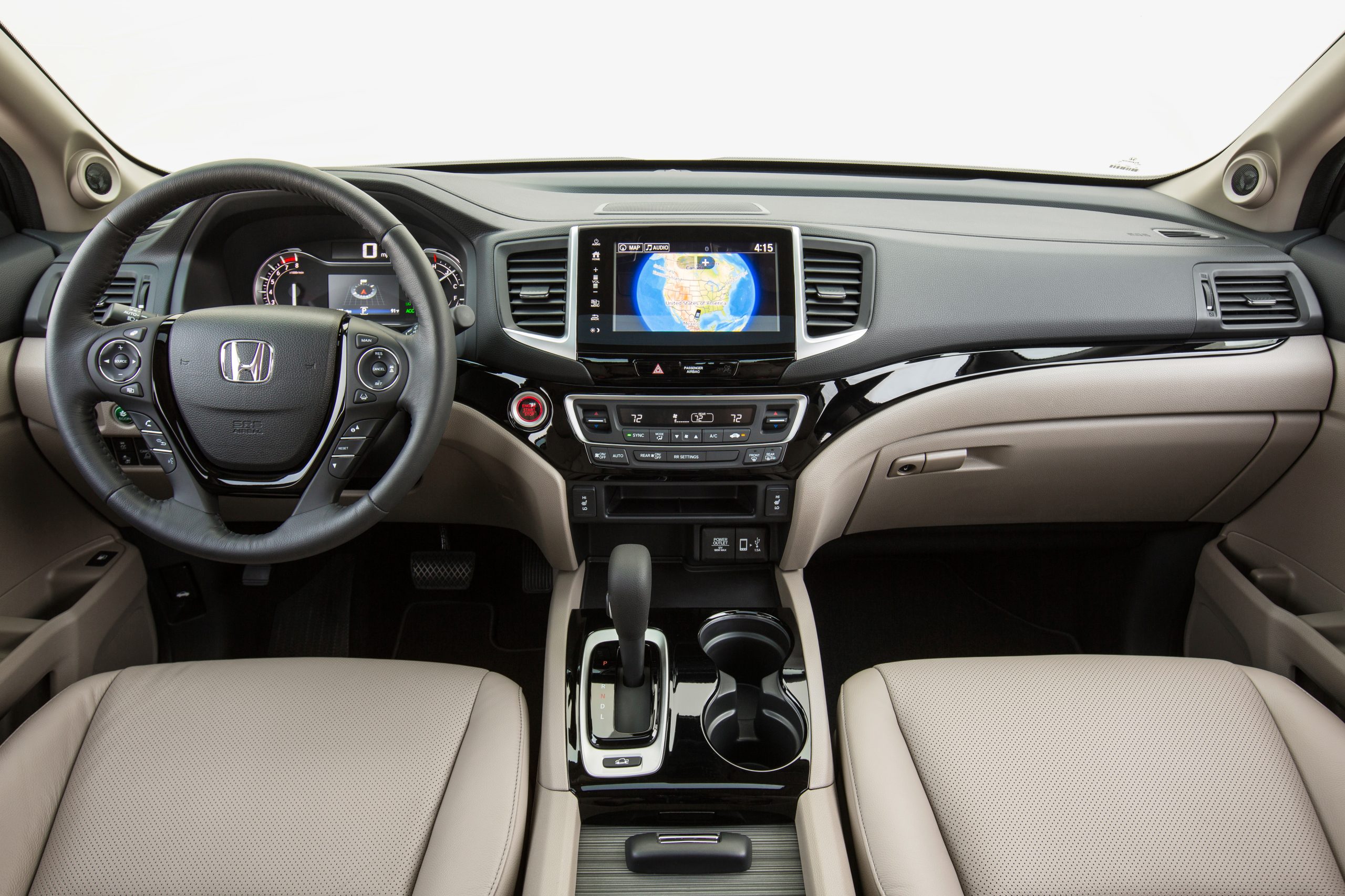 The Ridgeline is a solid cargo hauler in any case. The 5.3-foot bed is longer than that of other compact trucks, it’s the only one that carries four-foot-wide drywall sheets flat, and it has the highest payload rating at 1,584 lbs. While the 5,000-lb towing capacity isn’t segment-busting, Honda points out it’s more than sufficient for nine out of 10 truck owners.

Unlike Detroit’s truck makers, Honda outfits the Ridgeline with just one powertrain: a 3.5-litre V6, mounted sideways, that makes 280 horsepower and 262 lb-ft of torque working through a conventional six-speed automatic transmission. The truck’s standard torque-vectoring all-wheel-drive system enhances stability on all surfaces – but don’t confuse it with a true 4×4 system with low-range gearing. Crash testing by the U.S.-based National Highway Traffic Safety Administration (NHTSA) provided an overall safety rating of five stars out of five. 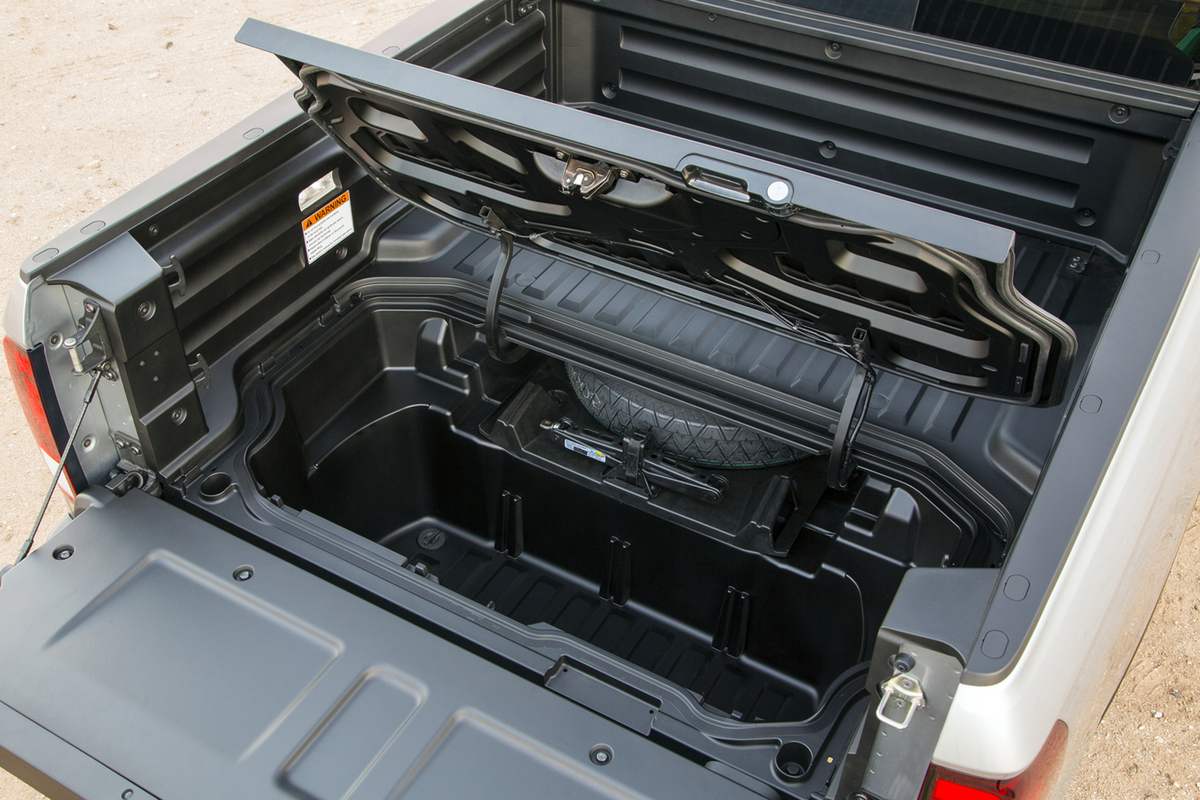 Honda saw no reason to update its only pickup offering until the 2020 model year, when it replaced the aging six-speed automatic with a contemporary nine-speed unit supplied by Germany’s ZF. Honda Sensing safety tech and Apple CarPlay and Android Auto also became standard fare. Oh, and the rear doors open wider. At last. 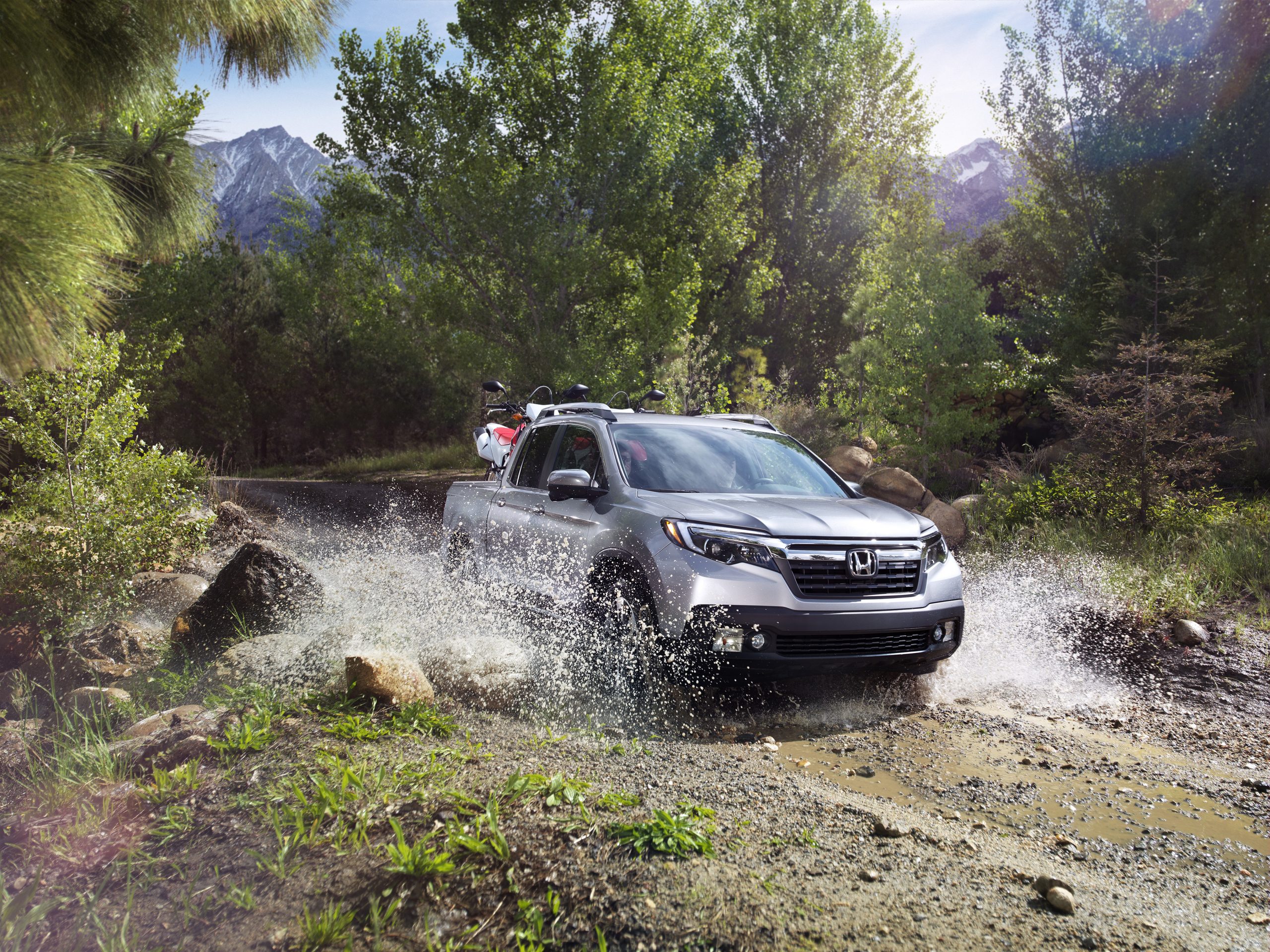 By design, Honda’s truck delivers a ride that no live-axle, body-on-frame vehicle can replicate. It’s much smoother and composed on the road than the competition because it was the only pickup in its segment with a four-wheel independent suspension in 2017. Car-like body control and smoothness are baked right into its (minivan) platform; it shrugs off bumps easily and the ride is never harsh.

“Drives like a luxury car, but can do everything I need a truck to do – tow my boat, haul mulch and other stuff (for) the yard and house projects,” an owner posted online. One likened the Ridgeline to a modern-day Chevy El Camino, the product of a truck bed on a car chassis.

With 280 horses under the hood, the Ridgeline is reasonably swift for a midsize truck. Zero-97 km/h comes up in 6.7 seconds, which is one of the quicker times in the segment. In typical Honda fashion, the engine spins smoothly and throttle response is alert. There’s admirably low levels of wind and tire noise thanks to triple-sealed doors. If there’s a weakness, some auto journos have mentioned the brakes are a little subpar, given the hauling duties the truck may be required to perform.

There’s little consensus among owners regarding fuel economy. Some note disappointing results in city traffic, dipping below 20 m.p.g. (14 L/100 km) in some instances, while others report considerably higher numbers in both the city and especially on the highway (34 m.p.g. or 8.3 L/100 km) when using Honda’s “Econ” button to tweak the throttle response and transmission shift points to boost fuel efficiency.

Whether they bought a Ridgeline as their very first pickup, or bought it as the latest in a long line of trucks, owners lauded their vehicles for the comfy and spacious cabin, the car-like road manners, and for its ingenious features, like the two-way tailgate and watertight trunk under the bed floor. Deficits include the lightweight AWD system that’s not really designed for off-roading, the smallish load bed and the absence of different configurations.

In terms of reliability, the Ridgeline brings the usual Honda goodness – although there are a few complaints used-vehicle shoppers need to be aware of.

Some buyers of early 2017 models note the V6 engine would light up the warning lamps on the dashboard, along with driveability issues due to misfiring. The problem is often traced back to faulty fuel injectors – not an inexpensive fix if the vehicle is beyond the warranty period. Owners also advise the V6 uses a replaceable timing belt rather than a permanent chain.

The trick tailgate presents a mechanical issue of its own: the hinges allow the wiring loom for the back-up camera to be pinched and even severed, making the camera inoperable. Owners are again on the hook for the repair cost outside the warranty.

The capless fuel filler can be a problem when water gets trapped between the plastic pieces and freezes, preventing the flap from opening and allowing refueling to take place. More than a few owners have broken the capless pieces, requiring another trip to the dealer.

Other gripes, in small numbers, include some burnt-out transmissions that may be due to excessive towing loads, a few faulty air conditioners, disappointment with the temporary spare tire (truck drivers are accustomed to a full-size spare), and annoyance with the HondaLink infotainment system interface, which can be less than responsive in some instances.

Overall, the Ridgeline is a distinguished member of the small – but growing – midsize truck segment. With its class-leading ride comfort and excellent handling, garage-friendly size and all-weather AWD, it ticks all the boxes for most consumers. Stridently different, it represents an answer to a question nobody remembers asking. But we’re glad Honda obliged anyway.