The Pacifica utilizes Fiat’s “compact wide” platform that also underpins the Jeep Cherokee, complete with an independent rear suspension – a first for a Chrysler minivan – that allows for a low cargo load floor and improved handling and ride quality.

The first time I got behind the wheel of a Chrysler Pacifica I was 40 pounds lighter and my shaggy haircut kept obscuring my eyes. Let’s just say it was a while ago.

Released in 2003, the original Pacifica was a “sports tourer” wagon with hinged doors all around, so as not to be confused with a minivan. Funny enough, it was built alongside the Grand Caravan at Chrysler’s Windsor plant and utilized a modified version of the same platform, with a wider track and lower roofline.

It concealed its minivan underpants in the guise of a family adventure vehicle.

But like all crossovers, the Pacifica couldn’t deliver all the kid-hauling utility of a front-drive minivan. It was hard to load everything our brood of five needed for an east coast vacation. We ended up strapping a giant cargo bag to the roof, since the storage space behind the third-row seats couldn’t even hold a box of Pampers.

Fast forward to 2017 and the Pacifica name returned to grace Chrysler’s next-generation minivan that replaced the high-zoot Town & Country. Sleek and contemporary, the gushing automotive press anointed it with plenty of awards. Our family drove one to Florida and back a few years ago and came away suitably impressed.

But how does it hold up as a second-hand buy?

The Pacifica utilizes Fiat’s “compact wide” platform that also underpins the Jeep Cherokee, complete with an independent rear suspension – a first for a Chrysler minivan – that allows for a low cargo load floor and improved handling and ride quality. Aluminum suspension pieces, sliding doors and liftgate, together with ultra-high-strength steel, help to trim the curb weight by 115 kg compared to the old Town & Country.

The Pacifica brought a boatload of innovative features to the minivan segment, including a triple-pane panoramic sunroof, parallel and perpendicular parking assist, 360-degree surround-view camera, rotary gear selector, capless fuel filler and hands-free power sliding doors – most of which reside on the lengthy options list. 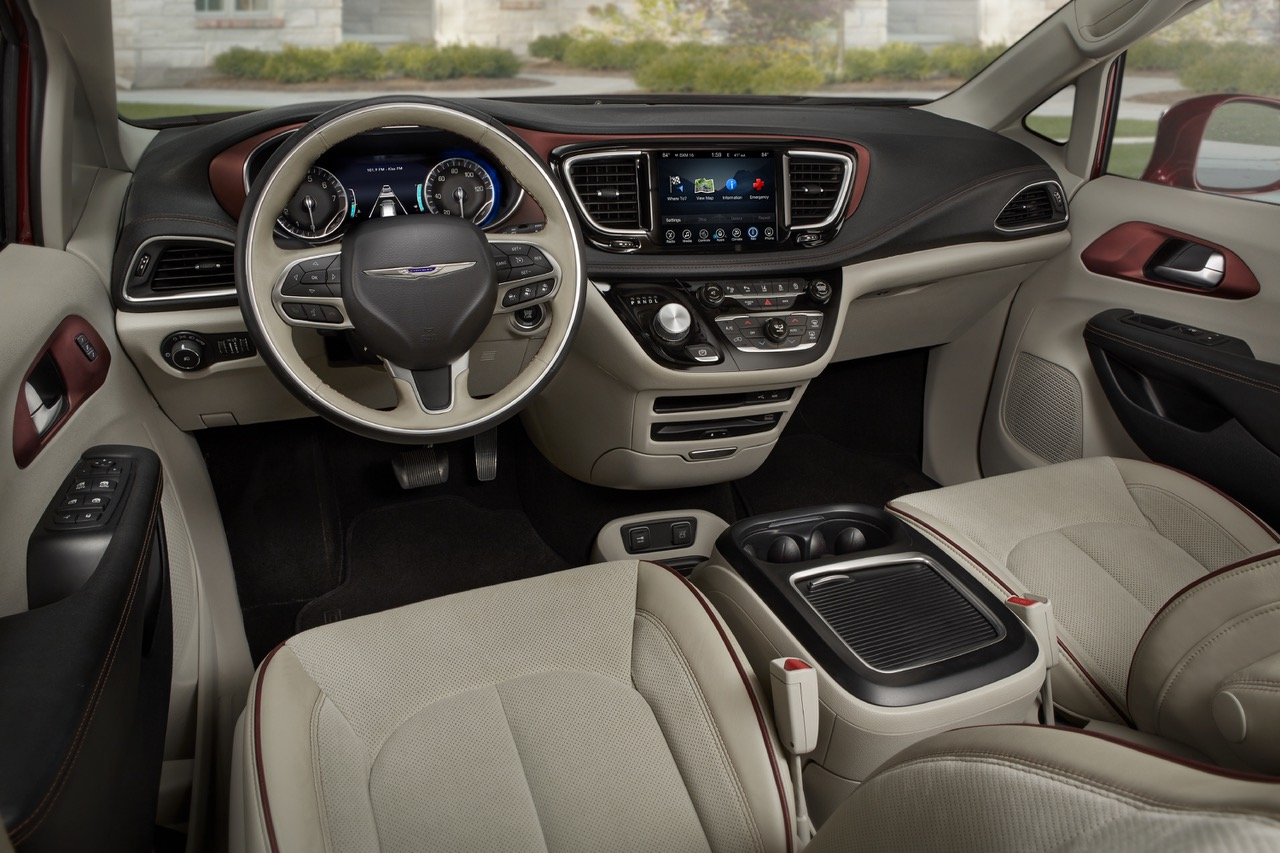 What every Pacifica does provide is a big, roomy interior for up to eight people (some of them hopefully little) perched on Chrysler’s clever Stow ’n Go seating, which collapse into the floor in the second and third rows. One buyer noted that the Pacifica converts from a school bus to a pickup truck ready to schlep 4×8 plywood sheets in minutes.

“Front to back there is room for everyone and everything. We especially like the versatility of the interior and ease of making changes to it. Once all the seats are stowed there is enough cargo room for anything we’ve wanted to load,” an owner of a 2018 model posted online.

Instead of a floor console, there’s an open binnacle between the front seats, creating more available storage for personal effects, along with numerous cubbies, slots and bins. Interior material quality is high and the controls feel substantial. The contoured dashboard juts out in the middle within easy reach of the driver and front passenger, topped off by a rotary gear selector that feels especially upscale.

Chrysler’s 8.4-inch Uconnect infotainment touchscreen gets top billing here with its crisp and clear graphics and intuitive interface. The new Uconnect Theatre rear entertainment system features Blu-ray disc playback on touchscreens mounted in the back of the front seats, as well as inputs from various handheld devices.

Powering the Pacifica is Chrysler’s omnipresent Pentastar 3.6-litre DOHC V6 that develops 287 horsepower and 262 lb-ft of torque dispatched to the front wheels through a ZF nine-speed automatic transmission that’s seen duty in a number of products. Automatic engine stop-start functionality (which saves fuel while waiting at red lights) was added halfway through the 2017 model year.

Speaking of saving gas, the Pacifica was joined by a dedicated Hybrid model – the first plug-in hybrid drivetrain in a minivan. A modified Pentastar V6 running the high-efficiency Atkinson combustion cycle works with two AC electric motors for a combined 260 hp. A 16-kWh lithium-ion battery pack lives in the floor well where the second-row Stow ’n Go seats would have been stored. They’re replaced by captain’s chairs that are more comfortable than the thinly padded Stow ’n Go seats. The Hybrid can travel up to 53 km on electric power alone.

For 2018 Chrysler introduced a de-contented LX base model to help bring down the Pacifica’s entry price. All models got some minor revisions, including standard Apple CarPlay and Android Auto. The Pacifica AWD Launch Edition for 2020 got an all-wheel-drive system – something we Canucks asked for – with a brake-lock differential that helps route all available torque to whichever tires have the most traction.

The Pacifica drives smaller than it looks. Its Fiat-derived breeding is evident in the crisp damping action of the suspension, decent turn-in and good body control. Even on optional 20-inch alloys rims the van rides smoothly and rarely harshly. Wind and tire noise are sublimely controlled – Honda could learn a thing or two here about mitigating highway noise. 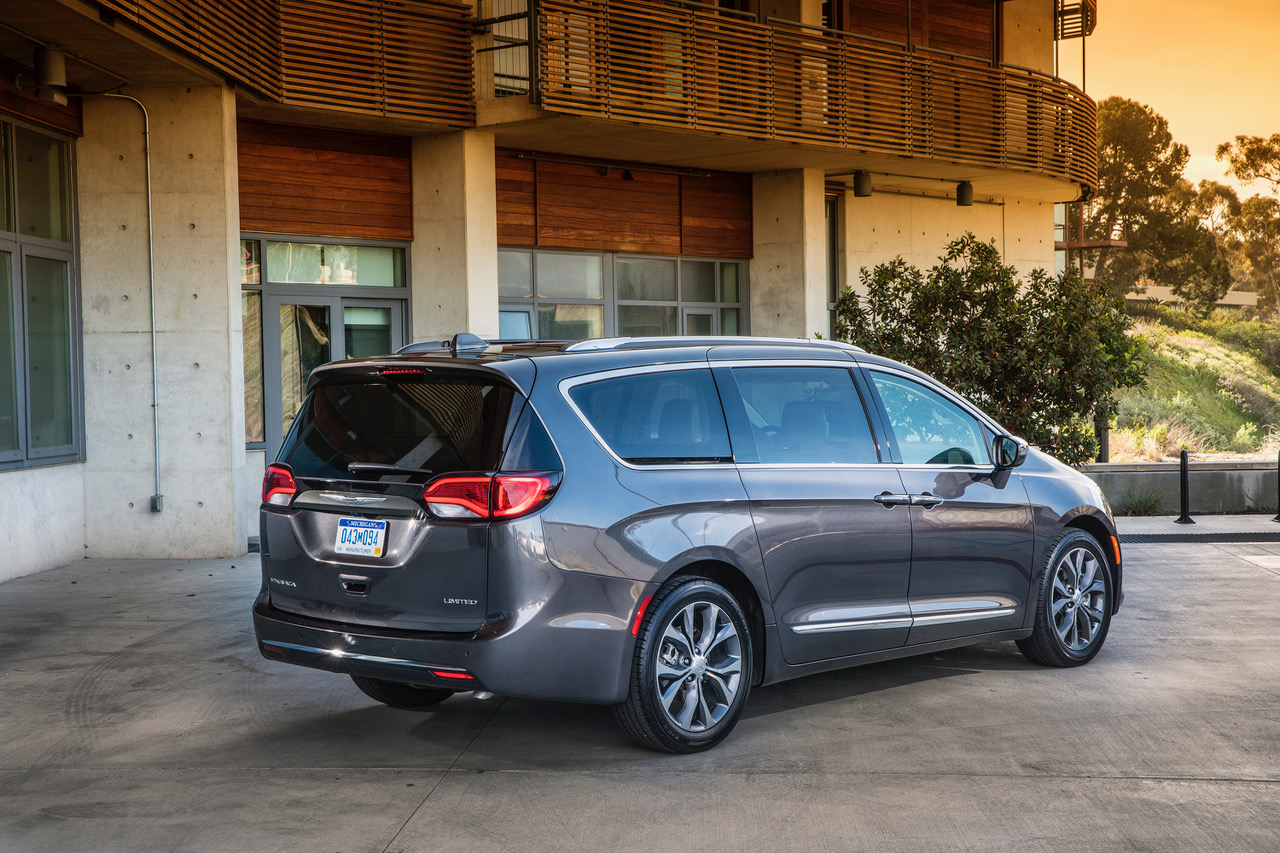 The Pentastar six-cylinder is a pretty muscular engine. While it makes upwards of 300 horses in some other models, it still motivates the Pacifica with reasonable haste. Zero to 97 km/h comes up in 7.3 seconds, which puts it near the head of the minivan class. The Hybrid is no slouch either, managing to hit highway velocity in 7.8 seconds.

Fuel economy is less than stellar in the regular Pacifica. Rated at 12.4 litres/100 km in city driving, owners have reported getting considerably less mileage. Minivans typically burn 14 litres or more per 100 kilometres in stop-and-go driving, underscoring the reality minivans are neither mini nor frugal these days.

On the other hand, the Pacifica Hybrid delivers real savings where vans do most of their work: short urban trips ferrying kids to class and running errands. By way of example, we scored 7.9 L/100 km while driving the Hybrid around Florida’s Amelia Island.

Pacifica owners often have to defend their choice of driving a minivan over a more popular SUV, but their reasons are above reproach: a comfortable highway cruiser, advanced safety features, fantastic flexibility in terms of carrying people and cargo, great visibility all around, and an upscale look that elevates the Pacifica above competitors.

Unfortunately, a big negative factor prevents the Pacifica from being a recommended used buy: owner complaints about poor dependability are common and reoccurring, which can make ownership trying. By way of evidence, the Pacifica made the list of Consumer Reports’ 10 least reliable vehicles in 2020, based on its annual survey of 400,000 subscribers.

First and foremost, the Pacifica is hamstrung by its ZF automatic transmission, a slushbox that’s been a sore point with a number of manufacturers that have used it, including Acura and Land Rover. Reported issues include sudden lunges from unexpected downshifts, no kickdown when merging on a highway, front-axle vibration in low gears and complete mechanical failure.

“Transmission is horrible; been to the dealership three times and they say that it checks out. Even admitted that they sometimes will shift hard or weird. My ‘90 Mustang with a shift kit and gears didn’t shift this hard,” one owner remarked online. Some drivers described the hard shifts as akin to being hit from behind in a low-speed collision. Complicating the transmission woes is the rotary gear selector, which reportedly can refuse to shift into Park.

Another disconcerting problem is the van’s tendency to spontaneously stall in traffic. Drivers report the dashboard lighting up like a Christmas tree with numerous warning lamps. The stalling issue is reminiscent of the TIPM issue that plagued some Dodge and Jeep models in the past. Needless to say, drivers don’t like the helpless feeling when their car stalls on a busy highway.

There’s a myriad of other headaches, too: blank infotainment screens, intermittent electric power steering, rusted hoods, sliding doors that open on their own, creaking panoramic sunroofs, and a fire risk in Hybrid models. Transport Canada issued a recall because the 12-volt battery isolator post used in the Hybrid electrical system could overheat and cause the minivan to catch fire. According to a Quebec class-action suit, a fire may occur even when the vehicle is turned off and unattended.

Despite the accolades foisted on the Pacifica by the automotive press – even Car and Driver called it the best minivan on the market – used-vehicle shoppers should know cars can have a very different reputation after three or four years on the road. Give the Chrysler Pacifica a wide berth.