In terms of reliability, the second-generation Cruze has performed better than average.

Why do small cars intimidate and confound Detroit’s automakers?

Take the Chevrolet Vega (please), which was sold from 1971 to 1977. As General Motors’ answer to the rising tide of imported cars, the Vega was attractively styled, comfortable and benefited from a bunch of innovative technologies.

Yet as the late John DeLorean noted in his book, On a Clear Day You Can See General Motors, it was the product of a company that appeared to disown it from day one. The Vega had been rushed into production after just two years of development, essentially delivering it half-baked.

Its 2.3-L four-cylinder engine used an aluminum block – but without cylinder liners for durability – topped with an iron cylinder head. When the engine overheated, which was common, the cylinders distorted and the piston rings wore off the protective silicon lining. The result was oil consumption and often a failed head gasket, which allowed coolant to kill the engine.

Other problems included rampant rust issues, defective axles and balky throttles. GM engineers instituted big improvements in the 1976 Vega, but its reputation as a lemon was already sealed and the car was soon axed.

The Vega seemed to set the pattern for Detroit. Building a decent small car became an enduring challenge, one that recently saw Ford euthanize its Focus and Fiesta with their clunky dual-clutch transmissions, and Fiat Chrysler abandon its troublesome Dart.

Meanwhile GM had tapped its resources in Europe and Asia to help it design a better compact, a concerted effort that produced the all-new Chevrolet Cruze. Despite some early teething pains, it sold well. What GM did for an encore proved even better – although it was not enough to save the Cruze from an early grave.

To build a lighter and more efficient second-generation Cruze for 2016, General Motors drew on its global D2XX compact platform engineered largely by Opel, GM’s former German subsidiary. The stout front-drive architecture afforded the Cruze gains of 1.5 cm in added wheelbase and 7 cm of overall length, changes that allowed the sedan to acquire a fastback profile that is de rigueur these days. 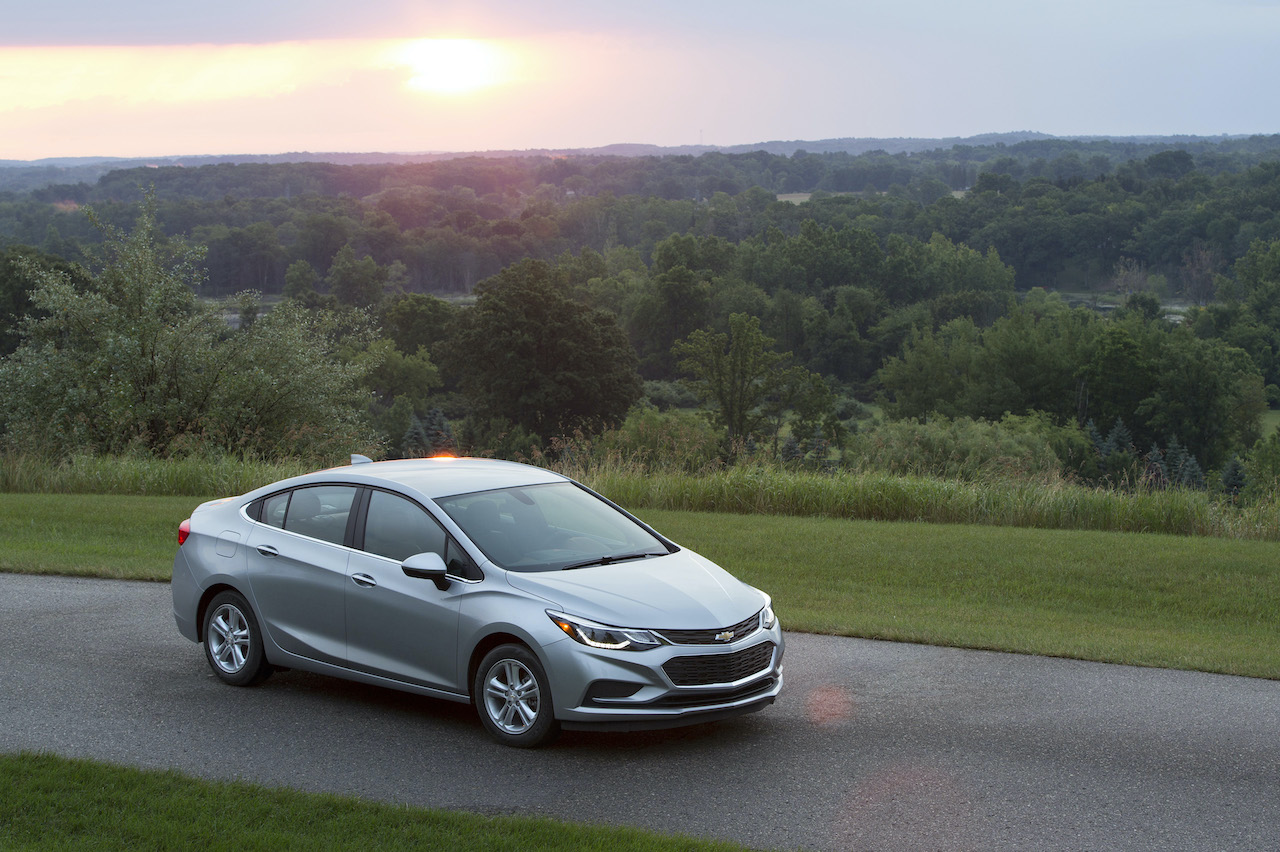 Careful pruning reduced the curb weight by 110 kg without the use of exotic materials; switching from iron to an aluminum engine block is credited for part of the weight loss. The MacPherson strut front and twist-beam rear suspension, as well as the rack-mounted electric power steering, are similar to what was found in the previous-gen model (which was marketed for one more year as the Cruze Limited).

The handsome envelope outside yielded a spacious and well-packaged cabin. The large glass area creates an airy environment for occupants, with forward visibility being especially good (but not so much rearward). Chevrolet lavishes a second interior colour on upscale trims to get away from the usual black and dark grey tones. The seating coddles passengers with deeply sculpted front buckets and a roomy rear bench.

“Much better legroom in second row compared to the prior generation. Big plus for the simplicity and clarity of the dashboard information, and the large radio screen (also where the rearview camera displays) is bright, clear with easy-to-understand large icons,” remarked a buyer of a 2018 model.

True, that. The improved MyLink infotainment system is easy to use and offers lots of connectivity options with Apple CarPlay and Android Auto functionality standard. Every Cruze also comes with a 4G wi-fi hotspot, but you supply the data plan.

Motivating the second-gen Cruze was just one engine at the outset: a turbocharged 1.4-L four-cylinder engine rated at 153 horsepower and 177 pound-feet of torque. Engineers updated the turbo four since its introduction in the earlier Cruze by adding direct injection, which provides a net gain of 15 horses and 29 pound-feet of grunt. 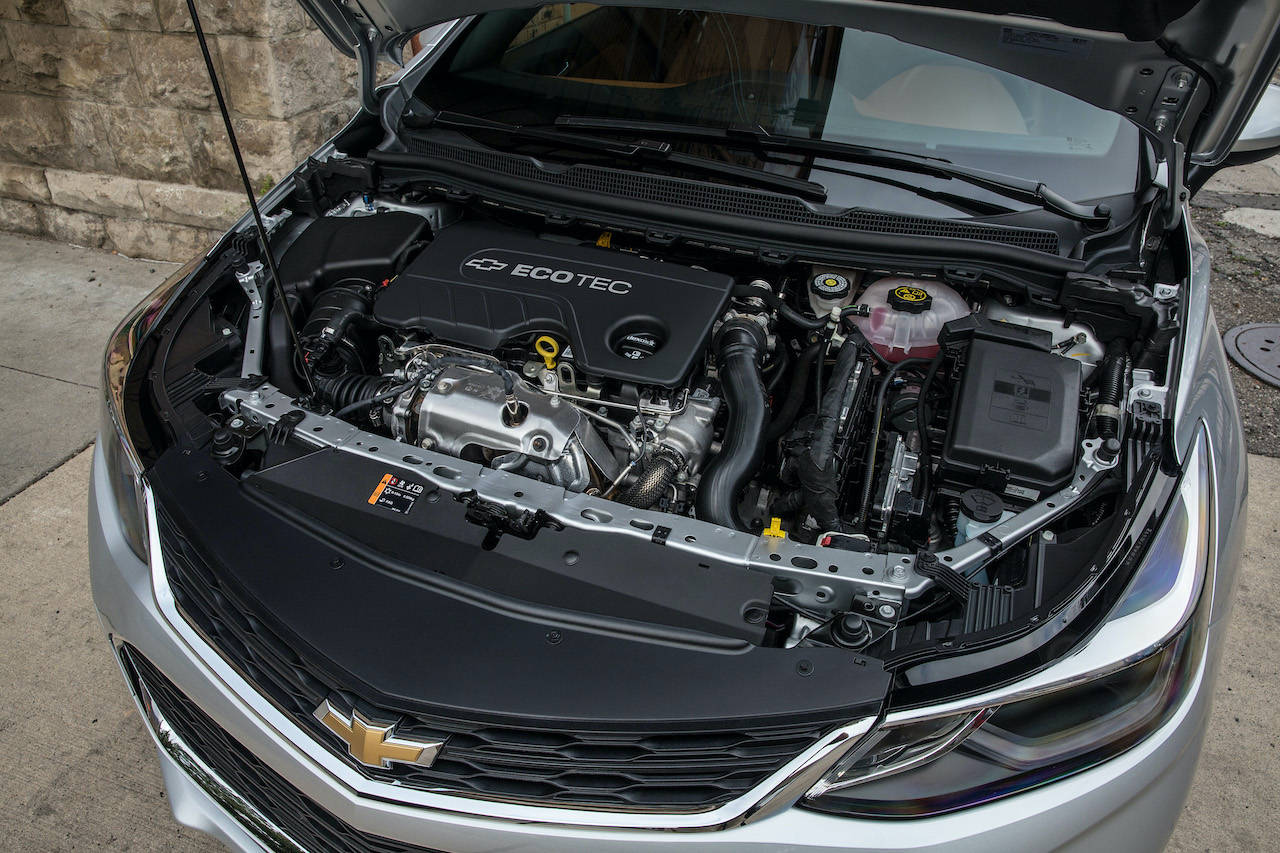 At least there were two transmission choices: a six-speed manual gearbox and a six-speed conventional automatic. The manual isn’t fun to use, though, due to a light clutch pedal and long, inaccurate throws. The automatic transmission comes bundled with an engine stop-start system to save fuel when the car is sitting at traffic lights – which annoyed some drivers because it can’t always be trusted.

“When auto-stop kicked in, sometimes the engine won’t restart when you lift the brake pedal and apply gas, so basically you are a sitting duck blocking traffic. You have to switch back to P and re-start the car like a cold start,” noted one frustrated owner.

The 2017 model year ushered in some new choices for Cruze shoppers. A five-door hatchback arrived from Mexico, which offered all the cushy comfort of the sedan plus a versatile liftback (minus 21 cm of extraneous length). Upper trims of the hatchback added a Watt’s linkage to the rear torsion-beam suspension for better wheel control.

The second big change was the addition of a new engine: a 1.6-L four-cylinder turbodiesel that cranks out 137 hp and 240 lb-ft of welcome torque. While not as robust or smooth as Volkswagen’s TDI, the Opel-sourced engine gets the job done and actually saves more fuel than VW’s oil-burner. It works with the manual gearbox or a nine-speed automatic unique to diesel models.

The Cruze earned a light renovation for 2019 with revised front and rear fascias, new wheel designs and an improved touchscreen and software. The best news? The engine’s automatic stop-start function can now be switched off. And the ropey manual transmission is no longer available (no great loss).

What is a great loss is the Cruze itself, as 2019 marked its last year of production. U.S. assembly wrapped up last March at GM’s Lordstown, Ohio, plant. Its termination is blamed on consumers’ unending love affair with sport utilities and crossover SUVs – ignoring the reality that hundreds of thousands of Toyota Corollas, Honda Civics and Hyundai Elantra sedans are sold every year, too.

By most measures, the Cruze is a mid-pack econobox performer. Zero to 97 km/h comes up in 7.7 seconds with the 1.4-L gas turbo engine and the automatic transmission, and a less exhilarating 8.3 seconds with the imprecise stickshift. The diesel model splits the difference, posting an 8.0-second time with its unique nine-speed automatic. 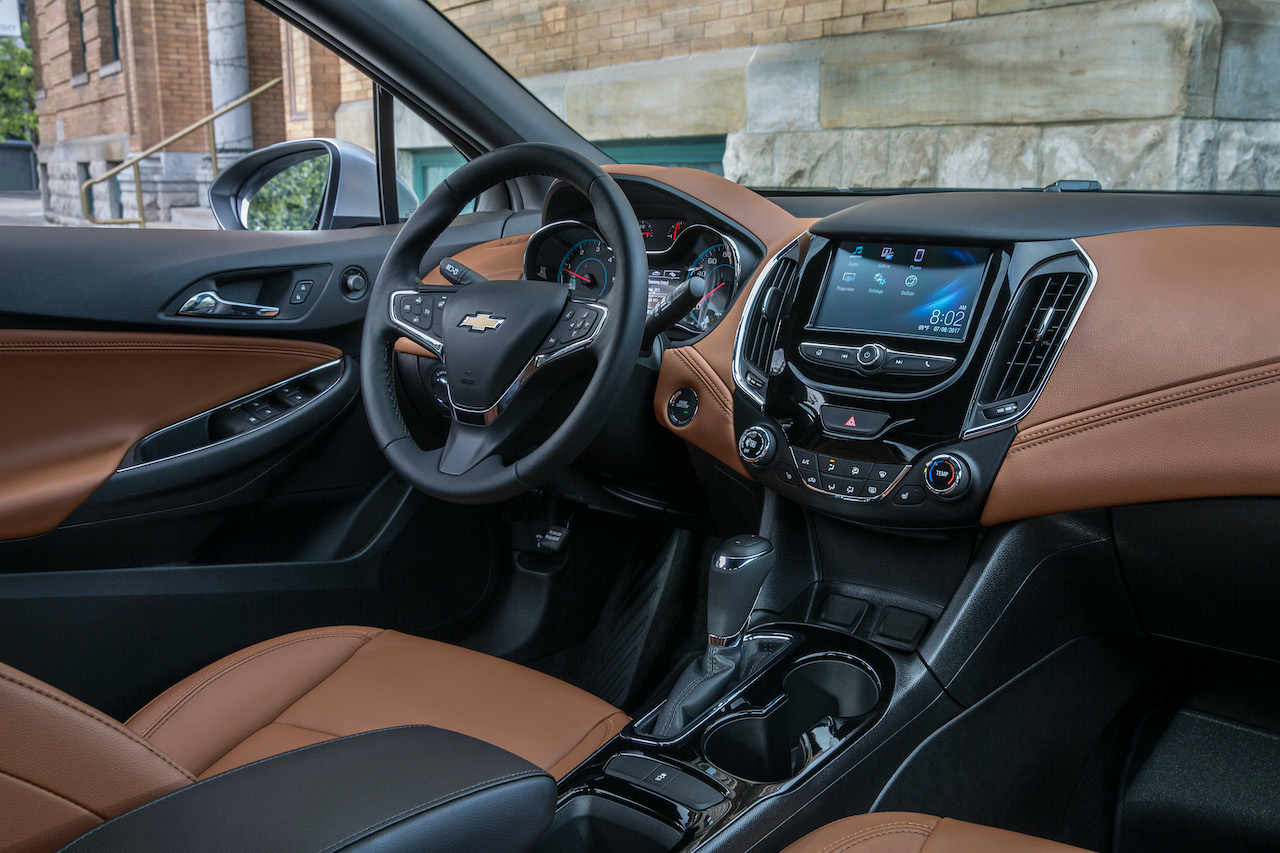 The well-sorted suspension provides a smooth, compliant ride over most bumps and lumps. In a published road test, a Cruze hatchback generated 0.87 g on the skidpad, which is grippier than the 0.82 g posted by the sedan. While the electrically assisted steering provides little feedback, it is reasonably direct and accurate, and free of twitchiness on straight stretches of road.

True to its name, the Cruze is a good long-distance traveller. The ride is serene and cabin noise is subdued, registering just 69 decibels at 112 km/h – comparable to a midsize sedan like Chevy’s Malibu. That’s not by accident: Chevrolet has always tried to make its mark in the small-car segment by delivering a quiet, solidly built car to buyers on a budget. Likewise, fuel economy is exemplary; drivers regularly surpass 5.6 L/100 km (50 mpg) on the highway, and 4.7 L/100 km (60 mpg) with the diesel model.

Assigned to compete in a hotly contested segment that includes standouts like the Honda Civic and Volkswagen Golf, the Chevrolet Cruze acquits itself admirably by delivering lots of good tech features, a comfortable cabin, great fuel economy and a large trunk, all wrapped in slick bodywork.

Less admirably, both the gasoline and diesel engines feel a little underpowered, and owners dissed the automatic stop-start feature because it sometimes stalls the engine and it can’t be disabled (as noted, a kill switch was installed in 2019 models).

In terms of reliability, the second-generation Cruze has performed better than average, arguably making it the best small car General Motors has ever engineered and built. That’s not to say it didn’t come with a few deficits of note. Foremost, owners of 2016 and 2017 models have reported problems with the gasoline engine; specifically, cracked pistons. 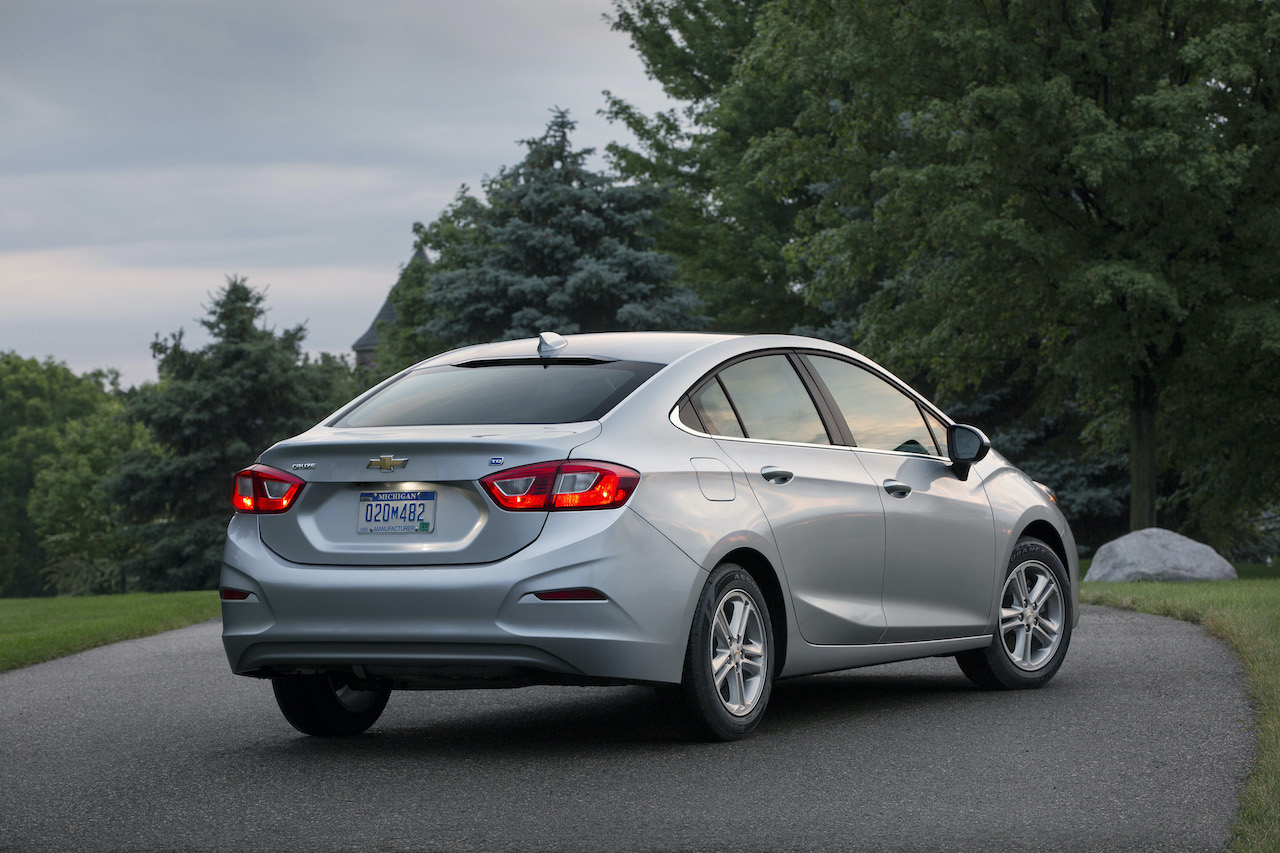 There’s a technical service bulletin that covers 2016-2017 Cruze models with the 1.4-L turbo gas engine, issued for vehicles running rough and displaying code DTC P0300. If any cylinder is found with low compression or excessive pressure leakage due to piston damage, reportedly all four piston sets get replaced. Those with damaged cylinder walls get a new engine.

The diesel engine has displayed a couple hiccups of its own, including particulate filter regeneration failures and leaking diesel exhaust fluid (DEF) tanks. Other mechanical issues reported by Cruze owners include failed power-steering racks, overheated engines, cabin water leaks and faulty turbos, all in small numbers.

Significantly, there are no faults in the Cruze that constitute an epidemic. It’s essentially a stylish and well-made small car with roots in Detroit and not Yokohama. The Cruze’s greatest sin that led to its demise? The slim profit margin it provided to dealers. 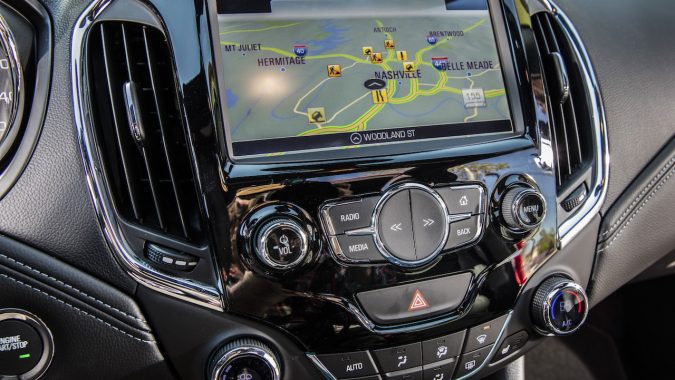