Marketed as a “four-door coupe” with a swoopy roofline.

The average age of a new-car buyer is about 53 years – hardly the driver demographic carmakers envision when they roll out their sleek new models. Although 53-year-olds usually make their car payments on time.

Attracting younger buyers is a key goal of brand managers, because while older drivers tend to be loyal, their numbers naturally fall off as they age. Young buyers may be fickle, but they’ve got many car-buying experiences to come.

Eager to shake its image as a maker of “doktorwagens” for physicians and hospital managers, Mercedes-Benz launched its entry-level CLA-class sedan in 2013 wearing bold lines, exaggerated proportions and big alloys. It “looked like a design sketch” come to life, as one designer put it, not to mention “irrational.”

With more than 750,000 CLAs sold since inception in 2013, the gambit paid off handsomely. It was the most successful launch of a new Mercedes-Benz model in 20 years. Around 80 per cent of buyers are new to the Mercedes brand, making the irrational CLA an effective draw for a new generation of buyers and future M-B loyalists.

Marketed as a “four-door coupe” with a swoopy roofline, the CLA’s fashion-forward styling actually conceals modest underpants. It makes use of the same front-wheel-drive platform of the European-market A-Class hatchback and the B-Class hatch sold in Canada since 2006. Not that that’s a bad thing: the chassis is superbly rigid and built to Mercedes’ exacting standards when it comes to collision mitigation.

The CLA is actually longer and wider than Mercedes’ C-Class, the car that the CLA displaced as the automaker’s entry-level sedan, at least until the A-Class came along. Too bad its exceptionally long wheelbase somehow doesn’t yield the best back-seat comfort. Climbing into the rear seats requires bending under the low roofline; your noggin will become the unwitting victim of fashion, likely more than once. 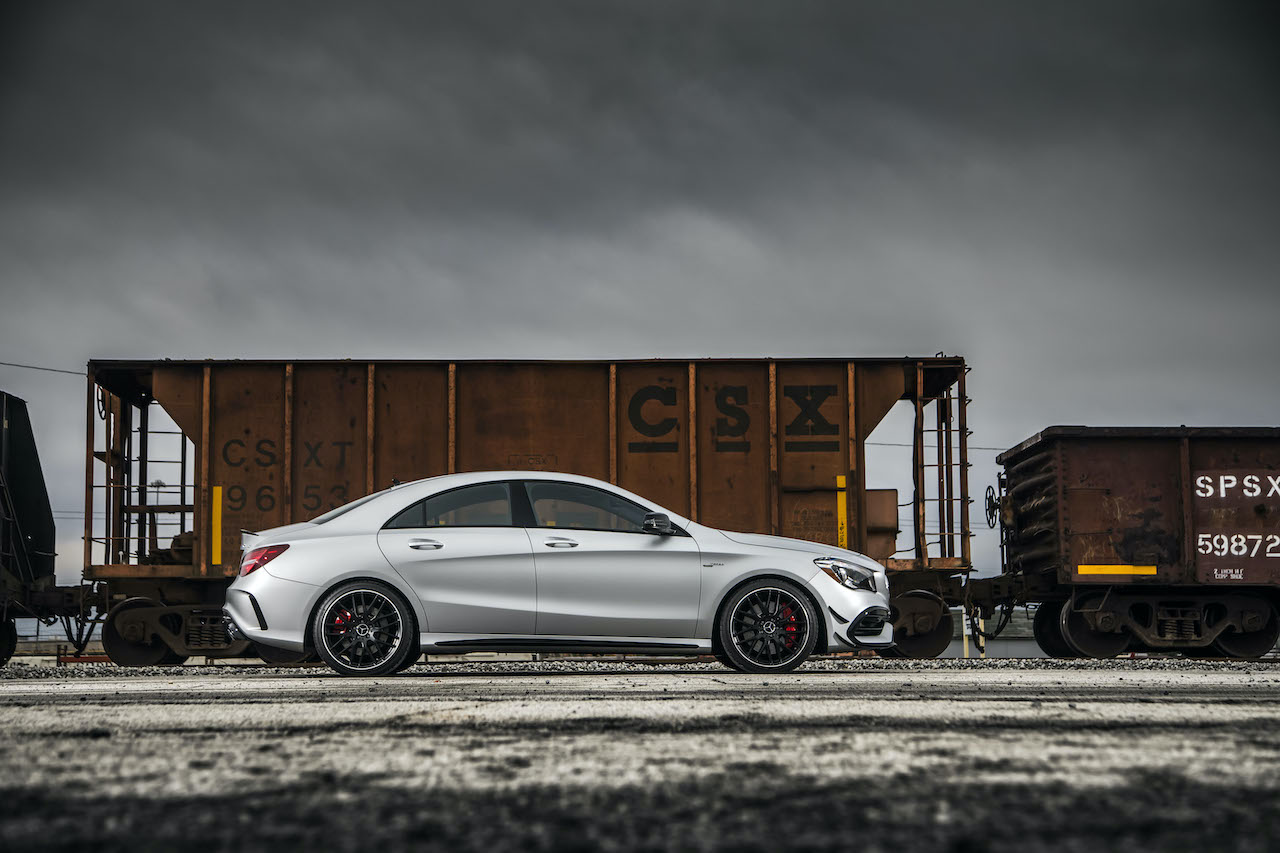 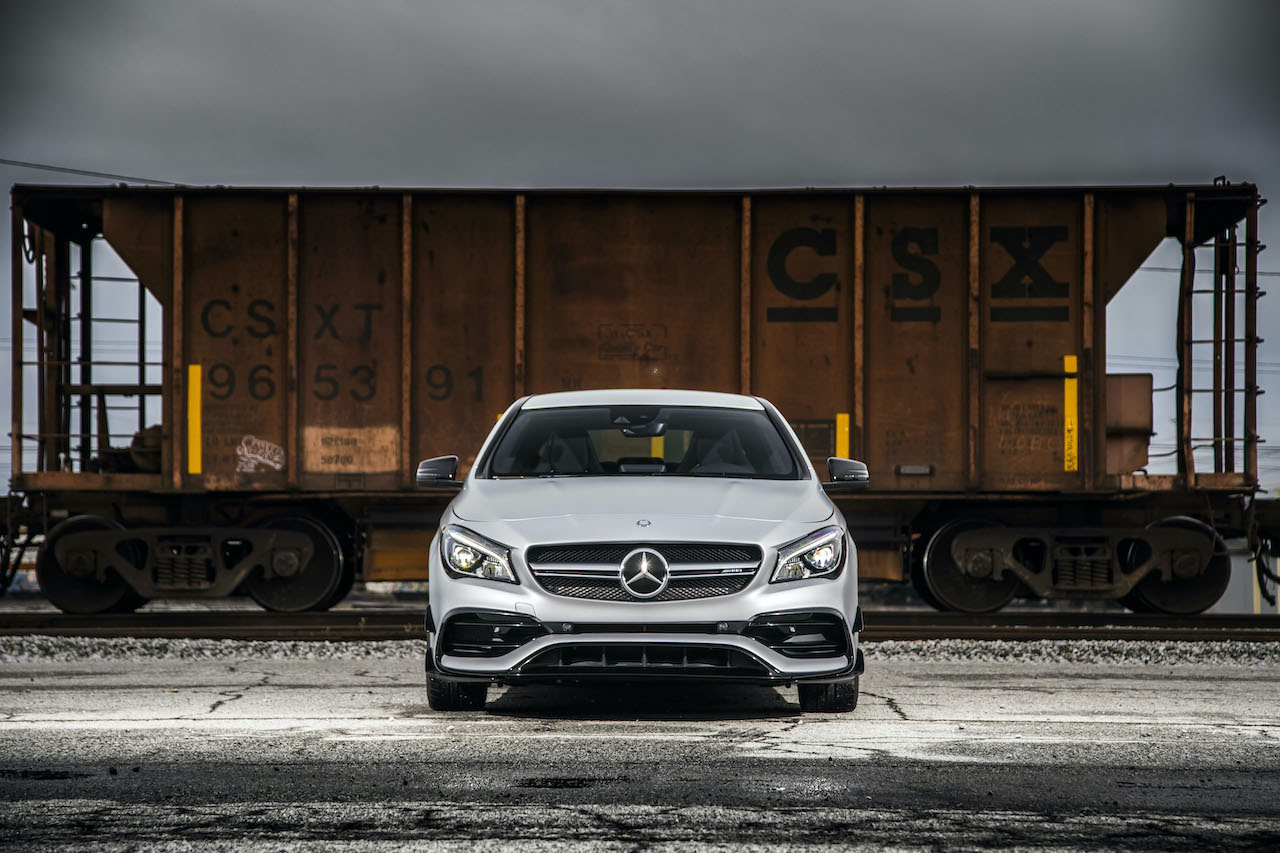 “Looks sleek and rides comfortably in the front of the cabin. But any ‘friends’ that are over 5 feet 7 inches tall you place in the back seats will be friends no longer,” advises one CLA owner online.

Plastic is dominant inside as stylists defiantly ignored Mercedes’ conventions and made the dashboard out of a wavy vinyl panel, punctuated by air vents seemingly pried out of Flash Gordon’s spaceship. The infotainment display looked tacked on and the interface felt outdated even in 2013. Whether the design is attractive or not is up to the observer, but it amounted to risky behaviour on the part of Mercedes. 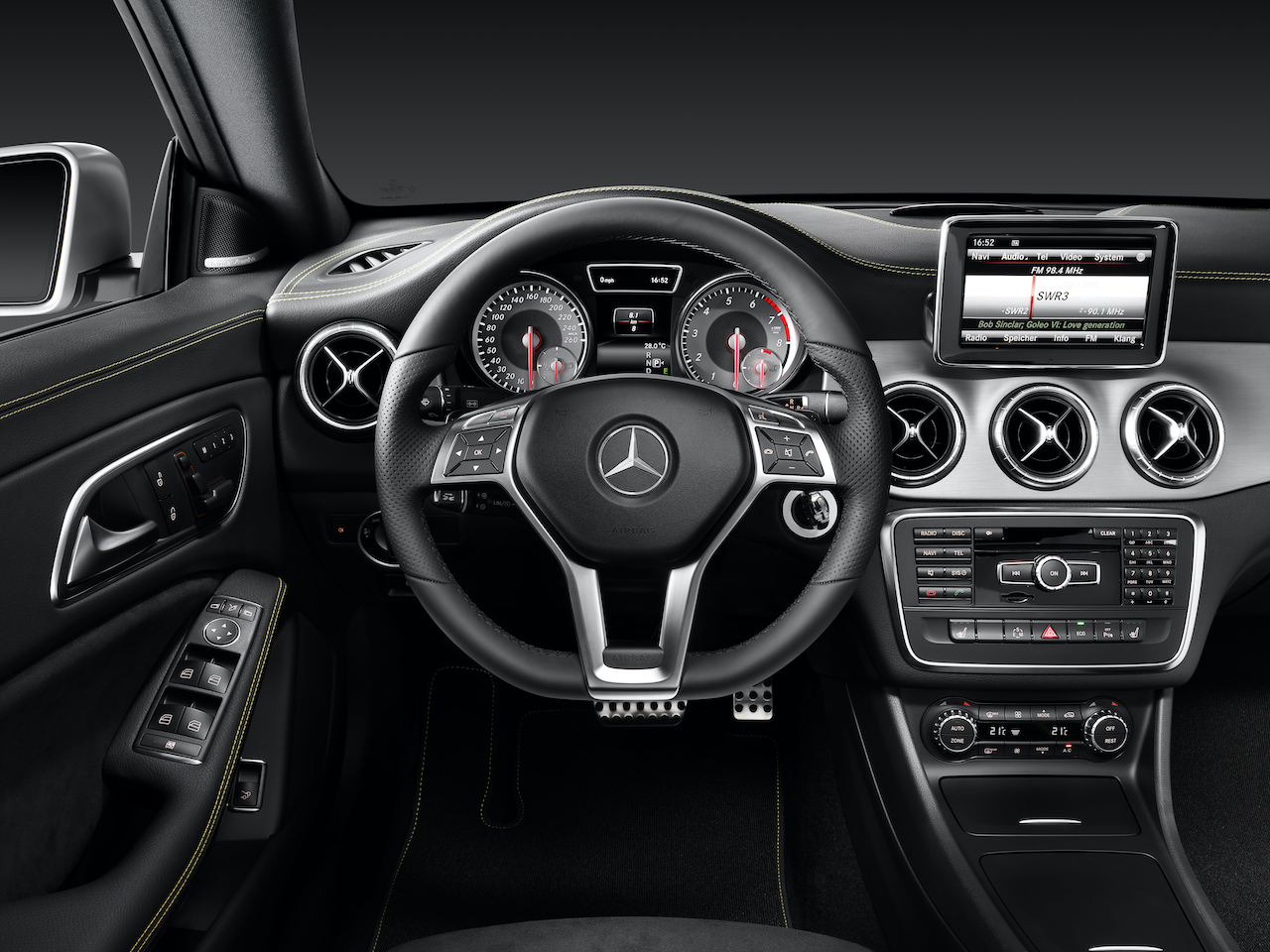 No risks were taken with safety. All CLA-Class models feature advanced stability and traction controls, antilock brakes, a driver knee airbag, front seat side thorax airbags, front seat side pelvic airbags and full-length side curtain airbags. The “Mbrace2” emergency telematics system is standard, as is Collision Prevention Assist, which uses radar to identify potential collision situations and intervenes with braking as needed.

Motivating all first-generation CLA250s is a turbocharged and direct-injected 2.0-L four-cylinder that produces 208 hp and 258 pound-feet of torque. A seven-speed dual-clutch automatic transmission dispatches power to the front wheels. All-wheel drive is limited to the CLA250 4Matic.

The CLA45 AMG performance model uses a firecracker version of the 2.0-L engine that features a twin-scroll turbocharger and reinforced internal components. A quicker-shifting variant of the seven-speed autobox sends power to all four wheels. Launch control is included to help rein in the 355 horses and 332 lb-ft of torque on tap. 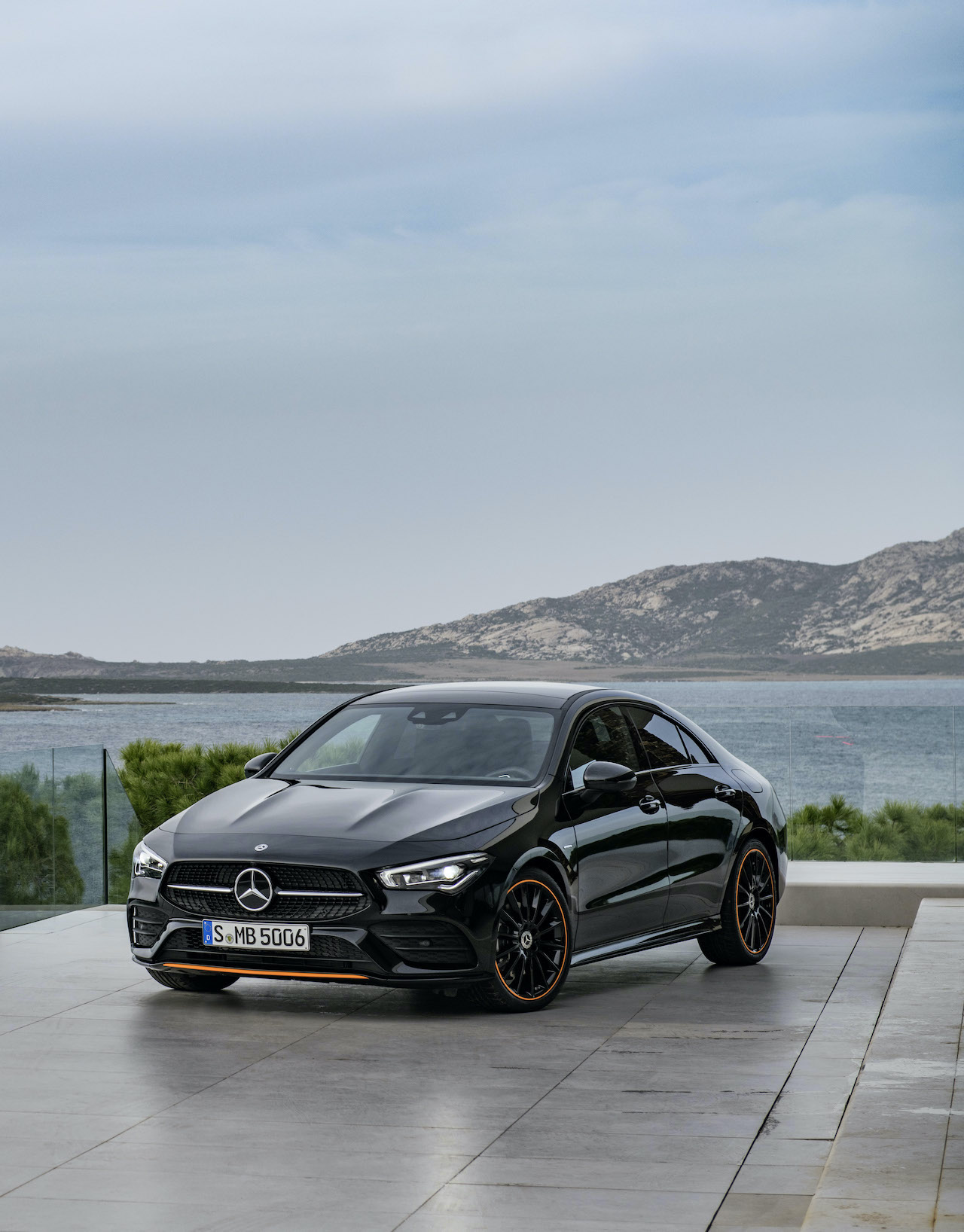 For 2015 the CLA’s standard sport suspension was replaced by a softer suspension, making the sport setup optional. Dual-zone automatic climate control and keyless ignition became standard equipment, along with a larger 7-inch centre display screen. The AMG version earned drivetrain changes in 2016, including more power (375 hp and 350 lb-ft of torque) and shorter transmission gear ratios. There’s also a new AMG Dynamic Plus package with a limited-slip front differential and an adaptive suspension.

The 2017 models got a mid-cycle refresh that included styling tweaks, new standard and optional features (significantly, Apple CarPlay and Android Auto), and a wider, slimmer infotainment screen. Newer models remained largely unchanged, although the AMG model got some additional standard gear. The new 2020 CLA-Class trickling into showrooms represents the first of the second-generation models.

With its strong turbo four-cylinder and quick dual-clutch automated transmission, the CLA250 delivers enough performance to challenge a lot of sporty compact cars. Its 208 horses are sufficient to coax the CLA from 0 to 97 km/h in 6.3 seconds. The extra grip provided by the 4Matic’s all-wheel-drive system reduces the time to 6.1 seconds. Alternatively, the CLA45 AMG can do the deed in 4.2 seconds – or 3.8 seconds with the newer 375-hp engine.

The CLA has the sporty part of the equation down pat. Mercedes endowed the CLA250 with quick steering and excellent body control, which becomes immediately apparent to the driver. It can generate 0.93 g of lateral acceleration on a skidpad – impressive grip for a small car with a premium badge. Unfortunately, the luxury side suffers a little. 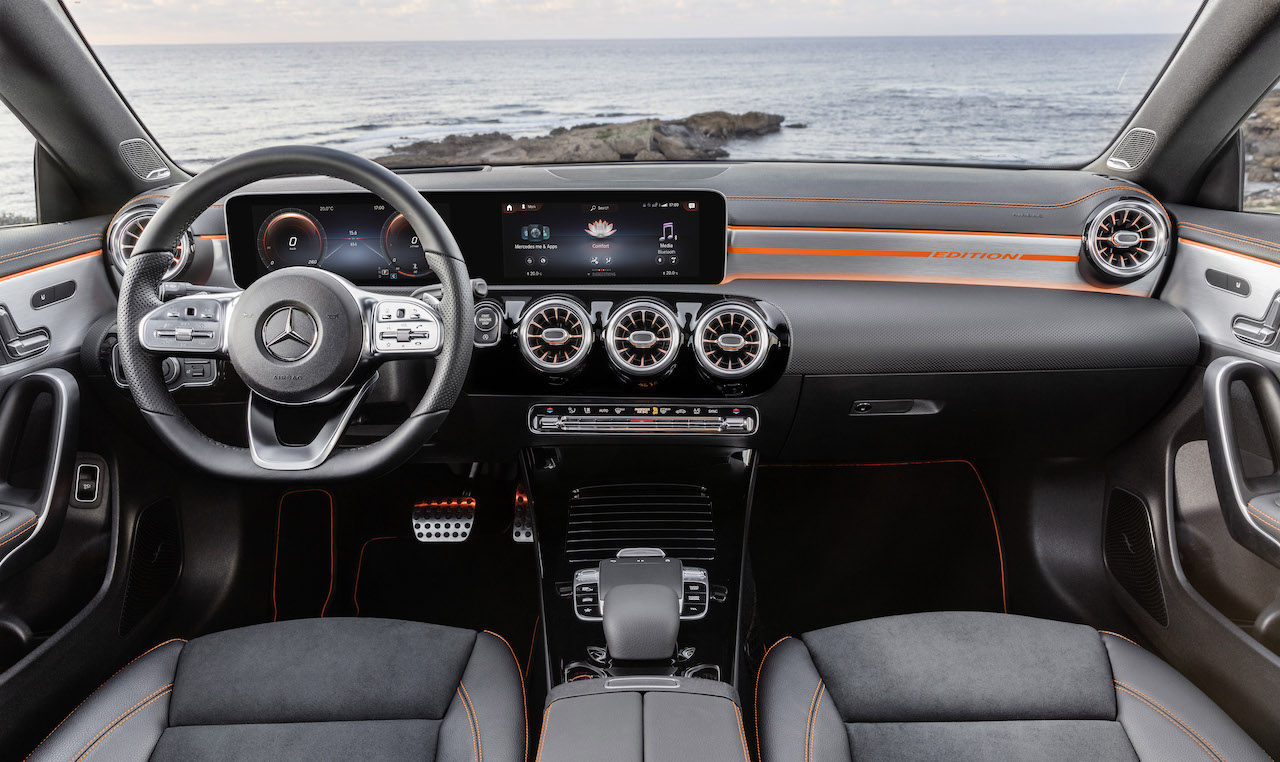 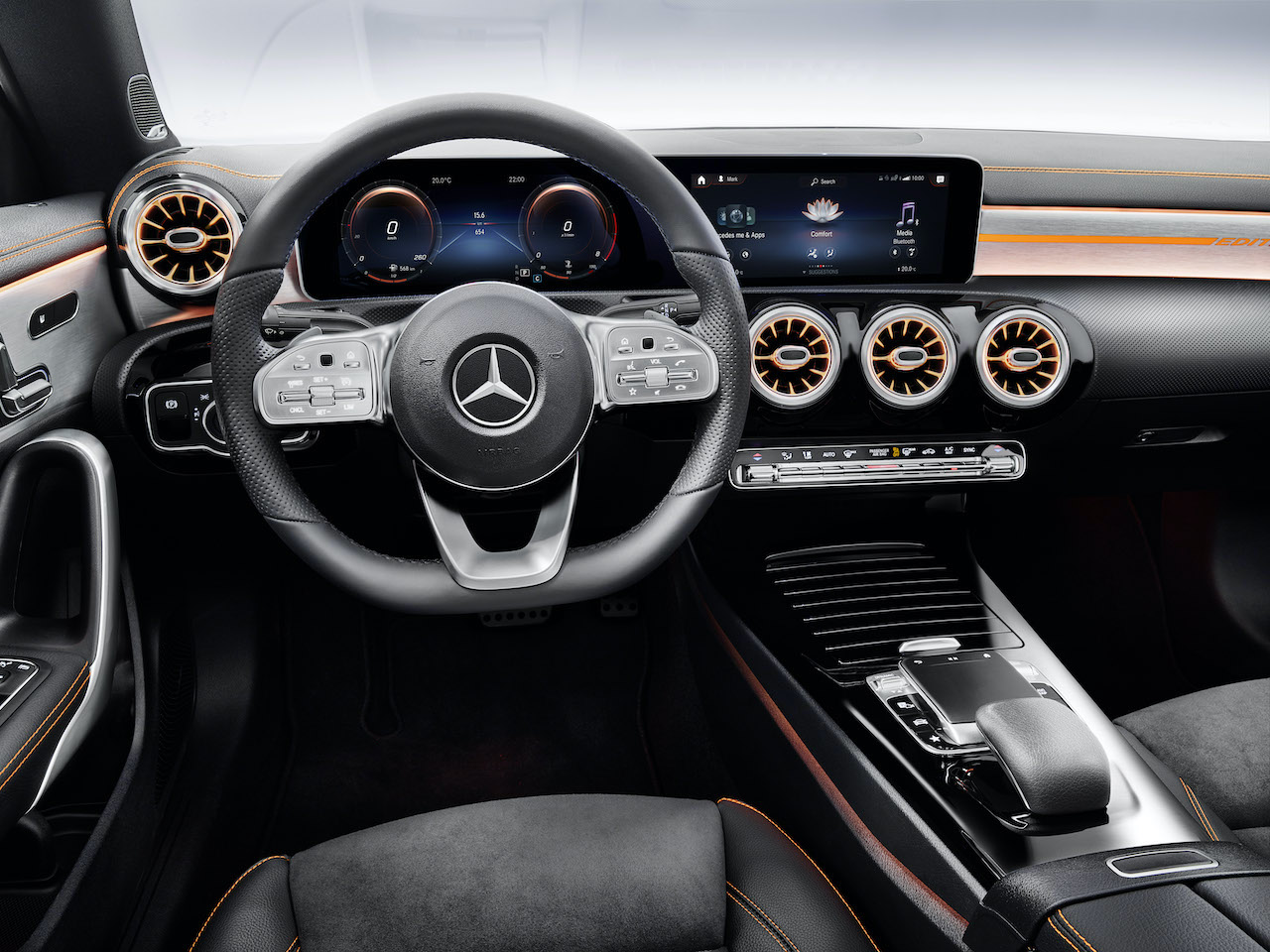 Insufficient wheel travel is said to be responsible for a stiff ride that can disappoint. It may also have to do with the tires: the CLA is equipped with standard run-flat tires so that trunk space isn’t compromised with a spare tire. Run-flats have very rigid sidewalls out of necessity, a criterion that results in a brittle ride quality. However, some used CLAs do wear regular tires; make note of the rubber when shopping around.

On the plus side, the CLA is exceptionally quiet at speed, the product of a nation that still boasts no speed limits on rural stretches of its famed Autobahn. And fuel economy is exceptional for a sporty sedan; owners report highway mileage better than 6.2 litres/100 km (45 mpg) using premium-grade fuel.

“It does have an extraordinarily rough drive. You feel every single bump in the road, road noise is relatively high and the dual clutch transmission is pretty mediocre. It downshifts randomly sometimes, and the manual mode is way too slow to respond,” posted the owner of a 2015 CLA250.

Reliability has been very good, though the CLA-Class presented some teething pains during its inaugural 2014 model year. Chief among the complaints were concerns about the turbo engine hesitating, stalling and going into “limp” mode, sometimes at highway speeds.

Dealers usually respond with a software update, which sometimes proved to be a temporary fix. A few owners suggested that the driveability issues were traced back to a bad ground on the chassis, which had been compromised by thick paint. Others pointed to a failed throttle actuator as the culprit. The problems appear to be largely limited to 2014 and 2015 models. 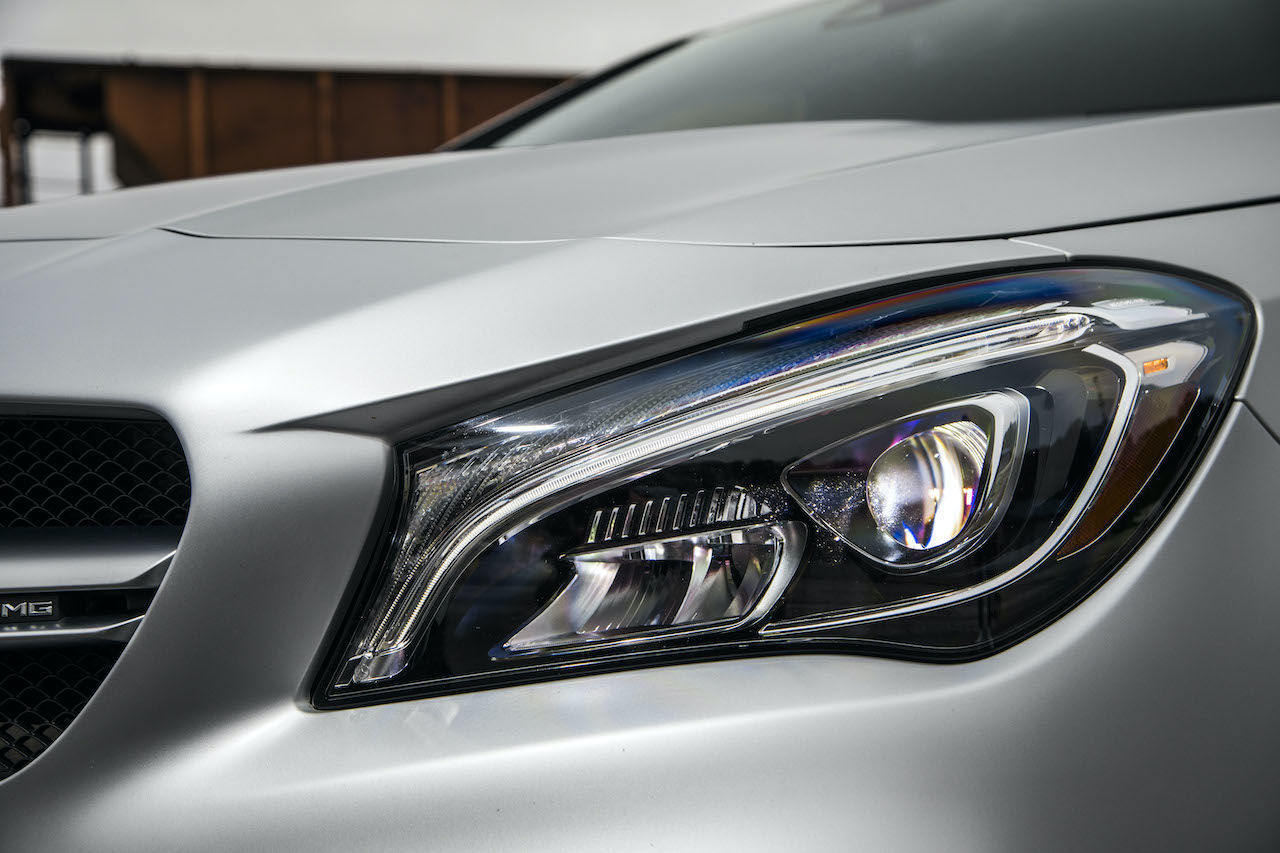 Another weakness in the CLA is an unreliable water pump in early models, resulting in overheated engines. An improved pump was introduced. Reportedly, replacement costs more than $1,400 in parts and labour – a typical post-warranty expense familiar to Mercedes owners.

As mentioned, the CLA’s run-flat tires ride stiffly, generate noise, wear quickly and are expensive to replace – budget at least $400 per tire. To add insult to injury, run-flat tires are susceptible to failure all on their own, sometimes starting with a sidewall bubble.

“All four tires have blown out. I have never hit anything to make them blow, just normal, careful driving. They are blowing out for no reason and it’s a safety hazard,” noted one CLA driver. Plenty of owners have switched to conventional tires out of frustration.

Mercedes-Benz could have made its entry-level sedan a smaller version of its ever-popular C-Class car, but it didn’t. Rather, it took the risk of presenting Gen-X and Millennial buyers with a stylish luxury “coupe” at a relatively accessible price point. It works. 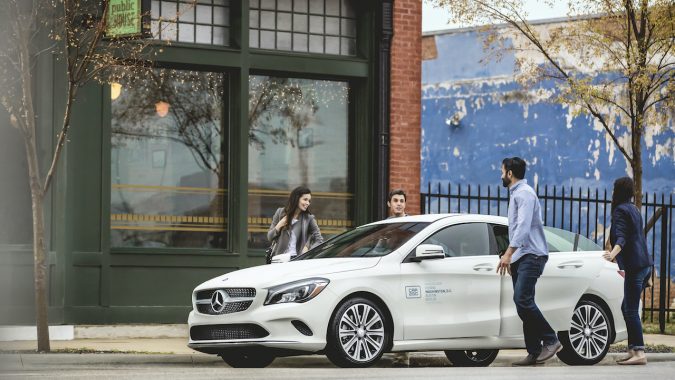 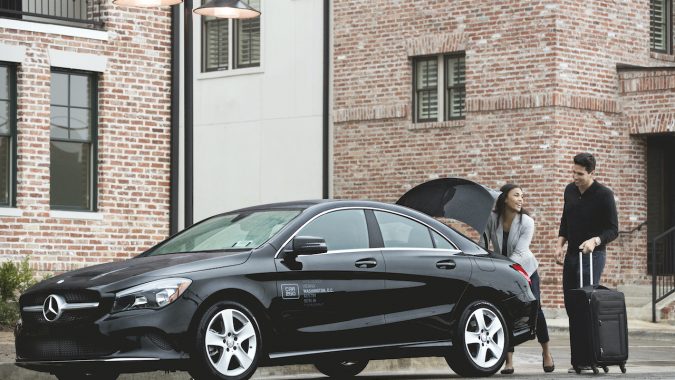