The return of the affordable sports car.

“It needs a cargo net. Your groceries will be all over the place.”

This mild criticism, proffered by a Scion FR-S owner, illustrates the challenges of using a bona fide sports car as a daily driver. It messes with your stuff, not to mention your head.

“If you have the shifting skills to keep this car in its power band above 4500 rpm, this car can absolutely blow your mind and give you a driving experience far beyond the price they are asking for it,” posted an enthusiastic owner.

Flush with cash made by selling the world’s most popular car – the beige-pants Corolla – Toyota purchased one-sixth ownership of Subaru, an automaker that manufactured airplanes initially before dabbling in small cars, just like Saab.

The two Japanese companies consummated their union by collaborating on a genuine rear-drive sports car to add some zing to the staid lineup at Toyota, and give Subie fans something less weird to drive. The result is a near-identical pair of cars: the FR-S sold through Toyota’s Scion dealers – later rebadged as the Toyota 86 – as well as the Subaru BRZ. 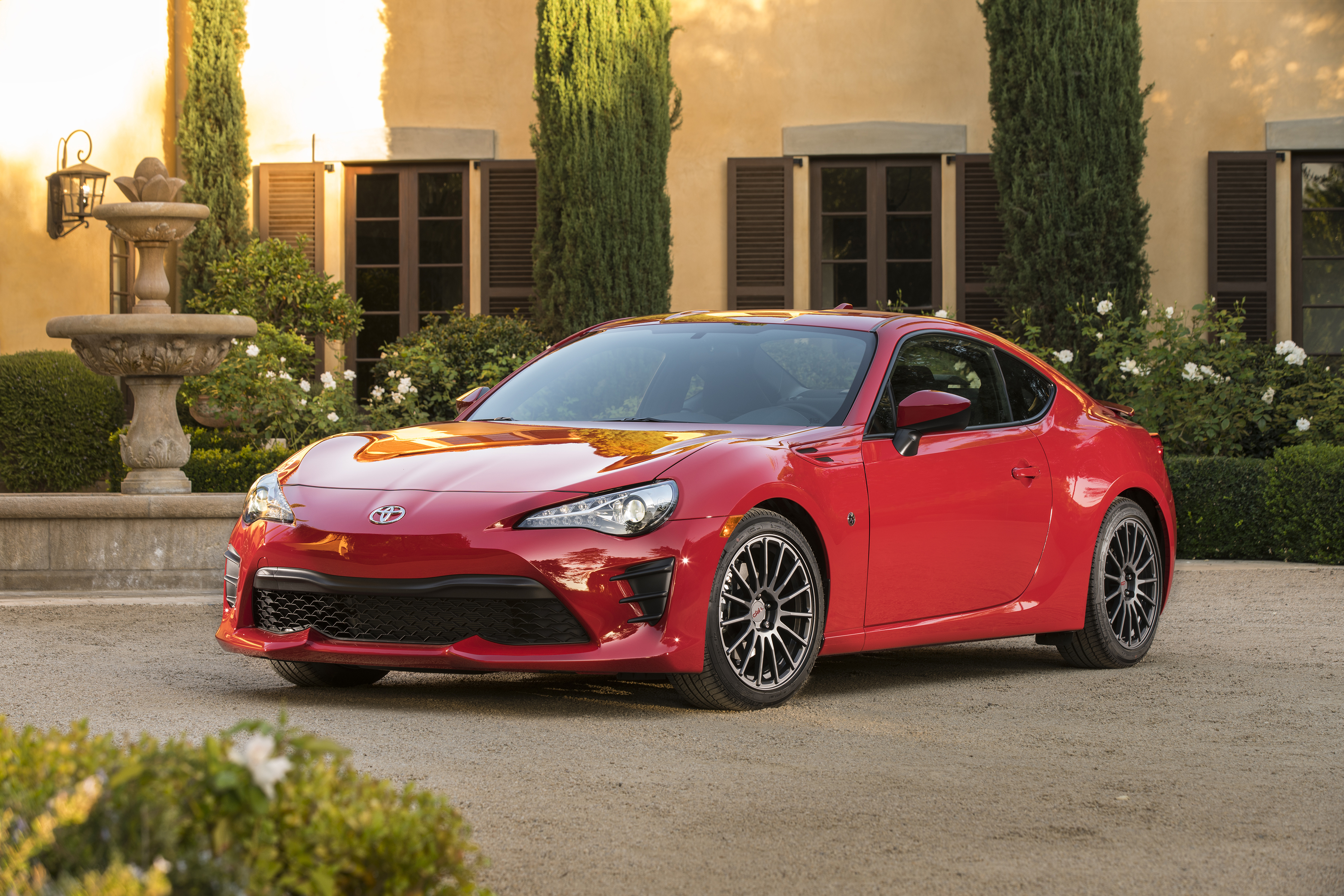 Subaru did the heavy lifting by designing the car’s chassis, powertrain and passenger cabin. Product planners recognized Subaru’s horizontally opposed four-cylinder engine was the ideal powerplant, given that its “boxer” architecture would allow the engine to lay low and enhance handling. At just 46 centimetres above the road surface, the car’s centre of gravity is lower than that of a Porsche Cayman; only the Chevrolet Corvette ZR1’s is lower.

By mounting the engine 24 cm farther back in the chassis than in an Impreza, 54 per cent of the car’s weight presses on the front wheels and 46 on the rear, which is fairly close to perfection. The strut-front and multilink-rear suspension was adapted from the Impreza, too, and the steering is electrically assisted.

The shape of the body, styled by Toyota’s designers, was determined largely by the platform’s hard points fixed by Subaru’s engineers. It’s a good example of form truly following function. Both Subaru and Toyota models shared the same body stampings and hardware. Wheels, badges and some trim pieces were all that differentiated the pair.

Building a back-to-basics sports car weighing just 1250 kg means it’s going to be small. Still, the comfortable and supportive front seats are mercifully accommodating. People of just about any size should find an agreeable driving position, and the view outside is good. You sit low in this car, a feeling that may be entirely foreign to anyone under the age of 35.

Technically it’s a four-seater, though only small children can really spend any time in the back seat, separated by a substantial drivetrain hump. The trunk is tiny and the opening even smaller, which does nothing to aid practicality. At least the rear seats fold to open up the cargo space. 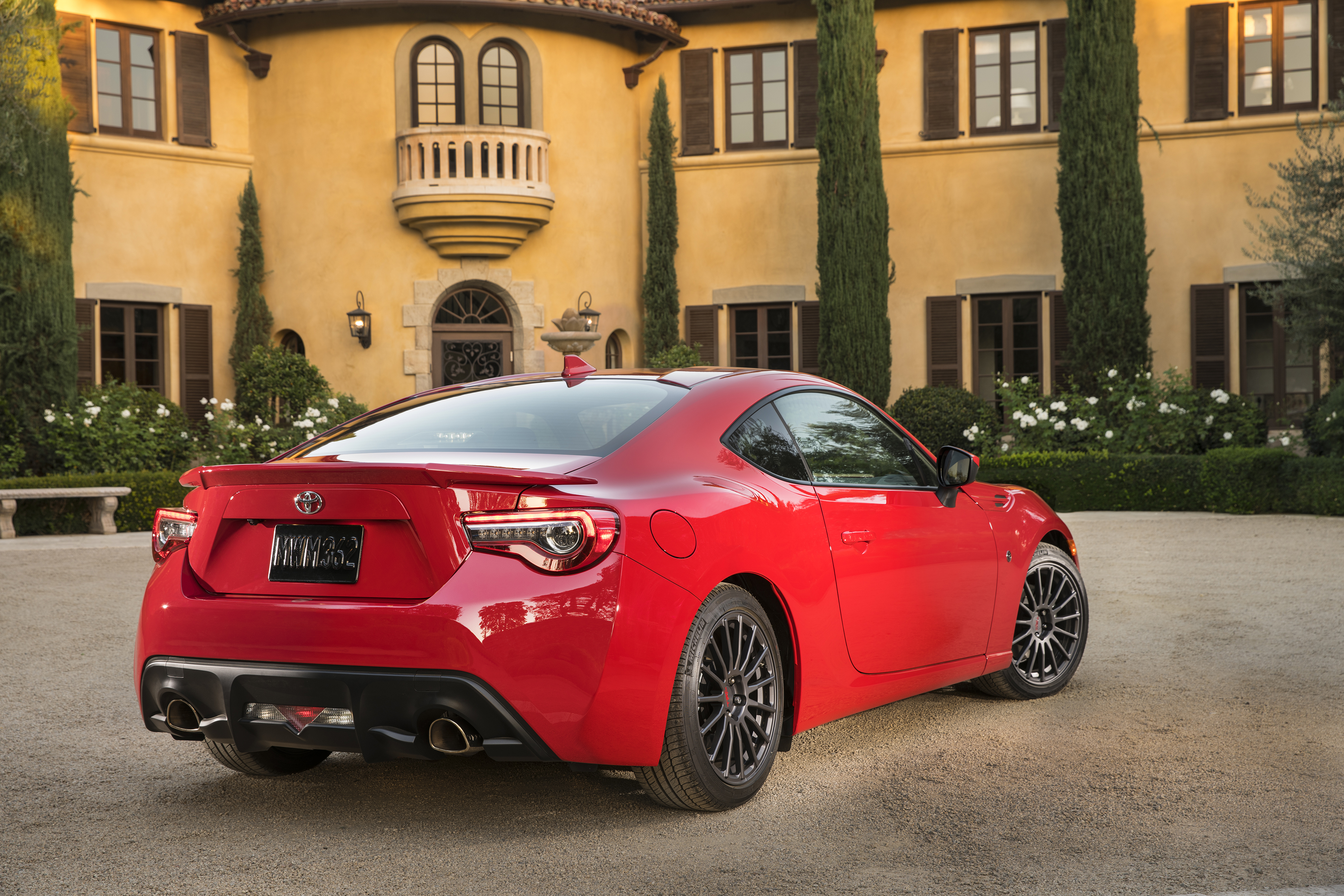 Even the base models were loaded with high-tech features like Bluetooth phone and audio connectivity. Unfortunately, they’re controlled by a touchscreen interface that’s difficult to use, thanks to unhelpful menus and tiny virtual buttons that are hard to press. Toyota’s infotainment system is marginally better than Subaru’s.

Powering the BRZ and FR-S is Subie’s FA-series, naturally aspirated 2.0-L four cylinder, which makes 200 hp, but an underwhelming 151 lb-ft of torque. Toyota’s direct-injection system, which squirts fuel both in the intake ports and into the cylinder, allows for a lofty 12.5:1 compression ratio. Buyers could choose between two six-speed transmissions made by Toyota affiliate Aisin: a short-throw manual gearbox and a conventional automatic.

In terms of subsequent model years, the 2015 BRZ/FR-S twins got a retuned suspension, new exhaust tips, a shark-fin antenna and updated interior trim. An improved touchscreen infotainment system and a standard rearview camera followed in 2016.

The BRZ earned significant updates for 2017, with a slight increase in power (to 205 hp, but only with the stick), revised manual transmission gearing and suspension tuning, styling tweaks, LED headlights, a new standard hill-start assist system, and an available performance package with bigger Brembo brakes.

When Toyota deep-sixed its Scion brand in 2016, it shifted a few models to its mainstream showrooms. The FR-S was rebadged as the Toyota 86 for 2017, drawing inspiration from the mid-1980s Corolla GT-S that’s become a drifting legend. The 86 got the same 5-hp power increase, revised manual-transmission gearing and suspension tuning, and restyled fascias. 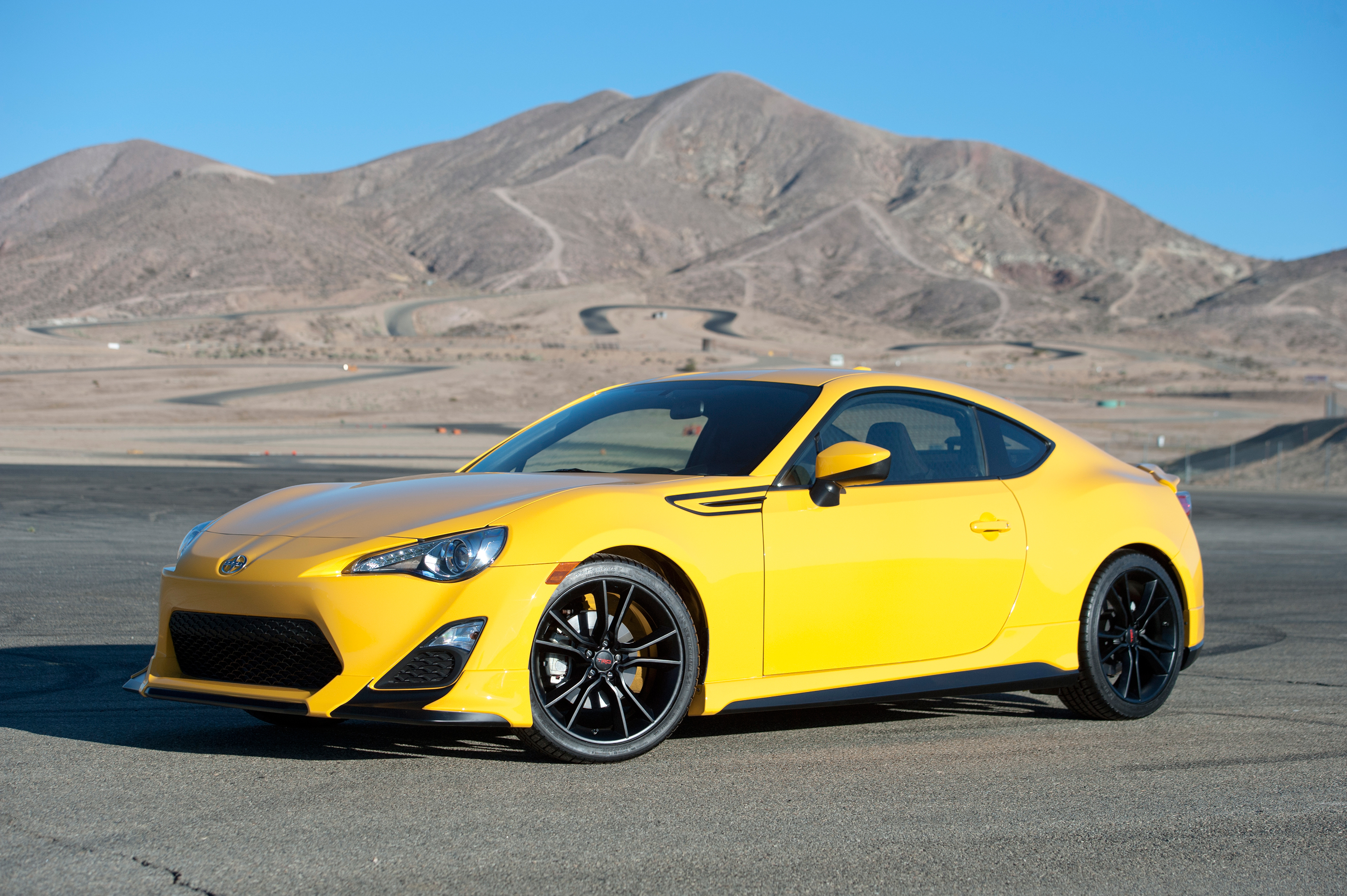 When the pair arrived in mid-2012, they were hailed as the return of the affordable sports car. Someone dubbed it the MX-5 Miata coupe Mazda did not build, although Mazda would later endeavor to make one (the RF). Like the Miata, the BRZ/FR-S isn’t a very fast car, but it’s direct in its responses in a way that feels hard-wired to the pilot’s brain.

“Car definitely needs more power. But the balance in cornering and track driving is incomparable to anything else in this price range,” boasted the owner of a 2015 BRZ online.

Underscoring the not-quick part, 0 to 97 km/h comes up in 6.4 seconds with the stick and 6.7 with the paddle-operated automatic. The tires have a lot to do with the numbers, apparently; one FR-S could only muster 7.1 seconds, thanks to its lacklustre all-season Bridgestones. This is a chassis that’s very sensitive to tire picks, so pick well.

The tires have a profound impact on cornering ability, of course, and given that the BRZ came with Prius-spec Michelin Primacy HP tires, it’s astonishing the hard rubber could generate 0.87 g of lateral grip on a skidpad. Properly outfitted with performance tires, however, and this rear-drive car can easily muster 0.91 g or better.

In other ways, the BRZ/FR-S is docile. It remains relatively quiet and composed on long highway runs, and the suspension is not out to punish the car’s occupants – though if you insist on low-profile 40- or 35-series rubber, all bets are off. Fuel economy is said to be decent at about 9.5 litres/100 km in mixed driving. 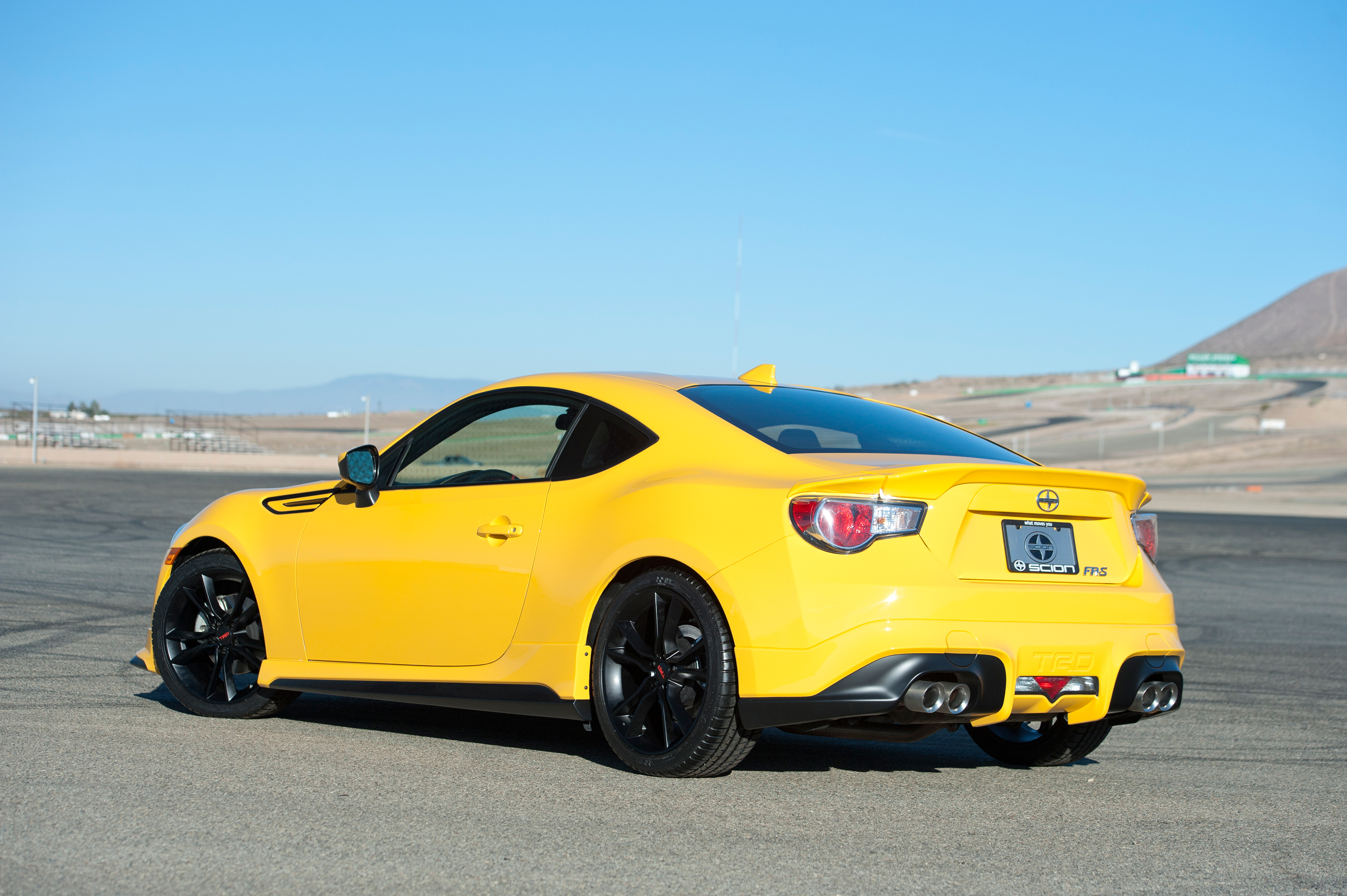 Sports cars are not for everyone and, with the exception of Porsche, nobody got rich building and selling them. The Subaru/Toyota pair plies a microscopic niche that’s arguably getting smaller, yet the cars have garnered a rabid following that appreciates their charms.

“The boxer rumble is nice. Steering is quick and nimble, suspension is firm and confident. Acceleration could be better, but who cares when you are giggling and grinning as you carve up any curve with confidence,” wrote an ardent fan.

Affordability is a strong draw, and reliability is equally important to budget-sensitive buyers. Both the Toyota/Scion and Subaru iterations hail from a Subaru factory in Japan, which usually means quality is a sure thing. Documented problems are not unknown, however.

The engine’s high-pressure fuel pump is notorious for making an annoying chirping sound that’s unbecoming. Dealers have replaced lots of pumps under a TSB campaign; ask about it if it is not offered to you. The manual transmission may also become noisy; some owners have had to replace the clutch, throw-out bearing and even the clutch fork and flywheel early. Another sign of wear is poor upshifts between certain gears.

Owners have reported that the infotainment touchscreen can become unresponsive to the touch, necessitating replacement. A few have noted that the electric power steering may intermittently fail, then come back on. The power-assisted windows may screech and appear scratched by internal guides (addressed in later cars). Door seals may loosen and droop, and high-mileage engines may consume motor oil.

More positively, the Lemon-Aid used-car guide notes that Toyota’s application of both direct and conventional port fuel injection appears to mitigate carbon buildup on the valvetrain, which strangles so many direct-inject engines these days.

We’ll leave the last word to this qualified assessment by a happy owner: “If you can live with the small size, harsh ride, some road noise, just-okay radio, and if you understand that it’s really not a four-passenger car, and that it requires premium gas, and more, (then) you’ll be fine.” 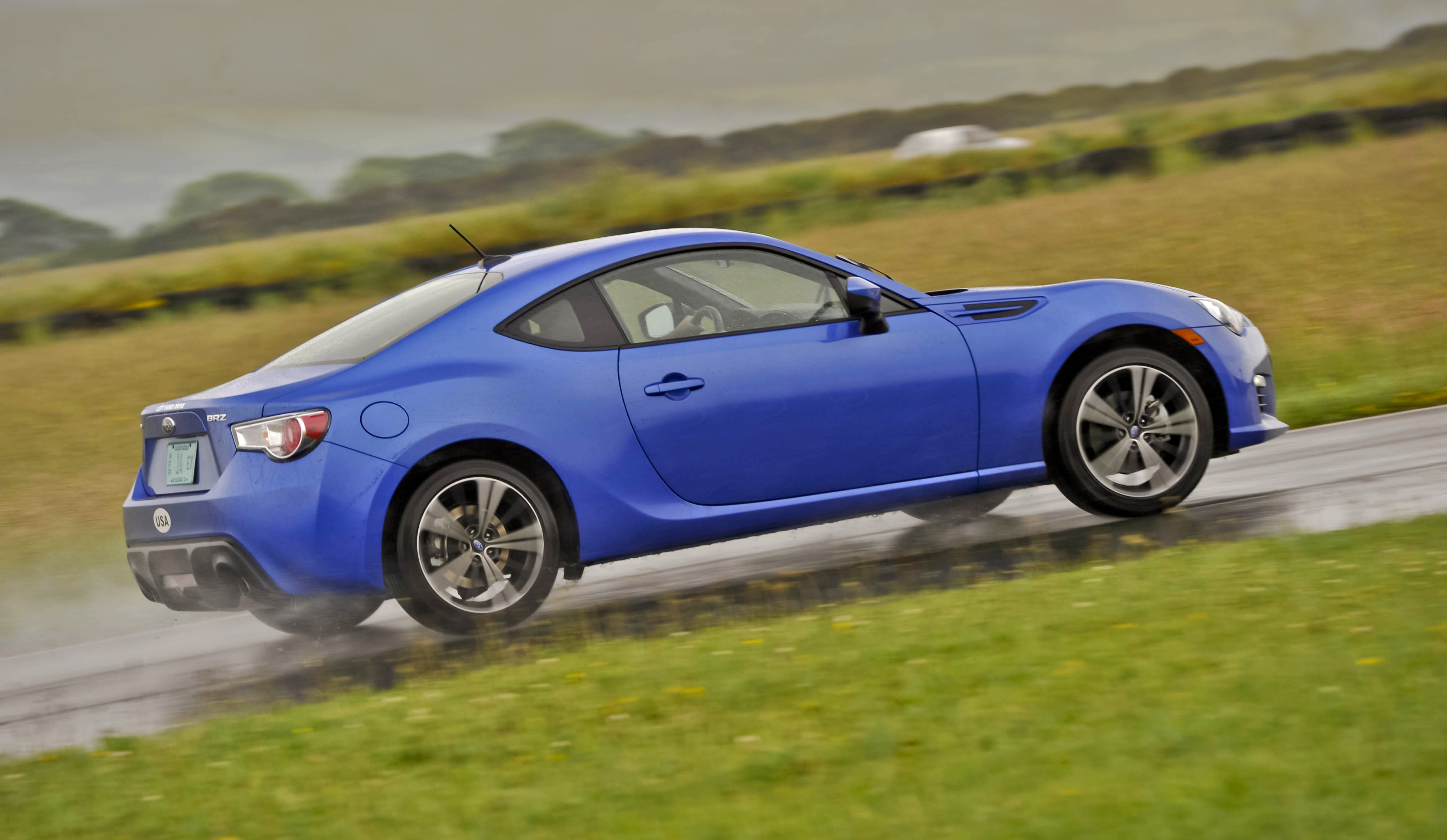 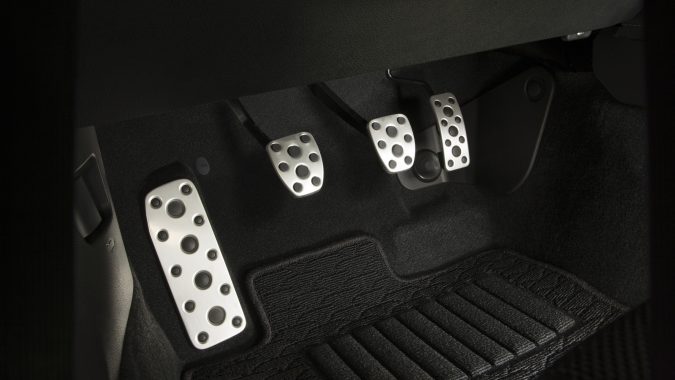 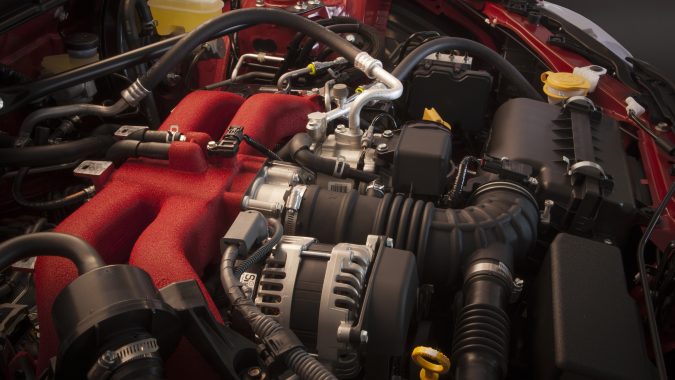 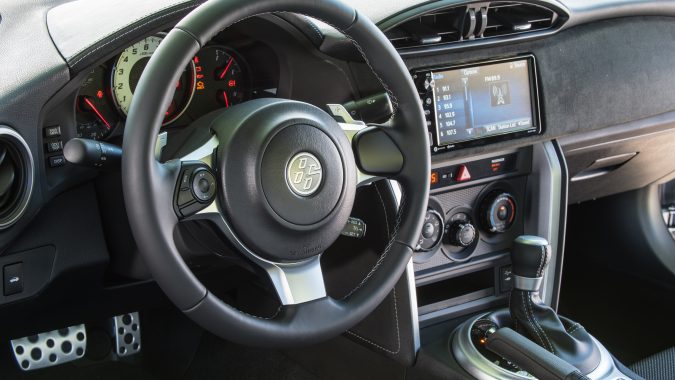 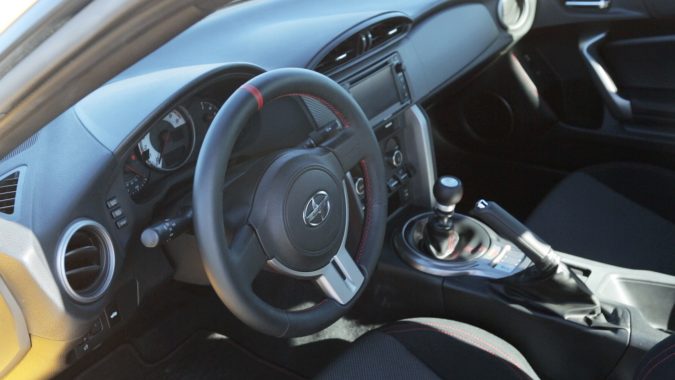