Buick introduced the Encore tallboy hatchback to compete with the Nissan Juke in the emerging micro cute-ute segment with the hope of appealing to Gen X and Y shoppers.

What is it with seniors and youth-oriented brands?

McDonald’s built its business model around kids and teens in the 1970s, only to have its plastic seats filled with elderly posteriors in subsequent decades.

It got so bad in one New York franchise that police have to be called in regularly to disperse the groups of seniors sitting and chatting for hours, while paying customers circle endlessly looking for a vacant table.

Consider that the average new-car buyer is 52 years – okay, not old – but there are several marques that draw considerably older shoppers into their showrooms.

A case in point is Buick, General Motors’ venerable brand that, unlike Cadillac, chose not to use a Led Zeppelin soundtrack to introduce a new model. A Buick buyer averages just over 60 years.

Buick has been working hard to lower that number by attracting younger buyers who might become repeat customers (not that the elderly aren’t; in fact, they can be fiercely brand loyal).

It introduced the Encore tallboy hatchback to compete with the Nissan Juke in the emerging micro cute-ute segment with the hope of appealing to Gen X and Y shoppers. Instead, this happened.

“I have arthritis and some of those higher vehicles just didn’t work for me,” wrote an Encore driver online. “Also, my 77-year-old mom can get in and out of this very easy.”

Arthritis? A mom that’s 77? So much for the youth market. 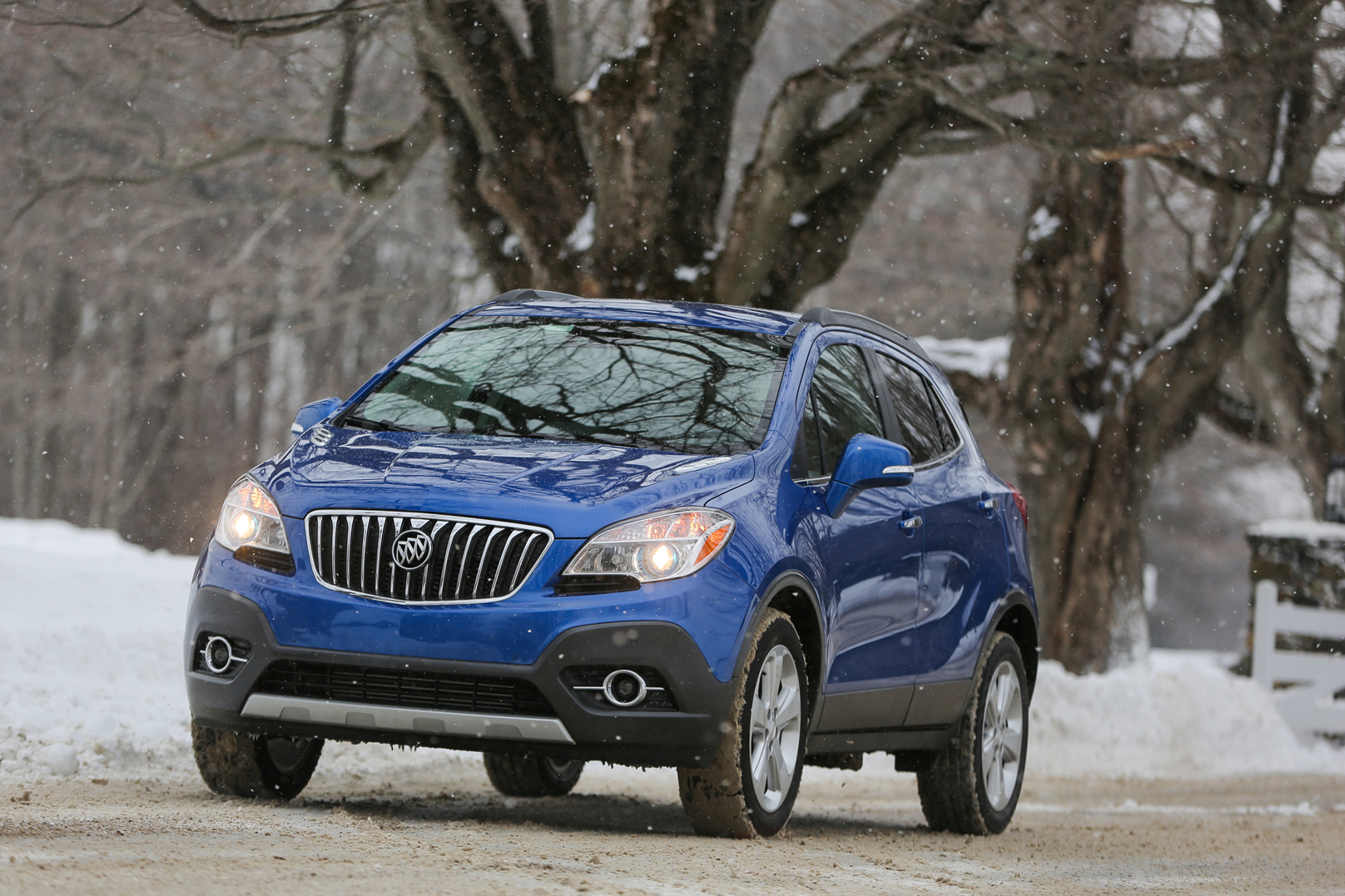 Buick’s first subcompact crossover ute went on sale in early 2013, surprising more than a few people since Buick had the large Enclave as its only other SUV, with nothing in a size medium.

GM Korea (formerly GM Daewoo) was responsible for the development of GM’s Global Small Vehicle architecture, which underpins the Chevrolet Spark, Aveo, Sonic – and the Encore. Trivia geeks will recall that AMC-Renault used the Encore name briefly in the 1980s, glued to the hatchback version of the Alliance sedan.

Compared to the Sonic the wee Buick was a little wider, 24 centimetres longer overall, with a wheelbase stretched 3 cm and a roof that was 13 cm taller. Its dimensions were undeniably small, but the scales hardly confirmed a waif-like presence: the front-wheel-drive version weighed 3190 pounds (1447 kg) while the all-wheel-drive model was 3309 pounds (1500 kg).

All things considered, the Encore offered a decently roomy cabin. Fit and finish were good, with well placed soft-touch materials and bits of wood and metallic accents providing an upscale ambiance. Buick’s standard IntelliLink system and a 7-inch touchscreen dominated the centre stack. The options list incorporated the same high-tech gear that graced the brand’s most expensive models.

Seating was laudably chair-like, which aids entry and egress, especially for those stiffly sprung patrons of a certain vintage. The seats provided a commanding view of traffic – a big reason why tiny SUVs are selling like proverbial hotcakes. The rear seats offered three seatbelts, although three adults would likely avoid sharing the narrow bench. Some owners pointed out that a rear-facing infant seat barely fits. 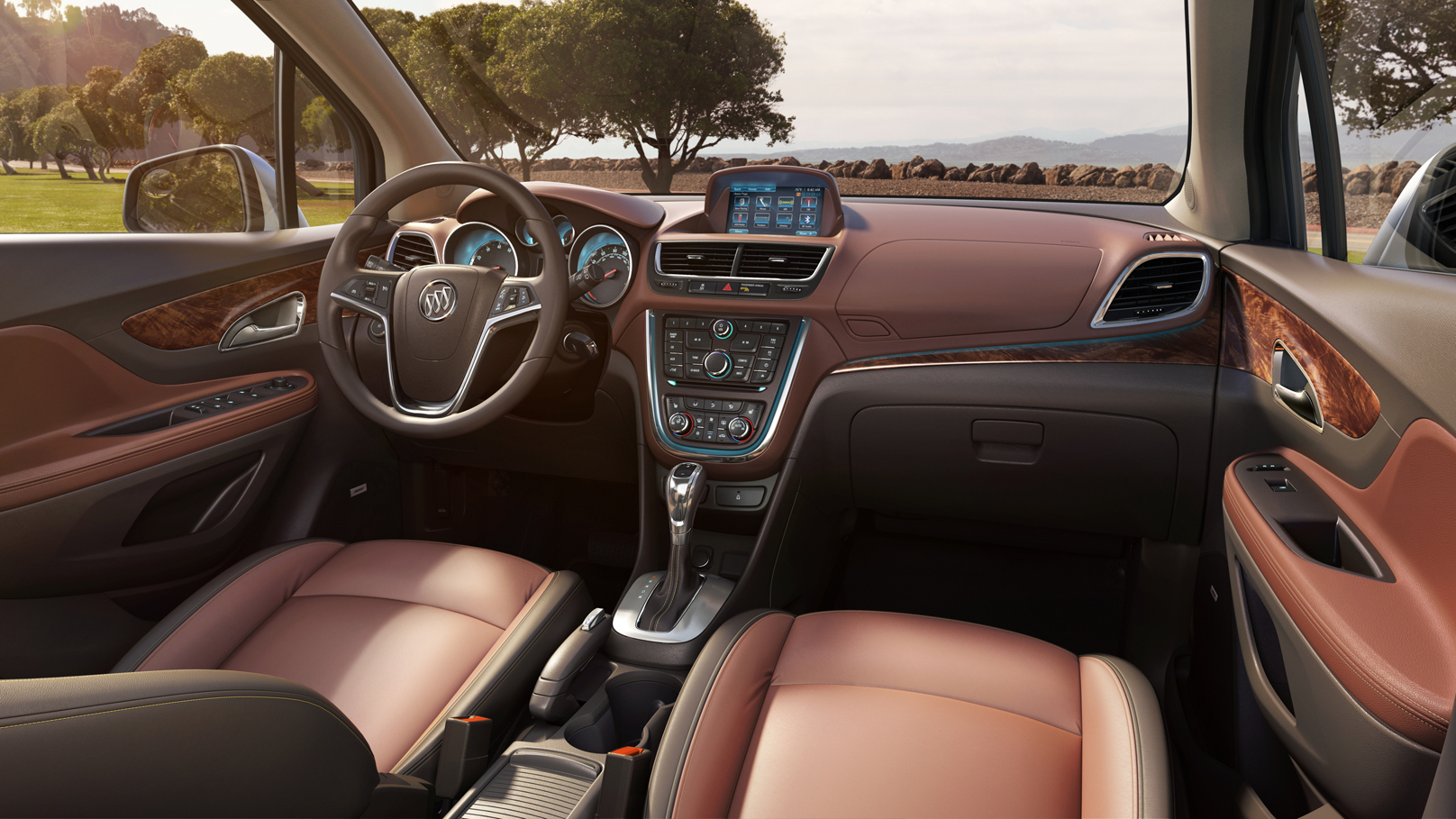 Providing propulsion was an iron-block 1.4-L turbocharged four-cylinder making 138 hp and 148 lb-ft of torque. A six-speed automatic transmission was the only ‘box offered. Like virtually all new vehicles these days, Buick specified an electrically assisted power steering system rather than power-robbing hydraulics.

The Encore changed only a smidge in subsequent years. All 2015 models received standard OnStar service, which included 4G LTE connectivity and a WiFi hotspot. Optional for 2016 was an aluminum 1.4-L turbocharged four, good for 153 hp and 177 lb-ft of torque. The uptick in power was derived from a displacement increase (by 35 cc) coupled with direct injection.

The Encore’s wee turbo can feel spirited, but not so much when there are passengers on board. Zero to 97 km/h comes up in 9.2 seconds in the light front-drive model, and 10 seconds in the AWD version. The new engine for 2016 was hardly worth the effort: it brought the AWD model’s time back down to, well, 9.2 seconds. Competitors like the Mazda CX-3 and Fiat 500X are swifter.

“I can honestly say it needs more horsepower,” one owner posted online. “Going up hills and going into headwinds puts a definite strain on this little engine. And the more it strains the less mpg it gets.”

Small turbos are supposed to pay big dividends at the gas pump, but as the pharmaceutical industry likes to say, results may vary. Some light-footed owners reported very good mileage in the mid- to high 30s (7.6 L/100 km) in mixed driving, while others could scarcely crack 30 mpg (9.3 L/100 km). Gas turbo engines are generally very sensitive to driver inputs.

On the plus side, the crossover’s front-suspension struts and torsion-beam rear axle are tuned to deliver good ride discipline and excellent isolation from lumpy roads. And the little Buick is awesomely quiet, thanks to an acoustic headliner and windshield, triple-sealed doors and spray foam filling every nook and cranny. A Bose active-noise-cancellation system deals with any leftover din. 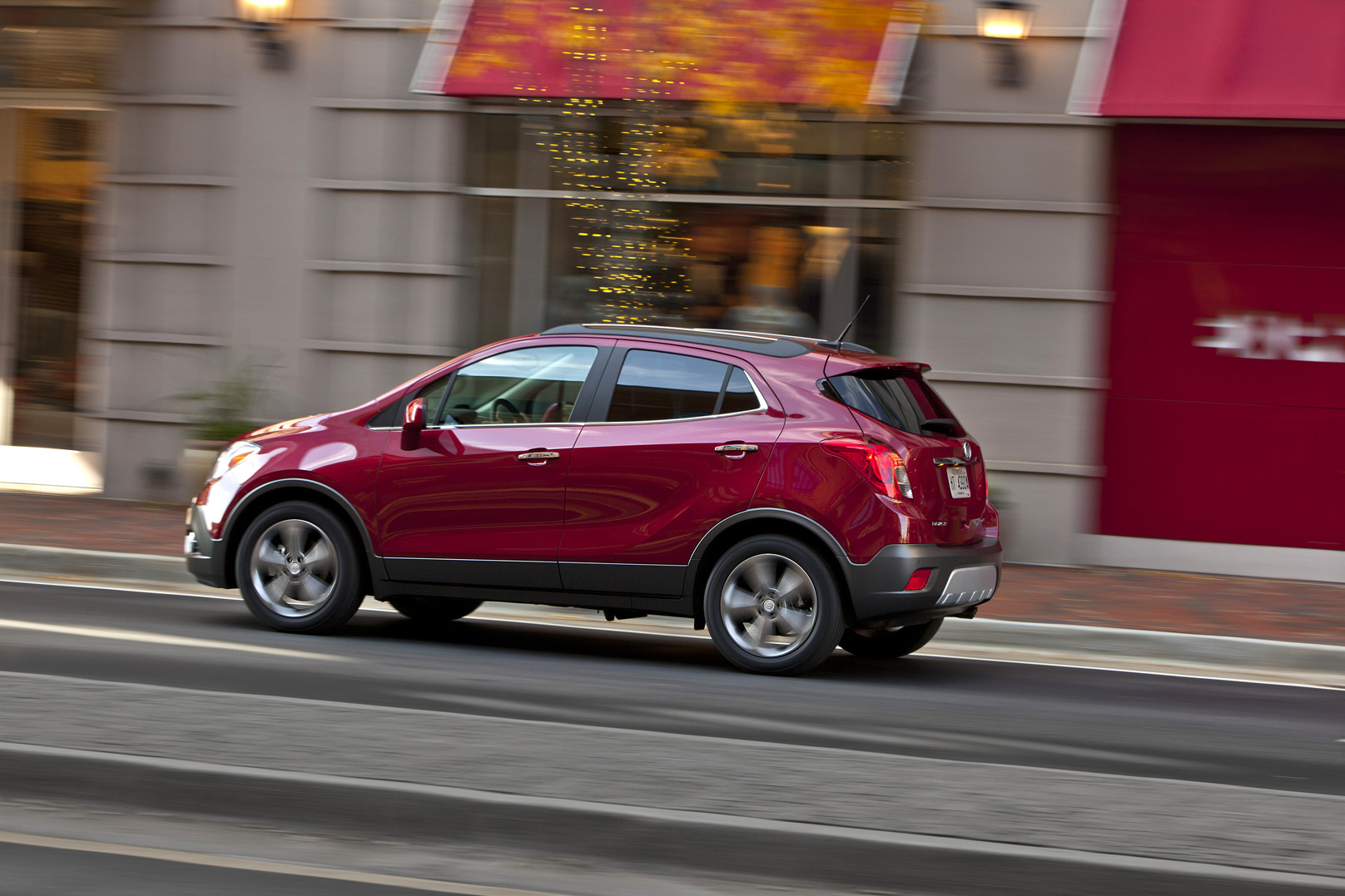 Encore drivers applaud its nimble size and maneuverability, commanding view, the handsome and serene cabin, and decent economy – coincidentally, all values that seniors often hold dear. It’s assembled in South Korea, not the kind of place that springs to mind when you think of the brand.

So what can go wrong in a used Encore? Apparently, not much. The single loudest complaint has to do with the Driver Information Centre display, which can disappear in bright sunlight.

Another oft-mentioned malady involves short-lived batteries, which may be attributed to a phantom drain on the system. Owners who drove their car infrequently reported the most battery issues.

Other mechanical weaknesses include random stalling or reduced power at speed that may be blamed on a bad throttle body, leaky coolant hoses and water pumps, a few bad turbos, and some fussy entertainment and rearview displays.

Certain 2015 Encore and closely related Chevrolet Trax models were recalled for a steering column assembly housing that can contact a printed circuit board. The circuit board may wear over time, causing a sudden loss of electric power steering assist, increasing the risk of a crash.

Overall, the Encore is a valiant effort by staid Buick to break out of its comfort zone and make something more appealing to the younger folk. Yet it suits the oldsters just fine, thank you very much. 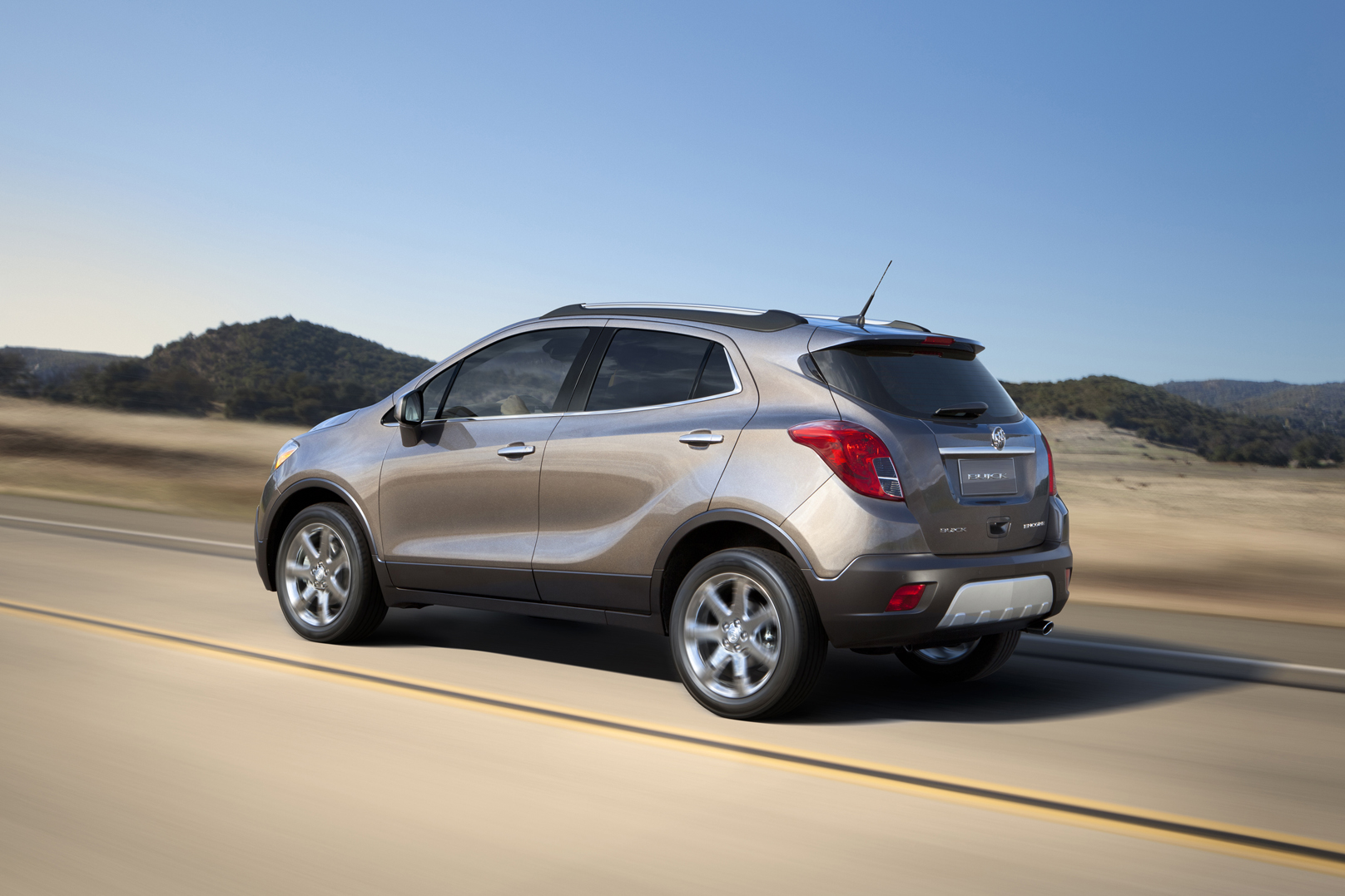