“Dull and anonymous.” It’s not the kind of description that’s going to get you swiped right on a dating app.

The amount of scorn heaped upon the Toyota Camry for being boring to the point of coma-inducing is both abundant and enduring. After more than 30 years, it just can’t seem to shake off its lacklustre character. So why does it sell so well?

“They were okay to drive, but when you had to bring in a Chevy or a Ford for the annual inspection, there was always tie-rods and ball joints to replace and other repairs. You were spending at least $1,500 at every inspection,” the cabbie explained. “With the Camry, there’s a lot fewer repairs.”

Talk to a serial Camry buyer and reliability always comes up as a key benefit of ownership. Auto writers who are perplexed by the Camry’s popularity – it’s been the best-selling car in North America for most of the past two decades – seem to forget that a lot of so-called drivers’ cars are no strangers to shop hoists.

In redesigning the seventh generation Camry, Toyota stuck to its conservative formula – why jeopardize success? – but at least the sedan-only model lost a lot of its rounded styling and gained some sharper creases. Despite a weight reduction of 70 kg, the car’s body dimensions and wheelbase remained unchanged.

The cabin was cast big and commodious – another reason cab companies like it – with subtle tweaks eking out yet more space. The front-seat rails were repositioned slightly forward, and the front seats were made a little thinner, yielding 4.5-cm of additional knee room in the rear seat. Three-across seating is comfortably accomplished back there.

Material quality had supposedly improved – evidence that Toyota is moving away from its previous predilection for cost cutting. However, fake brushed-aluminum trim moulded out of plastic still doesn’t telegraph greatness. 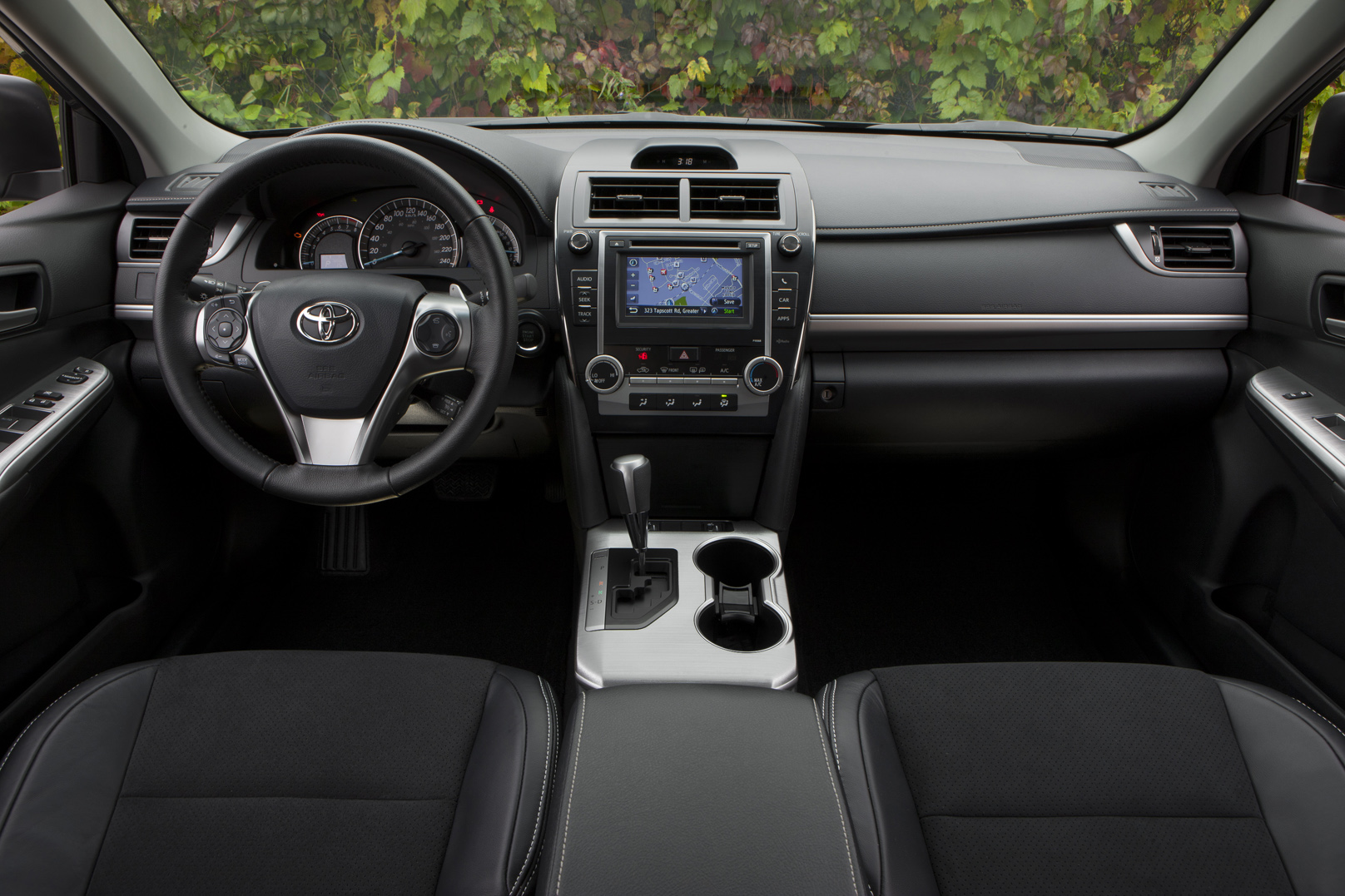 “The new seats are smaller, tighter, thinner, harder… and the low quality plastic on the dashboard and door panels is an embarrassment!” griped one owner online.

Mechanically, Toyota stuck with what works; in this case, two well-traveled engines: a 2.5-L four-cylinder that produces 178 hp and 170 lb-ft of torque, and the ubiquitous 3.5-L V6 that generates 268 hp and 248 lb-ft of torque. Both are the epitome of buttery smoothness, working through a conventional six-speed automatic transmission (the manual gearbox was nixed). 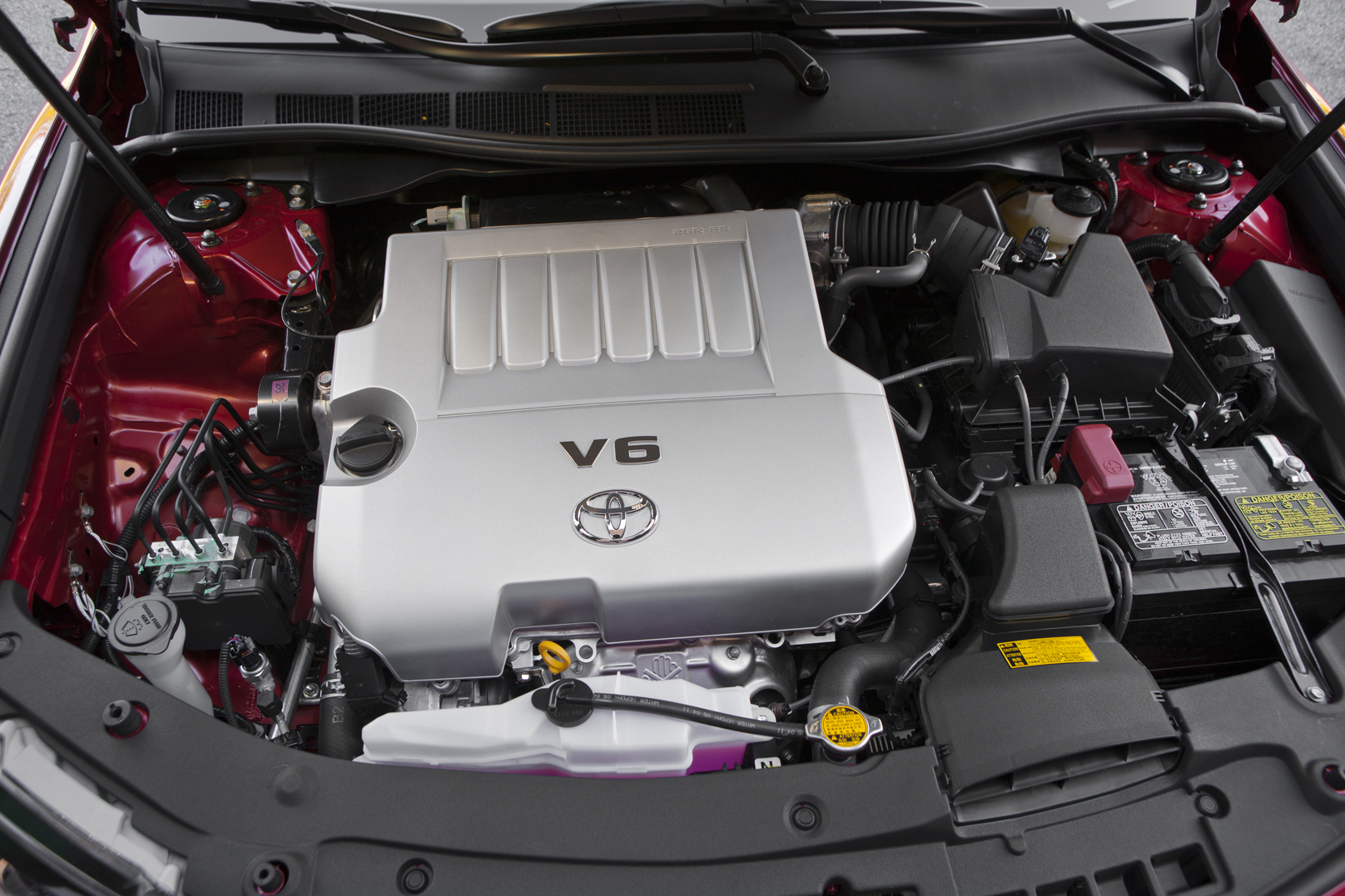 The Camry was reskinned for 2015, a process that usually takes four or five years, but given the hyper-competitive state of the market the Camry went under the knife early. Its sculpted profile endowed the Camry with a more harmonious and premium look.

The cabin dimensions remained the same, but what changed were the furnishings, including redesigned switchgear, upgraded gauges and the standard Entune touchscreen interface. Toyota made significant improvements to the body structure and suspension. The result is a more controlled and confident driving experience without sacrificing the Camry’s pillowy ride. 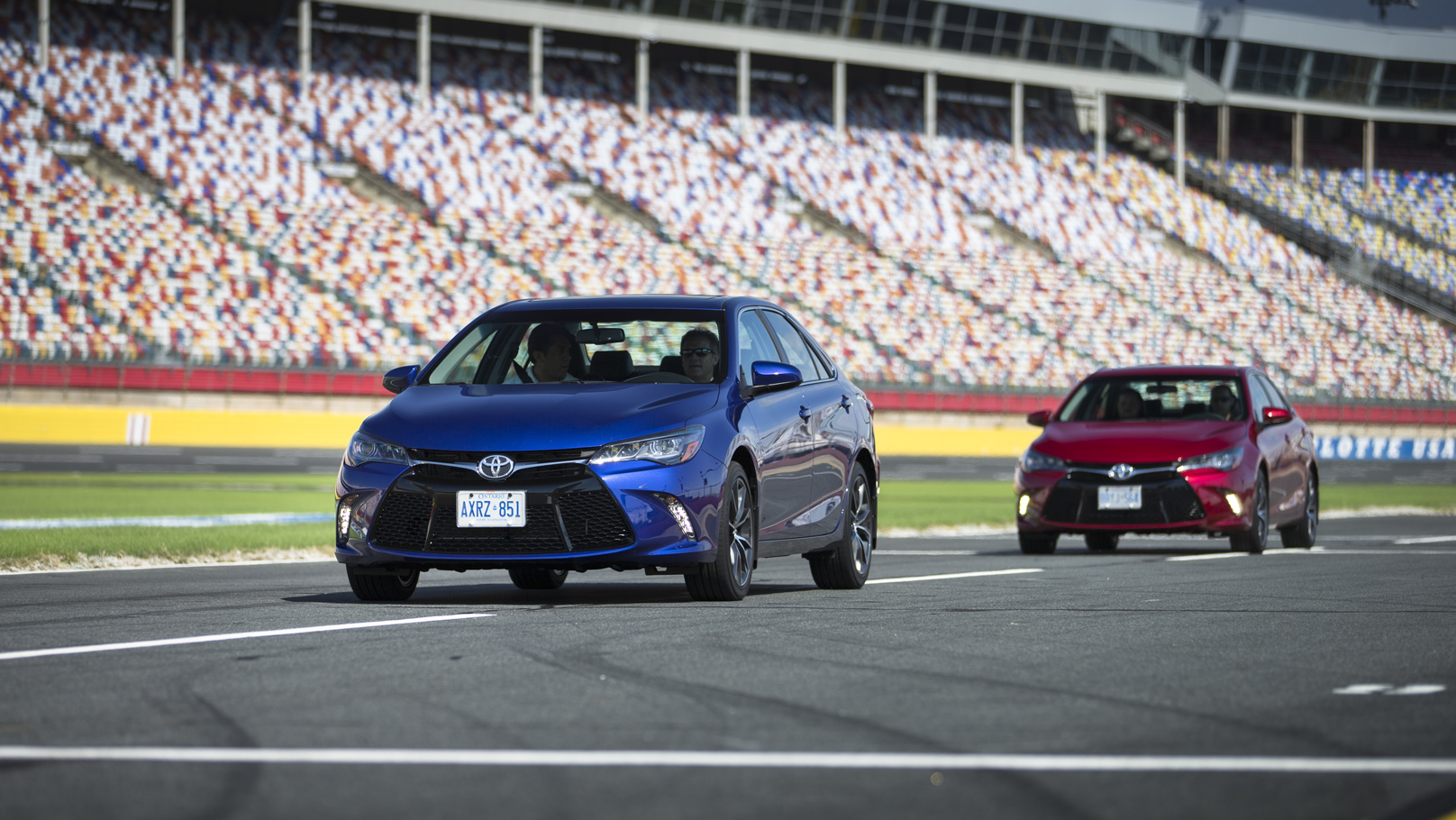 The base Camry is unexceptional with its numb electric steering, average braking and uninspired handling – which is just the way most Camry owners like it. The car’s hushed ride is especially coveted. For everybody else, an SE model with a firmer suspension and faster steering gear delivered slightly better driving satisfaction. Still, not everyone was happy.

“While driving at highway speed, the car wanders left or right. Keeping the car straight takes significant effort without constantly making corrections to the steering wheel,” noted the owner of a 2013 model.

Zero to 97 km/h comes up in a ho-hum 8.2 seconds with the four cylinder engine, and a very respectable 5.8 seconds with the 3.5-L V6. It’s worth noting that the V6 is disappearing in the mid-size sedan segment, making the Camry V6 a genuine sleeper (a good thing). The revised Hybrid model can do the deed in a palatable 7.3 seconds.

Fuel economy in any of the Camry models is quite good, say owners. Even the V6 can generate good numbers with a light throttle and get away from traffic congestion.

As noted earlier, the Camry generally doesn’t break. In the just-released J.D. Power 2017 Vehicle Dependability Study of three-year-old models, the 2014 Camry was ranked highest in dependability in the mid-size segment – quite an accomplishment for the highest volume selling automobile in North America.

Demand for the model is such that Toyota had to start an assembly line at Subaru’s Lafayette, Indiana, plant (Toyota is part owner) in addition to the booming Georgetown, Kentucky, facility. The Camry was crowned the most “American-made” car in 2015 with more than 75 per cent of its parts and manufacturing sourced in the U.S.

While the Camry receives huzzahs from plenty of owners, there are a few common complaints that circulate on the Internet. Perhaps the most oft-repeated concern has to do with the air conditioning system, which can spew a mouldy odour.

“I was told at the time that Camrys are known for that issue. The unit was cleaned, but I was told it was just a temporary fix. When I turned the air on this spring, the smell was back even worse than before,” observed one unhappy owner.

A few drivers have noted a torque converter shudder under light throttle, as well as a hesitating transmission at some of the most inopportune times.

“Vehicle hesitates at random times; this is especially dangerous when making a left turn at a busy intersection,” observed one driver. Dealers usually prescribe software updates and may install a new torque converter, if all else fails. Still, transmission faults are rare.

Despite the grievances, the Camry impresses with its sterling reliability and low maintenance regimen. Yup, bland works. 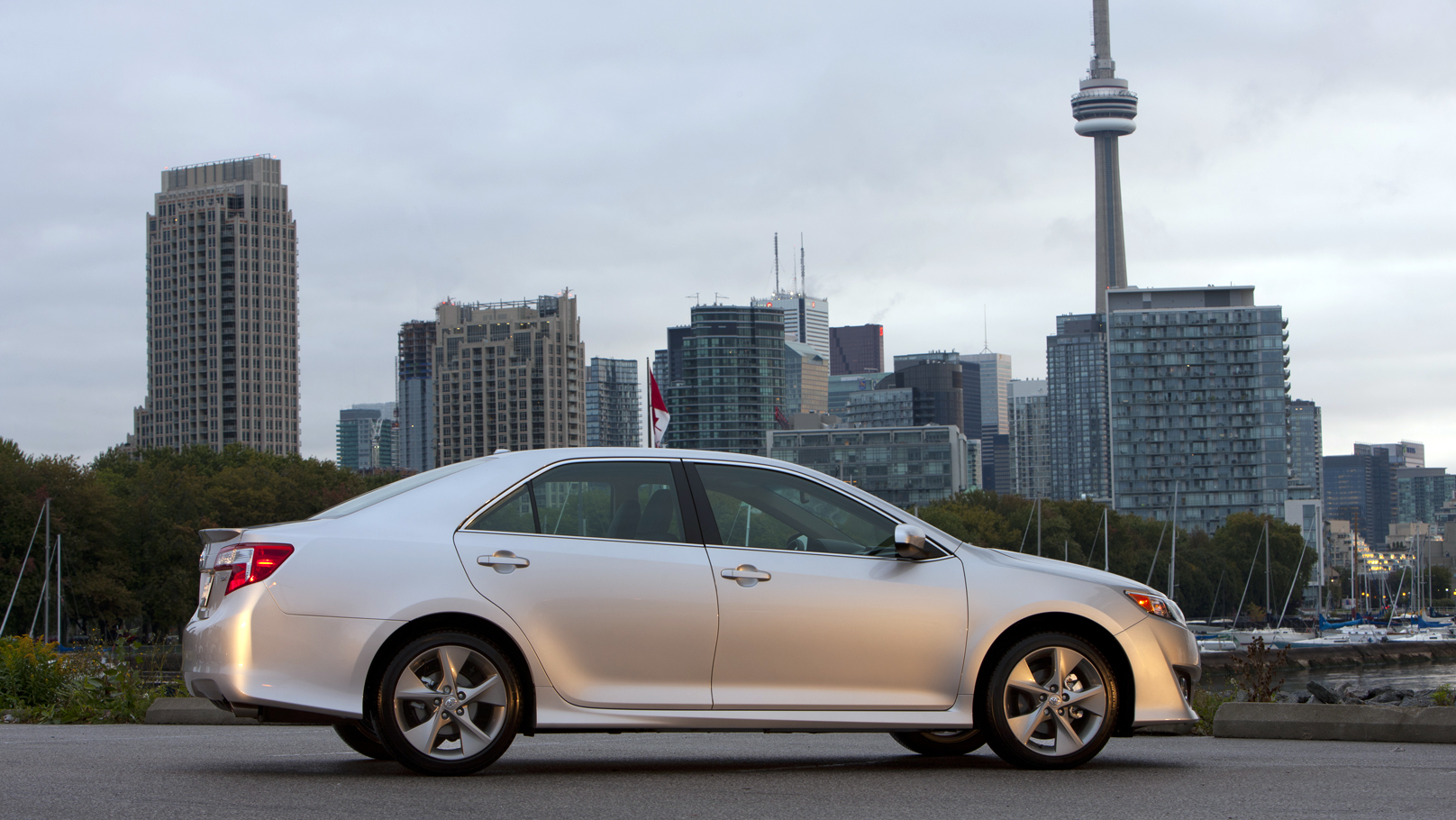