Mechanically, the Impreza tends to uphold the automaker’s reputation for quality, but for two exceptions that should not be ignored by used-car shoppers.

Walter Braeckow was the sad owner of a broken Volkswagen Vanagon whose water-cooled pancake engine had given up the ghost, gushing coolant like Niagara Falls.

Walter had heard that a flat-four engine out of an old Subaru Legacy made a dandy replacement. Unfortunately, it also happened to be the engine of choice for ultralight plane builders at the time, making one hard to come by.

As Walter explained this to me, he kept an eye cocked skyward, seemingly waiting for a homemade flyer to nosedive to the ground.

Such is the appeal of quirky Subaru. Originally an airplane maker, it spawned a weird little car in 1958: the Subaru 360. Naturally, it had adopted a lot of aircraft technology, such as its horizontally opposed “boxer” engine, monocoque construction and plenty of plastic components – a rarity at the time.

Subaru’s devotion to the boxer engine – prized for its low centre of gravity, inherent second-order balance and longitudinal orientation – is legendary. Subie has overcome poor odds as a relatively small automaker to grow into a success today, thanks in part to its reputation for dependability.

So why do so many Subaru owners watch over their dipsticks obsessively?

“I was informed that my engine is a quart low on motor oil (0W20), and that this is normal because 2.0-L FB engines burn a quart of oil every 1,200 miles (1,930 km) at the most,” reads a fret online. “This is absurd, I am a former ASE certified mechanic and this was not something I thought to be normal.”

Despite the Japanese automaker’s reputation for quality, it’s gaining notoriety these days for something else: voracious oil consumption. Has Subaru’s constellation of stars lost some of its lustre? 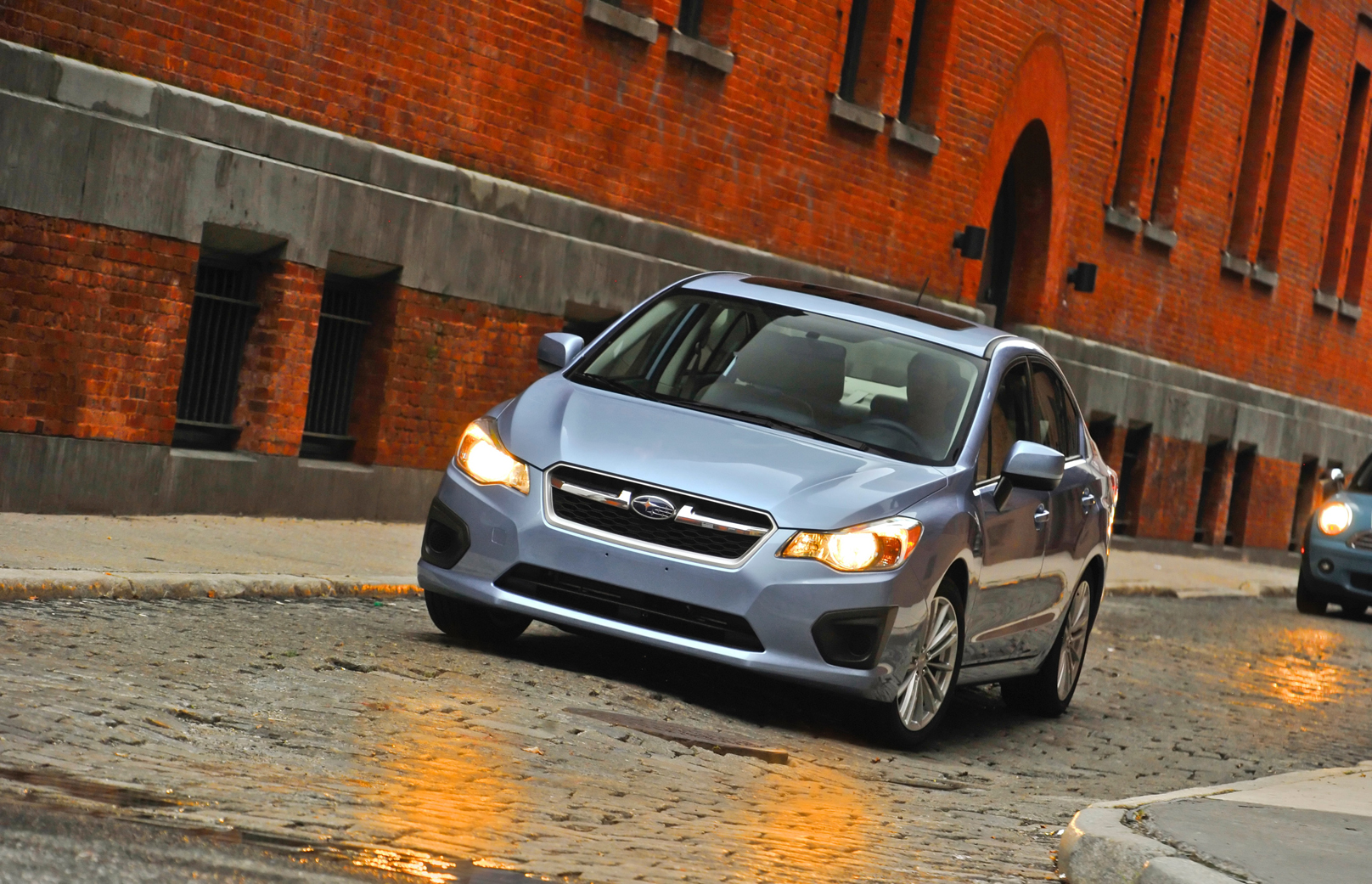 All new for 2012, the fourth-generation Subaru Impreza is an example of an automaker’s entry-level product moving considerably upmarket to within pinching distance of its mid-size offering, in this case, the virtually unknown Legacy. The Impreza’s carefully honed, international shape – with its defined wheel arches, sweeping headlamps and large greenhouse – proves there’s a certain elegance to spare lines.

While retaining the four-door sedan and five-door hatchback configurations, the cars are almost exactly the same size as the outgoing models – save for the wheelbase, which grew just over 2 centimetres to improve rear legroom. The hatchback gained a few more cubes of storage in the redesign. Significantly, the Impreza lost about 70 kg of unsightly fat, which should net improvements in terms of acceleration and fuel economy.

Inside was a somewhat austere cabin filled with good-quality materials, but little to imprez passengers (sorry). Owners reported the sound system is sorely lacking in terms of punch. At least the base model came with decent standard kit, including heated front cloth seats. The windows are bigger, so sight lines have improved – addressing a common concern of older drivers. 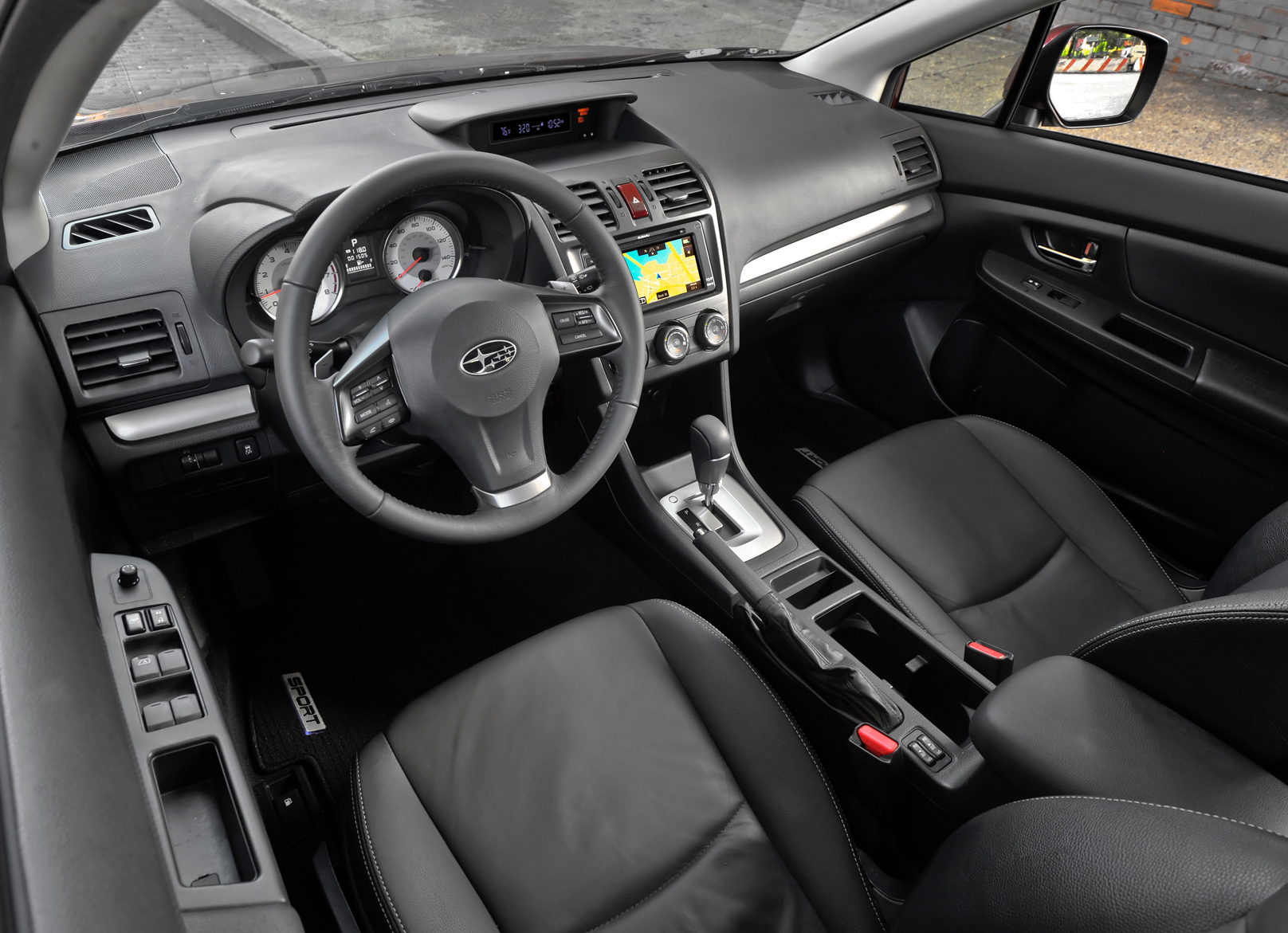 The biggest change can be found under the hood. The latest version of Subaru’s flat-four engine shrank to 2.0 litres (down from 2.5), but there was a 28-percent reduction in friction, thanks to lighter pistons and other refinements, so there’s efficient power – 148 horses – and 145 lb-ft of torque on tap.

The engine downsizing was required to help Subaru meet tightening fleet fuel efficiency numbers, the same reason for the adoption of a continuously variable (CVT) automatic transmission in place of the old four-speed slushbox. It’s chain-driven for those who’re still skeptical about the technology. Fortunately, Subaru remains a purveyor of the tried-and-true manual transmission – but with five, not six, forward gears. 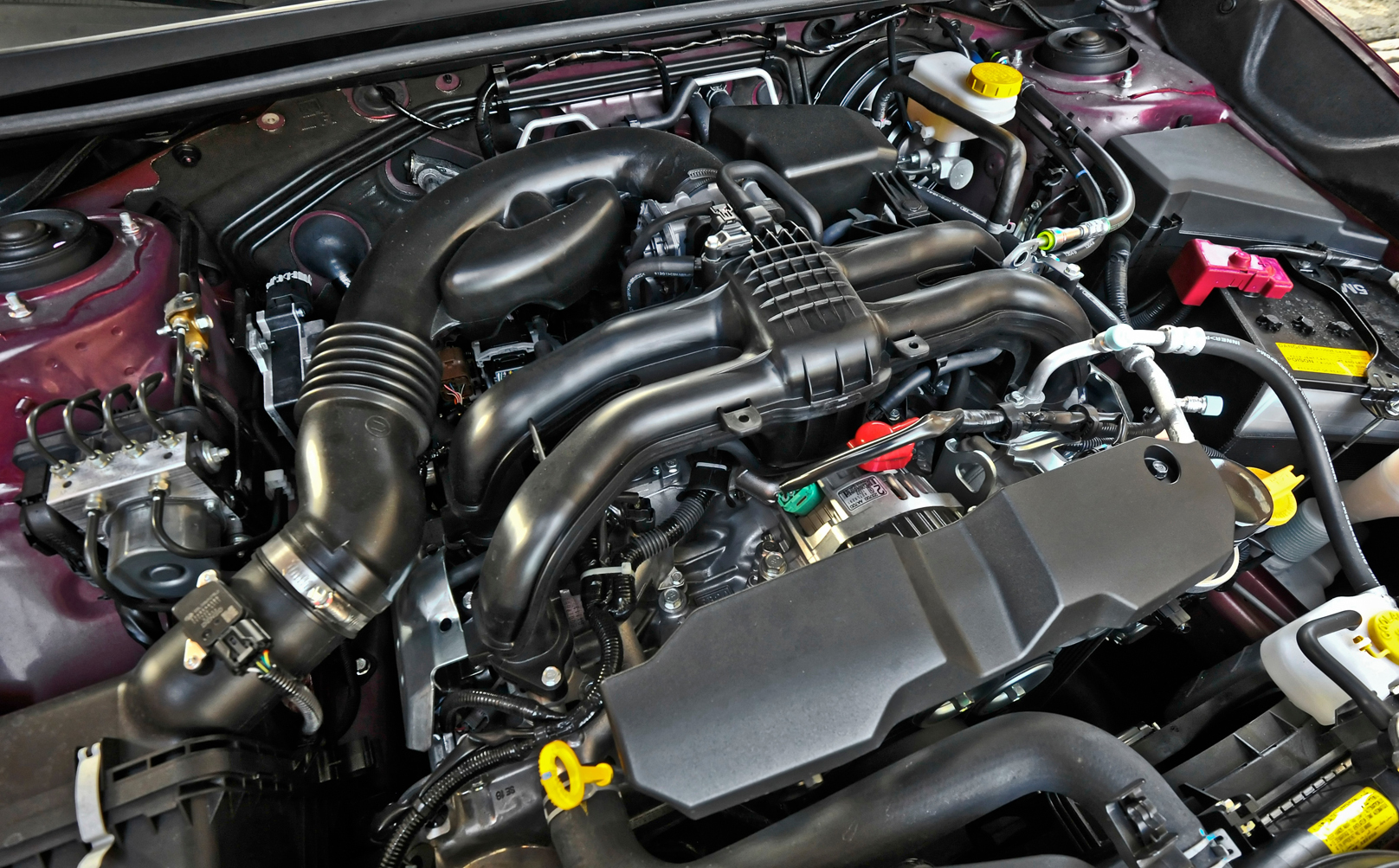 Subie’s famed “symmetrical” all-wheel-drive system came standard, and is responsible for making the Impreza feel remarkably planted on the road. The symmetry is derived from the pancake engine; its north-south orientation allows the output shafts to be equal length. Throw two wheels onto a gravel shoulder and the car continues to track straight and true.

The Impreza received a bunch of nominal equipment changes in subsequent model years, starting with standard Bluetooth, iPod connectivity and steering wheel audio controls for 2013. A rearview camera became standard in 2015, along with a few styling tweaks and additional sound insulation.

Throw two wheels onto a gravel shoulder and the car continues to track straight and true.

Despite considerable engineering effort, the 2012 Impreza was actually a slower car than its predecessor, taking 8.6 seconds to reach 97 km/h with the stick (9 seconds with the CVT) – a full second more than the old 2.5-L four could muster.

The car’s electrically assisted steering was calibrated to give the pilot a good sense of the road with a reasonable effort buildup off-centre. The steering is precise in the corners and requires only a light touch at the wheel to keep it tracking straight, although some drivers found its lane discipline wanting. 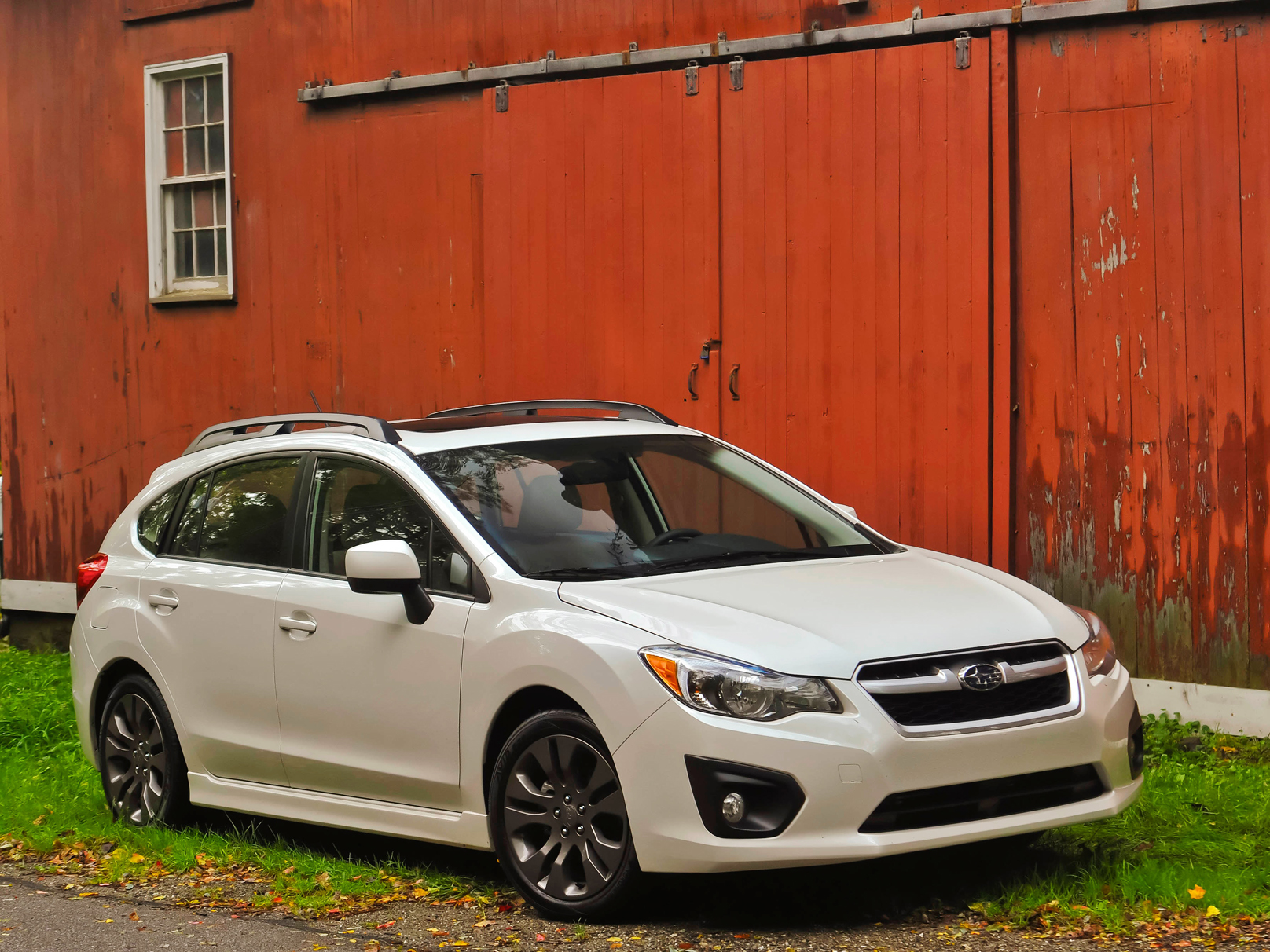 “If you drive on the highway every day, you will notice it is very twitchy at higher speeds and is very sensitive to side winds,” wrote the owner of a 2015 model. At least the ride quality is exceptionally good for a small car.

The flat-four engine continues to provide its signature exhaust note, which seems unusually pronounced in the fourth-gen models. Plenty of owners commented on the car’s rather loud comportment, which led to the sound-deadening improvements.

At least the smaller engine is more frugal in terms of fuel usage, although averaging 29 or 30 mpg (9.4 L/100 km) is hardly exemplary for an economy car. Blame Subaru’s all-wheel-drive system, which is always on, delivering power to all four wheels in various amounts. That’s the price of sure-footed traction, unfortunately.

Whether driving the sedan or hatchback, Impreza owners applaud the car’s weather-beating all-wheel-drive system, its secure handling, comfort, good all-round visibility – and some even claim the little Subie is fun to drive. Sour notes include the sleepy acceleration, road noise and lousy stereo.

Mechanically, the Impreza tends to uphold the automaker’s reputation for quality, but for two exceptions that should not be ignored by used-car shoppers.

As noted in our intro, the new FB-series 2.0-L flat-four engine used in the Impreza has gained a reputation for being an oil burner. Even seasoned Subie owners have become concerned about an engine that consumes one, two or more litres between scheduled oil changes.

“The car burned oil at an alarming rate. One dealer claimed there was nothing wrong, then a second finally agreed there was an issue after the car failed an oil consumption test. They replaced the entire engine under warranty,” wrote the owner of a 2012 model.

That’s what should happen. While some dealers have dismissed oil consumption concerns as “normal,” there’s nothing normal about a dry dipstick between oil changes. Consumer Reports is adamant on this point: “Any engine that burns oil between changes should be repaired under the powertrain warranty.” (CR cites Audi and BMW as other problem engine manufacturers.)

The second problem with the Impreza involves the front passenger seat sensor, which can falsely disable the airbag while a passenger is occupying the seat – an unsettling hazard, owners suggest.

“When a passenger is sitting in the seat while driving, the airbag sensor doesn’t recognize the passenger’s weight, and the airbag light will not turn on, putting my passenger at risk,” reads a common post.

Reportedly, the fault may be caused by moisture on the seat (such as snow covered pants) or even a cellphone left on the seat. Dealers are working through fixes, though the episodes have left some owners second-guessing their safety.

Overall, the Impreza is a unique and well-engineered vehicle, especially for the econobox segment it competes in, but we have reservations about the boxer engine’s thirst for oil. The manufacturer’s supposed norm is not ours. 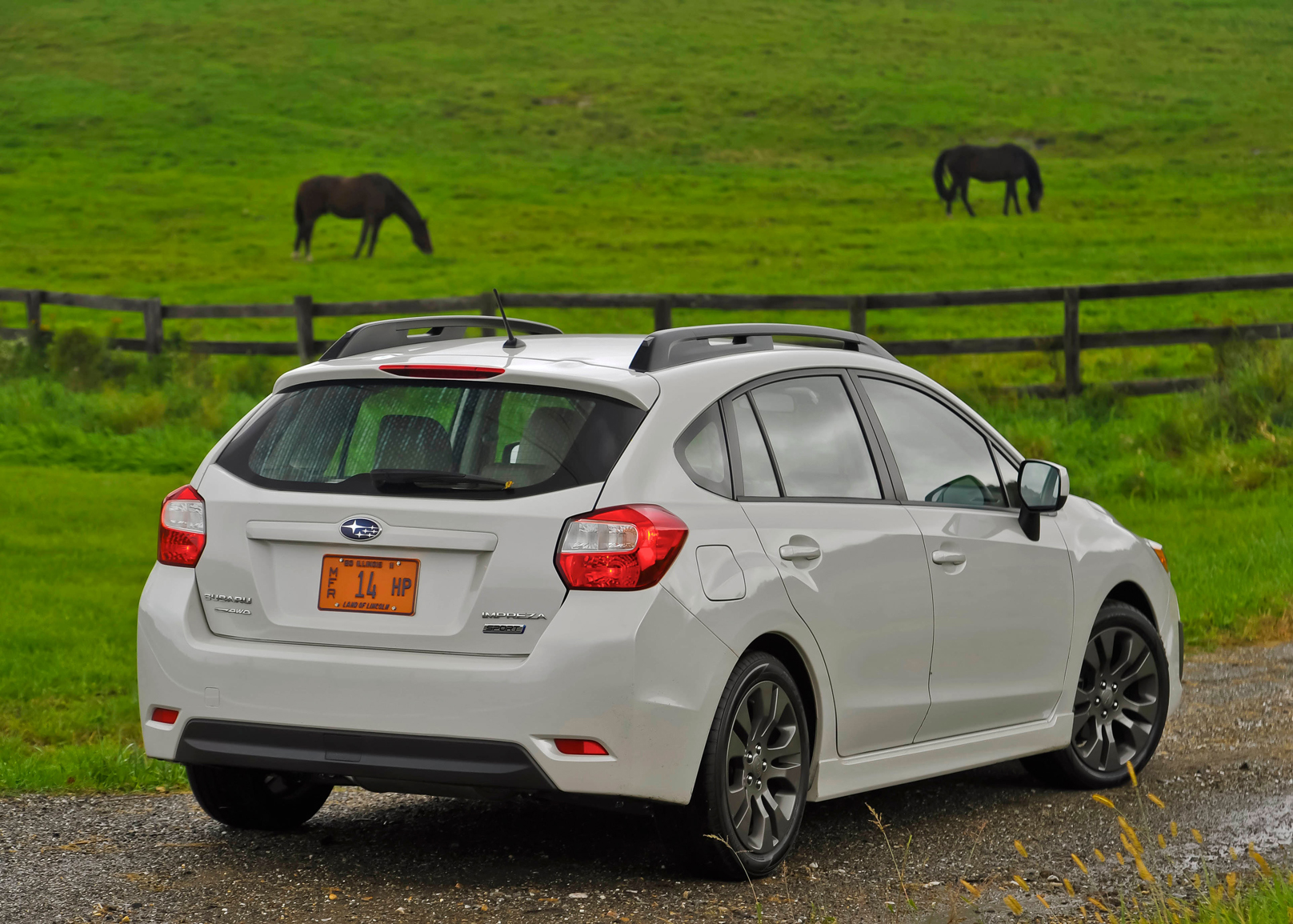