Unlike the reshaped Ford Mustang and reconstituted Chevrolet Camaro, the Challenger faithfully traced the lines and proportions of the 1970-74 original.

Squatting on their fat haunches and meaty tires, Dodge Challengers emerge from their winter slumber by mid-April around these parts, the rumble of Hemi V8s roiling the night air.

Think of the Challenger as a hairy-chested, 1860-kg spring peeper.

Subtlety is not something Chrysler was going for when it reanimated the Challenger after 35 years. Unlike the reshaped Ford Mustang and reconstituted Chevrolet Camaro, the Challenger faithfully traced the lines and proportions of the 1970-74 original.

“Teenage son and friends are drooling, and middle-aged guys come up to me at the laundry, gas station, parking lot, whatever, asking about it,” reads a post by one owner.

“If you want to fly under the radar, don’t buy this car,” advised another pilot. Some keep a cloth handy to wipe off the fingerprints and the hot tears of envy. 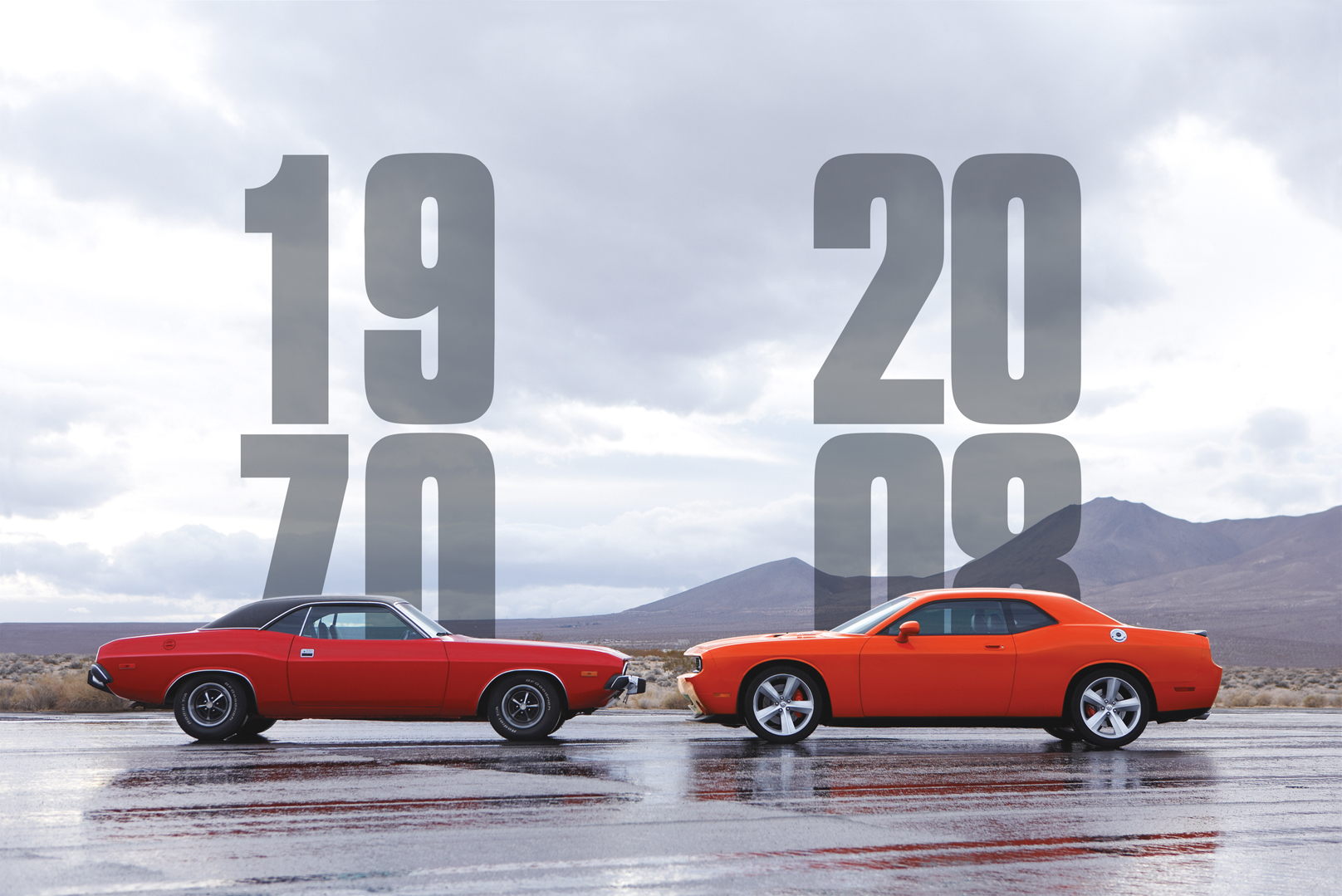 The all-new-for-2008 Challenger came about fairly easily, relatively speaking. It was a matter of shortening the Chrysler LX (Chrysler 300, Charger, Magnum) wheelbase by 10 cm and stretching some familiar and comely sheetmetal over the rear-drive chassis.

Being the lovechild of DaimlerChrysler, the LX incorporated some Mercedes-Benz components including a five-speed automatic transmission, control-arm front and multi-link rear suspension, rack-and-pinion steering and electrical architecture.

All 7,119 Challengers assembled at Chrysler’s Brampton, Ont., plant for 2008 were SRT8s equipped with a 425-hp 6.1-L Hemi V8 tied to the five-speed automatic. America got 6,400 cars – all pre-sold in a frenzy – while Canadians received some 670 SRT8s uniquely badged as the Challenger 500. Consider them collector cars now.

The LX platform’s generous dimensions gave the two-door coupe a spacious interior that could seat five adults in surprising comfort (try that in a Mustang). The bucket seats were broad and forgiving, seemingly tailored for aging, wide-bodied Boomers. 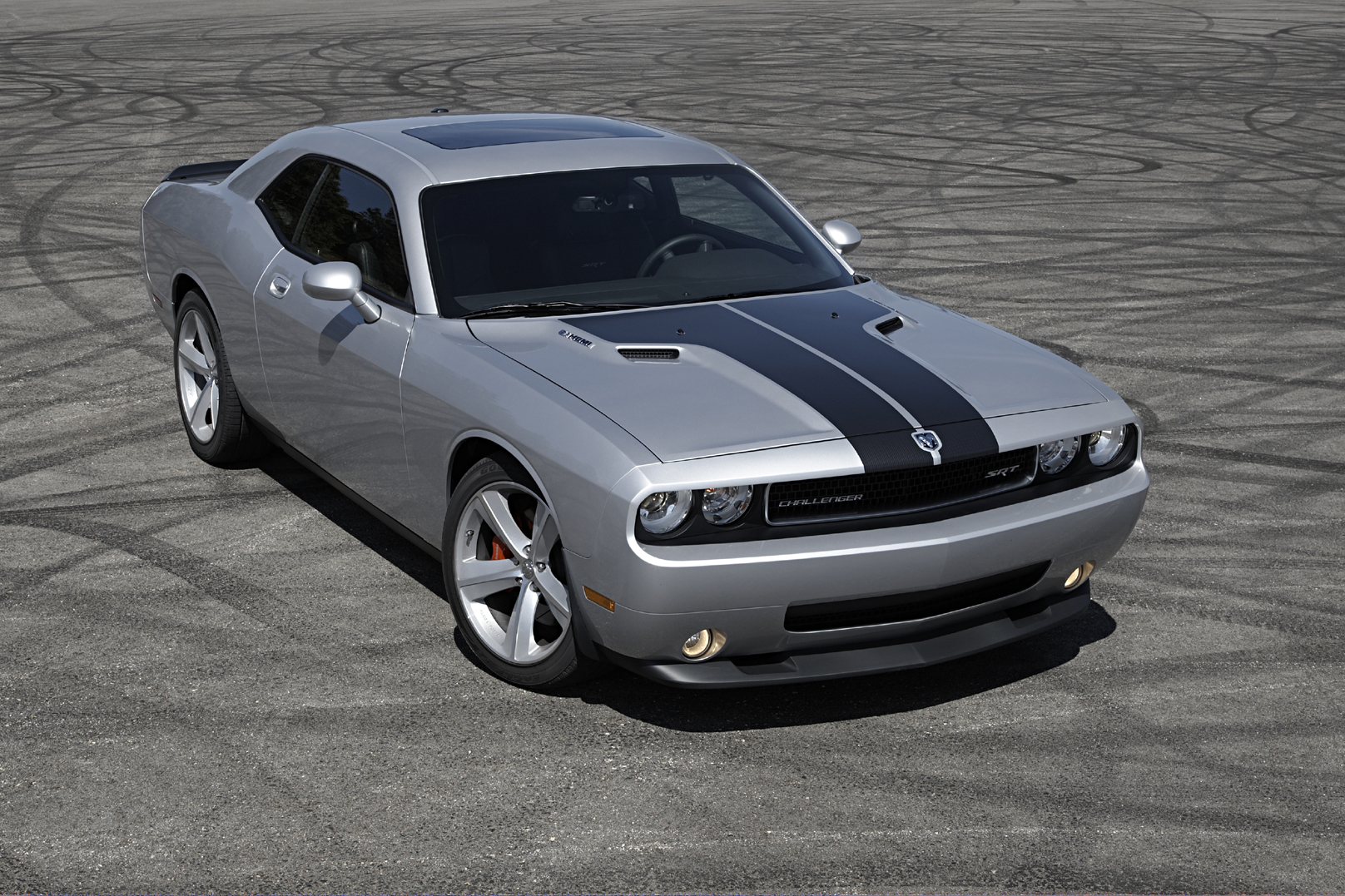 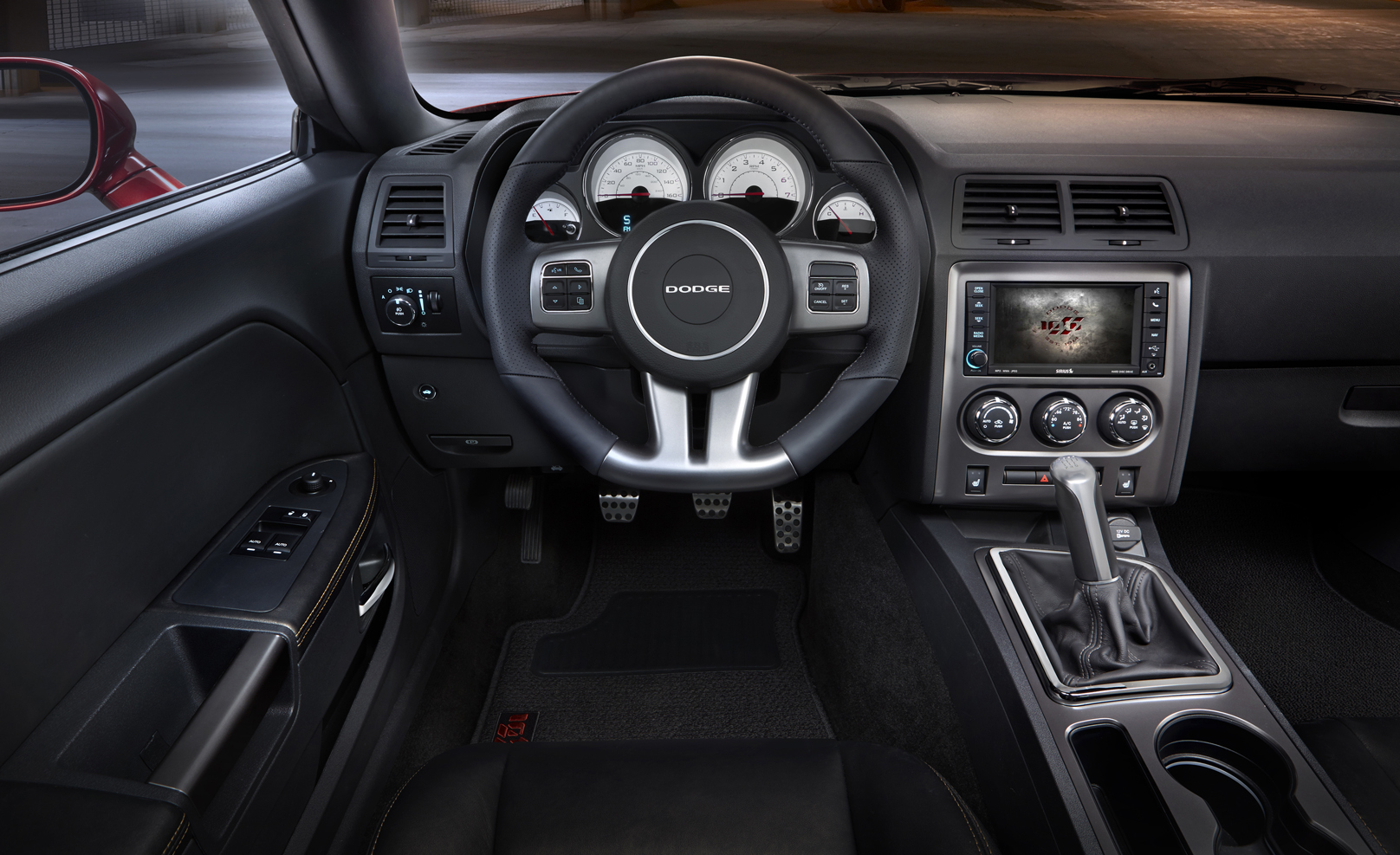 Stylists unfortunately hadn’t spent as much time and effort on the coal-black interior as they did on the exterior. The cabin was rental-car bland and plasticky, while the massive C pillars obscured the view out the back and sides.

“The headliner sags a little and, like other reviews noted, the passenger door is the only way to access the back seat,” complained one owner online.

The full model lineup – SE, R/T, SRT8 and Canada-only SXT – arrived for 2009. The full-bore SRT8 received an optional six-speed manual gearbox and limited-slip differential, while the R/T got a 5.7-L Hemi V8 making 372 hp with the five-speed autobox, or 376 hp when mated with the Tremec six-speed stick.

The 5.7 featured Chrysler’s Multi-Displacement System, available with the automatic only, which deactivated four cylinders under light throttle conditions to save fuel. The base model SXT made do with a tepid 3.5-L V6 making just 250 hp, coupled to a budget four-speed slushbox. 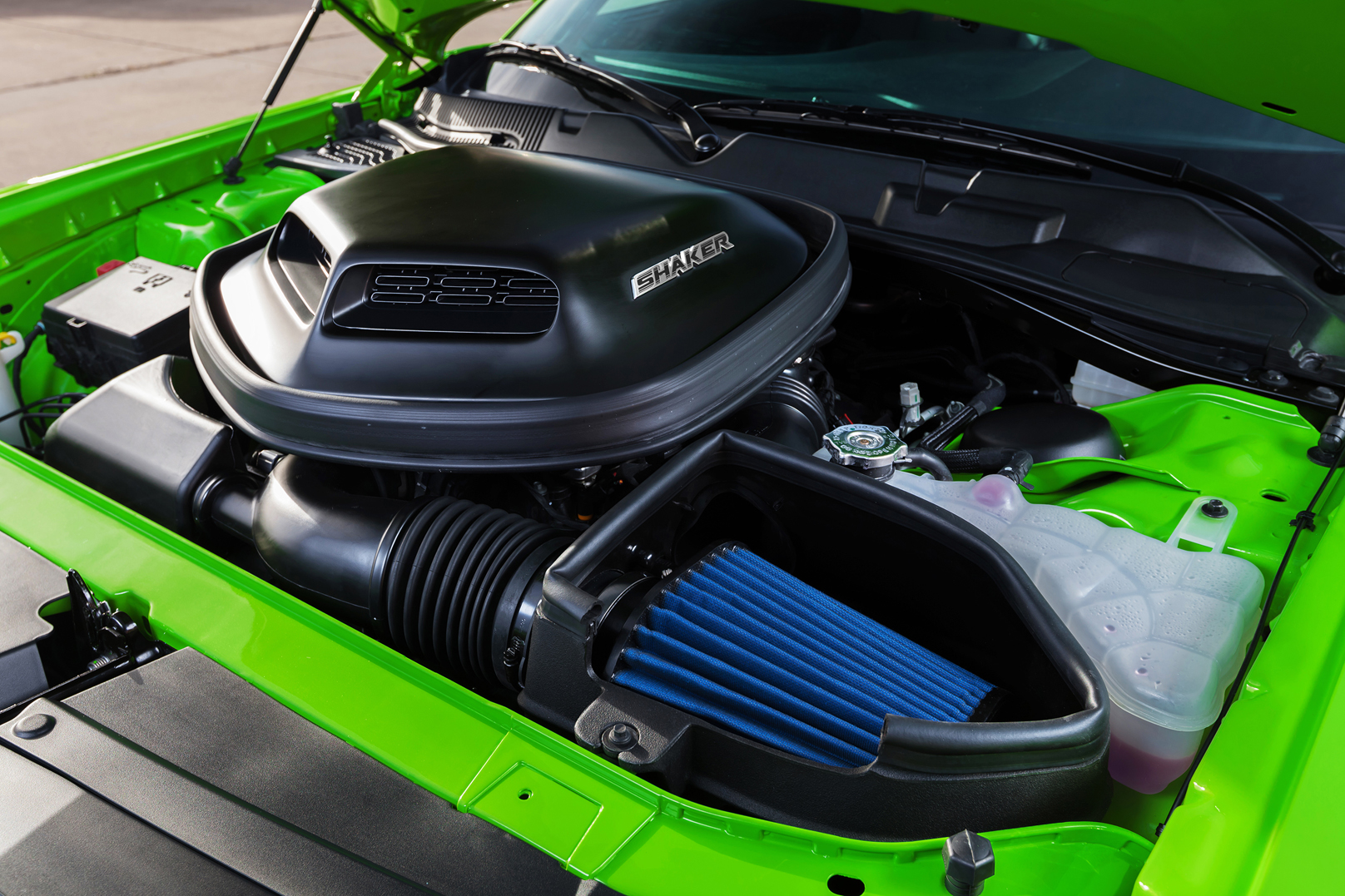 The 2010 Challengers were largely unchanged, although the five-speed automatic finally trickled down to the six-cylinder models. With retina-burning hues being part of the car’s retro appeal, the limited edition “Plum Crazy” purple finish was an instant hit. Missing from the palette were Harvest Gold and Avocado Green, both popular colours in 1970 – for refrigerators.

For 2011 all Challengers received extensively modified suspension, steering and brakes, resulting in a more rewarding drive. Base models got the new 305-hp 3.6-L Pentastar V6 to replace the weakling 250-hp V6. SRT8 392 versions got a 470-hp 6.4-L V8, which replaced the 425-horse 6.1-L. There was also more standard equipment, along with reshaped seats and a smaller steering wheel.

The Challenger earned another overhaul for 2015 when all models got fresh styling tweaks, a greatly renovated interior and a new ZF-designed eight-speed automatic transmission. Headlining the news was the new Hellcat, which used a supercharged V8 engine that put out a groundshaking 707 hp. The normally aspirated SRT 392 made a new total of 485 hp.

Mash the SRT8’s go pedal and the Challenger could lunge to highway velocity in 4.8 seconds, thanks to the 420 lb-ft of torque on tap. The slightly less potent 5.7-L Hemi could do it in 5.1 seconds with the six-speed manual. This despite the fact the Challenger was too big and porky to be a pony car, weighing 255 kg more than a Mustang GT and 120 kg more than the plus-sized Camaro.

The early V6-powered model could only eke out a 7.3-second time, which the Pentastar V6 handily addressed by bringing the 0-97 km/h acceleration time down to 6.2 seconds.

The certifiably insane Hellcat could do the deed in 3.8 seconds, while the 485-hp SRT 392 could blister the asphalt in 4.5 seconds – two cars that definitely won’t make friends among the Green Party set. 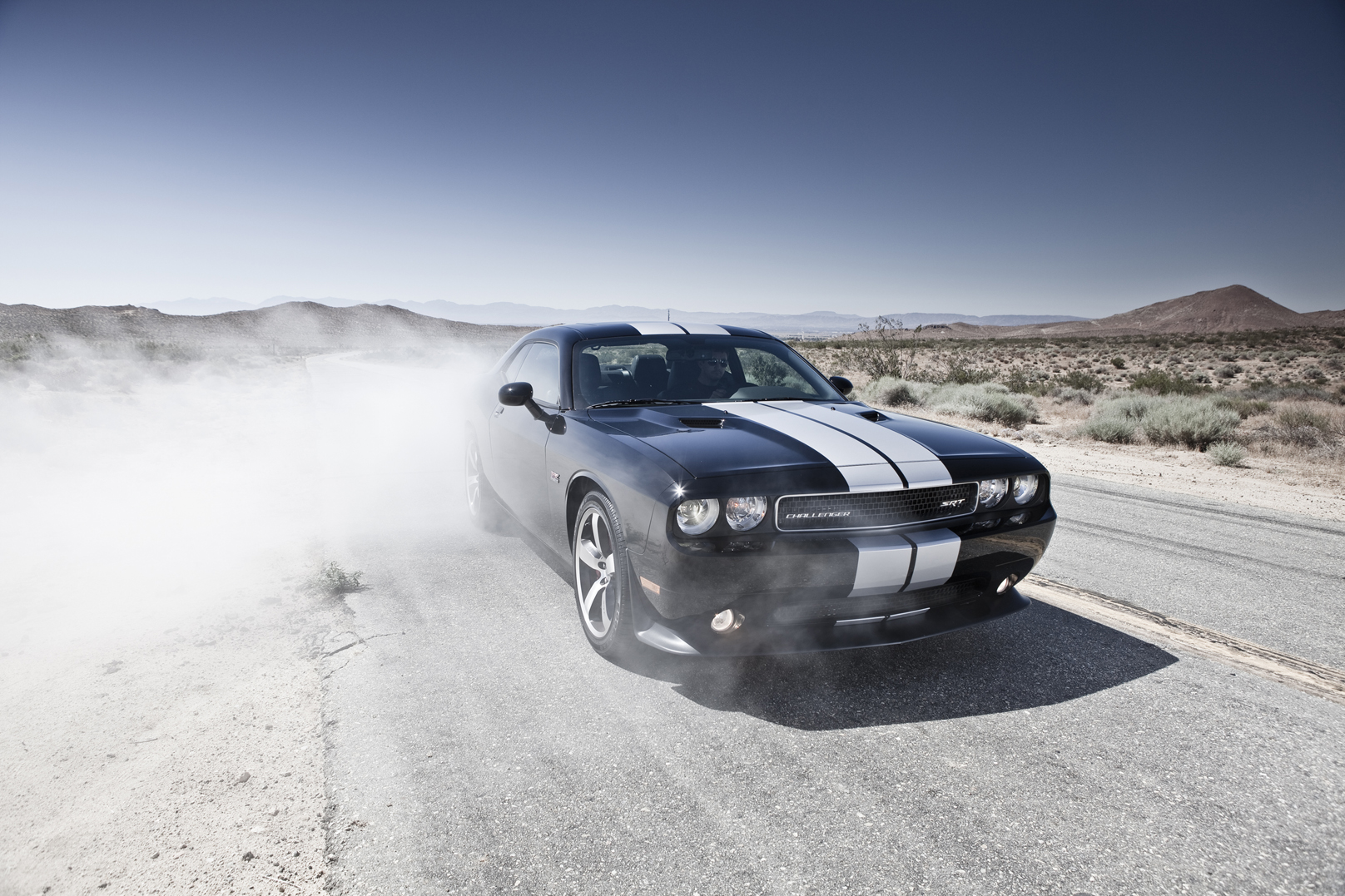 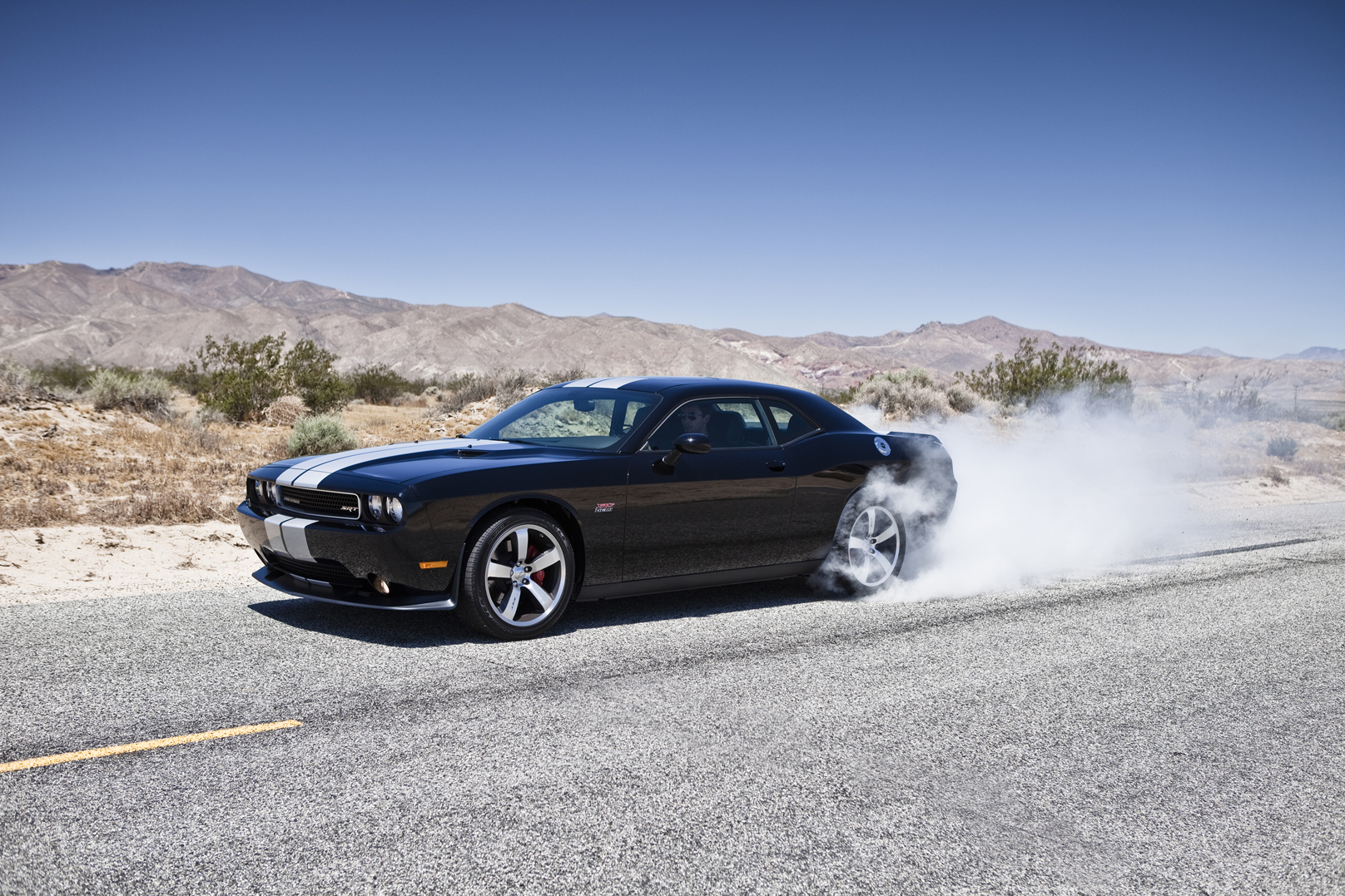 The modified LX platform provided an admirably rigid foundation, allowing the multi-link suspension to work its magic. Unlike the 1970 original, the contemporary Challenger is not just a drag-strip special, but can actually handle in the corners. Perhaps more importantly, the Challenger didn’t beat up its occupants like so many sporty cars are apt to do.

“No wind noise, or barely any road noise at all. It soaks up road imperfections so nicely. More comfort than my Cadillac STS,” noted a pilot online. True, that. The Chrysler 300 chassis yields a forgiving ride that coddles occupants all day long. Transcontinental trips are not out of the question – just try doing that in a Corvette.

Fuel economy? Don’t ask, although the tall gearing will net better than 30 mpg (9.4 L/100 km) at moderate highway speeds with the Pentastar V6 and even the 5.7-L V8, owners report.

While it’s fair to say the Challenger has held up well, owners may be so star-struck by their rides they don’t always remember the little things that can sideline their love. Fortunately, some owners have been taking notes.

There’s a troubling issue involving short-lived alternators. Chrysler is recalling 2011-2014 models equipped with the Pentastar V6 because its 160-amp alternator may fail and result in sudden stalling. Outside of the recall, owners report that the alternators on some V8 engines are also failing.

“Alternator went out at about 82,000 kilometres. It cost $600 to replace, but seven weeks later I am getting a low voltage alert again. I had it tested and the alternator failed. I’m afraid this car is going to die in the middle of an intersection,” wrote the owner of a 2012 R/T V8 model.

Reportedly, the side windows can roll up and down on their own, a quirk that may be related to Fiat Chrysler’s notorious TIPM (Totally Integrated Power Module) issue that’s been documented in other models. Hard starting is another symptom. A few Challenger owners have had their TIPM and wiring harness replaced. 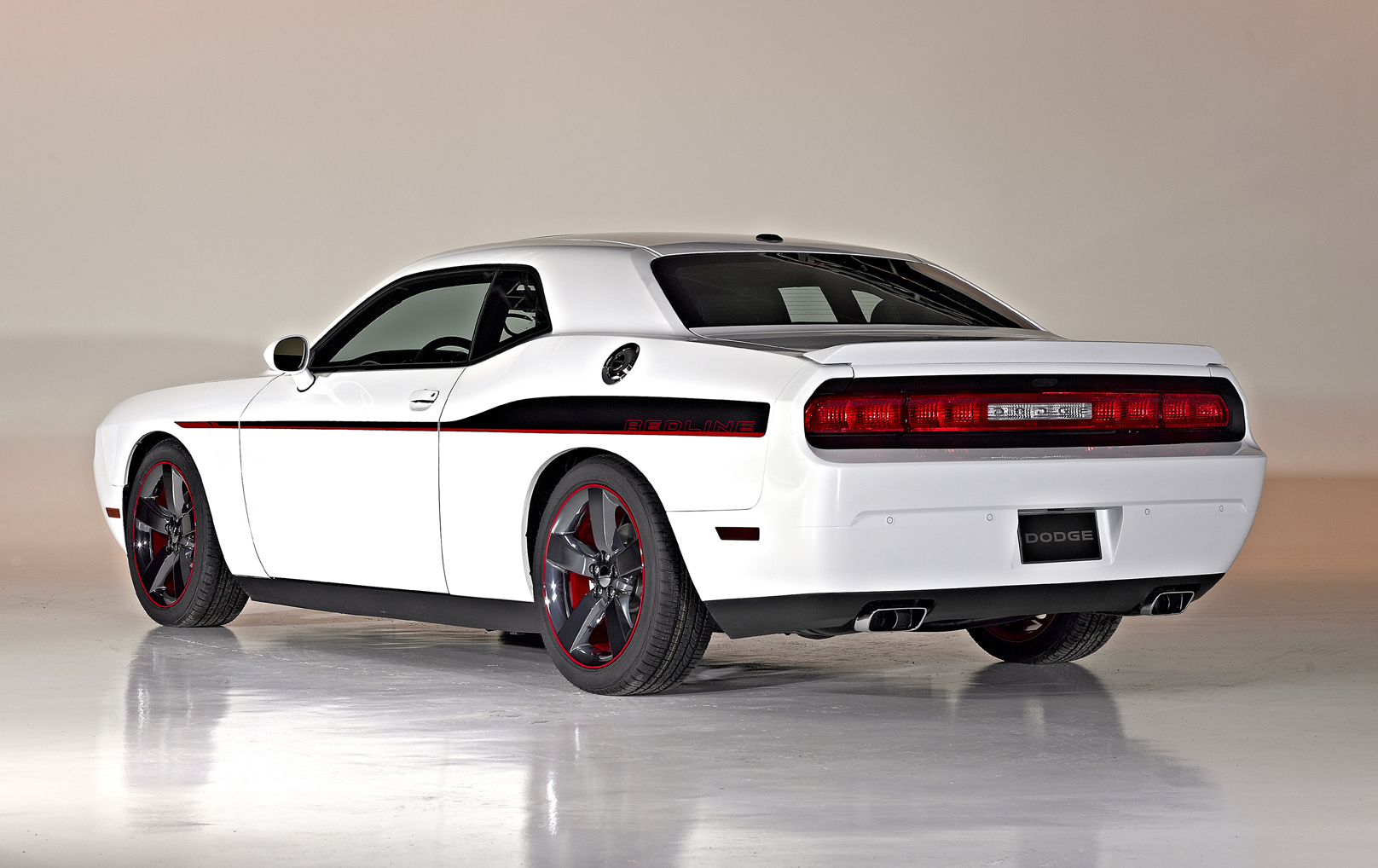 The ZF8HP eight-speed automatic transmission has been the subject of a number of complaints since it was introduced for 2015. Owners talk about hard shifting, especially during the first drive of the morning.

“It will literally jolt the car back and forth so violently you’ll feel as though you’re being repeatedly rear-ended,” is how one driver described it online. Dealers call the abrupt shift action “normal.” Incidentally, the German-designed ZF transmission has displayed problems in numerous vehicles it’s been installed in, including the Acura TLX.

Beyond these quality lapses, owners have reported fast-wearing front-end components, including tie rods and sway-bar links, problems that may cause the tires to check out early. Other maladies include fuel leaks, short-lived batteries, poor-wearing plastic trim and the aforementioned sagging headliner.

Despite the mechanical setbacks, owners are hard-pressed to give up their sweet, sweet rides – evidenced by the fact the Challenger retains its value extremely well, according to Canadian Black Book. Its slow depreciation can soften the financial blow of any shop visits.