Brampton Builds a Demon of a Drive

Dodge/Chrysler has 1,200 dynamometers, but just one capable of withstanding the force of up to 770 lb/ft of torque the Demon engine produces.

INDIANAPOLIS: There’s probably no other car company on the planet that could, or would, build something like the 808 hp, 2018 Dodge Demon.

At the media launch of the Brampton Assembly Plant built Challenger Demon, Dodge officials explained it was planned and built under super secret circumstances, so that only a handful of engineers and designers knew of its existence.

Dodge/Chrysler has 1,200 dynamometers, but just one capable of withstanding the force of up to 770 lb/ft of torque the Demon engine produces.

And as part of the hush-hush nature of the project, they rigged the ratings to make it look like the lesser torque of the 707 hp Wildcat version of the same 6.2-litre engine.

At night, they would take down all the designs and logos before they went home.

The evening before its world reveal at April’s New York Auto Show, the details were still being finalized to keep it as big a surprise as possible – and it was.

Those involved feel they were on a mission. Not to build a sportscar or a racecar, but the best “muscle car” the world has ever seen.

Their mantra was, and is, not to “blend in” with the state of the auto industry that is currently breeding crossovers on top of crossovers, but to “celebrate being different.”

The decision to march to a different drummer goes back to 2013. Since that time, while sedan sales plunged in favour of crossovers, Dodge Hellcat Challengers and Chargers sales are up 40 per cent.

Dodge claims the Challenger Demon is the world’s fastest production car with a 0-60 mph time of 2.3 seconds and 0-30 mph in 1.0 seconds with a NHRA certified quarter mile time of 9.65 seconds and speed of 140 mph.

The engine is based on the 6.2-litre Hellcat supercharged overhead valve V8. But in Demon tuned trim it produces 808 hp and 717 lb/ft of torque on premium 91-octane fuel or 840 hp and 770 lb/ft on 100+-octane, which Dodge claims makes it the highest horsepower V8 ever built. 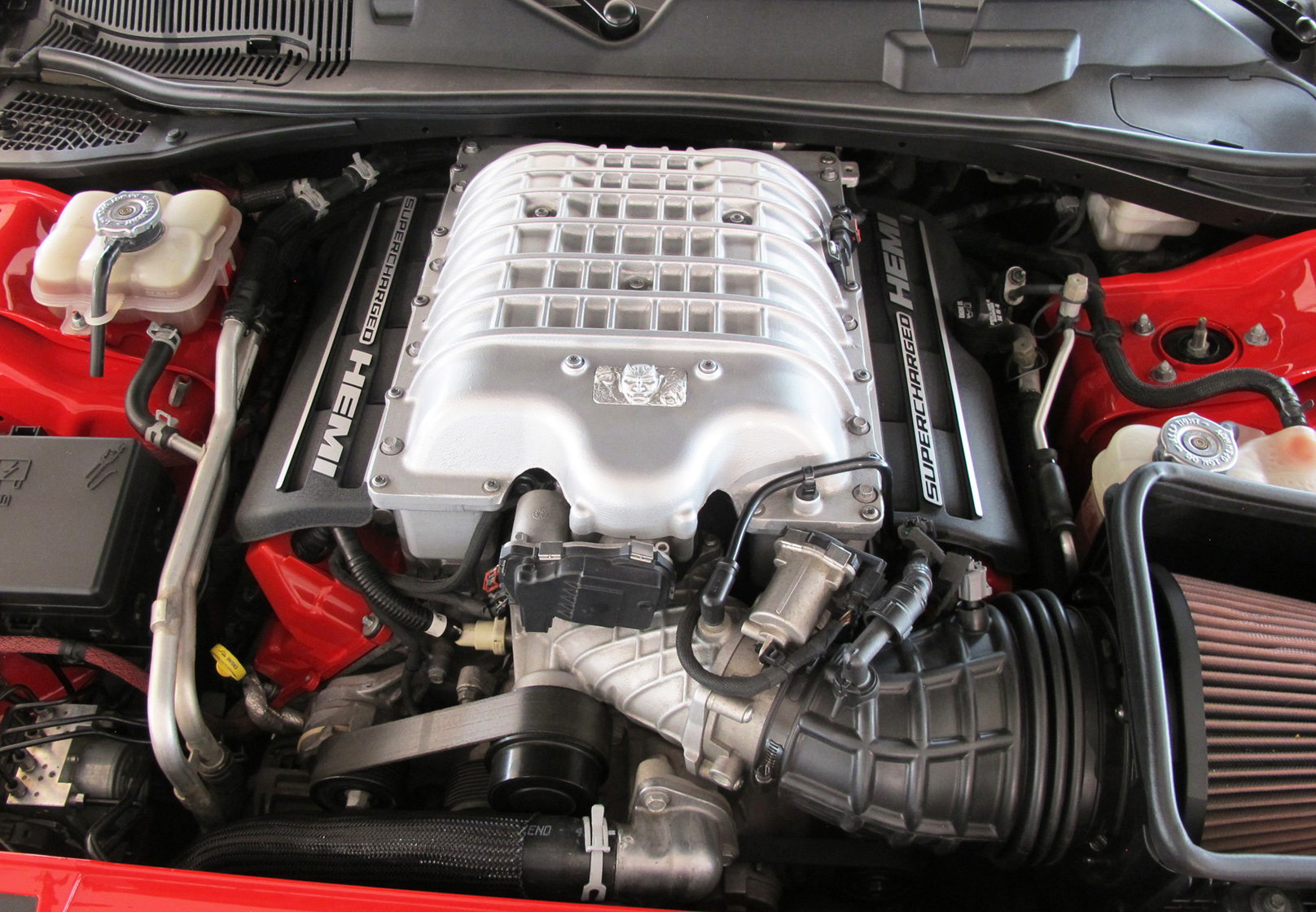 Like the newly announced “Wide Body” Hellcat Challenger and Charger, the Demon has enlarged fender flares which add 3.5-in to the width. This gave the engineers the chance to fit wider, 315/40ZR18 tires and change the suspension geometry that results in much increased grip.

The Nitto brand street-legal drag race radials were specifically tuned to the Demon, including a special compound and a “Demon” logo on the tire wall. These have 40 per cent more “launch” potential than the Hellcat tires.

For those who want the Demon just for the drag strip, the passenger seat can be deleted and optional are narrower “front runner” tires which lower front-end weight.

An engine like this needs lots of air and the Demon can go through 5,000 cu ft of air on one full-race run down the drag strip. To this end, the hood mounted Air Grabber air scoop is fully functional, helping give it the largest air induction (45.2 sq in) of any car on the road. In addition to an air-to-liquid intercooler system, Demon sports an “After Run Cooler” that keeps the coolant flowing after the engine is shut down so the engine block does not become a “heat sink” and retard performance for multiple runs down the strip.

Dodge took us to the Lucas Oil Raceway near Indianapolis to try the Demon and a full sanctioned National Hot Rod Association (NHRA) drag strip. With launch control, Line Lock and a myriad of ways to configure power delivery, the drill was pretty simple. Get into the staging area, smoke the tires on a layer a water to clean any grit off, turn on launch control, set the revs and then release the paddle shifters and hit the gas.

If you didn’t false start, you covered the quarter mile in the low 10 seconds. 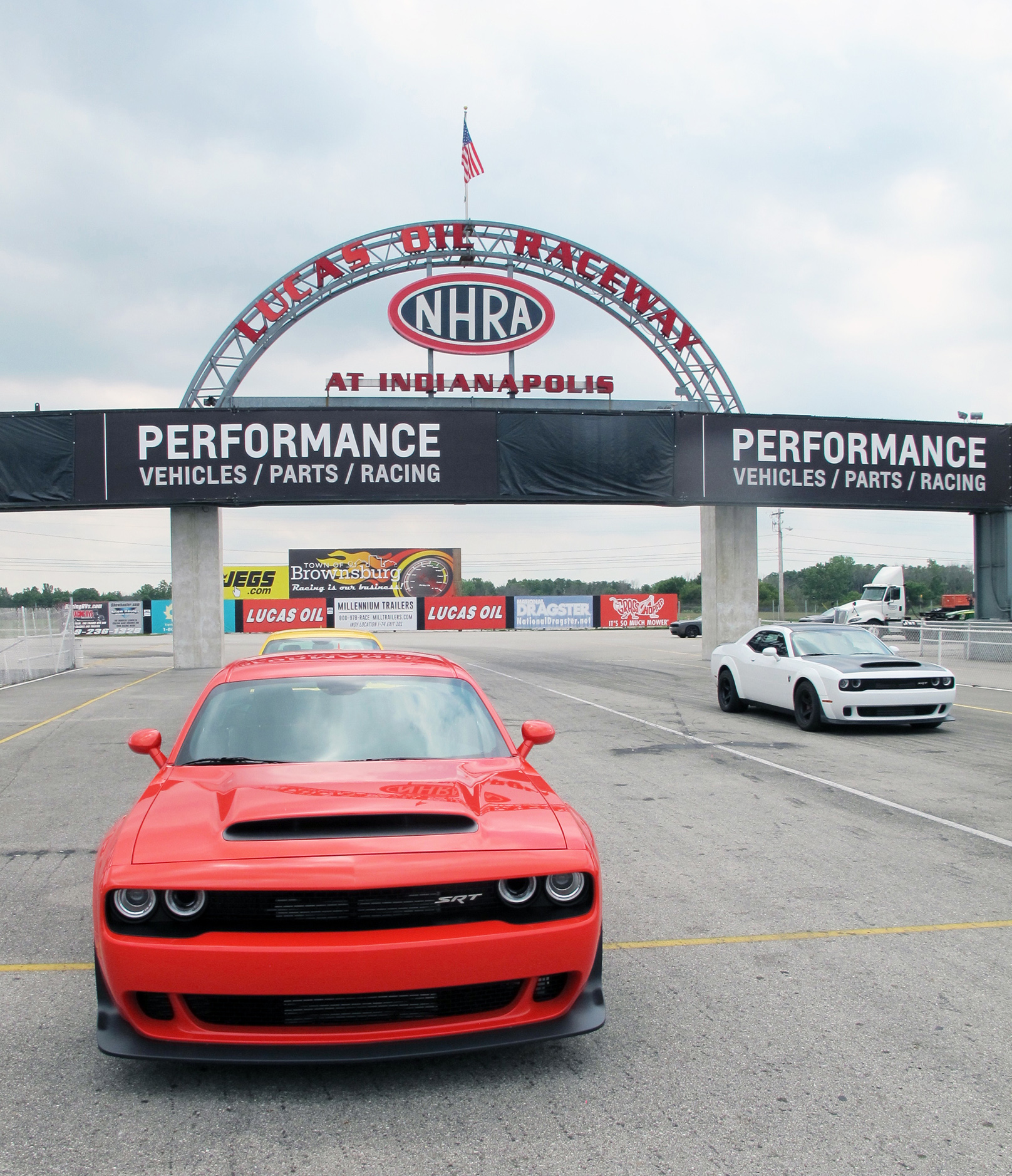 Despite all the power, the computer systems release was not as violent as I expected. There was no squealing of tires, just a thunk into the seat as the gears changed.

In fact, I was told the Demon has the highest g-force acceleration of any production car on the road at 1.8 g.

But this is also a car you can drive on the street and it has to be produced meeting all emission and safety standards. It comes with a three-year/36,000 mile limited warranty and five years/60,000 miles on the powertrain.

What it will cost to insure in Canada might make it out of reach for some, such as male drivers under age 25. But, as always, if there’s a will, there’s a way.

And the Dodge people are right that this car is so different from the rest out there. Its presence makes a statement about, frankly, owning the “fastest set of wheels in town”.

This Demon is an instant collector car, the likes of which we will probably never see again.
Buy one before they’re gone forever.