It’s the designation Ford used to name a thinly-disguised “production race car” Mustang in the Trans-Am racing series in 1969 and 1970.

These prices are about ten grand more than in the United States. With the Canadian and U.S. dollars more-or-less at par, you wonder why Ford doesn’t only sell the car in Canada and make Americans buy them and have to re-import them.

“This is a track-ready car with a licence plate,’’ said Mustang chief engineer Dave Pericak. “No satellite radio, no navigation system, no glass sunroof. Nothing that doesn’t make it go faster.’’

What about the cruise control, power windows and air conditioning?

“We did look at a truly bare-bones car,’’ he added, “but this car had to be street-able too, and it was just too nasty without some of those creature comforts. But we did remove about 11 pounds of sound-deadening material.’’

The heart of any car, especially a performance car, is its engine.

The 5.0 litre (that’s actually closer to 305 cubic inches than 302, but what the heck) twin-cam V8 in the 2011 Mustang GT is already pretty neat: 412 horsepower, great refinement, decent fuel consumption.

To make it worthy of the Boss 302 label, though, it had to be better.

Shifting the red line from 7,000 to 7,500 r.p.m. doesn’t sound like much. However, “stresses in an engine increase exponentially as engine speed rises,’’ explained Harrison. 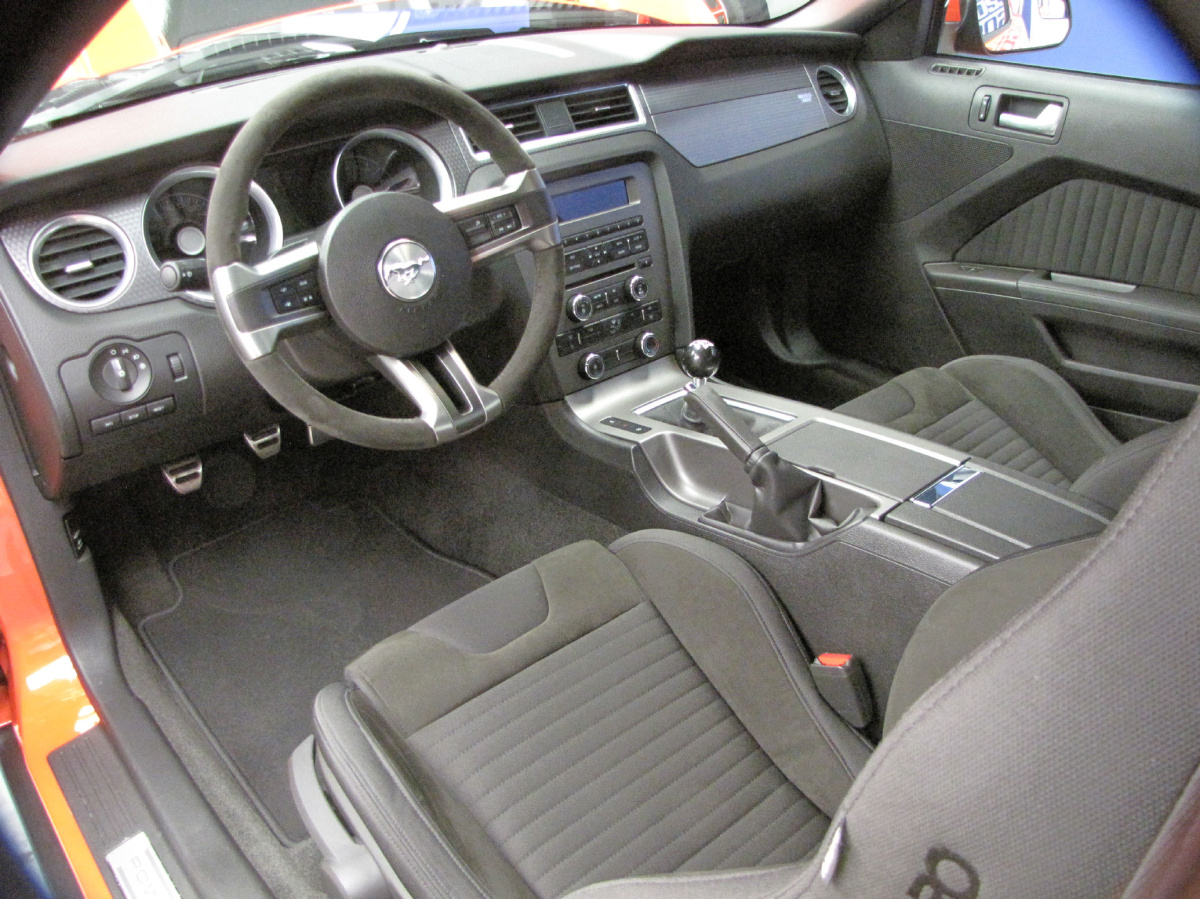 To get there, and maintain production car durability, it necessitated a complete re-think of the upper end to ensure “breathing” — that enough air could get into the cylinders.

“We did consider forced induction — supercharging,’’ noted Harrison. “But that didn’t seem consistent with the Boss 302 heritage.’’

Instead, they developed a new intake plenum with what amounts to short-runner velocity stacks that run the risk of sucking nearby birds and small rodents into the engine.

Lightened valve train components, including hollow-stem valves (sodium-filled on the exhaust side for added cooling capability), forged aluminum pistons and sinter-forged connecting rods are all part of the package.

Each cylinder head goes through 2.5 hours of CNC (Computer Numerical Control) machining to get ready for Boss 302 duty.

“There’s the answer to why we don’t make this engine standard on all GTs,’’ noted Pericak. “It’s just too expensive.’’

The results: either 440 or 444 horsepower (depending on which Ford reference you want to quote), a substantial increase from the 412 of the base GT V8, and a peak of 380 lb.-ft. of torque, which is actually down 10 lb.-ft. from the base car.

But the objective was to make this engine pull right to that red line — and it does, as we shall soon see.

A beefed-up six-speed Getrag manual gearbox is the only available transmission. It drives the rear wheels via a 3.73 ratio differential. A TORSEN limited-slip differential is an option.

Exhaust note was a prime concern for Ford’s engine team. The Boss 302 features additional exhaust outlets on the sides of the car, somewhat oddly in my view. They are hidden inside the rear fender wells rather than being “out there.”

Because Ford could not, as a manufacturer, build an exhaust system that would violate drive-by noise legislation, the stock system contains noise-attenuating discs inside these auxiliary ports. Undo two bolts and — oops! — the discs fall out.

But who would do such a thing?…

The suspension got a thorough re-work too, with higher-rate springs all around, stiffer bushings and, perhaps most important, five-stage adjustable dampers.

Said Brent Clark, who’s in charge of vehicle dynamics: “We were looking for balance — good turn-in, stable cornering, the ability to really put the torque to the road. The car is delivered with the dampers set at ‘2,’ but a quick flick of a flat-head screwdriver and you can go firmer or softer as you prefer.’’

The front end was lowered by 11 mm, the rear by just one, giving the car more rake, which also aided it aerodynamically. This leaves perhaps a larger gap around the rear wheels than would be considered ideal from a styling perspective.

“But as a road-ready car, we have to ‘package-protect’ for winter tires or even chains where they are mandatory,’’ noted chief engineer Pericak. 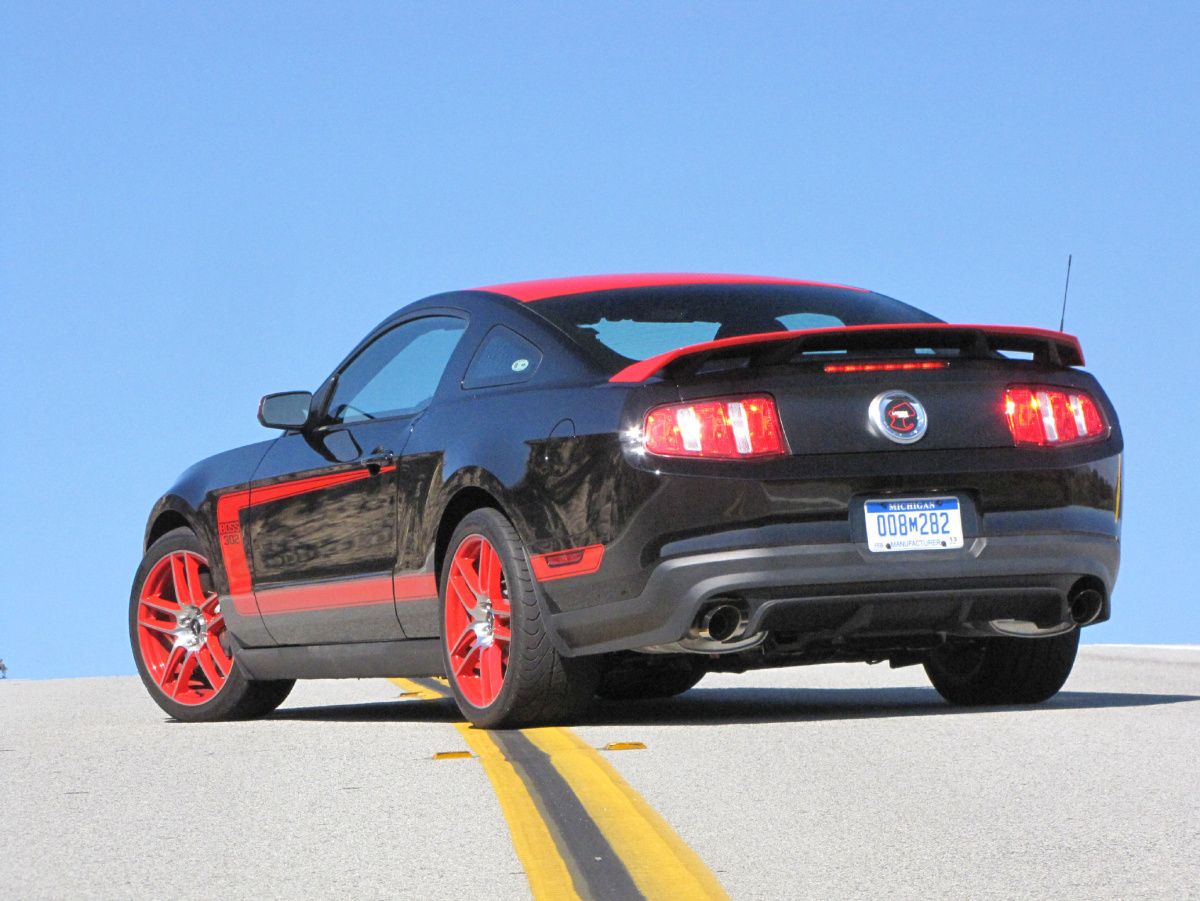 The Traction Control and Electronic Stability Control systems have also been recalibrated for high-performance driving. Brembo four-piston front calipers and the standard GT set-up with special Boss brake pads at the rear look after scrubbing off the speed.

Nineteen-inch diameter wheels — nine inches wide at the front, 9 ½ at the rear — fitted with Pirelli P-Zero summer tires are the final link in the suspension chain.

Other styling features include the inverted-C body side decals, an aerodynamic splitter below the grille and a rear spoiler that simultaneously give the car the requisite bad-boy look, pay homage to the 1969-1970 originals and improve aerodynamics.

Recaro seats lifted from the Shelby GT 500 Mustang are one of the very few options on the car.

Five exterior colours, matched to either white or black hood and roof panels, are offered.

The Laguna Seca edition, named to commemorate the location of Parnelli Jones’ first win in the 1970 Trans-Am series (which Mustang won), dials most of this up even further.

The power train remains unchanged. But the suspension gets a further set of tweaks, with GT 500 lower control arms, different spring rates (actually softer in front than the base Boss), re-tuned sway bars and bushings, 10-inch-wide rear wheels and Pirelli “Corsa” race-ready rubber.

There is no rear seat. Instead, there is a body-stiffening cross brace.

An even more aggressive front splitter (watch out for gas station sidewalk ramps) and just two exclusive colour choices — black or silver, with red hood and roof panels — will ensure that your neighbours know which version you bought.

Where else could Ford launch this car but the famed Laguna Seca road racing course?

As the shuttle bus from the hotel approached, we saw the line of available testers. Only one was painted “Yellow Blaze Tri-Coat Metallic,” which appeared to be the closest to the yellowy-orange colour of Jones’ Trans-Am winning car.

We first drove along the equally-famed Pacific Coast Highway through Carmel to Big Sur, then came back for some hot laps of the track.

To me, two things stand out about this car.

First, it’s “wicked fast,” as dynamics supervisor Brent Clark put it. Ford won’t quote either quarter mile or 0-60 (m.p.h.) times, but chief engineer Pericak said we’d be “pleasantly surprised” by the former, and that the Boss 302 knocks about three tenths off the regular GT’s score.

(Most instrumented tests have that latter number in the 4.3 second range. Do the math.)

Second, the car does not beat you up. Yes, on rough roads the limitations of a solid rear axle (finally) start to show. But this is a car you can easily drive year-round — properly fitted with winter tires when appropriate, of course.

Our car had the TORSEN diff and Recaro seats (packaged together in the Boss 302, standard in the Laguna Seca). The Recaros are particularly well done; they supply added lateral support without being too restrictive for ease of access.

However, I do wish somebody other than Volkswagen could design a seat reclining mechanism that remembers its setting when you flip it forward to get into the rear seat. How hard can this be?

The performance hinted at on the road becomes more obvious on the track.

Again, the torque talks. Corners that are second-gear in just about any car — even the Corkscrew — are easily handled in third in the Boss.

The turn-in and the transitions — from braking, through mid-corner balancing, to power-on exit — are smooth and controllable.

It felt as if the Laguna Seca edition had a shorter final drive ratio; it seemed to run out of revs sooner, needed to be upshifted sooner, than the base Boss.

The brakes deserve special mention. The retardation is prodigious. But again, it is the progressiveness, the instant response, the balance, that impresses.

From the outset, the performance goal of the Boss 302 was the BMW M3.

“We really respect that car,’’ said Clark. “We wouldn’t have set it as our benchmark if we didn’t. But it has a completely different approach to handling than we were looking for.’’

In fact, the entire project was more-or-less conditional on being able to beat the Bimmer around this circuit.

In the hands of various race drivers, including Parnelli Jones, who acted as a consultant throughout the development process, the Boss 302 has about a one second advantage over the M3.

Perhaps the most obvious question is: Is the Boss 302 worth the extra money over the GT? Perhaps it’s a question only you can answer because the GT is very, very good.

The Boss 302 is substantially better in the go-faster department, the

Laguna Seca is even more intense.

The 4,000 cars which will be available have largely been spoken for already by Ford dealers on both sides of the border. Presumably, those dealers have buyers for these cars.

Perhaps, then, that question has already been answered.

Travel was provided for freelance reviewer Jim Kenzie by the automaker. jim@jimkenzie.com