Recently, members from the Automobile Journalists Association of Canada (AJAC) descended on Canadian Tire Motorsport Park north of Bowmanville, Ontario to evaluate and vote on entries in the Canadian Car of the Year program.

The gathering, known as TestFest, is a two-day test-drive event that brings together a wide variety of new and updated vehicles that are competing not only in their respective categories, but also for the top two awards – Canadian Car and Utility Vehicle of the Year.

This year, there are 51 vehicles entered across 12 categories that cover a broad range of segments from pick-ups to large cars, small cars, and premium electric vehicles (EV) to name a few. The evaluations took place on CTMP’s Driver Development Track (DDT), along with an off-road course, local roads in and around the track, and an off-road course designed especially for the pick-ups in the competition.

I’m tackling several categories for Wheels.ca and this time around it’s large cars.

The Nissan Altima is all-new for 2019, a complete clean-sheet redesign as its handsome sheet metal reveals. As sedans go, the Altima is a real looker to these eyes, especially in Platinum trim with its larger 19-inch aluminum wheels that really complement its wide, deep V-motion grille, and LED headlights.

It’s a similar story on the inside which has been completely overhauled, and to good effect. From the leather seating, to the floating 8-inch infotainment screen with standard Android Auto and Apple CarPlay smartphone integration and handsomely redesigned dash layout, the Altima’s cabin has a much richer feel than its predecessor. 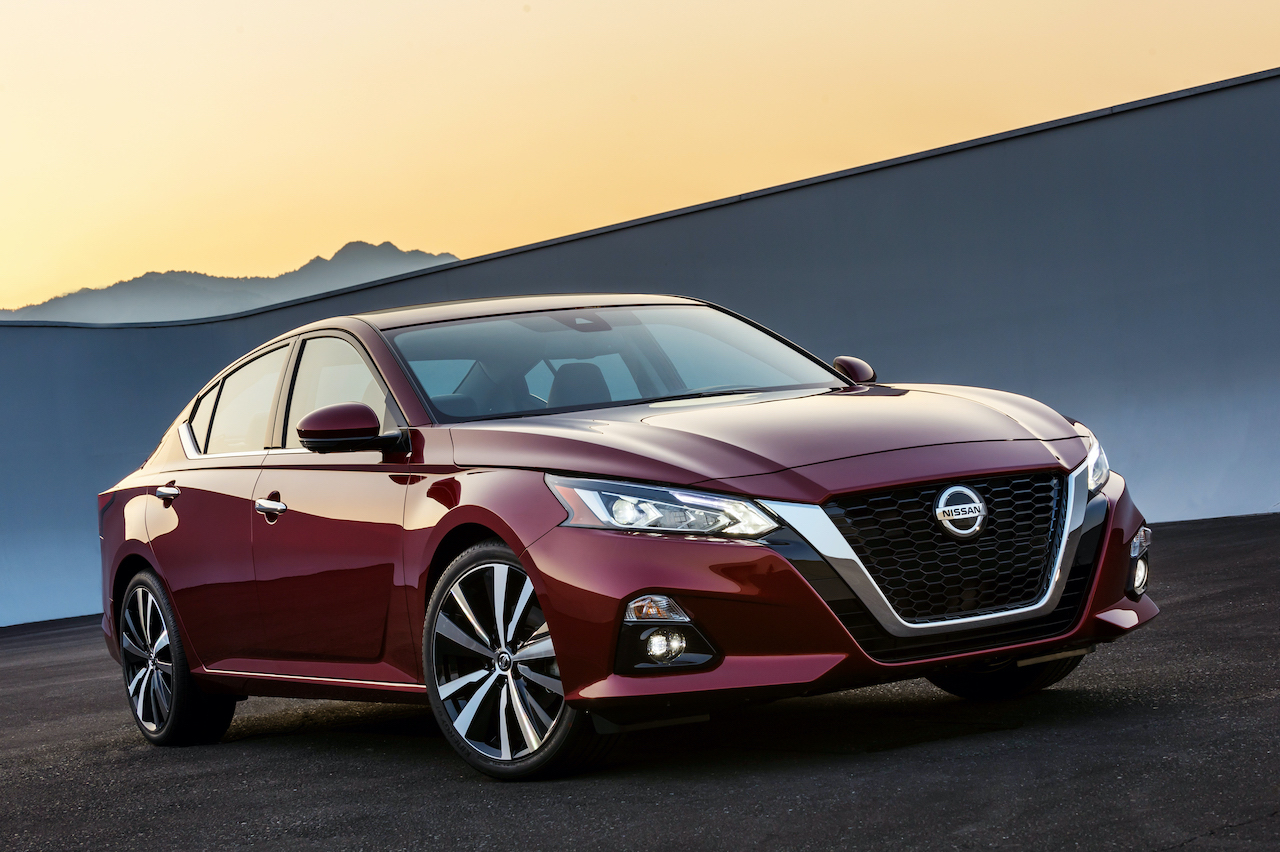 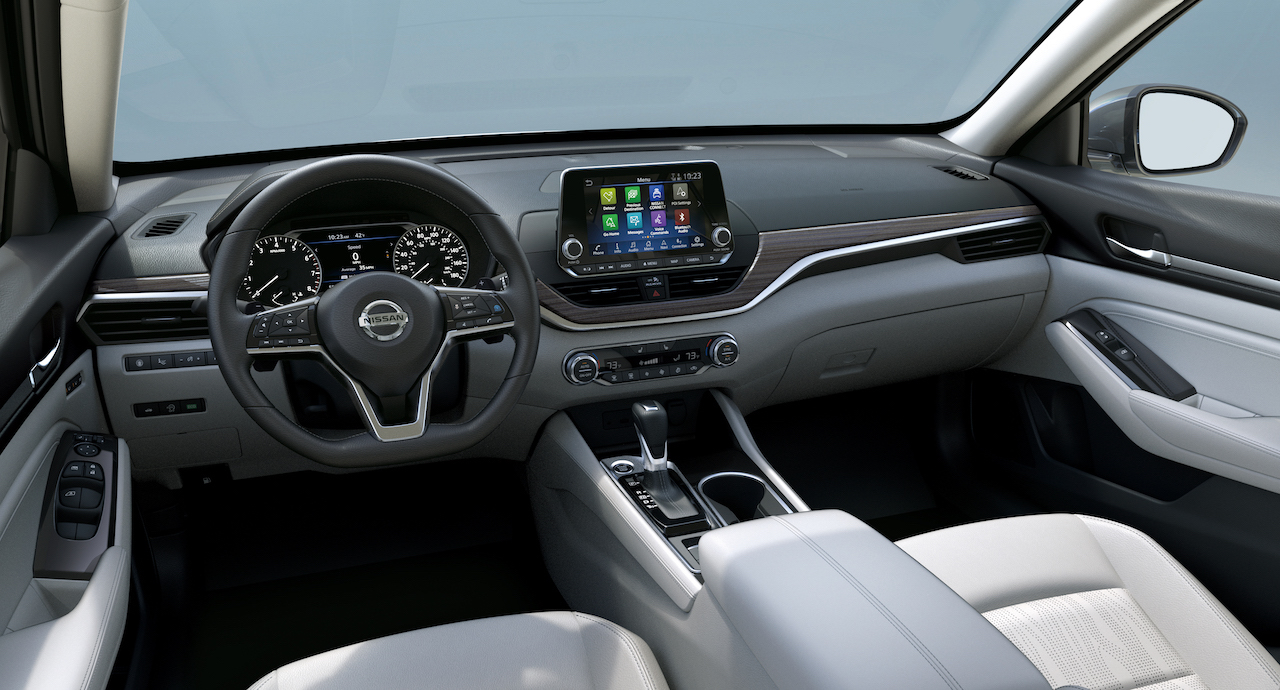 While the Altima really nails design and content aspects, the drive is fine but feels somewhat lacking. Yes, the 2.5L 4-cylinder (182 hp / 178 lb-ft.) has 80 percent new parts, but acceleration and power output are underwhelming. Being paired with a rubbery CVT doesn’t help either.

I like the idea of standard all-wheel drive as a means of making a sedan more relevant in a sea of SUVs and crossovers, but I can’t help but look longingly at the U.S. where the Altima is also available with the company’s 2.0-litre VC (variable compression) turbocharged 4-cylinder, albeit with front-wheel drive. Now that’s an Altima I’d love to drive. Sadly, no such option exists. I get it – the business case isn’t strong enough to bring it to Canada. Still a shame, nonetheless.

The Subaru Legacy is also all-new for 2019 although in typical Subaru fashion, it helps to see the new parked beside the old to really appreciate the differences. At any rate, my tester was a range-topping GT Premier outfitted with a 2.4-litre turbocharged Boxer 4-cylinder (260 hp / 277 lb-ft.) found in the three-row Ascent SUV. As with all Subarus, full-time symmetrical AWD comes standard on every Legacy.

While I find Subaru’s ultra-conservative design philosophy to be a bit head-scratching, I must credit their designers for giving the seventh-gen Legacy a very handsomely finished interior that benefits from a ton of enhancements. 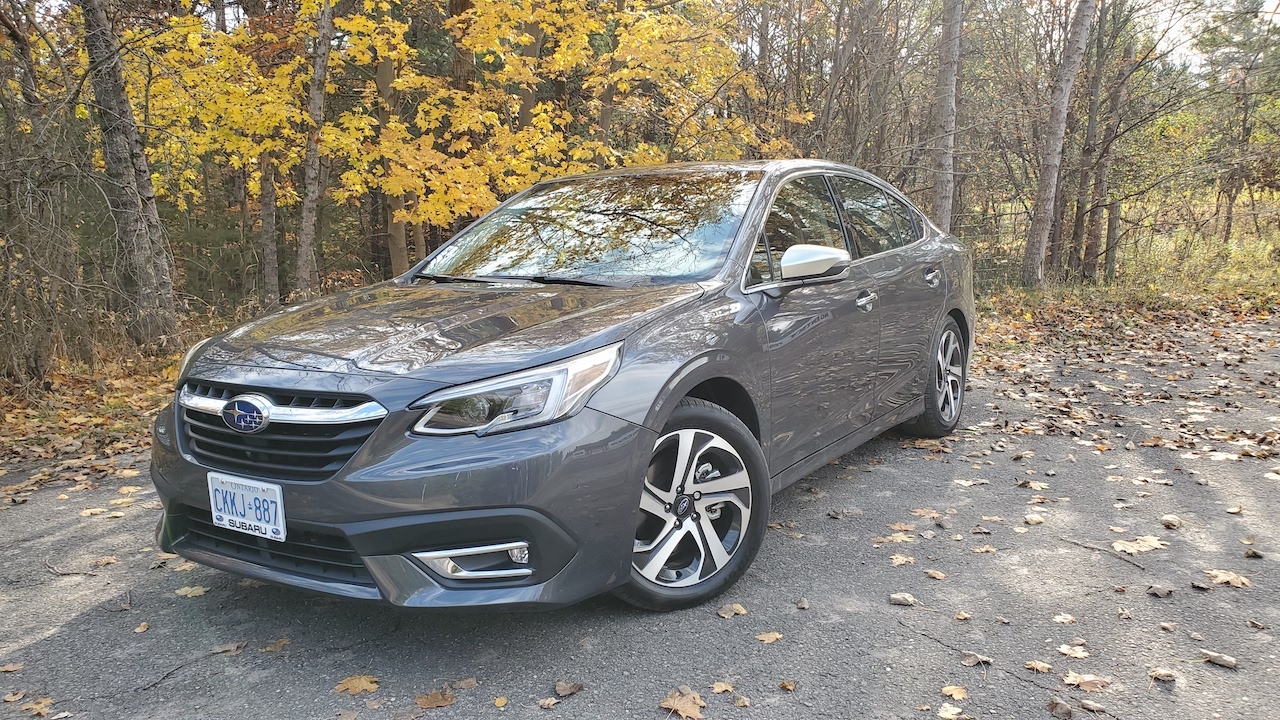 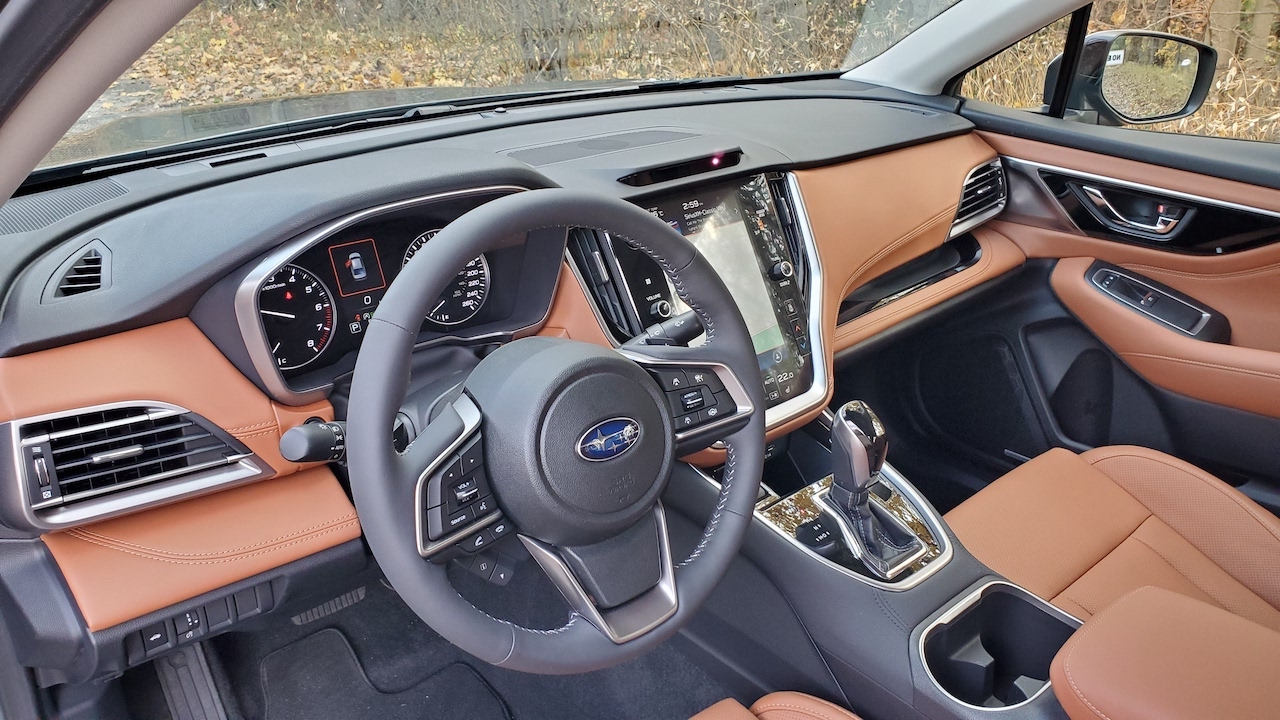 The rich brown leather seating in my tester looked and felt great, and I’m pleased to see Subaru finally begin to say goodbye to its affection for reams of tiny console buttons. An approving nod also goes to the 11.6-inch vertically oriented infotainment touchscreen. I wish the graphics were higher resolution and more colourful, but the screen itself is a step in the right direction.

On the road, the 2.4 turbo Boxer has plenty of pull and makes pleasing turbo sounds under acceleration, which, by the way, is quite snappy considering the big sedan it’s lugging around. The CVT is meh, but it annoyed me less than the Altima’s unit. Would still prefer a regular autobox or a manual (now that would make this engine a real hoot), but alas those options are long gone.

The Legacy’s emergency handling and braking are also quite good for its class. Overall, there’s a lot to like here, but there are others that are just better overall.

While it finished a close second on my ballot, the Volkswagen Arteon is the best-looking car in this group and that’s no small feat considering the competition.

Volkswagen has wisely brought the Arteon to Canada in one all-in Execline trim, so yes, while its $47,995 price tag is almost $10K greater than the most expensive Legacy and $12K more than the priciest Altima, there’s a lot of car for the money here. 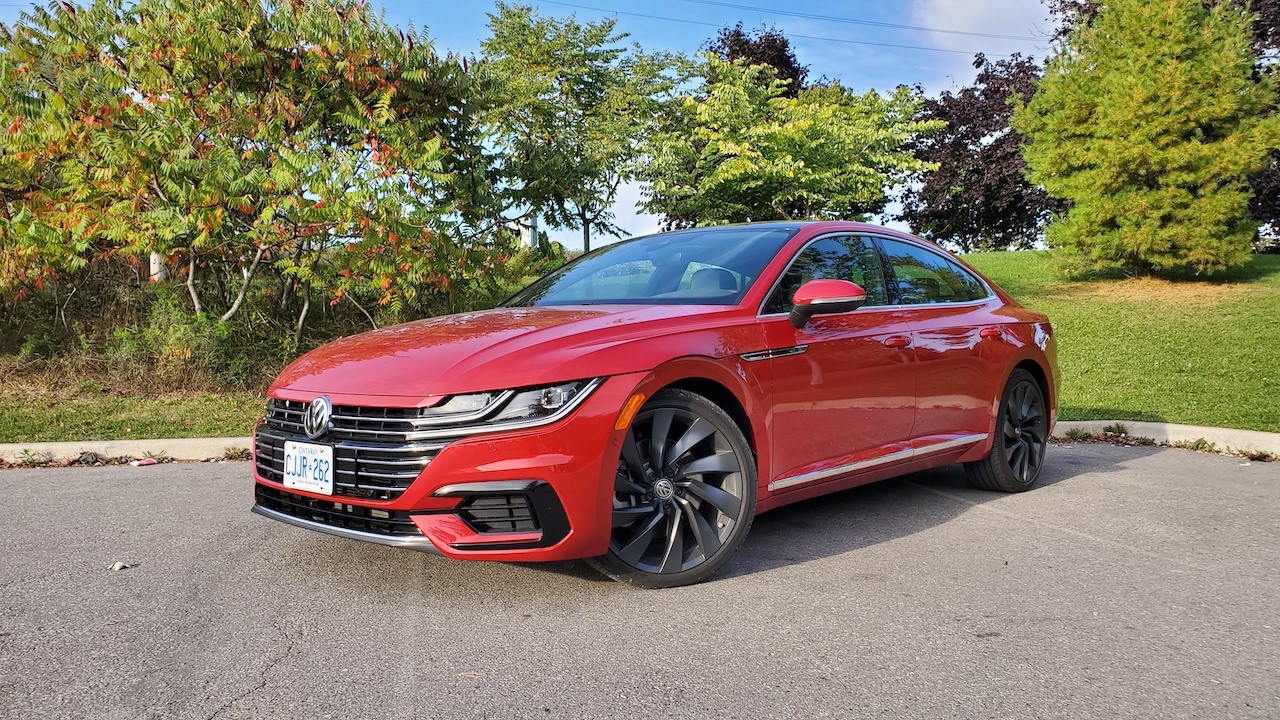 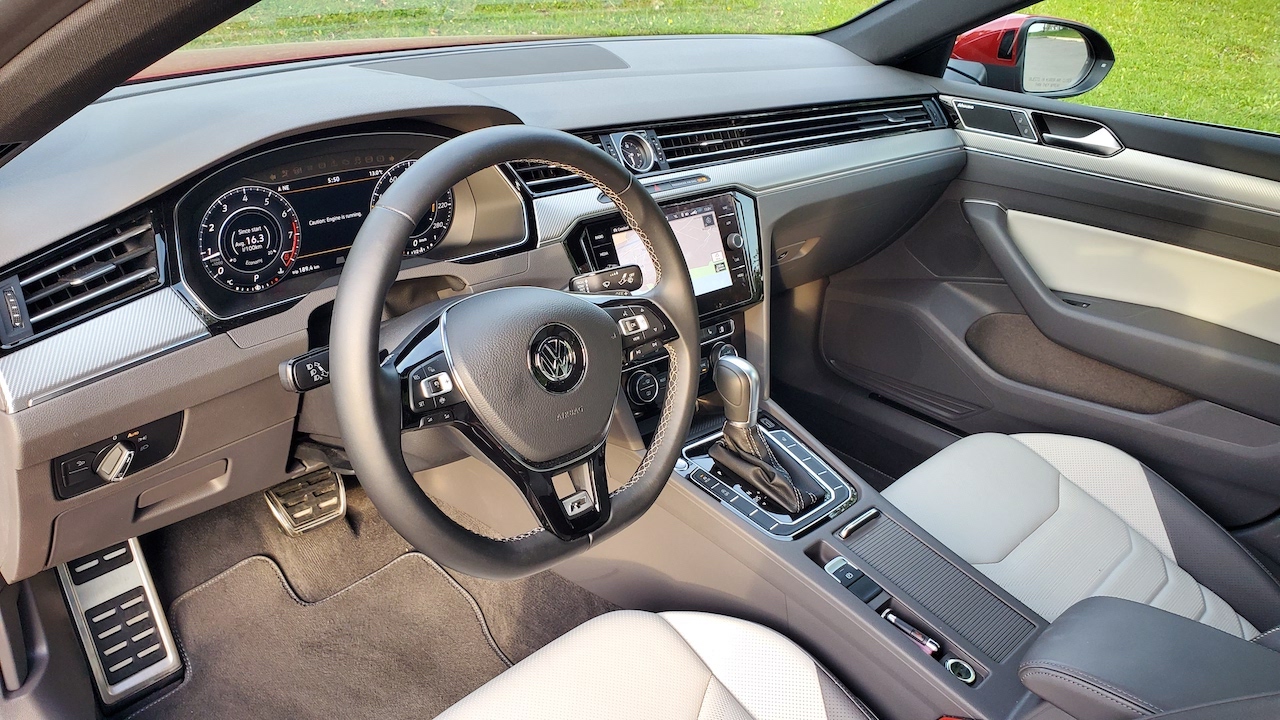 Under the hood is a 2.0-litre TSI turbocharged 4-cylinder engine (268 hp / 258 lb-ft.) that’s paired with an 8-speed automatic, which makes for a fun driving experience. Toggle the shifter to sport mode, squeeze the throttle and the turbo four is more than happy to slingshot this grand tourer around at a pace you might not be expecting for a long, wide, and heavy car.

It’s not perfect, of course, because no car is. In addition to a hefty price tag, the Arteon suffers from an interior that is a bit too spartan to these eyes, despite being exceedingly well-stocked. These are nit-picks though, for the Arteon is a very good car that would have been my winner were it not for the presence of a truly outstanding Korean.

What can I say about the Kia Stinger that hasn’t already been said?

In barely two years on the market, this grand tourer has been the subject of near universal critical praise while racking up a pile of accolades, including the 2019 AJAC Canadian Car of the Year.

And now here it is again, back to defend its crown, and while I can’t predict if it’ll be a repeat Car of the Year winner, it is the best car in this category. 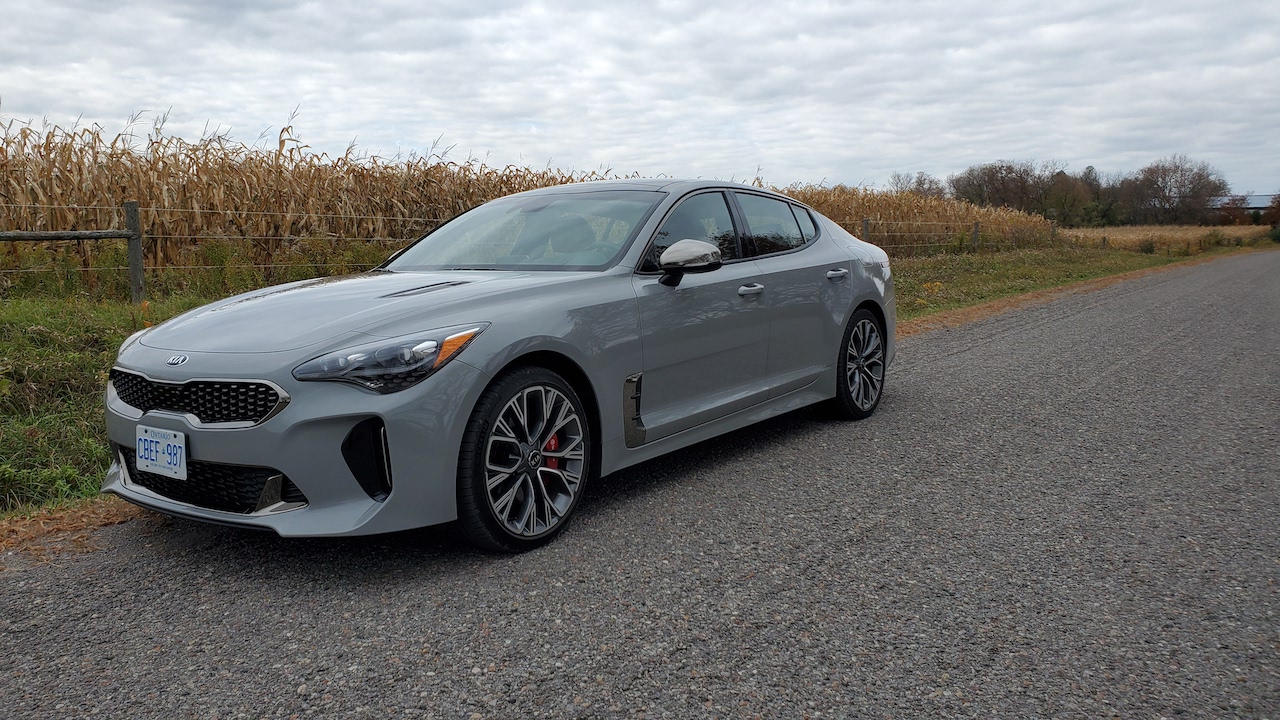 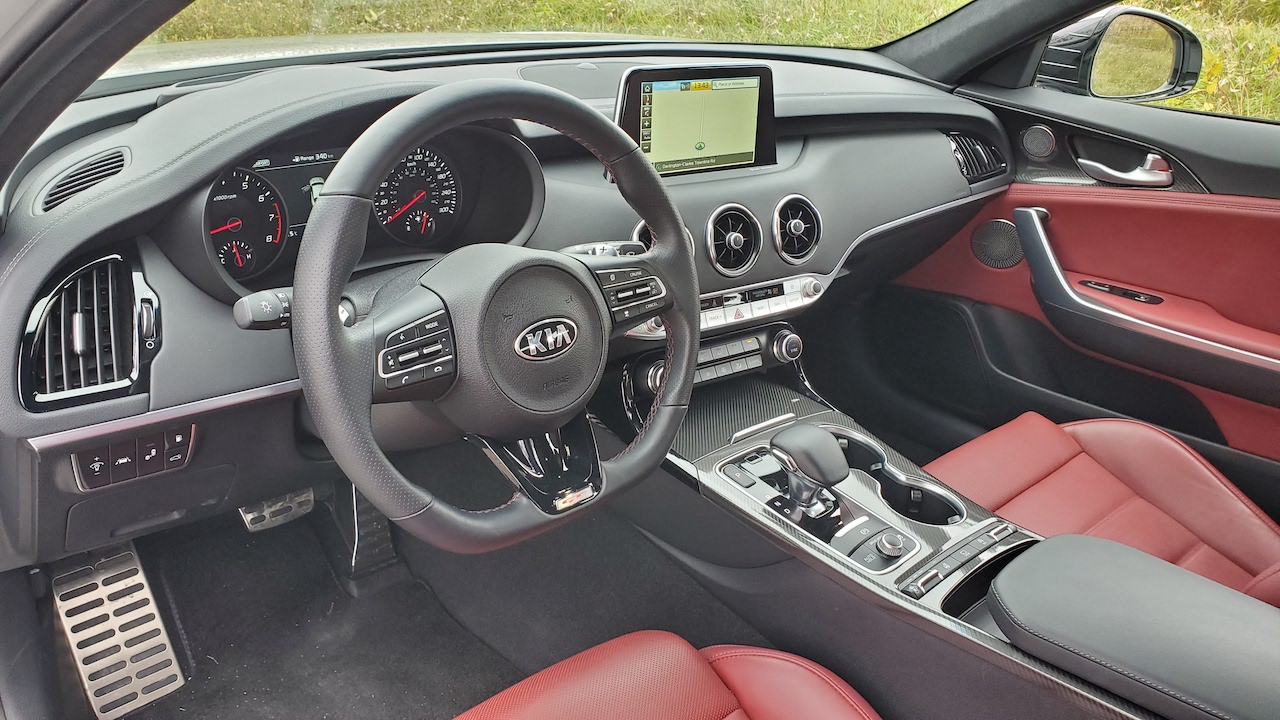 What sets it apart? Well, I’d say that where the other cars in this category excel in a few areas (styling, packaging, performance, affordability), the Stinger does everything well. And it is an absolute blast to drive. On road, on track. Anywhere. You want to drive it hard, and it rewards hard driving with many ear-to-ear grins. A perfectly symbiotic relationship.

It has the great GT looks, the beefy, snarly V6, and a stacked interior with a low-seating position that ensconces the driver in its performance cockpit. Then the push button starter is engaged, the thrum of the 3.3-litre twin-turbocharged V6 (365 hp / 376 lb-ft.) tingles the hands on the steering wheel and its game on. Toggle the driving modes if you want, but my tester was set to sport. A set it and forget it situation if there ever was one.

Bottom line, the Stinger ranked first on my ballot in this category last year and that’s where it remains. With the heart of a champion and plenty of fire in its belly.