Audi Reveals its Most Technologically Advanced Car Ever

First Look: The highlight of Audi’s summit was the launch of their flagship sedan A8, the new design language incorporates a wide single-frame grille, sporty roofline and coupé-like silhouette.

BARCELONA – Audi took a radical approach to highlighting all things Audi with their recent world summit in Barcelona.

In rock concert fashion they promoted all past achievements, what’s happening today and more notably where they are heading in the not so distant future – all showcased all under one roof at the same time.

Undoubtedly the star of the show was their totally redesigned fourth generation flagship A8 sedan.

The rear end is accentuated by an optional OLED light bar that stretches the full width of the car, adding the illusion of extra visual width.

Under the hood Audi will now offer five engine choices all of which will now use a new 48-volt architecture that will offer a range of mild-hybrid functions, including engine off coasting, increased start/stop operation and kinetic energy recuperation under braking, via a belt driven alternator.

Also Read: Intelligence and performance in a luxury package

Power to all four wheels will be through Audi’s quattro all-wheel-drive system and an eight-speed automatic transmission.

The planned plug-in hybrid will have the 3.0-litre turbocharged V6, paired to an electric motor mounted between the engine and the transmission.

The 14.1 kWh lithium-ion battery will give it a 50-kilometre range on electric power alone at speeds of up to 135 km/h. Adding to the forward thinking of Audi, charging can be conducted wirelessly through a pad that will be situated on the owner’s garage floor. 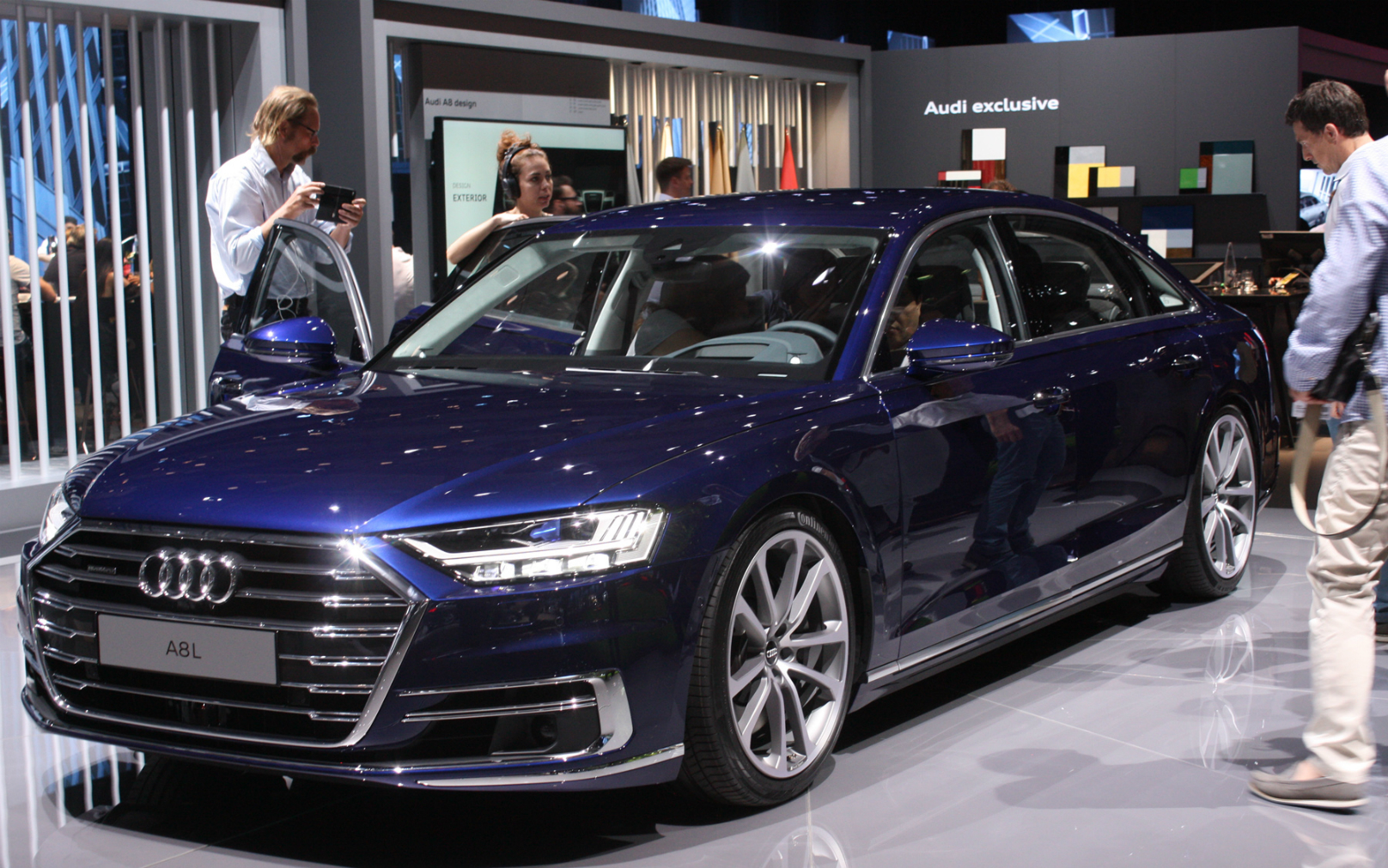 Audi have added a very clever and truly adaptive suspension system. Load-levelling air springs and electric motors, mounted on each corner, power the left and right halves of the anti-roll bar independently with no connection between each side.

This delivers a smoother ride by reducing nosedive under hard braking and squat when accelerating.

What makes the system really intuitive is, that up to speeds of 60 km/h, the A8 uses a camera to search for potholes and bumps on the road ahead, when detected the system kicks in, actively curtailing any road feel in the cabin.

The system can be adjusted by the driver to their personal preference giving more versatility on different driving and road conditions.

A further enhancement is the addition of all-wheel steering on selected A8 models. At speeds up to 60 km/h it turns the rear wheels in the opposite direction to the front wheels by up to five degrees.

At speeds over 60 km/h the system turns the rear wheels in the same direction as the front wheels by up to two degrees. This addition cuts the turning circle down to an impressive 11.4 metres, slashing the turning circle to less than the much smaller A4.

Internally the A8 is leaps and bounds ahead of its predecessor and competitors. The fit and finish is as luxurious as you would expect from a car of this calibre.

Driver’s information is easily read on Audi’s Virtual Cockpit and enhanced by two centrally stacked screens, the upper screen housing the radio controls and maps with the lower operating everything else being controlled by the same gestures as on a smart phone.

The overall look is minimalistic, uncluttered and pleasing to the eye.

Back seat passengers are not left out in the technology field either there’s a rear seat entertainment system offered and a centrally mounted control panel for the climate and seat functions in the armrest.

Audi’s main message at the summit was that they are moving away from being a car company and evolving into a digital car company.

Most of the new technologies announced have now advanced into the Artificial Intelligence (AI) realm. The new A8, according to Audi, is the first Level-3 autonomous car available. 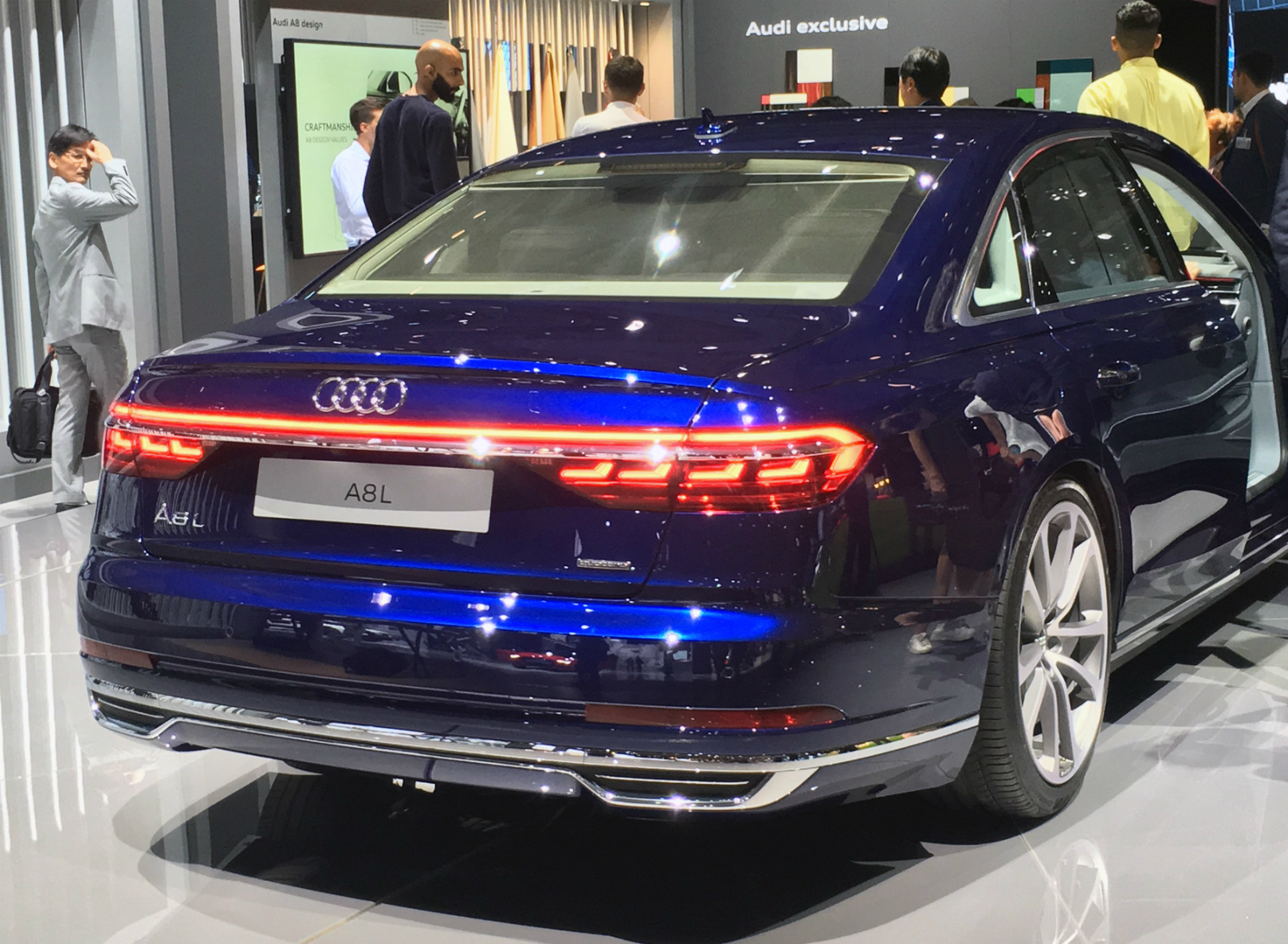 Traffic Jam Pilot is Audi’s label for the level-3 autonomy that will appear on the A8.

By means of a plethora of sensors mounted around the vehicle and a front mounted LiDar (laser scanner) allows the driver to relinquish all control to the vehicle in stop-and-go traffic up to 60km/h.

There are some requirements before the system becomes active – there must be visible lane markings and a barrier that separates opposing traffic.

When traffic surpasses 60 km/h a visual and audible warning informs the driver that they must retake control of the vehicle. Unfortunately Audi have taken the lead a little early with this technology as there is virtually no legislation in place anywhere in the world that will allow full level-3 autonomy to be activated on the road.

The new Audi A8 will be introduced to Canada in early 2018 with pricing being announced shortly beforehand.

Also Read: Autonomous vehicles are closer than you think