The 2017 Audi R8 is a true modern supercar in every respect, combining superb performance, staggering power and interior refinement all in one beautiful package.

One would expect a supercar like Audi’s 2017 R8 Coupe to be a handful to drive.

With 610 hp growling from inside the 5.2-litre V10 engine mounted mid-ship, docile road manners and a comfortable ride are two attributes furthest from your mind as you climb into the cockpit.

Inside, you sit low to the ground, neatly tucked into the highly bolstered, racing-style bucket seats in the R8 V10 Plus model as you punch the big red start/stop button on the steering wheel.

The engine roars to life with a throaty burst, but quiets considerably after a brief warm up.

RELATED: 10 Best Audis of all time 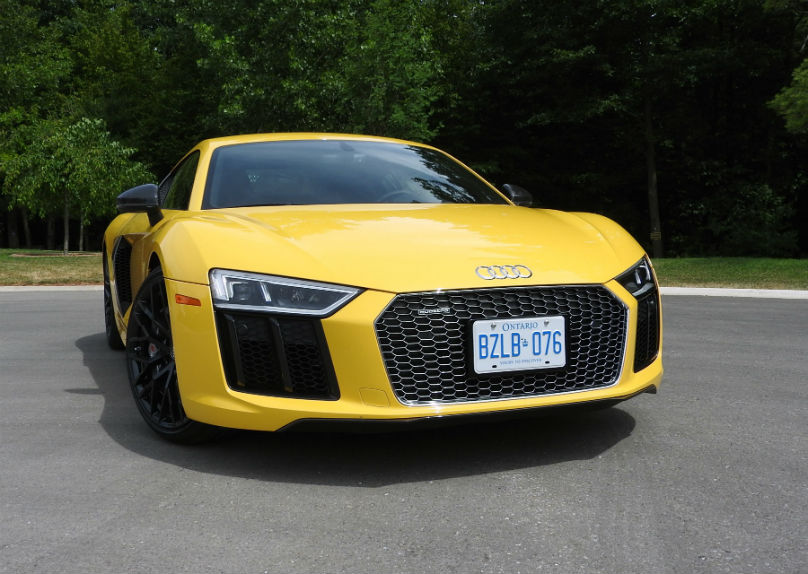 Nudge the shift lever, touch the throttle and the R8 is raring to go, particularly if you engage the checkered-flag performance button on the steering wheel and get set for launch control, a race setting that dials back both stability and traction control functions.

The new R8 is the most powerful Audi production car ever with a 0-100 km/h time of 3.3 seconds for the V10 Plus, but you wouldn’t know it if you take it smooth and easy.

In actuality, this is a really pleasant car to drive in any situation, even in congested urban traffic. The ride is surprising compliant, except on the worst of roads, thanks in part to the optional Audi Magnetic Ride that helps smooth out the rough edges with extra damping. 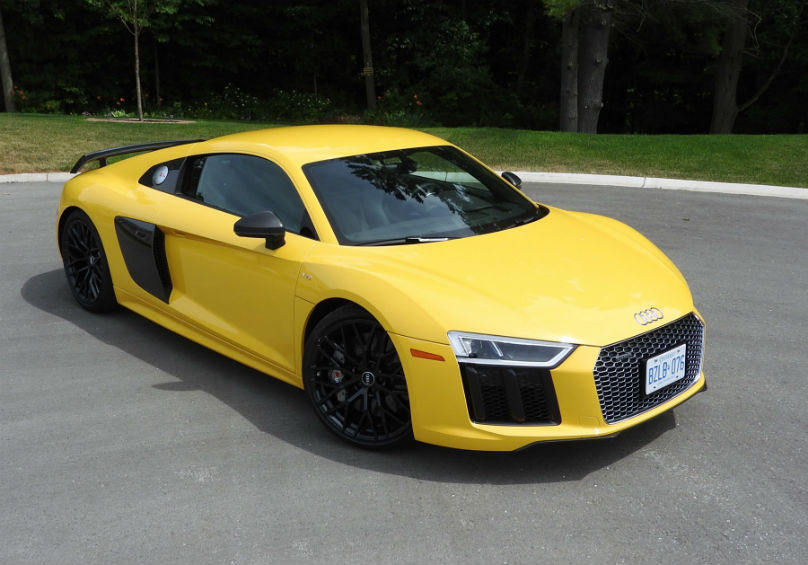 Take it easy if you must, but when you want to let those ponies loose, you know what kind of power is lurking inside the glass-topped engine compartment just behind the driver’s seat.

Of course, at $224,285 as tested, this is far from an everyday vehicle for most buyers.

Those with the scratch for a supercar like this will undoubtedly have one or more other vehicle as a daily driver. But that shouldn’t mean you have to sacrifice comfort just to have superb performance as you do in some other similar cars— with the R8 you get the best of both worlds. 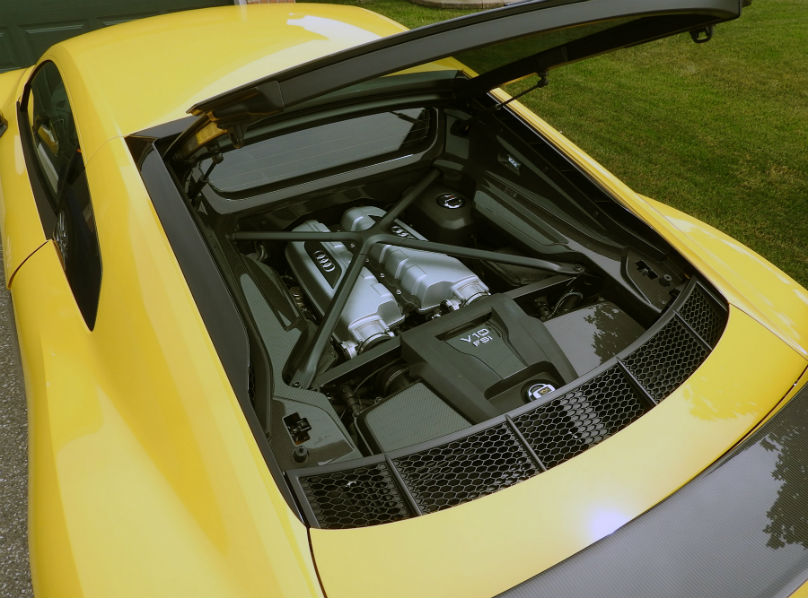 Both models have a seven-speed s-tronic dual-clutch transmission with paddle shifters that feeds power to all four wheels via Audi’s famous quattro all-wheel drive system.

And for those who love to see and be seen, the R8 is one of those vehicles that never fails to attract a crowd.

In our week with the test car, dressed in a brilliant Vegas Yellow paint, we found ourselves the centre of attention wherever we went. 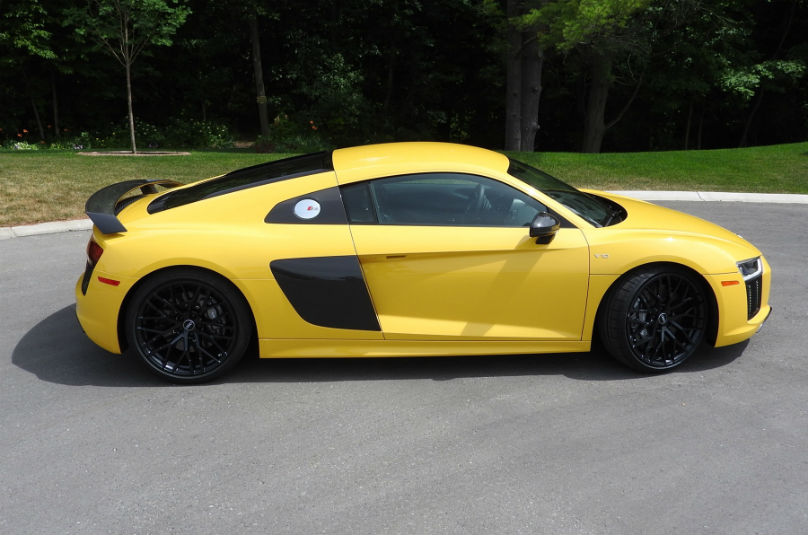 This is the second generation of the R8 and Audi didn’t stray far from the original design. It is striking from any angle as it carries the current Audi design cues across the front bow with a more aggressive look both front and rear. It’s corporate cousin, the Lamborghini Huracan is more “out there” in design, but mechanically very similar as the two cars were developed at the same time.

At a glance you immediately know the cabin-forward R8 is something special with the large distinctive air ducts front and rear and sideblades immediately behind the doors. 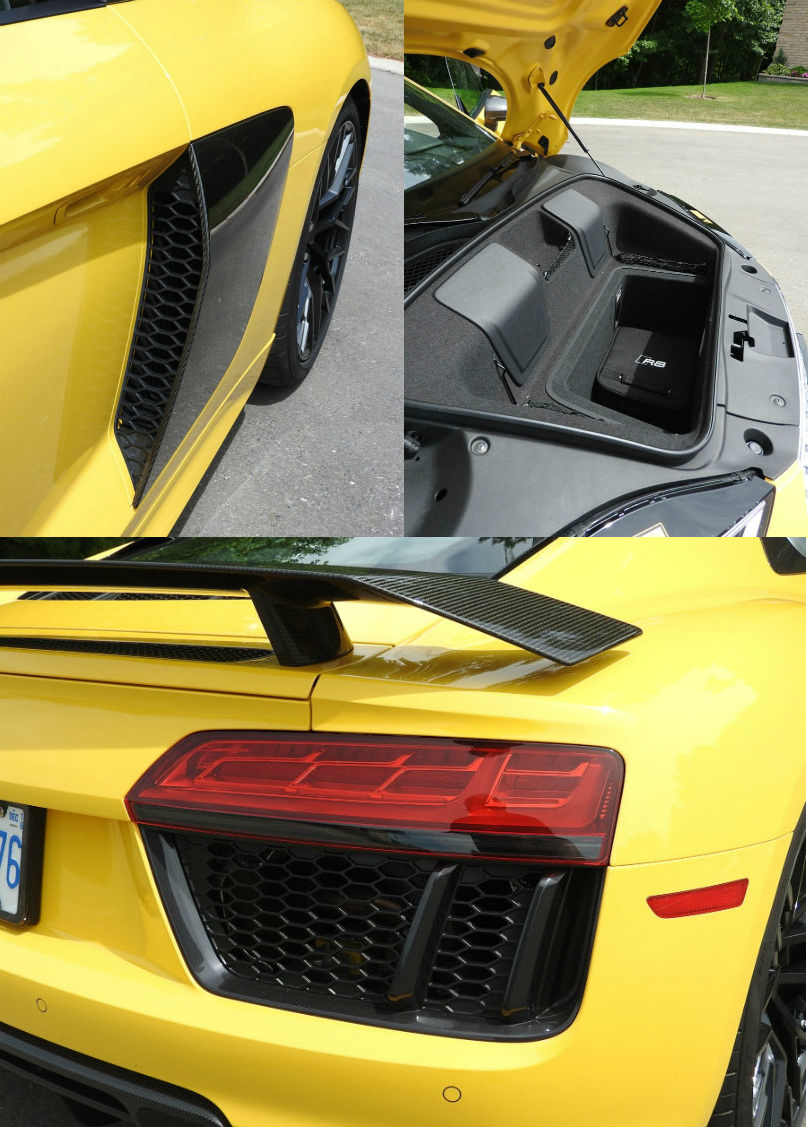 This new model is quicker, lighter and more rigid than the outgoing one.

Audi has used the knowledge it gained on the track, particularly endurance racing, in developing the new R8.

Weight has been reduced to 1,454 kg (3,205 lb) thanks in part to the Audi Space Frame that weighs only 200 kg (440 lb) using 79 per cent aluminum and 13 per cent carbon-fibre reinforced polymer. Meanwhile, torsional rigidity has been improved by 40 per cent.

The cockpit, and you really do feel like you’re in a cockpit, is driver-centric. Like a racecar, the driver can control all-important functions without taking hands off the wheel or eyes off the road. 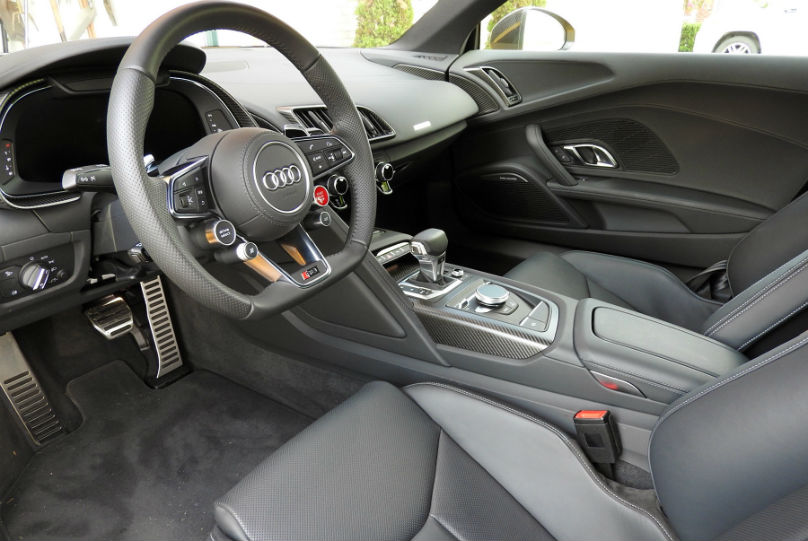 A third button on the steering wheel is for Audi drive select where one can choose from Comfort, Auto, Dynamic and Individual. In each of these modes tweaks are made to the suspension, braking, throttle and steering.

A fourth steering-wheel button switches from normal to a sporty engine sound that is music to the ears of any car aficionado.

Reinforcing the interior theme is a 12.3-inch screen for what Audi calls a virtual cockpit with brilliant graphics directly in front of the driver.

With no other screen, it is the only information source and it can be individually configured, including one view where the gauges flank the navigation map.

In performance view, the tachometer is in the middle with other indicators and gauges around it to monitor torque, power, oil temperature, tire temperature, g-forces and even lap times.

The rest of the cabin is simple, but slick and modern looking with top-shelf materials and first-rate fit and finish. Much of the R8 is hand crafted with as many 250 specially trained personnel working in the German factory where it is produced.

The cars go through 15 cycles, each about 30 minutes in length during the build process.

Carbon fibre is used extensively on the V10 Plus, even for the rear spoiler and other exterior body parts including the side mirrors.

We didn’t get to test the R8 on the track, but on twisty secondary roads it felt as confident and composed as one would expect from a $225K supercar. This is a vehicle that loves to be pushed but with a Jekyl and Hyde personality, it is equally at home on the track or for leisurely drives on the open road.

The 2017 Audi R8 is a true modern supercar in every respect, combining superb performance, staggering power and interior refinement all in one beautiful package. 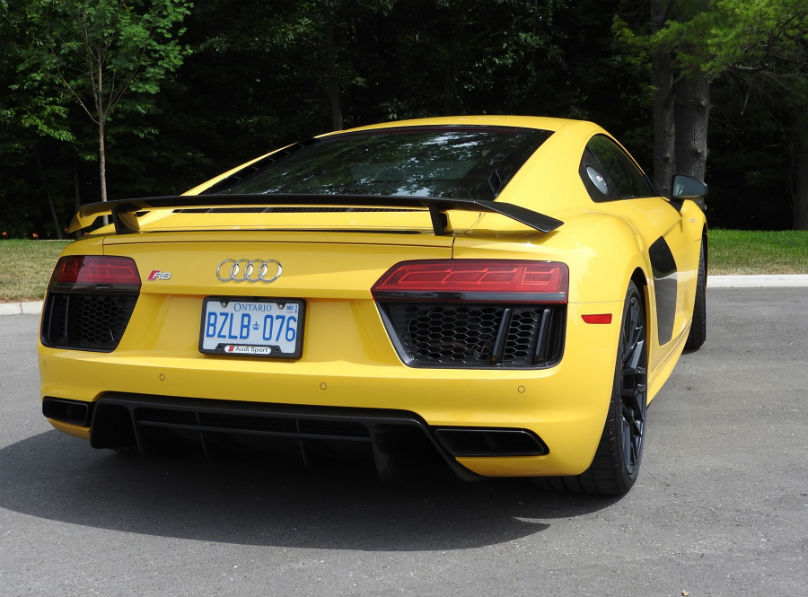 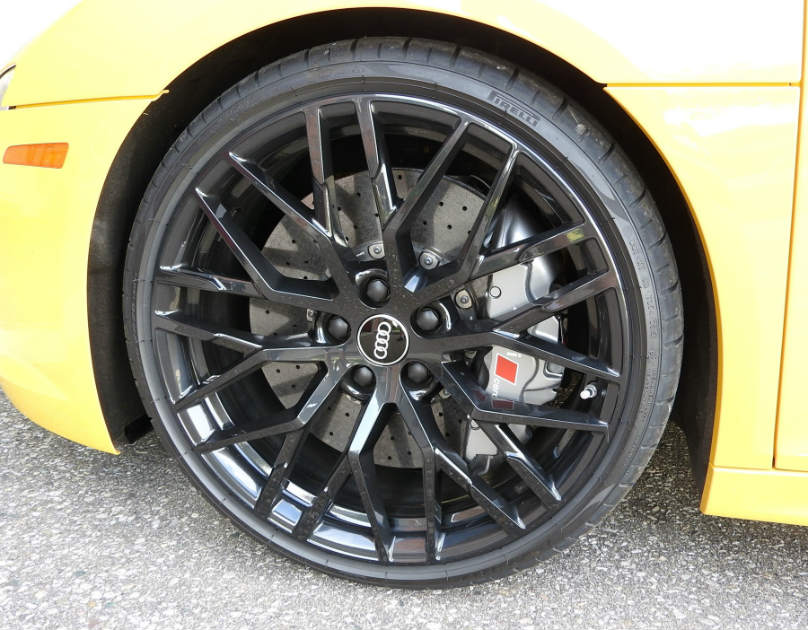