An Escape to the Rockies with Ford's 2017 Escape.

After driving close to 1,000 kilometres within a 24-hour period, it might be safe to offer a tip of the hat to the teams of engineers, product planners and designers involved with this latest iteration.

JASPER, Alberta – When Ford Canada determined that they would launch the 2017 Ford Escape in the heart of the Canadian Rockies, they must have been quite confident that the refreshed/redesigned (potato/potahto) crossover would be more than capable of holding its own against the stunning vistas and backdrops and the magnificence of nature – including spring forays of curious wildlife to the sides of roads under the watchful and seemingly omnipresent presence of forestry personnel. 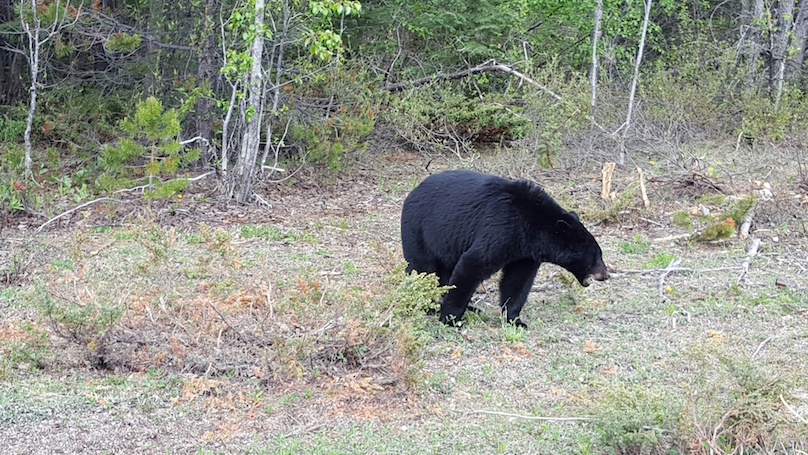 Turns out, they had reason to smile and share this, the fourth generation Escape. After driving close to 1,000 kilometres within a 24-hour period, it might be safe to offer a tip of the hat to the teams of engineers, product planners and designers involved with this latest iteration.

According to Greg Watkins, Product Marketing Manager (SUVs) at Ford Motor Company, Canadians continue to love our UVs – sport utility or crossover – and in the CUV market segment, some 700,000 were sold in Canada alone in 2015. In this country, the Escape has enjoyed its earned status as the segment leader, moving some 47,726 units last year alone. Watkins stated that the volume of crossovers sold last year represents 33% of all vehicles sold in Canada – and by 2020, the expectation is that crossovers will account for 40%. 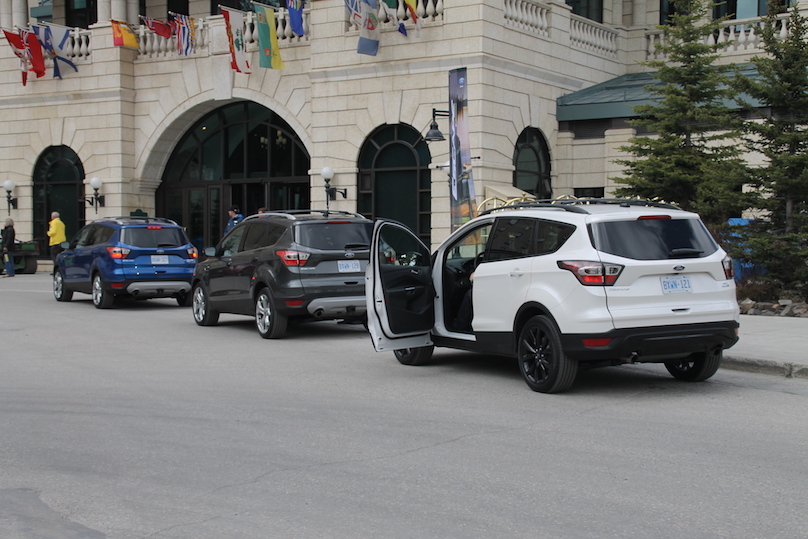 Competition in this category continues to grow. In 2015 there were 25 vehicles that fell under the crossover category and the Escape enjoys a margin of over 5,000 units compared to its closest competition, Toyota RAV4. Interestingly enough, examination of year-over-year sales between calendar 2015 and 2014, the once mighty Escape has seen overall volume drop by some 8.6%.

Is this as a result of complacency – or marked improvements by competitors? One suspects the latter, and that is likely a contributing factor to the changes on the 2017 model.

Ultimately, the buying public will make that decision, and like as not, the common denominator for any marque’s continued success may come down to one factor: what will the monthly payment be?

So how has Ford, specifically the Escape, risen to the challenge from their competition – perceived and otherwise?

While as noted there may be some who refer to this model year as a redesign, in truth it feels more like a substantial refresh. 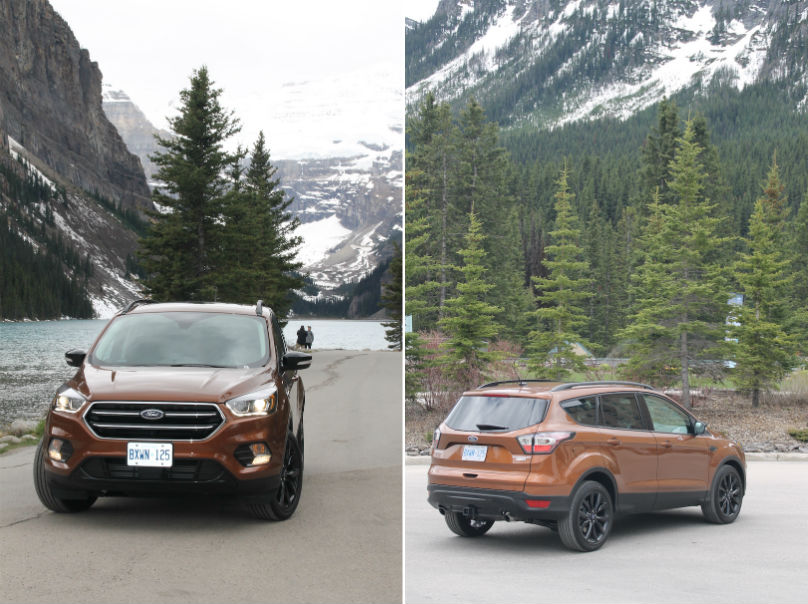 As before, there are three basic levels/finishes – the S, the SE and, the Titanium. It is with the SE and Titanium we experience the biggest change: the availability of two new EcoBoost engines, a 1.5-litre, four cylinder with 179 horsepower and 177 lb.-ft. of torque or an optional 2.0-litre twin-scroll, four-cylinder turbocharged power plant generating 245 horsepower and 275 ft.-lb. of torque on the SE and the 2.0 litre iteration being standard on the Titanium trim. The entry level S, the lowest volume seller retains a 2.5 litre four cylinder engine. Greg Watkins and his team estimate that the SE with the optional turbocharged engine and AWD will be their volume seller.

ALSO READ: Toyota brings a hybrid to the RAV4 lineup

And on that, we would concur. Our drive route from Calgary up to Jasper was, without a doubt, spectacular. The smaller EcoBoost engine, while capable, did not feel there was much left when pushed on long, steep climbs with some altitude. The 2.0 litre version performed like a champ. Before you run for the hills and demand all 2.0 litre, all the time, consider this: describe your typical every day drive. Unlikely you will be driving through mountain passes waving at black bears anytime soon – nor will most owners be towing anything of real significance. It will come down to personal preference – including fuel economy – and, as mentioned before, budget.

From the outside, the overall appearance is a little more rugged, likely with greater appeal to the diverse demographics – millennials and boomers. The front end is now more in keeping with the Ford family appearance and no longer looks adopted. 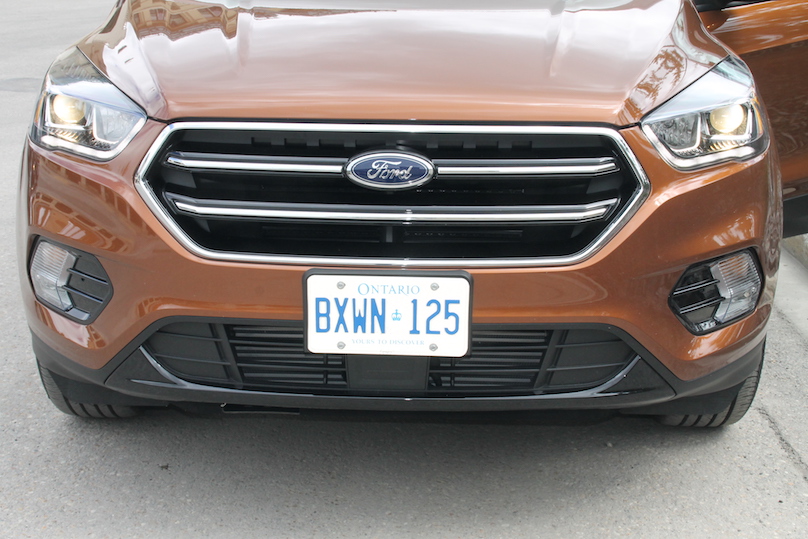 Inside, things have obviously improved, too. General ergonomics are more intuitive and provide the driver – and passengers – with a feeling of greater cabin space and more thought has been given to softer materials, an electronic brake, greater console space and flexibility: plus, a shift lever positioned where it should have been years ago.

The cabin had a feeling of airiness and abundant space – assisted no doubt by the crisp, spring weather experienced during our drive. Skies seemed bluer, clouds fluffier and lighter and lakes a fantastic hard-to-describe blue-green. The only shortfall were the seat cushions up front; while driving was quite comfortable and reasonably effortless, slightly longer seat cushions would have been appreciated. 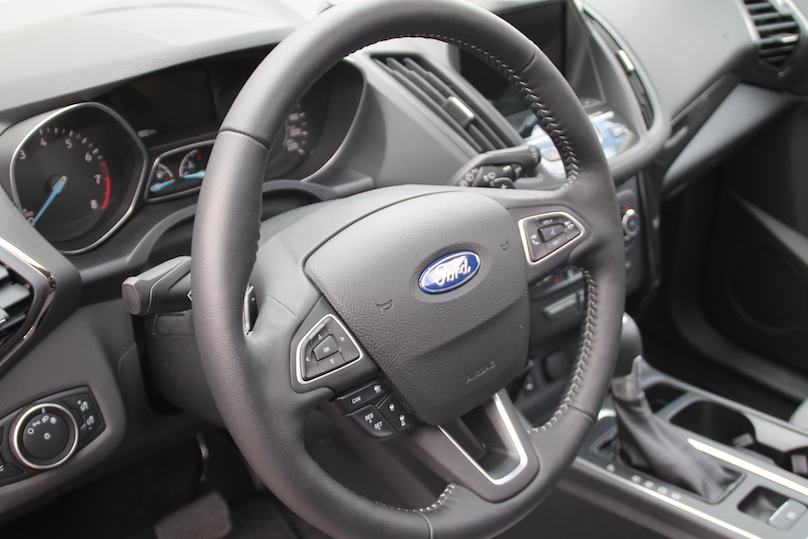 Ford’s designers and engineers have obviously compared notes for the Edge and the Explorer. Further, with the continued competitive pressure being applied by Asian manufacturers pushing the value add envelope, Ford have responded quite well to the challenge.

For the 2017 model year, the Escape’s on-board technology takes a back seat to no-one. We were able to experience the debut of Sync 3 Connect – a much improved version of the often maligned MyFord Touch. Standard on the top-of-the-line Titanium trim and available with the tech Package on the SE, the new Sync 3 connectivity suite has something for all users – Apple CarPlay, Android Auto and the as yet unsung Fordpass app which enables an individual’s smartphone to access fuel levels, provides the user the ability to initiate a remote start, lock or unlock doors and will even track your vehicle. At present, there is no built-in Wi-Fi hotspot – an issue that Ford’s Watkins addressed, stating most smartphones have the ability to be “made” into a hotspot in a minute or two anyway.

Further tech available in the Titanium include lane keeping assist, park assist, multiple driver alerts – including identifying objects strewn on the road – and, for improved fuel economy when you pull over roadside to admire grazing bears, auto stop/start.

So, will Ford continue leading the way in this competitive category? Time and economics will tell. As a company, they have made a concerted effort to appeal to new and existing customers alike, and show a willingness to not only adapt, but innovate, too.