A8 Transcends Audi into the Future

Preview: The 2019 Audi A8 is arguably the most advanced vehicle on the road today and is the first to be produced capable of Level 3 autonomous driving.

VALENCIA, Spain: You’re driving along in your Audi A8 when it “sees” a gaping pothole ahead.

Before you can react, the A8 has analyzed the threat and prepared the suspension, both front and rear, for the force of the impact and made adjustments to minimize disruption in the cabin.

And that’s just a fraction of the astounding technology in the fourth-generation A8 Audi flagship sedan coming to Canada next summer as a 2019 model.

In fact, there is so much going on in the new A8, that driving it is almost secondary. 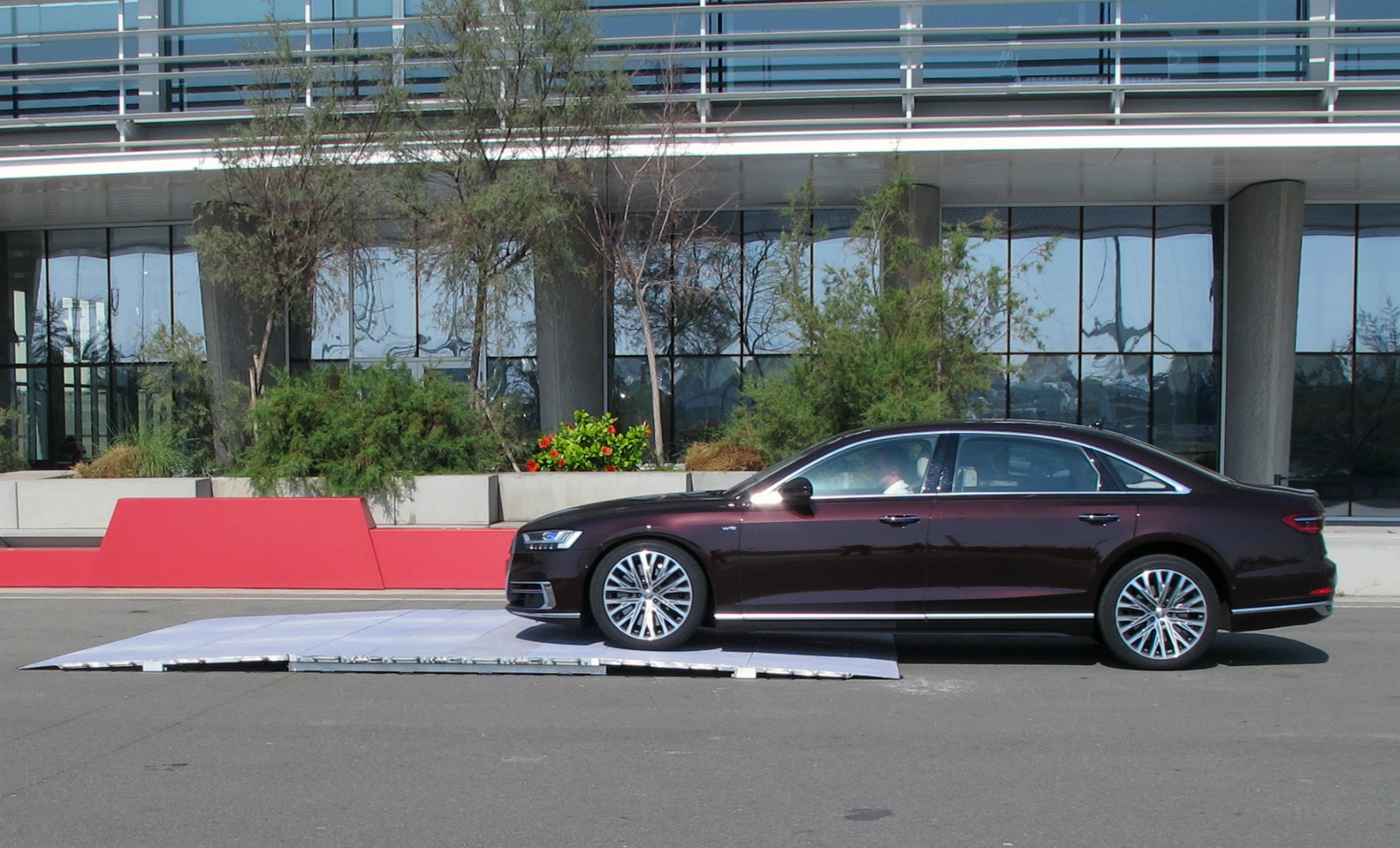 As a result, I will be dealing with the breadth of technology separately in coming weeks, including its entry to the realm of Level-3 autonomous driving with Audi’s AI (Artificial Intelligence) system.

I don’t think I’ve ever had more information to comprehend in one day than the A8 media preview in Valencia.

It started at the first presentation with journalists seated at a long, white conference table which turned out to be a “screen” for an overhead 3D matrix projection system that, among other things, let me choose from a variety of meals by just pressing on the table top.

And it went up-tech from there. 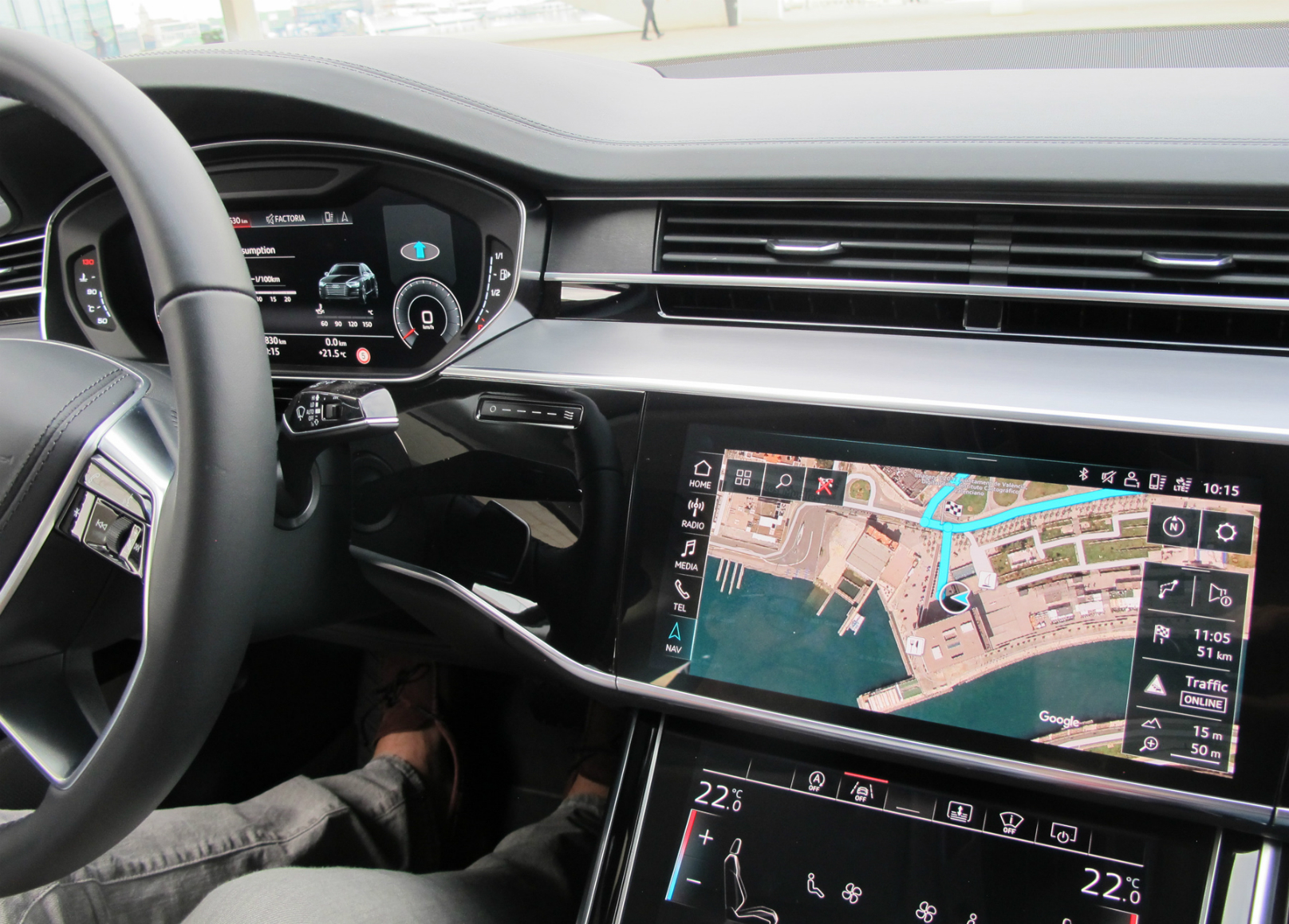 When I started chronicling cars many years ago, the vehicle was about the engine, drivetrain, options and how it drove. The A8 makes all this something of an afterthought.

Expected in the future is a plug-in hybrid version with a 3.0-litre twin turbo, direct injection V8 and electric motor mounted between the engine and transmission and 14.1 kWh lithium-ion battery for a hefty 449 hp and 516 lb/ft of torque, thus endowing it with an all-electric range of up to 50 km with an electric top speed of 135 km/h.

Interestingly, all A8s sedans are “mild” hybrids, thanks to a 48-volt electrical system that does away with the 12-volt system that has been around since the dawn of the automobile.

This allows for “engine off” coasting, increased start/stop operation and kinetic energy recuperation under braking made possible by a belt driven starter/alternator. With its standard lithium-ion battery, speeds of 55-160 km/h are possible on electric only.

Adaptive air suspension with four ride heights is standard. One of the Audi breakthroughs is its optional A1 “Active” suspension with load-levelling air springs and electric motors, mounted on each corner. They power the left and right halves of the anti-roll bar independently with no connection between each side. 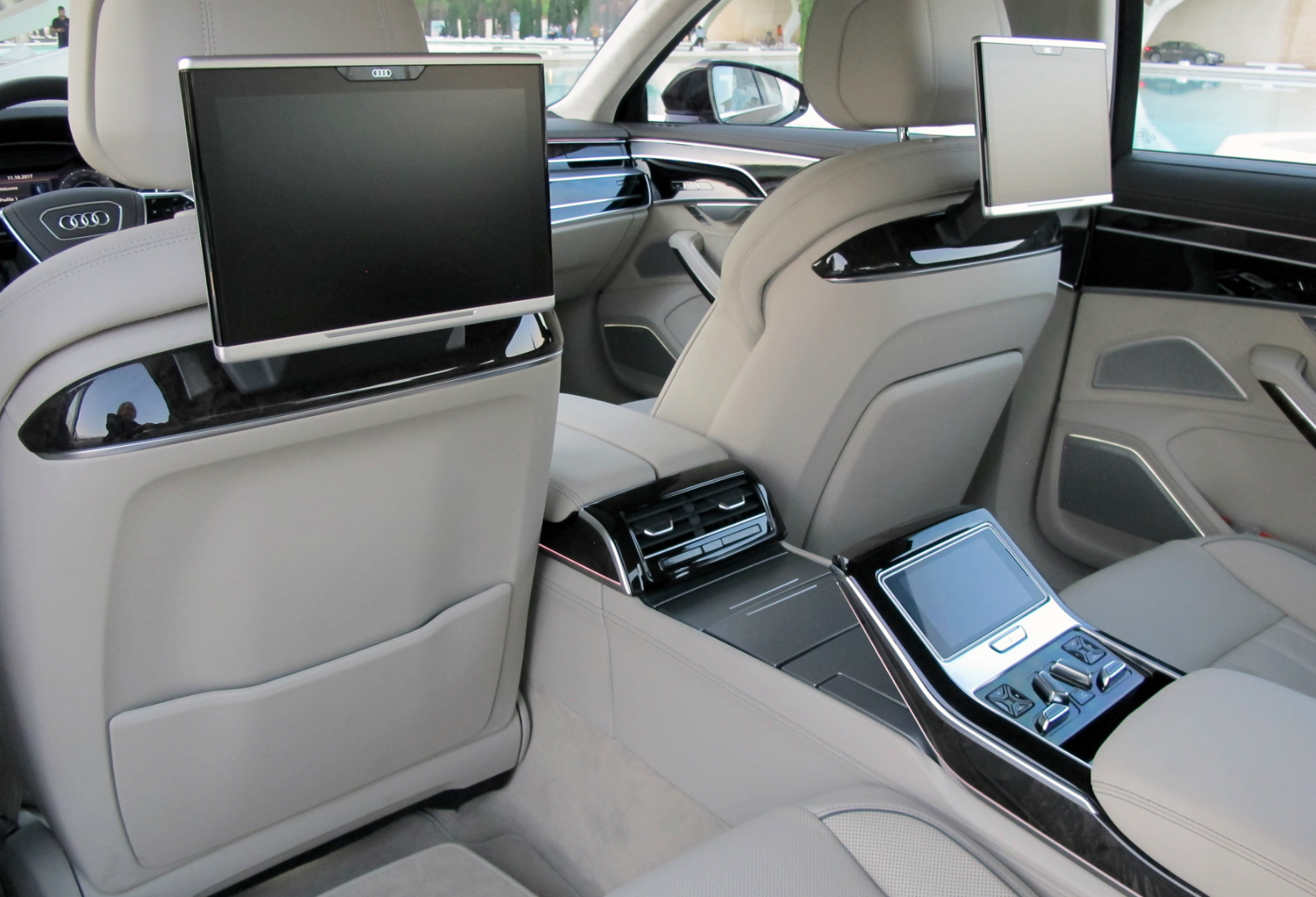 High above Valencia where the media preview was held, we cruised up into the hills and orange groves for which the region is famous.

We were in a 3.0-litre A8L similar to what we will get next summer and the narrow mountain roads, switchbacks and hoards of cyclists (it was a national holiday) would have been a challenge to any vehicle.

Ascending or passing, the twin-turbo was quick to respond and the brakes were better, but it was the standard air suspension – again – that made the difference.

Going over humps and bumps in the road, the A8 cabin staying unerringly flat with no real sense of pitch and yaw. 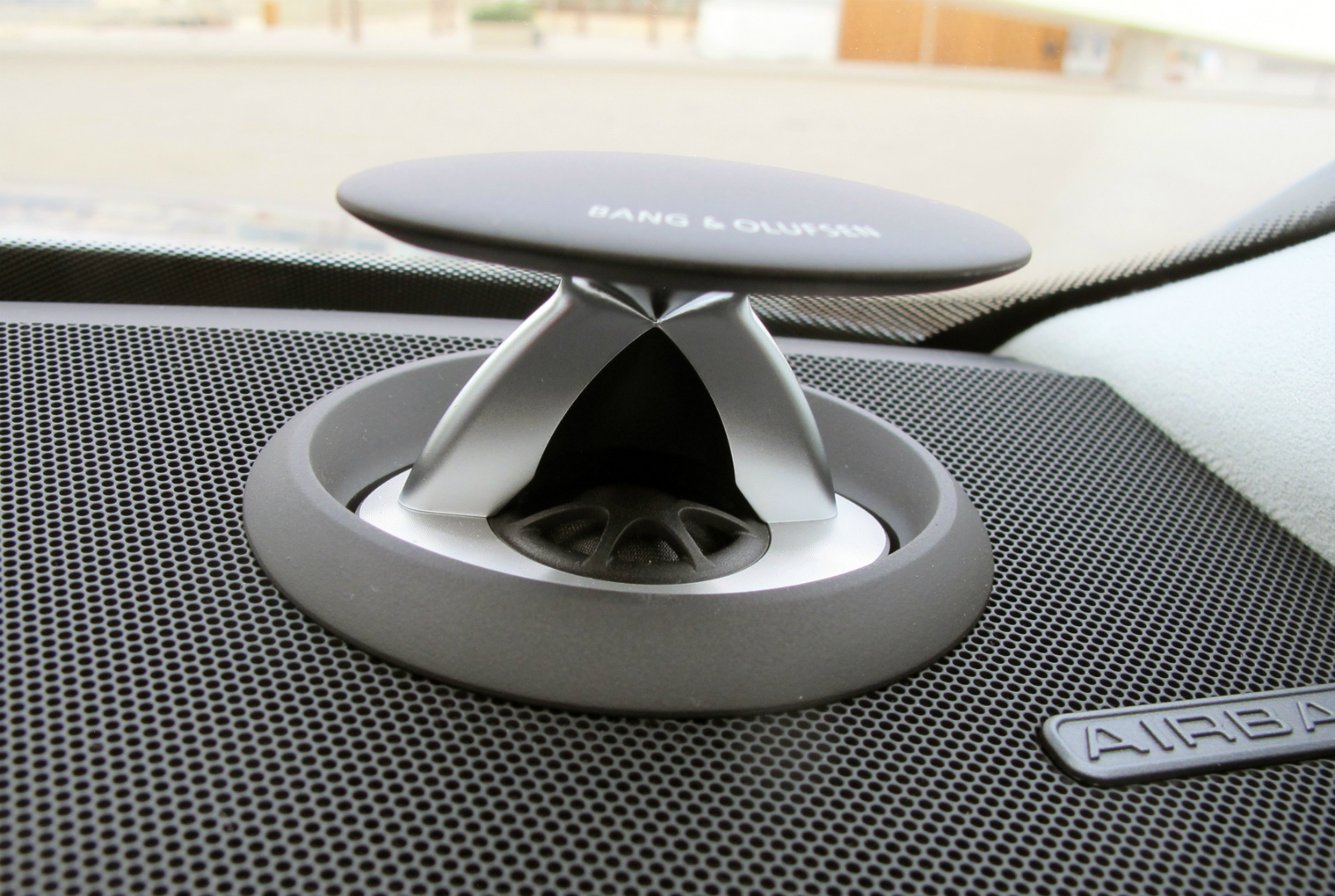 With the standard Audi Virtual Cockpit, you are greeted by the A8’s noticeable lack of buttons, knobs and toggles with the entire instrument panel looking like one piece of piano black – but it’s not.

As soon as the car is opened the panel reveals itself to be a centre 10.1-inch touchscreen for all the infotainment functions, while a second conjoined touchscreen on the centre console handles things such as air conditioning and comfort and enables text inputs.

Activations can also be made via a new, natural form of voice control.

Information on destinations and media is either available on board or is delivered from the cloud at ultra-fast LTE speed. 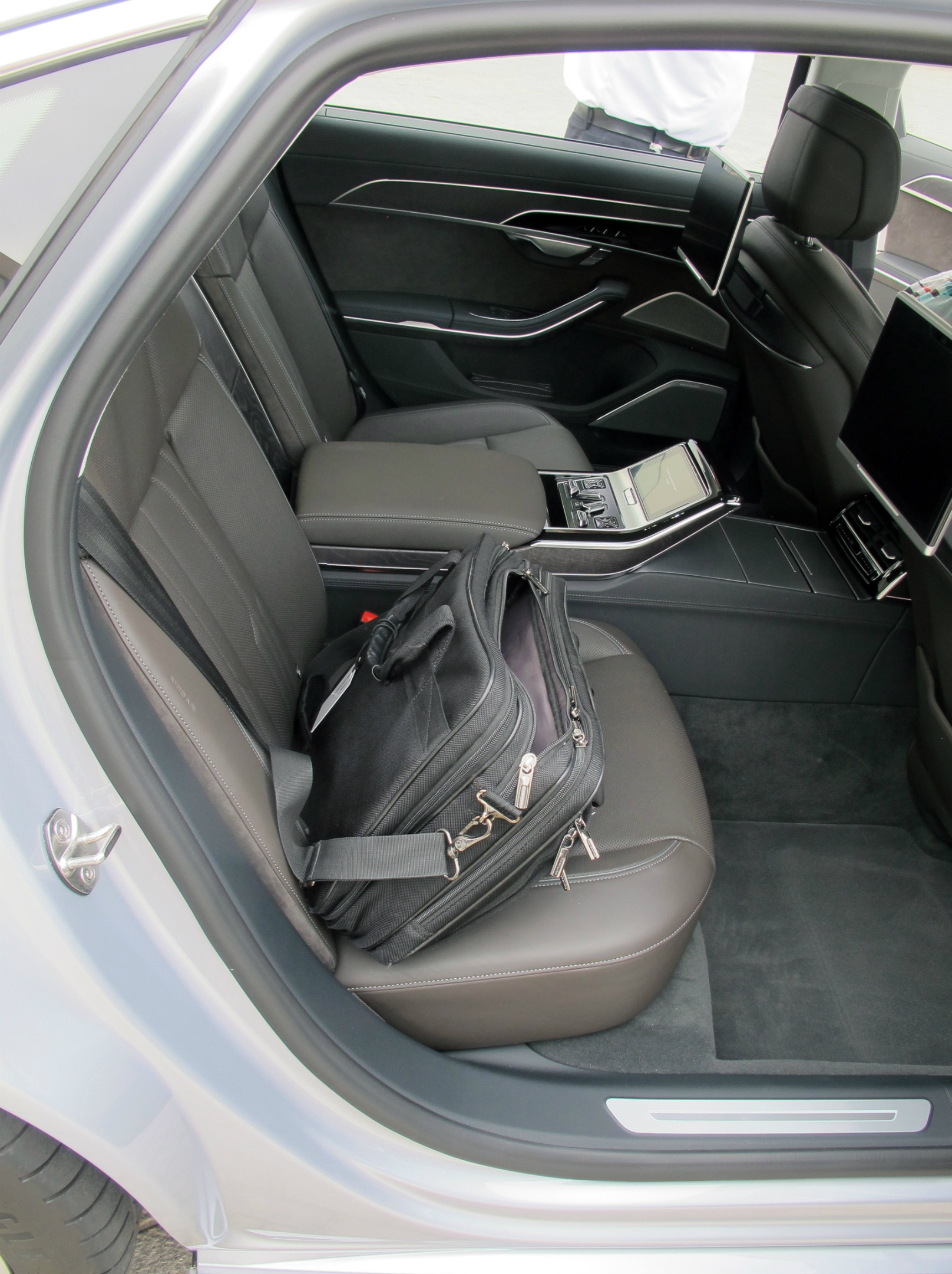 But the best seats in the house are probably in the back where passengers have individual screens and a central control panel where they set the ambient lighting, seat massage and recline. The rear seat remote control, with its smartphone-size OLED display, is a removable unit housed in the centre armrest.

The 2019 Audi A8 is an astounding advance any way you look at it and one destined to be the harbinger of change for the auto industry.