Subaru is already an outdoorsy brand, and its Outback compact SUV that tackles mainstream Canadian sales heavyweights like the Toyota RAV4 was originally born in the mid-1990s by adding lower body cladding, more ground clearance and an extra dash of off-road ability to Subaru’s five-door Legacy wagon. But the company also sees itself as somewhat of a four-season sporting brand, given the standard all-wheel drive of most of its models (outside its rear-drive sport coupes), with a performance edge in particular to its rally-bred WRX models.

For 2022, the Japanese company is updating its Outback SUV with a new trim level that offers stronger off-road flavour than ever, dubbed the Outback Wilderness. It will be the first in a line of new Subaru Wilderness models, aimed at more mud-slinging rivals like the RAV4 TRD Off-Road and the Jeep Cherokee Trailhawk, though staying much closer to WRX-worthy on-road power and handling levels.

Essentially, this first Wilderness model will out-outback the Outback.

It will provide some design clues to its new off-road prowess, plus underbody protection for those buyers that actually may encounter muddy trails, bumper-level water, and undercarriage-threatening rocks, as we did in the surprisingly challenging trail portion of the Canadian launch of the all-new Outback Wilderness. 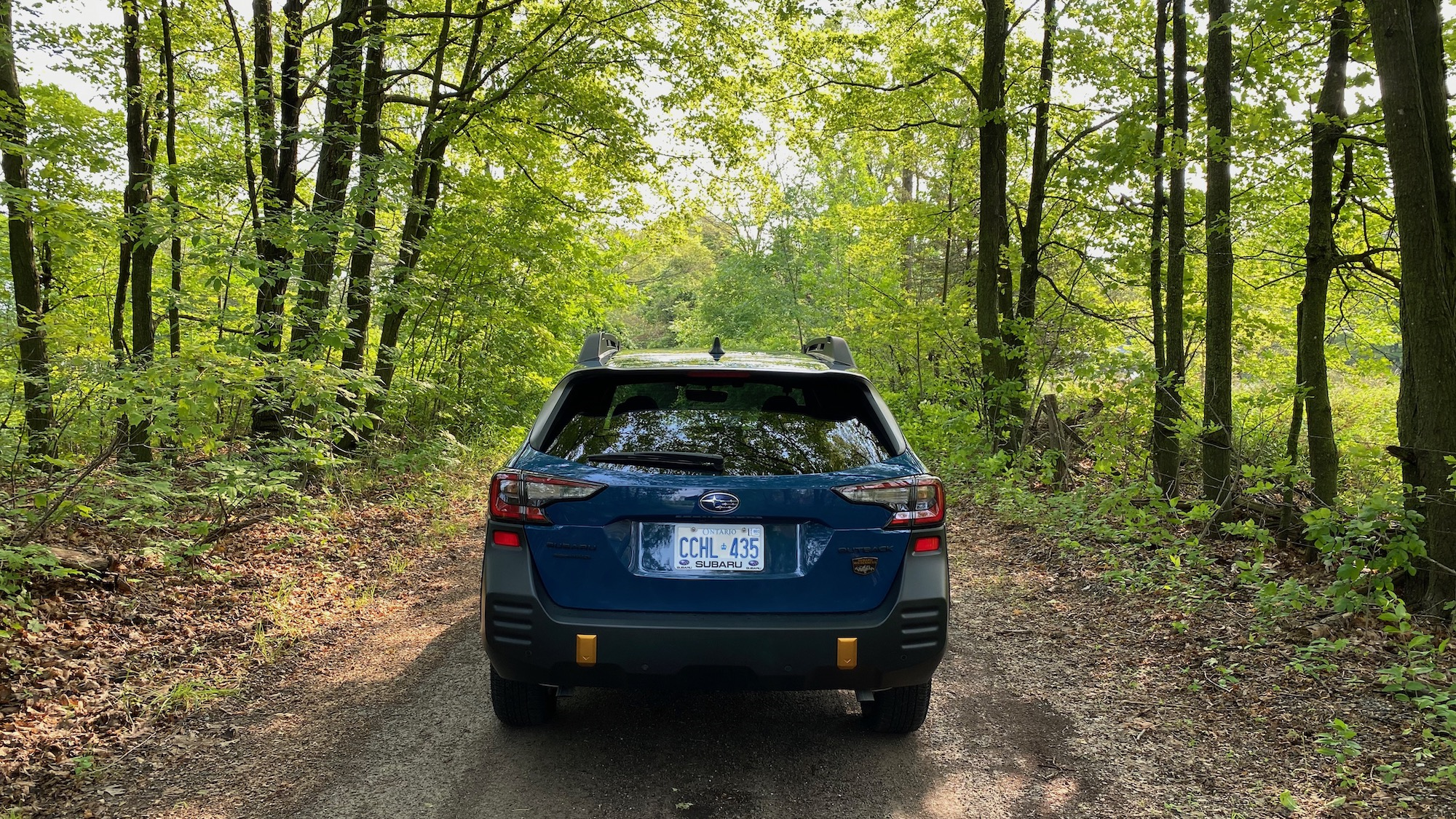 Visually, the Outback Wilderness can be spotted easily by its copper accents in the bumpers, roof rails, plus black wheels and a matte-black hood decal. And prominent Wilderness badges on the fenders and rear tailgate, as well as in the front floormats – clearly, Subaru has big plans for this badge.

There’s no doubt the Outback Wilderness looks more aggressive, standing two centimetres taller than other Outback models, with its more prominent roof rails adding extra load capacity: up to 100 kg while moving, and rated to 301 kg while parked, allowing for roof-mounted tenting, said Subaru. It looks as good to these eyes as its RAV4 TRD Off-Road rival, though the Cherokee Trackhawk did do the matte hood accent first.

Those ‘copper’ accents morph into more golden-orange accents inside, found prominently on the steering wheel and shifter knob, in the stitching, and up high on the door sill in what looks like a golden-orange ‘Subaru Wilderness’ clothes label. This may not please Volvo or Polestar brand interior designers, because it’s very close to the colour of the deep yellow seatbelts used as a signature colour in their performance versions.

The steering wheel is busy with buttons and controls, but for good reason, with the radio, phone and advanced adaptive cruise control functions all very easy to intuitively control from it. 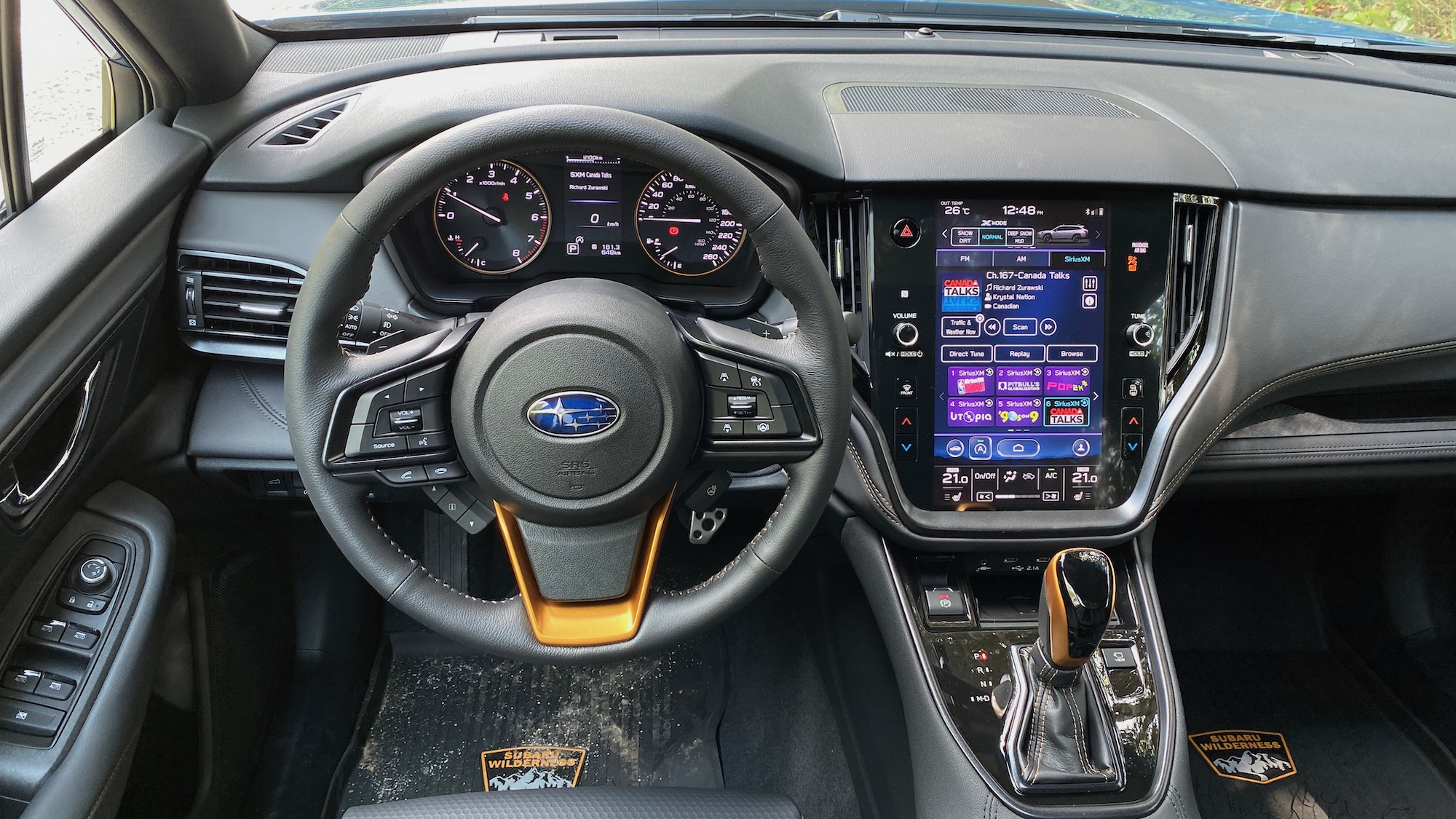 Near the shifter, there’s a View button that provides the camera view of the front bumper at low speeds. It works well in tricky parking situations and drive-through fast-food lanes, though the system has a tougher time providing high-definition guidance on off-road trails while delicately avoiding jagged obstacles. The increasingly common 360-degree camera view around the entire vehicle would be even more useful in all these areas though. Especially in this near top-grade Outback that starts (and largely ends) at a starting price of $41,995.

The Outback Wilderness has a rear seat that’s sizeable and comfortable, with rubberized mats that deal well with mud and dog hair alike, rear heated seats to go with the heated fronts, plus two USB chargers. The cargo area is massive: nice and flat and wide, and among the largest in its class, and also with a rubberized covering for easier cleaning.

The WRX side of the Subaru family DNA comes through on the road, especially on the plentiful curves just outside of Kingston, Ontario, where the Wilderness handles admirably, staying relatively flat when pushed, even with its higher body, all-terrain tires and off-road-oriented suspensions tuning. 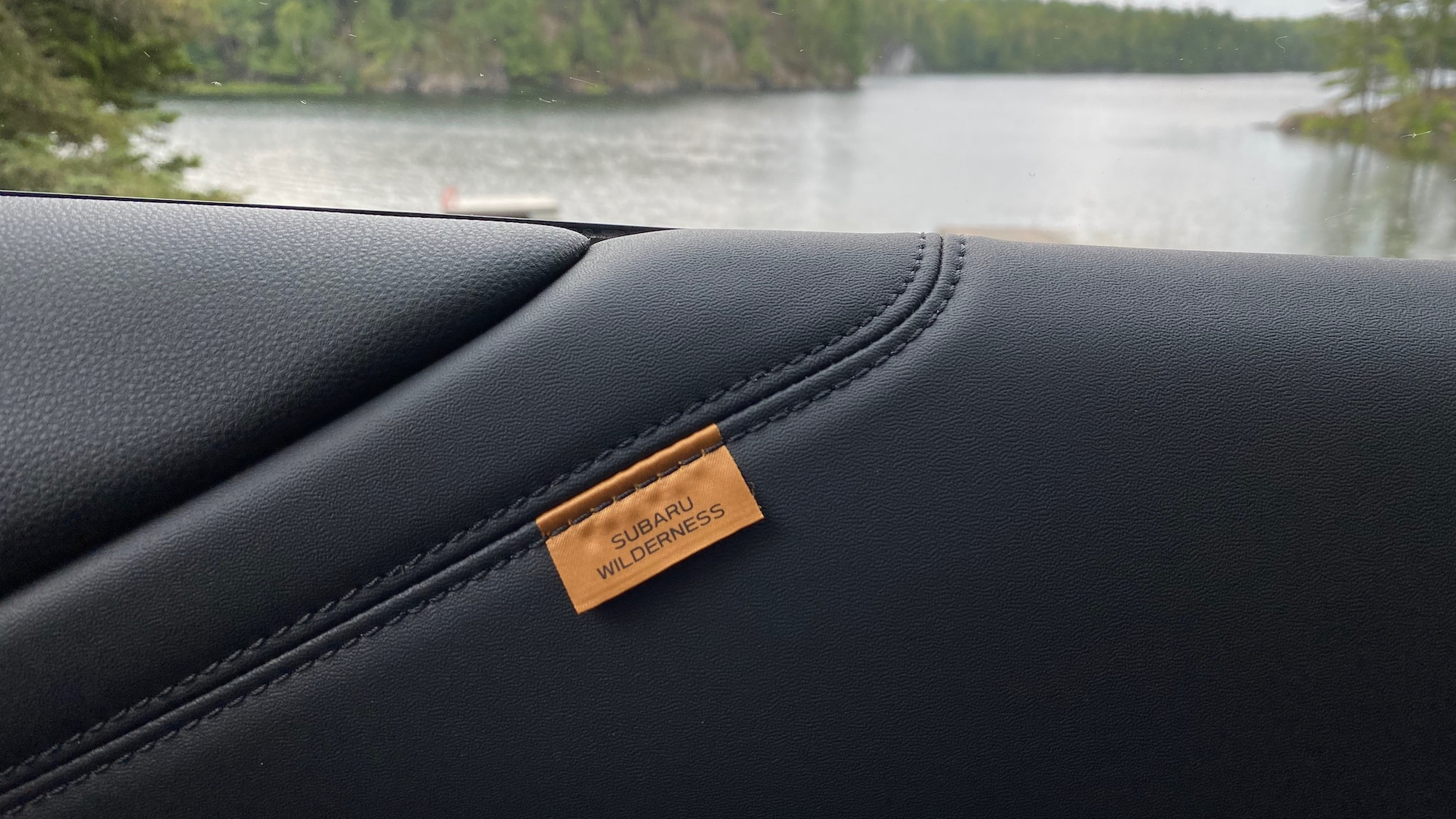 The turbocharged 2.4-litre flat four engine in the Outback Wilderness is not a variation of the WRX’s well-regarded 2.0-litre turbo four but is the same one used in Subaru’s largest three-row Ascent SUV. This Wilderness model’s 260 hp is near equal to the WRX’s 268 hp, but the wilder Outback busts out an impressive total of 277 lb-ft of torque, which actually outdoes the 258 lb-ft of the WRX.

The level of power puts the Wilderness right up there at the front of this niche off-roading class. Flooring the throttle provides a brisk response, if obviously not quite the sport sedan rush of the lighter WRX. Subaru also concedes that the shorter gearing, raised suspension and all-terrain tires more suited to mud and snow tackling also make the Wilderness the least fuel-efficient Outback, with official consumption figures of 10/9 L/100 km in the city, and 8.9 on the highway on regular fuel, though these figures are still roughly mid-pack in this thirstier class.

Further emphasizing the on-road sporting side to its personality, there are even shift paddles and a manual mode to the transmission, even though it’s still a continuously variable unit (CVT), like all Outbacks. The display though will still show eight simulated gears: a paddle ‘downshift’ doesn’t feel quite as gratifying as a real shift, but does help it feel more engaging overall. 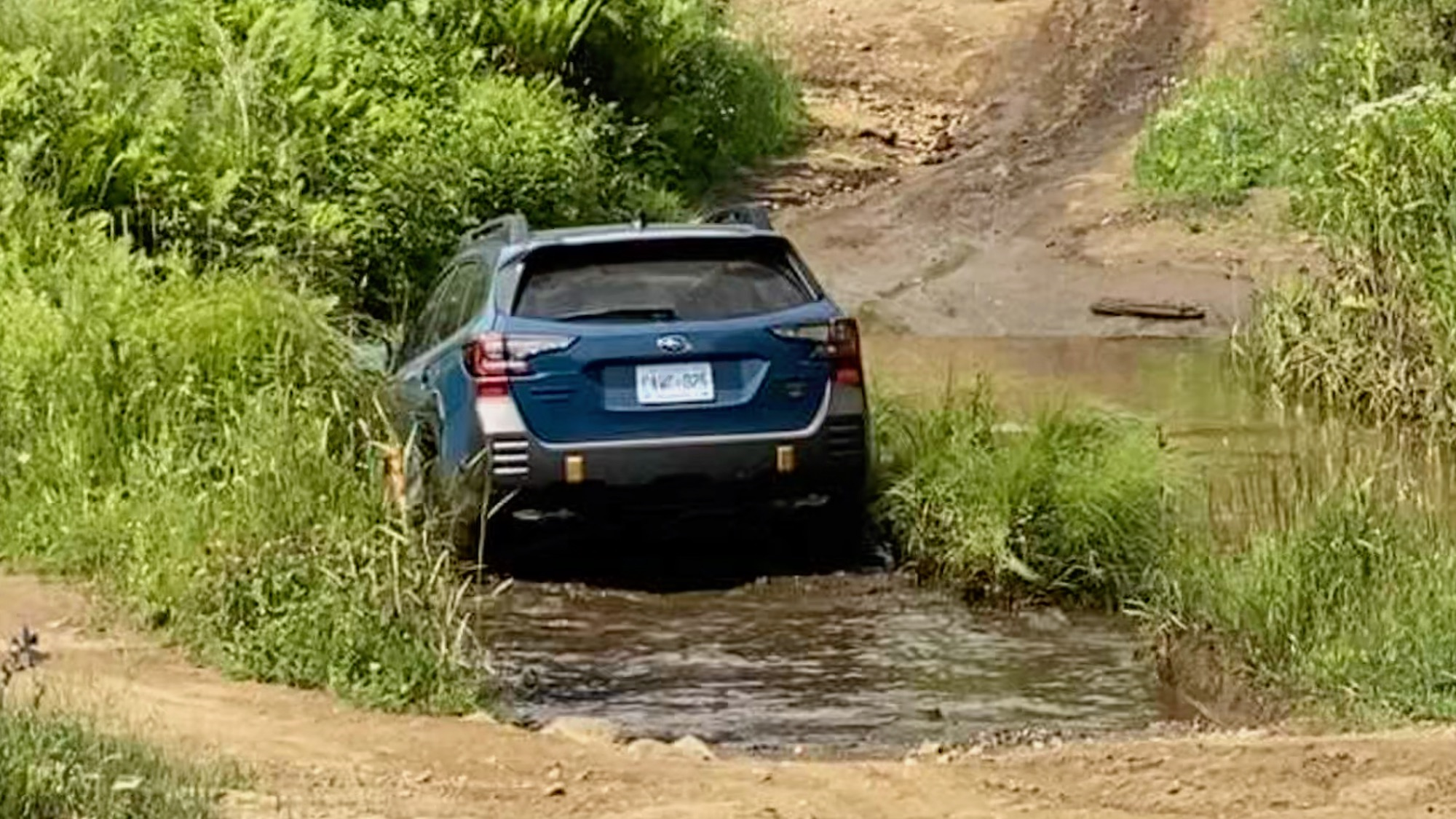 Less satisfying was the auto-stop system, which turned off the engine at red lights with an occasionally unrefined shudder.

On the muddy off-road course set up on trails that had just been poured on the previous evening, the Outback Wilderness never set a foot wrong, even on bumpy and water-logged ditches full of knee-deep (and occasionally deeper) muddy water. Watching other drivers traverse one particularly deep ‘puddle,’ the Wilderness’ nose would dip down to be briefly fully submerged, even when we heeded the warning not to go too fast through the higher-than-anticipated water levels.

At that point, you can’t see the rocks underneath, so we are very thankful for the extra underbody skid plate protection for the engine, transmission, rear differential, and other front underbody bits. Its extra 20mm of ground clearance likely saved the underside from even more punishment. And once out of the water, the raised body and more extreme approach and departure angles also helped avoid any bottoming out on this challenging course, which was more extreme than we typically see at anything outside a Jeep or Land Rover event.

In the end, the Outback Wilderness pushes more to the outdoorsy side of Subaru’s DNA more than ever, without going full hardcore off-roader to the point where it means sloppy on-road handling or lots of extra noise from knobby tires. 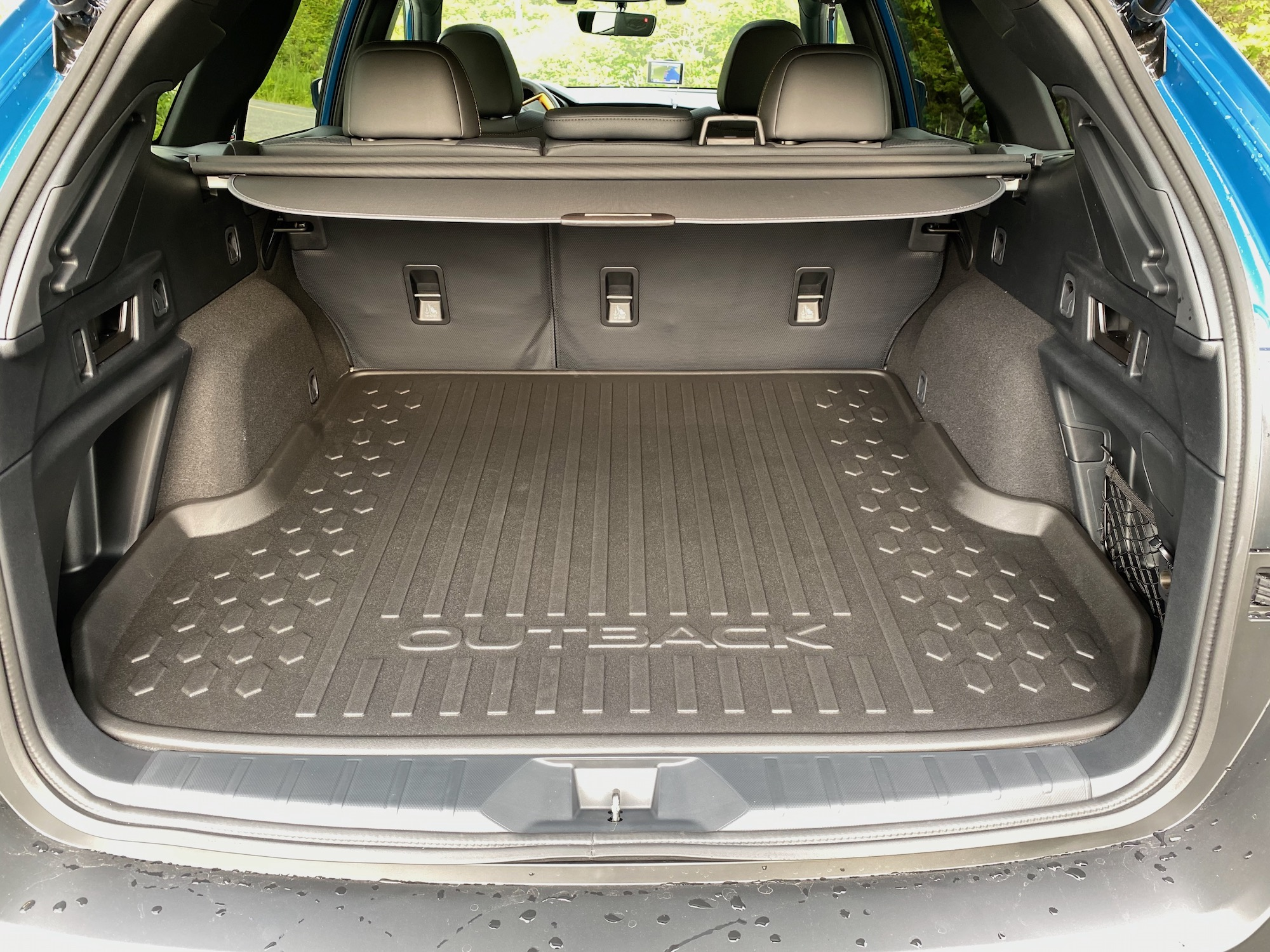 At $42k and roughly equal to the Outback Limited XT trim with the same engine without the extra off-road bits and tuning, the Outback Wilderness represents fairly good value in its class and in the Outback lineup. Like many Subarus, dealer supply is tight, and will likely remain that way for the foreseeable future, according to Subaru Canada vice-president of product and marketing Ted Lalka.

So there may still be issues finding one as soon as buyers may hope, or in the exact colour you want. But if you’re looking for a spacious and off-road capable SUV, and not as concerned about fuel efficiency or the latest/greenest powertrain technology as you are about an engaging driving experience, the 2022 Outback Wilderness heralds the beginning of an increasingly wild era for Subaru vehicles, and well worth a test drive. 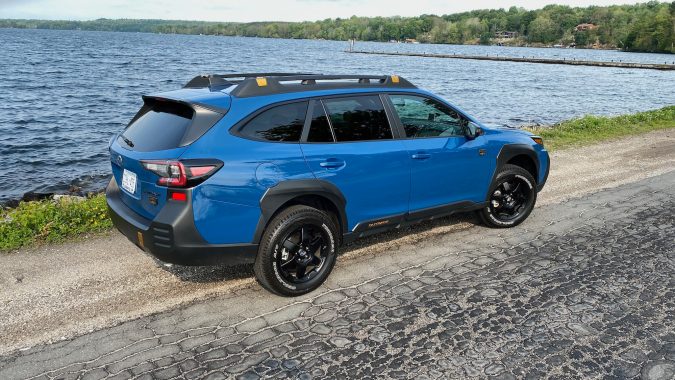 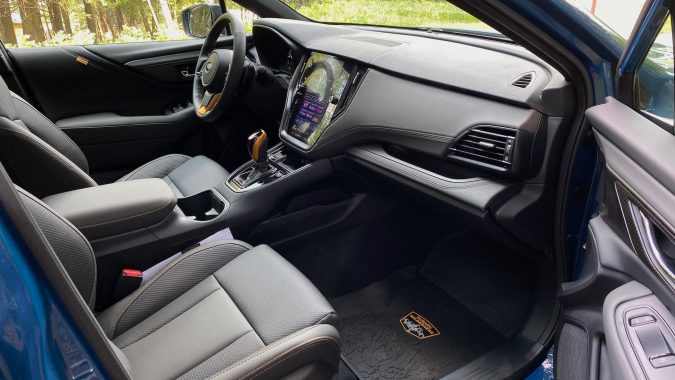 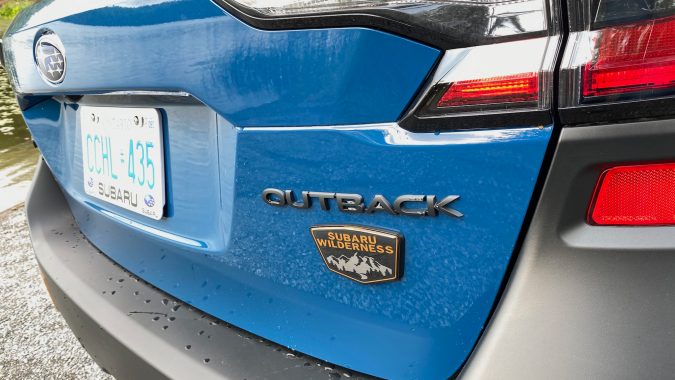 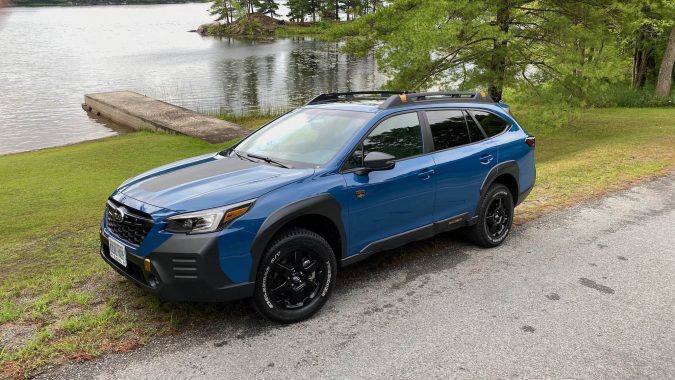 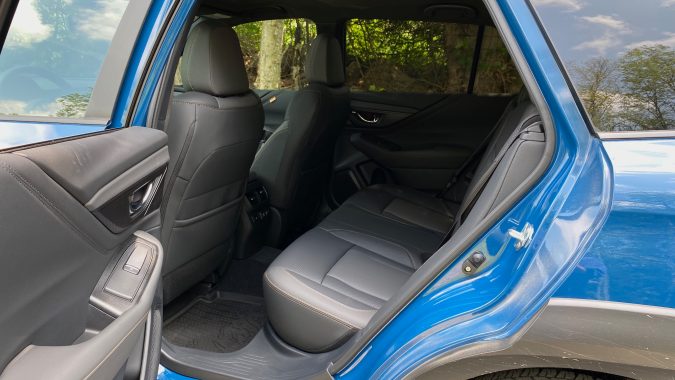 PRICE: $41,995, not including destination fees, taxes and accessories