In case you haven’t being paying attention, I have news. Volkswagen, once the purveyor of quirky, fun cars such as the Beetle, Scirocco and Golf, is now firmly a brand of – wait for it – SUVs.

Now, to be clear, the Wolfsburg-based auto giant still sells the Golf family of compact hatchbacks outside of North America and, yes, we will get all-new 2022 versions of the spicier variants (GTI, Golf R) later this year but, as is the case for many automakers these days, cars just don’t carry the mail anymore.

Sales of the compact Jetta sedan have declined by almost two thirds since 2015, figures for the Passat mid-size barely cleared 1,700 units in Canada in 2020 despite a design update, and the sleek and sexy Arteon four-door, which I recently reviewed, barely registers with a few hundred sold per year. (Volkswagen Arteon).

Similar story. Sales declined by two thirds in the U.S. between 2017 and 2020, which convinced Volkswagen of America to pull the plug, ultimately forcing Canada to follow suit. Without U.S. volumes, importing and adapting cars, for emissions and safety, for Canada’s small market is prohibitively expensive for a manufacturer. The GTI and Golf R being spared is a partial victory, but they had better sell, otherwise it’s probably curtains for them too.

So, into the sales breach a growing number of SUVs have been cast. On its Canadian consumer website, Volkswagen has grouped its utilities into a section entitled ‘our SUVW family’. Clever.

Clicking on this tab takes visitors to a page where Volkswagen’s four gas-powered SUVs are gathered: Taos, Tiguan, Atlas Cross Sport and Atlas. A fifth, the pure electric ID.4, has its own page.

The focus here is the Atlas Cross Sport, the sportier version of the mid-size Atlas. The latter debuted in 2017, while the former went on sale last year as an all-new 2020. Both models ride on Volkswagen’s MQB (modular transverse matrix) platform, share similar styling and powertrains, and are built in the company’s Chattanooga, Tenn. plant.

Dimensionally, the Cross Sport is smaller, but not by much. Wheelbase (2,980 mm) and width (1,990 mm) are identical, but the Atlas is longer (+131 mm) and taller (48 mm). On the inside, the boxier dimensions of the Atlas give it about 500 extra litres of cargo space, but the Cross Sport’s maximum volume is generous (2,203 litres) for a five-seater.

In terms of powertrains, like the Atlas, the Cross Sport can be had with either a 2.0-litre turbocharged 4-cylinder (235 hp /258 lb-ft) or a 3.6-litre V6 (276 hp / 266 lb-ft), both of which are paired with an eight-speed automatic transmission and standard 4MOTION all-wheel drive.

Four grades are offered in Canada: Trendline, Comfortline, Highline and Execline. Both engines are available on all grades, apart from the base Trendline which comes with the 2.0-litre only. The V6 is a $2,200 option on the other three trims. 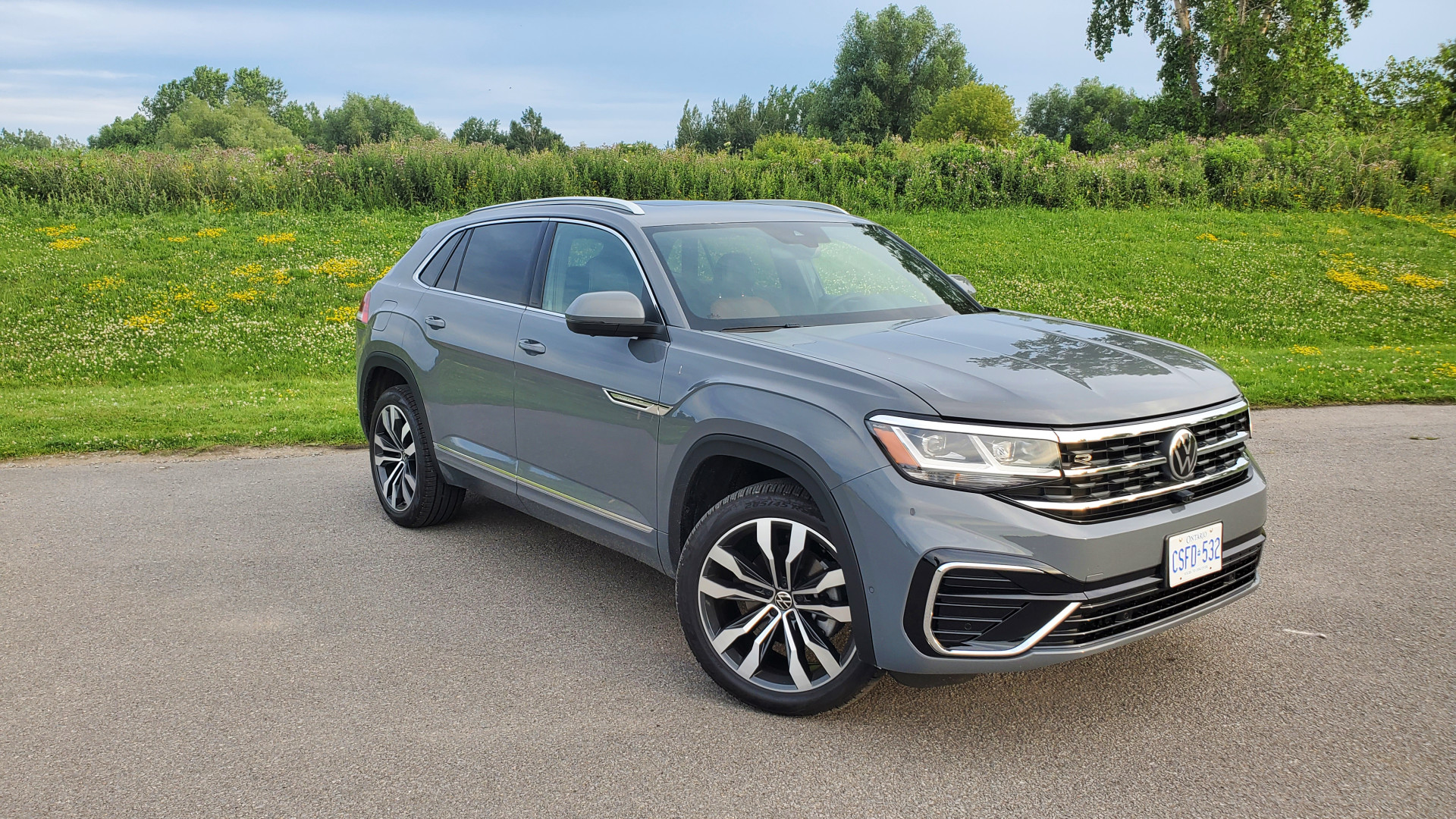 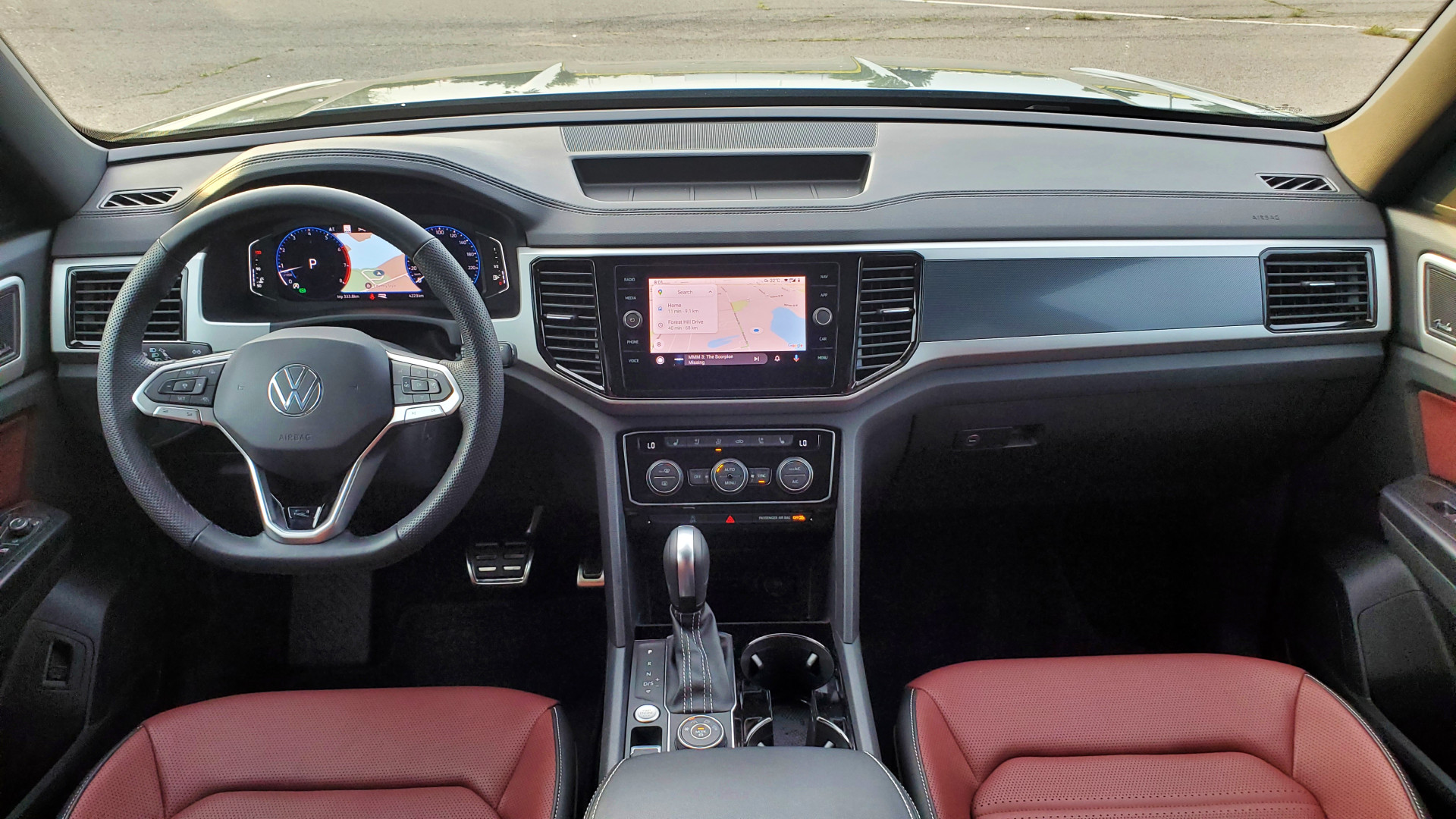 I’ll say this for the Cross Sport’s looks, it’s a rather handsome SUV. True, SUV design tends to be somewhat homogenous across manufacturers, but I think the Cross Sport possesses a sporting character, albeit in a geometric German way. The squarish fender lines and hood creases aren’t exactly graceful, but the rearward slope of the roofline and angular lighting signatures have a certain boldness. Combined with stylish 21-inch wheels and just enough brightwork, the Cross Sport cuts a sharper, sleeker profile than its boxier sibling. 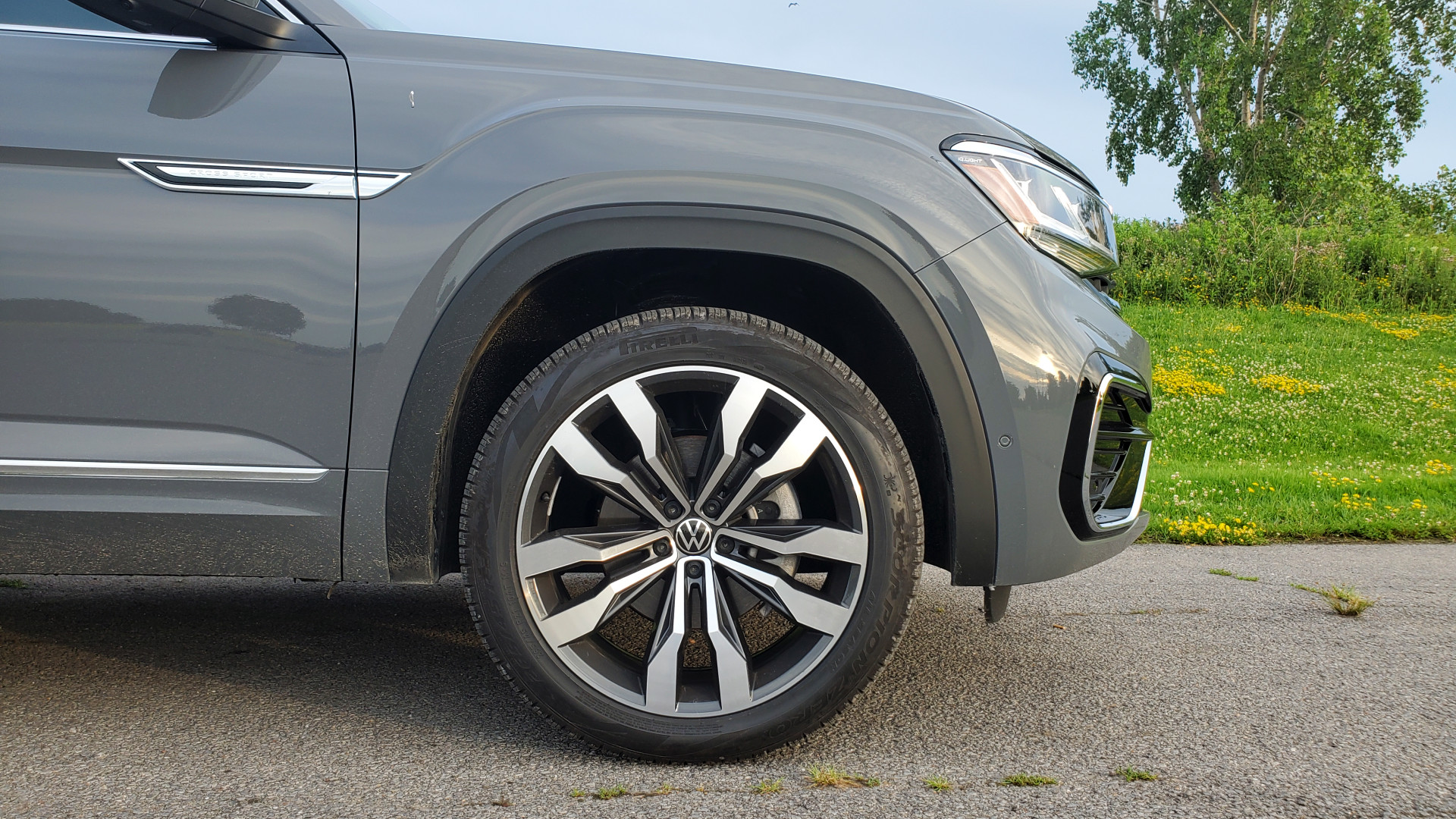 On the inside, the Cross Sport offers a good deal of space for both occupants and cargo. Despite having a more rakish profile, the Cross Sport’s greenhouse is still quite large, offering good outward visibility. The seating is comfortable, providing good articulation and support.

As for the design and execution of the cabin, I think Volkswagen designers deserve high marks. Touch points look and feel refined, controls and switches operate intuitively for the most part, and driver distraction is minimized. High notes for me include the multifunction steering wheel, which feels great to the touch and is easy to use, the gorgeous Volkswagen Digital Cockpit which can be configured in several ways, the handy wireless cell phone charge pad and, finally, wireless Android Auto.

In terms of the drive, the 3.6-litre V6 offers impressive acceleration and smooth power delivery throughout the rev range. I detected a slightly more aggressive shift pattern in sport mode with higher revs, but the Cross Sport is an SUV, the experience doesn’t change much. Generally, the Cross Sport’s handling feels responsive in everyday driving, with a reasonably quiet cabin and comfortable ride. 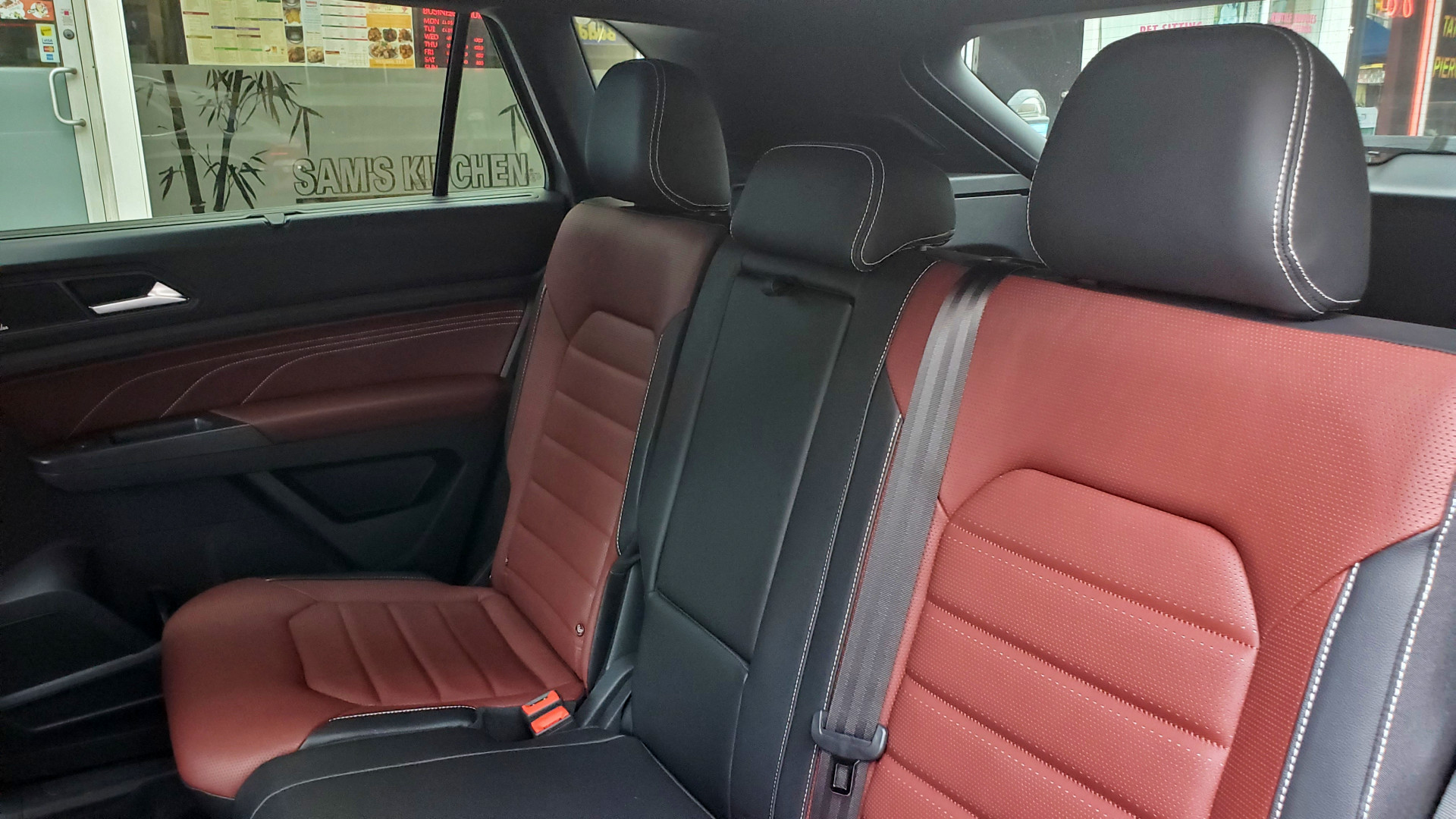 An off-road mode is also available, but I didn’t test it. The Cross Sport is aimed at mall parking lots, not trails, but it’s there if you choose to continue on after the pavement ends.

In terms of utility, the Cross Sport’s credentials are solid. With the rear seatbacks folded down, cargo space swells to 2,203 litres, and is a respectable 1,141 litres when they are in the upright position. The V6 also has a 5,000-pound (2,272 kg) maximum tow rating, for those who need an SUV that can haul.

As an avowed car guy who accepts the dominance of utilities in North America, I’d say the Cross Sport has a good deal going for it. From styling and available technology to packaging, utility and capability, it covers the bases well, I’d say. And with U.S. sales nearing 26,000 at the year’s midpoint, the Cross Sport is going to be with us for years to come.

SUVs are the future. And the present. But we’re still getting a new GTI and Golf R. That’s a bargain I can live with. 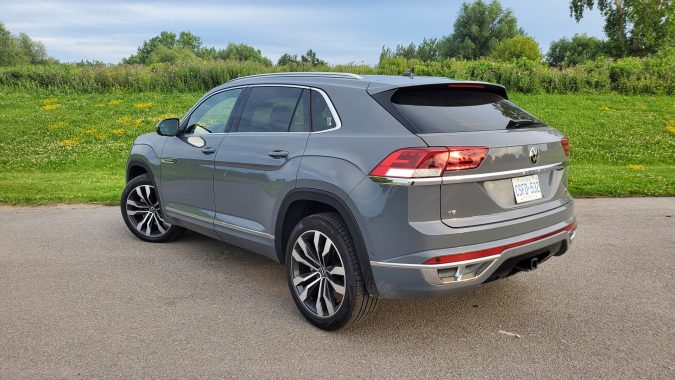 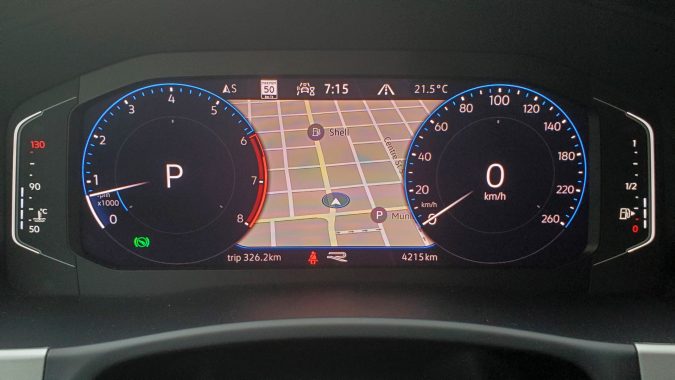 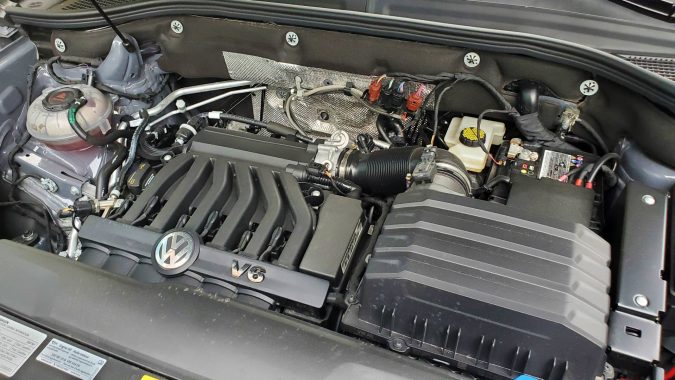 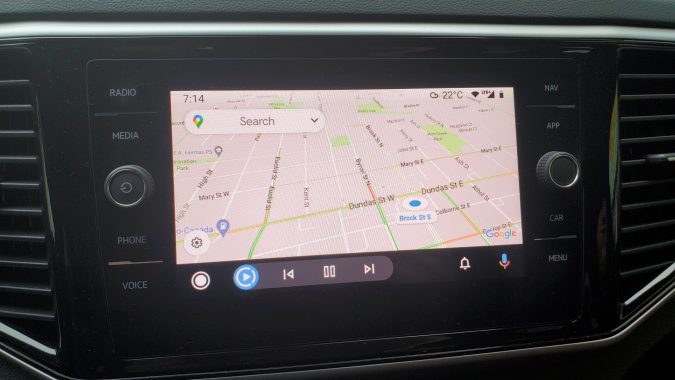