Go ahead and stare.

The Lexus LC 500 is the most beautiful car I’ve driven in 2021, and it is easily one of the most breathtaking cars I’ve ever laid eyes on.

I hesitate to put it at the very top of my list because it has a worthy contender in its own family with its convertible sibling, plus I’ve been writing about cars for a while and I’m sure there are other beauties I’ve driven that I can’t recall as I type this.

But I suppose the argument could be made that the others aren’t as worthy if I can’t remember them. Perhaps, although I think it’s more of a bandwidth issue – my mind can only recall so many cars at any one given time.

Regardless, the LC Coupe is right up there. Just look at it – you don’t need me to tell you this car is exquisite. And for the week I recently spent driving one, a lot of passers-by told me exactly what they think of it.

In short, just about everyone I encountered gave it two thumbs up, with apologies to the late Roger Ebert.

I’m going to try not to repeat myself too much here, as I also had the good fortune of reviewing the LC convertible last fall which is available here. For context, however, I will run through basic mechanical details along with 2021 updates. 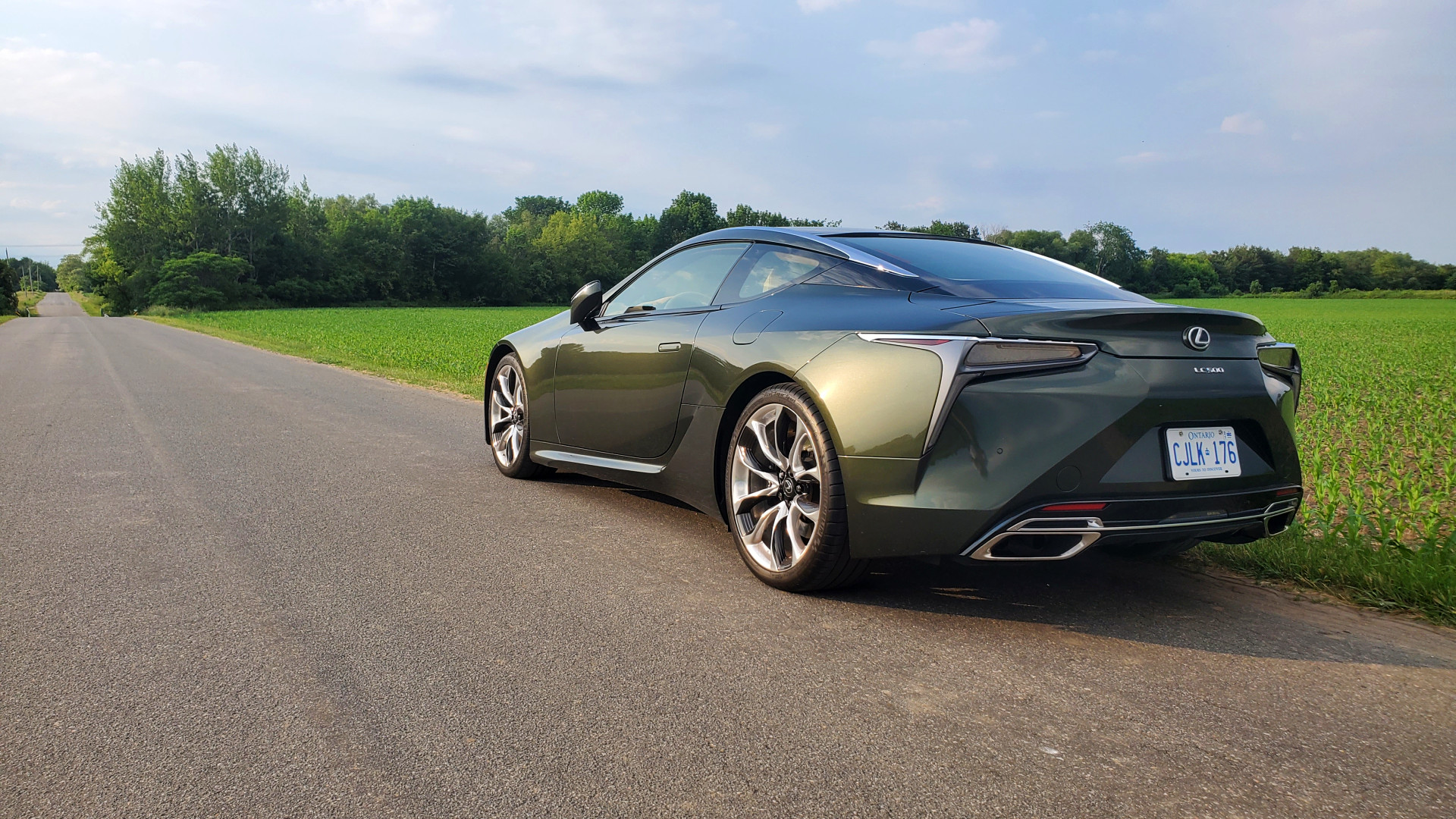 Like its convertible stablemate, the LC 500 coupe is built on the Toyota New Global Architecture L (TNGA-L) platform that is shared with the LS sedan and the second gen Toyota Mirai. From there, the three cars diverge significantly in most respects, especially powertrain where the LC is powered by a naturally aspirated 5.0-litre V8 (471 hp / 398 lb-ft) engine, while the LS has a twin-turbo V6 and the Mirai is a hydrogen fuel cell vehicle.

TNGA-L supports rear and all-wheel drive, and while the LS is offered with both depending on market (all-wheel drive only in Canada), the LC is strictly a rear-driver that’s paired with a 10-speed automatic transmission, which is also found in the LS. Of note, both cars are also available as gas hybrids and the new Mirai is rear-wheel drive, so it also has that in common with the LC. 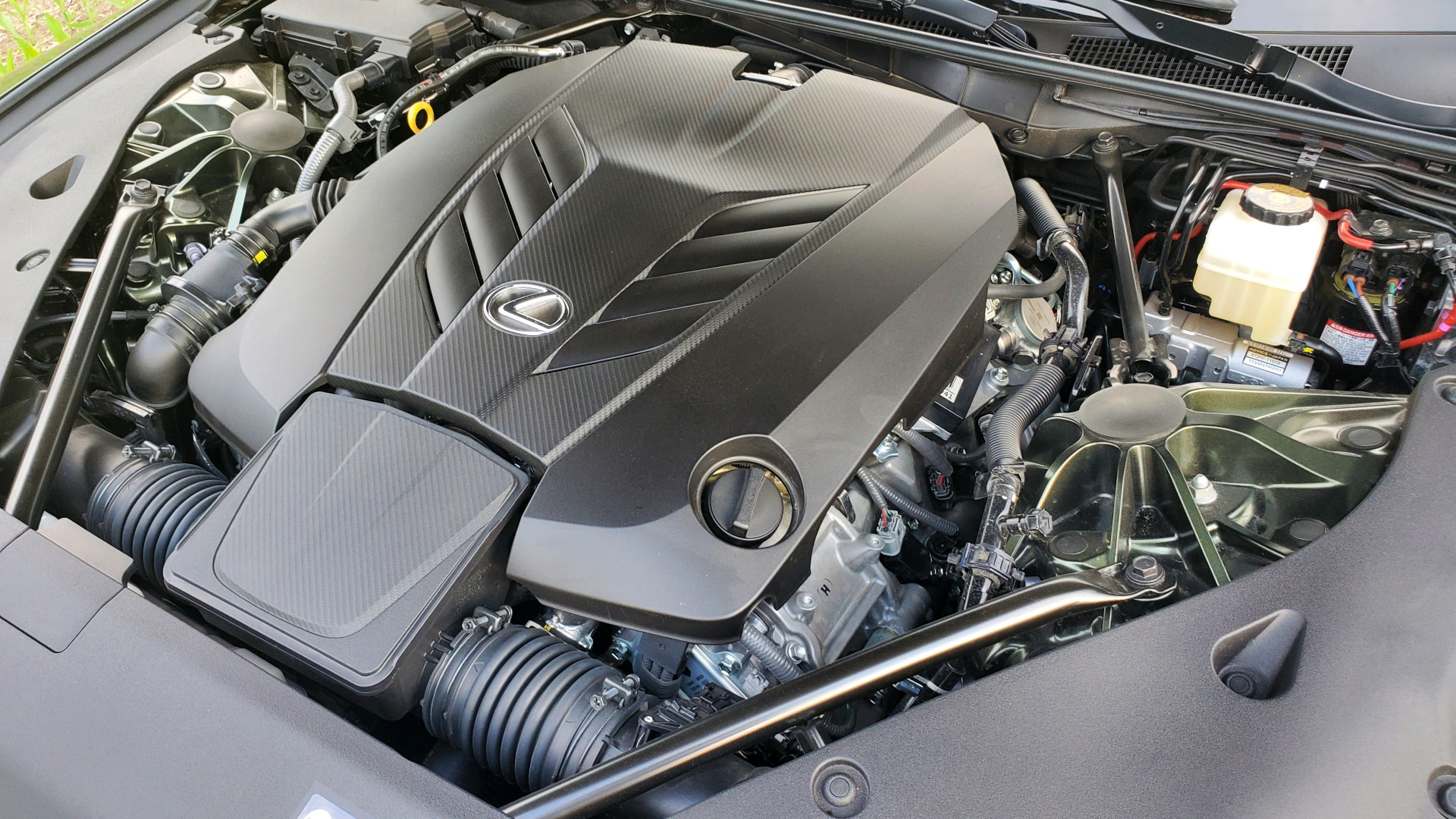 In terms of new for 2021, there are a few key items on the list provided to me by Lexus. Packaging and cosmetic changes are highlighted by the addition of Android Auto, which is standard along with Apple CarPlay. Three new exteriors finishes have been added – Liquid Platinum, Flare Yellow and Nori Green Pearl – to expand the LC palette to 10. On the inside, three colour schemes are available: Black, Toasted Caramel and Circuit Red, which is new and replaces Rioja Red. Another key cosmetic change is the availability of updated 20-inch forged alloy wheels with a Dark Graphite finish.

On the mechanical side, Lexus engineers have reduced the LC’s unsprung weight by almost 10 kg (22 pounds) which has been achieved with the use of aluminum lower suspension arms and lighter suspension stabilizers with an updated diameter and hollow design, along with lighter 21-inch rear wheels and new high-strength coil springs. 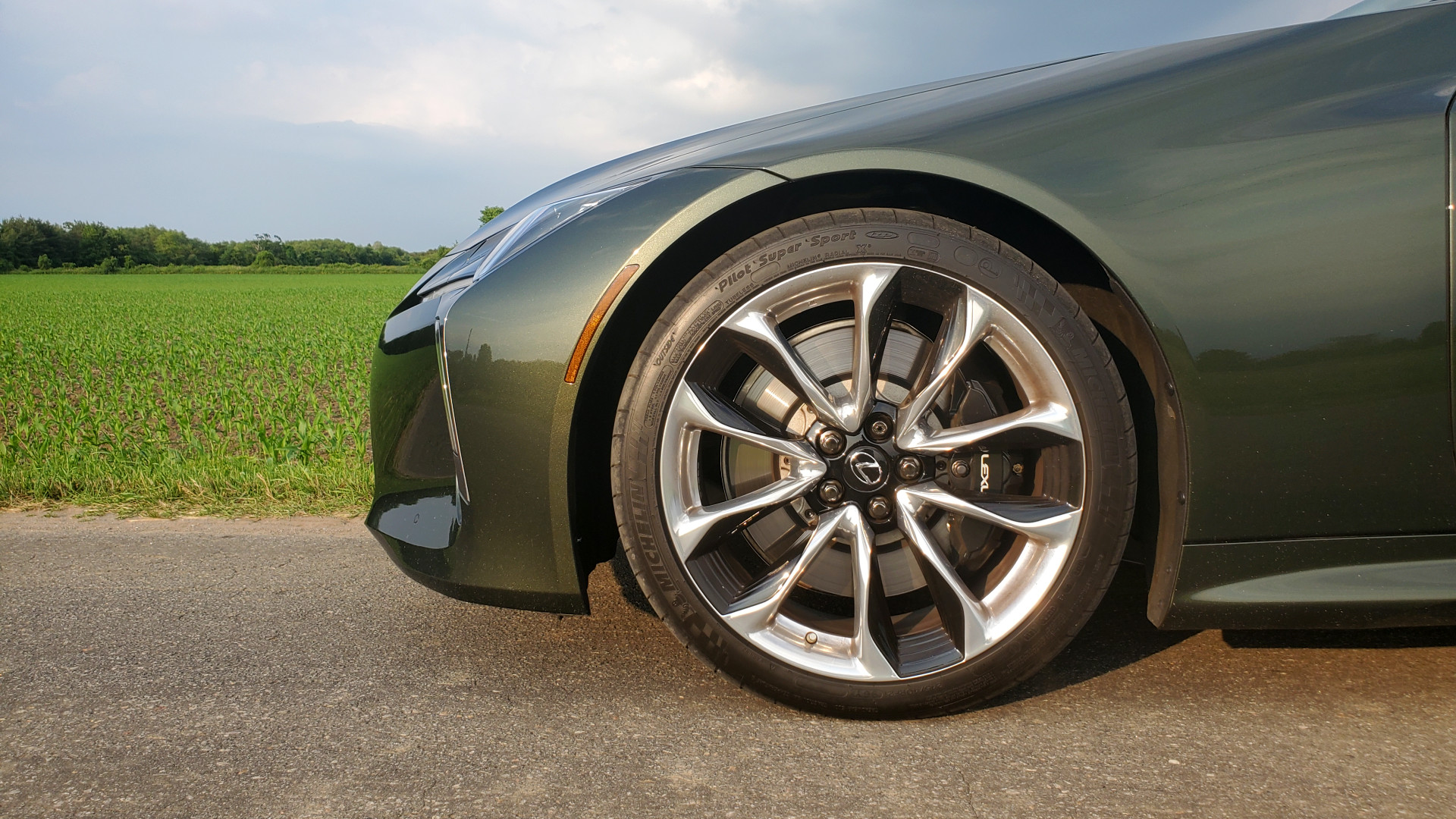 Other suspension changes include a longer stroke for the electronic absorber controls up front, and increased rigidity for the bound stopper and rear stabilizers to improve turn-in and for more linear steering.

That about covers it for changes. As for my tester, Lexus set me up with a press unit finished in Nori Green Pearl with a Toasted Caramel Alcantara and leather interior. 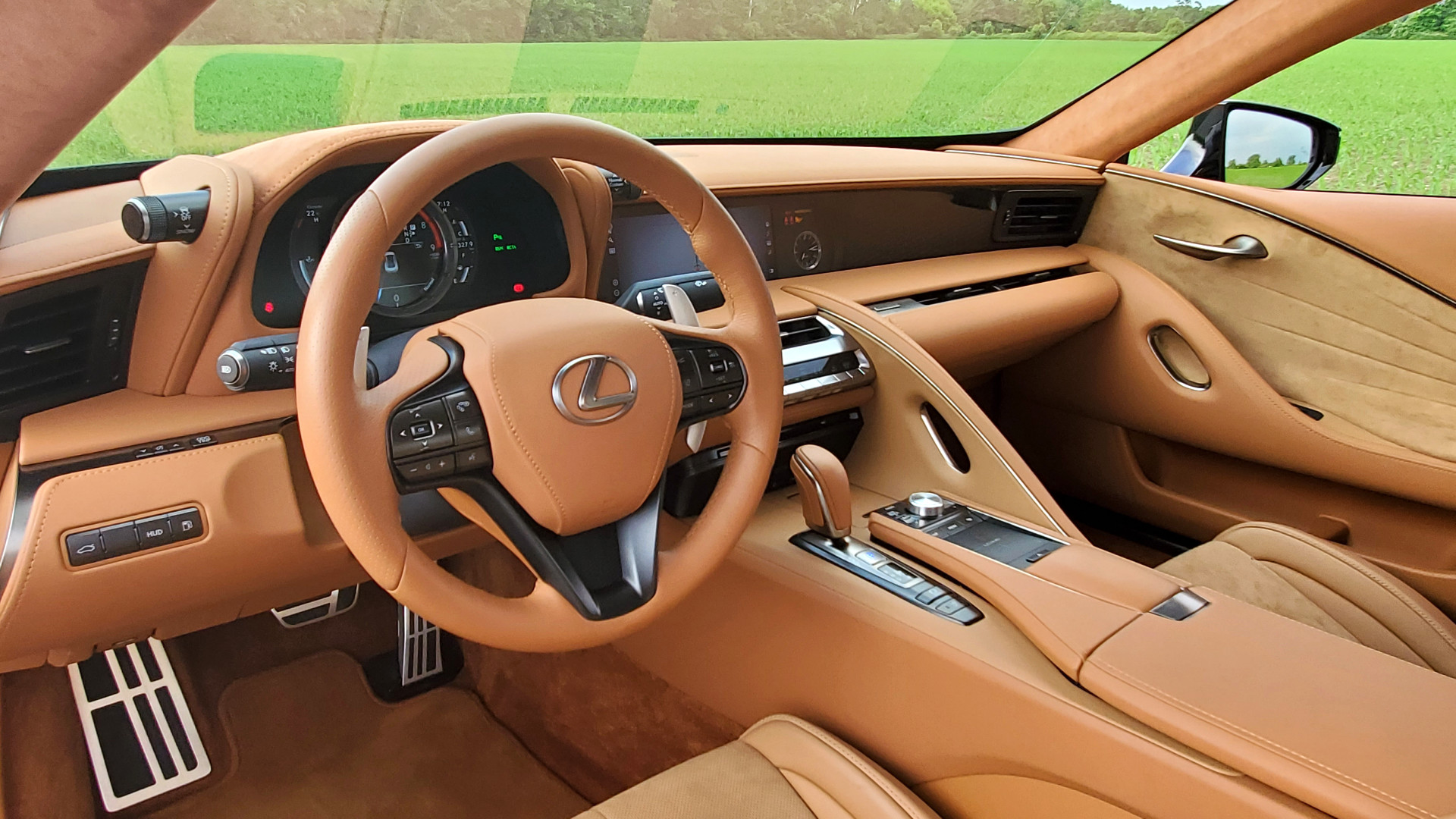 Those goodies push the MSRP before freight and taxes to a cool $117,050.

As I said, when it comes to the LC’s looks, the photos really do speak volumes and the car is even more stunning in person. Low, wide and more curvaceous than just about any production car with exception of a few exotics, the LC is a concept made real, a line I may have used when I wrote about the convertible last fall.

Its stunning beauty combined with ultra-low production volume and sales – especially in Canada where just 137 were sold in 2020 – all but ensure inquisitive encounters with admiring bystanders. And I had my share, including a ‘nice car’ from a kid cycling along on a sidewalk who couldn’t have been more than eight or nine-years-old. When a kid that young compliments your ride, you know the car is cool.

Yes, the LC is a car to be seen and to be seen in, and the in-cabin experience is just as compelling as the outside bodywork. The low-slung entry, which includes swinging your legs over a carbon fibre reinforced polymer scuff plate before landing in snug sport seats wrapped in Alcantara and leather, builds anticipation until the metallic starter button is pressed. 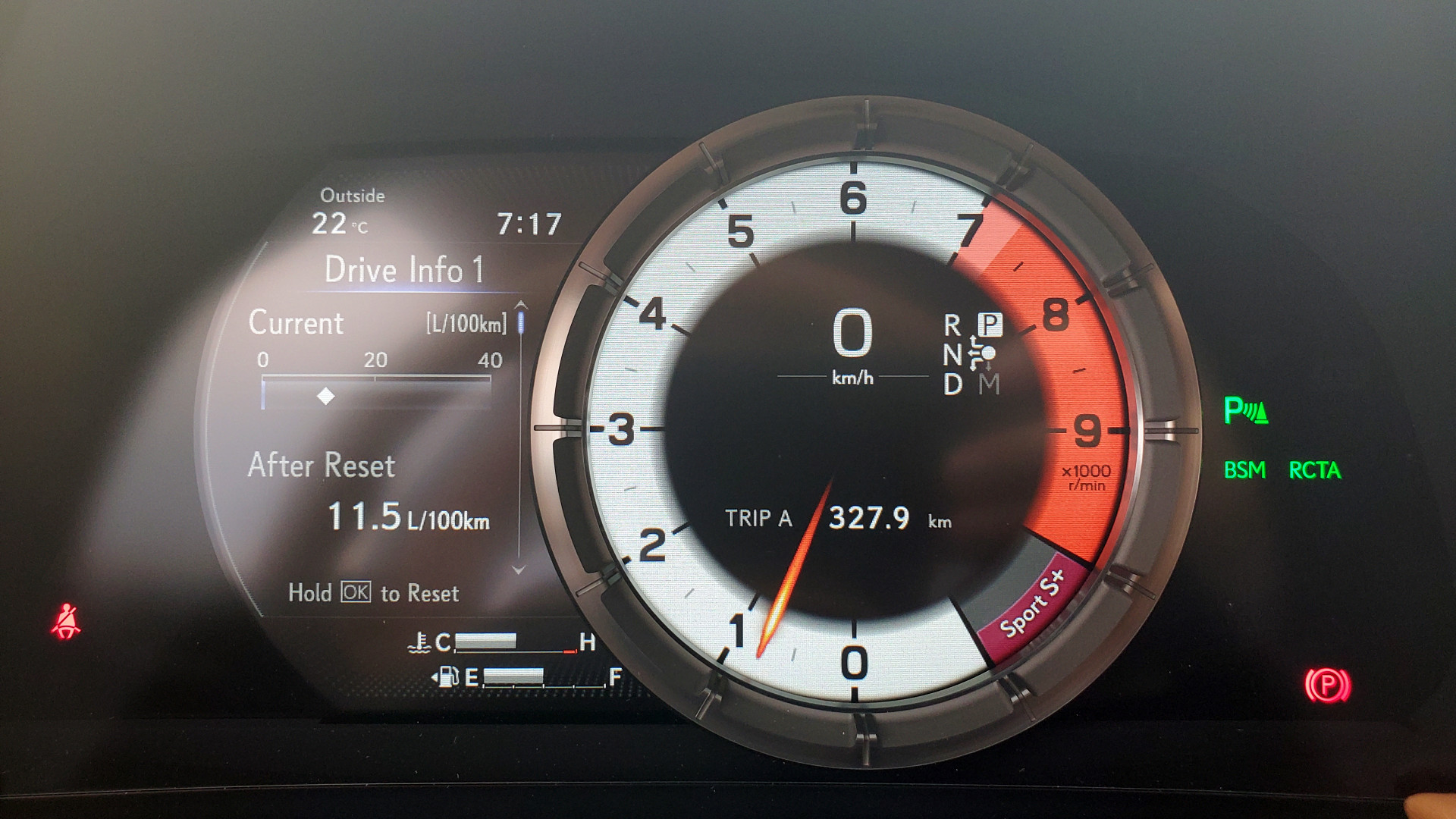 When the 5.0-litre V8 fires up, it starts low before a baritone thrum takes over, filling one’s ears with the sort of big horsepower sound that make cars like the LC so much fun to drive. The cabin is replete with fancy tech, including an adjustable digital instrument cluster which changes with drive mode, a head-up display and a 10.3-inch multimedia screen, placed next to the Lexus analogue clock. Yes, the back seat is way too small for adults and the trunk is Miata-sized, but do really care about those things?

Nope, that stuff doesn’t matter for a car like this. All you should want to do in the LC is adjust the seat and mirrors, find a good SiriusXM station (90s on 9, Pop2K, Classic Vinyl), notch the shifter into drive and go. Time spent in a car this delightful is precious, and less time spent fiddling means more driving.

On paper, and in my experience, yes, its V8 makes for a good slingshot. According to Lexus, the LC has a 0-97 km/h (0-60 mph) time of 4.4 seconds with a top track speed of 270 km/h (168 mph). I didn’t track the car during my time with it, but yes, I can attest that the V8 has rocket-like acceleration and creates a smashing symphony of exhaust sounds in the process.

Sport and Sport+ settings really help in that regard, and the suspension tinkering, along with the Performance Package bits, give the LC a more sporting character. Its turn-in, cornering and steering reflexes feel quite sharp and refined. Pretty stuck, in other words and, as a result, I think some seat time on a closed course would be pretty grin-inducing.

But – and I had a similar feeling when I drove the convertible – the LC is at its best when it’s just cruising along at posted speed limits, with the exhaust at a low rumble and the radio turned up as the admiring glances, thumbs up and salutes wash over it. 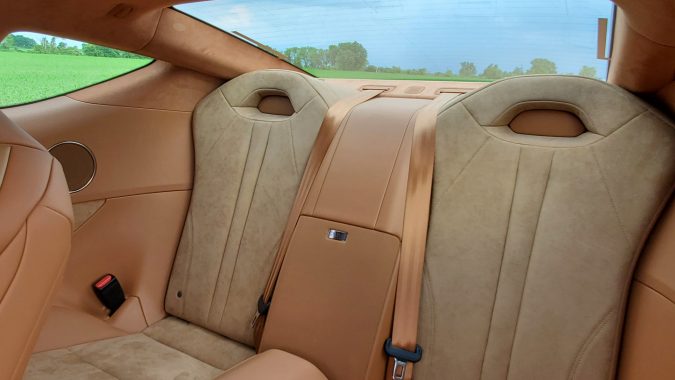 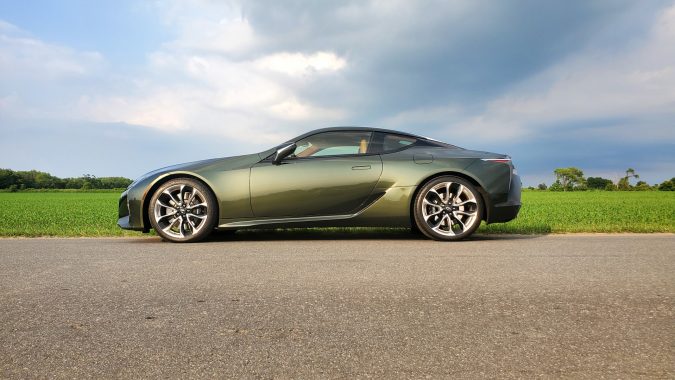