Essentially the same, yet totally different

VERNON B.C. — Back in the day, two car companies were trying to flog four-wheel drive passenger cars — Subaru in the popularly-priced category, Audi in the pricier ranges.

Neither could throw them off buildings onto unsuspecting customers.

Now, everybody’s got four-wheel drive. Not that 90 per cent of the people who buy it need it; if a front- or rear-wheel drive car fitted with four proper winter tires can’t get you where you want to go, you shouldn’t be wanting to go there.

But once again, from the “customer-is-always-right-even-when-he’s-wrong” file, you pretty much can’t sell a car other than in the bottom ranges of the market these days without four-wheel drive.

You come to me for accuracy and precision, yes? And that’s what you get.

Still, Subaru has been very effective at marketing four-wheel drive, and everything they sell here except the BRZ sports car has this feature.

Which, in case you are among those who think Subarus tend to be expensive, is pretty much bang-on for the segment.

The new Legacy is essentially the same as before, yet totally different.

By that I mean the concept and overall look of the car are similar to before – turns out, customers like the way they look – yet just about every part is new or significantly changed.

Perhaps most important is the structure. The Subaru Global Platform (SGP) was launched with the Impreza and Crosstrek a couple of years ago and will underpin all new Subes as they are updated.

Subaru says it spent a billion U.S. dollars on this platform, a tremendous investment for a small company.

But it provides a myriad of benefits, notably a much stiffer body for improved vehicle dynamics.

Yuji Yoshizaki, project senior manager for Legacy, also told us that this new body structure absorbs 40 per cent more crash energy than the old one, a remarkable leap forward.

The car has grown by a few centimetres here and there, notably in width, which helps make the rear seat a reasonable prospect for three adults.

One of the things Subaru customers say they like about sedans over SUVs is a more secure luggage space.

The new Legacy’s trunk is only three litres bigger than before, but a better shape means it can now handle four big suitcases, one more than last year’s car.

You also see a lot of Subes with roof boxes, a good way to add carrying capacity only when you need it.

There are four trim levels, labelled Convenience, Touring, Limited and Premier, with the expected increases in equipment and trim as you move up.

Provided you don’t keep your right foot buried in it all the time, you should also get better fuel consumption than the V6.

Both engines feed into a Continuously Variable Transmission (CVT). Subaru calls it “Lineartronic,” but because many customers don’t like the “motorboat” (constant engine revs) feeling of a CVT, Subaru has made it deliberately non-linear by programming in eight discrete “steps” to mimic how a conventional automatic behaves.

This takes away some of the fuel saving advantage of the CVT, but again, it’s what customers say they want.

The most immediately obvious improvement in the new Legacy is in the interior design and trim quality. It looks and feels like a more expensive car. 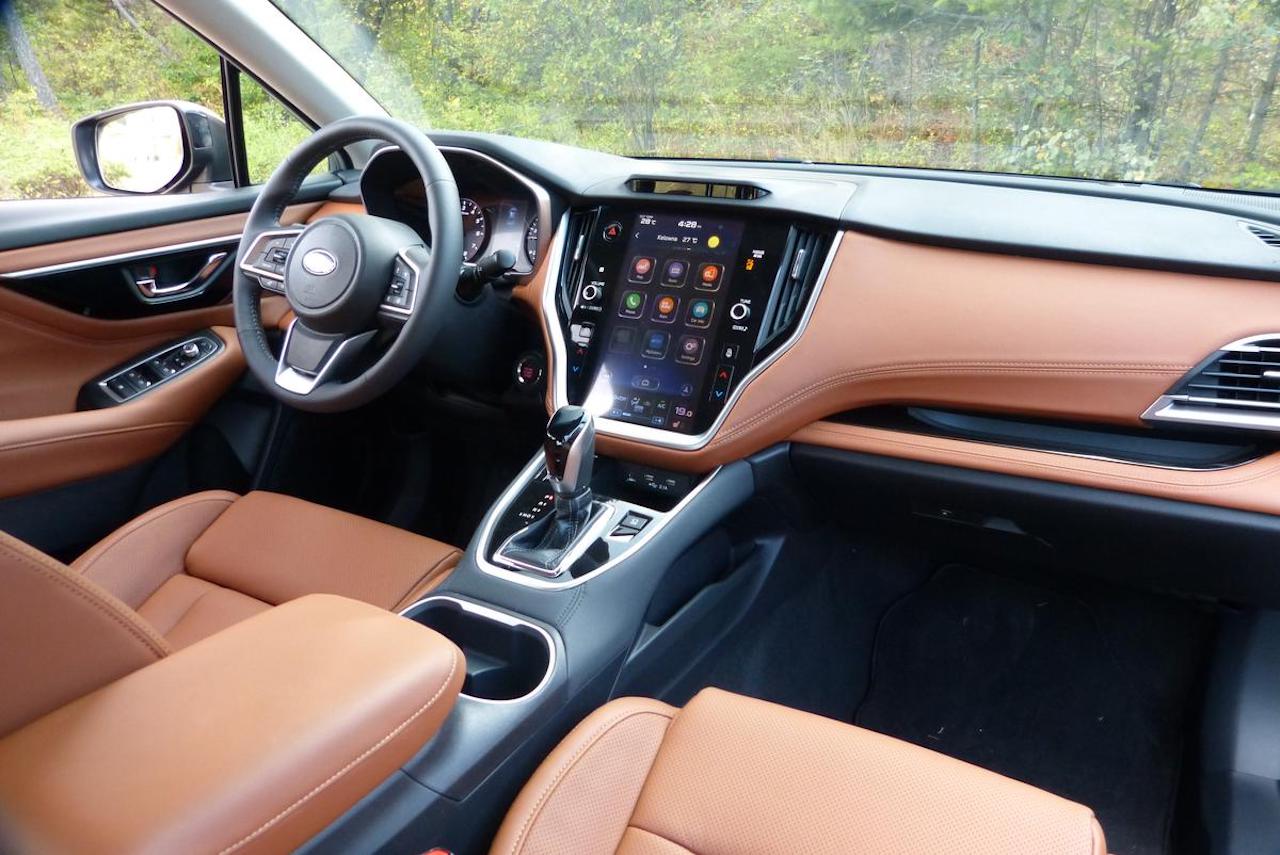 The StarLink connected-services suite is now offered for the first time in Canada, and the entire suite is standard on all trim levels and free for the first three years.

It offers good stuff like collision detection (so help can be dispatched automatically should the occupants be disabled), stolen vehicle locator and immobilizer, and a service appointment scheduler.

And truly horrible things like the fuel-wasting, pollution-creating and engine-killing remote start function. Why would you do this to your poor engine?

There is lots of gear even in the Convenience trim, including LED headlights, automatic AirCon and a pair of seven-inch screens, the top one for infotainment, the bottom one for HVAC.

All other trims get a new 11.6-inch tablet-style screen that can be programmed to suit your tastes and preferences.

Unlike most of the competition, Subaru recognizes that you simply cannot operate something like this and drive safely at the same time, so they have included proper round knobs for many commonly used functions.

Also standard on all trims is Subaru’s “EyeSight” safety system, which incorporates automatic cruise control with stop/start capability, pre-collision braking if the driver has nodded off or is too busy trying to do something with one of those damned touch screens, and improved lane keeping, which keeps the car in the centre of its lane without wandering back and forth like many of these systems allow.

Or, y’know, you could just drive the bleedin’ car. It’s always the first thing I shut off.

The range-topping Premier models get “DriverFocus,” which won a “Best Safety Innovation’’ award from AJAC (the Automobile Journalists Association of Canada).

This is a distraction mitigation system employing facial recognition technology to determine when you’re sleepy or fiddling with your phone.

It uses a camera to monitor your eyes to see if you’re getting drowsy, playing with your phon, or maybe paying too much attention to that stupid big screen.

It then issues visual and auditory warnings to tell you to shape up.

It can be set for up to five different drivers, and can even adjust the seat for each one.

We tried two different Legacies to evaluate the different engines.

The 2.5 non-turbo gets a bit thrashy when pressed, which was most of the time in some of the hilly country we encountered.

Unlike most of my colleagues, I’ve never had a big hate on for CVTs per se. This one worked OK, although occasionally it took a second to decide to click into drive from reverse.

The turbo engine was markedly quicker, and of course, thanks to forced induction, was not affected by the higher elevations on our test route.

Both cars handled decently, giving a confident feel. I wouldn’t necessarily call them “sports sedans,” although with the turbo you’ll be able to keep up with just about anybody in the class.

Ted Lalka, vice-president product planning and marketing for Subaru Canada, noted that their biggest challenge is getting people out of SUVs and into sedans.

And once there, to get them away from the usual suspects, such as Honda Accord, Nissan Altima and Toyota Camry.

Once they do, people tend to stay with the brand, as indicated by the fact that 98 per cent of all Legacies sold in Canada in the past ten years are still on the road.

If you’re one of the smarter folk who still want a proper car, the new Legacy is clearly worth a look.