A fan favourite in a handsome new package

LOS ANGELES, CALIF.—The Nissan Sentra is in a tough segment that keeps getting tougher.

Compact car sales are down in recent years, while compact SUVs have become ever more popular.

That said, recent stats indicate a flattening of both curves.

While less popular than it was, this segment is one of the most competitive in the business, with such stalwarts as Honda Civic, Toyota Corolla, Mazda3, Hyundai Elantra, Kia Forte and Volkswagen Jetta all competing for your dollar.

How does Sentra stack up?

First, pricing is always critical in lower-end market segments, and Sentra has traditionally been more than competitive on this vector.

Pricing has been released for the U.S. market, but Canadian numbers won’t be out until closer to the car’s February on-sale date.

Expect it to start in the high teens, and top out close to 30 large.

At the press intro for the eighth-generation Sentra, Steve Rhind, director of marketing for Nissan Canada, said their research indicates compact-sedan customers tend to drive long distances, often commuting to work, and have neither the need nor the desire for a bigger, thirstier vehicle (read, SUV).

Perhaps more to the point, Rhind says these prospects want a “personal space” and a more emotional driving experience, because they spend so much time in their cars.

To this end, Sentra gains an all-new platform, shared only, apparently, with a Chinese-market “Sylphy.”

The major feature here is independent rear suspension, when most in this segment make do with a semi-independent twist-beam arrangement.

There is also a suite of driver-assist systems, including active-ride control, which reduces body motions on bumpy roads; intelligent-trace control, which dials in additional steering if the car deems it necessary; and something called vehicle-dynamics control, which automatically helps keep the car from spinning out in emergency manoeuvres.

There is considerable family resemblance to Altima and Maxima, primarily in the roof, which appears to float above the car. It is also available in a contrasting colour to further emphasize this point.

Inside, there is plenty of room for four — five in a bit of a squeeze. The front thrones are Nissan’s “zero gravity” units, developed in conjunction with NASA engineers, which make their first appearance at this price level.

The instrument cluster is somewhat conventional in design, which to me is a good thing. Clear dials, easily read. 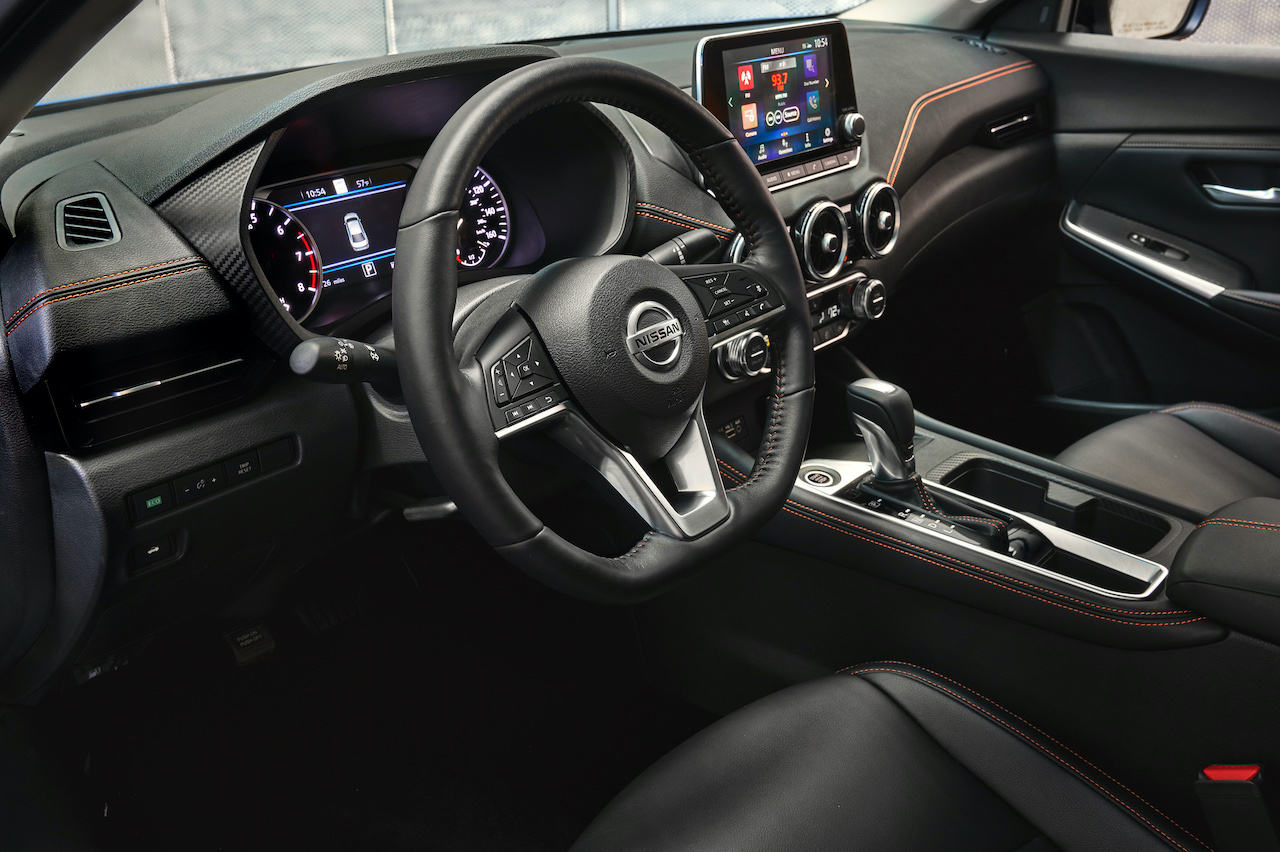 Many dashboard functions are handled with proper knobs, the only safe way to adjust things while on the move.

Yes, an eight-inch capacitive touchscreen comes in at the midpoint SV trim level for those who don’t care so much about safety — you simply cannot operate one of these without taking your eyes off the road and your mind off the task at hand.

Sadly, you can’t seem to find an uplevel car these days without this sort of nonsense.

Apple CarPlay and Android Auto are both supported as you move up the price ladder.

There’s a boatload of high-techery that’s standard across the board, such as the always irrelevant blind-spot warning system (if you adjust the side-view mirrors far enough out, those spots are no longer blind), the always-irritating lane-departure warning system (if you can’t stay in your lane, call a cab), the more useful rear cross-traffic alert system (still no warning system for good-natured traffic — ho, ho), a driver-attention warning system (which can be fooled), emergency-braking systems front and rear and an “overhead” camera view to make parking a breeze (Nissan was the first to offer this feature).

Three big, round air vents in the dash bear deliberate resemblance to those found in Nissan’s GT-R Supercar.

Which, along with the Nissan badging, may be the only resemblance.

Nissan continues to offer a manual transmission in Sentra, but only in the lowest trim level.

Some of my Quebec colleagues at this event complained about this restriction, saying that Quebecers are more likely than other Canadians to shift for themselves, but still might want some of the goodies offered further up the product cadence.

Nissan presumably has done its product planning homework, but allowed that if there was sufficient demand, it is something that could be done. 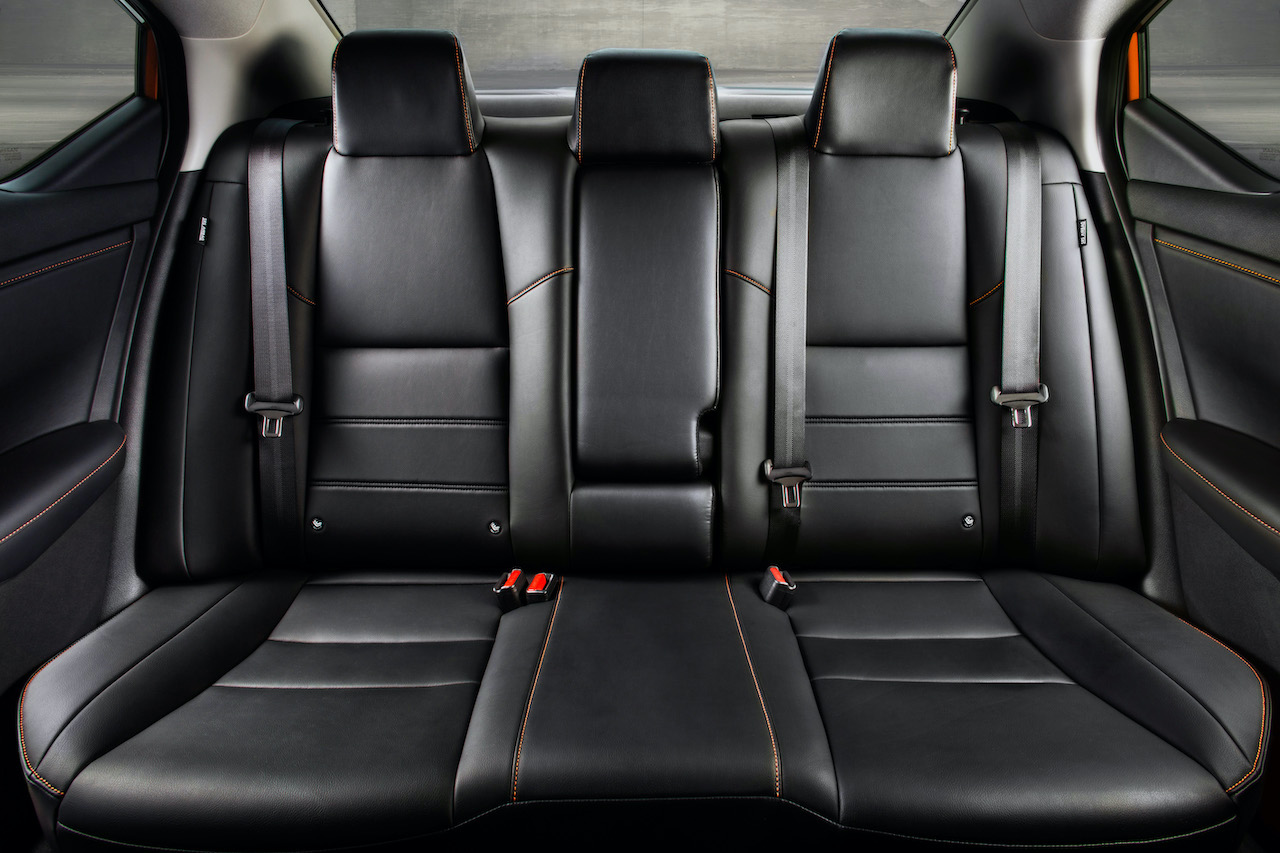 Heated front seats are standard from S Plus up, meaning you can’t get them with a manual transmission. Boo.

And the heated steering wheel only comes in at the SR trim level. Double boo.

Sentra remains front-drive only, as are most entries in this class, Mazda3 being the primary outlier here.

The only Sentra trim level available for testing was the range-topping SR, in a bright “Monarch Orange Metallic” paint. Strikingly handsome.

The seats immediately feel good, but the point of the zero gravity seats is that they continue to feel good after a long drive. These pass the test.

Despite the significant increase in power, the car didn’t feel particularly sprightly.

The challenge engineers face with a continuously variable transmission is to maintain its fuel-economy advantage over either a manual or a conventional autobox, while minimizing the “motorboat” effect that many consumers find irritating.

If you drive the Sentra gently, it feels largely unremarkable. If you lean on it a bit, the transmission starts to reveal some uncertainty and slow shifts, which feel unnatural.

Some drivers in our group really disliked it; I didn’t find it so bad.

The drive train does get buzzy if pressed, and the car gets noisy. Given the target customer is doing largely highway cruising, this may not be a serious issue.

Historically, Sentra has punched above its weight class in the sales battle. The new edition offers the things that has made it popular with its fan base, in a handsome new package.

Will it be able to keep pace in this very strong field?

We’ll start finding out next February.