Not too big, not too small — just right

SAN DIEGO, CALIF. — Hearing some of Mazda’s engineers talking about their new compact SUV the CX-30, you sometimes catch a whiff of them wishing they didn’t really have to build it.

More so perhaps than most car companies, the people who work for Mazda tend to be “car guys,” and I mean that in a gender-neutral sense. Many of them are racers in their spare time.

They know that while the CX-30 shares many of its components with the brilliant Mazda3 compact sedan and hatchback, most customers want a vehicle that is taller, hence less safe, due to its higher centre of gravity; is less economical because it’s heavier; doesn’t handle or ride as well for both of those reasons; and costs more.

But the customer is always right, even when he’s wrong. And if Mazda customers want a vehicle to fit into the tiny gap between the CX-3 and CX-5, now they have it.

It is on sale now, with prices ranging from $23,950 for the entry-level GX with front-wheel drive to $33,850 for the loaded GT four-wheel drive.

You might well think that CX-30 is an odd name for this vehicle. Why not CX-4 to be consistent with its sister ships?

It seems there is a Mazda sold in China with that designation that has nothing in common with this one.

I never got a really solid answer from Mazda, except that the Chinese did not want to share the name.

Sandra Lemaitre, director of public relations and corporate affairs for Mazda Canada, noted that while Canadians love the CX-3, their main complaint was: not enough room inside.

Yet, they didn’t want a vehicle that was significantly larger.

“Rightsized” is the term she uses to describe the CX-30.

From a styling perspective, any SUV is effectively a two-box car — one box for engine, another box for people and stuff. What can the stylists do to make any of them stand out?

Ken Saward, director of automotive design for Mazda North American Operations, said the company’s design philosophy (called “kodo,” a Japanese word meaning “soul of motion”) is intended to make cars look like works of art, with a handmade finish to them.

The CX-30’s sloped roofline gives a graceful profile, perhaps at the expense of a couple of litres of cargo capacity. But who ever loads their truck right to the ceiling?

It certainly holds more than the CX-3, and has a much wider opening for loading all that stuff.

The most intriguing aspect of the styling is what they’ve done with the body sides. Subtle contours replace what are usually flat panels, giving them three dimensionality and yielding some interesting reflections that change as the light strikes them at different angles.

I’ve tried to capture this in the photos; I hope you can see what I mean. 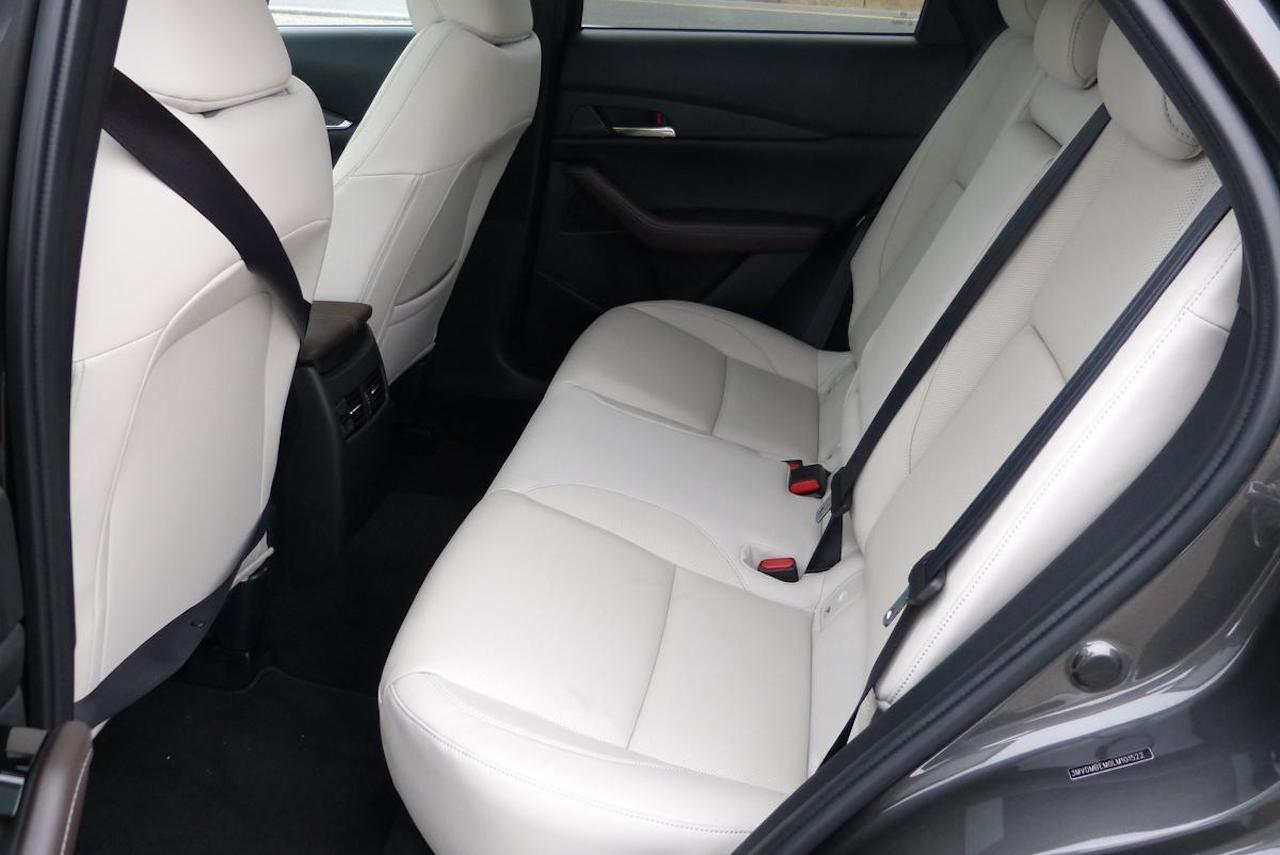 The interiors reflect Mazda’s push to move their products upmarket, with materials that look and feel a step or two above the norm for this class.

Special attention has been placed on designing seats that keep the body as upright as possible, which is the least stressful way to sit while operating a vehicle.

Matt Valbuena, an engineer who works on interior controls, talked about the three types of distraction a driver faces:

The solution would be to place all controls within easy reach of the driver.

With the myriad functions in today’s cars, this is increasingly difficult to do.

So, Mazda has eschewed touch screens you need to look at to operate (visual or manual distraction) and focused on tactile controls — buttons to push, levers to slide, knobs to rotate. You can operate them without staring at them, and can keep your attention where belongs — on the road as you’re hurtling along at a buck-thirty.

I know this sounds like a radical concept, but somebody’s got to do it. 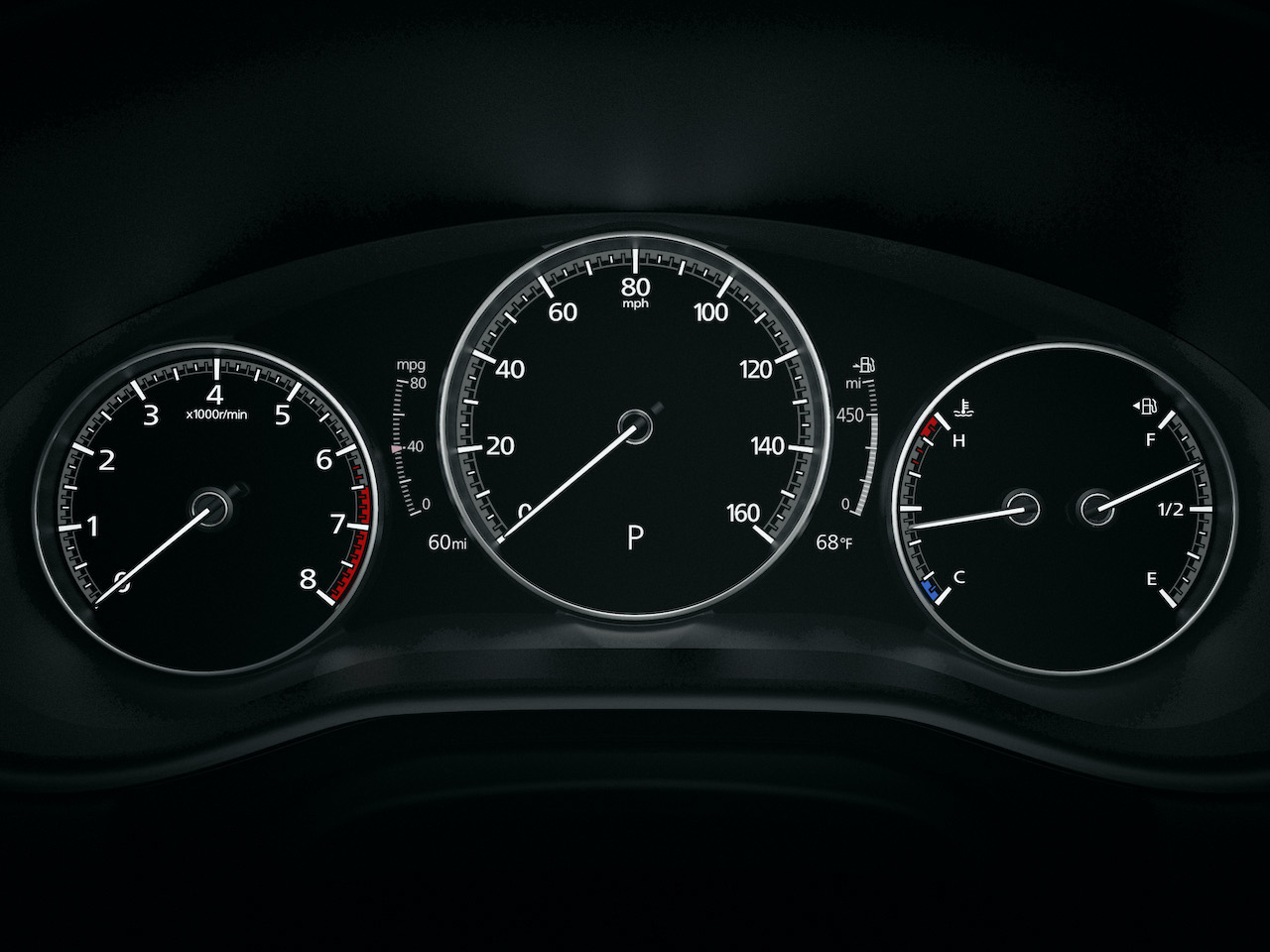 There is some logic and consistency in the various gestures, although, like all such systems, it may take drivers some time to get fully acclimated.

Dave Coleman, a former car journalist who is one of the sharpest minds in the business, spoke about the suspension. I wish I had ten times the space so I could do his presentation justice.

He described how our bodies move when we walk — our heads actually bob up and down about five centimetres, but we don’t really notice.

He showed a video of a passenger’s head as a car went over a bump. You would think a softer suspension would give a better ride, but in fact it makes the head bob up and down more than those five cm, which feels uncomfortable to us.

What they discovered felt the best was a relatively soft tire side wall to absorb the initial shock, and firmer bushings to reduce ancillary motions in the suspension.

Should the car detect a situation where extra grip might be required, such as cold exterior temperature and the wipers are on, it will assume the road might be wet and slippery, and the four-wheel drive kicks in before the wheels start to spin. Clever stuff.

In the four-wheel drive models, Mazda’s equally clever G-Vectoring Control (GVC) automatically cuts power ever so slightly when the car is steered into a corner to transfer weight to the front to assist in turn-in response.

Once into the corner the system resets the torque, which transfers load to the rear to maintain stability through the corner.

Newly added to the system — hence, GVC Plus — is braking control, which automatically adds a slight braking input to the outside tires when exiting a corner to help pull the car straight again. The plan is to reduce steering wheel angle to maintain a stable posture.

Four-wheel drive is standard on the range-topping GT models, and a $2,000 hit on GX and GS trim levels. I can’t imagine many customers in Canada not checking this box.

Powertrain-wise, the CX-30 is effectively the Mazda3, with the same choice of 155 horsepower 2.0-litre or 186 horsepower 2.5-litre four-cylinder engines depending on trim level, and a six-speed automatic transmission across the board.

Our test mounts were the upper echelon models, all with four-wheel drive and the 2.5-litre engine.

The drive route was one of my favourites — east from San Diego to Julian, then generally north and a bit east through the Santa Rosa and San Jacinto Mountains National Monument along the two-lane twisty blacktop of song and legend into Palm Desert.

Of course, they had pickup trucks all along the route, presumably in radio contact so they could pull out just in front of us when we were having too much fun.

And yes, this is me saying we had fun driving an SUV in the mountains.

True, it would have been more fun without the extra 54 kilograms of weight, and if the car was that little bit lower, but I think I’ve made my point about SUVs.

We were going through elevations in the low thousands of metres; altitude thins the air and reduces available oxygen, hence reduces power, and at times the engine felt a wee bit stressed.

But it is responsive and decently quiet. The transmission shifts well.

The old saying about any sufficiently advanced technology being indistinguishable from magic applies to the GVC-Plus system. It is seamless in operation; you cannot tell that it is working. The car just feels naturally very stable even in quick corners — yes, we were occasionally able to dodge those movable chicane trucks.

As I have said before with this system, it makes you feel like a better driver than you probably are.

The seats were comfortable, and left us refreshed after our brisk drive. There’s enough room in the back for two reasonably friendly adults.

The sound systems are excellent, thanks in no small part to how well the car is insulated from external noise.

Have I already mentioned that I wish you’d buy a Mazda3 instead of one of these? Oh, I have? Sorry.

If I can’t convince you of that, and you are bound and determined to buy a compact SUV, the Mazda CX-30 just has to be on your shopping list. 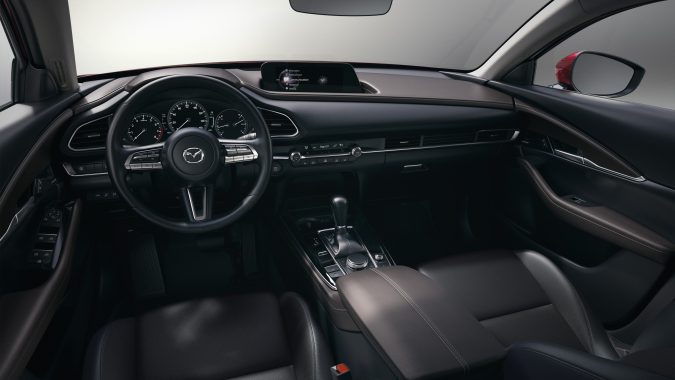 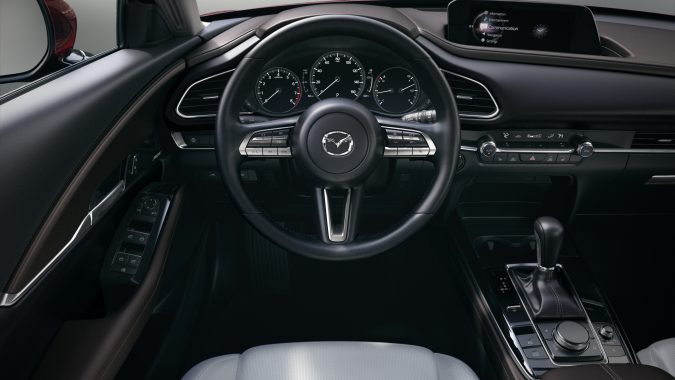