It goes, it handles, it cossets, it pampers.

Pretty much since somebody put springs on an ox cart, this has been a favoured metaphor to describe how a vehicle should feel.

Over the years, many have tried to turn that metaphor into reality. The idea of an air-cushion suspension has long intrigued engineers, and several variations on this theme have reached production.

Probably the best example yet to reaching this goal is the new Audi S8 sports sedan, now on offer at Audi stores, starting at $151,600.

What Audi is calling “predictive active suspension” scans the road ahead and, under certain conditions, will prepare the suspension for what is coming up.

For example, in city traffic at or below about 70 km/h, a forward-facing camera will notice that a speed bump is imminent. It will prepare the suspension, and when the front wheels are about to encounter the bump, it will in effect “pull” the wheels up so the car glides over it.

If it’s a pothole rather than a bump, it will actively shove the wheels down into the depression to reduce the effect on the passengers.

It is at the same time quite remarkable and a bit eerie. You find yourself slowing down to below the activation threshold just to experience it.

Hmm — you don’t suppose police forces have encouraged Audi to limit this feature to such a low speed? (Remember — just because you’re paranoid doesn’t mean someone isn’t watching you.)

This system also reduces dive under braking and “squat” under acceleration, keeping the car’s occupants less stressed under all conditions.

And it only works at relatively low speeds. As computer processing speeds increase, so will the system’s capability.

The other feature this suspension offers is the ability to bank into a corner, rather than heel outwards. Motorboat enthusiasts will feel right at home.

Actually, that’s a wee bit of an exaggeration. You have to really pay attention to even notice this, because it only tilts the car about three degrees and because it feels so natural. 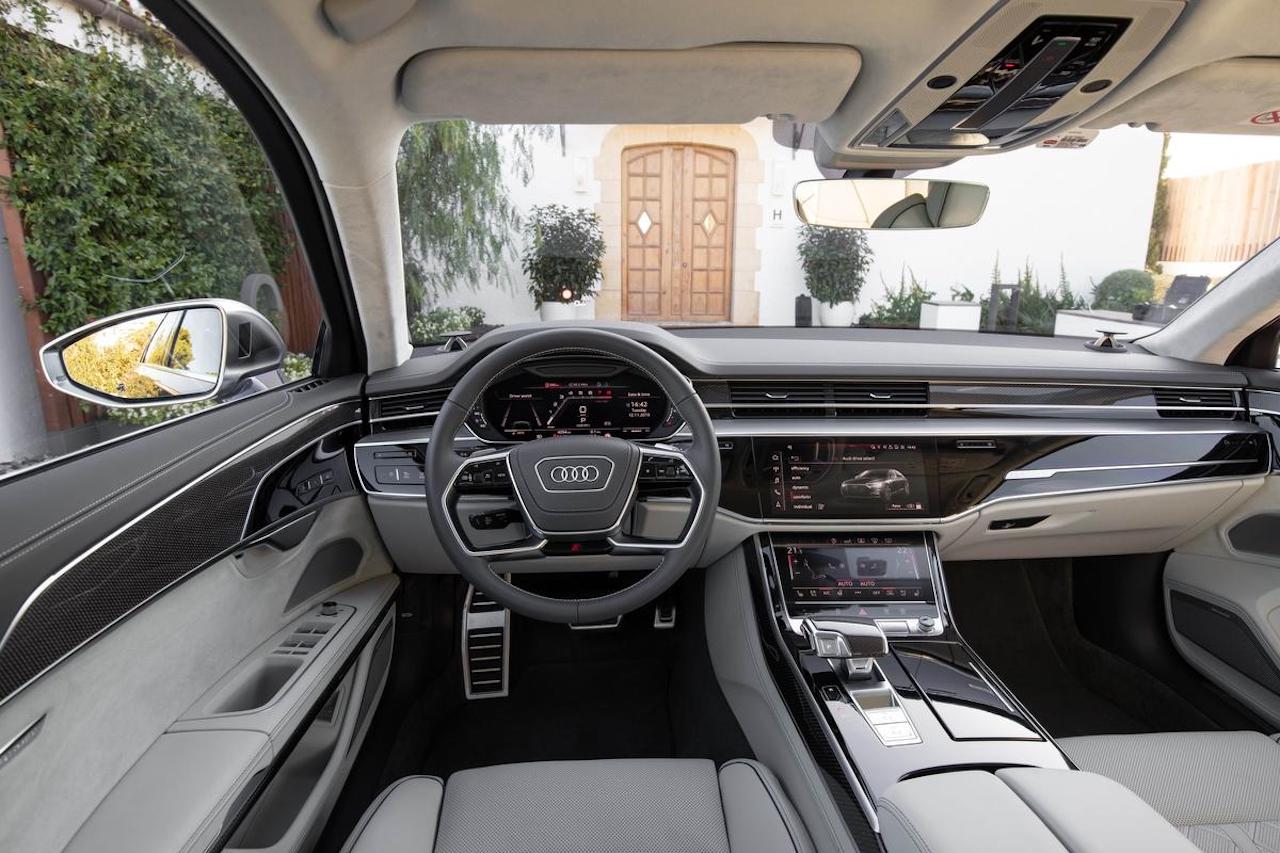 My first time in the car was when we were being driven from the airport, where the technical press conference took place, to the lunch stop. I figured it would be easier to note what was going on if I wasn’t simultaneously negotiating Barcelona traffic.

So, I sat directly behind my driver in order to get as close as possible to a driver’s-eye view of what I was experiencing.

My driver did a few extra-sharp cornering manoeuvres and hard stops to illustrate the car’s behaviour. All I can tell you is — it works.

Getting out on the open road after lunch, all was confirmed.

Like the very best technology in any field, you don’t even know it’s working. It just does what it’s supposed to do.

The system will face a tougher test on the battle-scarred streets of Toronto when I get to test the car back home. I have little doubt it will be equally impressive.

Predictive damping isn’t this car’s only party trick. It will also raise itself 50 millimetres when you select Park and open a door to ease ingress and egress, then lower itself afterwards.

Presto — yet another reason not to buy an SUV.

The S8 also features four-wheel steering — turning the rear wheels counter-phase to sharpen the car’s behaviour in low-speed corners, and in-phase at higher speeds to help stabilize the car.

It’s not often that a suspension system in a new model would be a bigger part of the story than an engine that offers well over 550 horsepower.

That’s how impressive the new S8’s “suspenders” really are.

A 4- volt mild-hybrid alternator/starter adds extra urge on demand. Audi figures this feature will cut fuel consumption by some 0.8 L/100 km in normal use.

The combination is enough to generate a 0-100 km/h time of 3.8 seconds. Top speed is electronically limited to 250 km/h.

When you’re not doing the drag racing thing — i.e., 99.9 per cent of the time — engine stop-start and cylinder deactivation under low-power-demand conditions further improve efficiency.

Also, in normal driving that massive and broad torque band makes passing a mere transcendent thought, transmitted via your right foot to your obedient automotive servant.

The eight-speed ZF automatic with paddle shifters delivers creamy shifts when in one of the driver-selectable less-sporty driving modes, and sharpens things up considerably when the driver demands it.

Full-time “quattro” four-wheel drive is standard, perhaps needless to say. Audi started this ball rolling when nobody else cared. Now it’s hard to sell a luxury car without it.

The so-called “Sport” rear differential can direct additional torque to the outside rear wheel to help push the car around the corner to reduce understeer (or plowing), or to the inside rear wheel if it detects imminent oversteer (fishtailing).

It will make you feel like a much better driver than you probably are, and who doesn’t like to be flattered now and then?

The S8 will be offered in two wheelbases. Canada, as well as the USA, China and South Korea, will only get the longer one (by 130 mm), the thought being that if you’re going big, you might as well go biggest.

Trainspotters will enjoy identifying a variety of exterior changes that help distinguish the S8 from its A8 sibling — badging of course, some details on the grille and side-view mirrors and, perhaps the most prominent, two pairs of oval tailpipes typical of Audi S models.

Audi has long led the world in interior design and execution. While there has been considerable catching up by the competition of late, the S8 is still a lovely and beautifully executed place to be.

Naturally, I toss in my usual beefs about way too many touch screens and way too few proper knobs and levers. This makes it impossible to do just about anything without taking your eyes off the road and your mind off the task at hand.

Regular readers will know, and hopefully appreciate, that I’m never going to give up on proper ergonomics. The industry will either figure this out or will be legislated into it.

That sadly unavoidable concern notwithstanding, the Audi S8 moves to the very front ranks of sporting big sedans.

It goes, it handles, it cossets, it pampers.

You can take three friends with you.

And it looks gorgeous.

Is there anything else a six-figure sedan should do?