Freshened up and ready to go

KERRY, IRELAND—When I stopped being an editor and returned to writing, nearly three years ago now, I also started to travel more. Since then, I have been just about around the world. As I pass through customs or immigration, and am asked the usual questions, I tell those people that I have a wonderful job — globe-trotting in order to drive new and wonderful cars. I mean, how can you beat that?

On more than one occasion, an immigration officer or border guard has offered to trade places with me. I have respectfully declined.

Today, I will tell you about the 2020 Audi Q7, a terrific car. I learned all about it, plus a raft of other Audi vehicles that I will report on in future, during a recent trip to Germany and Ireland. I was introduced to those other Audis — the RS 6 Avant (it’s coming to Canada, finally), among others — when they were on display in what was once a railway station in Germany. Highly secretive (white sheets curtained off the cars from any prying eyes that might have peeked in the windows), it was all very cloak-and-dagger.

For instance, we had to sign confidentiality agreements to keep everything secret till such-and-such a date, and while we were allowed to keep our cellphones, Audi personnel put tape over the camera lenses. Industrial espionage is very real these days, and nobody takes any chances. The automobile industry is highly competitive and nothing can get out or else a competitor will steal it.

I saw, for instance, an Audi that might have been the only one of its model line in existence. I was blown away by it, but mum’s the word till the embargo is lifted. And by the way, although this was Audi in this case, all the manufacturers are like that these days. I’m getting very used to picking off the tape from my cellphone camera lens.

The Q7 drive in Ireland was much more casual. I was taught the ins-and-outs of the car, could take all the photographs I wanted and actually got to drive the car.

One of the first things they gave us, by the way, was a rubber band that we were required to wear on our left wrist to remind us to drive on the left side of the road, which is sometimes easier said than done. I’m getting better at it, having been to England a number of times now, but I’m still gun-shy at the thought of driving on the left side on an expressway. Two-lane country roads I can handle; but six-lane highways? Not yet.

Fortunately, our drive in the Q7 was around the Ring of Kerry in southwest Ireland, a very touristy part of the country. The drive was about 180-kilometres long on winding roads that were very narrow in many places, which made squeezing past the tour buses we encountered interesting, to say the least. There are no road shoulders, or few. Vegetation frequently grows high, right beside the road, which makes looking ahead almost impossible. 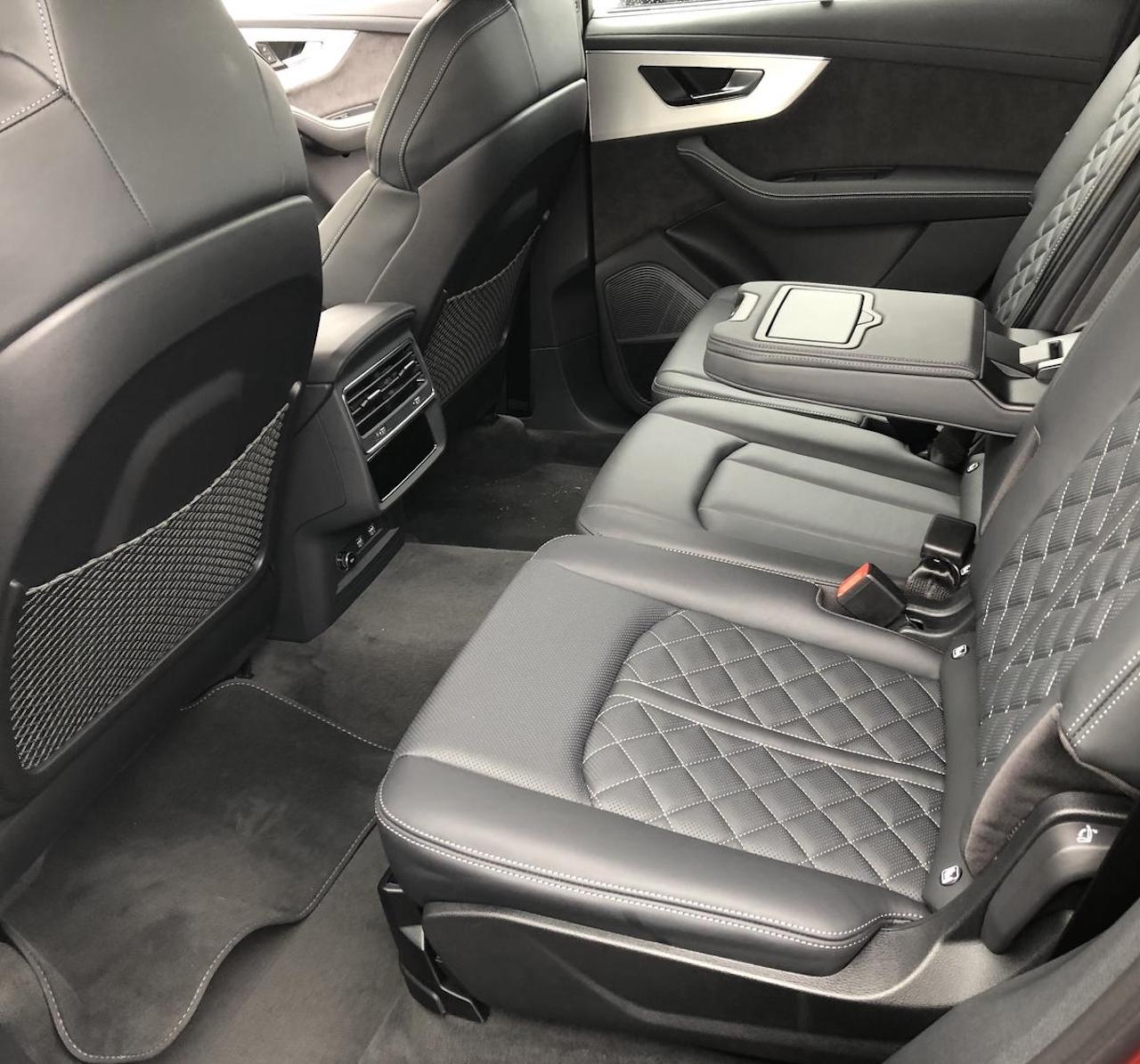 On more than one occasion, I whipped around a curve to find a car or two almost stopped because they were following a cyclist, who was right in our path. (The Audi’s brakes performed perfectly, by the way.) As cyclists had as much right to be there as the cars, it sometimes took awhile to find a stretch of road long and straight enough for all of us to scoot past. The cyclists usually rode tight to the side of the road but, as mentioned previously, the vegetation combined with no shoulders made coexisting a challenge.

OK! The Q7 we drove in Ireland was a model that had undergone some refreshing. There were changes made to the engines, the lights (we’ll get laser in Canada, which increases lighting range significantly), the interior and the front/rear fascia.

This second-generation, three-row crossover (five or seven seats are on offer) has been on sale since 2014 and will be relaunched in the first quarter of 2020 as a result of being updated and tweaked. When I say tweaked, I mean, for instance, that the new model is 5,063 millimetres long, which is 11 mm longer than previous models. The wheelbase (2,994 mm), width (1970 mm) and height (1,741 mm) remain unchanged.

Engines earmarked for Canada are the 2.0 TFS1 and the 3.0 TFS1, which is a 3.0-litre turbocharged engine that replaces the 3.0-L supercharged and produces 340 horsepower and 368 lb.-ft. of torque (zero to 100 km/h in 5.9 seconds). There is also a mild hybrid system of 48 volts that injects up to 250 kW into the mix. Add a belt-driven alternator-starter to capture kinetic energy from braking, and a system whereupon the engine will shut down when the car is coasting (and this can happen when you’re going as fast as 160 km/h), and you have a highly efficient, environmentally friendly automobile.

In our briefing, we were told the Q7’s operating system is now fully digital, the interior is spacious and the luggage compartment is versatile. That last bit means if you fold down the backs of the second and third rows of seats, the car’s cargo capacity can grow exponentially, starting at 865 litres of cargo and going on up to 2,050.

Described during the briefing as an “on-road vehicle with off-road capabilities,” the Q7 offers up a choice of three suspensions: the standard steel spring suspension and optional air suspension and air suspension sport. There are seven Audi Drive Select driving modes, including two for off-road.

Now, in my reports, I have frequently pooh-poohed the off-road capabilities of the magnificent cars we feature here in Wheels because who in their right mind is going to drive one into a lake? I had my mind changed for me in recent weeks, however, when — and I reported on this just last week — I drove around a corner in California to find the road gone and a gully between me and the resumption of the road 50 metres (or so) away. That car handled the gully with ease after I selected an off-road mode, and I’m sure the Q7 would react accordingly if faced with the same challenge.

OK, let’s go inside. It’s really neat in here. First off, the seats are totally comfortable. You can sink down in them and settle back right away. You can’t drive properly, whether on road or track, without feeling comfortable and content. The second row is spacious and there’s plenty of room for legs that are as long as mine.

The driver, once settled, sees two pop-up monitors — the top one (10.1-inches wide) is for infotainment and navigation and the one on the bottom is for climate control and other things, such as writing down a location for the nav system. There’s Wi-Fi and an Amazon Alexa voice-recognition system. You can look at a map and keep an eye on the speedometer, both of which (plus a tach) are right behind the steering wheel in a 12.3-inch-wide virtual cockpit. Very functional and friendly.

The Q7 offers all-wheel steering (yes, the rear-wheels can turn in certain circumstances) for more stability and agility. This can come in handy if you have to make a U-turn because it just takes 2.4 turns of the steering wheel (instead of the previous 2.9 turns) to go full lock.

And there are more than 30 driver assistance systems ranging from long-range radar to active cruise assist and trailer assist.

Pricing and final specs will not be made public until closer to the relaunch, but there will be three trim lines, and Audi Canada says the pricing will be similar to what came before, meaning the low end will start somewhere in the vicinity of $65,000.

The new-and-improved, refreshed, updated — whatever you want to call it — Audi Q7 is a gem. It rides like a dream and the handling is exactly what you would expect from Audi. Plus, it’s a looker. If you’re in the market for a new car, it’s worth checking out. My driving partner (Peter Bleakney, who previously wrote for Toronto Star Wheels, by the way) and I were both impressed. I’m sure you will be too.