The second-generation Nissan all-electric car looks much more mainstream, but now offers a range of up to 241 km with a starting price of $35,998.

The Leaf is already the best selling all-electric car in the world, with 5,400 models purchased in Canada and more than 283,000 globally.

But Nissan knows that except for maybe small crossovers, no segment is evolving faster than electrics.

Set to go on sale early in 2018, it was more than time to bring on the second-generation Leaf. 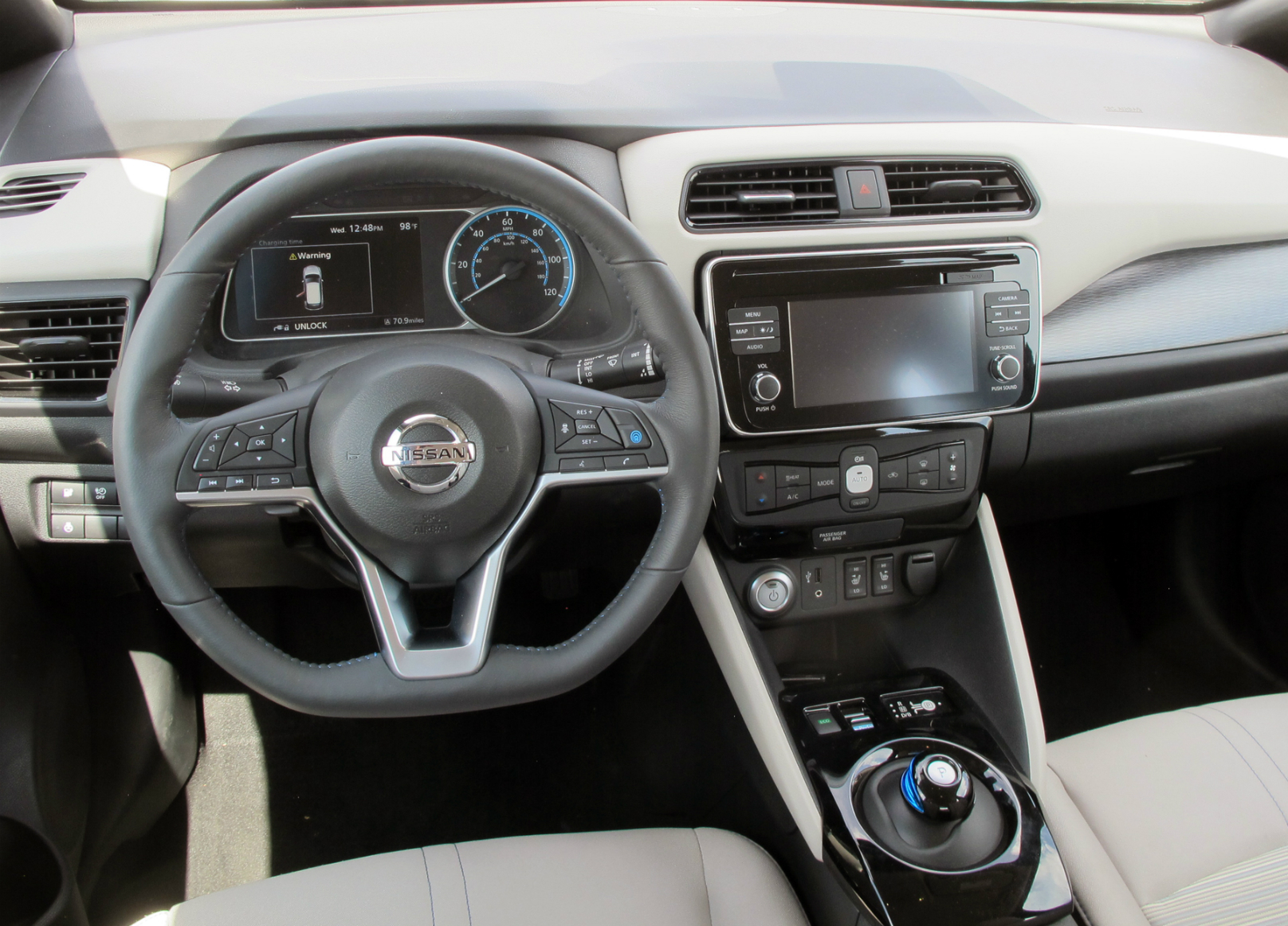 Propulsion is by a new electric motor producing 147 hp (up 40 per cent) and a meaty 236 lb/ft of torque (up 26 per cent) driving the front wheels though a one-speed direct drive power takeoff.

The new 40 kWh lithium-ion battery pack is the same size as the first generation, but is 67 per cent more power dense, resulting in a range of up to 241 km.

Charging time is 16 hours with a 110-volt outlet, eight hours with 240-volt setup, with the bonus of an 80 per cent charge in 40 minutes using a Quick Charge system.

Canadian specifications are still being worked out and will be in place when the 2018 Leaf goes on sale next spring.

But here’s what we do know.

Canadian pricing will start at $35,998, not including applicable provincial subsidies, and will feature standard heated front and rear seats, heated steering wheel and battery heater. Also standard in Canada is a level 1/Level 2 (120v/240v) charger cable.

Overall styling is a refreshing return to normalcy with the lozenge look of the first-gen Leaf dropped and replaced with a hatchback appearance complete with signature Nissan “floating roof”, front faux “V Motion” grille and boomerang lighting treatments.

But the design is also very aerodynamic with a drag co-efficient of 0.28, thanks to a blended in upper rear spoiler and a bottom rear diffuser.

One major change is a reconfiguration of the front charging port that is now at a more convenient 45-degree angle.

Inside, Nissan’s “Gliding Wing” design language results in a remarkably uncluttered cabin, punctuated by bright blue stitching on the seats, door panels, armrests and steering wheel. The blue color is carried over to the start/stop motor button and the toggle-like shift knob.

The front console is all new with tandem dual cup holders between the driver’s seat and front passenger seat. 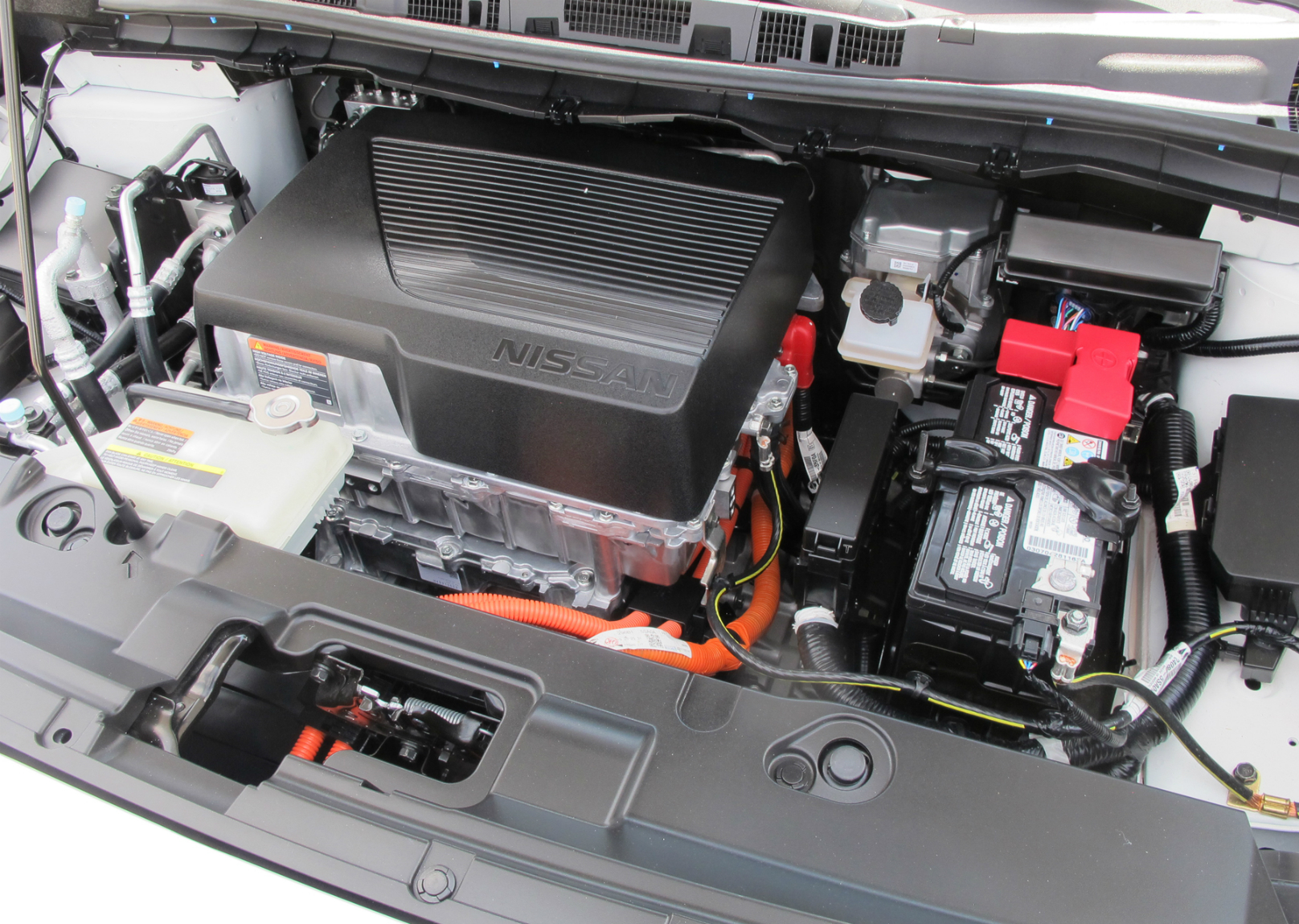 The idea was to create a new stowage area at the base of the centre console (ideal for a smartphone or wallet) as well as an easy reach power switch, a 12-volt power outlet and a USB port.

But where the Leaf stands out as a true next-gen EV is exemplified with all the technology packed into it, featuring what Nissan calls Intelligent Mobility.

This is a global initiative that focuses on how Nissan vehicles are driven, powered and integrated into society. 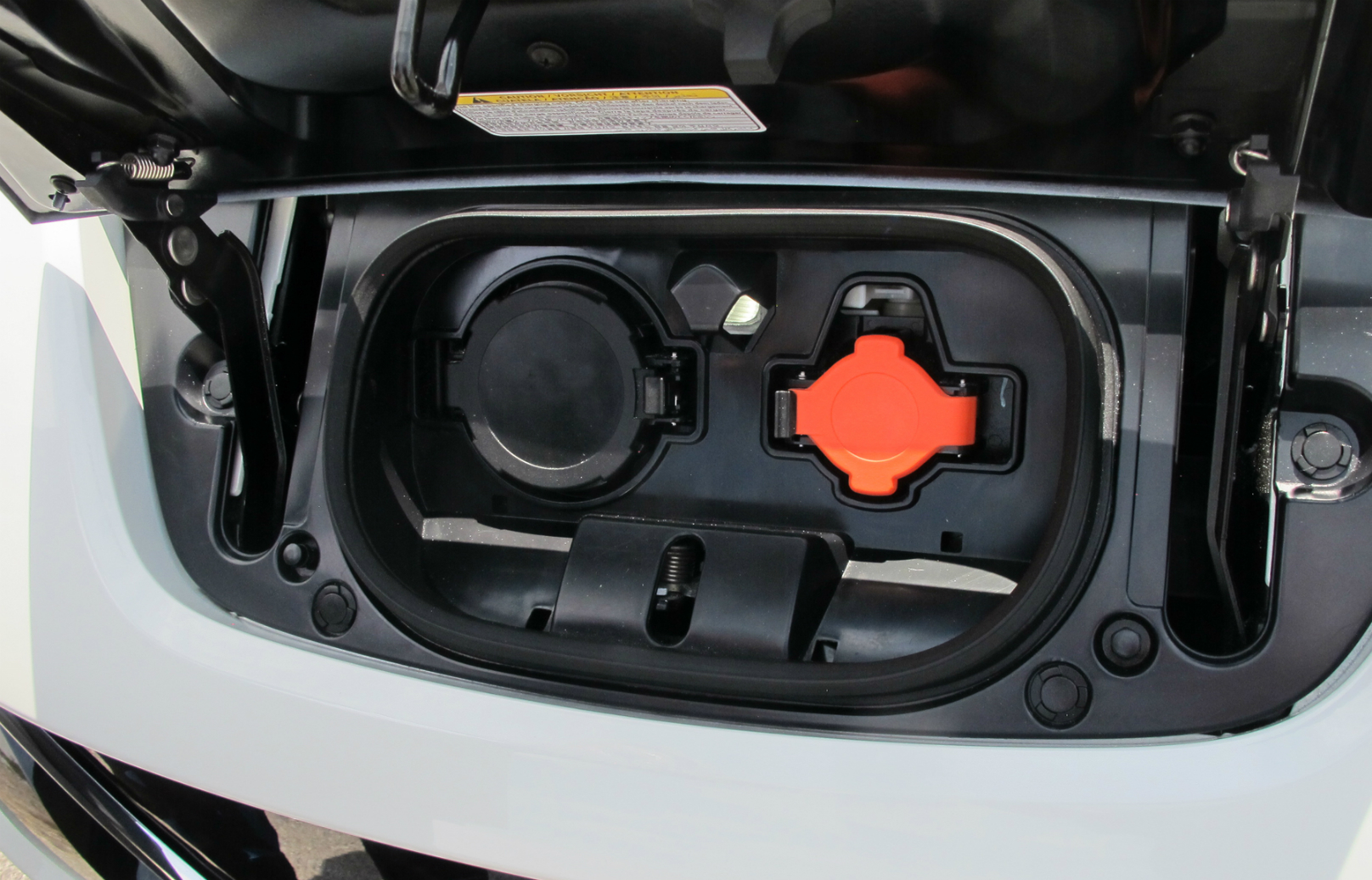 There were many journalists in Las Vegas for the media reveal, so driving was strictly limited to about 20 miles, which didn’t offer much time to sample the car.

But with ProPILOT activated on the freeway, the Leaf tracked smack in the centre between the road lines with none of the wandering I’ve experienced in previous semi-autonomous driving vehicles.

But perhaps the most intriguing technology is the e-Pedal that makes it possible to do 90 per cent of driving without using the brake pedal. 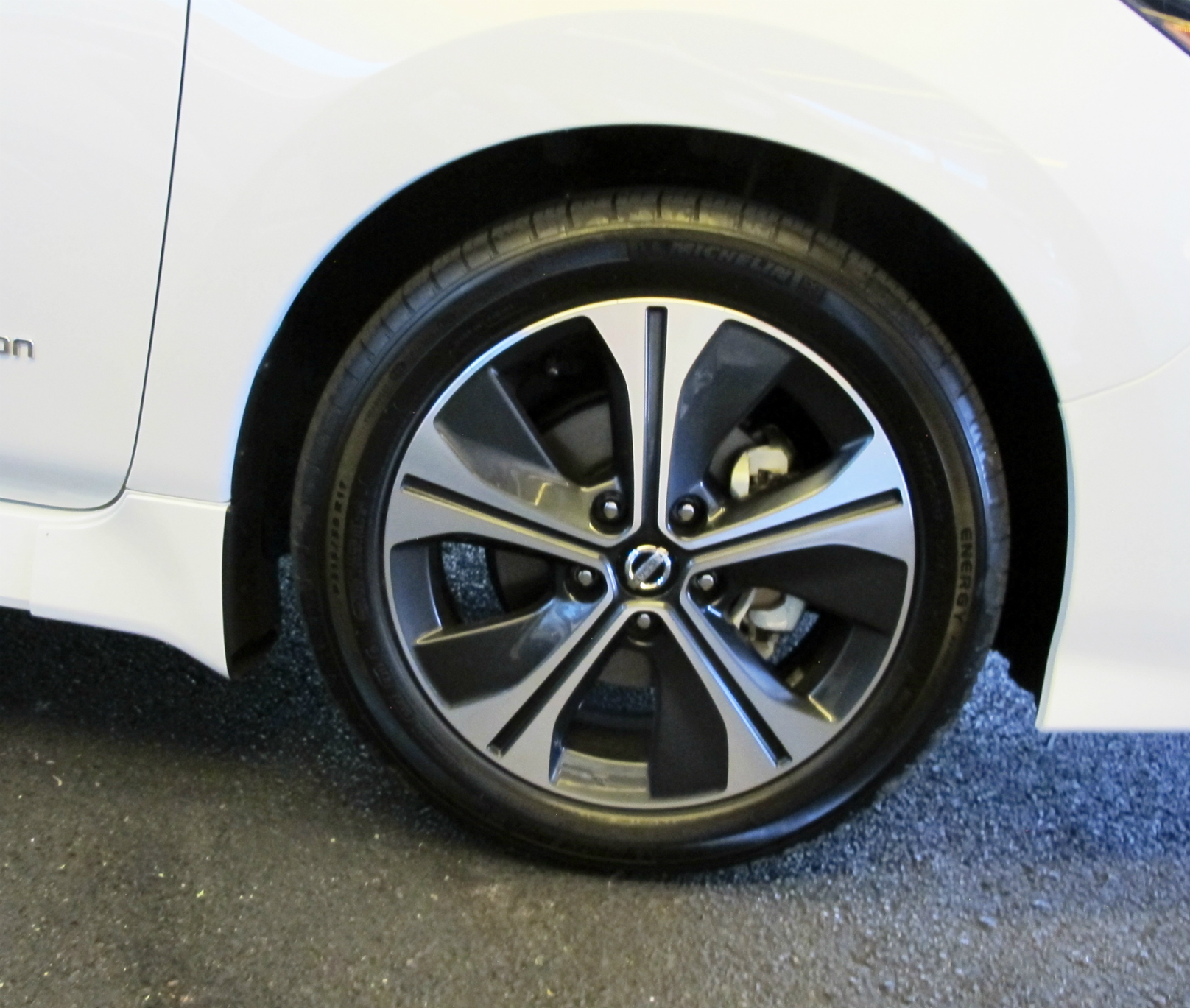 Believe it or not it is possible to accelerate and also brake using the single pedal on the right.

Stopping is accomplished by easing pressure so regenerative braking kicks in with the bonus of replenishing the battery.

You can come to a full stop, even on a hill, and the Leaf will sit there until you accelerate. However, when it comes to emergency stopping, the normal brake pedal must be used. 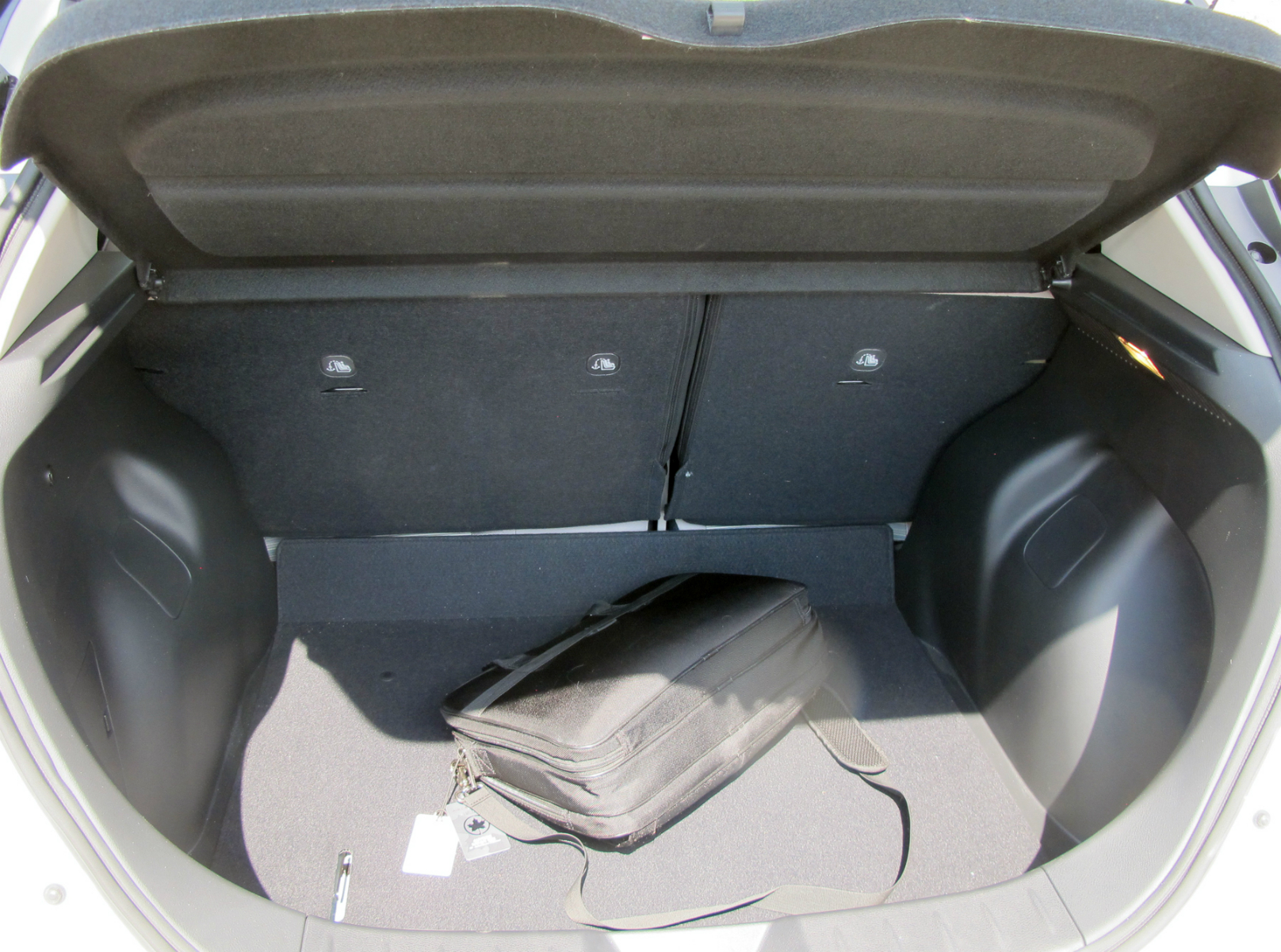 I had three other men with me on my drive and the Leaf was really quick in downtown Las Vegas, but more so on the freeway where it was virtually road noise free.

I was told torsion bar stiffness was increased by 10 per cent while the urethane bump stop for the rear suspension has been replaced by a rubber stop to reduce shocks and bumpiness when driving on uneven roads.

Time made it impossible to give readers true driving impressions, but Nissan is promising a full ride-and-drive event as soon as December, which suits me because I want to know how far it will go with the heater and defrost going in a Canadian winter. 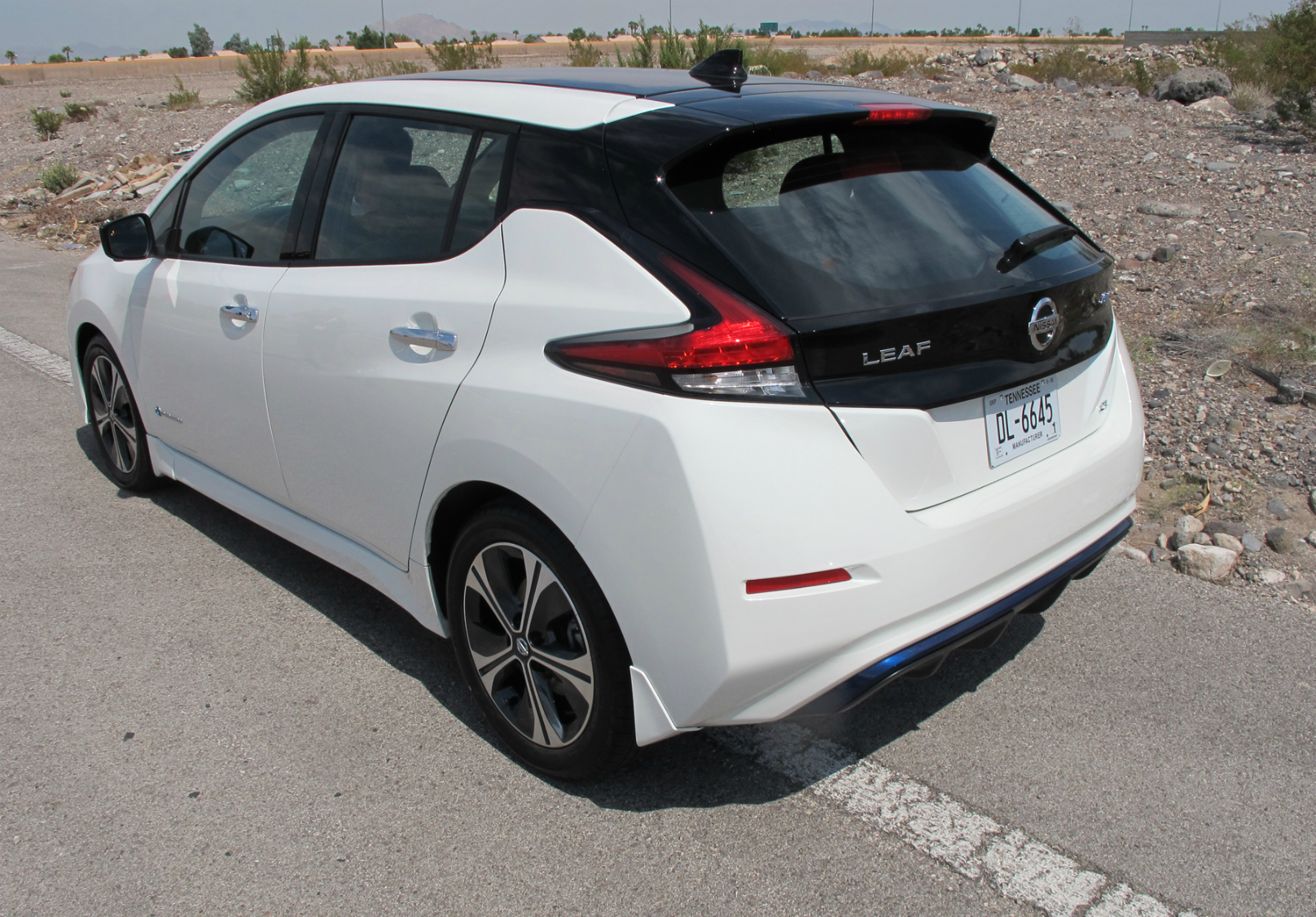 RANGE: Up to 241 km depending on temperature, terrain, driving style, accessory use, etc.)

PRICE: Starting at $35,998 not including provincial rebates where applicable