When the 2018 Leaf was introduced in Las Vegas earlier this year, the company made a big deal about its “e-Pedal”

First, what I originally thought was really a stupid idea turned out to be a great idea. Second, Nissan is doing everything in its power — it seems — to make the driving experience less stressful. Not easier; just more relaxing. Finally, the automaker is intent on emphasizing the EV-ness of the Leaf, rather than continuing to talk about it as being just another car, albeit one with an electric motor.

Nissan is on the verge of a record five years of continuous sales growth in Canada with, as of the end of November, 125,590 transactions. Its best-selling car is the Rogue, with 40,399 sold. The Murano is next with 13,833 deals made. The Leaf is at the bottom of the pile with less than 1,000 sold through November, but the company is optimistic about growth, and to date, there are already more than 800 pre-orders for the 2018 car that should be in Canadian showrooms early in the new year.

When the 2018 Leaf was introduced in Las Vegas earlier this year, the company made a big deal about its “e-Pedal” which would eliminate the necessity of having a driver move his right foot from accelerator to brake pedal and back again. This e-Pedal, activated by a switch, could speed up the car and/or slow it down, simply by increasing or decreasing pressure on the accelerator pedal. Take your foot off the pedal and the braking kicks in and the car stops. The bonus is that the energy from the braking is recovered and returned to the battery.

In Vegas, I got to drive the car for about a kilometre — on an expressway. I got going at a good clip and then took my foot off the “gas.” The car slowed down, all right — I almost got rear-ended. I was not a fan.

This will never fly, I told anybody who would listen. They want everybody who buys this car to learn how to drive a different way, which is nuts.

So, when I got into the car on Tuesday morning this week to take it out for a proper test, the first thing I heard from a Nissan engineer was that you shouldn’t use the e-Pedal on an expressway. “You’re more likely to use cruise control,” she explained, suggesting that the e-Pedal is really meant to help reduce fatigue when you’re driving around town or in stop-and-go traffic during rush hours.

It took me about two minutes to get used to driving with it. And do you know what? I became a fan. I’m normally a left-foot braker, because I don’t like having to move my right foot from accelerator to brake when I’m driving an automatic. This, then, eliminates me having to use my left foot.

If you’re rolling along and the guy in front of you slows down, no longer do you either have to coast or touch the brake. You just ease back on the throttle, and when he picks up speed again, you just accelerate to stay with him. If he stops, or you come to a light (and it takes a wee bit of practice to get used to estimating how long it will take the car to stop), just take your foot off the pedal and the e-Pedal automatic braking does the rest.

I think, when everything is taken into consideration, that the e-Pedal is the best thing about the 2018 Leaf.

Now, back in 2011 when the Leaf became the first mass-produced, commercially available electric car, it was marketed as a global car that anyone could buy and use. That was its image. And it became the best-selling EV in the world, with 293,000 cars sold to date. 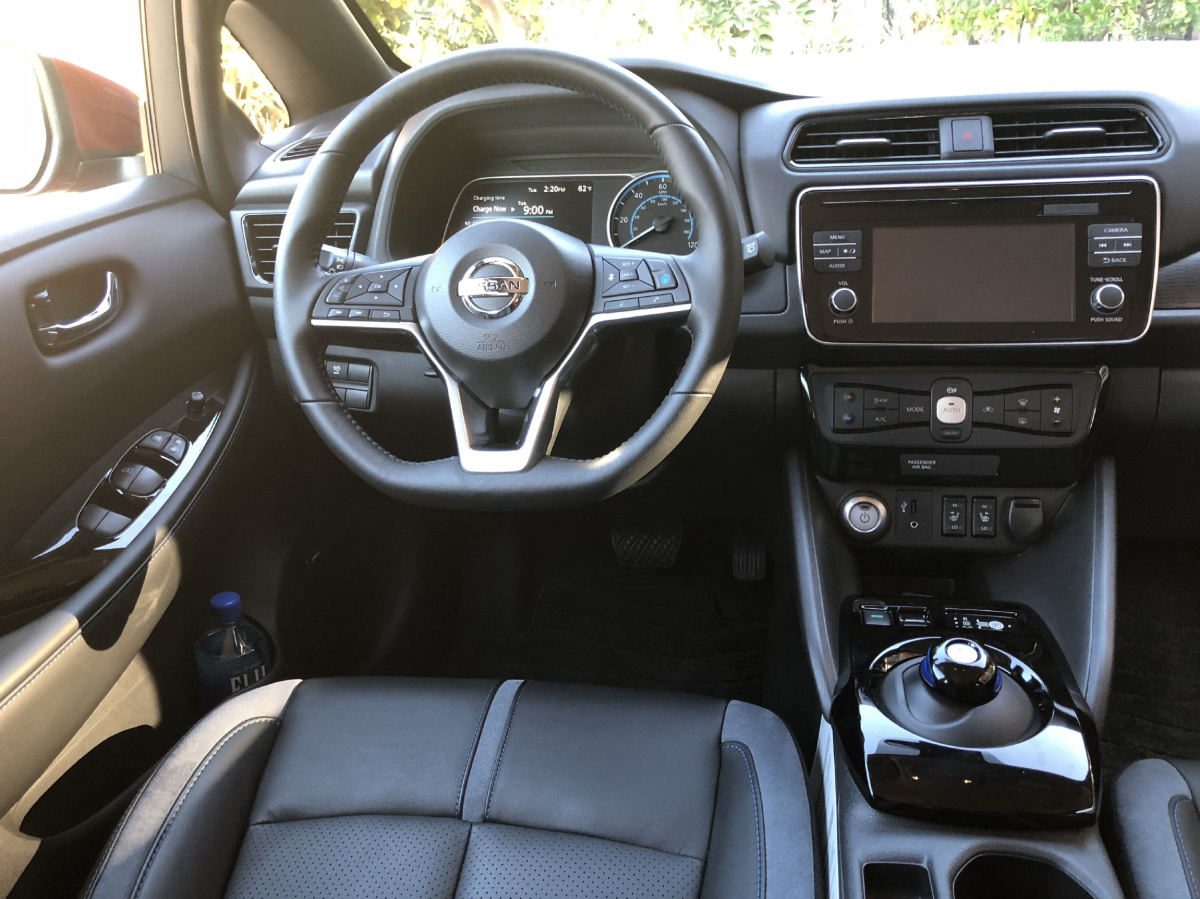 According to Owen Thunes, Nissan’s EV powertrain manager, consumers have certain expectations about the evolution of a car like the Leaf — the battery, the range and so on. “We already have a basis from our customers who understand how an EV works, so we’ve decided to give them more of that EV feeling,” he said, before expanding on that thought in an interview with the Star.

“Our customers tell us that they really like the EV launch experience, and they love the quietness and smoothness of the ride. In 2013, when we came out with more regeneration, they really liked that. We’re adding the e-Pedal and ProPILOT assist, to give the Leaf more EV-ness. Call it the evolution of the customer, the evolution of the technology, and the capacity of the vehicle to expand more. We think it will pay big dividends for us.”

The ProPILOT driver-assist technology is only available on the SV and SL models, and it has all the bells and whistles you’d expect from an artificial intelligence system that helps you drive the car: intelligent cruise control, intelligent lane intervention, automatic emergency braking and pedestrian detection (emergency braking is standard on all models, by the way), rear-cross traffic alert, NissanConnect with Navigation (there’s a seven-inch display screen on the dash) and more.

Intelligent cruise control, for instance, lets you determine the speed you want to go and the distance you want between you and the car in front of you. If you’re driving in a traffic jam (think Gardiner Expressway in the morning, or the Don Valley Parkway or 401 in the afternoon), your car will slow and speed up in tandem with the car in front. If that car stops, yours will, too — and will start again when it does — unless you’re stationary for more than three seconds. Then you have to reactivate the system.

Thunes said the steering-assist system is different than other lane-intervention systems, most of which “bump” you back into your lane. This Nissan system is one that’s lane-centring. Once the system detects the lane markings, it will keep the car in the centre of the lane. But the key is the detection of the lane markings. It won’t work, for instance, when snow of the kind that hit southern and eastern Ontario this week covers them up.

And it’s a hands-on system. If the system detects that your hands are not on the wheel (because you’re texting — naughty! — or you’ve fallen asleep or you’ve fallen ill), it will give you a visual warning first, then an audible one (you’ll hear a chirping sound), then a siren that will ring inside the car, and finally, it will turn on the car’s emergency flashers and bring it to a halt. So, you have to keep your hands on the wheel. 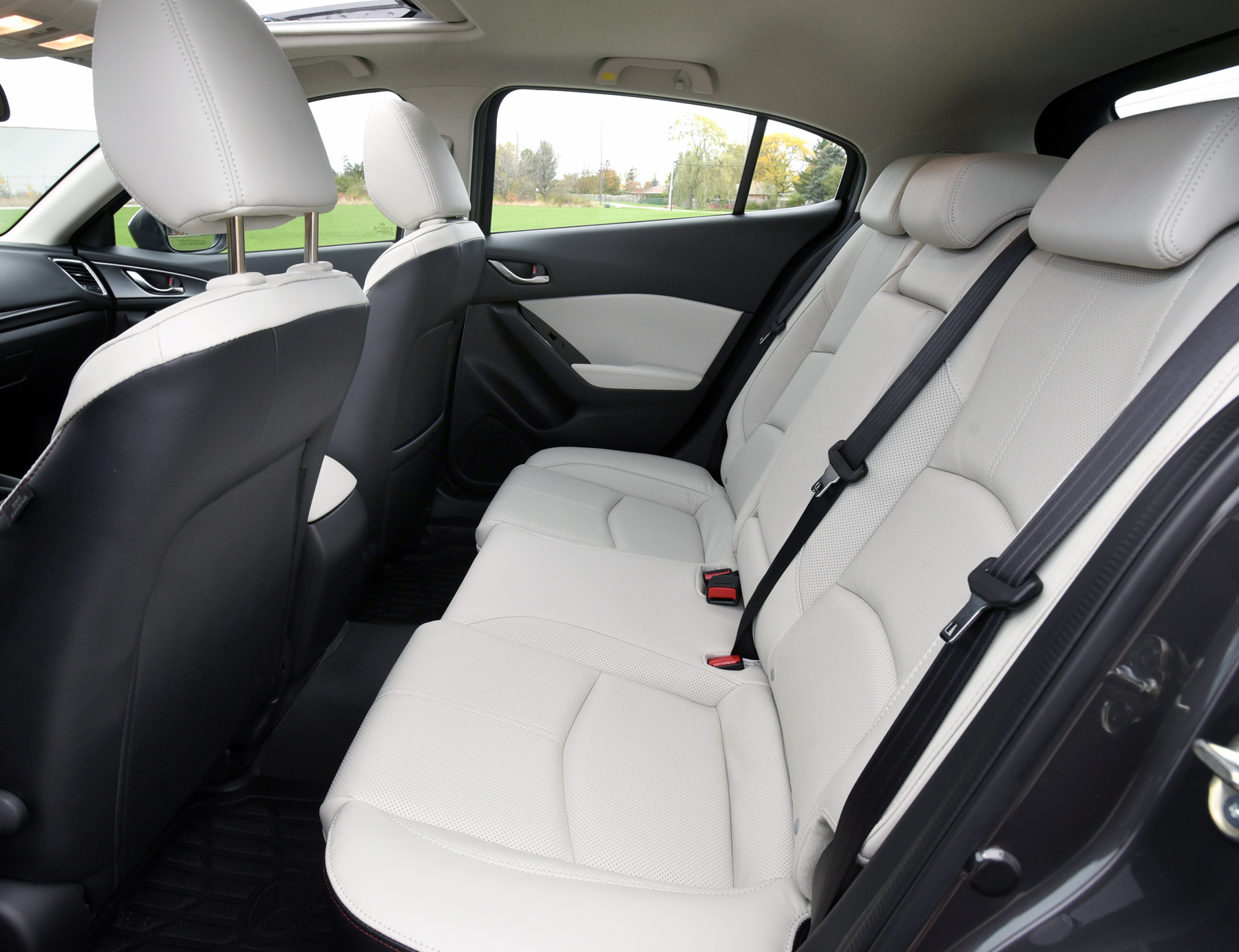 Of course, just like cruise control systems, if you want to override it, just tap the brake. Or don’t even activate it.

Now, I have a spot of trouble with this. A system like this should either help you or not. For instance, I kept in touch with the steering wheel by laying my hands on the wheel at the bottom. I could feel the wheel turning and adjusting itself as it kept the car in the centre of the lane. I was concentrating on what was happening and ready to take over if there was a problem.

But that wasn’t good enough. I got warning signals quickly that I had to have both hands gripping the wheel — or else. Which meant I had to hold the steering wheel, and I don’t know about you, but when I do that, I want to drive. So, I felt a disconnect there.

The car has two “normal” drive systems — the D range, in which the car feels like a traditional automatic vehicle and behaves like one, and the B range, which is like the D except that as you start to lift off the accelerator, you get more deceleration. To be honest, I don’t see the reason for the B range, because when I drove the car, I was either in D (out on the expressway, with the cruise control on) or with the e-Pedal activated the rest of the time.

All of these systems worked well as we drove around the highways and byways of northern California. The vineyards are everywhere — the Napa Valley is famous for its California wines — but evidence remains of the wildfires that roared through this region earlier this year. We came across work crews cutting down damaged trees and we drove past a winery where a barn remained but there was nothing left of the owner’s house except a fireplace and chimney.

The Leaf, like all electric cars, can make a standing start just like a top-fuel drag racing car, but then, after the initial burst of speed, take a while to gain more. We timed the car going from zero to 100 km/h, for instance, and it took 10 seconds, which is not exactly John Force warp speed. Once going, however, it holds the road well. It’s a smooth ride.

And it’s very responsive. Without going into details, other than to say it wasn’t my fault (I have witnesses who were in the car while I was driving), the Leaf missed being creamed at an intersection by that much. The only way I could avoid a crash was to turn hard right, floor it, and then turn left to get back into my lane and not smash into a line of parked cars. It was like a slalom in an instant; the car passed the test with perfect marks. Whew!

I can’t say that the Leaf turned heads, but it looks like a real car. Don’t laugh; the original Leaf back in 2011 looked … different. Like it was saying, “Hey, I’m an electric car.” The new Leaf is, when you get right down to it, very attractive and fits right in.

The visibility in the cockpit is excellent and there’s a lot of space up front and in the back seat. Older people will find it a bit difficult to get in and out, though. That’s a fact of life. Once in, it’s a comfy ride. But then, getting out is something else.

∙ The portable L1/L2 charge cable (standard in Canada) supports both 120V and 240V outlets. Charging efficiency has been improved, but at the end of the day, it will still take a minimum of a half hour to get enough juice into the 40 kW battery (up from 30 kW in 2017) to continue driving.

∙ Speaking of charging, there are now more than 5,000 charging stations in Canada, the majority in Ontario, Quebec and British Columbia. Drive one in the Maritimes or on the Prairie at your peril. 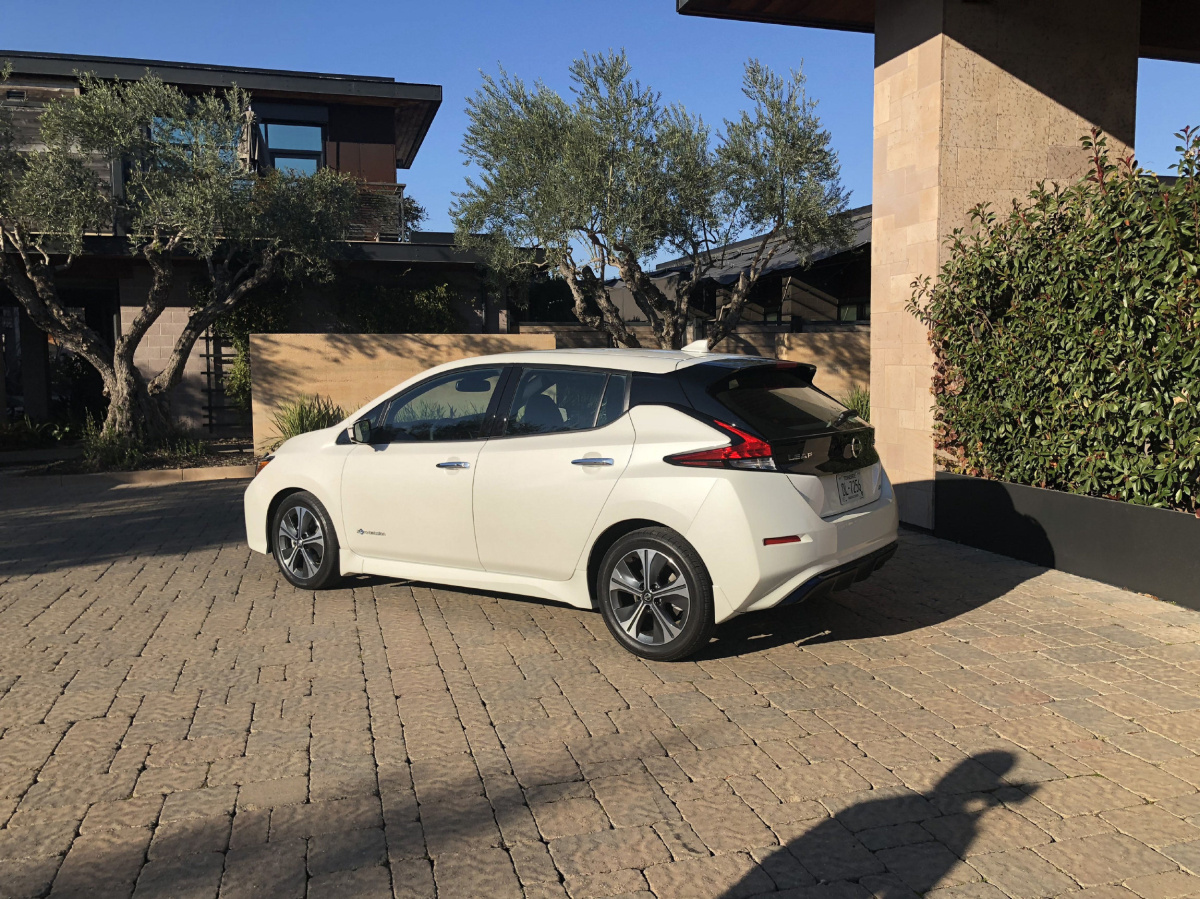