GTC4Lusso is the Most Day-to-day Ferrari Yet

Former Ferrari Chairman Luca Cordero di Montezemolo is alleged to have said when his company launched the Ferrari FF back in 2011, the first true four-seat Ferrari, that he wanted a Ferrari in which he could take himself and his family on vacation.

True or not, it’s still a great story.

Ferrari has so far resisted the siren song of the SUV, but that won’t last long — theirs comes out late next year.

Meanwhile, here is the successor to the FF, and it is the biggest, roomiest and certainly most day-to-day-liveable Ferrari yet, the GTC4Lusso.

It is on sale at your friendly local Ferrari dealer now, starting at $338,588.

When I mentioned that this is the first “true” four-seat Ferrari, I recognize that before the FF came the 612 Scaglietti. But its coupe roofline made things very snug in the back seat. 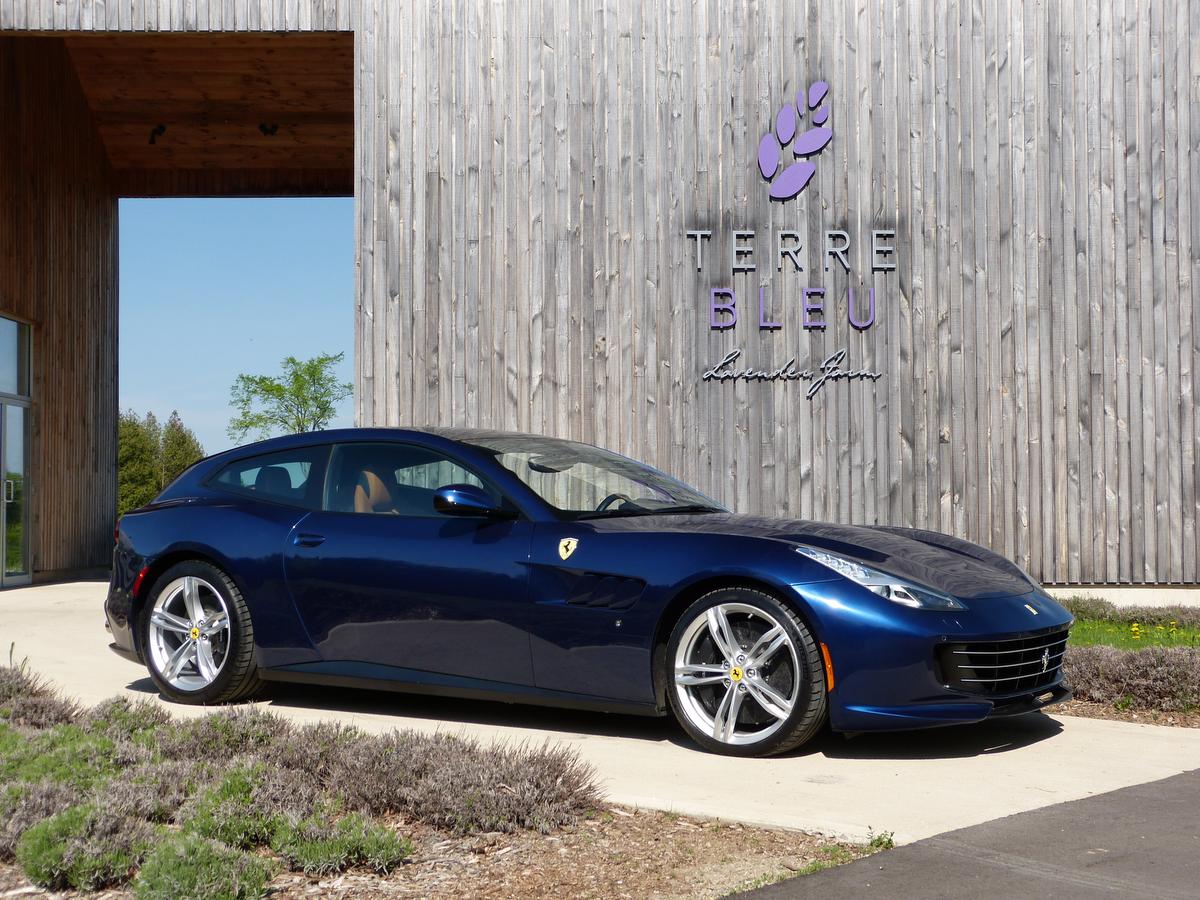 The FF and now the GTC4Lusso are kind of predecessors to the Porsche Panamera station wagon — er, Panamera Sport Turismo. All are proper four-seaters.

Through the good auspices of local Ferrari dealer Remo Ferri, Ferrari North America kindly shipped a GTC4Lusso from New Jersey for my drive to the annual car show in North Bay, Ont. It was a classy way to get anywhere and, needless to say, it was the hit of the show.

The GTC4Lusso comes with full-time four-wheel drive and the traditional 6.3 litre V12 engine. Essentially the same car is available at a slightly less elevated price as the GTC4Lusso T, the “T” referring to a 3.9 litre V8 Turbo engine driving the rear wheels. Decisions, decisions …

Surely for Canada, the four-wheel drive version makes the most sense, as Ferrari is deliberately trying to make their cars more year-round friendly, as Audi, Lamborghini, Porsche and corporate-cousin Maserati have done.

The GTC4Lusso has essentially the same structure as the FF, but with significant upgrades, notably in the interior.

They’ve carved out a bit more people space and swaddled it all in sumptuous leather. Lusso, after all, means luxury in Italian.

The seats fitted me perfectly and have plenty of adjustments for the rest of you.

There’s reasonable space for two non-NBA-roster adults in the rear seat (16 millimetres more leg room back there than in the FF) and a decent amount of cargo room as well — 450 litres with the rear seats in place, 800 with them folded down.

You can even order custom-fitted luggage to match the leather interior. 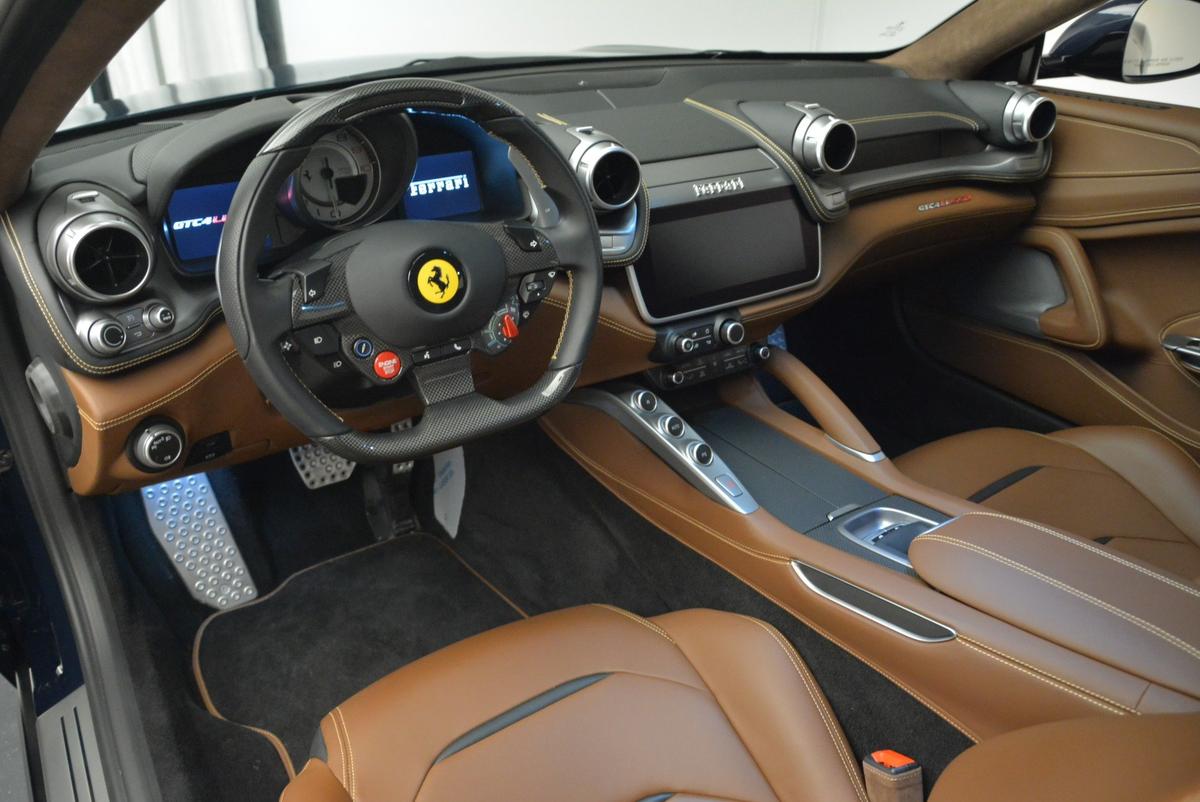 The dash is effectively all-new, with a massive (10.25 inch) central screen that allows you to do all sorts of things, provided you are not too busy exploring the car’s prodigious performance.

Presumably, that’s what the second eight-inch screen in front of the passenger is for, so they can mess with Apple CarPlay and a host of other techie stuff while you focus on driving.

As well you should. The V12 engine, looking gorgeous in its traditional Ferrari red paint, has been tweaked to crank out a bunch more cavallini — up from 660 to 690, both measured at 8,000 r.p.m.

What’s most important is that 80 per cent of that peak torque is on tap at 1,750 r.p.m., so breathtaking acceleration is but a stab of the loud pedal away.

That said, what’s a Ferrari engine about if not elevated engine revs? The sound as you approach the eight grand-plus red line is nothing short of “aural” sex. When you finish reading this, you really must go to the Ferrari website, scroll down on the GTC4Lusso page and click on “Start the Engine.”

The drive flows through a seven-speed dual-clutch transmission which you can let shift for itself, or you can manipulate the shift paddles as is your wont. Either mode works seamlessly.

Porsche 911 GTS is a year-round supercar

Caveat: the paddles are fixed to the steering column, rather than rotating with the wheel. Every time I get into a car that has one system, I seem to prefer the other. You will get used to it.

The GTC4Lusso’s four-wheel drive system has a variety of technologies including torque vectoring and a trick electronic differential, all of which conspire to direct drive torque to whichever wheel or wheels can best utilize it.

This is a pretty big car, but seems to shrink around you as you drive more quickly, thanks largely to this steering gear.

The on-centre steering ratio is a bit slower than you might expect in a super-sports car, but the technology more than makes up for this. It also makes the car less darty to drive when you are just cruising along.

Controls on any Ferrari will require some acclimatizing. No steering column stalk for the turn signals here, for example — little switches on the steering wheel spokes take care of that for you. Feels a bit odd at first, but they are exactly where your thumbs will be when your hands are in the proper quarter-to-three position on the wheel. You can learn.

The manettino (“little lever”) is a rotating knob in the lower right-hand quadrant of the steering wheel hub which allows you to select various settings for suspension, traction control and the like, allowing you tailor the car’s performance to the weather (“Snow and Ice” or “Wet” modes, for example), or to your specific needs and desires at the specific time and place. Makes you feel like you are Sebastian Vettel at the Montreal Grand Prix.

If it is at all sensible to talk about a “practical” Ferrari, the GTC4Lusso would be it. All the prestige and performance you could ever want, wrapped in an eminently practical and gorgeous body.

The blue paint is lovely. I think I’d still take mine in red … 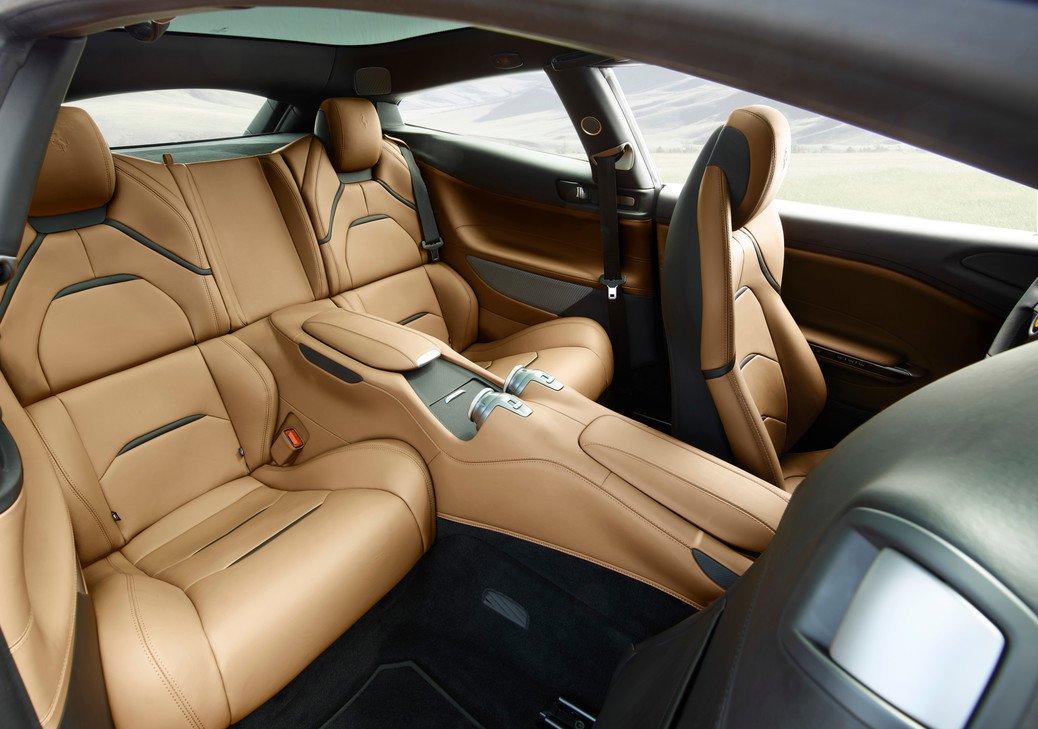 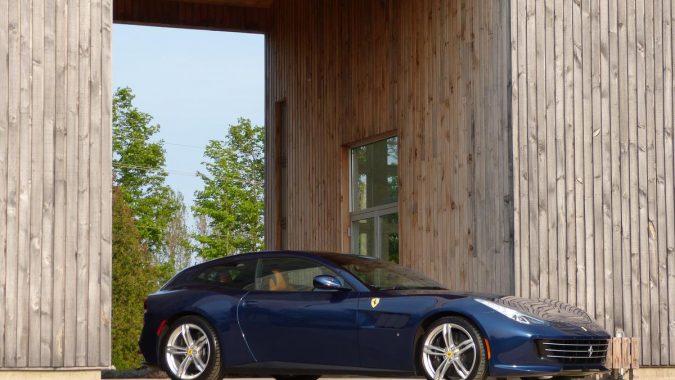 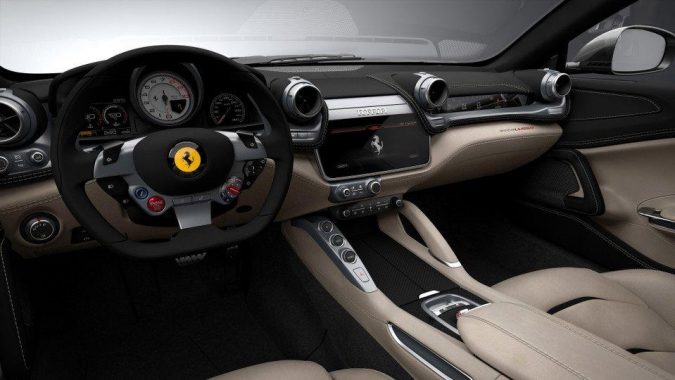