2018 Dodge Challenger and Charger are the Essence of Cool

Performance cars both have high style and curb appeal.

Lots of people love the appeal of vintage cars, but don’t relish the hassles of finding a technician who can service them, or the chore of locating ever-rarer spare parts.

Does that suggest a potential market for a brand new vintage car?

Not to put them down or anything, but two of Dodge’s performance cars might fall into that category.

Both were developed during the 10-year period when Chrysler Corporation and Mercedes-Benz were in a ‘marriage of equals,’ which was anything but — a story for another day.

What the tie-in with the German giant meant was that even cooking versions of Chryslers of the time had solid Mercedes engineering under the skin. Perhaps not quite state-of-the-Mercedes-art, but pretty darned good, including a well worked-out, fully independent suspension.

The ‘divorce of unequals’ came about during the economic crisis of 2007-2008, Chrysler eventually ending up in the friendly grasp of Fiat.

But the Germanic roots of certain models remain to this day. One example in the Charger and Challenger is the daft wiper switch on the end of the turn signal stalk which requires you to take your hand off the wheel to operate, which of course eliminates the advantage of a steering column stalk in the first place. Needless to say, this system made no more sense when Mercedes used it.

A wide variety of engines is offered in both cars, ranging from the 3.6-litre Pentastar V6, through 5.7- and 6.4-litre Hemi V8s, to the insane 707 horsepower 6.4-litre supercharged Hemi V8.

My Charger had the eight-speed automatic; the Challenger a six-speed manual.

While I put a fair whack of klicks on the Charger, a lot of that was a highway cruise to Detroit and back. I had more fun in the Challenger, although much of what I say speaks to both cars, with the proviso of the added length and weight of the four-door car. 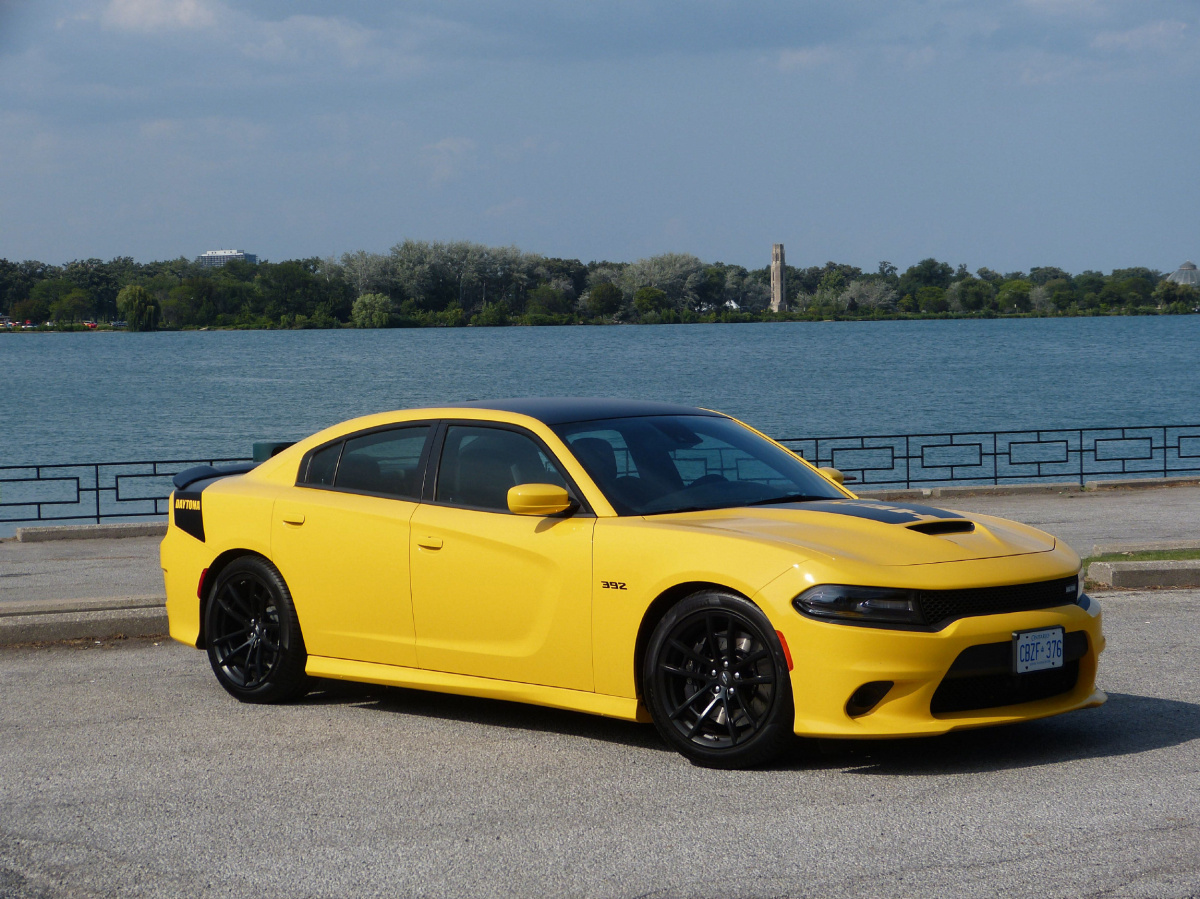 Chrysler has long had the best paint colour names. Sadly, the best ever — “Thanks Vermilion” — seems to have bitten the dust, but you can still go for “Yellow Jacket,” “Go Mango,” or “Torred,” and on Challenger, the wonderful “Plum Crazy” is still available. Must say I don’t know what “F8 Green Metallic” would be; the F8 key on my computer is neither green nor metallic …

There’s plenty of giddy up in either powertrain. As a friend of mine used to say, if your car goes 0-100 km/h two seconds faster than mine, then all else being equal, you’ll get to Montreal two seconds before I will.

But the engine is punchy and has a great exhaust growl.

The six-speed works well in the Challenger, with easy shifting and decent clutch take-up, although manual transmissions are clearly a dying breed.

Chrysler has had some issues with their automatics over the years, but the one in the Charger worked fine.

Handling won’t send any Porsche or Miata owners into paroxysms of joy, but the cars get out of their own way decently, and thanks to fat tires, cornering levels are decently high.

The Charger, being a muscle car coupe, has pretty awful rear three-quarter visibility. If you don’t know how to adjust your mirrors by now, better learn (hint: MUCH farther out that you were probably taught in driver’s ed) or you may have to rely on the blind spot detection system.

For all the traditional performance car aspects in both of these, all the modern conveniences are on hand to keep you connected to your world. And Chrysler’s touch-screen system is easier to work than most, with big, clear graphics and reasonably consistent control logic.

Unless you’d prefer to shut all this stuff off and just enjoy the drive.

Challenger is perhaps best known today as the car that LL Cool J (‘Sam’) drives on the TV show NCIS: Los Angeles. In a recent episode, his partner Chris O’Donnell (‘Callen’) made light of the fact that Sam loves his car.

“We got a new one last year!” Sam enthuses.

And Targa Newfoundland founder Robert Giannou is a multi-Challenger owner as well. He still has his original, but has also bought a newer model. Doesn’t drive his Porsche 911 much any more, which should tell you something.

What it tells me is that these cars, despite their age, have managed to continue to appeal to buyers of this sort of car. Especially in a category that is defined by style and coolness, it’s rare for vehicles to survive this long.

Must have something to do with them having ‘good bones.’ 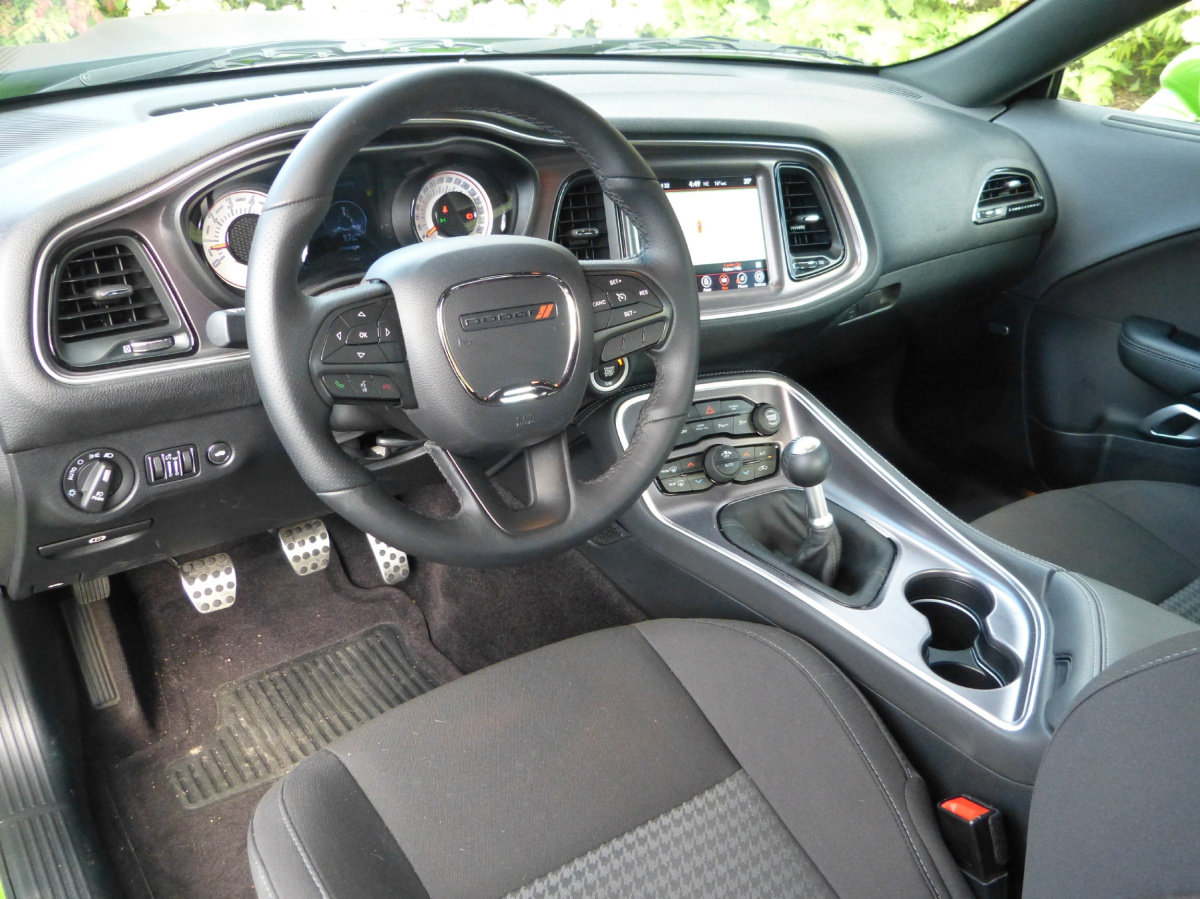