Don’t let the quiet looks deceive you; under the skin of the 2018 BMW M5 is one of the most potent performance sedans on the globe.

THERMAL, CA: The 2018 BMW M5 could not only be the “Ultimate Driving Machine,” but the “Ultimate” wolf in sheep’s clothing.

The French have a name for a car like this – bolide – or meteor, which the M5 becomes when you let it loose.

My encounter with the new, sixth-generation M5 took place at the BMW Performance Centre that is affiliated with the Thermal Club in Thermal, CA, a private race facility with three tracks totaling 5.1 miles.

BMW had assembled all its new products, from electric MINIs and i3s to an array of BMWs and even a Rolls-Royce Phantom (more on the Phantom to come).

Being the icon that it is, the M5 was hard to get my hands on, but I did later in the day.

Walking up to it, the M5 looks pretty much like any other of the four 2018 5 Series sedans, made more so by the M5 being in the standard, non-garish Alpine White paint (other tones optional). 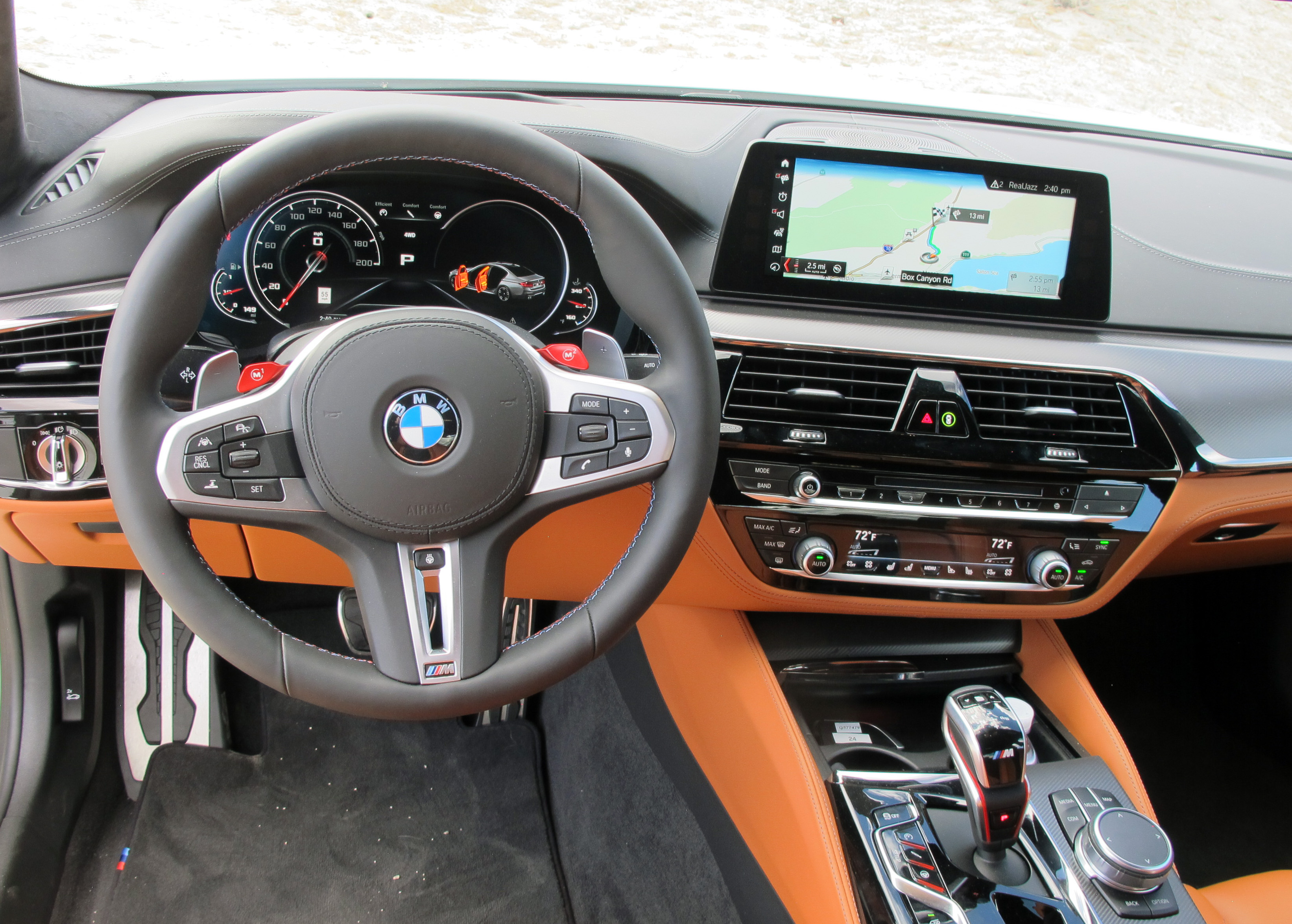 From the outside, the only way to tell the differences are the quad tailpipes and rear diffuser, discreet badging, M signature grille treatment and the large 20-inch M light alloy wheels.

Inside, there isn’t much difference from the other 5 Series either, until you notice two, small red toggles on the steering wheel in addition to the paddle shifters.

You can use them to preset two separate driving modes that individualize the engine, chassis and steering to desired performance at the touch of a finger.

To handle all this grunt, BMW uses an eight-speed automatic, probably because a dual clutch system couldn’t handle the stress. Gone is the manual transmission on previous M5s.

The all-wheel-drive is the M version of BMW’s xDrive system and as such, it’s set up to run primarily in rear-drive with torque going to the front axle when needed.

But you can, for high-speed tracks under closed conditions such as we had at Thermal, turn off the AWD for 100 per cent rear drive, but you should never do this on normal roads.

It takes too long to go over the myriad of ways to configure the M5, but basically you go into settings through the iDrive controller and choose from 4WD, 4WD Sport and 2WD.

On the centre console marked “set up” are three buttons for the engine, chassis and steering and you click through for Comfort, Sport and Sport Plus and dial in what you want from there.

Tracks have their place, but I prefer to drive in the real world, which includes stop signs, varying speeds and road surface not to mention on-coming traffic.

My route from Thermal to Desert Center was the Box Canyon Road, which winds through rising sediment cliffs thrust up from when the area was once a vast inland sea.

Deserted most of the time, this road presents a number of challenges — from long straights to fast, off-camber corners, which can catch you out as evidenced by the number of tire skid marks I saw.

For the drive, I put the engine and steering on Sport Plus and Comfort for the chassis (dampers), because that road was quite choppy in some sections. In a city or cruising on the highway, Comfort is all you really need.

Stopped on the road with no oncoming cars, I hit the gas and reached over 60 mph (US spec car) in what seemed less than 4 seconds, and I still had four more gears to go.

Response from the steering was prompt and the M5 went where it was pointed and there never was the sensation of grip being lost, thanks to the M AWD.

The M steering wheel itself had a meaty feel to it and it’s heated as standard.

Even though I opened the exhaust baffles, the M5 was quiet, that is until the pedal was floored and this glorious sound come out and was echoed by the canyon walls.

Because of the many vehicles available at the BMW “Test Fest,” my time with the new M5 was limited, but it made a heck of an impression.

If you’re thinking about getting the “Ultimate Driving Machine”, the 2018 BMW M5 is the answer. 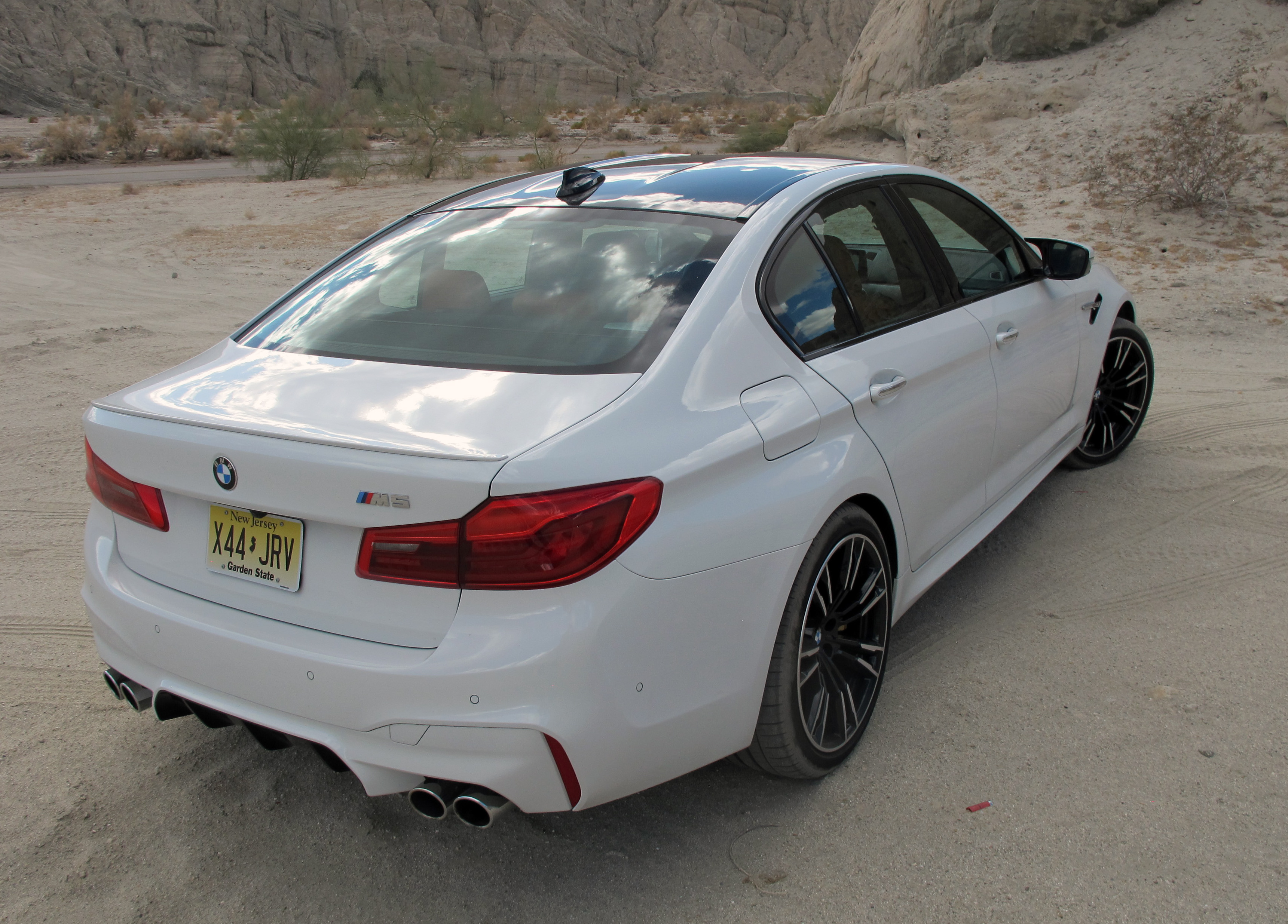