An enticing option for those that want to get into a practical hybrid without such a big hit to the wallet.

Lacey Elliott: One of my favourite things about the automotive world is seeing the vehicles adapt and change with each new generation. It feels like it was an entire lifetime ago, but when I was a young adult, the RAV4 convertible was top on my list for fun vehicles I would like to own.

Dan Heyman: Lacey didn’t mention this and while I’m not sure about how she feels, I’ll tell you this: there are a select few cars that cause snickers amongst my colleagues and myself whenever they’re mentioned, simply because while we know these cars are fine pieces of engineering and sell like hot cakes, they are the epitome of the “car as an appliance” vibe and that doesn’t always sit well. You’ve probably already guessed this, but the RAV4 has always been one of those cars…until now. It has made some great steps for this latest generation; but will that upset the RAV4 “purists”? You know, the folks that buy one whenever a new gen comes out? 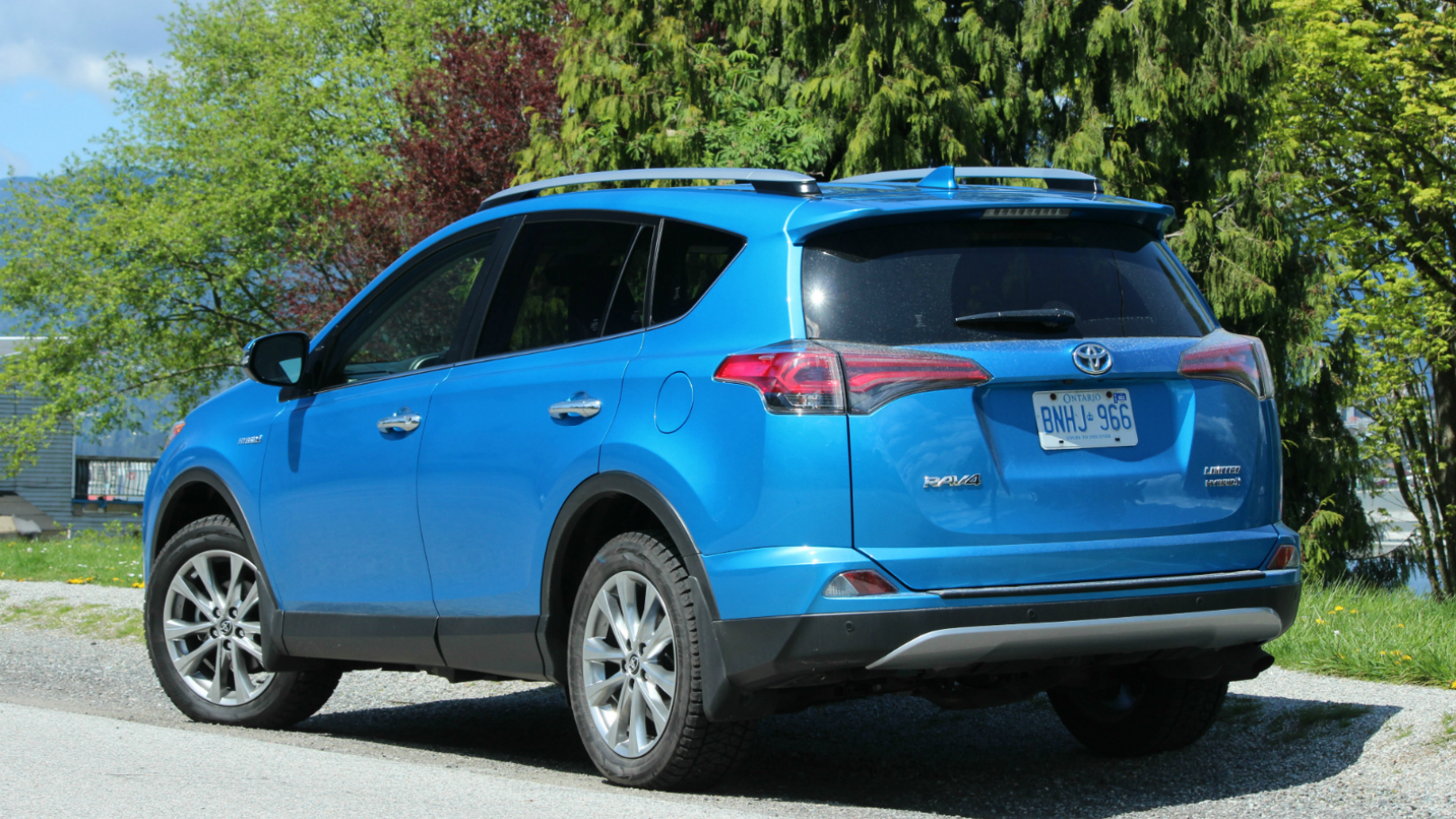 LE: Fast forward many years and the RAV4 is no longer available with a softop, but, it is finally getting a hybrid option.

I don’t think the RAV is so ‘cute’ anymore, either. It seems to have grown up, and still fits nicely into the Toyota family. Toyota describes the 2017 model as equal parts sport and utility.  I could not have described it better myself. It has a slightly rugged stance and aggressive curves, looking ready for any adventure you have planned for it. The sportiness comes from the sleek lines and sharp looking LED headlamps.

The 7.0” touch screen on this Limited trim is surrounded with a few buttons and knobs to give an updated appearance. It’s great to have a balance of both old school knobs and new touch screen technology.

If driving a hybrid vehicle is a new concept for you, there are some new systems that you will become very familiar with as you spend more of your time behind the wheel.

The Hybrid Synergy Drive system (HSD) is super easy to see thanks to the unique gauge cluster behind the wheel. This system shows you when the vehicle is charging and when it is providing power to the wheels. The energy monitor shows the use of the hybrid battery, gas engine and the electric motor generator. It displays real time information so that when you are driving, you can see exactly how the power is being used!

Now a more grown up vehicle, it makes sense that this little SUV is also better suited for more ‘grown up’ adventures. With rear seats that split and fold 60/40 and available hands-free power tailgate , finding room for my dog and my friends is very convenient.

DH: Not long after I sampled the RAV4, I had the chance to sample the all-new C-HR compact crossover. That car is an exercise in some pretty unique styling, but the RAV4 in its latest guise is not as different as you may think. Indeed, there have been times where I’ve seen what turned out to be a RAV4 approaching, after thinking I was seeing a C-HR. The RAV’s lights, the aggressive and streamlined front grille, the wheels and for out tester in particular, the Electric Storm Blue paintjob (available only on Hybrid models and with a name like that, you can understand why) all stand to separate this latest RAV from the older models. Now, only a handful of people will ever opt for Electric Blue, but the fact that it’s available just goes to show you that Toyota is trying to flip the RAV4’s image on its axis a little.

The interior, of course, doesn’t have quite the flare – no exterior colour-matching stitching or anything like that – but it remains a fairly upscale place, especially as you reach higher trim levels where soft touch and higher quality materials become more prominent.

Space-wise, I had no real problems aside from sitting a little high when up front; the rear seats provide a surprising amount of legroom and the tall roof means headroom’s pretty good, too. Speaking of the rear seats: they fold nice and flat, but unfortunately in Hybrid models – seen here – the load floor is never completely flat as they have to house the battery somewhere. It should be said, however, the fact that this is the only real sacrifice you have to make after transitioning to a Hybrid model is a feather in the collective cap of the engineers who found a way to package this thing.

The only thing I ask, then, is why didn’t they do a RAV4 Hybrid sooner? Seems like the perfect fit for the tech. 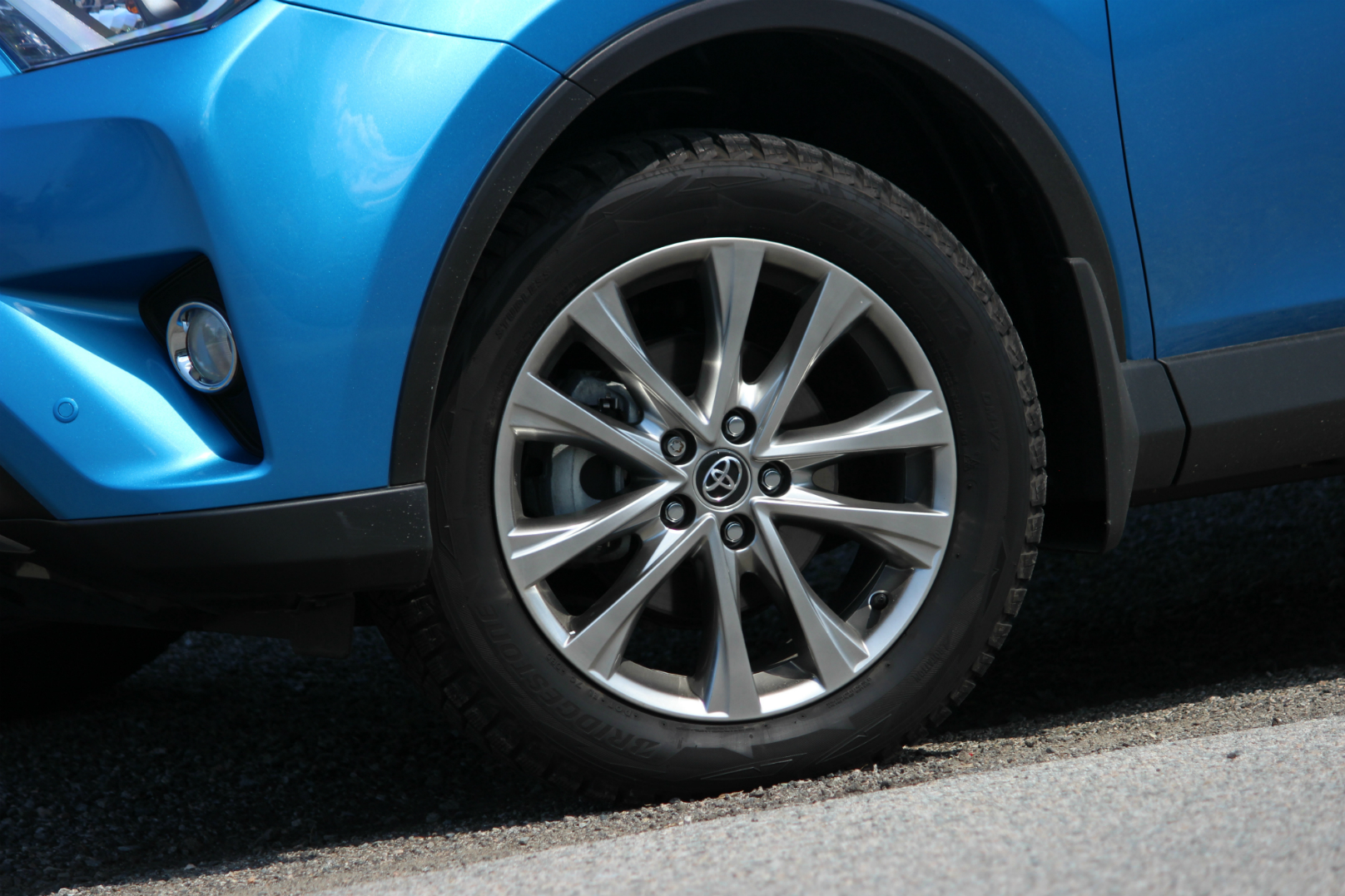 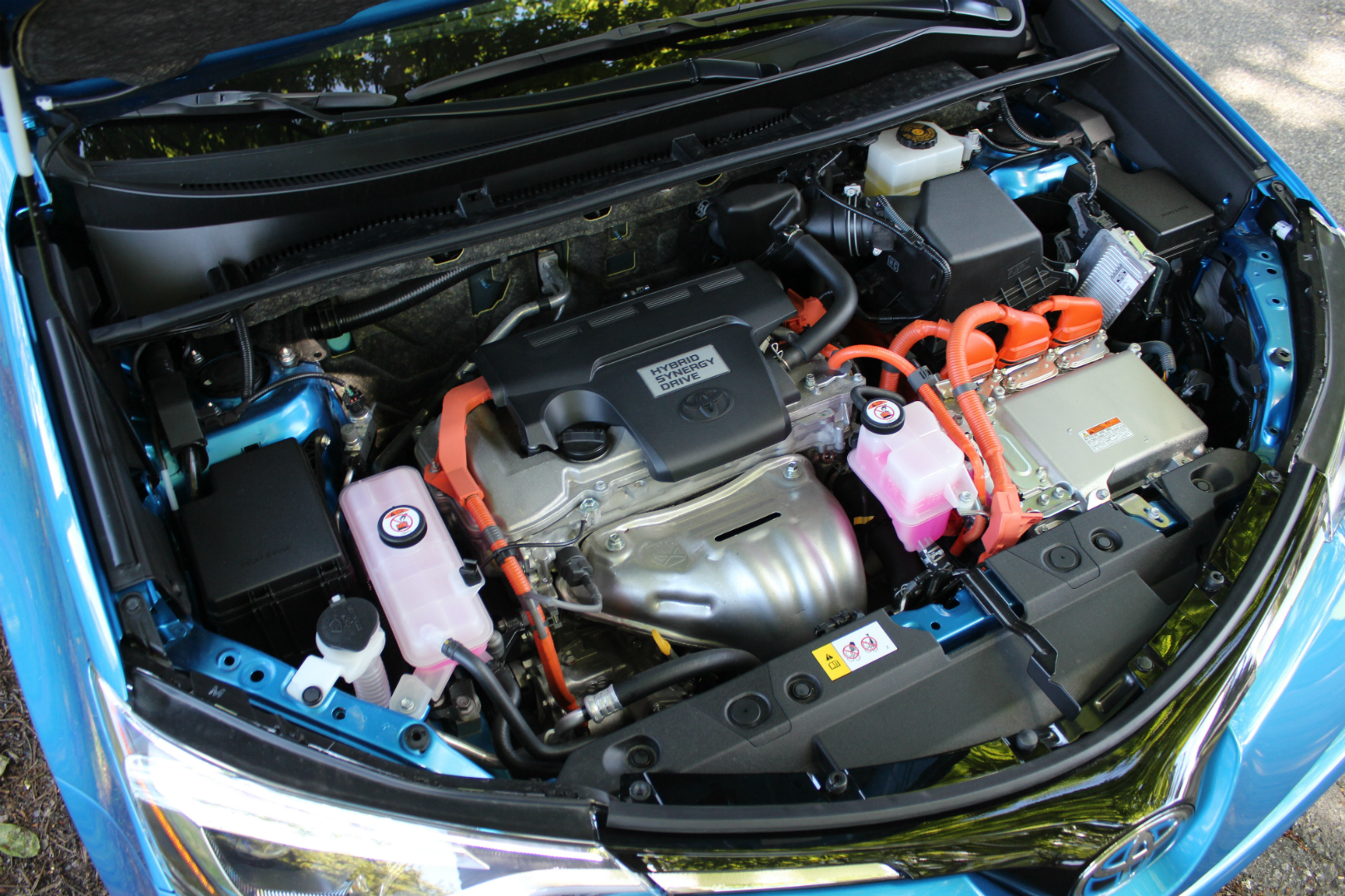 LE: Of course, one of the best parts about driving any hybrid vehicle is the fuel economy. This RAV4 is powered by an efficient 2.5L four-cylinder, Atkinson Cycle engine with a continuously variable transmission (CVT).  Matched to a powerful electric motor, power storage batteries and powertrain management systems, the combination delivers 194 net system horsepower. The hybrid is rated at 6.9 city and 7.8L on the highway. Compare that to the FWD that is rated at 10.0 ad 7.8.

The HSD seamlessly switches between the electric battery and the gas engine so that you have no idea the switch is even happening. On other hybrids, I find that the regenerative brakes can be a bit hard, but not on the RAV4.

The suspension is comfortable and the electric power steering feels a bit light. It is not the most fun SUV to drive, but I have nothing to complain about. There are many other reasons to buy this crossover.

The four available drive modes allow you to switch from Normal, Power, ECO and Electric Vehicle mode for shorter distances. This ensures you really can get the best fuel economy possible.

DH: While you’re never really going to get away from the fact that the RAV4’s CVT doesn’t make for the most exciting progress, it does provide smoothness and that adds a slightly more luxurious feel to the proceedings.

Contributing to that is the RAV4’s ability to cruise in full-EV mode; no engine means the only noise you’re really hearing is the tires smacking the pavement below you and the occasional wind gust, though the latest RAV’s more slippery shape means that the latter has been nicely reduced, too.

The thing with the RAV – as is the case with all Toyota’s and Lexi that use the manufacturer’s hybrid tech – is that I tend to have a hard time getting it to stay in EV mode, even though there’s a button present that allows for that. Thing is, the button only activates EV if there’s enough of a charge and you’re travelling at the proper speed; any faster than 40 km/h or so, and the system yells at you – pretty much literally, what with the beeps and messages it flings at you as soon as you flip that switch. 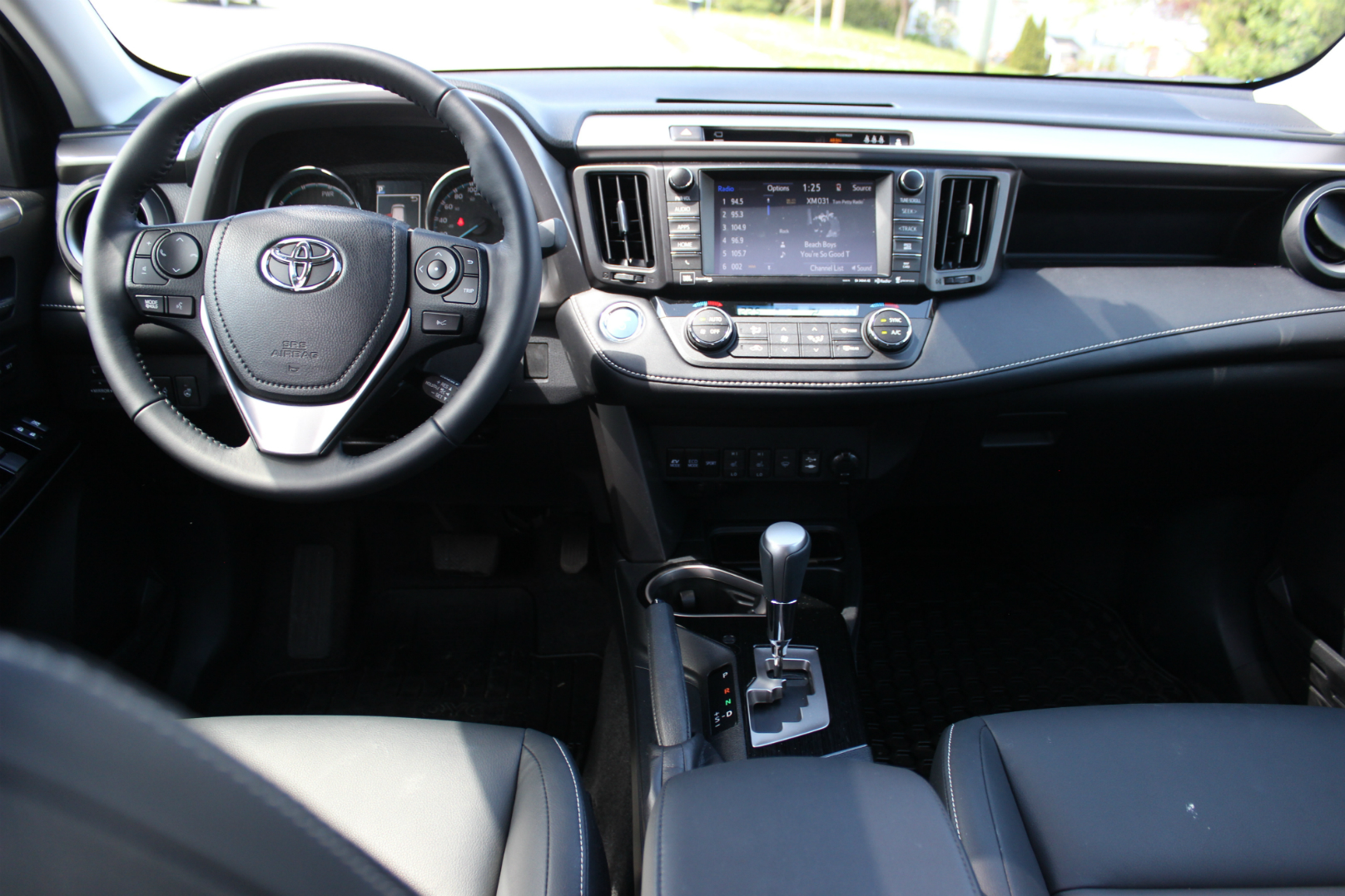 LE: Driving this RAV4 lets you feel good about helping the environment, save money on fuel and allows you to relax and not worry about the safety of the contents or passengers. Toyota Safety Sense is standard on all models. This includes Dynamic Radar Cruise Control, Lane Departure Alert with Steering Assist, Pre-Collision System with Pedestrian Detection, automatic high beams and more. All of these systems communicate with each other to deliver a feeling of safety not found in any other vehicle in this class.

Dual Zone Automatic Climate Control, rain-sensing wipers, Bluetooth capability and heated front seats are just a few of the comfort features that are available on this RAV4.

The Hybrid Limited that I am driving this week gives you a power moon roof, SIRI Eyes free, front and rear parking sonar and more! It gives you everything you could ever want in a vehicle like this for just under $42,000.

DH: The fact that there are three trims of the RAV4 Hybrid is news in and of itself; that means that while the tech Lacey mentioned in our Limited is great to have, you get access to plenty of good stuff even at more basic levels. 6.1” touchscreen, push button start and heated front seats are all here at base, which will be a very enticing option for those that want to get into a practical hybrid without such a big hit to the wallet.

I am looking forward, however, to what the new Camry has in store for us when it comes to the infotainment system; Toyota’s debuting an all-new system there, and judging by what the RAV4 has, they need it. The graphics are dull, the interface is clunky and there’s no support for Apple CarPlay or Android Auto, something that is becoming increasingly important on the car landscape these days. Problem is, it looks like the new system’s not going to have support for those third party apps, either. Shame.

LE: Sales for Toyota Canada were up for the month of May 2017 thanks mostly to the help of this Canadian made RAV4. Super-efficient and comfortable with innovative technology that keeps you safe and saves you money at the pump. And I almost forget that it won the Canadian Green Utility Vehicle of the Year by the Automobile Journalists Associate of Canada! Though I still think a soft top would be fun addition, you really can’t ask for anything else.

DH: While the latest RAV4 may still not be winning any styling prizes, it’s a very well-implemented step up on what we’ve seen before. Take a look through the rest of Toyota’s recent line-up, and you’ll see that they finally seem to have their styling ducks in a row, and are starting to have some fun with their designs. The 2017 RAV4 has been the beneficiary for this, and I’m not sure, but I’m willing to bet my colleagues and I are going to have to start thinking twice before calling it “vanilla”. 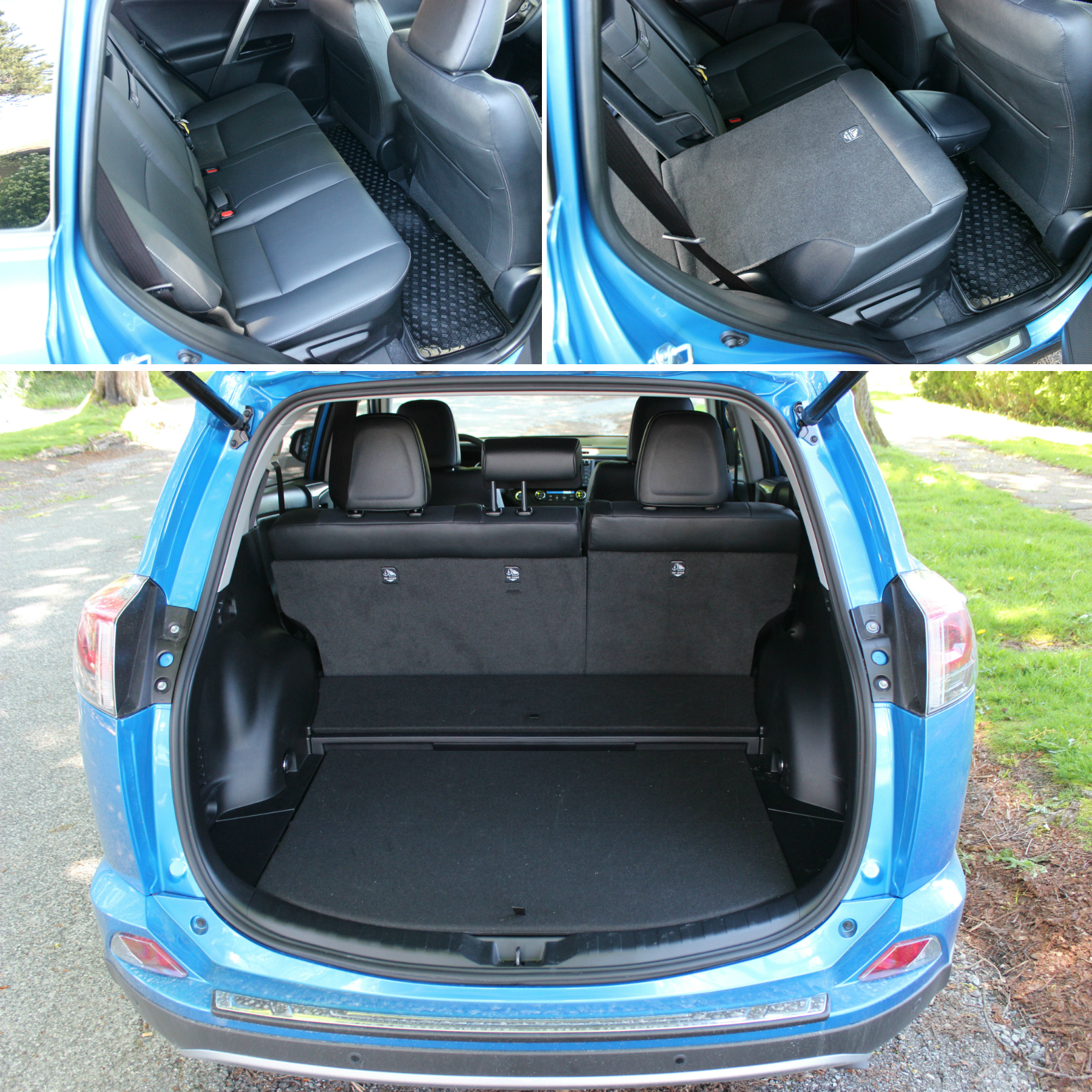