Cute ride is easy to park and great to get in and out of tight spots.

MIAMI, FLA. – As I have said many times, there’s no way battery-powered cars are ever going to gain more than a small fraction of our car market, certainly not for the foreseeable future.

What share they are going to acquire is probably going to be with cars like the Smart electric, a tiny city-oriented car from Mercedes-Benz whose owners are not likely going to want to drive a whole lot farther than it can go on a single charge.

Which, depending on things like ambient temperature, is up to 160 kilometres. Winnipeggers in February, not so much …

The Smart ‘fortwo’ coupe Electric Drive arrives this summer. There will also be a Smart Electric Drive cabriolet, the first battery-powered drop-top of which I or Mercedes-Benz are aware.

Pricing has not been announced. The previous generation listed at $26,990 for the coupe and $29,990 for the cabrio, so that’s probably ballpark, less, of course, the bribes that B.C., Ontario and Quebec taxpayers will give you for purchasing an electric vehicle.

There will also be a ‘forfour’ (four-door, four-seat) version available in other markets, but not in North America.

Even dedicated electric car fans, nevermind ‘electro-agnostics’ who might be susceptible to conversion, need to know important stuff like range and recharge times.

Smart brags that the new model can recharge twice as fast as the previous generation, which is to say in as little as 2.5 hours, if you have a three-phase 220-volt charging system available to you — more like 13 hours if all you have is a normal 110-volt household circuit. So, progress, which is all well and good.

But that also means that instead of taking 60 to 300 times as long to refuel as a gasoline car, depending on the recharge capability available to you, it only takes 30 to 150 times as long. Well, yay.

True, the electric can be ‘re-fuelled’ while you sleep and the process controlled by your, um, ‘smart’ phone, which so far gasoline-powered cars cannot accomplish. Then again, they hardly need to.

Smart also fudges a bit with these range and charge time numbers. The quoted times only bring the battery to a maximum of 80 per cent of its capacity, so your peak range after 2.5 (or 13) hours would be under 130 klicks. Winnipeggers in February again, not so much … 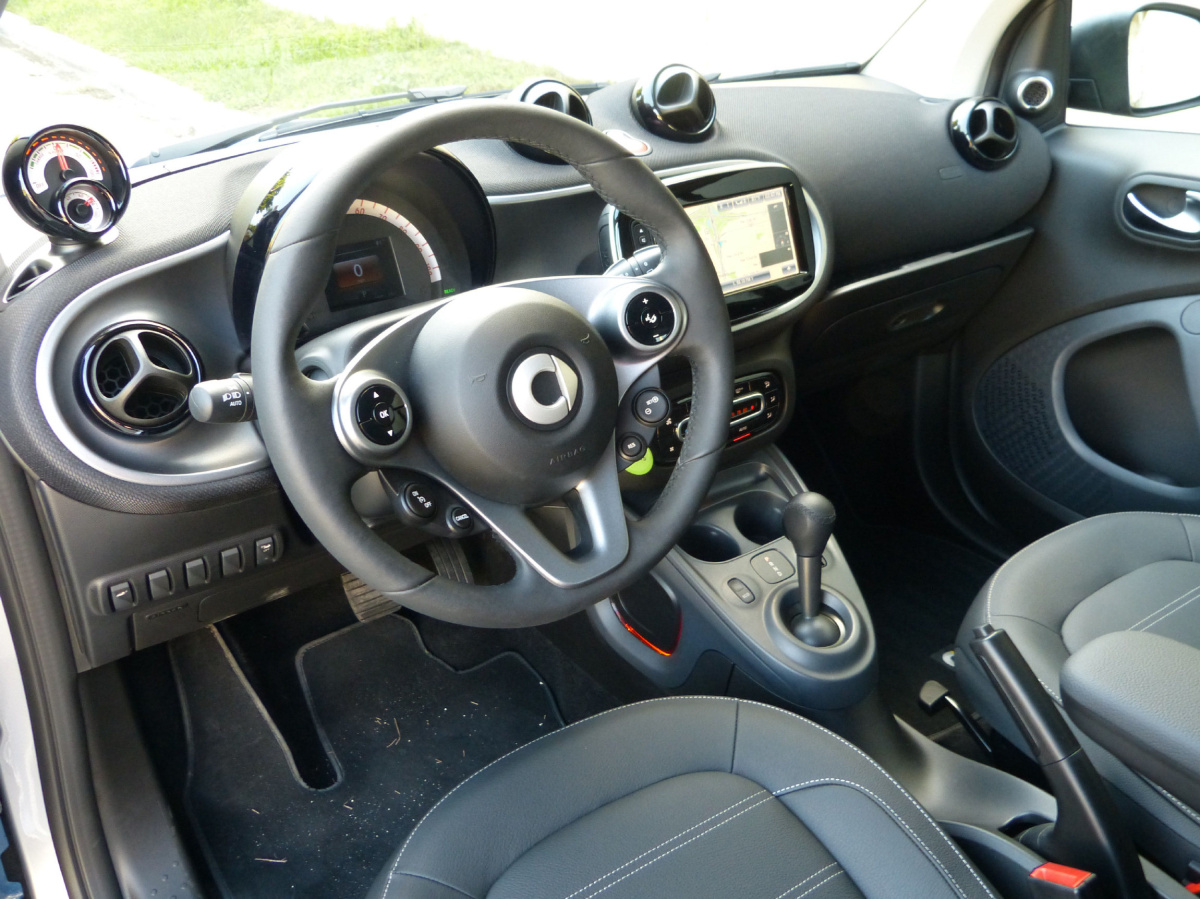 A 22-kilowatt fast-charger system which can complete the charging in 45 minutes (only nine times as long as a gasoline car …) will be offered as an option, but at this point, it’s not clear whether it will be available on this side of the Atlantic.

If you can live with these limitations — and if you can’t, you’d have stopped reading by now — what’s the Smart electric like to drive?

First, I should note that the Smart is the only vehicle which offers pure electric or gasoline versions (the Diesel option is gone, even in Europe).

The fuel engine is replaced by an 81 horsepower electric motor, and a 96-cell battery pack under the floor where the fuel tank would be is rated at 17.6 kilowatt-hours.

Battery chemistry? Lithium-ion. Yes, the same as the Samsung Galaxy Note 7 phone that no airline will let you take on board. Hm-mm …

But of all Smart variants, the electric is by far the most entertaining to drive.

That’s because the biggest drawback of the early-generation Smarts was the balky semi-automatic transmission.

That has been improved on newer models, but the electric has no transmission at all — it’s a direct-drive from motor to rear wheels, from rest to its maximum of 130 km/h.

Reverse? It simply reverses the rotation of the motor. Which, I guess, means that theoretically, you could go 130 km/h backwards, too. Not recommended …

Because electric motors develop peak torque at 0 r.p.m., launch is very brisk — 0-60 km/h comes up in just 4.9 seconds. No Porsche Turbo, but sprightly enough. A 0-100 km/h time might seem irrelevant for a city car, although you will likely have to negotiate urban freeways from time to time, and at 11.5 seconds, the Smart electric can keep up.

An ECO driving mode puts limits on that acceleration and top speed in return for longer range, and maximal regeneration braking when braking.

It also has the capability to ‘read’ the road ahead for stopped traffic, and adjust the car’s behaviour, again to maximize range.

You can also arrange for the car to heat or cool the interior while it is still plugged in, thereby reducing the load on the battery.

Turning circle is almost laugh-out-loud short, the car seemingly pivoting about its own axis when you fully crank it. You can practically hang a U-ee and never leave your lane; two lanes, absolutely tops. 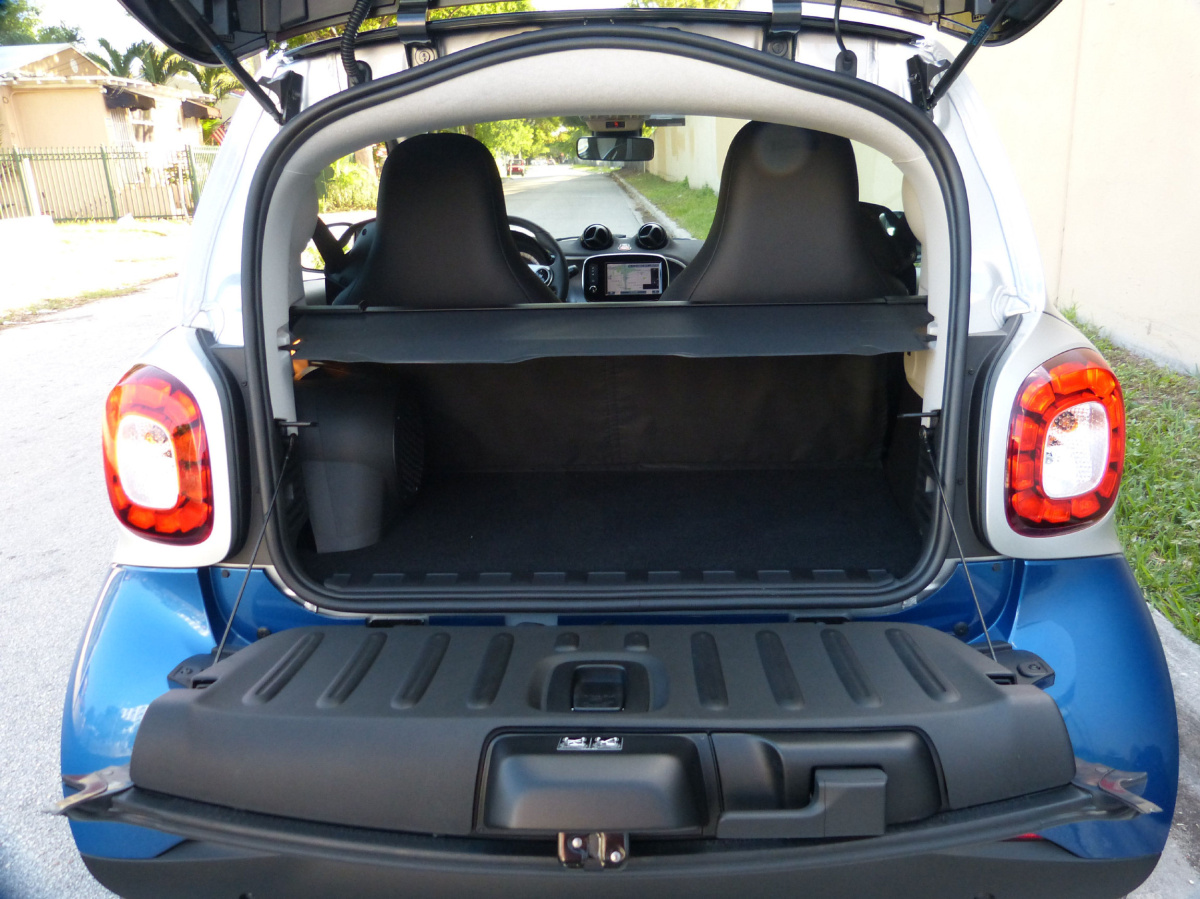 In most North American jurisdictions, it isn’t legal to park perpendicular to the curb. Not sure why, even if Smart is probably the only street-legal car that could do that. It would double our available parking spaces.

Still, the most fun to be had in a Smart is driving past a mirrored building, seeing yourself and your car in the reflection and thinking — “Geez, I’m driving in THAT??”

No real worries about crash protection, despite its size, because the car scores very well crash testing, thanks in large part to the ‘Tridion’ structure, made by a subsidiary of Canada’s own Magna corporation.

Once inside, it feels remarkably spacious, if a bit narrow for two. At least with no gear lever to massage, you won’t be banging elbows with your passenger.

There’s room for a couple of small duffel bags behind the seats, but you will be travelling light. The decor in our blue tester wasn’t as gee-whiz funky as Smarts used to be. Some may mourn that; to me, it looks and feels just a bit more grown-up.

Added instruments do let you keep track of battery condition and range. The seats are generously sized and comfortable.

Ride is necessarily choppy due to the short wheelbase, but it’s fine around town where you’re going to be driving it. If you can avoid the volcano-sized potholes, that is.

It obviously is nearly silent, with just the faint hum from the motor whirring away behind you. A sound generator in the front kicks in at speeds under 30 km/h to warn pedestrians or others who might not sense your presence.

The theory behind an electric urban car assumes people living downtown only need a car with this limited capability.

But I thought the point of living downtown is that you don’t need a car at all, except for going away on weekends. Unless your idea of a weekend getaway is downtown Toronto to downtown Mississauga, the Smart probably isn’t going to cut it.

As part of a car-share program though, the Smart electric will play a role, which is why Mercedes-Benz is a major shareholder in the ‘car2go’ ride/car-sharing program.

Obviously, the market for a two-seat pure electric car is small, which is at least part of the reason there aren’t any others.

Nissan Leaf, Chevrolet Bolt and Mitsubishi I-MIEV are all four-doors, and usefully bigger, although perhaps not as funky or as ‘pure city’ as the Smart.

Still, if you’re in the market for a halfway affordable battery-powered car, you might as well put the Smart on your shopping list. 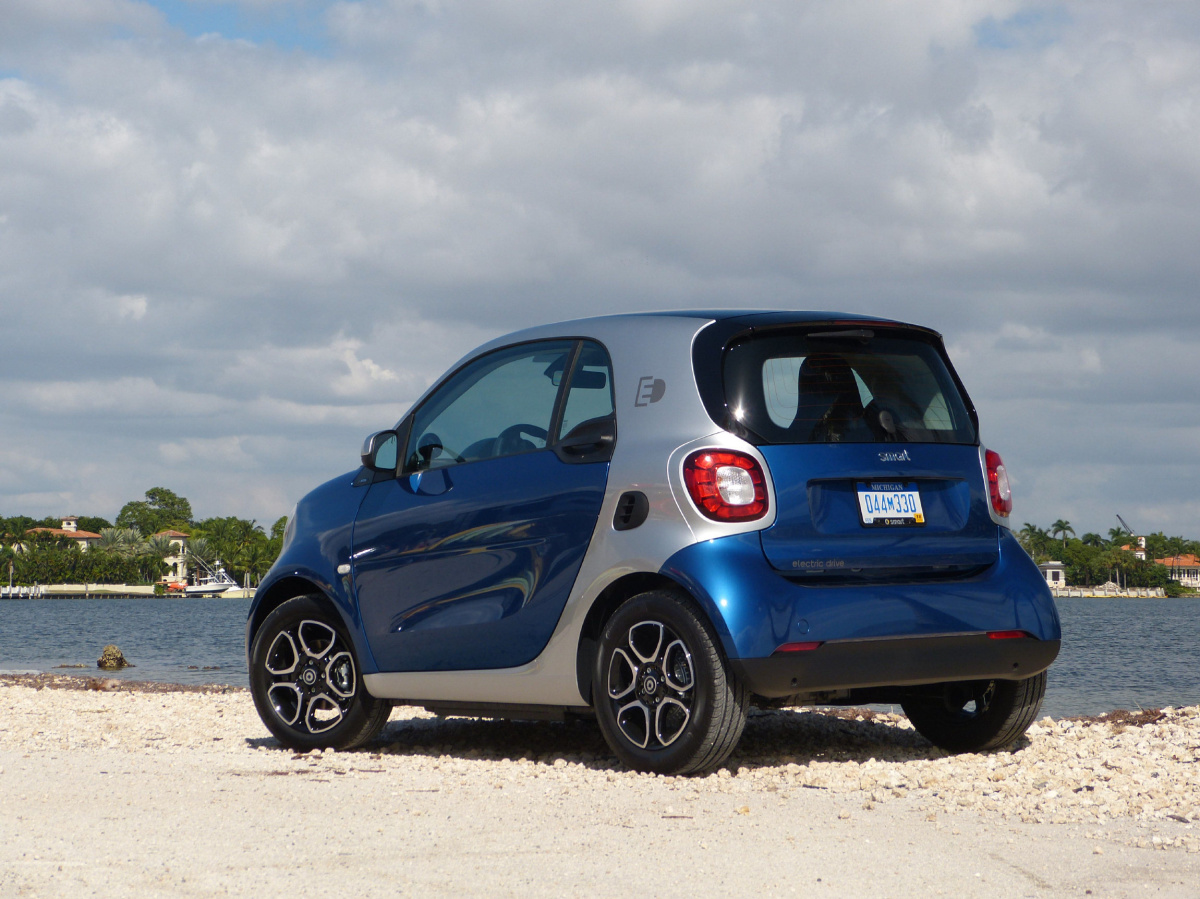