Compact sports sedan approaches the front of the segment in ride and handling.

DUNCAN, B.C. – The slogan for Lexus, Toyota’s upscale brand, is “The relentless pursuit of perfection.”

For the Lexus IS compact sports sedan, that might be modified to “The relentless pursuit of the BMW 3 Series.”

Over its 17-year existence, the IS may not have been quite an unabashed copy of the Bavarian bolide.

But since the Bimmer pretty much invented this segment and has dominated it ever since, how can you blame Lexus for taking a peek at what the main competitor has been doing?

The 2017 IS is effectively a facelift of the all-new, third-generation car which was launched in 2014.

The most obvious changes for the third-gen car were suspension and steering adopted from the mid-size GS, a much-needed 40-millimetre increase in rear seat legroom, and the much-less-needed addition of the now-iconic Lexus spindle grille.

Another reason why you should always back into your parking space, so you can approach your car from behind.

That said, the Lexus website says customers and prospects love the exterior styling. No accounting …

The 2017 starts at $42,590, which is about a grand more than last year’s entry-level model, a modest amount given the added equipment.

Note that the Lexus website says the ‘displayed’ prices (referenced throughout herein) include freight, PDI, air conditioning tax and ‘dealer fees,’ which may vary by dealership, but not whatever incentives may be on offer.

The changes for the 2017 IS are largely cosmetic, with LED headlights, larger air intakes flanking that grille, minor tweaks to the rear end, plus refinements inside with a new SatNav screen and control system in uplevel trims. Rain-sensing wipers are also now standard across the board.

But the most significant technical addition is the ‘Safety Sense Plus’ system, including adaptive cruise control, pre-collision emergency braking with pedestrian detection, lane-departure warning with steering assistance, and auto dipping for high beams. 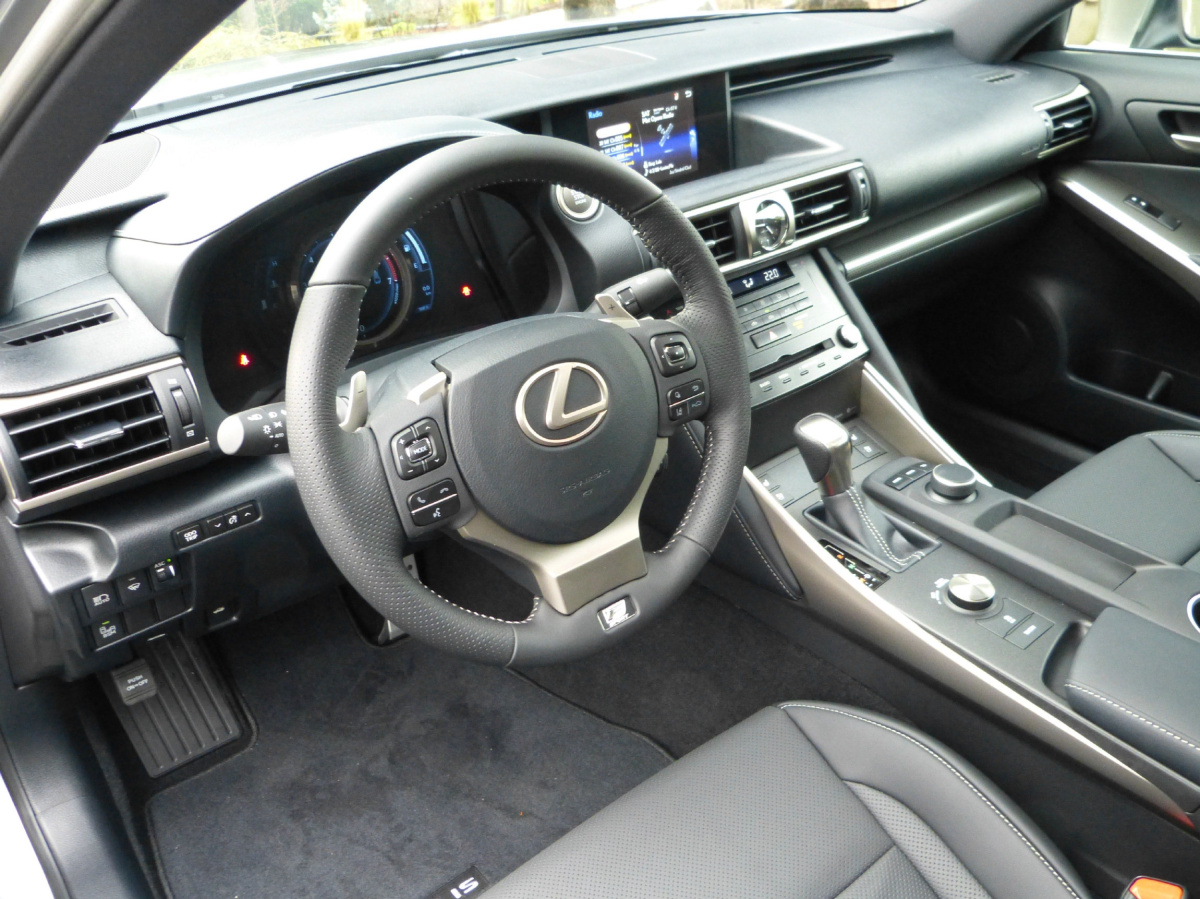 Much of this stuff is standard on Toyota’s Corolla, so how could Lexus not follow suit?

Three distinct models are on offer, with at least one of them not following the mostly German competition’s lead in having the model designations mean nothing.

So the 200t as you might expect has a 2.0-litre turbo, an inline four cylinder producing 241 horsepower with torque maxing out at 258 pound-feet.

Interestingly, this engine’s variable valve timing allows it to operate under the so-called ‘Atkinson’ cycle, usually only found in hybrid cars. This delays the closing of the intake valves to reduce pumping losses and improve efficiency when you are driving gently.

It reverts to full Otto cycle when you lean on it, thereby getting full power. If you can sense the transition, you’re a more sensitive person than I am.

The 200t is a rear-drive car, equipped with an eight-speed, automatic transmission, there no longer being enough demand for a manual transmission.

Both are full-time, four-wheel drive only, and come with a six-speed auto-box.

Lexus’s sporty sub-brand is ‘F-Sport,’ and each model offers one or more optional F-Sport packages. These are largely cosmetic, too, although larger wheels and tires are included, as are sports seats which grip you tighter when you are exploring the outer edges of the performance envelope.

You’ll need to study the brochure and order form carefully to get exactly what you want. 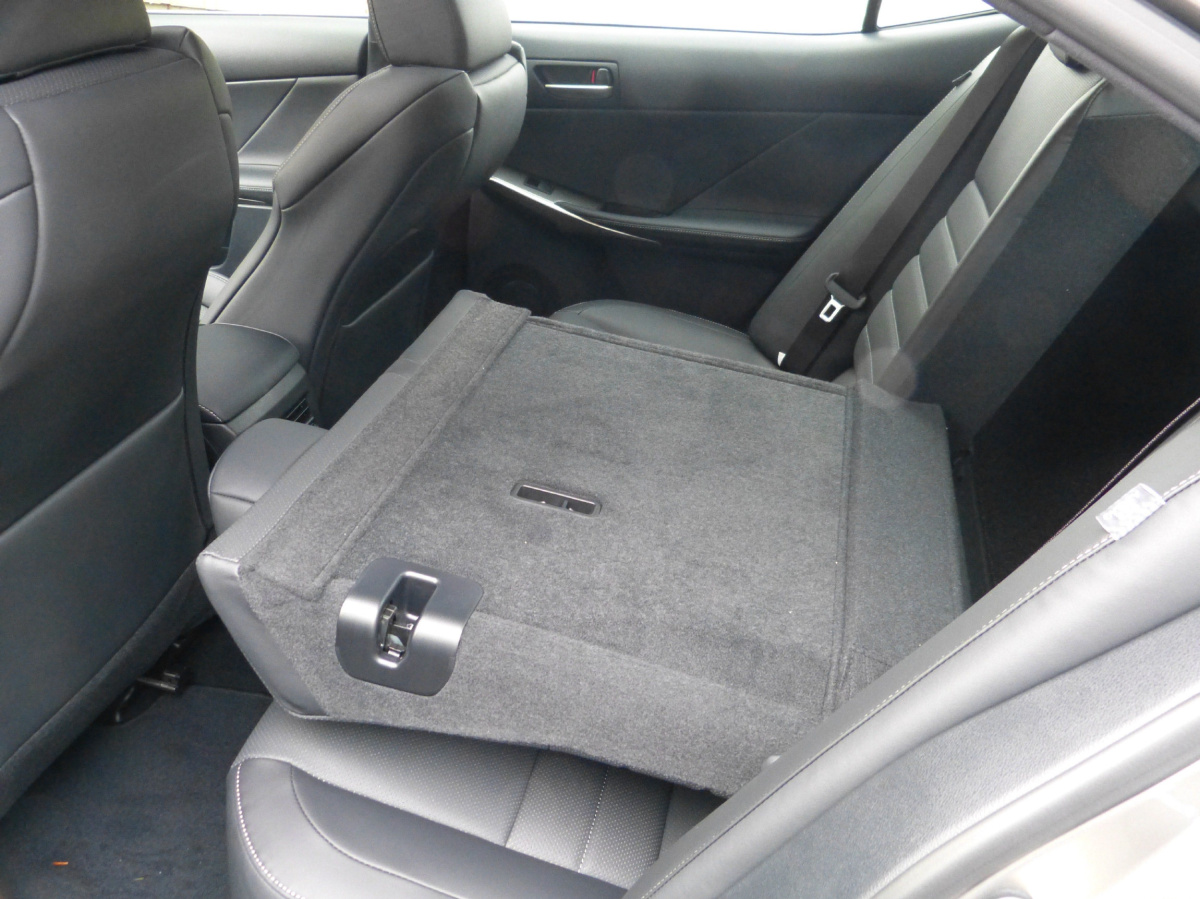 And how strange that SatNav is not available at any price on the 200t? I guess we all have our Garmins or maps app on our smart phones, but odd are the ways of the product planners.

Our preview test drive consisted of a nice winding — albeit damp — road run from the lovely Villa Eyrie Resort to the Vancouver Island Motorsport Circuit. This included an unintended delay waiting for the local towing crew to winch an old Chrysler Pacifica out of the woods. Geez; you’d think these B.C. people would be used to driving in the wet.

We managed to snag a 200t F-Sport for this stretch, and while it is the least powerful of the lot, it is without doubt the most fun to drive.

Power delivery is nice and linear, not always the case with turbo engines. The automatic shifts well by itself, but you can mess with the steering wheel paddles if you think you can do it better. You probably can’t.

Perhaps tamed by the sight of the mangled Pacifica and the knowledge we were heading to a race track, we didn’t push too hard on the car. Suffice it to say that the car rides well, and there’s a nice sporty rear-drive feel to the handling. The sports seats kept us snug in the twisties.

In addition to the few important lack-of-equipment details in this car, there seemed to be more plasticky bits than I would have expected in a car with a mid-forties sticker price.

Audi still rules the world in car interiors; Lexus — and frankly, everybody else — should copy.

At the track, we got to explore the other power- and drivetrains too, and our opinion didn’t really change much.

All models handled the technical 2.3-kilometre track with confidence. The track had dried by this time, so the four-wheel drive system in the V6 models didn’t get much chance to prove its worth, although for Canadian winters, it might still appeal.

The 300 actually has less torque than the 200t, and despite a more mellow exhaust note, didn’t seem to offer much for the admittedly modest additional price.

We also drove a 350 back to the hotel, and its whopping 10 grand hit in the pocketbook is even harder to justify.

The V6 models include what Lexus calls a ‘Remote Touch’ control system, using a mouselike control in the centre console to swap menus on the dash-mounted screen. As is nearly universal with these things, it is far too sensitive, and much too difficult to land on the spot you want, especially if you happen to hit even a small bump in the road as you are making your selection.

It’s not because I’m old that I can’t adapt to these things. It’s because they are simply wrong from an ergonomic, hence safety, perspective. But there seems to be no move toward logic here, in any new car, so we’ll just have to try to learn to live with them until maybe someone actually figures out how to make voice control work.

In sum, the Lexus IS ups its game in one of the toughest segments in the industry, with the Audi A4, Jaguar XE and Mercedes-Benz C Class vying for your attention.

The IS approaches the front of the field in ride and handling. To me, the Cadillac ATS or Jaguar XE probably win overall here, partly because BMW’s embrace of run-flat tires indicates they don’t care about ride quality anymore.

When you dial in Lexus’s well-deserved reputation for quality, reliability and customer satisfaction, you might be able to forgive it some of its equipment and trim level ambience deficiencies.