PITLOCHRY, SCOTLAND – Bill Baker, the former PR guy for Land Rover North America, always said that you can’t win when you lay out a press test course for an off-road vehicle.

“If the car can’t handle it, the car’s no good,” Baker said. “But if the car can do it, the course wasn’t tough enough!”

The trick is to devise a course that the car can just barely handle. And if one or two journalists get stuck, well that’s their fault, not the car’s.

You may also like: Jaguar Land Rover’s Chief Design Officer says the next big challenge the industry faces is self-driving vehicles.

The new Discovery, which drops the LR4 designation used in North America on the previous model, goes on sale in Canada in mid-2017, starting at $61,500.

Styling-wise, the new car retains some of the cues from the previous models such as the stepped roofline, but in a modern, sophisticated way. 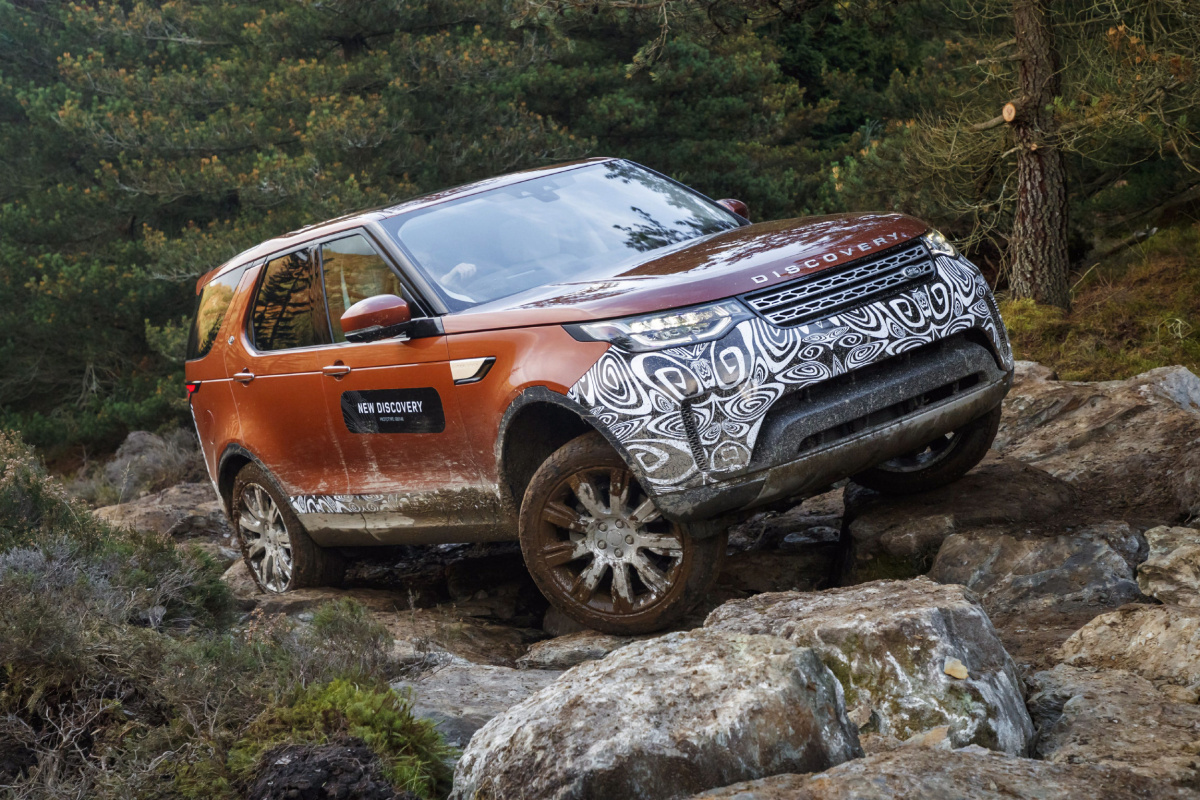 Perhaps the most impressive demonstration of the 2017 Land Rover Discovery prototype was on an uphill stretch of massive rocks that were very wet. Jim Kenzie says the vehicle passed the test.

Structurally, it is based on the aluminum-intensive Range Rover architecture, which lops some 480 kilograms off the car.

Independent suspension front and rear can be fitted with steel or air springs, depending on your budget and how cushy you want your off-roading to be.

We will get two 3.0-litre, V6 engines, a supercharged ‘petrol’ (gasoline) with 340 horsepower, or a turbocharged Diesel with 254.

This allows you to choose what sort of terrain you will need to respond to, and the car figures out the right suspension, throttle, transmission, braking and traction management settings to suit.

If that’s too difficult for you, set it to ‘AUTO’ and the car will figure it all out for itself.

Land Rover invented Hill Descent Control, whereby in steep downhill situations, you can set the car to maintain a set speed which it does by selective individual wheel-brake application for a gentle, safe descent.

Now they also have All-Terrain Progress Control, sort-of Hill Ascent Control. Set the system up, choose a speed, push a button, and if there’s sufficient traction, the car would climb a tree. All you have to do is steer.

Speaking of steering, Land Rover has a self-steering function that actually might be useful. Discovery owners tend to tow with their vehicles a lot, and reversing to line up a hitch with a trailer can be tricky. Advance Tow Assist can handle this for you. Max towing capacity is 3,500 kg. 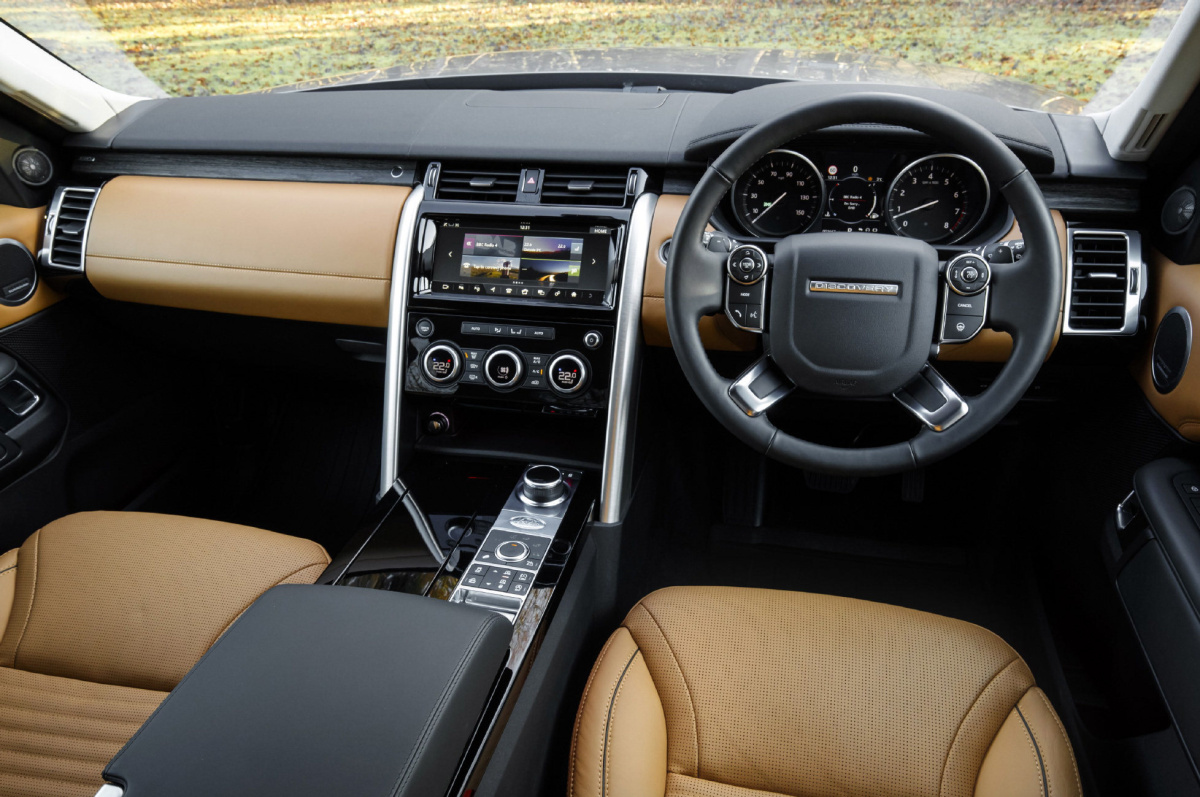 Yes, the 2017 Land Rover Discovery prototype’s steering wheel is on the right side, as the vehicle was tested in Scotland.

If the original Land Rover was a small step up from a farm tractor, the new Disco prides itself on being the most ‘connected’ Land Rover yet. Apple Car Play and Android Auto are both supported, and up to six 12-volt charging points and seven USB outlets allow every member of the family to plug in whatever they’ve brought on the journey.

On-board Wi-Fi is also on offer, although it is only 3G, not the newer 4G.

The optional 10-inch touchscreen is similar to those used in Range Rover and the newer Jaguars. They have promised me that the ridiculous inability to lock the SatNav map in the ‘North Up’ mode will be corrected by the time the Disco hits our shores. You can select it, but after about a minute, it reverts to ‘direction-of-travel-up.’

I prefer north-up, because maps have been north-up ever since Neanderthals started scrawling on cave walls. It’s especially important when you don’t have guidance operational and just want to know where you are.

But whichever system you prefer, you should be able to choose it and keep it.

The standard interior is a five-seater, but a three-row, seven-seat package is optional. It’s a true seven-seater, too; ‘stadium-style’ seating with the rear rows successively higher off the floor improves visibility for their occupants, and the stepped roofline provides headroom for everyone, too. I sat in that third row and it was fine.

With the seven-seat setup, you can remotely power-fold the seats in whatever configuration you want before you even get to the car.

There’s something like 2,500 litres of storage space in there. I bet you’ll own the car for six months before you find all the hidden cubby bins. Hint — there’s one behind the HVAC control panel.

The horizontally split tailgate of previous generations is gone, but recalled in a panel which is hinged at the bottom and remains upright when you open the tailgate, acting as a load restraint. Fold it down, and you’re ready for that tailgate party.

(Do they have tailgate parties at cricket matches?)

Interior appointments have been markedly upgraded from the LR4. Higher-quality materials and better fit and finish make this car feel more like it’s worth the money.

Both engines were made available when Land Rover came up with a somewhat more challenging venue than a LEGO bridge for our first shot at the new car — the Blair Atholl Estate near this town in central Scotland.

This massive property has a network of trails wandering all over the place, probably originally carved out by cows proving the adage I just made up that the heather always tastes sweeter on the other side of the glen. 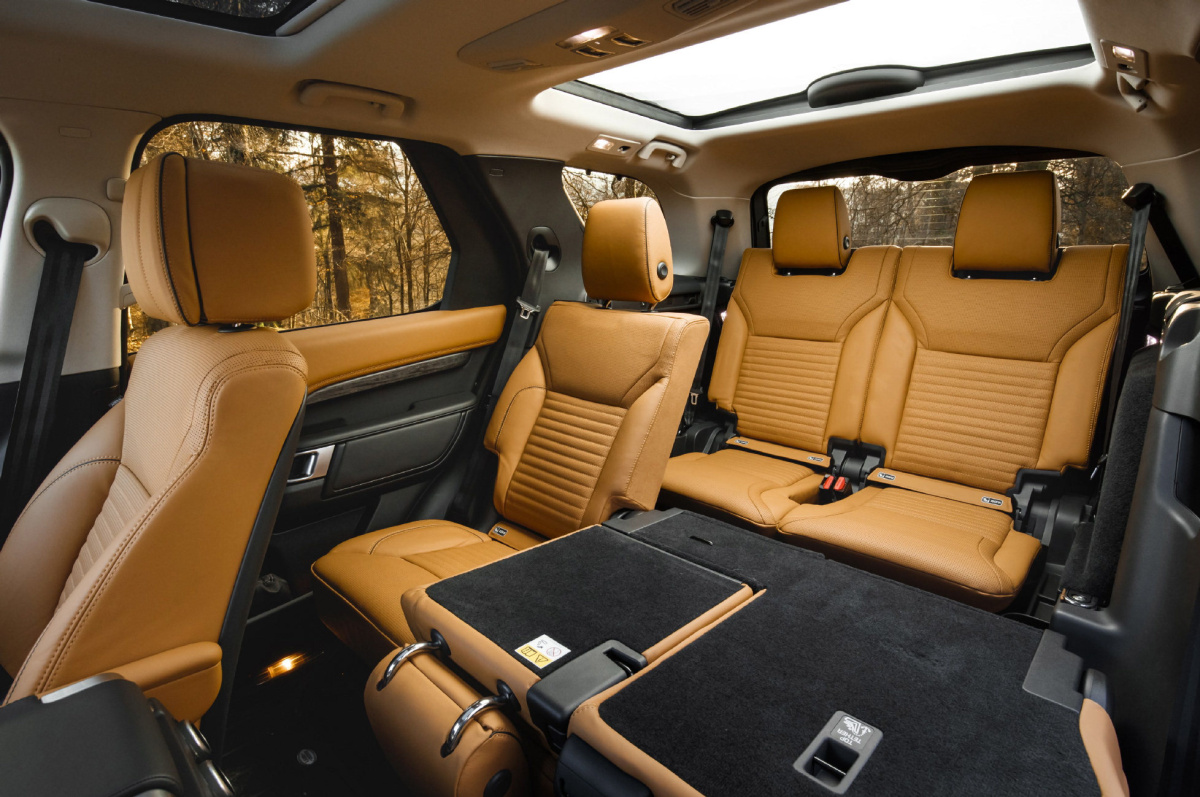 The standard interior in the 2017 Land Rover Discovery is a five-seater, but a three-row, seven-seat package is optional.

We started with the Diesel, and finished with the gasoline. For me, the Diesel is the choice. The massive torque is perfect for mud-plugging, and on-road, the fuel economy is remarkable. Your 0-100 km/h sprint time will be slower, but 8.1 seconds versus 7.1 isn’t a huge gap.

And by Diesel standards, the Disco’s is very quiet.

Technically, the vehicles we drove were prototypes, unlicensed for public roads and decorated with minimal curlicue camouflage decals.

They were equipped with all-season (a.k.a. no-season) tires, like the ones that will be standard on our cars, so Land Rover was doing their new Disco no favours in this regard.

If you haven’t taken something like a Land Rover out on a course like this, you simply would not credit that a vehicle could actually traverse the sorts of terrain this thing can handle.

Steep ascents? Impressive, especially when you set the All-Terrain Progress Control system to do all the hard work.

Steep descents? These are much scarier, because you effectively put your life in the metaphorical hands of the car. You crest the hill, you can’t see over the hood to where you’re heading, you nudge the car past the point of no return, and hope the systems work. They do.

In case you fear we were doing this blind, Land Rover had driving coaches at each critical point, telling us which way to go.

Perhaps the most impressive demonstration was on an uphill stretch of massive rocks that were very wet, thanks to the rain and the fact that all the vehicles had just crossed a raging stream. 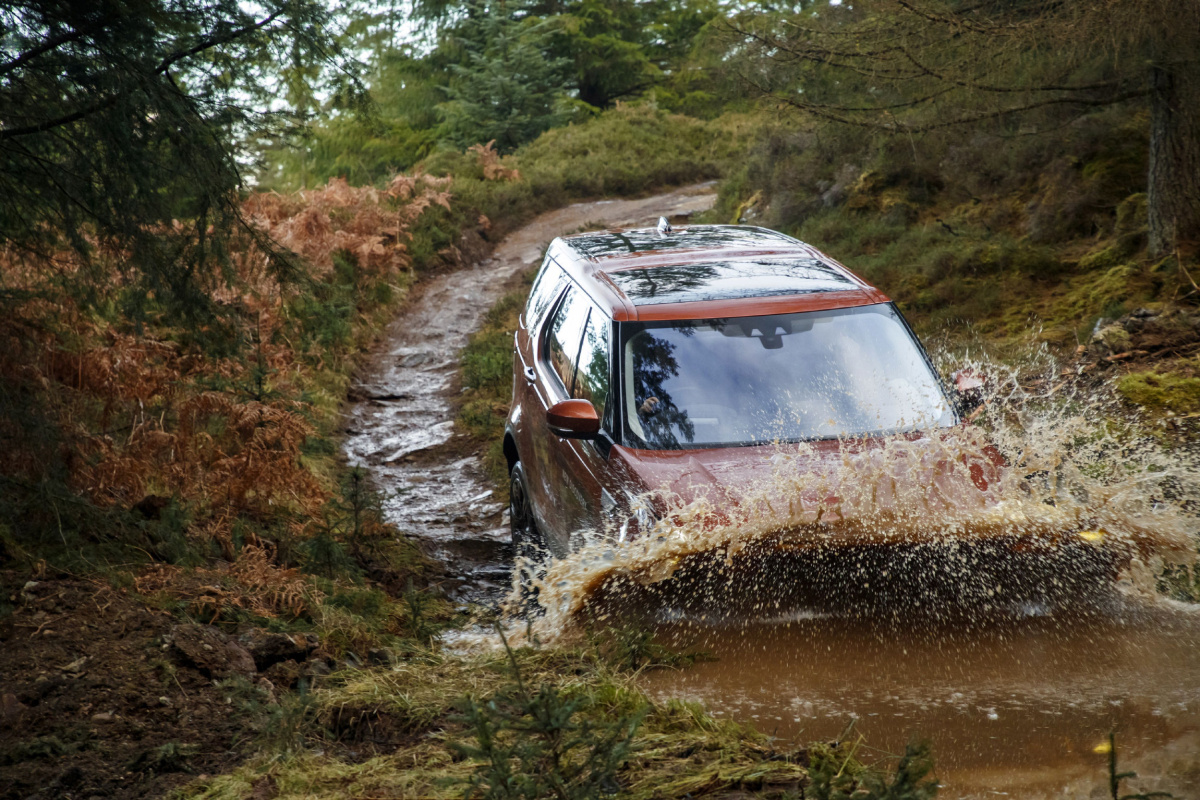 Jim Kenzie says the steep descents he took in the 2017 Land Rover Discovery prototype were scary, because you put your life in the hands of the car, and hope the systems work. They do.

Again, given the tires, the fact that it could pass this test was a true testament to the capability of this vehicle.

Professional courtesy — I won’t tell you which journalists got stuck.

Now, is the typical owner of a vehicle that can cost well over 80 grand going to subject it to this sort of treatment?

Probably not, although Discovery owners are generally more adventurous than most SUV buyers.

But just like Porsche 911 Turbo owners are unlikely to ever take their cars on the Nurburgring, they like to know they could.

Likewise, Disco owners might do nothing more difficult than tow their horse trailers across a muddy field. But they know for sure it won’t let them down.

You may also like: Driving way off-road at the Canadian Land Rover Experience

The Indian conglomerate Tata which acquired Land Rover and Jaguar in 2008 has invested a ton of cash in new and revised production facilities.

Jaguar’s scores have risen rapidly, while Land Rover’s have yet to react as dramatically. Given that vehicles from both brands are assembled in the same plants by the same people and use many of the same components, you’d assume that this is just a matter of time.

Meanwhile, rest assured that the designers and engineers have done their jobs with the new Discovery. Only time — and customers — will tell if the assembly people can keep up. 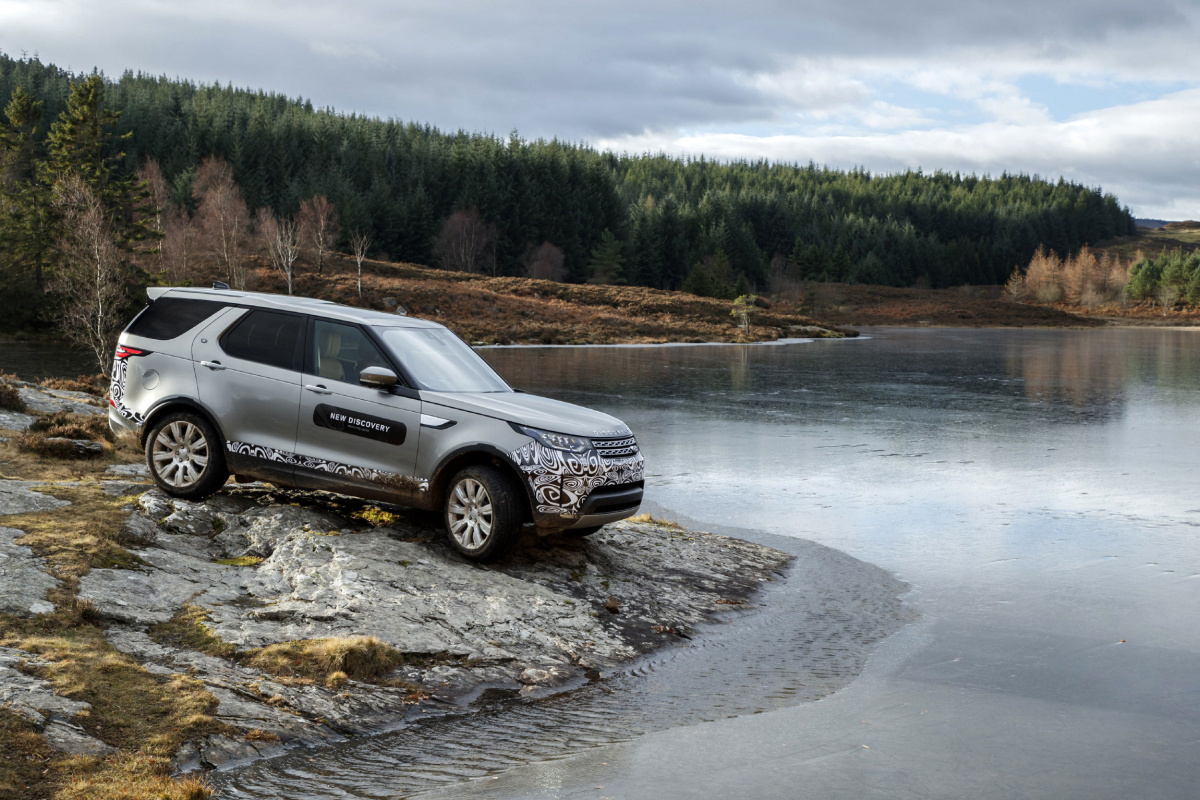