Subaru’s 2016 crossover has dropped the unnecessary XV before its name. It’s one of the bigger changes for the newly minted 2016 Subaru Crosstrek—and that’s not a bad thing.

You can just call it Crosstrek.

Subaru’s 2016 crossover has dropped the unnecessary XV before its name. It’s one of the bigger changes for the newly minted 2016 Subaru Crosstrek—and that’s not a bad thing.

It might feel like a bit too much, especially considering such competitors as the Honda HR-­V and the Mazda CX-­3—the 2016 Canadian Utility Vehicle of the Year—start around $20,000. But, quickly add in the fact the Crosstrek comes with standard AWD, greater ground clearance, and a touch more power the price tag becomes much more justifiable.

Aside from the name change, the biggest additions to the 2016 Subaru Crosstrek is the standard 17­-inch alloy wheels, orange accent stitching on either the cloth or leather seats and SiriusXM on the Limited trim. Not too much to get excited about.

Thankfully for Subaru, they were working with a pretty good vehicle to begin with, which allows them to do a quick mid­generation cleanup and walk away without any major complaints.

Nothing changes under the hood. The same 2.0L, four­-cylinder engine capable of 148 hp and 145 lb-­ft carries forward. It’s mated to either a five­-speed manual transmission or a CVT, which my tester came with.

Power is a little underwhelming. It gets you around fine, but doesn’t breed any excitement. That said, the steering is nice and tight, and anything lacking in power is made up with exceptional fuel economy numbers. Over my week I averaged 8.7 L/100km with a pretty even split between city and highway driving. Quite impressive.

And, despite it looking a bit bulky, it was actually easy to maneuver in the city, fitting into spaces that I didn’t think it could get into. A big feat for a vehicle that’s targeted at urbanites who enjoy hitting the road on the weekends.

Speaking of underwhelming, this winter has been exactly that, meaning I didn’t have a chance to test the Crosstrek in traditional Canadian winter weather. With its extra ground clearance—220mm compared to the Honda HR­V’s 170mm—I was hoping to take it through some snow ­packed areas. That clearly didn’t happen, but I have to trust it would have been able to handle it.

Inside it offers just enough space for any couple with a youngster or two. It also works well for empty nesters, like parents who have been eyeing the Crosstrek for their next vehicle, who could use a decent amount of cargo space but don’t need a bigger crossover or SUV. 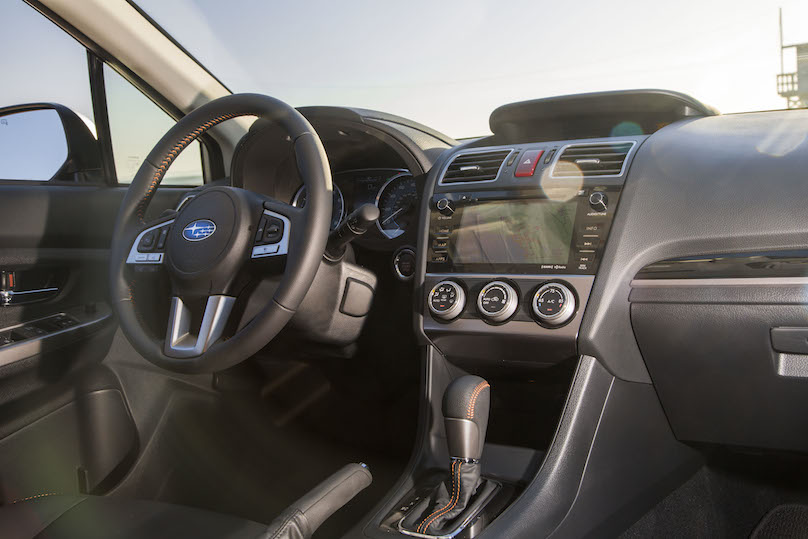 It’s a nice package that works quite well. I would get it for the adaptive cruise control alone—nothing like having the car do some of the speed adjustments over long stretches of highway driving.

My biggest issue with the 2016 Subaru Crosstrek is with its voice commands. They. Did. Not. Work. I paired my smartphone to the system; a great way to remain hands­-free on the road. Then I tried to call my wife. I hit the voice button and said, “Call Jenna Persaud.” It did not respond. Fine. I figured it wasn’t as advanced as other systems where you can just tell it what to do. I tried, “Phone,” thinking it would take me to a sub­menu. Again, nothing.

I showed my friend who owns a Forester and he just shook his head and laughed. I gave up.

RELATED: Top 10 Subaru’s of all time

Aside from that gaff, however, the 2016 Subaru Crosstrek checks off most of the boxes you want in this segment: good cargo space, adequate power, versatility and standard features that the competition doesn’t offer.

2016 Subaru Crosstrek at a glance: