NEW HAVEN, CT: The 2016 John Cooper Works is quite simply the most powerful, most competent MINI ever built.

It is based on the new MINI 3 Door, but boasts major enhancements throughout, starting with a 2.0-litre inline, four-cylinder engine with BMW TwinPower turbo technology resulting in 228 hp and 236 lb/ft of torque.

That’s a 25 per cent improvement over the outgoing model.

Canadian fuel consumption numbers were still being calculated at this writing.

With the manual, there is automatic rev matching that makes for smoother, faster shifts. The automatic can be shifted normally or with paddles on the steering wheel.

Along with its already low centre of gravity, there was a complete retuning of the suspension including aluminum and high-strength steel to keep the weight down — all augmenting the sharp handling on the JCW.

In fact, the new JCW weighs about the same as the outgoing model.

You might think that in designing the all-new JCW that MINI would start with the engine, but not so. 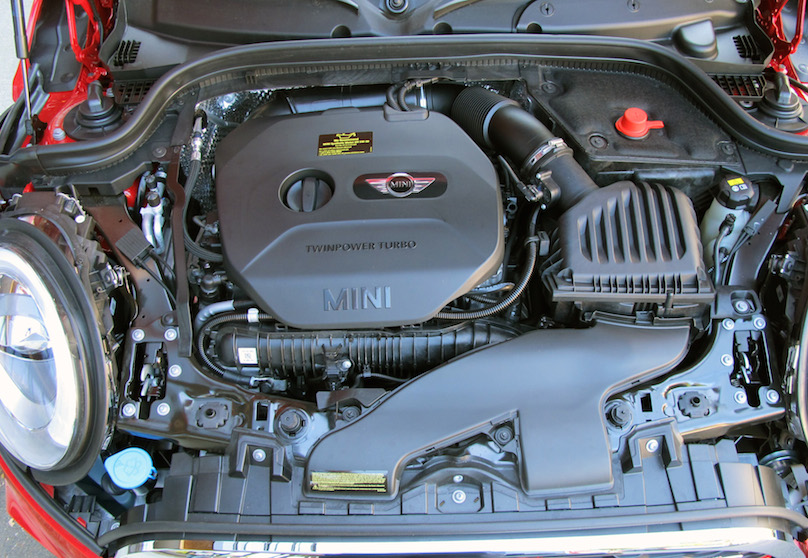 The first order of business was the brakes, with Brembo supplying JCW-specific 330 mm rotors up front with four-piston fixed calipers for outstanding stopping power.

In real life they are massive, fully filling out the standard 17-inch alloy wheels and even the optional 18-inchers.

Second on the list was the exhaust system which was designed to scavenge spent gases but also tuned for a rich tone which can be enjoyed with the automatic rev matching for a nice, little burble. 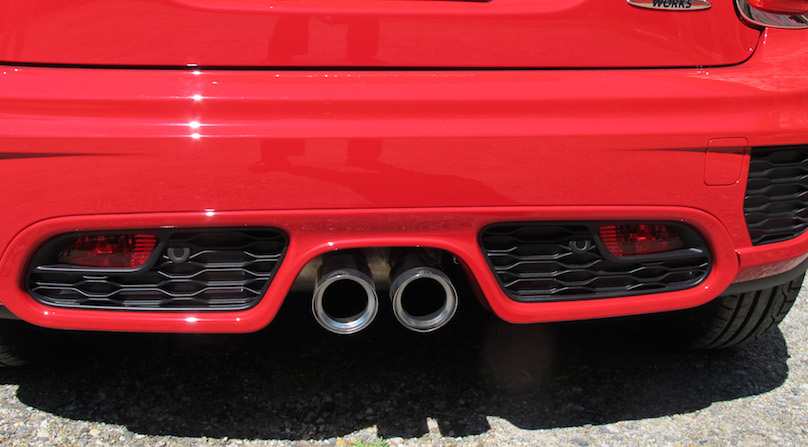 Optional is Variable Damper Control that changes the level of oil used in the shocks to reduce body roll and directional stability.

You would not think that what is essentially a box with four wheels could be aerodynamic, but the JCW will surprise you.

If you look directly at the nose, the whole thing is rounded for the smoothest possible airflow. On the lower sill, the driver-side outside air intake is functional, but the passenger-side intake is covered to route air around the fenders.

At the top of each wheel well surround there is a little protruding lip that deflects air up and back, not into the wheel arch, thus creating drag.

The rear apron with flaps and diffuser quells drag, while the spoiler up top reduces rear lift by 30 per cent — which is a lot.

Inside, the piano black with red accent interior boasts all-new JCW sport buckets with everything focused on new JCW-exclusive instruments including a dark dial speedo that is easier to see. 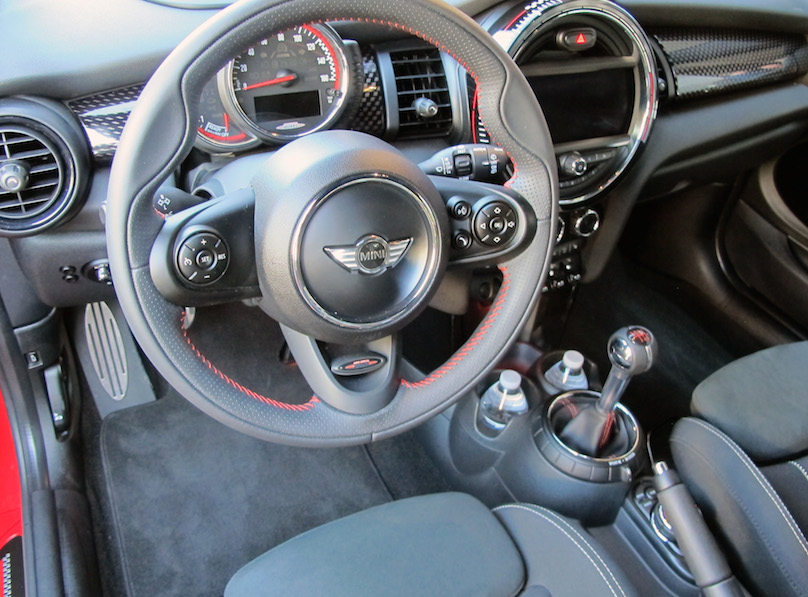 A now integral part of the MINI handling syllabus is MINI Driving Modes selected by a rotary switch aft of the shifter.

The modes are Sport, Mid and Green, each of which describes the response the driver can choose from the engine/transmission.

In the real world, you can feel a big difference especially at highway speeds, where there is a noticeable sensation of more power available, particularly when switching from Green.

The standard sports suspension (regular available as a option), the wide stance, short wheelbase and low centre of gravity results in a car that sits “four square” with the nexus of the wheels crossing between the front seats.

This really lets the driver know where the wheels are, so he/she can get on with the job of enjoying all the JCW has to offer.

During the press launch in and around New Haven, CT, part of the exercise was a truly tight autocross with cones snaking around a parking lot with a lane not much wider than the JCW itself.

I never got close to uncorking all the handling prowess of the car, but I know, from decades of experience, the JCW is just about as good as it gets in the technical driving department. 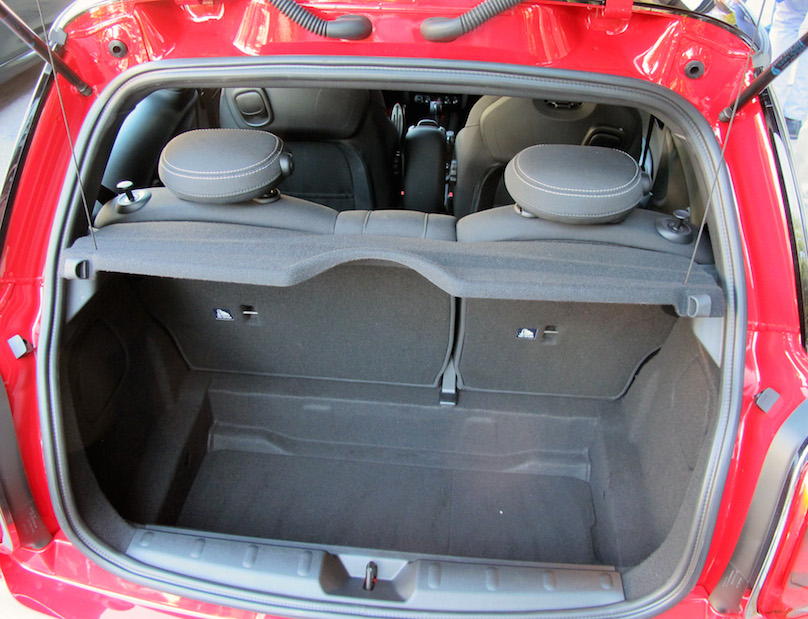 I drove the manual most of the time because I just love the way MINI clutches are so light, yet positive in the way the driver can modulate pedal take-up.

But the numbers all say the Steptronic is quicker and it felt like it, too, with a sweet growl from the engine with the gas to the stops.

Pricing for the 2016 MINI JCW Hatchback (it’s called the Hardtop in the States) starts for $33,240, but after that, the list of extras and options is extensive.

People think of the MINI as a great little urban car and it’s true, the JCW is a much different creature all together.

Yes, it’s good around town; but when you really want to go out and revel in its performance side, the MINI John Cooper Works is simply great. 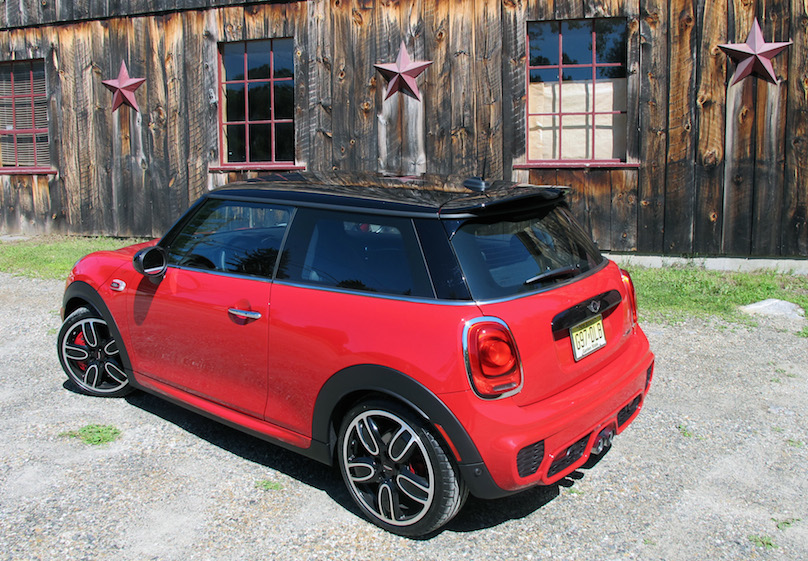 An Aston Martin DBS meets one of California's mos