Besides great mileage and good performance, you also get great looks in the Mazda 6. It is the best full production example of Mazda’s KODO design language.

What’s Best: Fuel consumption that comes close to hybrids, but without all the added weight of batteries and complexity.
What’s Worst: Dramatic KODO styling makes for a limited rear view, but this is mostly negated with blind spot monitoring.
What’s Interesting: The only production car to use a capacitor to store electricity without taxing the battery.

Two years ago at Easter, I asked on these pages if Mazda’s Skyactiv fuel-saving technology was “for real or just clever marketing?”

I had a 2014 mid-size Mazda 6 sedan in GS trim with the full suite of Skyactiv engineering and on that weekend I registered a combined 6.4L/100 km or 44 mpg after covering 541 km at just under half of the 62-litre gas tank.

But back then, Natural Resources Canada was still using the two-cycle fuel consumption test leading to highly optimistic outcomes. As a matter of fact, the numbers then were 8.1/5.3L/100 km city/highway for the six-speed manual and 7.6/5.1L/100 km for the six-speed automatic.

The new five-cycle NRCan ratings for the 2016 Mazda 6 are far more realistic at 9.4/6.4L/00 km city/highway for the six-speed manual; 8.8/6.1L/100 km for the six-speed automatic and 8.5/5.9L/100 km for the automatic with its i-ELOOP energy-storing capacitor (more on this further down). This year on a Mazda 6 GT automatic with i-ELOOP I drove more than 800 km and ended up with an average 6.5L/100 km over a mix of about 30 per cent urban and 70 per cent highway driving. That’s roughly 43 mpg, which dovetails with the reading two years ago of 44 mpg proving Skyactiv is consistently providing what Skyactiv is supposed to do. At one point this year on a flat stretch of Highway 401 on the less frenetic part west of Kitchener I was seeing 5.2/5.7L/100 km on the instant readout. 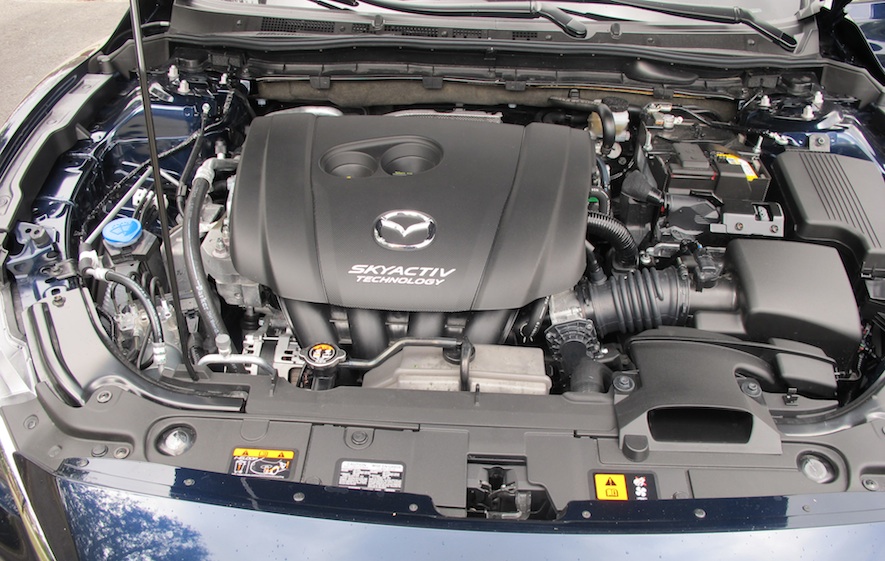 Just to briefly re-cap, Skyactiv is the name Mazda uses for a suite of engineering solutions to get better mileage without relying on hybrid/electric technology. With the automotive world gravitating to electrification, Mazda is alone in betting everything on the internal combustion engine. Don’t forget it was Mazda that persevered with the rotary engine and made it work after all the other manufacturers including General Motors and Mercedes-Benz tried and failed.
Basically Skyactiv involves non-turbo gasoline engines and applying steps such as pistons with hollowed tops for better gas ignition, 13:1 compression ratio, lighter internal parts, reduced friction and the Formula One four-into-two-into-one exhaust system. New six-speed manual and automatic transmissions are dramatically lighter. Part of the Technology Package on the Mazda 6 GT is Mazda’s capacitor-based brake energy regeneration system called i-ELOOP.

Mazda claims i-ELOOP is the world’s first capacitor-based brake energy regeneration system to provide power to the electrical mechanisms in a vehicle. A capacitor is not a battery that uses chemical reaction to generate electricity. A capacitor is a brake energy regeneration system that converts a vehicle’s kinetic energy into electricity as the car decelerates. The electricity is then stored for later use. It can be used to power the headlights, climate control, audio system, or any other electrical equipment. This reduces the need for the engine to burn extra fuel in order to generate electricity, and thereby improves fuel economy.

The Mazda 6 is powered by a 2.5-litre, DOHC inline four-cylinder producing 184 hp and 184 lb/ft of torque with a choice of six-speed manual or automatic transmission. You’d think the Mazda 6 might be down on power compared to other mid-size sedans, but not so.

The gearing on the automatic is nicely matched to the torque curve of the engine and boots down smoothly when power is needed for passing or entering the highway from the on-ramp. When an extra burst is needed, there is a “Power” button beside the shift lever that changes engine and transmission mapping.

Besides great mileage and good performance, you also get great looks in the Mazda 6. It is the best full production example of Mazda’s KODO design language. Based on the Shinari concept, which the Mazda 6 closely resembles, there is a long, flowing hood with prominent front fenders and a refreshing lack of body-side character lines that results in a look that visually extends the length of the car.

Mazda SHINARI Concept
The interior is typical Mazda with all main controls and gauges grouped tightly in front of the driver’s view ahead.